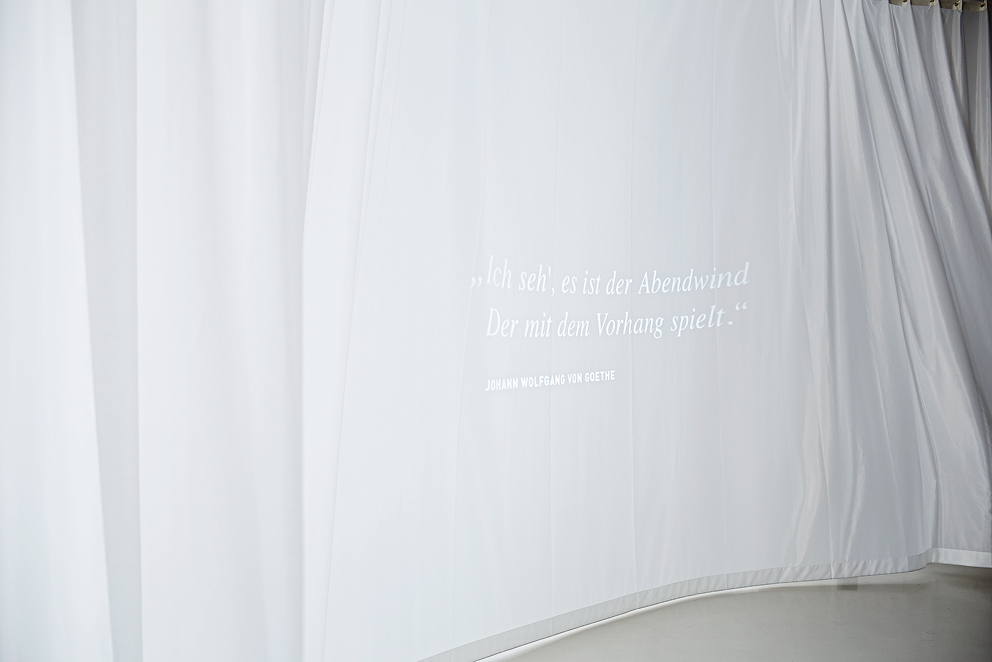 The visitor is accompanied by a quote from Goethe into the exhibition. Photo © Oliver Jung

Hang on a minute, umbrellas on the ceiling? At arm’s reach? And none of them got stolen? Not so long ago it was raining, relentlessly, day in and day out, and umbrellas – along with wellie boots and sand sacks – became Bavaria’s most sought after items in spring 2013. Now visitors to Augsburg’s Textil- und Industriemuseum can find out about the historical significance of umbrellas, along with other textile products, and how they are used in architecture.

The accompanying text to the exhibition refers to the umbrella as a “portable shield”, which “for a long time was used to emphasize the stateliness of important people, such as religious leaders or kings.” Today this meaning has almost entirely been lost, and the umbrella has become a useful everyday object, as we only know too well. The exhibition does not stop at portable umbrellas, however, but also shows permanent constructions, which use textiles as protection, such as the huge awning that was set up in the “Shanghai International Circuit”, offering an impressive example of the scale on which textiles could be put to use in architecture. Perhaps this all sounds very straight down the line, rather pedantic, and potentially even a little naïve? Well perhaps. But when outside climate change continues to knock us around, there’s something to be said for a little order in the home.

“Textile Architecture” takes us from ancient temple curtains right to the modern day. The exhibition is based on Sylvie Krügler’s eponymous book, published in 2009 by Jovis Publishers. Krüger not only curated the exhibition, but also teamed up with architect Andreas Ferstl (Muck Petzet Architects) to formulate and implement the – wait for it! – textile design.

Krüger chose five concepts to subdivide different spaces, which flow into one another as you walk around the exhibition. Along with the above-mentioned “umbrella” section, visitors will get to enter the following realms: “curtain”, “ceiling”, “tent” and “bubble”. There is no direction as to where one should begin. This, according to curator Sylvie Krüger, allows visitors to see “the development of different construction principles, moving from the vertical (curtains) to the horizontal (ceiling and umbrella) to the three-dimensional (tent and bubble). This is how the themes follow on from one another.”

The Textil- und Industriemuseum is accommodated in the imposing building of what used to be the worsted spinning mill in Augsburg’s textile quarter. While the permanent exhibition on the ground floor displays historical weaving looms and state-of-the-art, high-tech machines, upstairs on the first floor visitors will get to immerse themselves in the worlds of textile architecture. The different exhibition spaces displaying design models, films, and above all photographs, each with their own explanatory text, are separated by soft, undulating fabrics that greet visitors as they enter the show. Quiet, tucked away spaces allow for a comfortable and private passage through the world of materials. There is none of that intimidation or disorientation that often accompanies exhibitions of this size.

The “curtain” room is draped in blue. The main focus here is on partitions, which already in ancient times served to separate holy and unholy spaces. Also on show here are curtains and four-poster beds. Next, the “ceiling” room, where orange is the predominant color. Here we learn about the history and use of awnings, sun shields, veils and canopies. There is a sense, though, that photos and models can only take the visitor so far, and it would be nice to see some originals. Such as Japanese rice paper partitions, which Krüger writes about in her book. Or, at least, an old fashioned marquee, suffused with sunshine…

Getting in the bubble

Next is the “tent” section, which unfolds the history of the tent from the ninth century right up to Frei Otto’s membrane constructions. Among the special interactive zones that encourage visitors to feel the fabrics and listen to the sounds they make, the “bubble” room is the most exciting space within a space: Tucked away in a remote corner of the exhibition is a gigantic white fabric structure blown up to 3.5 meters high and with a surface area of eight square meters. On display here are the original designs for Beijing’s aquatic center, the “Water Cube”, and a photo of Munich’s “Allianz Arena” football stadium, along with transparent, cellophane material to touch and feel: As we know, the translucent skin made of membrane cushion can be illuminated in different colors. It is in this room that the theme of the exhibition fully comes into its own; here where we get to see ideal living spaces, utopias from the 1960s up to the present day. Lightweight, insulating and transparent, bubbles have become a particularly interesting structure within modern architecture.

Since the publication of her book, Sylvie Krüger has given a whole host of talks on temporary and flexible architecture, a hot topic at present. In recent years, innovative textiles have been increasingly employed as variable ceiling constructions in the construction of sports stadiums. Curtains are likewise very popular for interiors, for example to hide elements or to dampen noise. Aside from this textile designer Krüger works with textiles in space and has developed specific solutions relating to how one might divide a room, so as to optimize its acoustics, to maintain its privacy or to protect it from the sun. “In contrast to static architecture textiles are flexible and can be used on a temporary basis, which makes them very appealing for architecture,” she explains.

When textiles are used in architecture today it is rarely for aesthetic reasons, but more about being able to find different ways of using the same space. According to Krüger, they have potential for much more. Textiles, for example, “can be fitted with sensors to detect what goes on around them and respond to touch, temperature or changes in lighting. This revolutionizes architecture away from being a static presence and to one which responds to the person within it.” This is already being put into practice in the exhibition, where a pathway is bordered with a yellow fabric which sinks as you step on it, rather reminiscent of a bouncy castle. A treat, we can imagine, for the countless groups of schoolchildren taken to the exhibition on class trips.

Raindrops falling on the bubble

Having experienced the “bubble” we wonder whether we can genuinely envisage building an inhabitable house entirely out of textiles in the foreseeable future. After all, there are plentiful examples to prove that, bit by bit, architecture is embracing textiles, and with that becoming more flexible. To what extent such buildings are protected from the elements, particularly in Northern countries, remains to be seen. Anyone who has been living for generations with a solid roof over their heads would be bound to be a little concerned, at the very least would need some psychological preparation. At the moment, however, it has to be said that the prospect of rain and snow with a bubble for a home is not entirely reassuring.

There could be some beauty in it, however. As the little, wide-eyed “King December” so beautifully wonders in Axel Hacke’s great book of the same name: “Why do you want to look behind the walls, instead of imagining what might be behind them?” Or, perhaps, after this exhibition, the question might even be “Walls? Which walls…?” 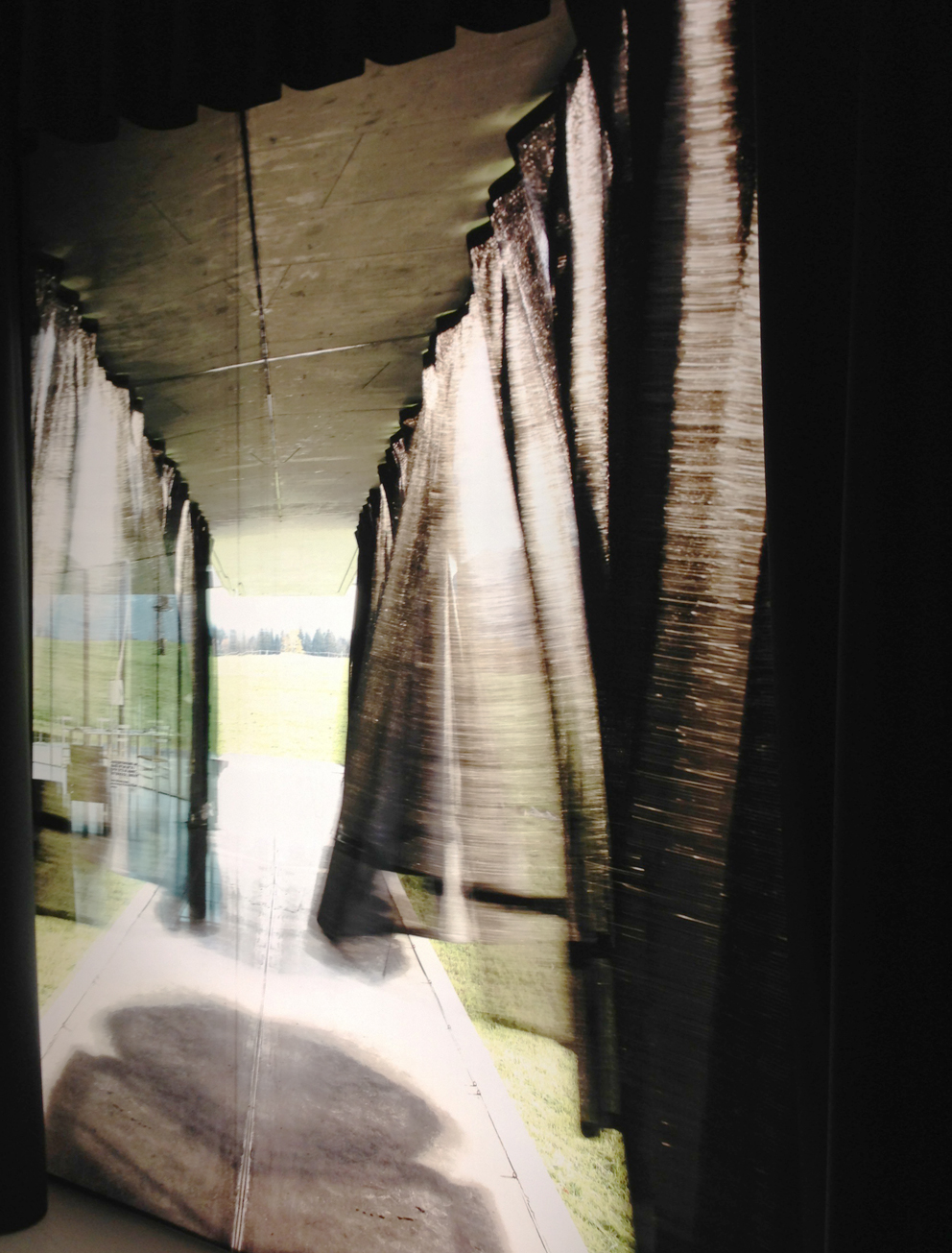 Curtain up, stage is set - the exhibition is separated with fabric into several rooms. Photo © Oliver Jung 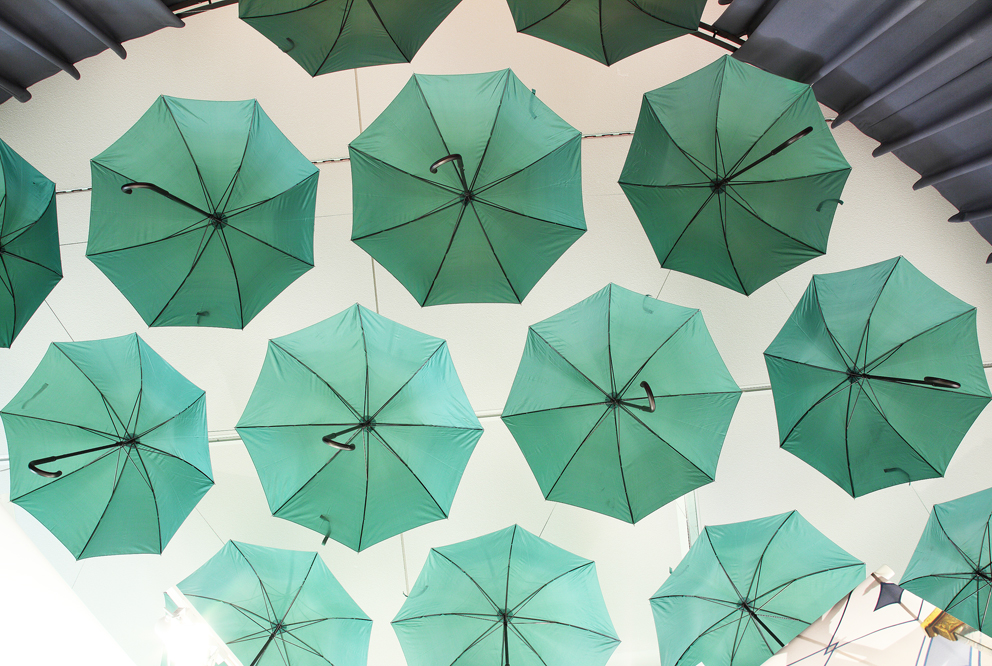 They hang seductively from the ceiling - the umbrellas, popular subject in the spring of 2013. Photo © Oliver Jung 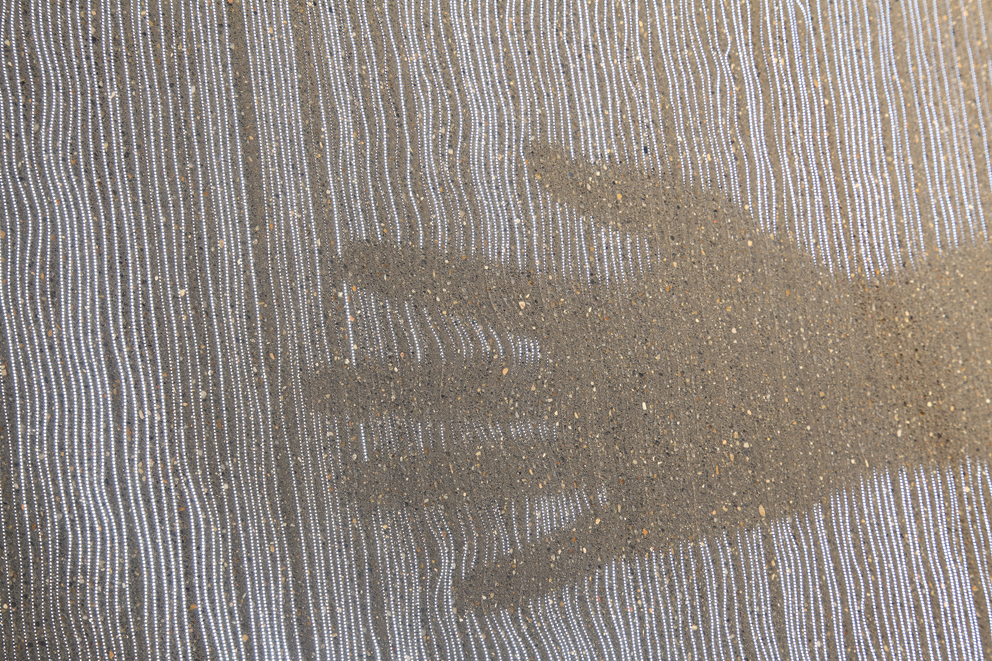 In close contact with a variety of textile materials. Photo © Oliver Jung 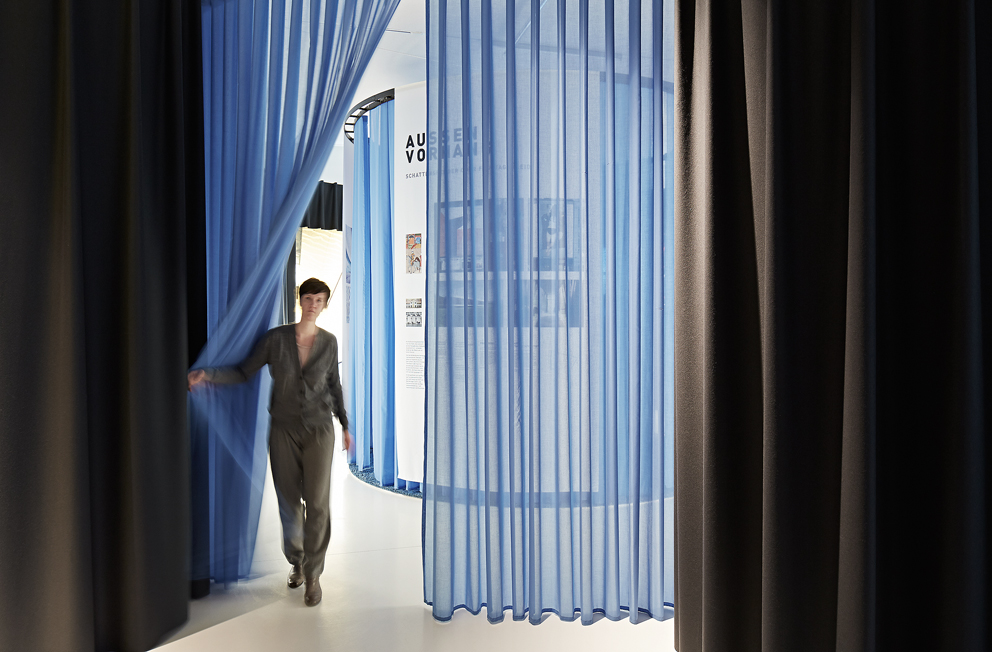 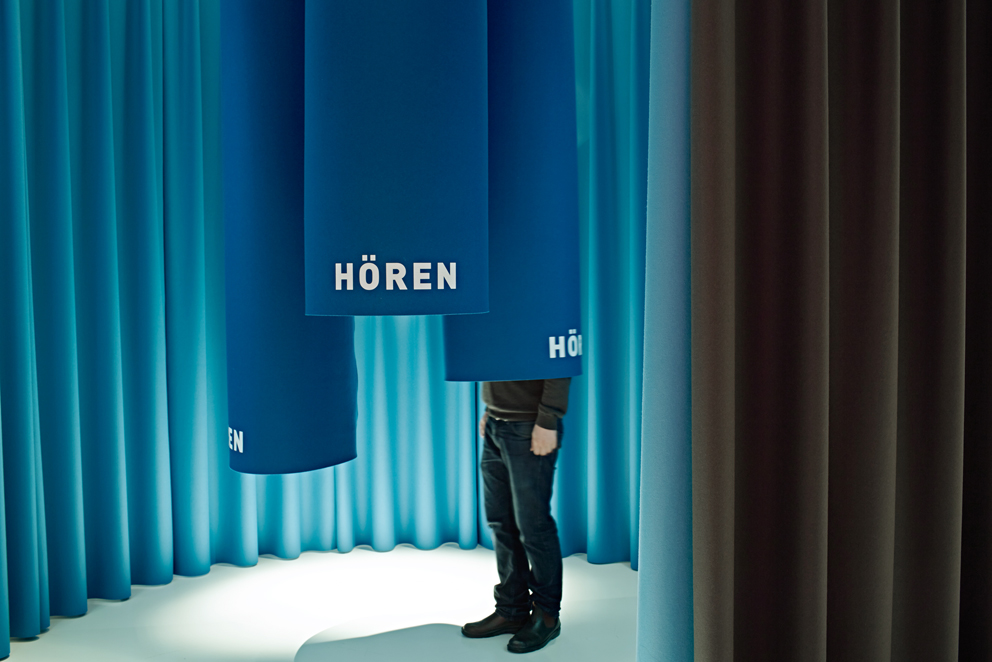 How does it sound like listening to a radio play in a felt tunnel? hoto © Oliver Jung 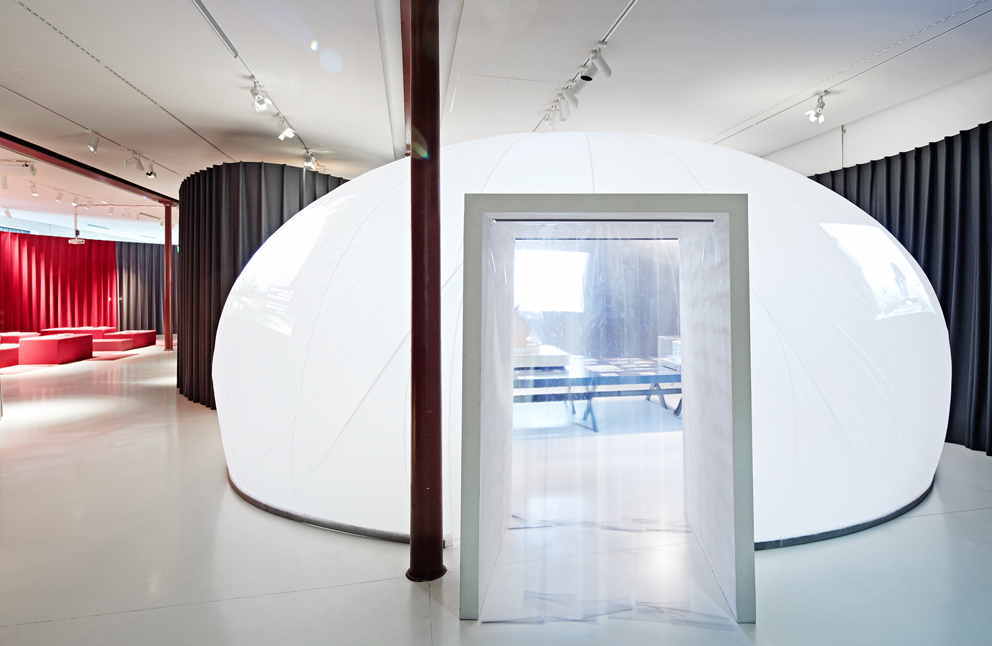 Here the wind blows – the bubble, an example of textile architecture of tomorrow. Photo © Oliver Jung 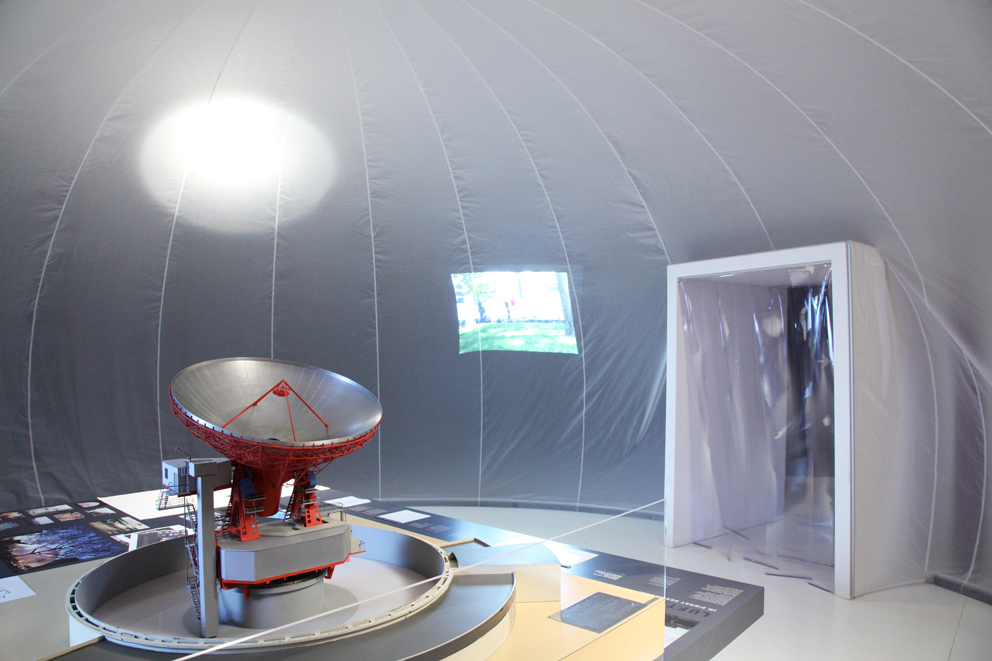 The bubble is flexible and rapidly degradable. On the inside blows a light breeze. Photo © Oliver Jung 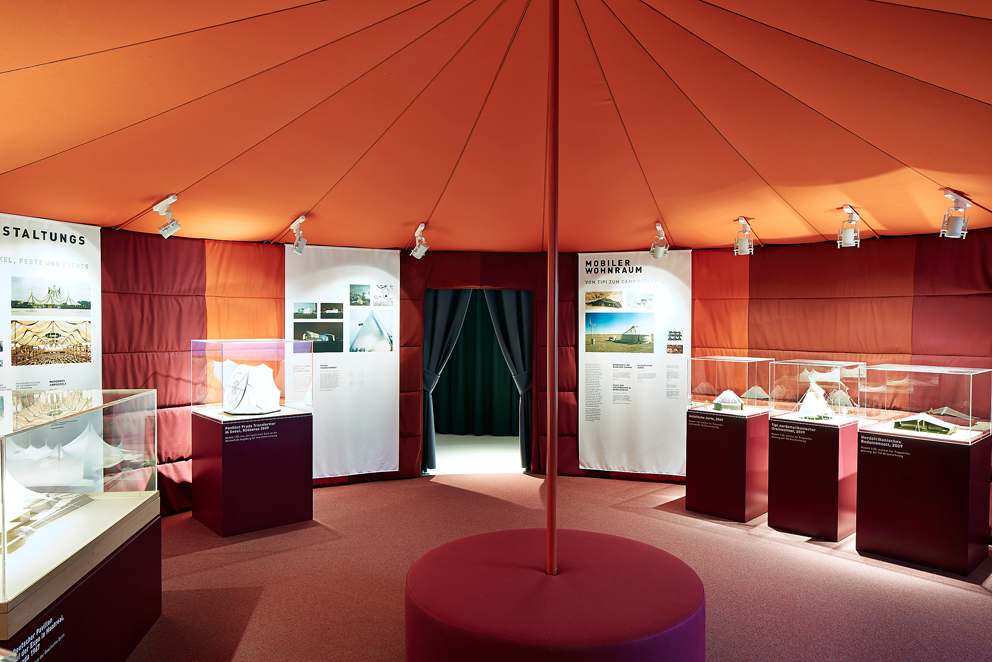 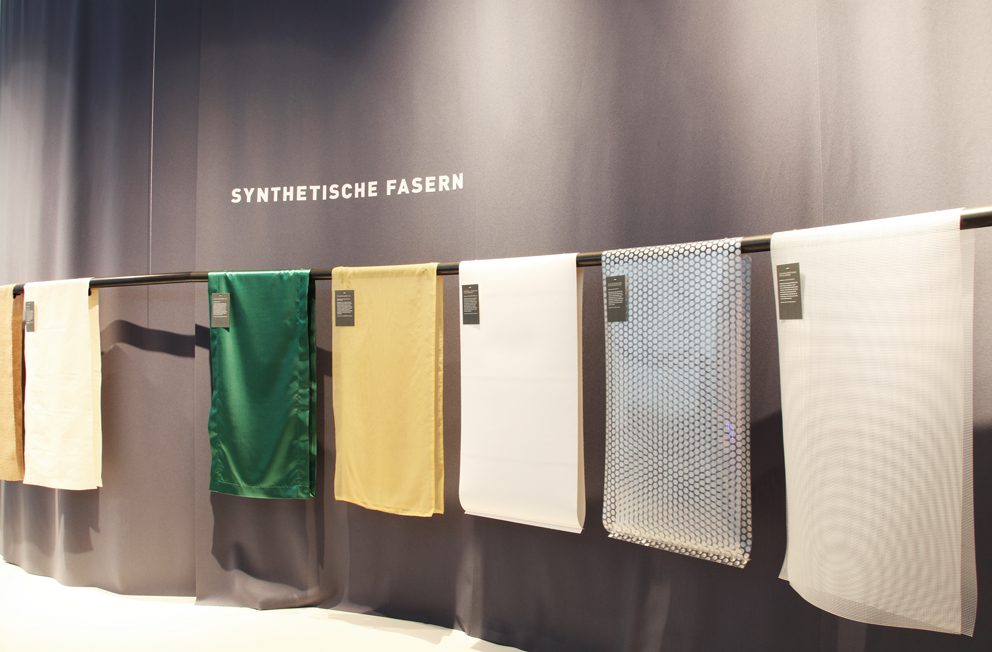 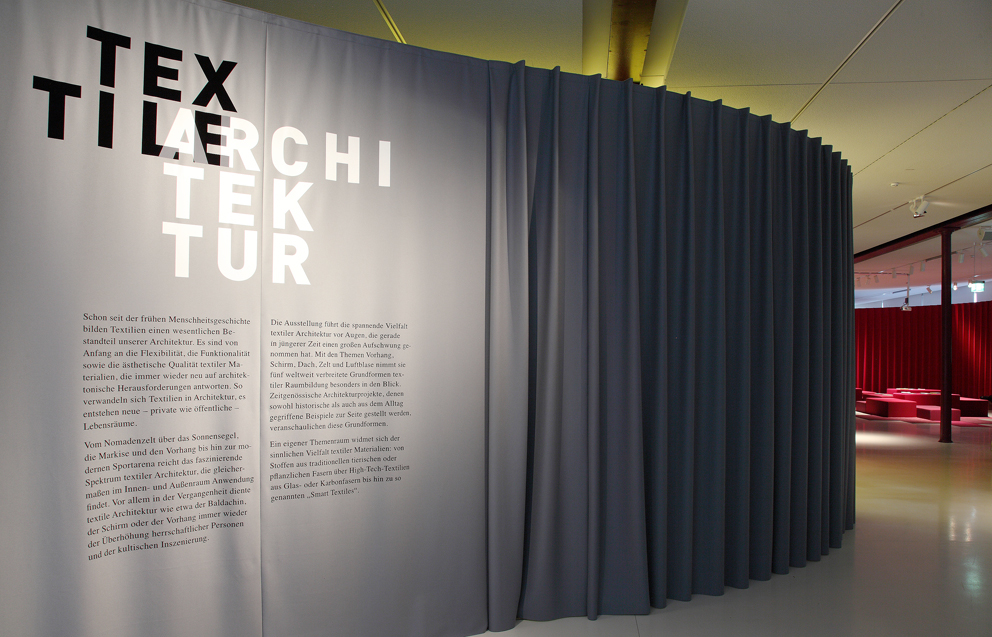 The entrance to the exhibition seems like a movie theater. Photo © Oliver Jung 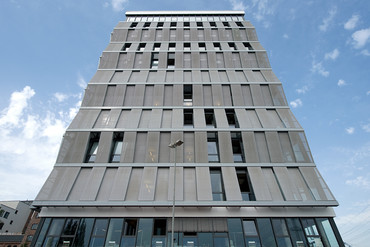 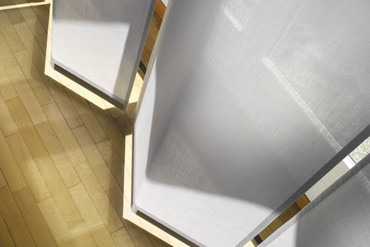 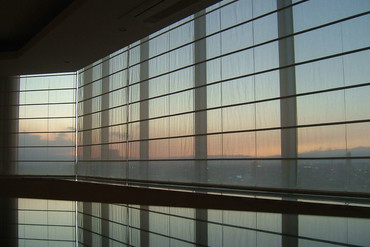 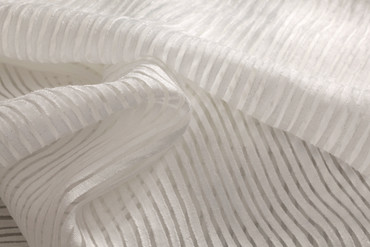 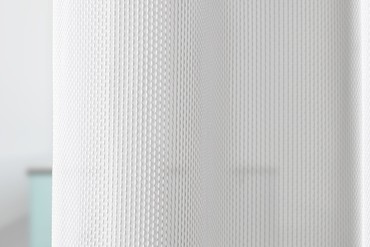