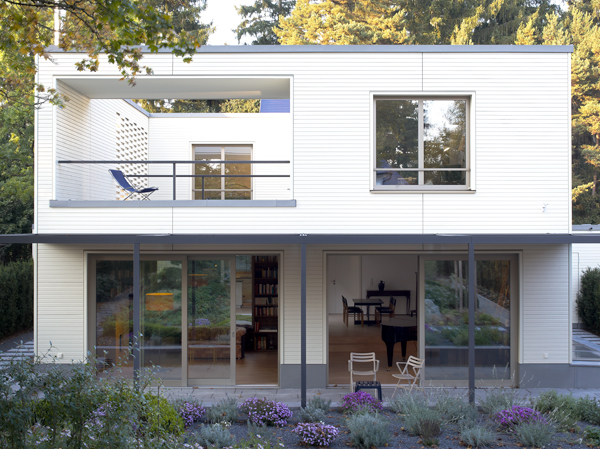 It is not only skeptics of progress and hysterics who are pointing up energy-related shortcomings in the way we modernize our buildings. Can we really talk of a “rejuvenation”? The subsequent addition of new insulation makes but few buildings more attractive, clearer and better than their original design foresaw. The texture of existing buildings, their details, doors, and window jambs vanish behind an often questionable, distorting reinterpretation. Twentieth-century housing estates in particular are rapidly being turned into domains populated with architectural zombies, belonging neither to the past nor the future.

The “disimprovement” of existing architecture with insulation is a growth market with an at times baffling side-benefit. The increased fire risk of essentially flame-retardant polystyrene insulating panels sparked a right old controversy. And the problem of higher algal growth on insulated exterior walls and mold in insulated buildings has long been known. But the new insulation dilemma is avian: woodpeckers are notorious new users of renovated façades. They like to nest in the thick layers of synthetic material. The hollow sound of the insulation added to the facades reminds them of the sound of rotten trees. And repairing damaged insulated façades is a tricky matter, because the birds prefer to return to their old nesting sites.

So what is useful, and what is not? The German Energy Agency (dena), one of the many public-private enterprises committed to promoting energy efficiency, talks of “energy refurbishment myths”. In truth the material is highly complex, if only because in each individual case building physics are at play, the details of which by no means all planners are familiar with and hardly any developers. But what is barely disputed is that in private households heating and cooling are responsible for a significant share of the primary energy consumption, of CO2 emissions and of running costs. So how do we get a handle on all three of these? How can we come up with aesthetically and economically suitable solutions?

Getting to the heart of things

Savings made by going for new construction materials or technology frequently rest on mathematical assumptions. Values achieved by particular components can differ, depending on how they interact in the building in question or with the habits of its users. Now, a series of new pilot projects aims to demonstrate the actual effectiveness of various approaches and enable their comparison by means of measured, not calculated values.

The “settler houses” in the south of the Elbe island Wilhelmsburg in Hamburg were built in the 1950s. They are homes, but with no basement and built using the simple materials available in the post-War years. In addition to living space, they offered their users the opportunity to plant vegetables in the garden and rear small animals in the adjoining barn. The buildings no longer meet modern-day requirements, not only in terms of heat loss, but above all as regards layout and comfort, making them a practically ideal subject for an experimental building conversion project. The research project “LichtAktiv Haus” being realized here enjoys the support of the Federal Ministry of Transport, Building and Urban Development as well as the Fraunhofer Institute for Building Physics and other institutions. Window manufacturer Velux bought a semi-detached house and added the project to its series of European experimental buildings bearing the motto “Model Home 2020”.

The demonstration project foresaw a complete conversion, and as such ambitious goals were set, such as the use of environmentally-friendly construction materials and CO2 neutrality. The design was penned by Manfred Hegger and Katharina Fey from Darmstadt University of Technology (TU Darmstadt). The main building was completely gutted and moderately insulated. The small dark rooms disappeared. Now, a spacious daylight-oriented layout (Peter Andres, Hamburg) means that even in the gloomy Hamburg winter users can largely forgo artificial lighting during the day. The adjoining barn was demolished and replaced by a well-insulated, elongated, single-story extension (a timber-frame construction) with a south-slanting roof. It incorporates the entire housing technology, offers space for solar thermal energy facilities and photovoltaic cells on the roof and a large open living and kitchen area underneath. The original idea of self-sufficiency with food has evolved into the new possibility of a house generating the energy it requires largely by itself.

Although private developers are hardly likely to be able to finance so many and such carefully executed measures for a comparatively modest building with 132 square meters of heated floor space, the project does follow a number of realistic basic assumptions. Instead of a complex heat recovery system, the planners opted for automatic window controls which ensure rapid air exchange. The integrated air-to-water heat pump incorporating solar energy supplies heat for central heating and hot water all year round. The solar energy yield ensures that the low additional energy requirement can be covered by regenerative energies.
The project forms part of the International Architecture Exhibition (IBA) 2013 and the house will be occupied by a test family of four for two years, during which time they will keep a blog on their activities and experiences with the “LichtAktiv Haus”. Moreover, energy and heat consumption will be documented, analyzed by the project’s scientific partners and published.

Another pilot project is currently under construction in the Dortmund district of Wambel, near the racecourse, namely “Dortmunder Stadthäuser”. The three terraced gabled houses in the middle of a somewhat bland 1950s residential estate with the typical rows of houses should be finished in the spring. The developer, Dortmunder Gesellschaft für Wohnen (DOGEWO), has already let them.

The “10 Principles of Urbanism Today”, published in 2010 by the German Institute for Urbanism (DIS) at TU Dortmund University headed by Christoph Mäckler, state that the sustainability of the urban environment is achieved by “comprehensive and solid permanence and urbanity”. Necessary energy-saving measures must not be limited to “oil-based heat insulation systems” and the odd low-energy house, for these only create additional environmental problems.

Christoph Mäckler conceived and designed the research buildings together with architects Martin Cors from Dortmund and Imke Woelk from Berlin. Their long-term goal is “permanent energy-saving architecture”. As an element of aesthetic sustainability, terraced houses for research purposes are to enable “lasting recognition and regard”. The project centers on a comparison of different construction methods and materials in the roof construction and wall structure of the three buildings, scientifically backed-up by measurements over several heating periods.

Three different Poroton blocks are being installed. The first house features a solid block filled with mineral perlite, which in effect inserts the insulation into the building material. In the second house blocks are being used that are ground flat on both sides in order to minimize the horizontal joints – and therefore heat loss – between the blocks. The third house features thinner bricks that are therefore coupled to a thermal insulation composite system. The project seeks to test the hypothesis that wall structures made of lasting materials are more eco-friendly than the insulating layers and heat insulation plaster systems commonly used today. A bus system is used to collect the data and can also be used by residents to control the housing technology. To supply energy to the three houses, a micro power-&-heat cogeneration unit has been installed in a joint technical facilities building; each of the 115 to 120-square-meter houses also has its own heating stove.

Not a model project, but an ambitious low-energy house with two stories and 262 square meters of living space was built in 2011 as a wooden frame construction in the Trudering district of Munich. The design by Munich-based “4Architekten” (Agnes Förster, Susanna Knopp, Jan Kurz and Markus Wassmer) consists of a courtyard house wrapped around a Japanese-style interior courtyard. A large living room, lowered by two steps, faces the garden at the rear of the building. The 40-centimeter-thick timber-frame wall features 22-centimeter-thick thermal insulation made of renewable raw materials. Solar thermal energy is used to heat water and help heat the house, a bivalent heat pump heats and cools the building, and a ventilation system ensures the interior air is hygienic. Due to limited space and in order to preserve the old trees on the site, geothermal energy baskets were used instead of deep geothermal wells or horizontal geothermal collectors. “We would do everything again in exactly the same way; we have reached our objectives 100%”, wrote the developer in the dena “Efficient House” database.

Power plant on a slope

Architekten Berschneider+Berschneider likewise completed their net plus energy house in Leonberg in 2011. The architects consider their design a “window to the landscape”, a technical structure that stands in deliberate contrast to the surrounding nature. The elevated position of the building prevents prying eyes looking in from the street passing by to the south. What is unusual in this case is that the electricity, which is generated by the building’s own photovoltaic cells, is only partially fed into the grid, but is directly used to power the heat pump, ventilation system, household appliances, lighting and to charge electric vehicles. The photovoltaic plant with a peak output of 15 kilowatts produces an annual surplus of around 50% in relation to the building’s overall electricity requirements. An electric heat pump with three vertical probes is used to heat the rooms of this south-facing house, which has been built on an incline, as well as providing its inhabitants with hot water. The central building control system monitors control of the lighting, temperature and sun protection to deliver a high degree of energy efficiency without compromising on an optimum interior climate. The “Aktivhaus” energy concept is the brainchild of Prof. Norbert Fisch (EGS-plan GmbH, Stuttgart), whose Institute for Building Services and Energy Design is in charge of monitoring and operation optimization at Braunschweig University of Technology.

Houses that generate their own energy and even produce a surplus will continue to be the architectural exceptions for some time to come. These projects are only able to hold their own at present with great commitment on the part of everyone involved, developers, architects and specialist planners, and with the support of research funding, subsidies and sponsors.
While the German scene is currently still greatly benefiting from private and public lighthouse projects, Switzerland is already seeing regular construction projects such as the seven-story Badenerstrasse residential complex in Zurich (Pool Architekten), with 54 one and two-bedroom apartments. This is down to local authorities’ commitment, brought about by a referendum, to a “2,000-watt society”, in which in the foreseeable future per capita energy consumption is to be cut to a third of what it is today. This target likewise leads to new paths in the construction and property markets, not to mention the unleashing of creative and entrepreneurial imagination. 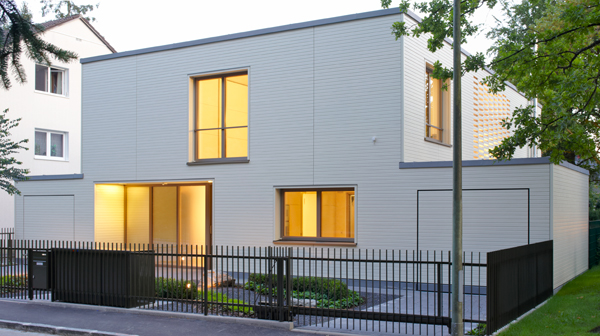 The design of "4 Architects" is grouped as a courtyard house around a Japanese-style courtyard. Photo © Jens Schnabel 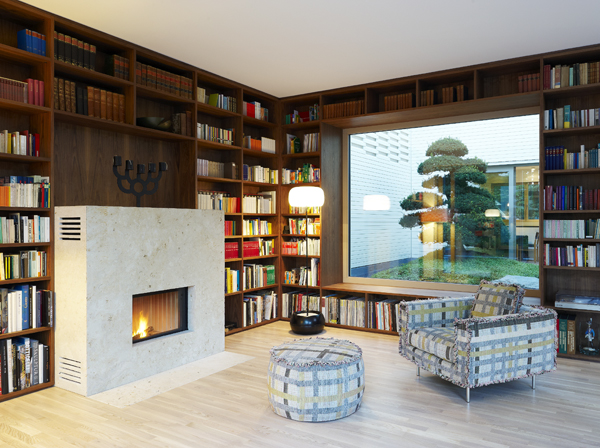 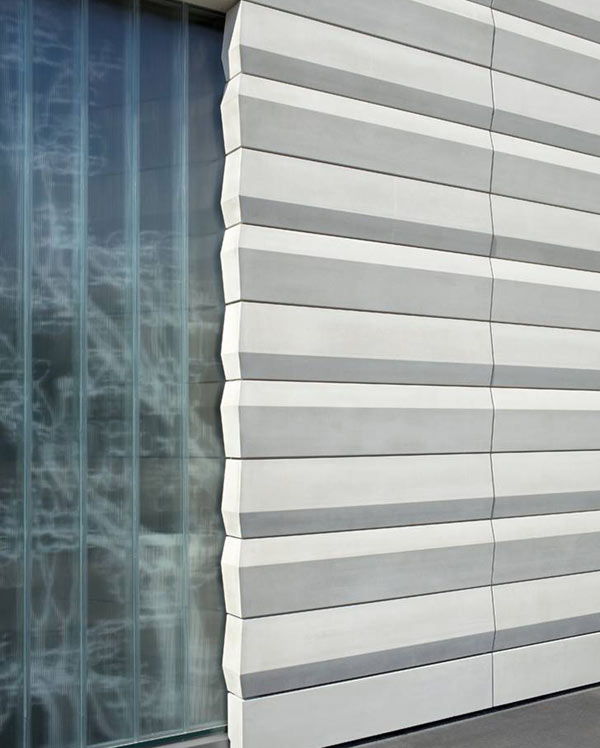 The building is a timber with ventilated façade made ​​of extruded glass fiber reinforced concrete. Photo © Giuseppe Micciché 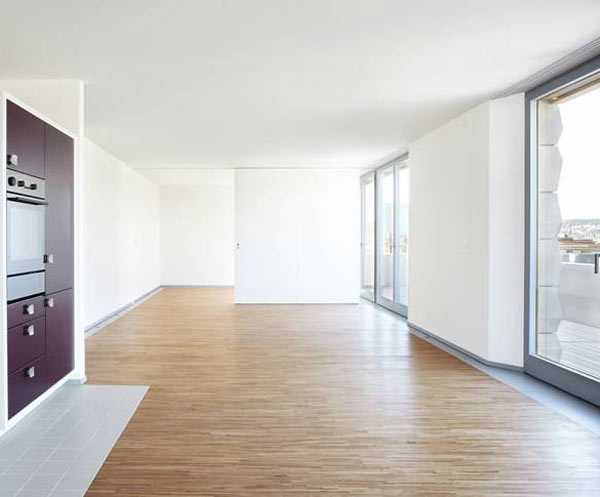 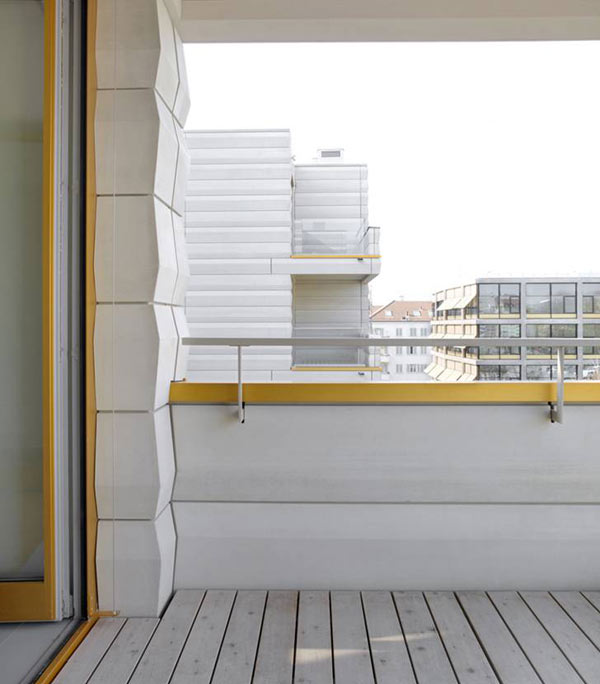 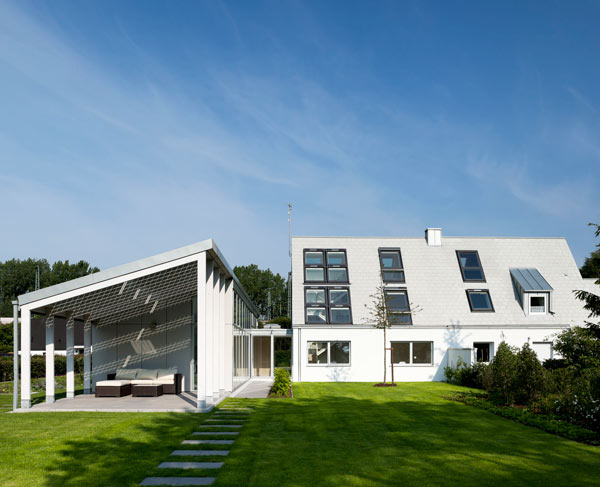