"A serious architect who wants to create good architecture must start from the inside, not the outside. The arrangement of the individual furnishings and fittings determines the partitioning of the living space and therefore also dictates the placement of doors and windows. All this together shapes the apartments, and the sum of the apartments shapes the building. The facade basically has to adapt around the various floor plans from which it is constituted." This statement not only describes Dominioni's deeply humanistic character, but also underlines the fact that his approach distances itself from any kind of prefabricated, formal solution and, which is far more crucial, that it moves beyond all "ideological agendas". Dominioni identifies strongly with the requirements of the users, which is why he also designs a house as a "bespoke suit". Caccia Dominioni's approach seems to produce a dense and inexhaustible promenade of different living arrangements. His work belongs to the Modern Age, yet he is also able to listen to history. He does not attempt to push through a revival or to emulate individual styles. On the one hand his architecture may appear to be the product of his work as a branch outsider, yet on the other it is precisely because of its uniqueness that it sets new precedents.

It should therefore come as no surprise that Luigi Caccia Dominioni's work also been of seminal influence in the area of interior furnishings. For instance, his unsurpassable "Catalina" armchair from 1958 provides a groundbreaking treatment for metal structures with its three metal rods and flat, curved metal strips, one of which twists like a piece of fabric to form an elegant backrest - an approach that Tobia Scarpa also experimented with in 1960 with his "Vanessa" bed. Similarly, the building by architects Antonio Citterio and Patricia Viel in Brera, which is now home to the Bulgari hotel, was doubtless influenced by the reception of the perfect composition of the "Casa Caccia Dominioni" on Piazza Sant'Ambrogio 16 in Milan, since it evidently copies its rhythm and curves. The later was the first architectural project on an urban scale by the then thirty-year-old Caccia in the city centre. Furthermore, the architectural theory of architect Cino Zucchi is an academic homage to the "Caccia Style" and makes reference to features such as the seductive irregularities and brown hues of the building facades on Via Nievo (1956) and Piazza Carbonari (1960). And the recently built houses and apartments on Portello seem to bring to life a completely new quality of Milanese residential architecture.

Without a doubt, the entire work of Luigi Caccia Dominioni is based on the principle of synthesis. The design of the furnishings and fittings is always in close harmony with the structure of the interior. Thus, for example, the mosaics by Francesco Somaini are an integral component of the overall composition of the building, which is seen as a complex organism. Caccia has explained on several occasions that he primarily sees himself someone who designs whole complexes. The draft of the plan, which in his logic follows the movements of people, gives rise to considerations that are channelled into the facade design. A further spin-off of this process are ideas for the design of objects, furnishings, accessories, lamps, handles and doors - designs that received the Compasso d'Oro award in 1985. Such ideas embrace a permanent exchange between the private and public spheres. These two areas are both tackled with equal intensity, whereby particular attention is given to the spatial quality of the axes and transitions, to corridors in private apartments, to public galleries in large buildings, to stairways and linking elements. One example of the latter is the link, built in 1968-70, between the San Fedele church and the Chase Manhattan Bank of the BBPR in the centre of Milan - which is pure genius.

The stairs in Caccia's buildings not only function as a more or less natural, vertical partitioning element, but also act as the central hub - usually in an oval or elliptical form - around which the entire architectural organism is designed. "Yes, I think people essentially move in meandering lines," states Caccia, adding: "They don't go back and forth in straight lines like a shuttle, but move in circular, oval or meandering lines." This form of human movement forms the matrix for Caccia's architectural designs.

Since his career began after graduating in 1936, Luigi Caccia Dominioni has often been involved in object design - an involvement that was sometimes due to the objective conditions of his surroundings and sometimes to the possibilities for work that arose. Such objects include the famous "Phonola 548" transistor radio which he co-designed with brothers Livio and Pier Giacomo Castigioni with whom he shared a studio for several years. Due to its semantic intensity and many new elements, this radio is seen today as one of the fist significant objects of Italian Design.

When designing the "Phonola 548", Luigi Caccia Dominioni replaced the traditional housing for the bedside table with a newly shaped solution expressing "connection and congruity between content and container." As Giuseppe Pagano approvingly notes, this laid "the foundation for the functionally designed object." Yet the product range of "functional items of furniture" possibly did not go far enough for Caccia. To meet the demand for the furniture and products he designed and restored, he teamed up with Ignazio Gardella, Corrado Corradi Dell'Acqua, Maria Teresa and Franca Tosi in 1947 to co-found Italy's first business for the production and sale of objects and items of furniture: Azucena.

The Italian company Azucena was not so much a range of modern furniture with avant-garde appeal than an assortment of isolated design items that emerged after a long design phase and were intended to furnish the interiors of the new buildings. It was only in a second phase that the collection was wrought into a modern range of furnishings, that - fifty years on - now certainly has to be seen as an important chapter of Italian design history. It is immediately apparent from the collection that it had more than one root and was almost always designed around some concept of architectural space.

Experimentation, elegance, scale, essential nature and inventiveness: these concepts characterise the items that Azucena designed - always working towards an interior design concept to which the items relate in terms of their conceptual and objective intensity. "Azucena", states Marco Romanelli, "is a symbol for a certain type of project development which is characteristic of improved, Italian design - a project development which is always rooted in the dimension of interior design or understands this as its core. It is a control possibility and a fantasy which simultaneously lead from the environment to the object and from the object to the environment."

Caccia has designed more than two hundred and forty objects, which, even though they may have been produced for specific purposes and made to deadlines as parts of individual projects, were always intended for reproduction and mass production. Although he likes to describe himself as "Baroque" - qualifying this as being "in the sense that Baroque is in its own way the most rigorous, the strongest and the most urban of all styles, and even motorway junctions and vortices in rivers are Baroque by their very nature, and look how beautiful and how functional they are" - for Luigi Caccia Dominioni design is primarily characterised by simplicity. "Everything that is not absolutely necessary must be stripped away and the object must be reduced to its bare essentials. It is therefore about designing the object so that it is suited to its intended purpose and only then, perhaps, adding anything; but within limits please." 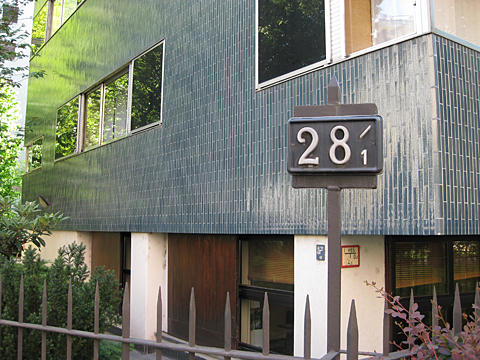 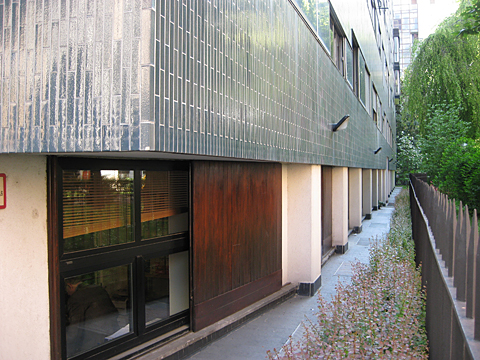 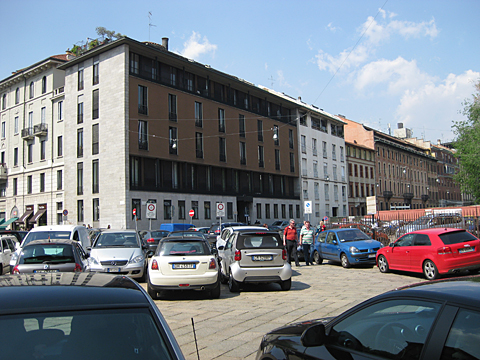 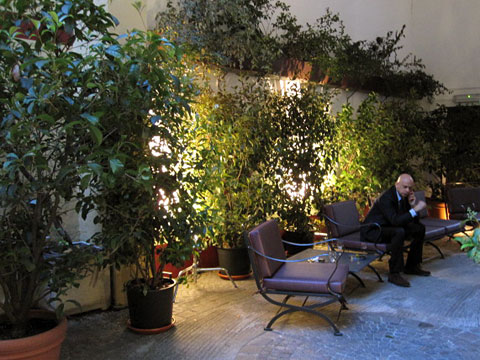 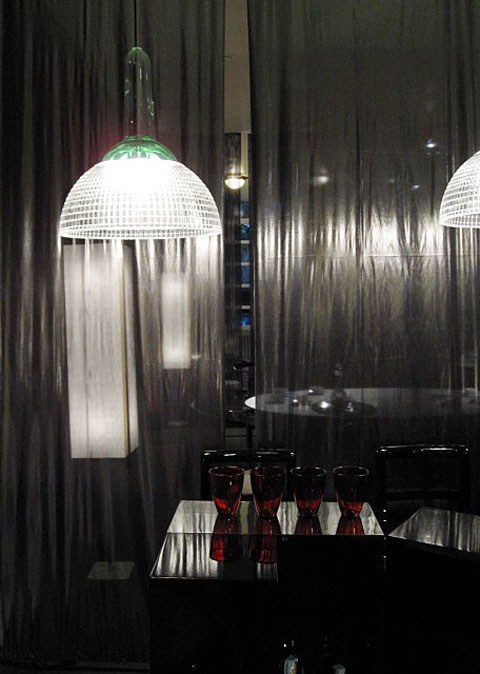 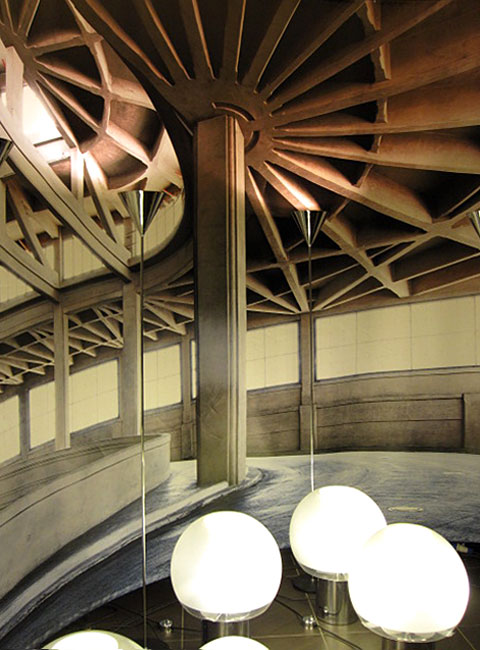 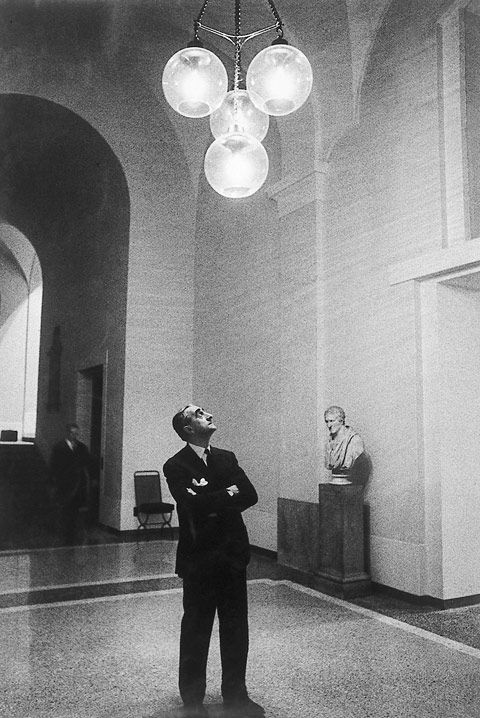 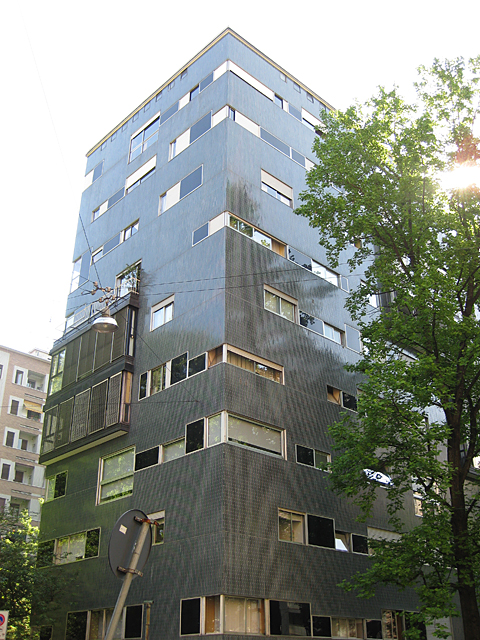 Residence by Dominioni Via Ippolito Nievo 28 in Milan, 1955, photo: © Stylepark 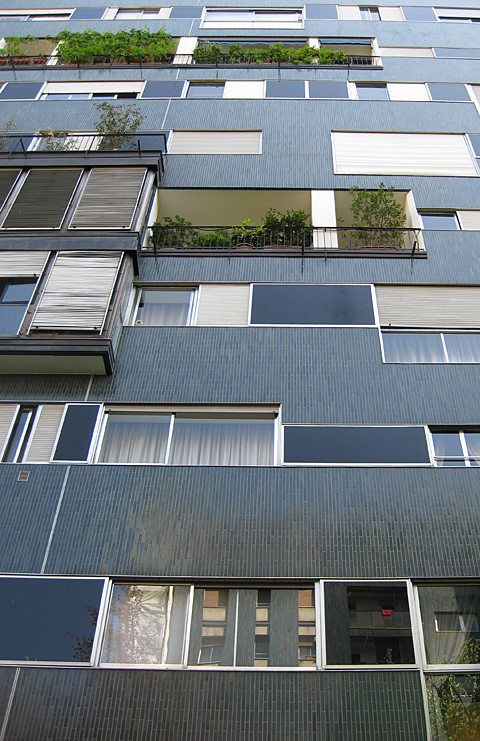 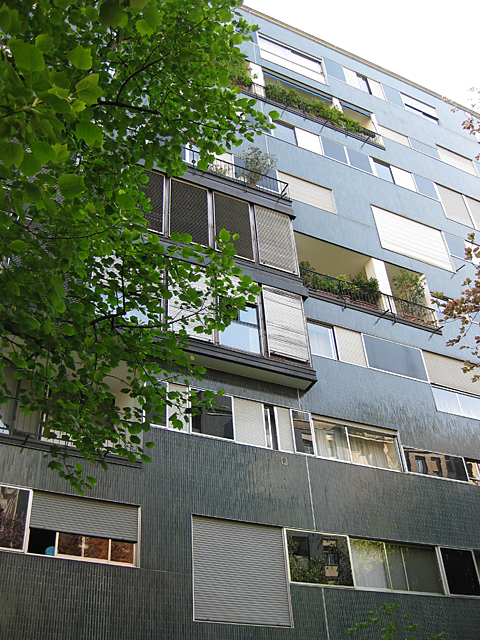 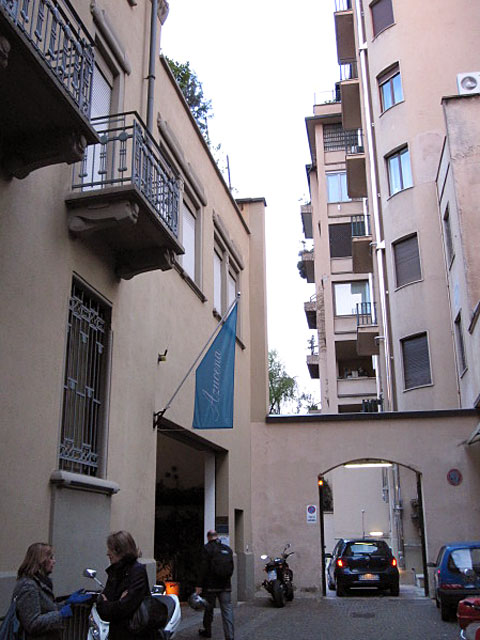 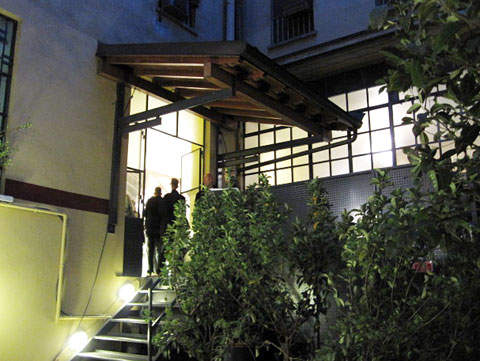 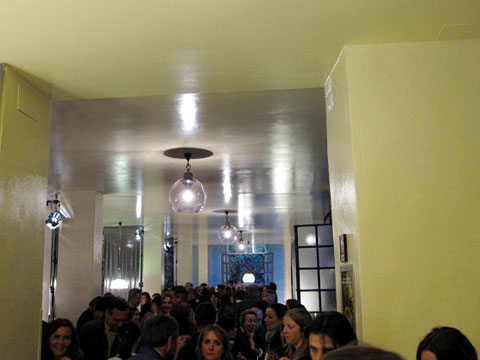 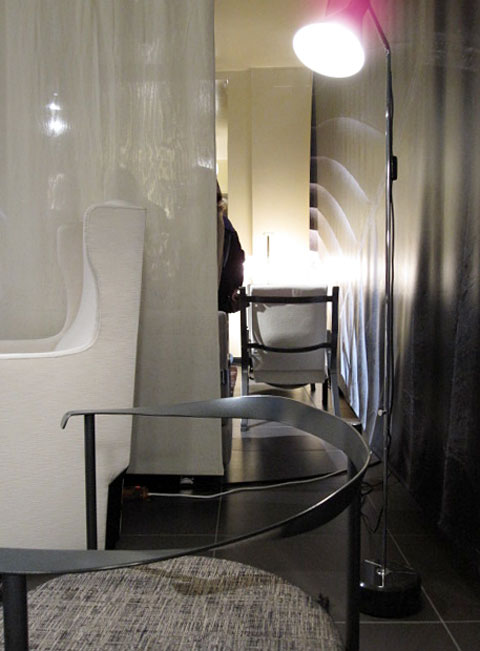 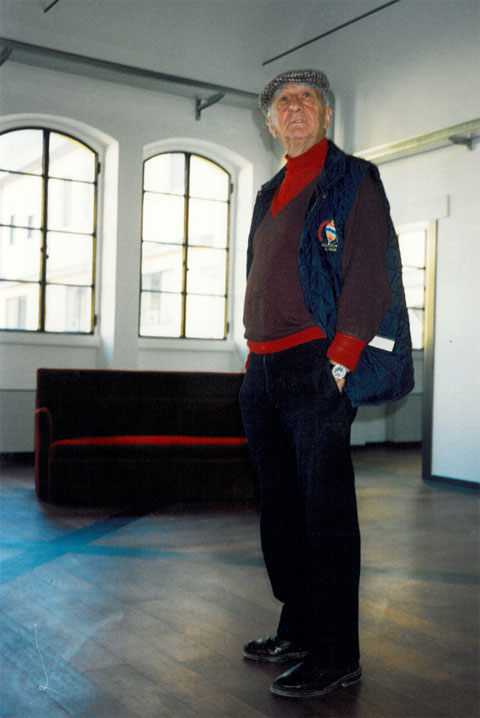 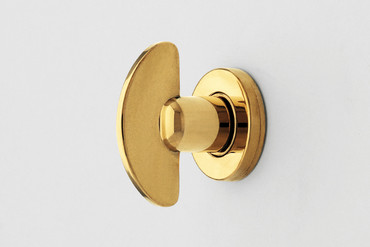