In questions of clothing, Adolf Loos knew no compromises and was truly one of the leading aesthetes of the turn of the 20th century. In an essay on "Men's Fashion" he stated quite unequivocally: "Being well-dressed. Something surely everyone wants to be. Our century has abolished the former dress codes and conventions and now everyone has the right to dress like a king. We can consider how many members of a country's population make use of this achievement on behalf of liberty as a yardstick to gauge how cultured a country is." Adolf Loos believed that not only did clothes make the man, but the way people dressed revealed a lot about the state of a society.

An unforgettable example of the culture of dressing well: the interior of Knize, Viennese bespoke tailors: The clients, and they even included Arnold Schönberg among others, were certainly able to feel like kings while being measured. Swedish granite, gleaming cherrywood display cases - with his designs for the business premises at Wiener Graben Adolf Loos showed just what he felt the perfect ambience for a gentleman's outfitters should look like. Wooden fitted sections, carpets, door handles and luminaires - he left absolutely nothing to chance, and designed each and every item himself. And that included the radiant dodecahedron - a luminaire suspended from the ceiling that has gone down in history as the Knize Globe.

Loos constructed the Knize Globe from 12 congruent pentagons within a brass frame, considering it a Platonic shape whose surfaces melded functionally to form a single three-dimensional unit. Woka's redesign of the Kinze Globe shows that the polyhedron can, consistent with its structure, be expanded to form clusters and its surface extended or reshaped to create bent pentagonal structures. At the same time, the pendant luminaire is now a standing lamp. Thanks to the different possible applications, the dodecahedron extends the geometry of the pentagons, which add a pattern of colored pentagonal frames to the luminaire. Perhaps Loos would in his inimical way consider this new principle ornamentation, as it does not actually supplement the luminaire's functionality. At the same time, the redesign draws on one of the design's original ideas. The pentagon's stringent functionality can be supplemented by a cluster, which renders the dimension of the Platonic idea quite tangible. Thus the new Knize Globe fills a room like a geometric pattern, and one that gleams at that. And thus Adolf Loos' dodecahedron has duly entered the 21st century. 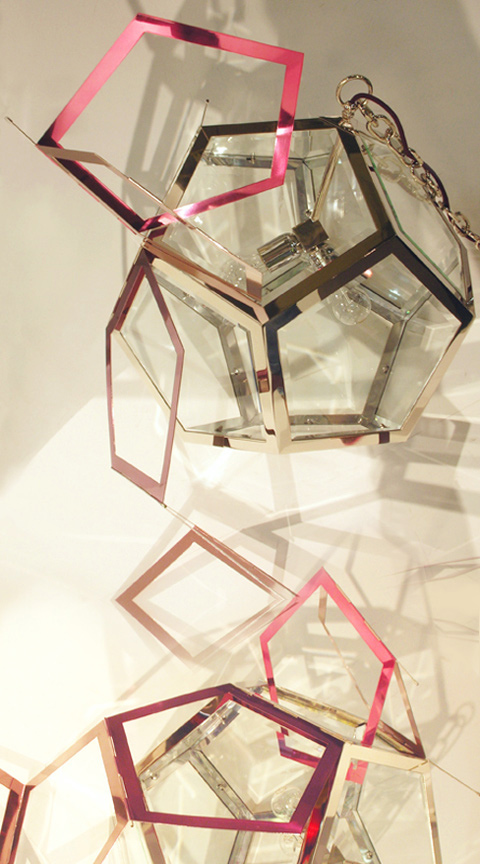