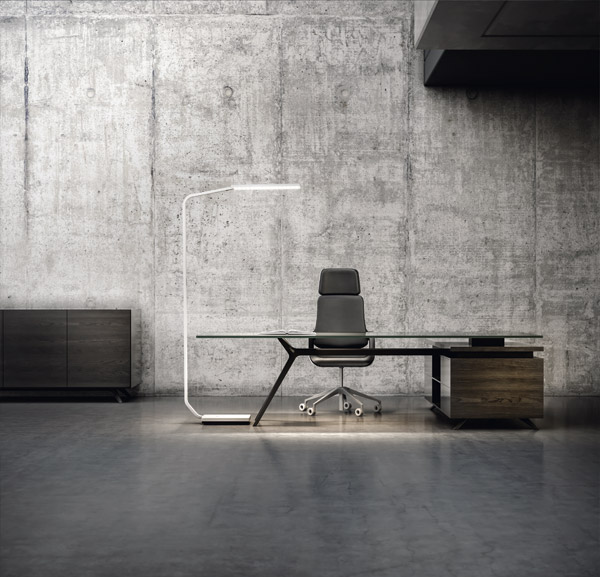 “Force One” – refined design, homogeneous light and high-tech for the office. Visualization © DesignRaum

“Force One” is the powerful name for the new luminaire that Berlin-based designer Rupert Kopp has created for and with Nimbus. With its slender body and intelligent details, the workstation floor-standing lamp cuts a fine figure in any office. The LED head with the soft-light diffusor provides even and dazzle-free light at work – despite brightness levels of over 8,000 Lumen. Sara Bertsche talked to Rupert Kopp about tricky technologies and development processes that require a lot of time.

Sara Bertsche: Could you briefly outline the “Force One” project for Nimbus? What was the briefing?

Rupert Kopp: As a rule I don’t tend to work with briefings. Instead, I chisel away on my own on a theme I find interesting or that has been buzzing around my brain. I then use renderings or volume models to try and persuade a manufacturer to go for it.
At the time, the theme I happened to be focused on was precisely a floor-standing luminaire. The concept for “Force One” can only be realized using LED technology. It seemed obvious in that context to contact Nimbus as they decided very early on to focus exclusively on LED technology. I was fortunate, the luminaire went into production, as had the “Roxxane” table lamp before it, and is now a highly successful product. “Force One” has many USPs in the market. Thanks to the luminaire’s bow-shaped body, the light can shine closer to where it is needed. At the same time, the baseplate disappears under the desk and can even avoid table frames on the floor. Another new idea is that the technical system is integrated into the base, making for a very balanced, elegant shape and a flat head that is mere 20mm thick.

And until then, it was a long process. How did the luminaire’s shape change in the course of the design developement?

Kopp: At first sight, in terms of its appearance, the concept was realized exactly the way it was envisaged in the first drawings and initial volume model. That said, all the details changed. In the first concept phase you aren’t really thinking about a switch or a sensor, above all not about the size of the various components. I had hoped that there would be a switch module on the market that we could easily integrate. But that wasn’t the case, which was precisely why it is fun working with Nimbus. If the right module isn’t readily available, they simply develop it, as with the capacitive switch unit. At the end of the day, almost every component was purpose-developed for “Force One”. Which creates completely new design potential – and two year’s lead-time was cutting it pretty fine.

Sounds like a real challenge... What was the kick for you as a designer to design a luminaire for workstations? Isn’t the design primarily influenced by the technology, leaving little actual creative scope?

Kopp: Well, the “Force One” concept shows you how much scope I actually had – the concept is quite unlike those for customary luminaires of this kind. Technology does not limit the scope for design, but offers opportunities to realize things differently. That interests me. LEDs have transformed the lighting market per se. No other segment is currently seeing as many innovations as are LEDs and there are constantly surprises that result from a new mindset. I get a kick out of finding those unsuspected ideas.

On average, the days in the office are very long. In your opinion, what is the optimal lighting for workstations to feel comfortable?

Kopp: Optimal lighting conditions are those that the individual in questions wants. Everyone has a different feel for light. As regards luminaires for PC workstations, certain lighting quality is predefined by the respective HSE norms. A floor-standing lamp in offices provides a degree of luxury as users can set the light the way they personally want it.

The level of the light provided by “Force One” changes automatically depending on the time of day and the season. At the same time, personal preferences can be set and indirect light also included. How practical is such a model in the everyday world of work? With all the different settings, doesn’t it expect too much of users?

Kopp: I don’t think so. The split switch on “Force One” guides you immediately and you can use it intuitively without requiring instructions. Of course you need to know that there is a daylight sensor and a motion sensor, and how to activate them. It’s no less complex or easy than grasping features on a mobile phone.

And finally a personal question to you: What light do your personally prefer at your desk when designing and toying around with new ideas?

Kopp: I like things to be bright. Of course, there’s a difference if I’m working on-screen or messing around with things. My “Force One” stands next to my high desk. It goes on automatically when I start working there and the light isn’t bright enough. Which is gerat.
Otherwise there are enough prototypes hanging or standing around being tested that provide light.

“Force One” – refined design, homogeneous light and high-tech for the office. Visualization © DesignRaum 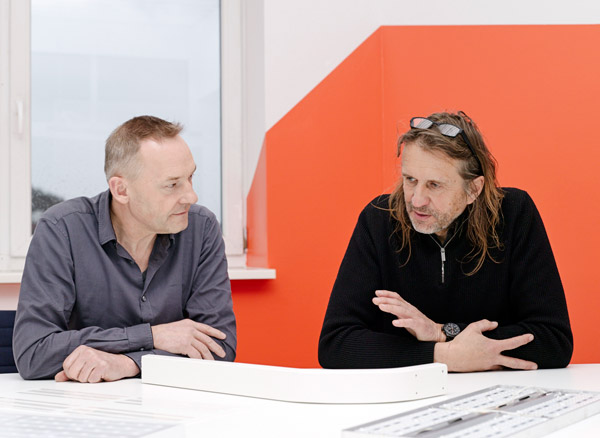 What takes time tends to come out tops: Rupert Kopp (on the l.) first had to convince Dietrich F. Brennenstuhl, Nimbus MD, that the idea was right. Photo © Frank Ockert 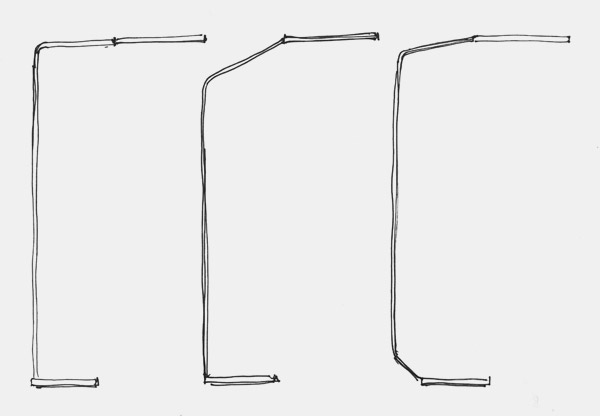 The designer developed a curved aluminum base and shaft that culminates in a light head almost one meter above the desk top.
Photo © Rupert Kopp 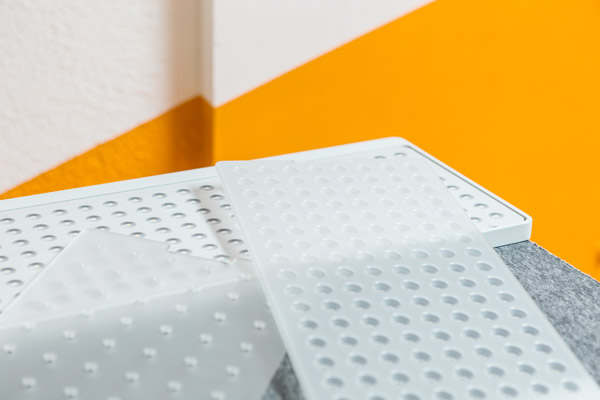 Soft-light diffusor and translucent acrylic glass provide homogeneous light and ensure it is spread evenly across a large section of the desk. Photo © Gordon Kölmel 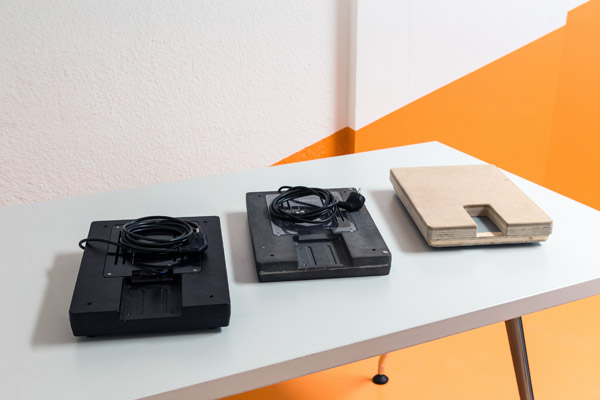 Polymath: The base houses all the technical parts, such as the microcontroller, heat management system and cordless connections. Photo © Gordon Kölmel 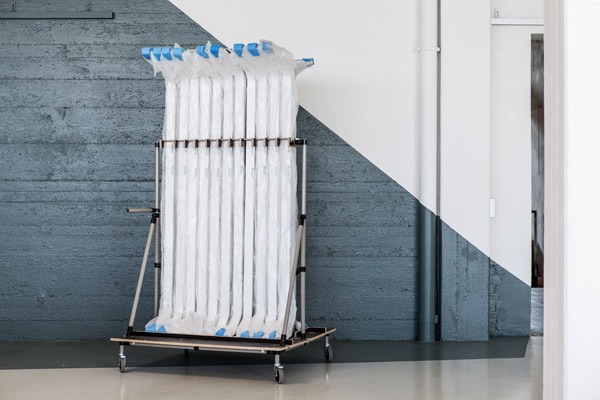 All in a row: the lamp frames await the next processing stage. Photo © Gordon Kölmel 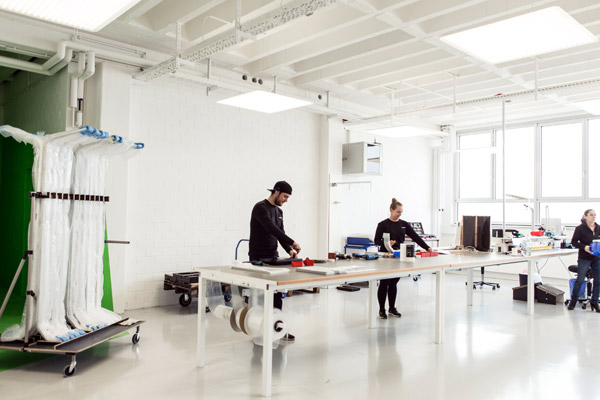 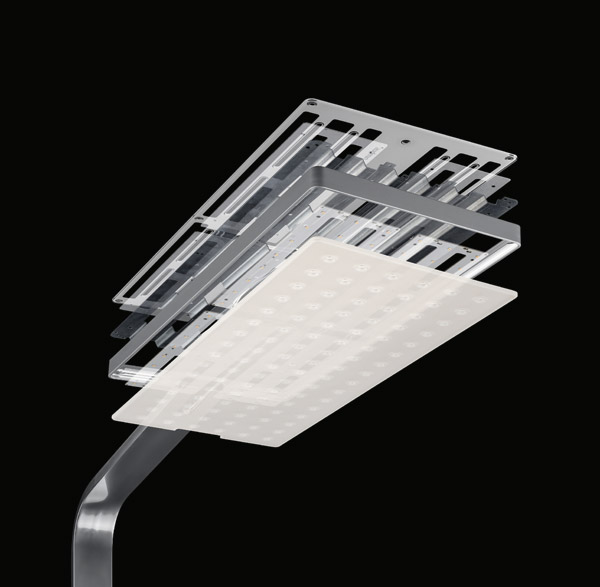 Layered: Behind the wafer-thin cover to the acrylic glass lamp head are the LED circuits for direct and indirect light.
Photo © Frank Ockert 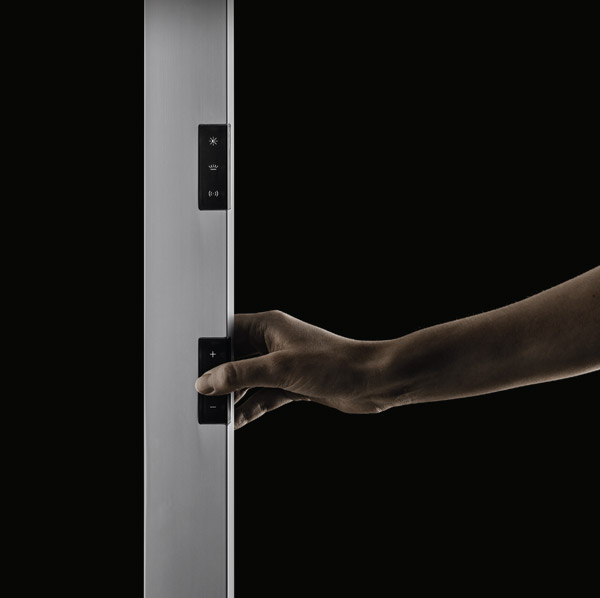 Dim and feel good, or brighten and feel good: The capacitive controls for the light have been integrated flush into the frame profile. Photo © Frank Ockert 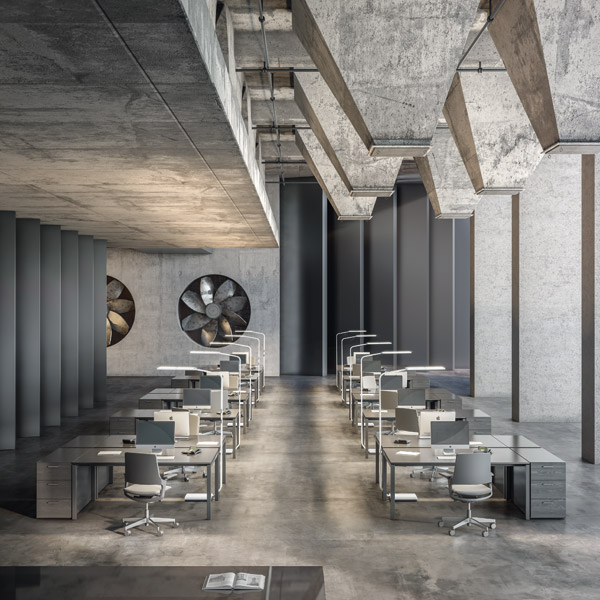 Fan out: Thanks to swarm technology several luminaires can be networked – with a Web interface you can thus create veritable lighting scenarios. Visualization © DesignRaum
Advertisement