The Monaco Yacht Show is widely considered a summit of the rich and glamorous of this world. Each year in September it attracts boat enthusiasts, stars and starlets, oligarchs and sheikhs, tourists and paparazzi alike. The hundred-plus floating palaces are luxury yachts of the ultimate class and are anchored sweetly in a row in Port Hercules, where they will then be handed over to their owners. No one here mentions money, but so much can be revealed: Among the mega-yachts are some that cost a million euros – per meter of ship, that is. With their multiple decks, pools, shaded terraces, salons and custom-designed interiors, these dream ships often boast more space than the one or other villa.

Like “O”, a yacht built by Italian wharf Sanlorenzo at the beginning of this year for a private owner, and resplendent with three decks and tasteful furnishing courtesy of Paola Lenti: a top-of-class floating recreational island. The snow-white yacht measures a massive 33.6 meters in length, and is a member of the “SD 112” class, as can be seen above all from its elegant-and-fast silhouette, inspired by the famous transatlantic liners of the 1930s. Several sun decks, a saloon, a spacious cabin complete with a studio and bathroom for the owner, as well as four other guest cabins ensure there’s plenty of space at sea. The Mexican architects at Studio Sordo Madaleno Arquitectos realized the owner’s special wishes, as he had a very clear notion of what his yacht was to look like: They created open, flowing on-board zones by devising fold-out balconies along the main deck and sliding glass doors between the inside and outside worlds. Inside, white floors and walls create an uncluttered, friendly atmosphere, while the decks made of high-end Tanganyika wood, natural stone paneling and refined spiral staircases exude a sense of highly chic luxury. Pleasantly restrained and yet truly exquisite: the furniture by Paola Lenti from his “Aqua Collection" in tender blues and earth hues, the brainchild of Milan designer Francesco Rota, who shows a real talent for soft, flowing silhouettes and subtle colors.

Thus, individual zones have been decked out with comfy settees from the “Sabi” line, soft armchairs from the “Smile” seats family, and small poufs from the “Shell” line – to create veritable isles of relaxation. The small, compact armchair from the “Ami” chairs series is a haptic joy at the dining table, too – the upholstery is hand-made of a tubular outdoor fabric woven directly on the steel structure. Right up top, on the sundeck with the whirlpool, modular sofas from the “Cove” line can be grouped to create just what their names promises. All the seats were made of special high-tech yarns, so-called “Rope” and "Aquatech", rendering them impervious to rain, heat and even chlorine. 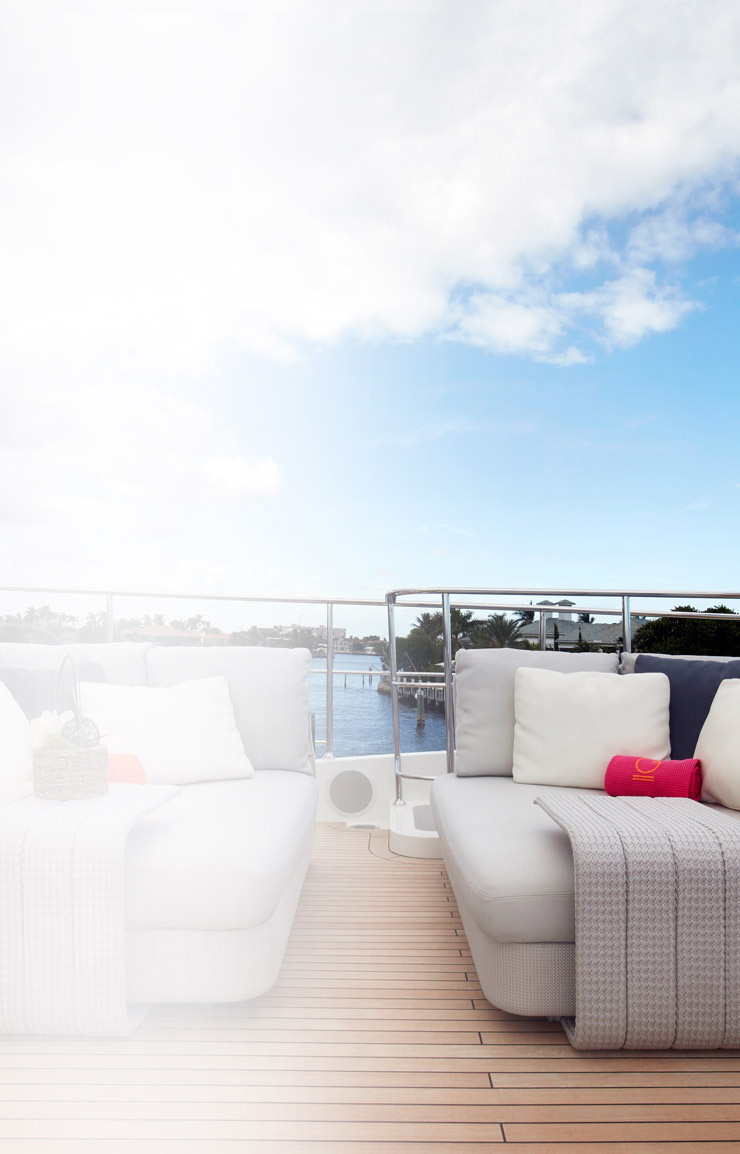 Paola Lenti has made a name for itself with its special high-tech yarns, called "Rope" and “Aquatech” – and has since been busy outfitting ships’ entire outdoor areas with the beautiful, long-lasting furniture from his “Aqua Collection” – such as here on the deck of the “Sanlorenzo SD112 O”. 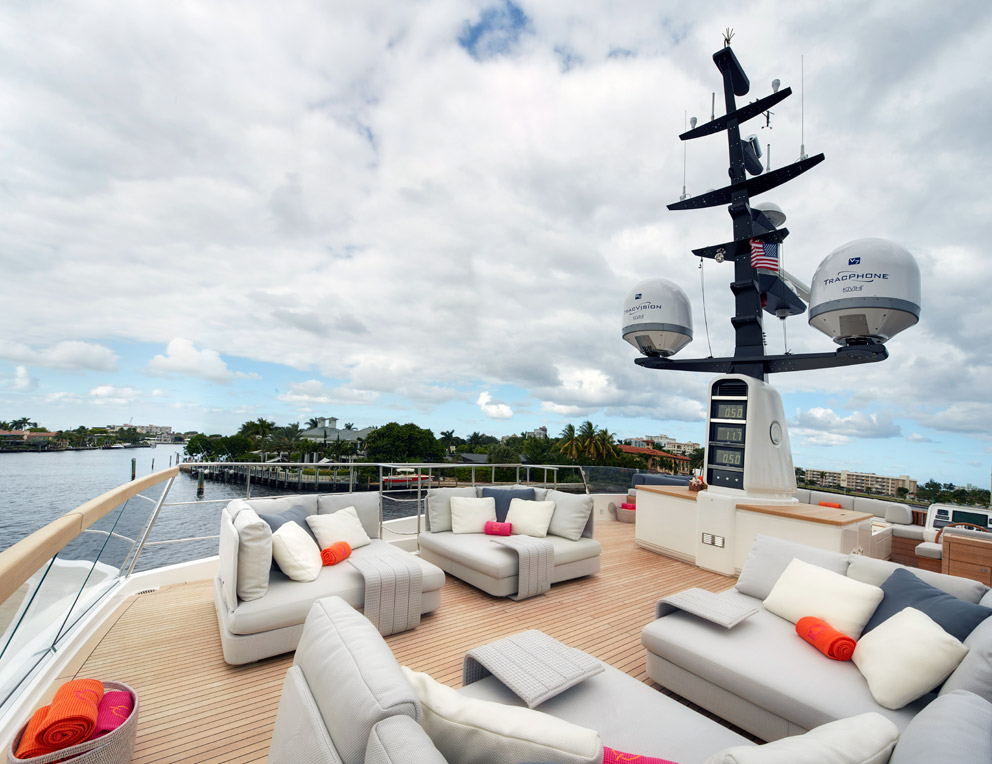 Join Paola Lenti on the sun deck: Up here, between the mast and the whirlpool, you can lounge on its “Cove” settees, with their broad seats and low backrests, and really go with the flow. The backs and armrests are flexible and can be slotted into the platforms at any chosen point. Photo © Giuseppe Raso Lightline 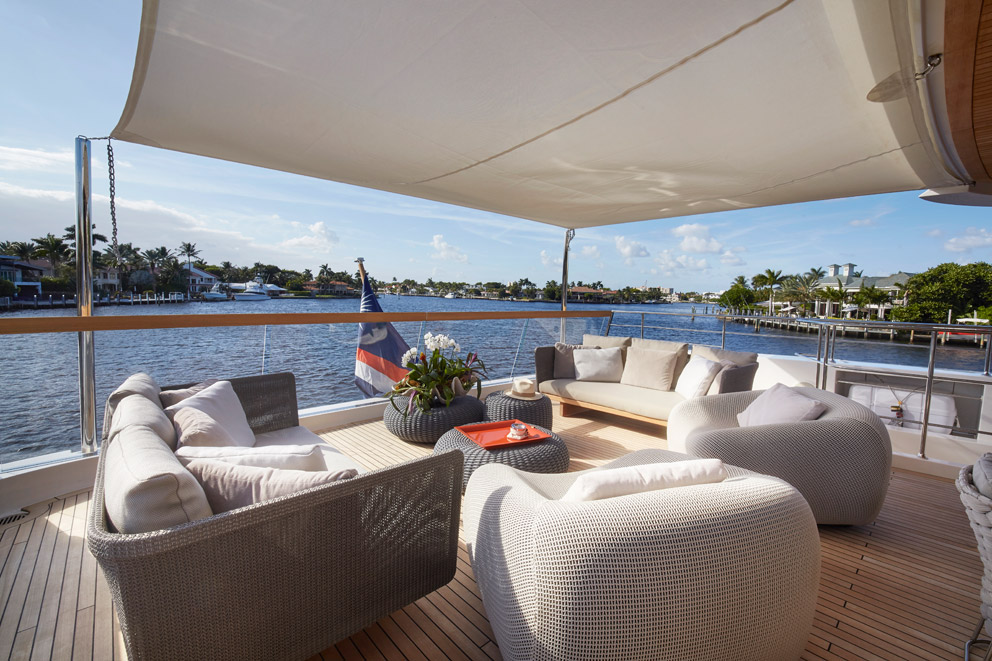 Like woven candy floss: “Smile" armchairs with their amorphous silhouettes and removable covers made of “Aero”, a brand fabric by Paola Lenti; just as is the Thuia fabric upholstery of the “Sabi” settees (on the l.). Photo © Giuseppe Raso Lightline 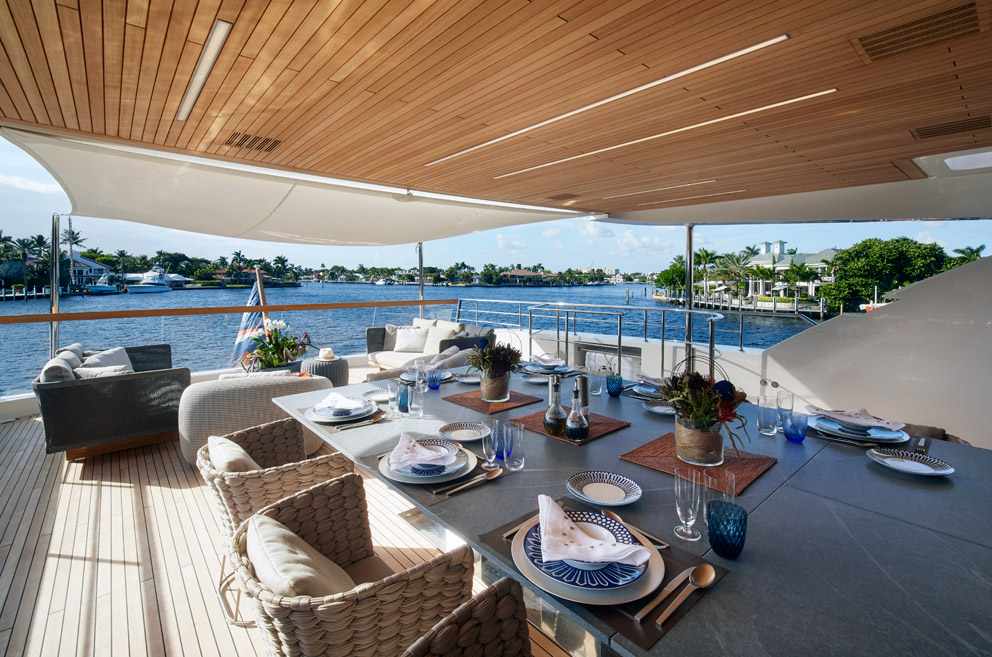 Eating beneath a sun-sail: Paola Lenti’s furniture is especially light and can be used quite flexibly – as with the “Ami" chair, a small, compact hand-woven armchair for outdoors. Photo © Giuseppe Raso Lightline 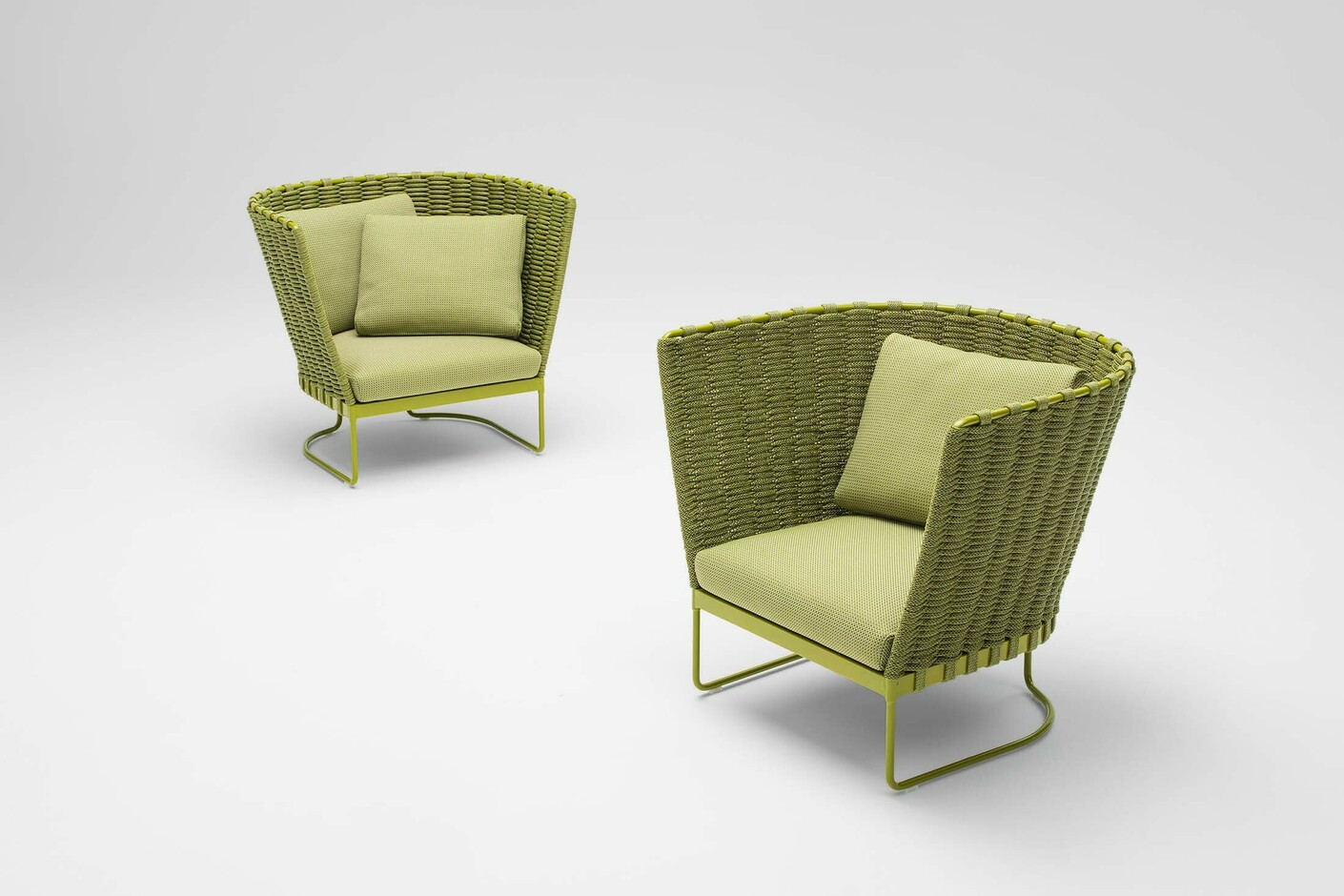 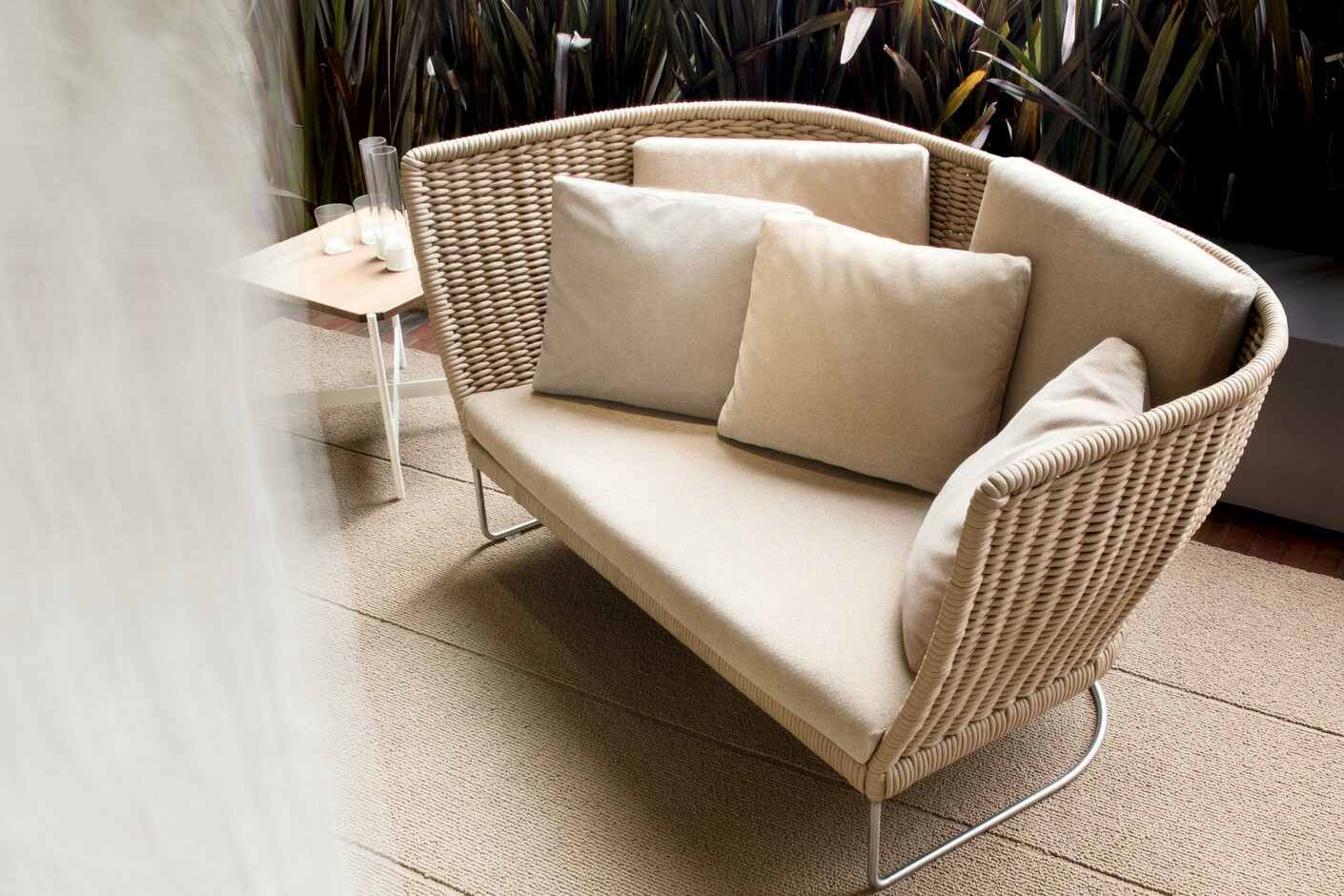 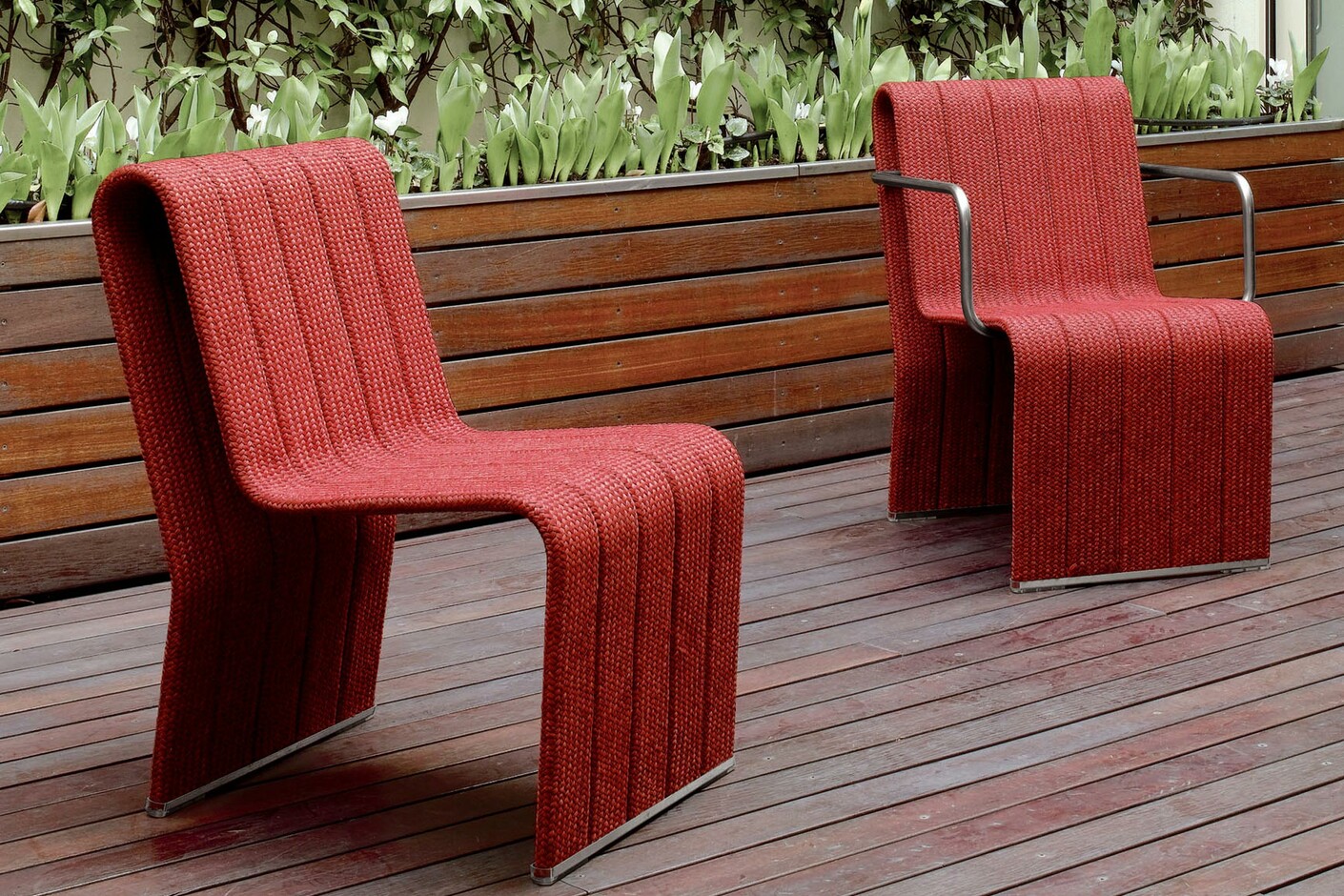