The Salone Internazionale del Mobile runs from April 12 to 17, bringing all of Milan under the sign of design. In a nutshell, there are a few important items of news: This year, many things will start a day earlier, and some showrooms and exhibitions will actually open on Monday, the first trade-fair day is Tuesday. The erstwhile organizers have since filed for bankruptcy, and Zona Tortona will this year, among other things, boast a new logo. In his second edition, Ventura Lambrate will again be presenting a strong range of young design. Milan’s downtown will become greener thanks to the “Zona Isola”. And Established+Sons has for many years not been at La Pelota.

To make it easier for you to choose from among the countless events announced, Stylepark has selected what we consider some of the most promising events. We wish you many inspiring hours, refreshing contacts, and a few moments to enjoy a good Italian espresso in-between.

Have a nice time!
Your Stylepark Team

Architecture as a piece of nature

In the exhibition on “Architecture as a piece of nature” artist Maris Mezulis offers a filmic portrait of the new generation of Japanese architects. Junya Ishigami, Sou Fujimoto and Akihisa Hirata will attend the opening.

“kkaarrlls” is the title of a collection of an edition of now some 35 items. The exhibits all have one thing in common: they are based on parts created by young European designers while studying at the Karlsruhe Academy of Design.

For the fourth time now, Danish Crafts is presenting the “Mindcraft” exhibition in Milan. This time, the exhibition is being curated by designer Cecilie Manz, and cameos works by Danish craftsmen and designers.

For the ninth edition of the “Green Island”, botanists and landscape architects have been invited to create the first wild garden in Milan. One of several installations, for example, is “Green Provocateur”, an urban design intervention dreamed up by New York photographer Paul Clemence in the Via Pepe, opposite the Equilibrio Urbano Conceptstore.

Isola neighbourhood, via Pepe, Milan
Open daily from 10 a.m. to 8 p.m.
Opening party with cocktails on April 12 at 12 noon
www.amaze.it

Within the shortest period of time imaginable, the “Ventura Lambrate” design mile has emerged as one of the attractive crowd magnets during the Milan design week. In Lambrate, a charming district of town with historical industrial halls countless young designers will again be exhibiting their works – a total of 45 presentations have been announced.

The “Poetry happens” exhibition presents personal projects by designers, architects and artists such as Werner Aisslinger, Studio Makkink & Bey, Mark Braun, Fabien Dumas, ettlabenn, Formfjord and others. For example, Werner Aisslinger will be presenting his “Hemp” shell chair, made of eco-friendly material derived from hemp and flax.

On the occasion of the Salone del Mobile’s 50th birthday, Alberto Alessi is curating the exhibition “Dream Factories. Italian Design Factories: the People, Ideas, Enterprises and Paradoxes”. In this project, the focus will be on “Italian design factories”, which Alessi construes as industrial research labs in the field of applied art. The exhibition and catalog have been designed by Catalonian artist and self-appointed ex-designer Martí Guixé.
From April 5, 2011 to February 26, 2012

A visit to the Triennial is an absolute must for any design aficionado – and not only to enjoy browsing round the café, designed by Michele de Lucci and boasting over 100 different classic chairs. This year, the Triennial will again be hosting numerous exhibitions. One of them is a solo show entitled “Mendini/Bisazza. Opere dalla Fondazione Bisazza” and is in honor of Alessandro Mendini, who has been collaborating with Bisazza for 30 years now. Alongside Mendini’s extensive body of works a newly-designed sculpture will also be on display.
www.bisazza.com

Taiwanese design brand Yii translates its local handicrafts and traditions into the language of contemporary design in the exhibition "Street life". This year, Yii is presenting a new way of expressing Taiwan’s culture, namely by means of everyday life in the country.
www.yiidesign.com

Museo Poldi Pezzoli is home to an exhibition entitled “Di vaso in fiore. Inventario tra natura e design”, which can be translated as “Blooming vases. The state of things between nature and design”. The exhibition by Beppe Finessi features some 50 vases, including new pieces by Alexis Georgacopoulos, Martí Guixé, Fabio Novembre and a few historical designs by the likes of Bruno Munari, Ettore Sottsass, Angelo Mangiarotti, Alessandro Mendini and Enzo Mari. Each vase will be decorated by a fresh bouquet, renewed each day by a florist.

Designer Stefan Diez will be staging new models of his “Chassis” chair design for Wilkhahn in the Spotti furniture store, a renowned design institution. He joined forces with fashion designer Farah Ebrahimi to create an extraordinary fabric and color concept for the purpose.

Under the agenda of “Shifting Contexts”, protagonists of the architecture and design scene interpret and orchestrate Bulthaup anew. The event will kick off with a staging of the “bulthaup b3” kitchen by Art Director Mike Meiré, to be seen in the Showroom on the occasion of the furniture fair.

Flos and BMW are repeating the successful cooperation they initiated for last year’s Milan fair. The second edition takes the form of “Sestosenso”, a shining staged show by Paul Cocksedge.

Domus Live – A space for debates, lectures and workshops

For the very first time, Vitra Design Museum has joined up with the magazine Domus on the occasion of the Milan furniture fair to create a unique presence at the “Fuorisalone”. The “Domus Live – A space for debates, lectures and workshops” project offers leading designers, thinkers and visitors a platform for debate, where they can discuss various issues under the heading of “Urban Futures”. The debates will feature designers such as Jerszy Seymour, Jan Edler, Paola Antonelli, Joanna van der Zanden, Ed Annik and Marti Guixé.

Hermès has replaced Established+Sons as the exhibitor in the La Pelota hall and is displaying its first furniture collection there, created in collaboration with outstanding contemporary designers. Enzo Mari dreamed up furniture for the office and dining room, Antonio Citterio devised a line for living rooms, Denis Montel teamed up with Benqué to develop a chair. Shigeru Ban and Jean de Gastines will be staging the La Pelota space specialy for the extensive Hermès Maison collection.

Foscarini is presenting an installation entitled “Metamorphosis” in Superstudio Più: it boasts luminaires, assembled, swiveled, and re-positioned, to form multiple iterations and new impressive sculptures. Alcantara is drawing on the services of Giulio Cappellini and Paola Navone for its “The Dream House” event at Superstudio Più. On that occasion, the new “Alcantra Interiors” collection will be presented.

Under the overall name of “designjunction” for the first time several British designers and manufacturer are taking to the floor together in Milan. In the former Riva-Calzoni building in the Zona Tortona, among others, the Modus, Benchmark, Innermost, Beau McClellan, Anglepoise, Melin Tregwynt brands will be on show with the only non-Brit, luminaire makers Roll & Hill.

For Moooi’s 10th birthday, the showroom façade has been transformed into a camera obscura and with this “The unexpected welcome” Moooi casts a representative glance back over the last decade.

Artek is highlighting a new luminaire collection at the Euroluce, presenting classics by Alvar Aalto in new colors, and showcasing furniture from the Ilmari Tapiovaara collection at the Gió Marconi gallery. Tapiovaara is regarded as the great admirer of Alvar Aalto and created products that rely on the same ideological premises as those of his role model.

Interni is organizing a live concert by Lorenzo Palmeri and Davide Ferrario as well as lectures by Mario Botta and Richard Meier as part of its “Mutant Architecture & Design” presentation. Mutant Architecture & Design is an exhibition of various works by designers and architects such as Mario Botta, Michele De Lucchi, Nicolas Gwenael, Zaha Hadid Architects, Ingo Maurer and Richard Meier. 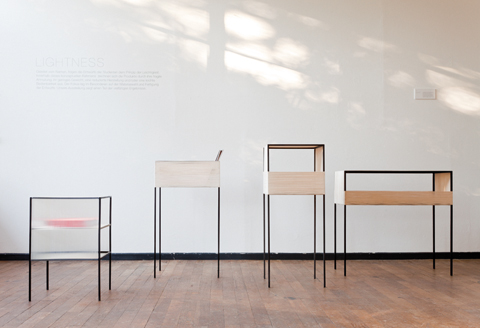 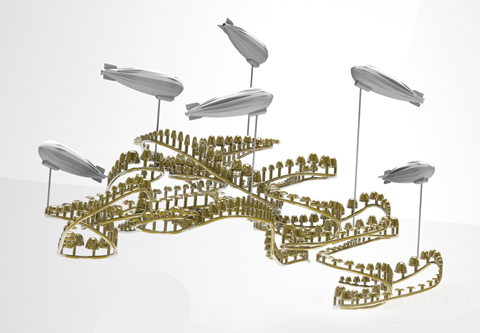 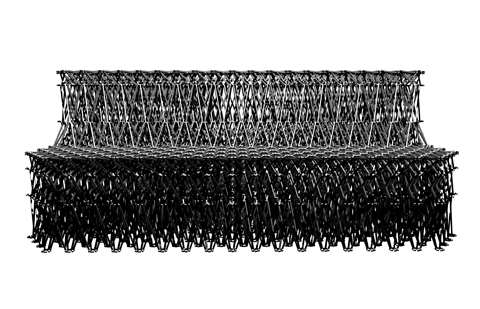 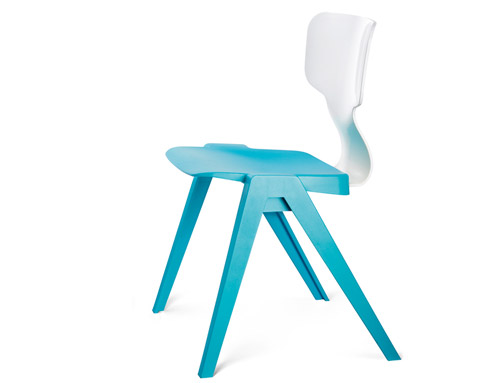 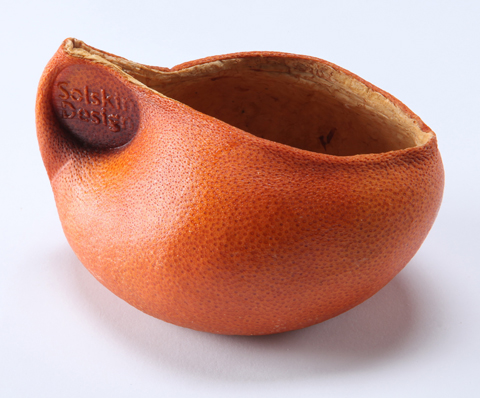 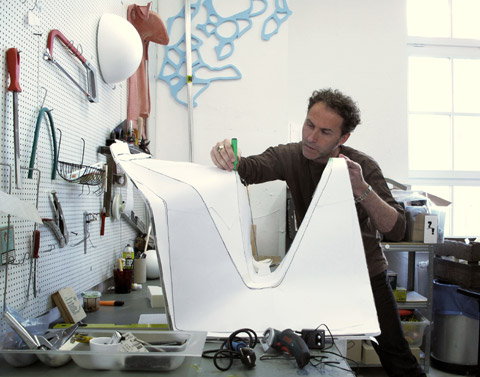 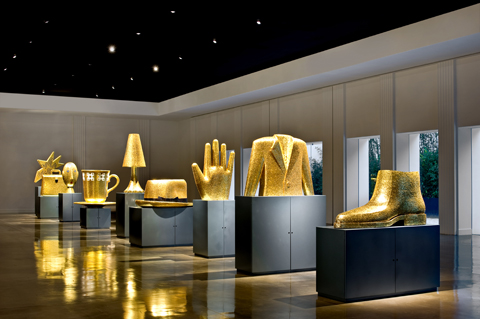 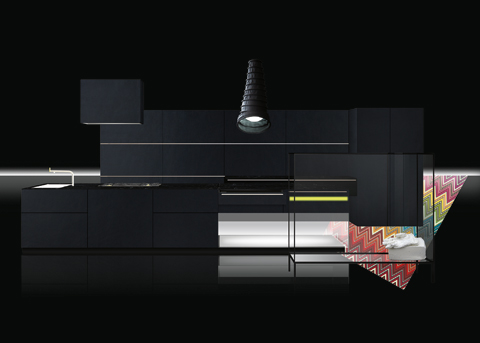 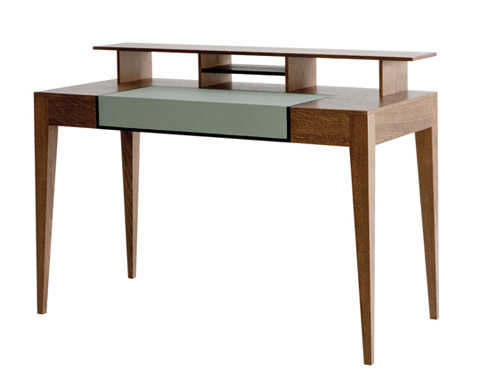 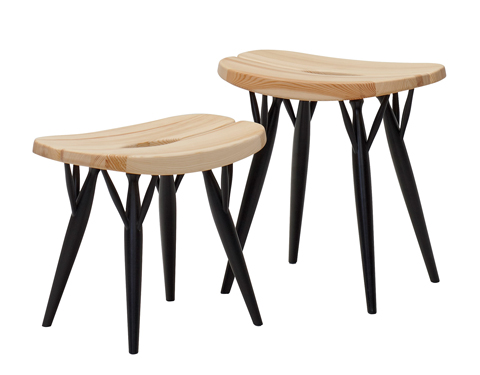 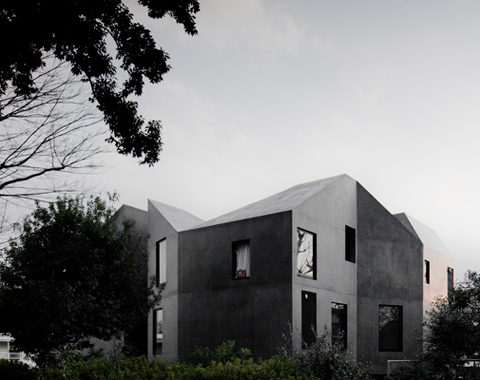 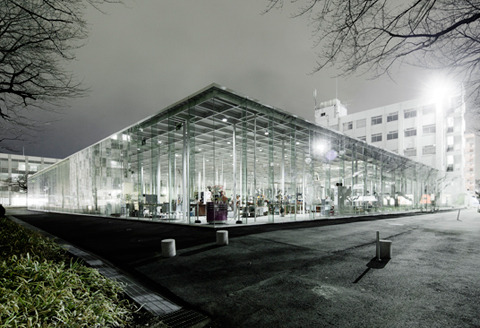 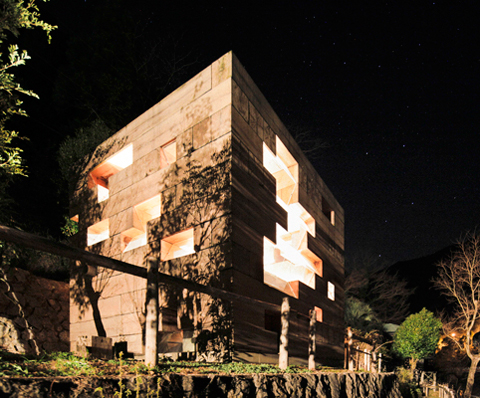 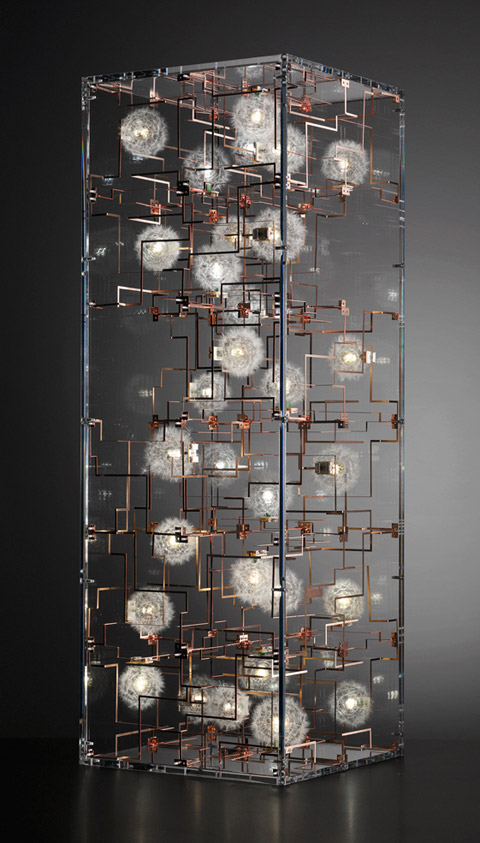 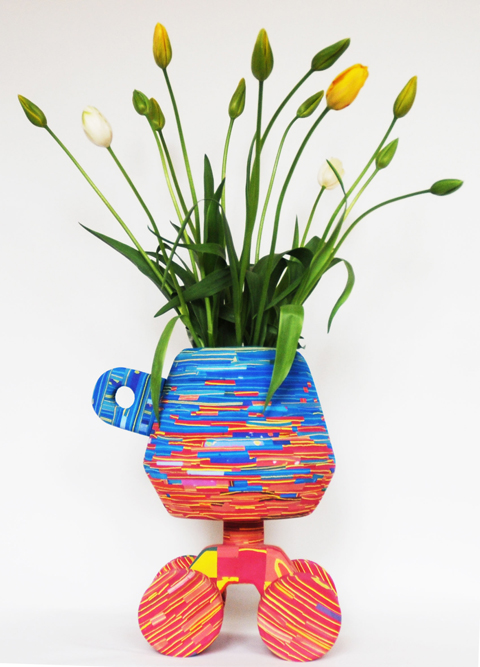 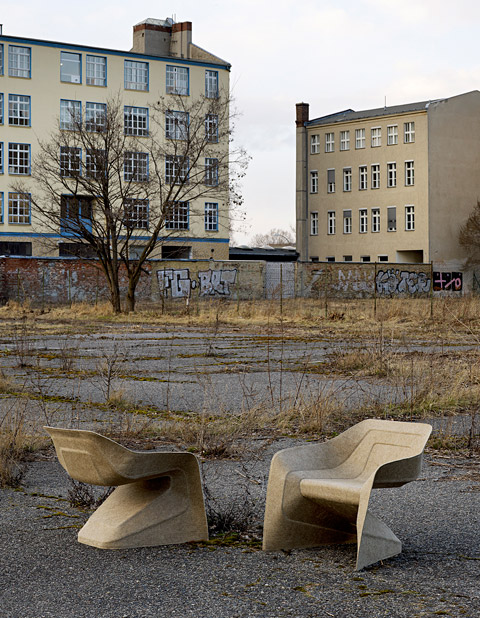 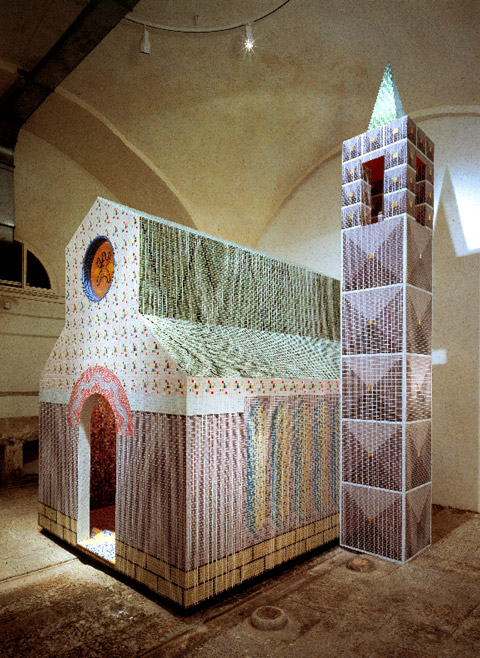 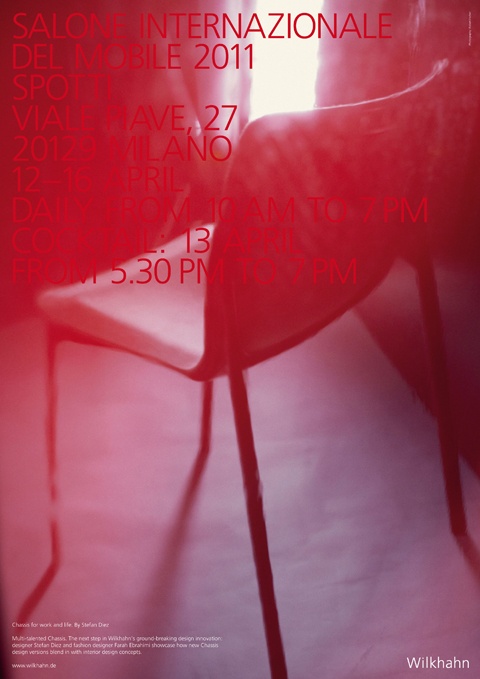 Chassis by Stefan Diez for Wilkhahn 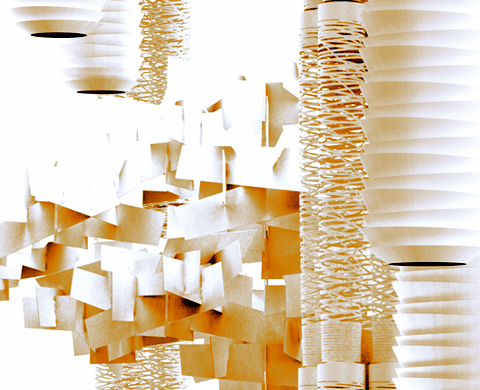 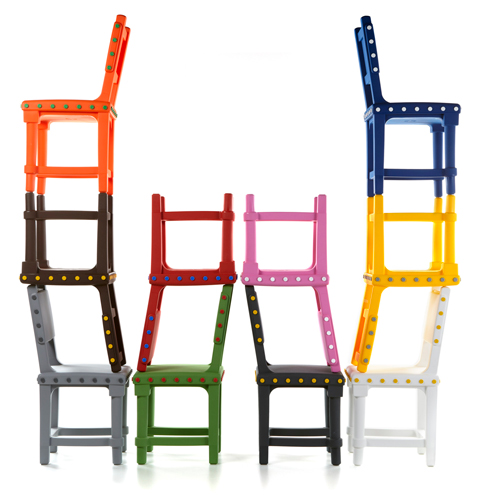 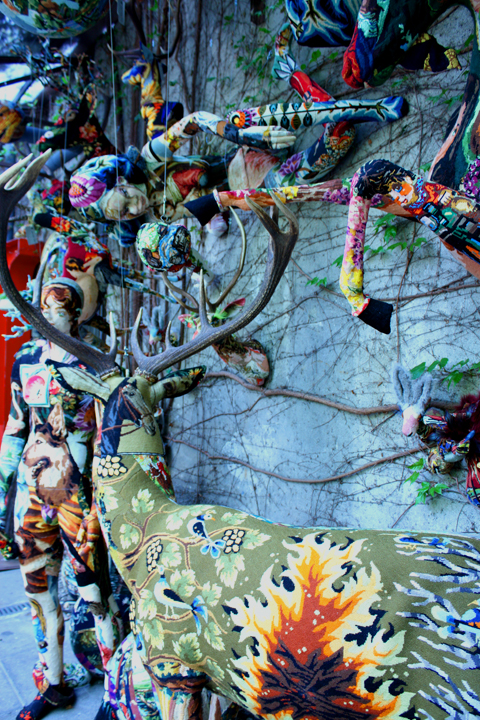