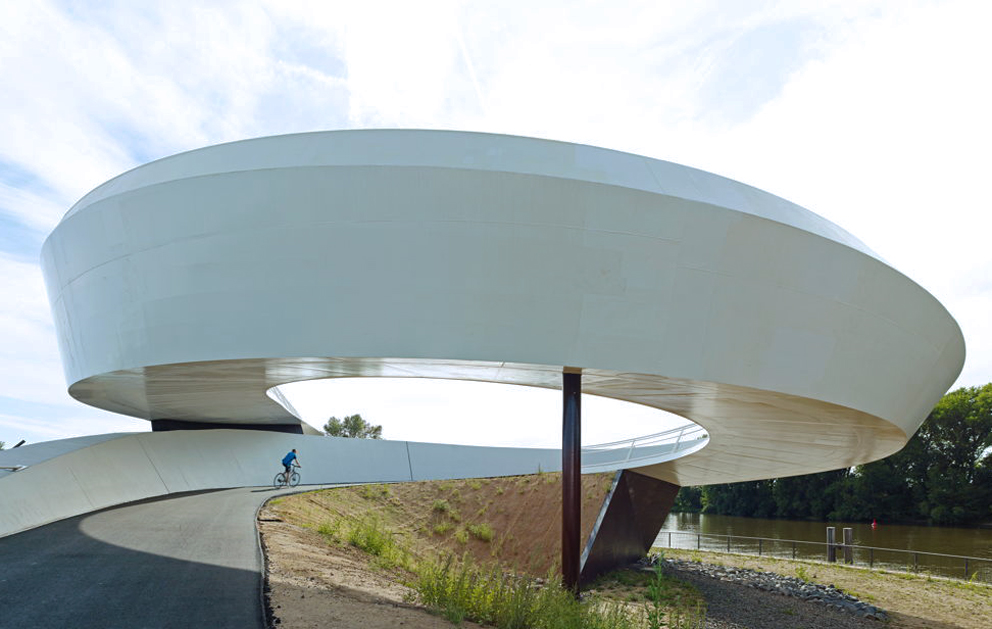 The new bridge, designed by Frankfurt architects Schneider+Schumacher, now spans over the oil harbor at Raunheim at the Main. Photo © Jörg Hempel

Rüsselsheim, Raunheim and Kelsterbach: The three towns located southwest of Frankfurt share the banks of the River Main as their common green belt, which is linked by a trans-regional walking and cycling route. Up until a few months ago, however, the idyllic country setting was decidedly marred by Raunheim’s oil port, a bend in the river lined by Frankfurt Airport’s oil tank farm, which forced those enjoying a leisurely ride along the riverside to take a detour through the far less charming surroundings of the nearby industrial estate.

Since May 2013 this diversion is history: The new oil harbor bridge, the brainchild of Frankfurt architects Schneider+Schumacher, now spans the port entrance with a total length of 170 meters, forming a seamless continuation of the riverside path. That the new bridge is functionally outstanding is undisputed and what takes the structure to unprecedented new heights is the bold aesthetic with which it asserts its presence in the face of many a building restriction that may say otherwise: Sweeping over the oil port like a “calligraphic gesture”, it coils east of it into a single helix that brings the deck down level with the embankment. White like the tanks on its periphery and with subtle reference to their footprints, the bridge aligns parallel with the Main – in close proximity to the tank farm and yet perfectly concealed.

Of nearby perils and magnificent views

This last point deserves closer inspection as the bridge was inserted into the space between the river and what is essentially a depot for highly flammable materials, meaning that health and safety issues are of paramount importance. Even though anyone using the bridge inevitably comes close to the tank farm and the filling stations, the architects had to ensure that no burning objects were able to reach the premises, be it as a result of criminal conduct or unfavorable wind conditions. According to the brief, the bridge had to be designed in such a way as to ensure oil tankers were far out of reach, and as a welcome byproduct the bridge was expected to protect users in case of potential accidents. All in all, the architects had to master multiple challenges here. They overcame the safety issue by designing the parapet of the bridge and the helix where it faces the tank farm to constitute a safety wall of just below three meters tall. By contrast, vis-à-vis the Main they gave the structure a more open flair, opting for a filigree railing made of stainless steel mesh to promote visual connections with the river. After all, it’s the amazing view that attracts most visitors to the site!

Things may change in the future, however, as the bridge establishes itself as a tourist attraction: As part of the “Zusammen gebaut – Leben mit Wasser” (Built together – living with water) competition the oil harbor bridge was the first ever bridge to receive the “Landesinitiative Baukultur” award from the State of Hessen last September. The jury went on record as saying that the competition criteria (innovation, design, functionality, sustainability and cooperation) had been more than met. One government representative even went as far as to draw a bold comparison. Referencing the “Bilbao effect” he expressed the bridge’s potential to become a veritable tourist magnet – just like the Guggenheim Museum in the Spanish provincial capital. Even though the analogy may seem a little far-fetched, it may well be that the bridge becomes a popular leisure-time destination for architectural aficionados from the Rhine-Main region.

The white structure that greets potential architectural tourists from afar reveals itself on closer inspection to be a bi-partite entity: Leaving the coiling concrete helix aside, the oil harbor bridge is a steel construction that is based on the cross section of an L-shaped box beam. Its sidewall not only provides the required protection from the oil terminal but also serves a load-bearing function, reducing the design height of the horizontal part of the box beam as a result. The entire structure rests on pile foundations up to 20 meters deep that left the port’s existing back-anchored sheet pile walls untouched – these are not permitted to bear any additional loads anyway. Architects Schneider + Schumacher teamed up with the engineers from the Düsseldorf firm Schüssler-Plan for this challenging assignment.

The construction costs for the oil harbor bridge came to some EUR 5 million. The project was funded by the joint venture between the towns of Raunheim, Rüsselsheim und Kelsterbach in addition to the Regionalpark RheinMain Gesellschaft, the central government, the State of Hessen and the Fraport Real Estate Mönchhof-Gesellschaft.

A cut-out-and-keep church: The highway church by Schneider+Schumacher speaks the language of a billboard, yet still surprises with its architectural diversity.
(05 July 2013)

Bridging a gap or a bridge to urban disaster? In Hamburg a new city highway and a bridge is expected primarily to ease commercial traffic - but the overall project remains dubious.
(13 June 2013) 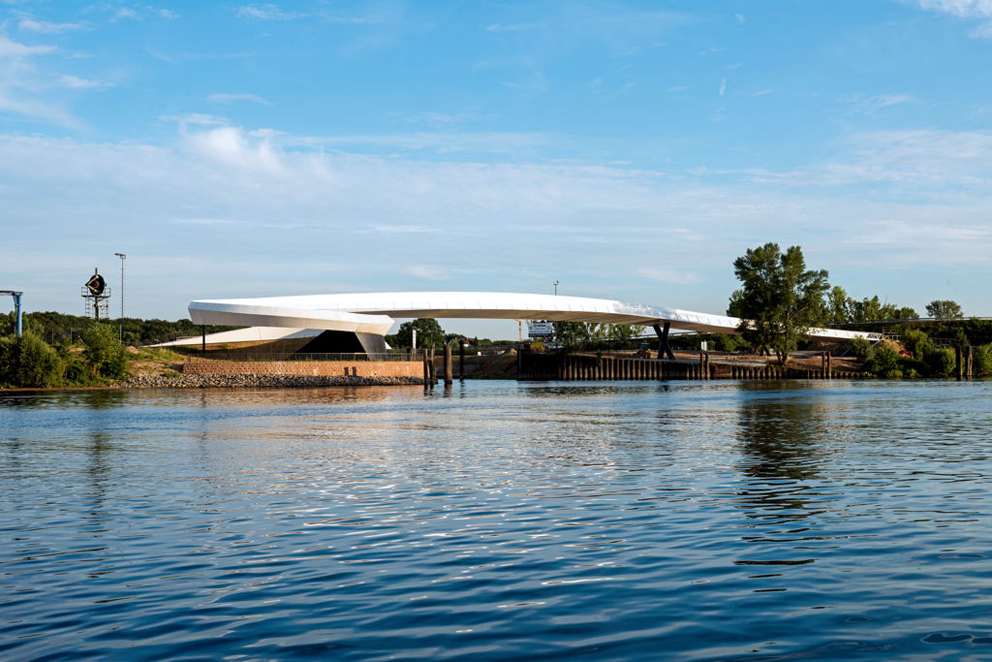 Sweeping over the oil port entrance like a “calligraphic gesture” with a total length of 170 meters. Photo © Jörg Hempel 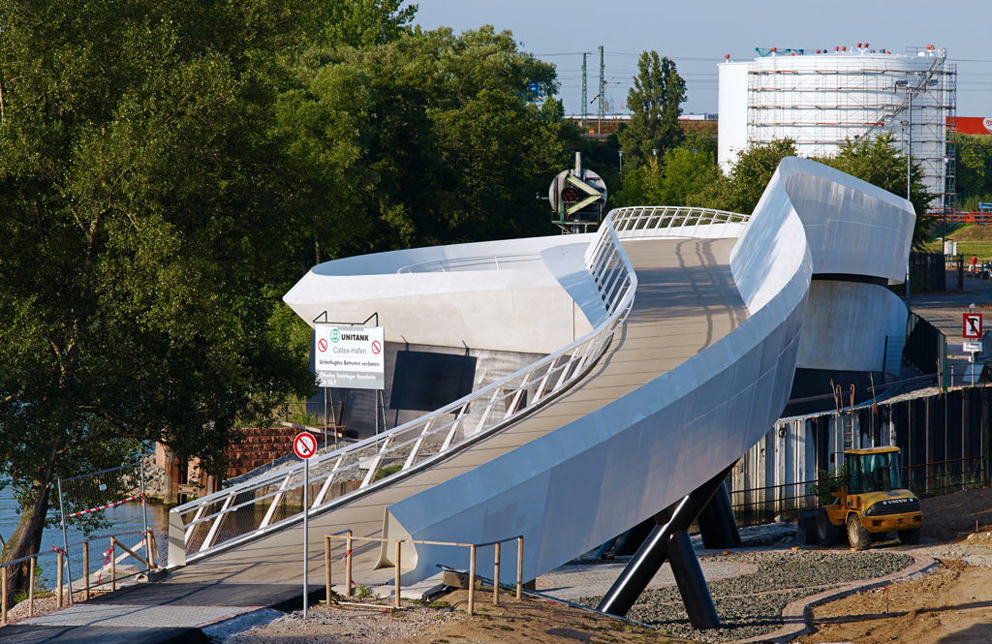 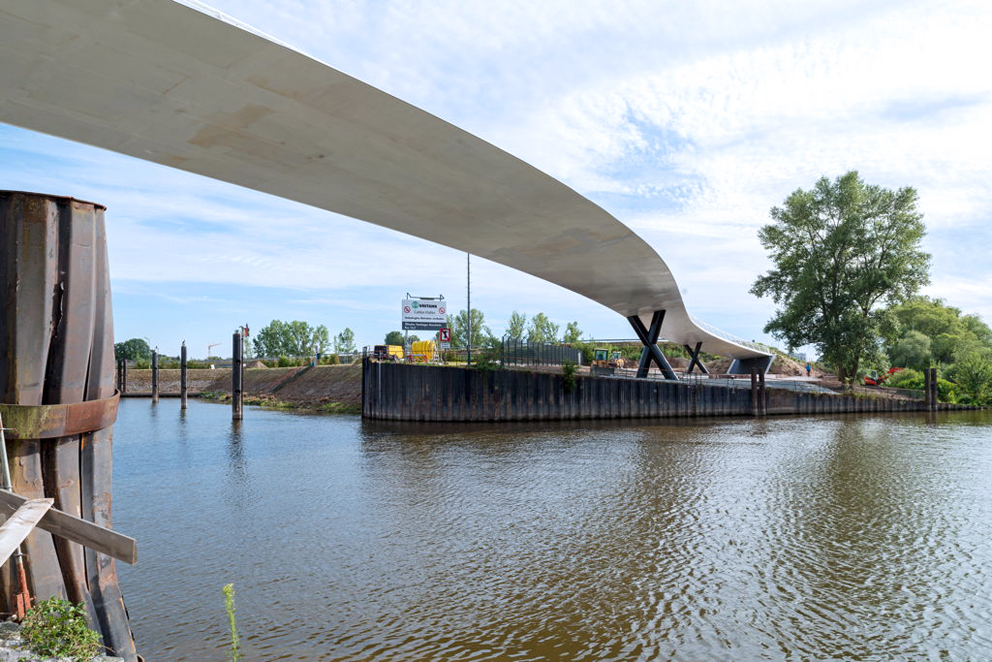 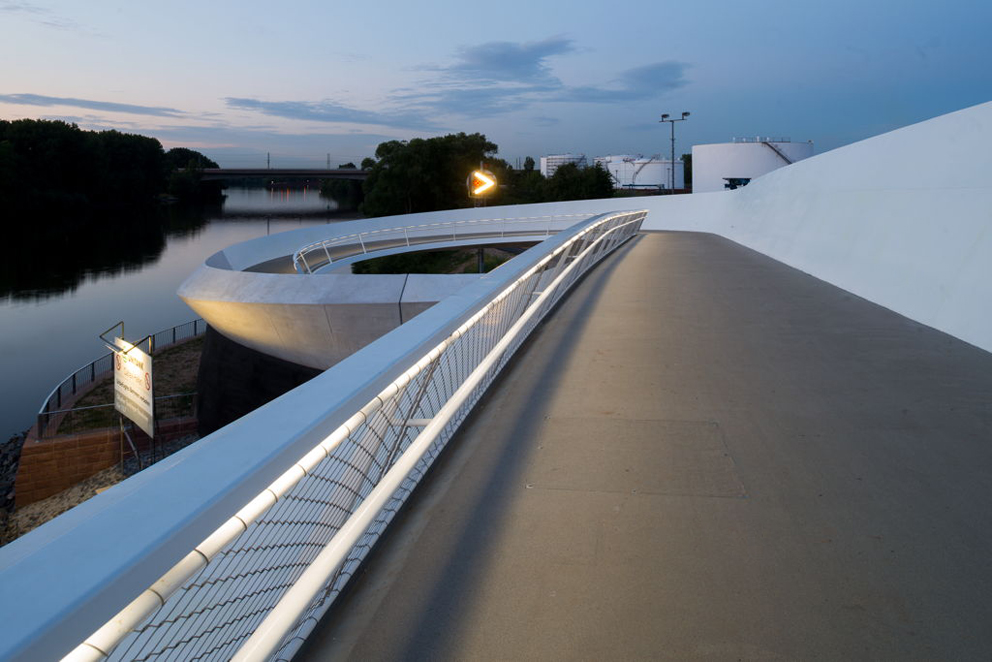 As a welcome byproduct the bridge was expected to protect users in case of potential accidents. Photo © Jörg Hempel 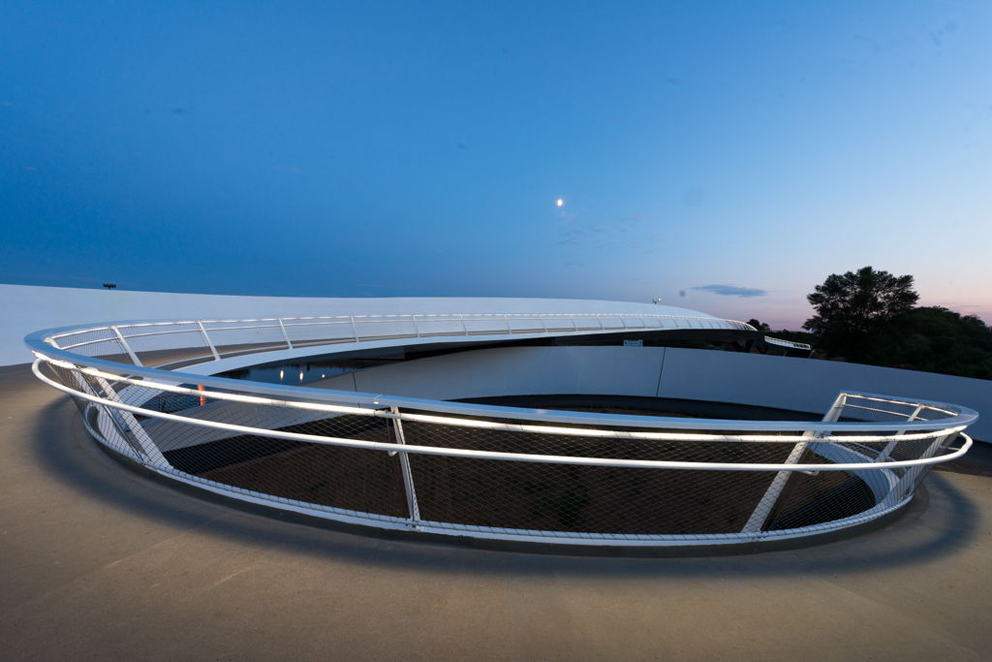 Dynamic-total: The oil habror bridge reminds at a tempodrom or a water slide. Photo © Jörg Hempel 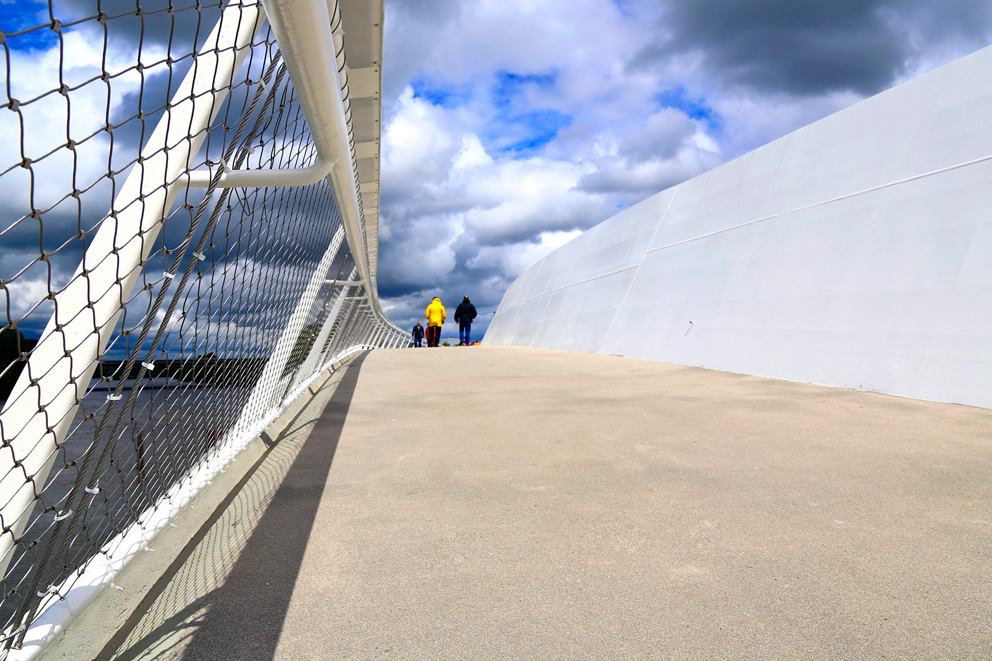 Opting for a filigree railing made of stainless steel mesh to promote visual connections with the river. Photo © Helen Schiffer 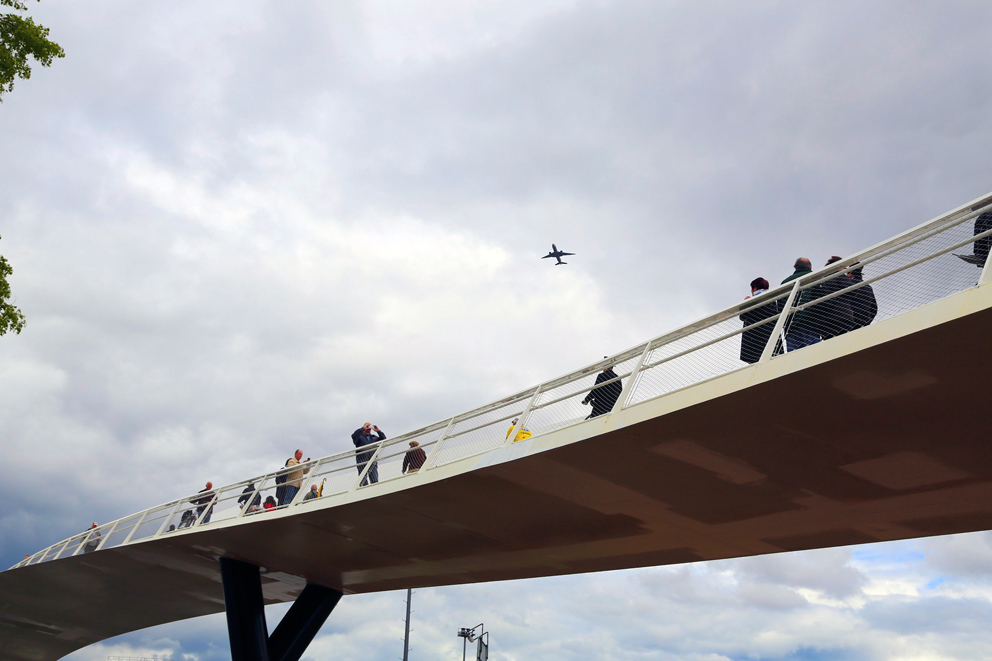 The first ever bridge to receive the “Landesinitiative Baukultur” award from the State of Hessen. Photo © Helen Schiffer 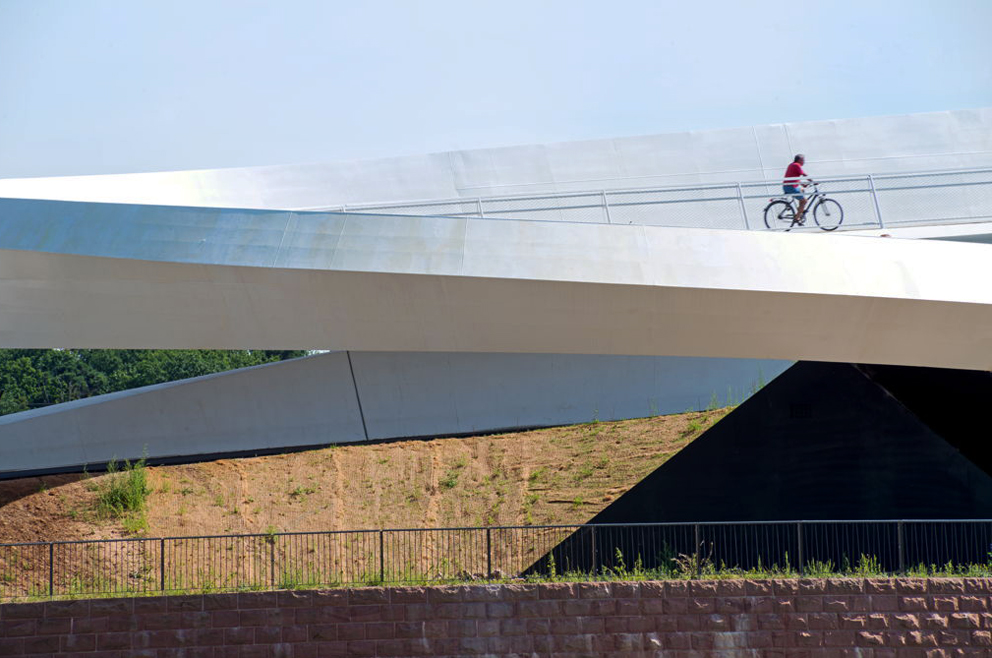