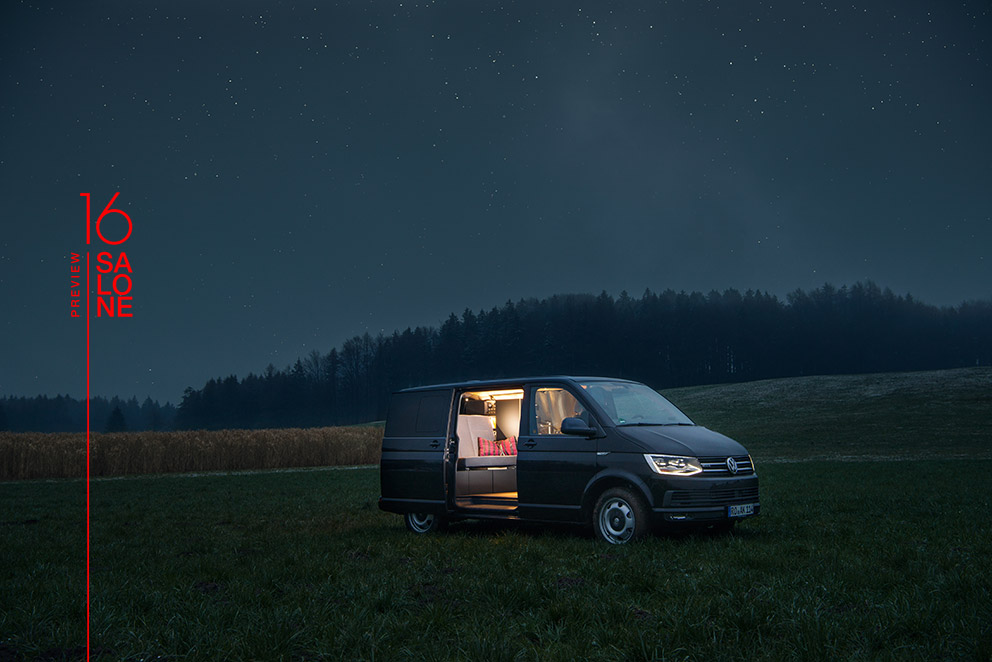 As the world outside is colorful and varied enough anyhow, inside the bus the focus can be more on calm and reduced design. So Nils Holger Moormann and his team omitted everything that could possibly be omitted. From the outside the vehicle appears completely inconspicuous, while inside you find the typical Moormann features. And because Mr. Moormann prefers the flexibility of a camper to any hotel, and because his domicile on wheels has to be something special, and nothing of the sort existed previously as a standard model, it now does thanks to a cooperation between Moormann with CustomBus, maker of customized campers, mobile homes, traveling homes and mobile offices - all based on the Volkswagen T6.

And this deck class boasts real class, as is evidenced by these examples of its luxuriously modest equipment and furnishings:

- cutlery for two, as a glance in the draw reveals;
- ceiling light and other comforts can be switched on and off via wonderful toggle switches;
- the nanotech laminate with matt surface that is velvety to the touch, does not show fingerprints, is scratch resistant and easy to clean;
- handles of zinc alloy that close quietly thanks to compression latches;
- two lit shelves not only for books on design (novels, Moormann, novels!!);
- the footstool behind the passenger seat is magnetically locked, and comes with a magnetically locked brush;
- the kitchen work surfaces, together with sink and gas hob, are (once again) fingerprint resistant;
- unlike the kitchen utensils, the sofa bed for two people - system CustomBus with a cold foam core, are available as standard;
- the seat covers come from a Bavarian weaving mill and have specific quality features: 50,000 or 60,000 abrasion cycles (DIN EN ISO 12947-2);
- moreover, the deck class has oiled oak decking with anti-slip rubber sealing, is easy-care, color-fast and won’t warp;
- the side and ceiling paneling of oiled oak with natural markings is also impressive;
- and, last but not least, once you have switched on the additional Rosi lamp, you can use the reversible, flame-resistant blackout Italian made Trevira fabric with magnetic attachment;
- or the optional outdoor shower with shower tent and
rod shower head.

And because all that must be as it is, we have Moormann’s deck class. It was high time. But it is not on show at the Salone in Milan. Though it should be. But probably Moormann is simply on the road again. (tw)