It is well worth taking a new look at floors. Ten years ago Bazon Brock addressed the issue of the "world at your feet" in his book "Welt zu Deinen Füßen", which he subtitled "Den Boden im Blick: Naturwerk - Kunstwerk - Vorwerk" (The floor in sight - natural work - artwork - Vorwerk). The book was a commissioned piece and explored the neglected dimension of the art and historico-cultural platform on which the world seemed to rest, yet which every now and then is shaken up. "Karl May," Brock wrote, "taught us kids to see like an American Indian does, when we were roaming about the area: one eye on the ground immediately in front of our feet, the other fifty meters ahead. When you ran more quickly it was vital to superimpose the two different horizons of vision. Looking ahead, you see striking structures of the ground. Raised profiles and contour lines. Looking ahead you also see things in an abstract manner. Looking close up you see the specifics, in other words you divide the field of vision into details."

It was an almost programmatic statement for the "Scale" program Vorwerk launched in 2009. Johannes Schulte, Managing Director of the company since 2003, commissioned architect Hadi Teherani to create an innovative design tile. And the result was not a idiosyncratic design but a module offering the greatest possible scope and depth of applications. It is the brainchild of Teherani's design office (with Elke Malek as project manager) and Ina Struve, who is Head of Design at Vorwerk. The basic idea is to abandon conventional schemes in the 50 x 50 centimeter format. In addition to the 1x1 meter format, 60x60 centimeters, there are half and quarter sizes, which make for ideal combinations and building kits to cater for different floor shapes. Not only can the sizes, colors, qualities, three-dimensional surfaces and directions of tread be varied, a special computer-based planning tool will also be available soon. This would allow the production of "images on the floor", says Teherani. All the more so in the "FreeScale" version that can be used to create free-form floors.

While in the past architects and interior designers tried to play down the fact that they favored carpet tiles over fitted carpeting for pragmatic reasons, the tile is becoming a high-quality design element with a status of its own.

Similarly as regards ecology there is nothing to be swept under the carpet. As early as the mid-1980s Vorwerk overhauled its production processes so as to cut water and energy costs, and has since reduced the use of dyes to a precisely measured minimum. Scale also satisfies the firm's own strict environmental standards. The tile has a recyclable textile coating produced with a sparing use of resources.

As of January 2010 Vorwerk has sought to "transform floors into worlds" and its new "transflooring" concept is touring the trade trade fairs: Swissbau (Basel), Contractworld (Hannover) and IMM (Cologne). In Basel, selected ranges of the conference and contract collections will be on show, in Hanover the new design tile collection „Scale" will be center stage, with visitors to the Passagen program accompanying Cologne furniture fair invited to try out the tiles at Meiré and Meiré in Lichtstraße. In "Pure Village" the IMM Cologne is also showcasing a new, high-quality home collection.

"Vorwerk Dialog" will be published to coincide with the "Transflooring" tour. In 1998, the "Dialog" collection marked a phase of public experimentation for the firm, a new way of entering into a dialog with the public. At the time the synaesthetic concepts of the 1980s were formative. It did not matter so much whether someone was an artist, architect or designer but whether he could make contributions to the creative reinterpretation of our world. And could they just! Roy Lichtenstein, David Hockney, Sam Francis, Norman Foster, Michael Graves, Arata Isozaki, Jean Nouvel, Gerhard Richter, Zaha Hadid, Richard Meier, Sol LeWitt, Matteo Thun, Oswald Mathias Ungers and Mimmo Paladino - the list still sounds exciting today. They created large-format patterns, tufted and woven carpets, which no longer exuded uniformity but became interior design elements.

Some of the designers involved, such as Zaha Hadid, opted to realize initial mass-produced carpet series with Vorwerk, others relished in overcoming the divide between art on the wall and the "world at your feet". The creations were documented in a series of publications called "Bodenreform" (Floor reform). And at the time it seemed inevitable. "The floor," wrote Wolfgang Nagel 1988 in Manager Magazin, "was the neutral surface, which patiently tolerated all the ideas and weird ramblings of interior decorators. Experts only ever thought of the floor once everything else had been decided, namely at the very end." The approach was radically new and it met with an enthusiastic public response, especially in the real-estate area there was not much evidence of daring as regards individual design of one's own premises. Vorwerk made the running at the time, but the first wave of post-modern interior design soon faded underfoot.

Vorwerk carpets, which in the past were known above all for their flat, hermetic surfaces, now create new structures on the floor. Carpets with varying pile heights create new attractions both for the eye and for our sense of touch. Compared with earlier collections the color ranges are subdued and reduced to current tones. Felted threads from New Zealand virgin wool literally grew into the room. Carpets now present themselves as three-dimensional interior design elements, as new spatial modules that help to sharpen the tactile senses. It is worthwhile feeling the floor again. Or as Bazon Brock wrote in the publication mentioned in the introduction: "Vorwerk, a production team that hears carpet growing like you and me hear the turf in the soccer stadium." 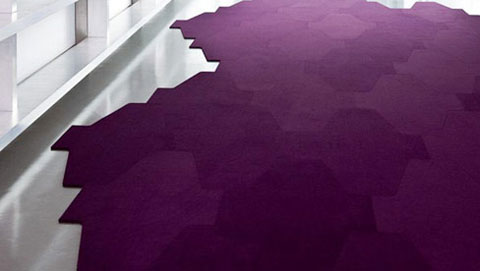 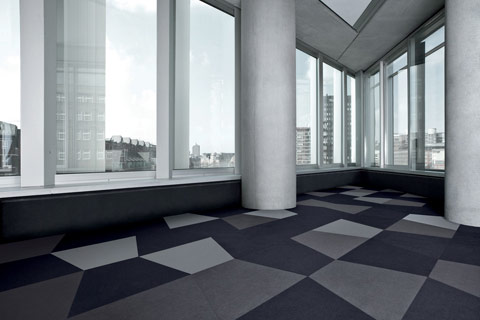 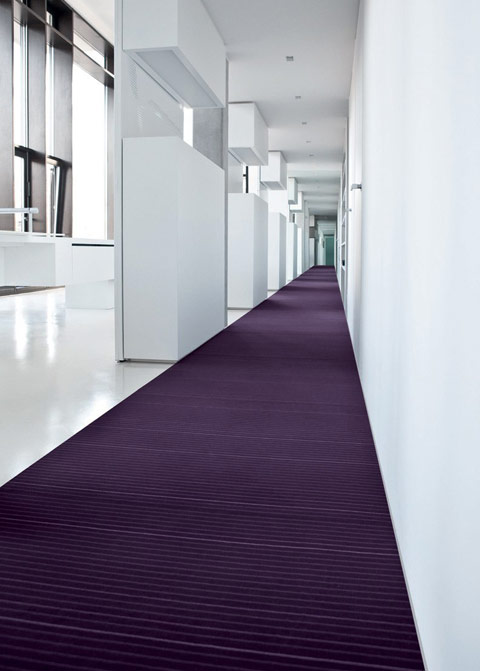 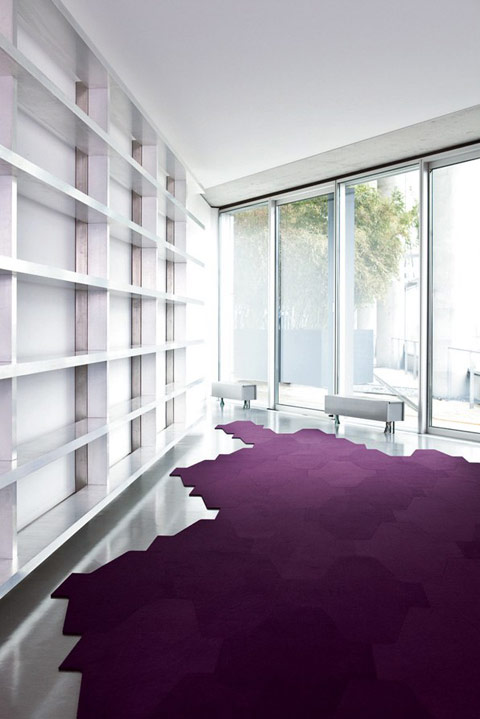 All photos: Scale by Hadi Teherani for Vorwerk 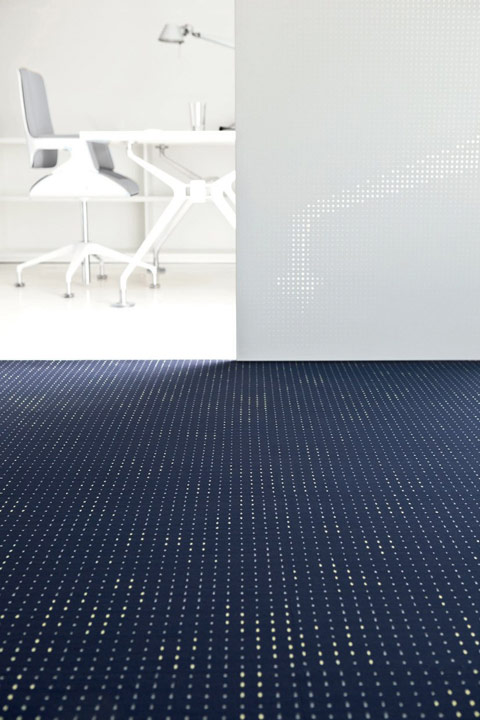 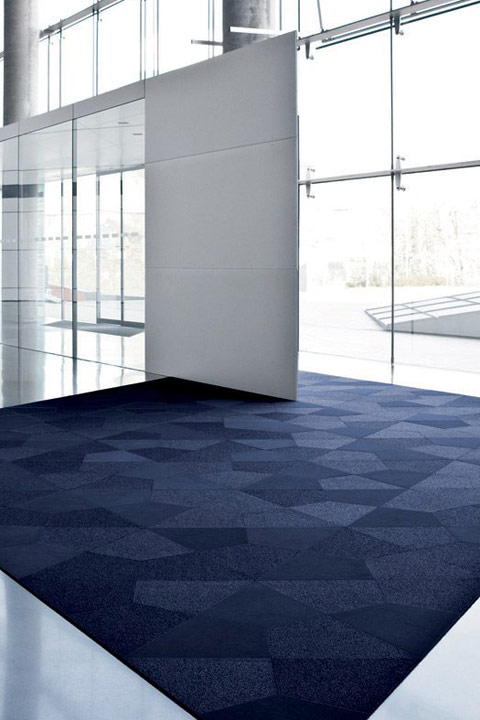