Over the next few years conventional light bulbs are due to be withdrawn completely from the market. We recall that before the Gesellschaft für deutsche Sprache (German Language Society) dubbed "Finanzkrise" (financial crisis) the uncontested "Word of the Year" in 2008, in 2007 "Klimakatastrophe" (climate catastrophe) was also right at the top of the agenda of media attention, equally uncontested. At that time, the conservative Prime Minister of Australia, John Howard, discovered a popular method of symbolic action which some politicians, as is well known, like to substitute for dealing with the actual causes. His method was to ban the light bulb, claiming that it is one of the causes of global warming owing to its high energy consumption, which even to this day climate researchers regard as ineffective activism. So, instead of sitting down and talking about appropriate light and reducing the expensive and senseless pollution of the environment with light in big cities, for instance, Howard called for the abolition of the light bulb. His Irish counterpart Bertie Ahern followed suit, and soon afterwards the EU Commission decided to do away with the light bulb. Conventional bulbs with more than 80 watts are to disappear from the shelves as early as September 1. A windfall for designers and manufacturers who are presenting their latest products at Euroluce in Milan, you would probably think. Yet although ever faster LED panels with ever greater light intensities are being launched and in some cases new lighting technologies are being given traditional guises, there is still no single perfect alternative. For offices, for example, which have a far higher proportion of senseless energy consumption (and thus unnecessary CO2 production) than private households, invitations to tender have hitherto stipulated certain amounts of light instead of setting concrete targets for saving energy.

As such the question is whether the exhibitors and designers at Euroluce and Fuorisaloni will confront the field of tension between energy and beauty this time? Will they present appropriate strategies to address the problems of climate change with new design? The designs circulating in the run up to the exhibitions can be divided into three groups, namely, the orchestration of light, the search for technical innovation, and formal differentiation, in which designers think about technology, but do not talk about it much. Sometimes light needs complex technology and sometimes it radiates from extremely simple casings. It is transitions and intersections that are interesting. They offer far more illumination than just for the material for a short trade show talk.

It is well known that for Ingo Maurer, a single light bulb hanging from the ceiling of a New York hotel was the starting point of his unending search for poetic forms of light. He is still a pioneer when it comes to trying out new techniques and lending them form. By way of example, last year's "Early Future" was his study for a table lamp with organic light-emitting diodes (OLEDs). "It is not any old form that influences our well-being, it is the light," Maurer recently said at a design congress in Sweden. Edison's light bulb, to which he has dedicated several of his designs, is for him a profoundly human product, and its prohibition is thus devastating. Maurer sets accents with his orchestrations "Lacrime del Pescatore" and "Shine on you crazy Diamond" at the Spazio Krizia, to which he invited Borek Sipek this time as partner, as well as with new luminaires which could make the LED an everyday source of light. Also on show are designs that explicitly explore the planned disappearance of the light bulb and playfully act in its defense.

Light in all its unlimited and spectacular forms is the protagonist of the opening event of the Milan trade fair in the courtyard of the Palazzo Reale, for which the Welsh artist Cerith Wyn Evans was selected. His large, mobile neon sculpture "Invocation" is meant to depict a luminescent cloud and generate a reference between the city and trade fair.

Not far away, at Sawaya & Moroni (Via Manzoni 11), the artist Olafur Eliasson will present "Starbrick", his experiment in light modulation and space for Zumtobel. "Star-shaped modules based on a stacking principle can create three types of space", says Eliasson, namely "the solid structure of the module itself, of the negative space in the form of a cubic octahedron in its center, and the polyhedral areas created between the modules during the stacking process." Starbrick consists of sprayed polycarbonate components with a black matte finish. Semi-transparent reflective surfaces at the core are back-lit by LEDs. The module has various lighting settings offering both functional and interior light. Starbrick functions both as an individual object and as a lighting component. "You could even build an entire house of light using Strabricks", says Eliasson in the explanatory documentation.

Luceplan approaches light orchestration from the design side with a modern chandelier made of plastic, designed by the Argentine designer Francisco Gomez Paz and the Milan-based architect, designer and entrepreneur Paolo Rizzato. The luminaire bears the extremely topical name "Hope". Rizzato, co-founder of Luceplan, has been thinking about a contemporary interpretation of the chandelier for a long time now. It was not the form of classic predecessors, but their lighting effects that played a pivotal role in the redesign of the luminaire. Gomez Paz and Rizzato decided to adopt the principles of the Fresnel lens for their design, which used to play a significant role in lighthouses. The secret of this object, which the designers created with assistance from technicians at Carl Zeiss, lies in millimeter fractions and microprisms. The luminaire, which can be disassembled, weighs no more than two kilograms and is initially available in two sizes: with a diameter of 64 and 72 centimeters. And at the center of it all is, wait for it, a light bulb!

The new face of light

Philips is presenting organic light-emitting diodes (OLEDs) to architects and designers at Superstudio Piú (Via Tortona 27). It is thought that the light intensity and durability of these components will significantly improve in coming months. Toshiyuki Kita has designed "Future Delight" for the Mitsubishi subsidiary Lumiotec. The prototypes of gimbal-mounted OLED elements will be on display at Galleria Il Castello (Via Brera 16). OLEDs are already used in cell phone displays. In future they could take the place of bulbs. Flexible, transparent lighting elements would then be integrated into furniture, vehicle interiors and all kinds of spaces. The new branch of Toshiba, which now intends to offer lighting systems and especially LED luminaires in Europe too, is presenting products and projects at the Design Library (Via Savona 11).

Bertjan Pot's approach is rather more experimental than industrial. The Dutch designer is presenting his "Revolving Chandelier" at the Spazio Rossana Orlandi. Its three halogen bulbs are inserted into semi-transparent, propeller-shaped lampshades. All three lamps together are inserted into an outer shade. When the light is switched on, it creates so much heat that the shades start to revolve. The principle is well known from luminaires for children. The designer suspects that halogen lamps might be the next to disappear from the market, after the light bulb, because of their negative energy balance. However, as yet there is still no efficient replacement for halogen light bulbs that uses the entire spectrum of light. The luminaire, which quietly revolves, is being produced as a limited edition of 12.

Forms and other inventions

For Martí Guixé, the traditional, completely white lamp with a lampshade is a pretext. He himself talks of an avatar. For "Cau", his version of the luminaire for Danese, has neither a bulb holder nor electricity supply; instead the just as much classic desk lamp with a long orange cable provides this. Guixé hangs the desk lamp in the befitting shade, which is immediately wrapped in the long cable, and the pendant lamp is finished!

90 years of Bauhaus, the strange anniversary, has also reached Milan. "My Bauhaus is better than yours" is the name of one exhibition by students of Bauhaus Universität in Weimar at the Wok Store (Viale Col di Lana, 5a). It includes a version of the Bauhaus luminaire WA 24, one of the most famous Bauhaus products. However, Lisa Dinges' wooden design emits no light, but at best puts a smile on the observer's face. When you pull on the characteristic "Wagenfällt" string, it becomes clear that this is a wooden puzzle that collapses with a loud clatter. This is another way to get to grips with design history.

The new luminaire "Tress" by Foscarini radiates light upwards and downwards. In his design, Marc Sadler looks to painted fiber glass, a material he has already used in earlier designs for Foscarini. Instead of using even, calm forms, in "Tress" he relies on punctuated, seemingly chaotic superimposition. Seen from a short distance away, the lamp looks like an urban structure.

"Money" is the name of the new family of lights with colorful shades made of blown glass, which Tobias Grau is presenting in Milan for the first time. "Falling in Love" is a compact luminaire that can lie on the table or on a shelf in a kind of nest. Grau completes his range of office lights with the floor lamp "xt-a", a model with a metal casing.

As far as major innovations are concerned, we have already assembled a selection for you now in order to help structure your visit to the exhibition site in advance.

You'll find a summary at: www.stylepark.com. 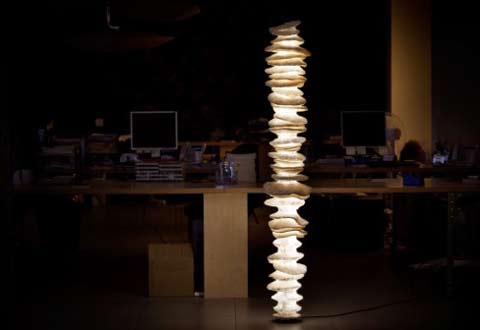 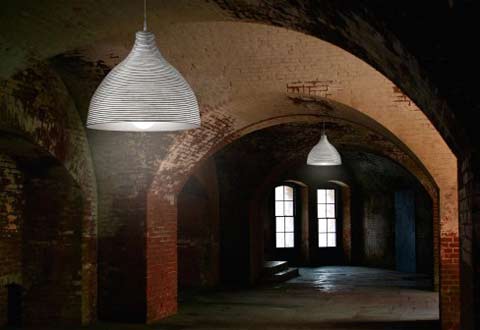 Prometeo by A. Basaglia, N. Rota Nodari for I Tre 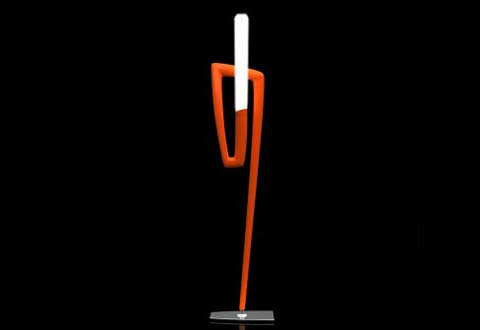 Homology by Giorgio Gurioli for Kundalini 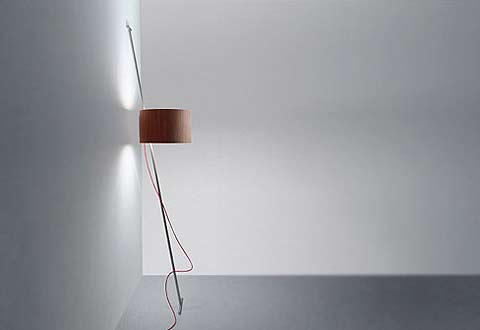 Lift by Fernando Prado for Lumini 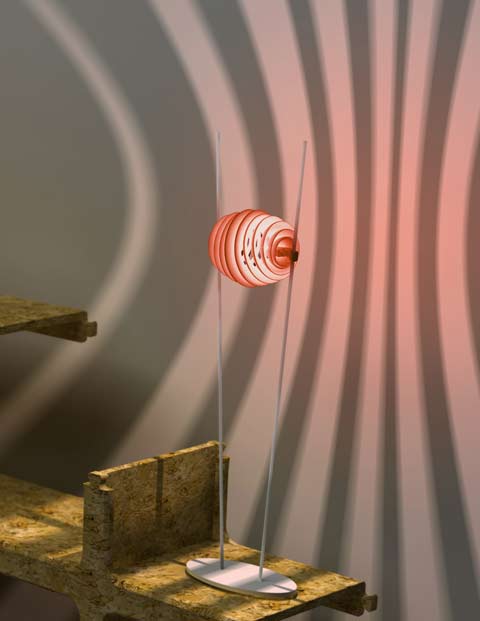 Pink Filament by Janne Kyttänen for Freedom Of Creation
Advertisement