To some people it looks like an overly large stack of Mikado sticks, to others like building blocks stacked haphazardly on top of one another. The newly opened VitraHaus by Herzog & Meuron in Weil am Rhein is composed of twelve elongated buildings with saddle roofs arranged and wedged together in five layers. Some jut out up to 15 meters, most have glass fronts, and inside in particular there are interesting overlaps as the floor slabs of individual house elements penetrate through the gables of the level below.

It is not just the shape of the new building at the entrance of the Vitra campus, however, which polarizes opinion, but also the color. The anthracite facade was already much discussed in Weil am Rhein before it was built. It led critics, of which there are a number in the small southern Baden town, to speak sarcastically of stacked coffins. A Social Democrat councilor sparked off the public discussion by claiming that dark buildings do not fit into the landscape and are therefore an aesthetic provocation. The anecdote becomes amusing, however, when you understand why the local politician felt so provoked by dark gray: "But the model was white!" he argued.

If you are familiar with the buildings constructed around the world by Herzog & Meuron you will know that neither the two architects nor Vitra need to define themselves through specially staged provocations. Evoking the form of the ur-house also seems to make sense because this is a building in which the objects inside will be presented and carefully displayed. Even the dark plaster of VitraHaus is justified in conceptual terms; according to the brief, every building on the Vitra Campus must deliberately be able to display its very own range of materials and colors. It was therefore the express goal of both the architects and client that the new building should set itself off from the nearby Vitra Design Museum by Frank O. Gehry, which is resplendent in white plaster. The difference is noticeable not just during the daytime but also at night when the museum with its aluminum roof, illuminated from the outside, resembles a sculpture. The enormous volume of VitraHaus then dissolves into the darkness and the illuminated front sides of the stacked houses suddenly seem to float in the air.

Not just the facade but also the architectural structure of VitraHaus is structured on the principle of "contrast": A simple architectypal shape, stacked and interconnected, gives rise to a complex and unusual structure. "Opposing elements play an important role in most of our designs, in as much as this is an important component of our conceptual approach. We always attempt to start with something strictly conceptual and from there we develop complexity and a sculptural form," Jacques Herzog explained to the 300-odd journalists from around the world who had gathered in Weil to attend the media conference, no doubt expecting to receive more information on the design. In vain. Right from the start Jacques Herzog made it clear that the older he gets the less he believes that words can do justice to architecture. "I believe that the strength of the architecture lies in the fact that it is so simple," says Herzog. It stands in opposition to virtual reality which has an ever increasing influence on our everyday lives, because you can touch it, it appeals to all our senses, it smells." In a sense, Herzog propagated the "open edifice" which only becomes what it is through its visitors and their sensual perception of it. "When you are here you will either ascertain that it works or that it doesn't. Your individual experience of this place is more important than if we were to describe it and tell you how it is supposed to work." As convenient as this approach may seem from the viewpoint of the architects, Jacques Herzog is right.

The fascinating thing about this interlocking building is the many different vantage points which you can experience as a visitor, both inside and out. The multiform structure allows you to experience the stack of houses from outside in many different ways. The external shape of interpenetrating elements also creates unexpected visual relationships inside, and rooms at times have an almost sculptural effect. The huge windowed fronts which face in all directions appear like visual and emotional intensifiers and when Vitra CEO Rolf Fehlbaum says that he has never perceived the surroundings so intensively as through this window, you know what he is talking about. On one the side, you get a great view of Tüllinger Hill, on the other, of the campus; and once again it is about identifying contrasts while at the same time uniting them.

So if you take Jacques Herzog's advice and let the building have an effect on you in all it facets and sensual qualities, you will undoubtedly come to the conclusion that ... it functions, and it is charming. And it functions not just on its own, but is on an equal footing alongside Frank O. Gehry's Design Museum, Zaha Hadids Firehouse or Tadao Ando's Conference Pavilion. Admittedly though, when you drive onto the Vitra premises, the VitraHaus is definitely the new eye-catcher. 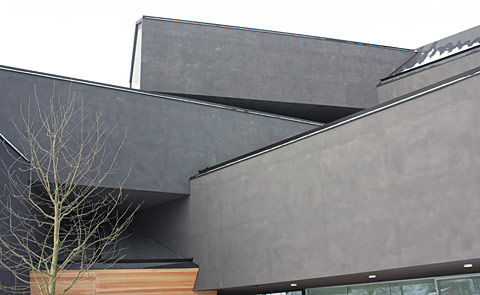 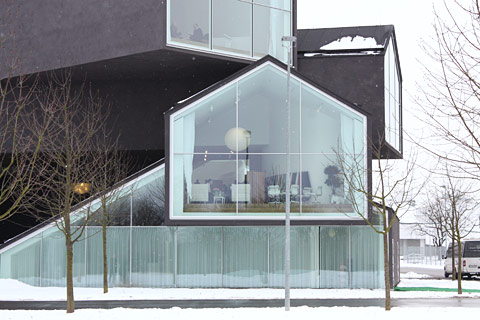 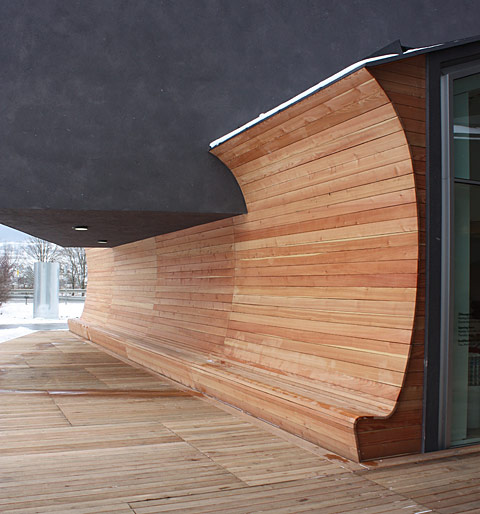 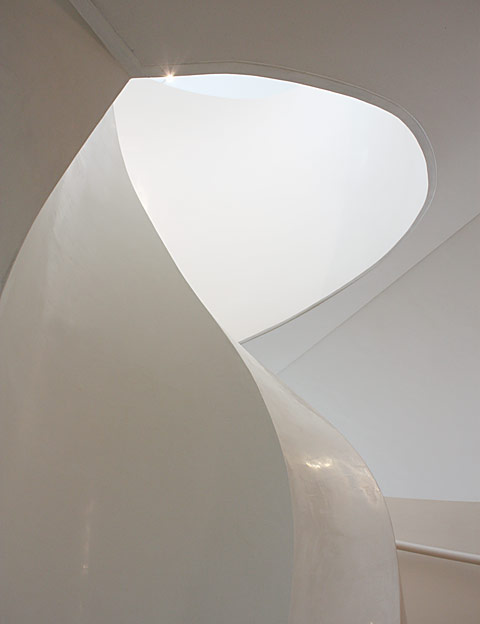 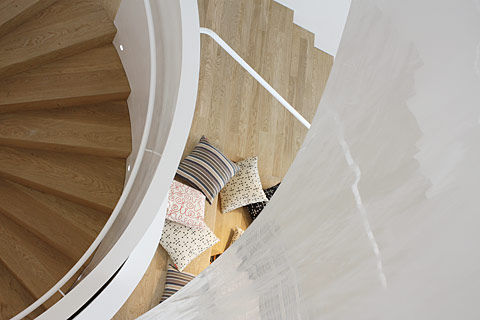 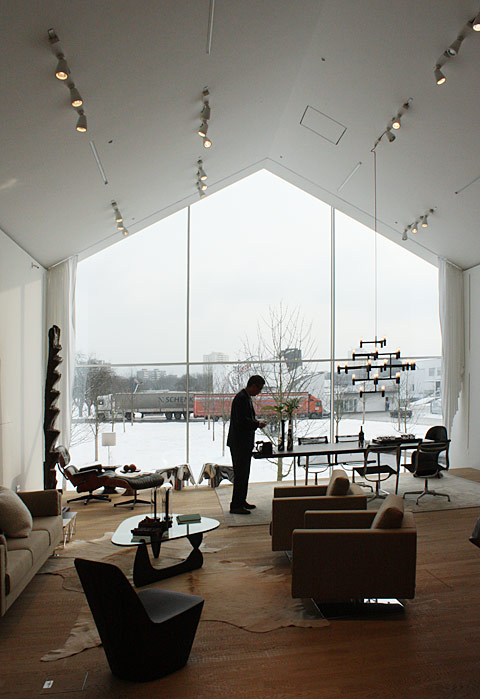 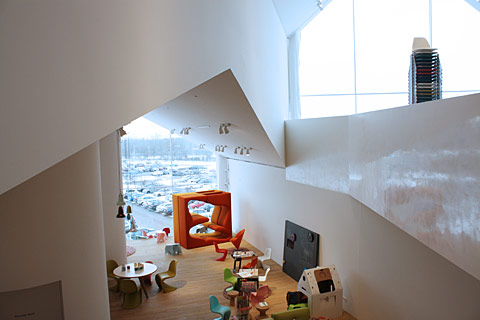 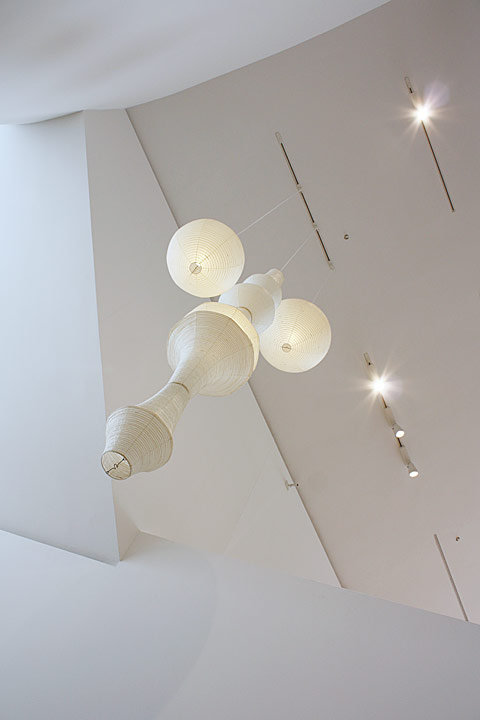 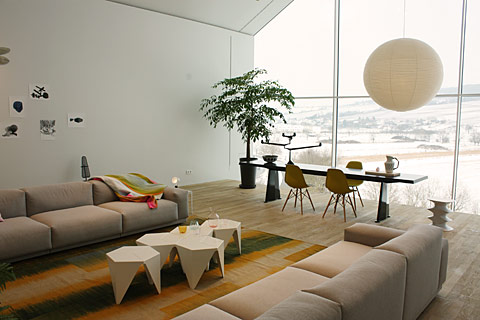 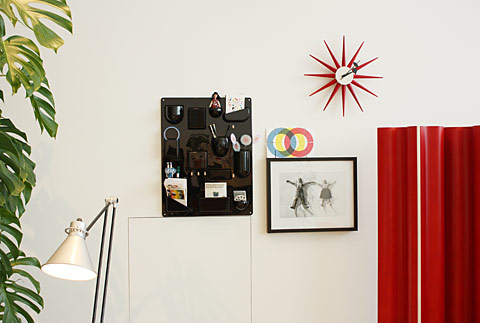 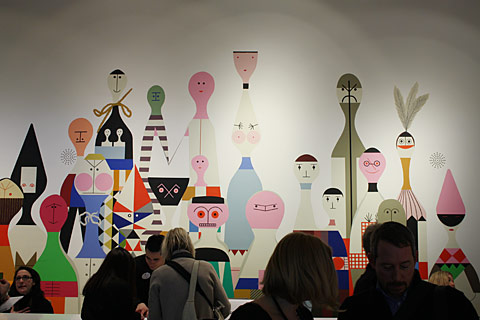 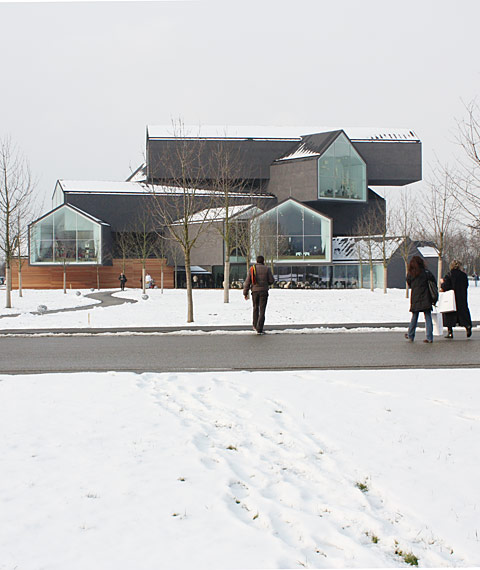 All photos: VitraHaus by Herzog & de Meuron for Vitra in Weil am Rhein, © Stylepark 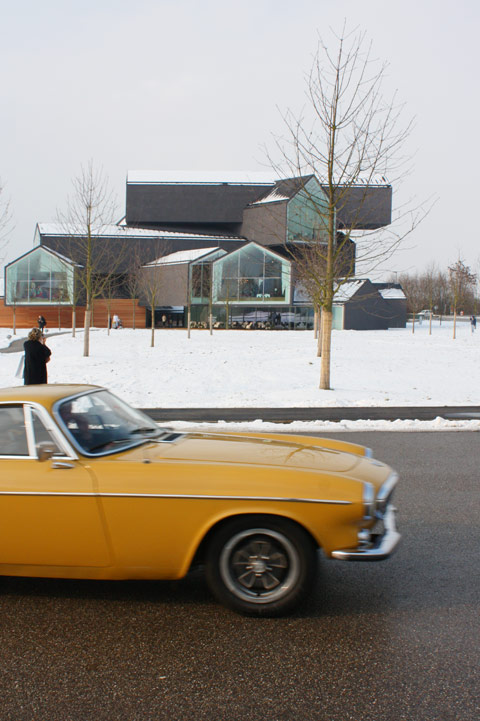 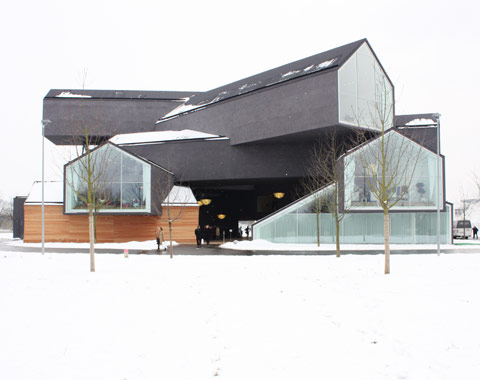 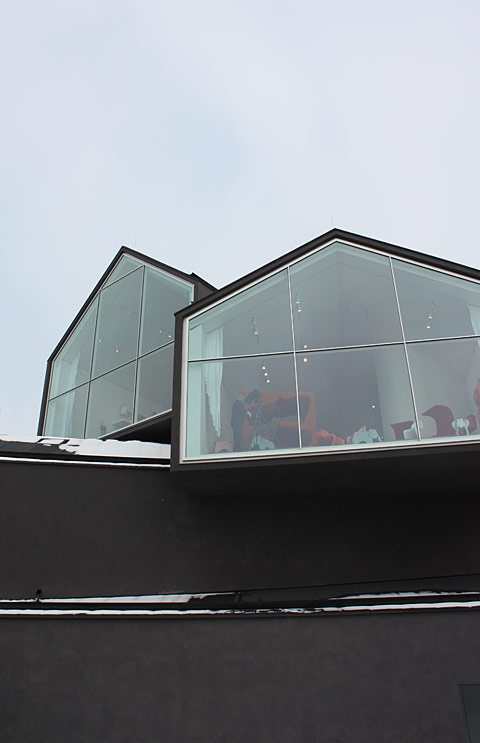 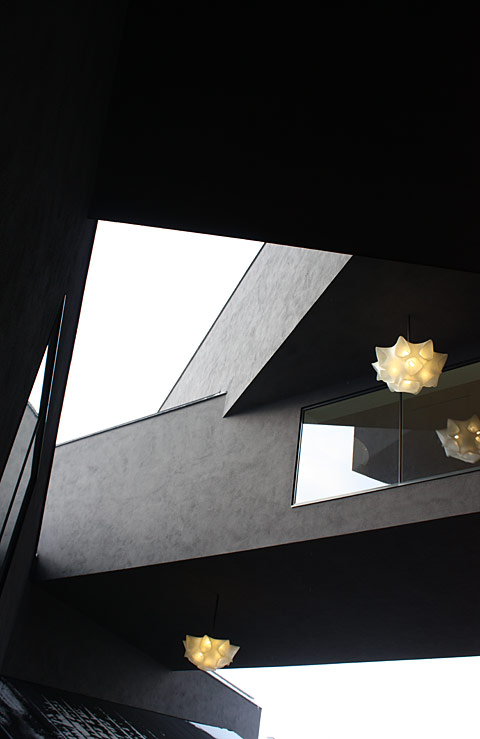 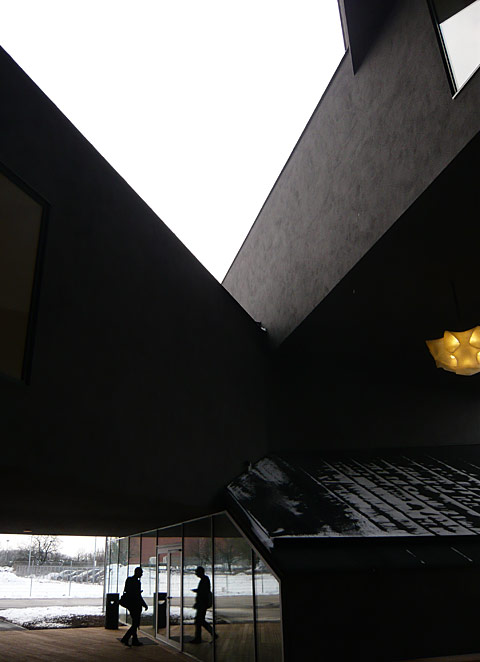 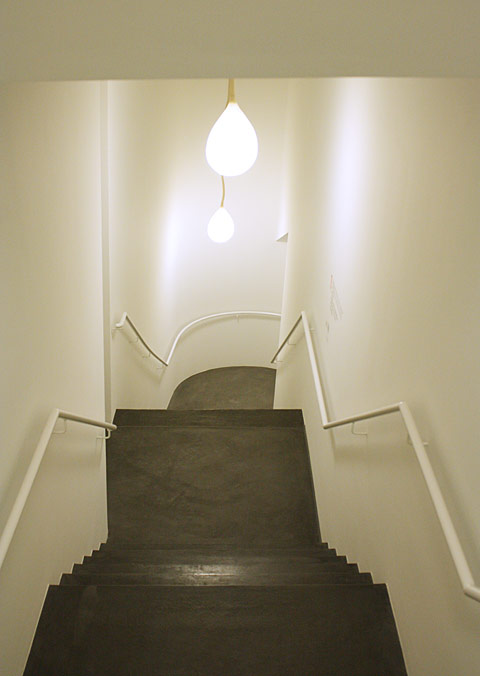 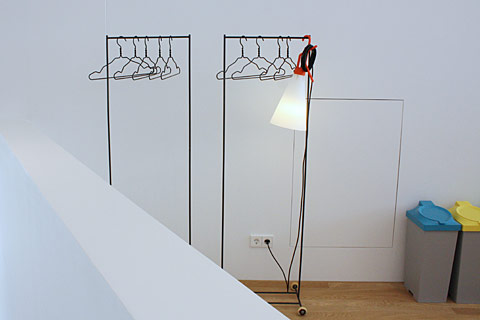 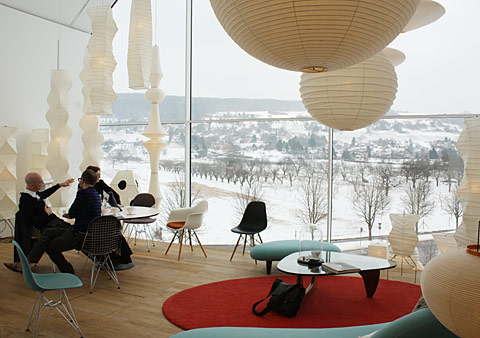 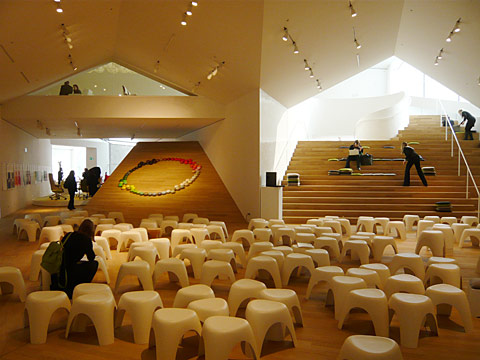 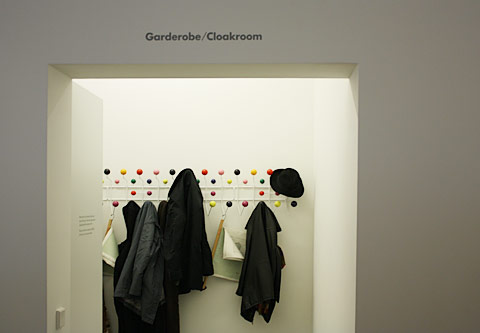