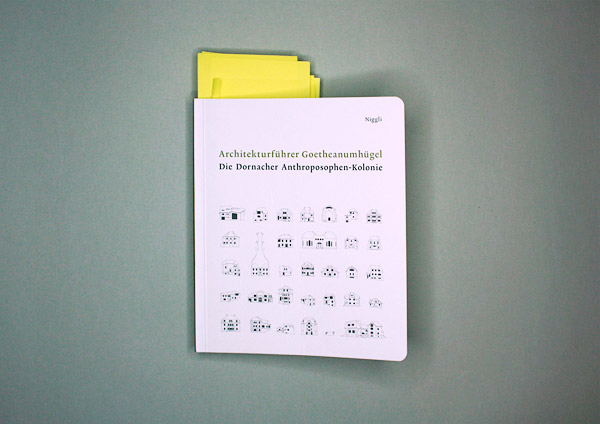 Not much has survived of the original interior. A built-in cupboard here, a door-handle there, a few pairs of shoes and only in a few places does one get a sense of how the room felt. Some of the designs were created by Rudolf Steiner, and others by other inhabitants of the Anthroposophical Colony on the Goetheanum Hill, and in some instances we can only speculate as to whose idea it was. The best preserved spaces include the studio at Haus de Jaager dating from 1921. Thanks to the skylight, the room with its high walls is flooded with daylight, whereby the rays curve along the walls to create playful shadows, complemented by dark areas in windowless bays; at the edge stand sculptures and reliefs and in the middle a table with chairs. Wilhelm von Heydebrand devised wooden chairs with zig-zag legas and backrests specially for Haus de Jaager and these are now part of the Goetheanum art collection. Prior to the exhibition on "Alchemy of Everyday Life" at Vitra Design Museum many of the objects such as the furniture for Haus Duldeck, were in attics or sheds in Dornach as the value of these original items was evidently long overlooked.

How different the impression from the outside. If one approaches the Goetheanum by walking up the hill then you notice an increasing number of unmistakably anthroposophical houses. Roofs alternate between concave and convex; facades consist of interwoven basic geometric shapes; here and there a dome is to be glimpsed. Balconies, windows and doors seem asymmetrical; surfaces consist of several planes with different angles; edges are now rounded, now especially sharp; many shapes "aspire" upwards. About 170 buildings are located in Dornach and the neighboring villages of Arlesheim and Aesch. Most of them are residential and are still privately owned, such as the trapezoidal Haus Berger I or the narrow but long Haus Moser. That said, there are also businesses, such as that of Weleda AG, and there are public entities such as education institutions, clinics, care homes, and more besides. Without doubt, the heating building with the smokestack is best known; formally speaking it brings to mind an out-sized building mast. Not to forget the Goetheanum itself.

For the first time there is now an "Architectural Guide to the Goetheanum Hill", edited by Jolanthe Kugler. The author herself is an architect, the daughter of Steiner expert Walter Kugler, and grew up on the Anthroposophical Colony, and has all the necessary knowledge to write this book. She recommends four tours, each of which goes past about 12 houses. Anyone wishing to explore the estate should simply consult the index, which lists all the houses. Rounded out by three essays: Wolfgang Zumdick sheds light on the historical context of the Goetheanum Hill, Wolfgang Pehnt writes about Rudolf Steiner's architectural approach, and Walter Kugler comments on organic buildings.

In recent years, much has been researched and published on Rudolph Steiner's formal vocabulary from the point of view of design and architectural history, one needs think only of "Rudolf Steiner Design" by Reinhold Johann Fäth. The "Architekturführer Goetheanumhügel" rounds out this discussion by providing information on the surrounding houses that offers a good first idea of them but in many places could have gone into greater depth – above all given that Kugler sets out to "enable visitors to experience the social space of the hill in Dornach". Each house in the tours gets a double-spread. The lefthand page provides technical information on the year, address, use, architect, developer, structure and shows technical drawings. On the right-hand page there's a text on the history of the building and an architectural description, complemented by two or three photos. This layout makes it easier to compare buildings, but the specifics of each individual house (and this is what makes the Anthroposophical Colony interesting as a whole) get a little lost. Here and there, one would like to see more historical images, photos of interiors, additional information on the design process, additional technical details. And often the question remains: What was it like to live in the particular house?

The Goetheanum already lay on walking paths. For example, the Association for Swiss Art History recommends the "Culture Walk Dornach-Arlesheim", which runs from the Goetheanum via the Dorneck ruins, a hermitage, a gate in the rocks and Schloss Birseck to the Arlesheimer Cathedral with the famed Silbermann organ – not to forget the "Schlosshof" restaurant and the picturesque countryside with the ponds, waterfalls, woods, meadows and the cliffs with the paths, caves and grottos in-between. With the "Architekturführer Goetheanumhügel" the one or other person may no longer make it to the Arlesheimer Cathedral, as now we can all know a lot more about the houses and gardens along the way, which always caught the eye, but which little was really known about. And anyone wishing to view the one or other house up closer or even from the inside should simply sign up for one of the guided tours that have been devised as a supplement to Kugler's book. September 2011 saw the first Open Day and the Goetheanum can organize the "Shape and Form of selected colonial houses" on requests. 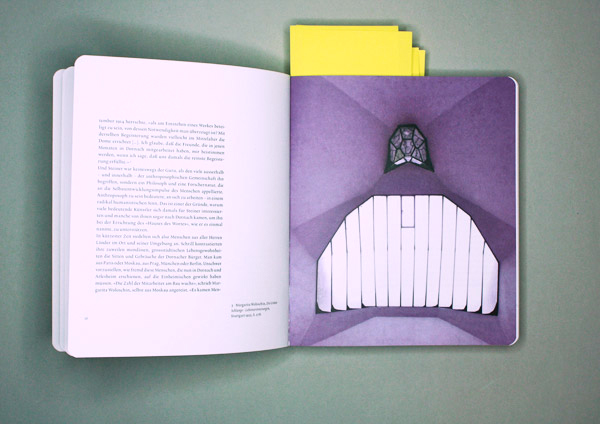 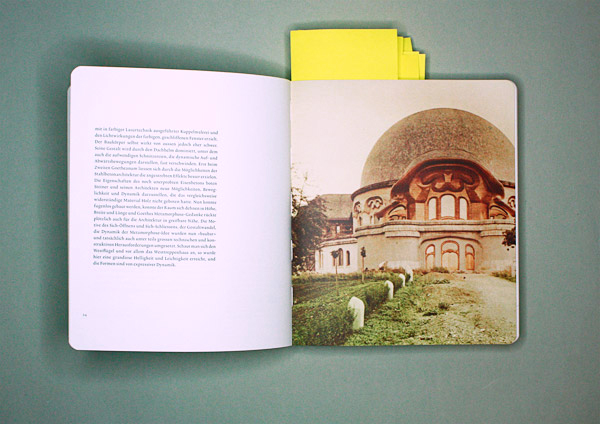 Picture of the first Goetheanum, which burnt down in 1923, book-photo © Dimitrios Tsatsas, Stylepark 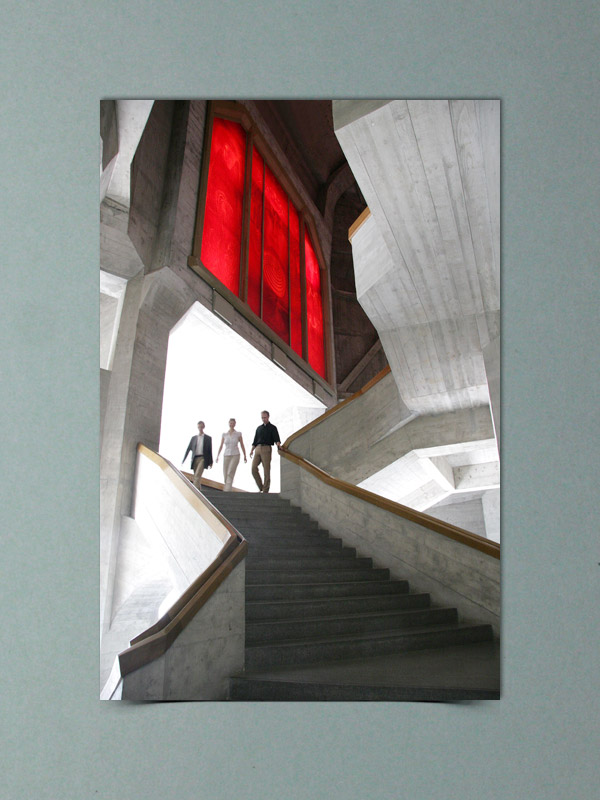 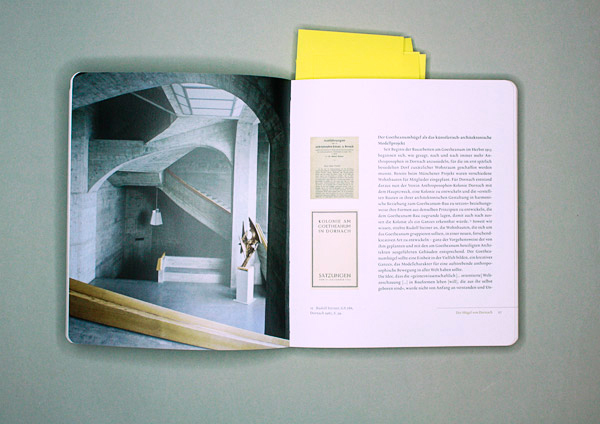 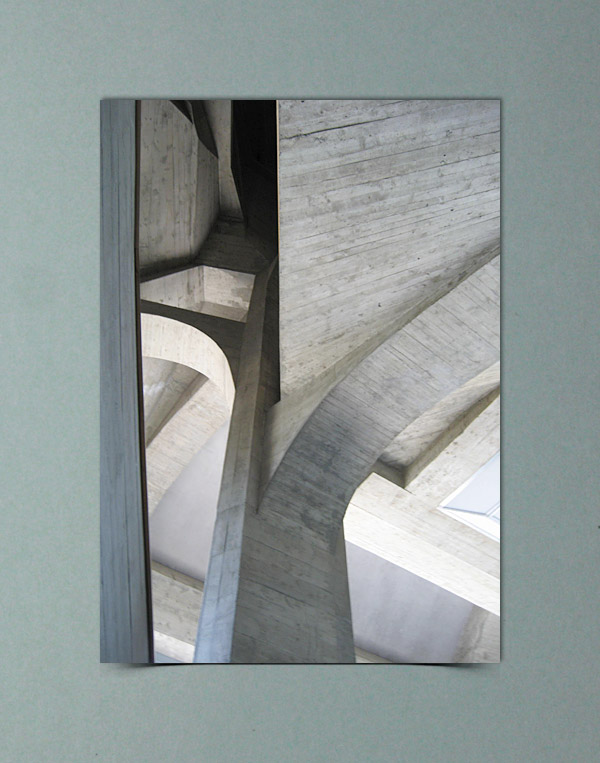 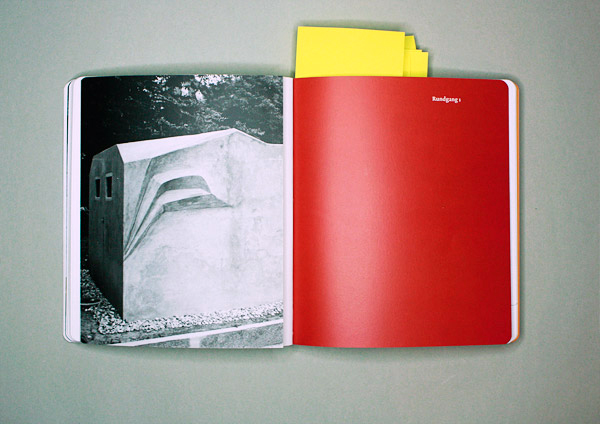 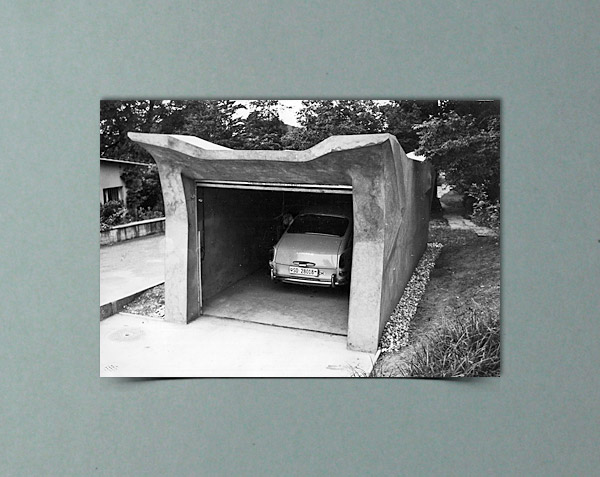 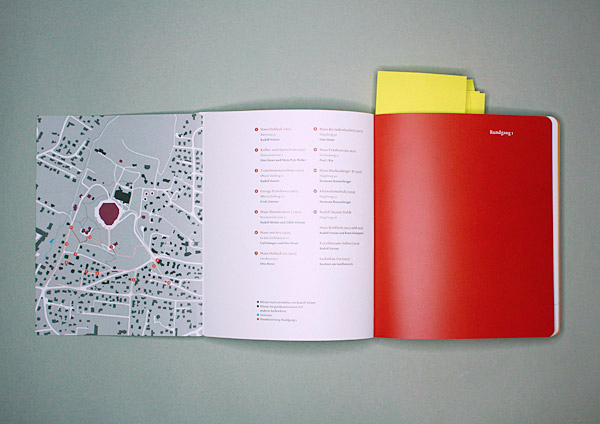 Map of the first round tour, book-photo © Dimitrios Tsatsas, Stylepark 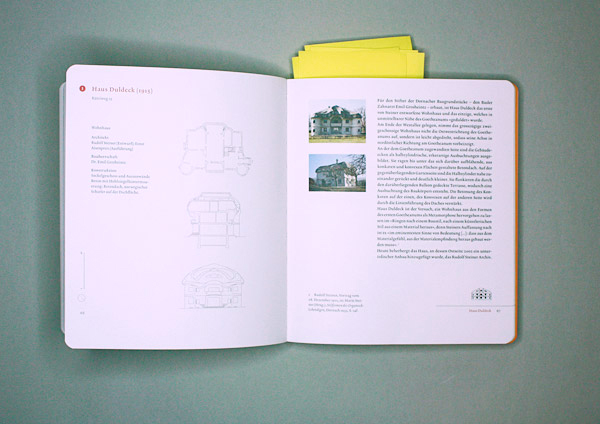 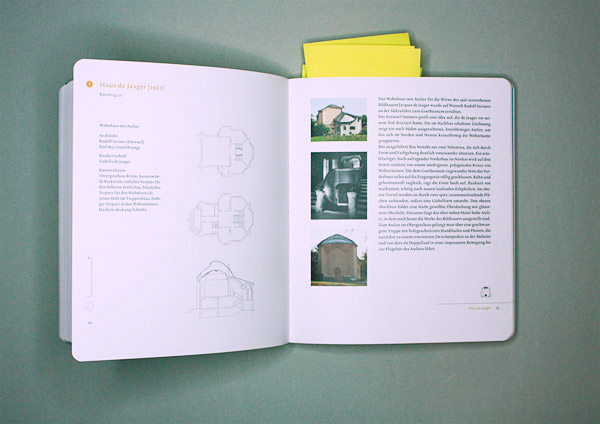 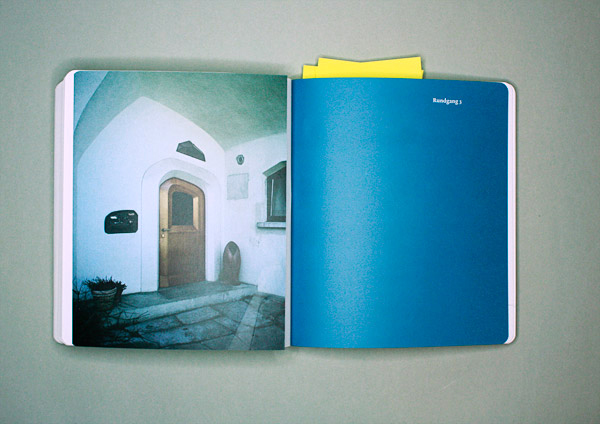 Entrance to one of the houses on the Goetheanum hill, book-photo © Dimitrios Tsatsas, Stylepark 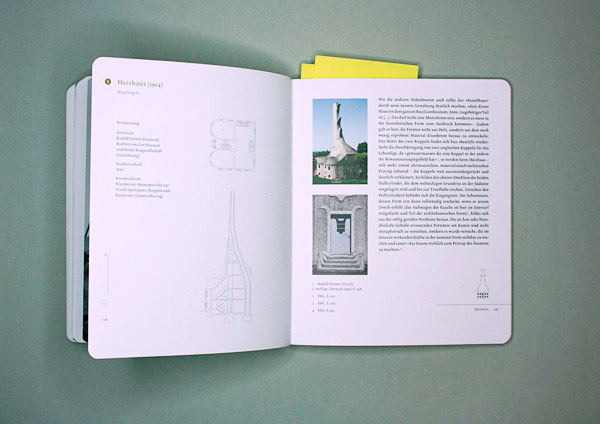 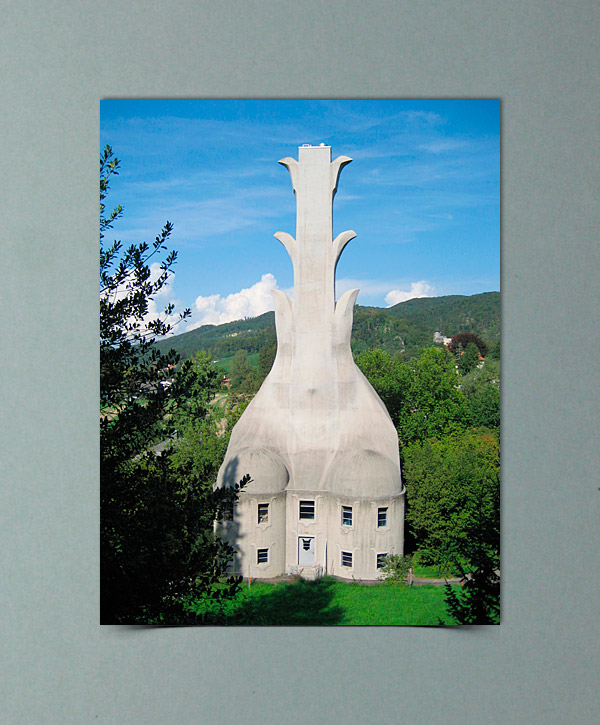 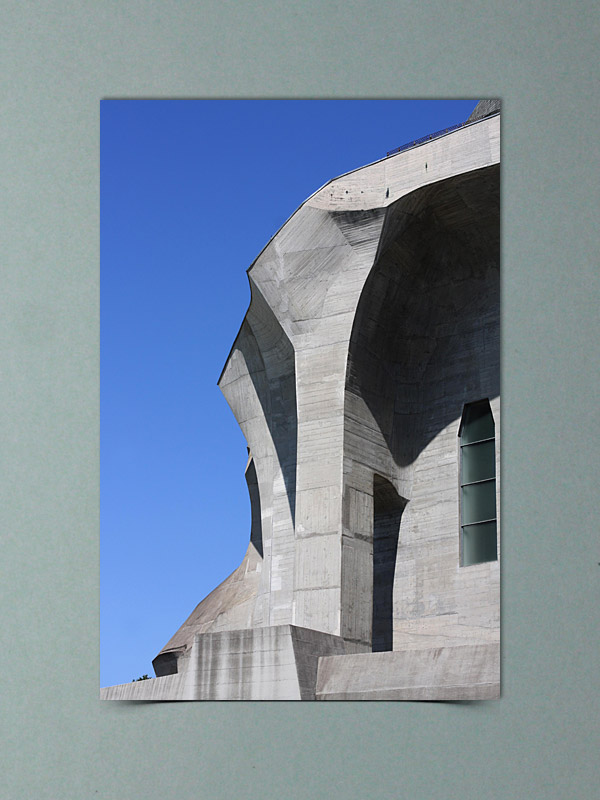 Facade-detail of the Goetheanum, photo © Goetheanum 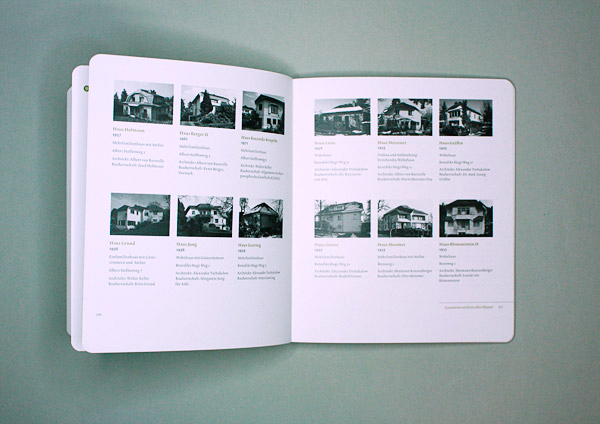 Overview with a number of houses, book-photo © Dimitrios Tsatsas, Stylepark 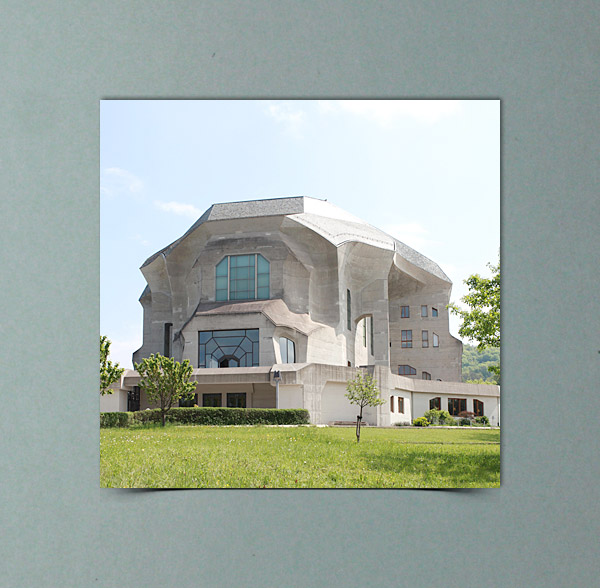 Only a few meters to reach the Goetheanum, photo © Charlotte Fischer 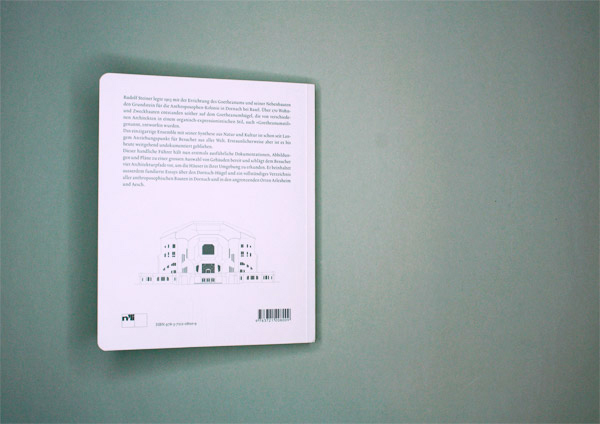