Angelo Mangiarotti: the name might first make you think of a mushroom-shaped table clock on a china base, round marble tables with sanded openings into which table legs slide exactly, organically shaped lampshades in Murano glass that give off a soft light or marble washstands that resemble sculptures. But the great Italian designer Angelo Mangiarotti not only conceived objects but also influenced design beyond Italy's national borders.

Among other things, his late work includes the washbasin series "Lito", which he designed 2003 for Italian bathroom manufacturer Agape. Company owners Emanuele and Giampaolo Benedini, have worked with Angelo Mangiarotti for many years. They even plan to add to their product range other objects, which the still active 90-year old designed starting in the 1950s. Agape has now realized a comprehensive retrospective in honor of Mangiarotti in collaboration with Mantua Province. And as so often happens in Italy a private company is getting involved where public recognition is slow in coming.

Towards the end of the 15th century "Casa del Mantegna" was home to Andrea Mantegna; it seemed the ideal location for exhibiting the work of Angelo Mangiarotti, who in his attitude and universal approach recalls the humanists of the Renaissance. The show features over eighty models, hand drawings, sculptures and photos, which stem from the archives of the Angelo Mangiarotti foundation in Milan. Never before was Mangiarotti's oeuvre shown so extensively.

In conceptual terms the exhibition is divided into two perspectives: "design as sculpture" presents Mangiarotti as sculptor and designer while "design as construction" presents him as an architect and engineer. The focus is on his pioneering work in the field of constructive architectural systems. Rather than being organized chronologically the exhibition sets formal accents. Though this makes it harder to place things in a time context it is appealing. For example, in one room you encounter all the spherical and cylinder shapes from the vase via an eleven meter high marble sculpture to an office tower in Genoa designed in the 1950s.

In another room the mushroom shape dominates, which Mangiarotti varied repeatedly with an extensive series of vases, luminaires and clocks. Naturally, the highlight is the table clock "Section T11", which with its perfect synthesis of sculptural design and function is exemplary of Italian design in the 1960s. Almost forgotten, by contrast, are the three, glazed, cylinder shaped residential towers, which in 1959 sprang up out of Milanese soil on slender legs like mushroom (Via Gavirate 27) and were not only admired by Richard Neutra.

Another shape that has always fascinated Mangiarotti is the hyperboloid, a figure that resembles the butterfly and hour glass. He created a series of marble vases in this shape for Knoll International, glass luminaires, silver beakers and, 1961, also a fifty meter high water tower of reinforced concrete, which since then has asserted itself proudly in the Roman Campagna alongside the remains of the Roman aqueduct.

Another room is devoted to the "leaning form". Here we find objects that come towards us, and seek to serve us like the wonderful, slanting silver decanter (1981), the whisky glass complete with a dint that prevents us swallowing the ice cubes (1986), the slightly curved, glass oil pourer with an etched incision on the lip to prevent dripping (1990), and the washstand "Lito 2", a solid block of marble, which breaks away from the wall and leans towards the user. From here it is just a small step to free design, for example the five steles, which Mangiarotti created 2005 for the National Park "Cinque Terre" (La Spezia): Five stone pillars standing in a circle, which seem to lean towards each other as if in conversation. Here, too, he achieved the leap to a larger dimension: in 1985 Mangiarotti designed a slanting residential tower that fitted in with the slope to the sea (Liguria).

It is fascinating to discover how actively involved Mangiarotti was in the technical development process. He saw it as quite natural for a planner to be directly involved in development of construction materials and the construction. By contrast, today the idea has asserted itself that architects work as artists and primarily create new designs, while he has the experts work out the details.

Angelo Mangiarotti was born 1921 in Milan, where he studied architecture at the polytechnic. From 1953 to 1954 he taught as a guest professor in the Design Faculty of Illinois Institute of Technology in Chicago. He met Gropius, Mies van der Rohe and Konrad Wachsmann, all of whom impressed him greatly. In 1955 he opened his own office in Milan and began to develop systems for industrial buildings. With a long series of hand drawings the exhibition documents Mangiarotti's inexhaustible desire to create and which moved his engineering constructions of prefabricated concrete to a high architectural standard.

Between 1968 and 1976 Mangiarotti designed a series of exemplary buildings in Veneto, above all factory buildings. He set architectural standards, which were sadly quickly forgotten, otherwise Italy would presumably be less of a concrete jungle today. Nobody expects a roof support structure of prefabricated concrete elements to have a special charisma. But all the factory buildings Mangiarotti designed have a certain elegance. For example, in his construction system "Briona 72" (1972) a concrete pillar tapering upwards ends in a square ceiling panel and calls to mind a Doric column footing.

The exhibition in Mantua presents a number of such simple, and ingenious buildings, including the small warehouse in Mestre (Venice),1962 for the company Splügen Bräu . It had sliding walls of corrugated iron, projecting roof and concrete pillars: a modest functional building and yet as dignified as a temple.
The fact that his circle of admirers extends to Japan is attested to not least of all by the essay by architect Toyo Ito in the catalog. He was fascinated by Mangiarotti's elementary style, and spent part of his first grant on a black "Section":"This clock," he says, "has stood on my desk for forty years and it still works." 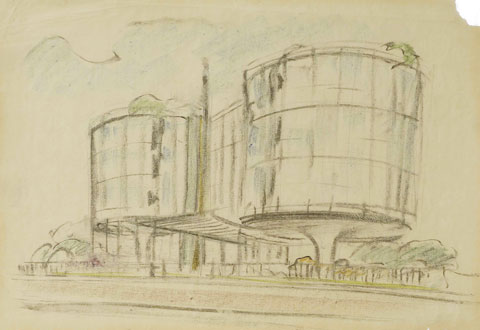 Building, Via Gavirate, Milano, 1959 together with Bruno Morassutti 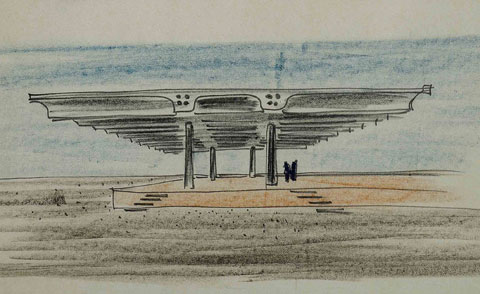 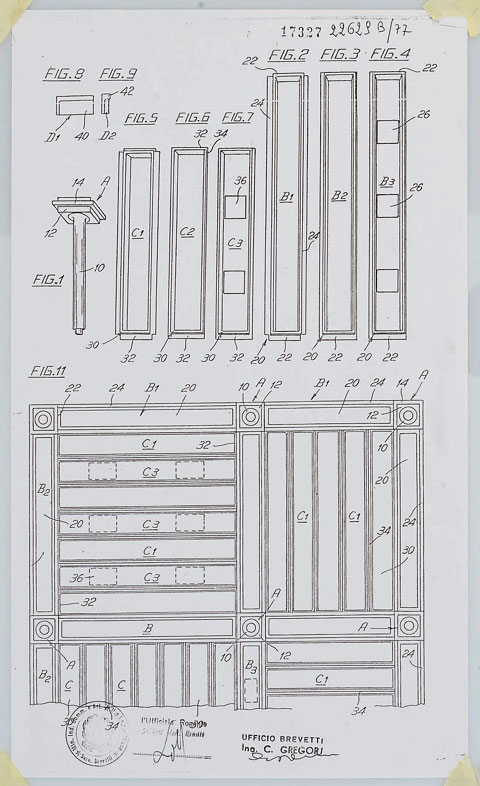 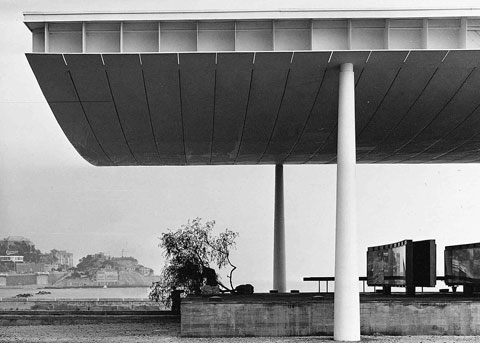 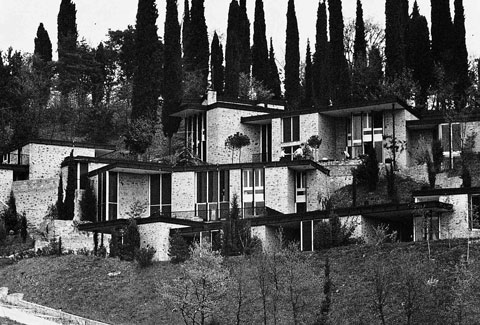 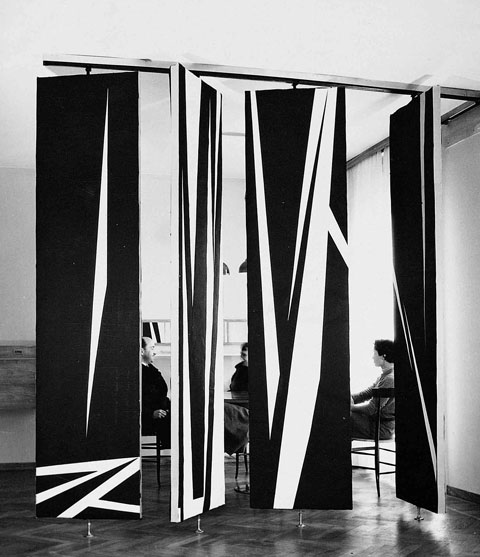 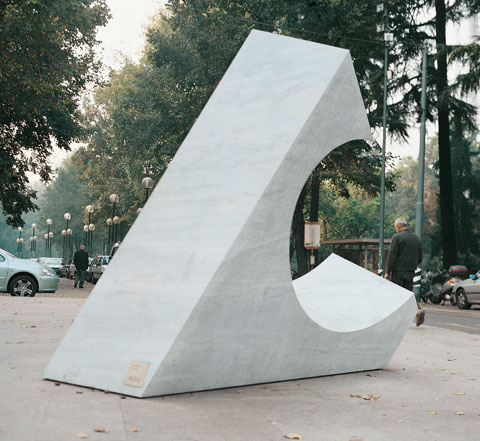 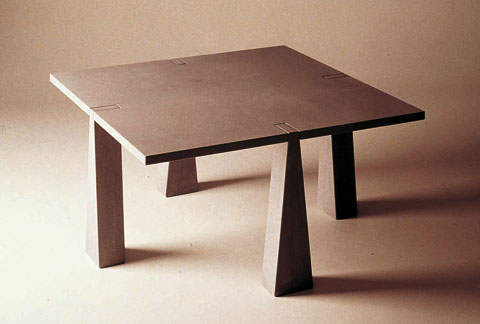 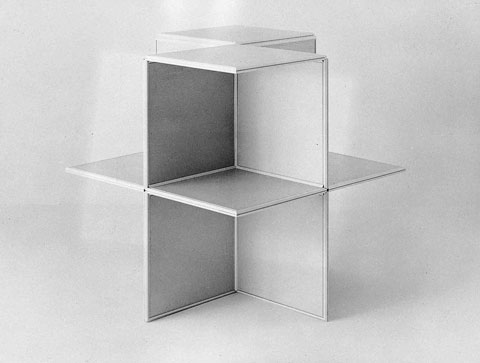 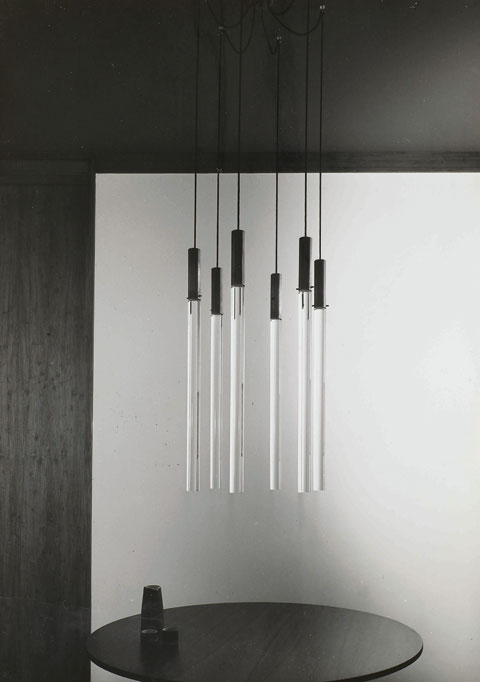 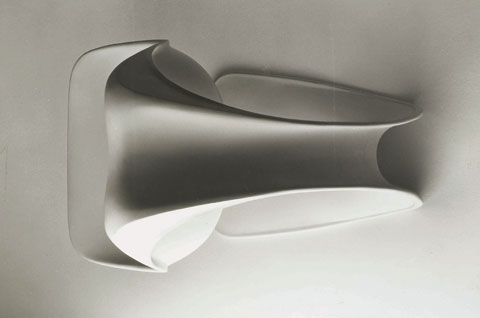 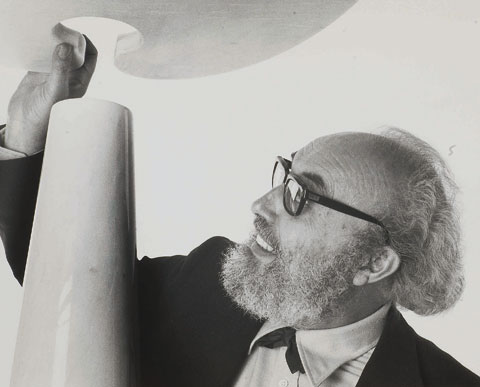 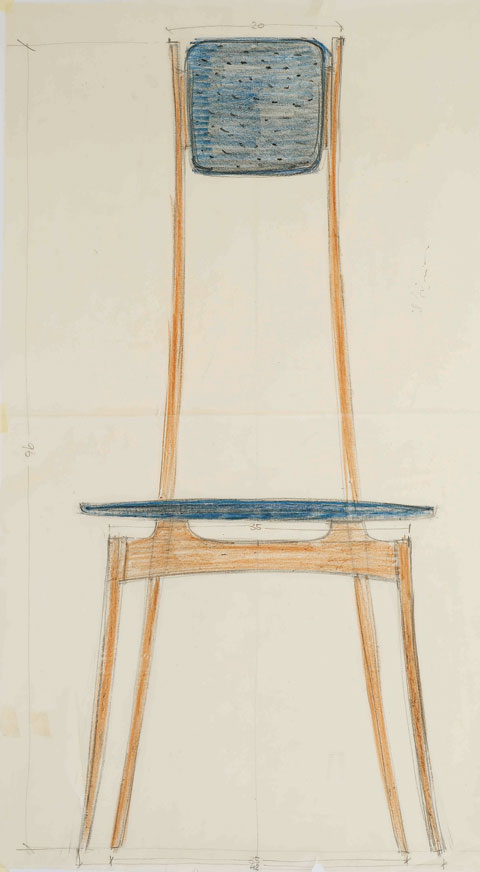 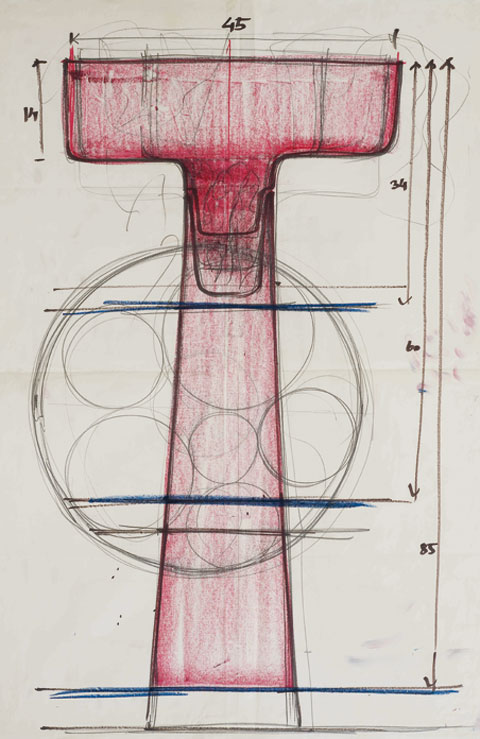 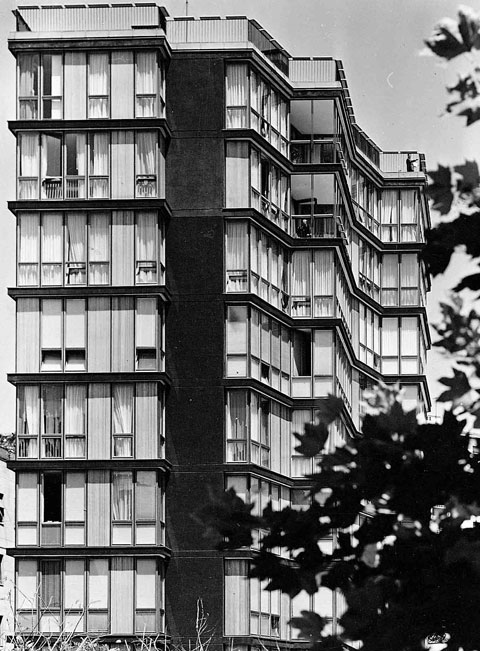 Building Via Quadronno, Milano, 1960 together with Bruno Morassutti 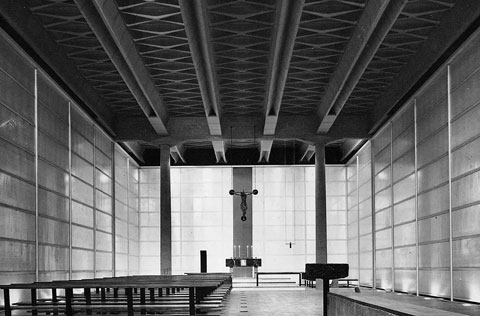 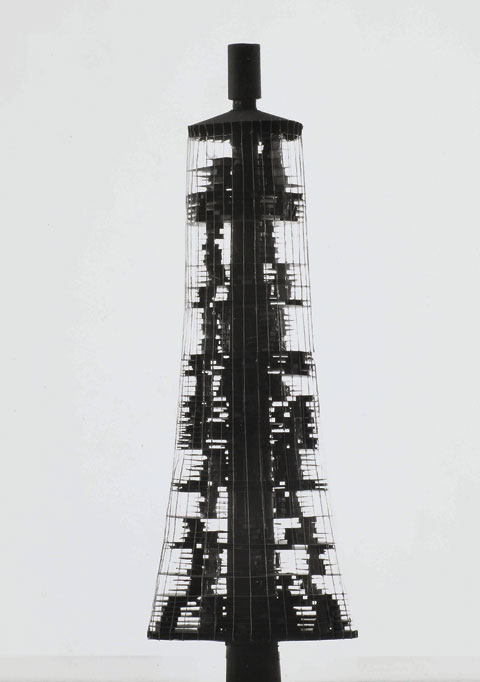 Project for a mega structure, Genova, 1965 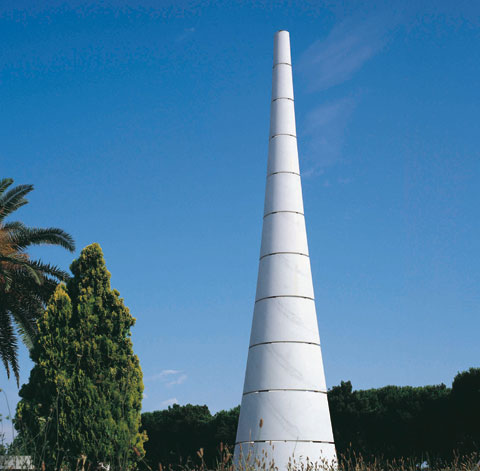 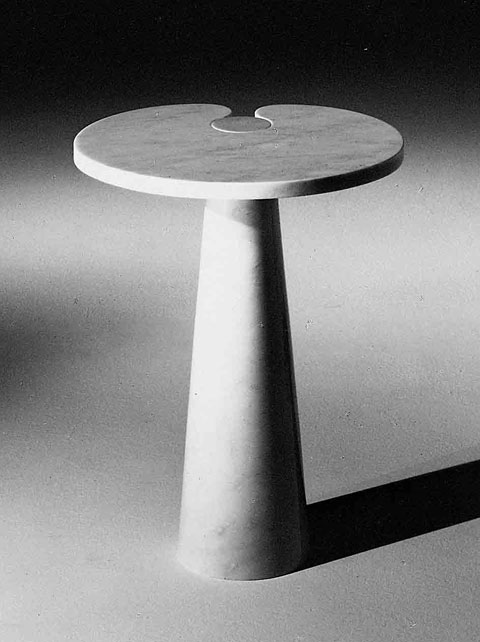 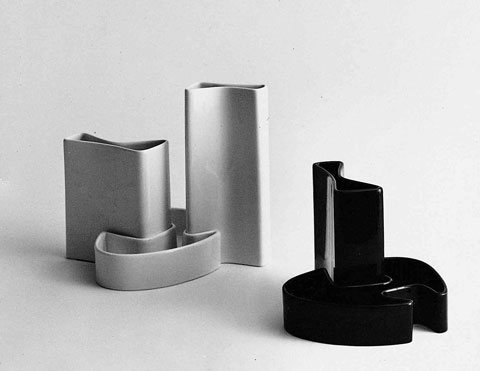 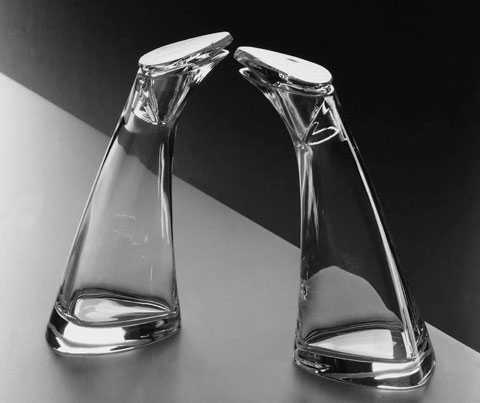 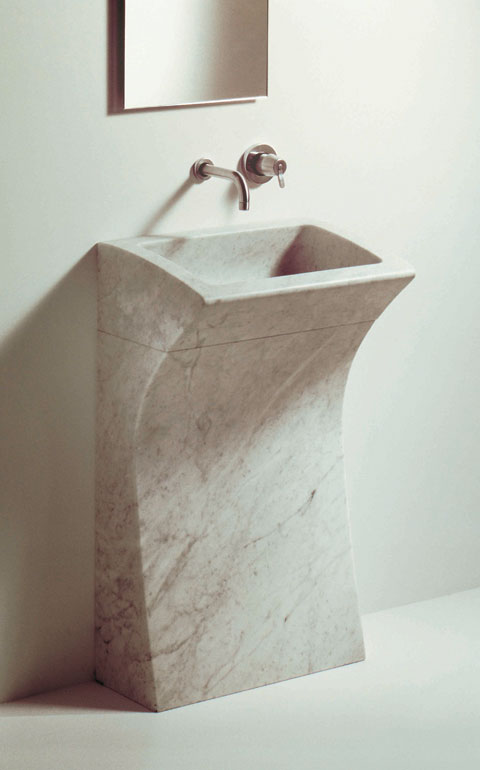