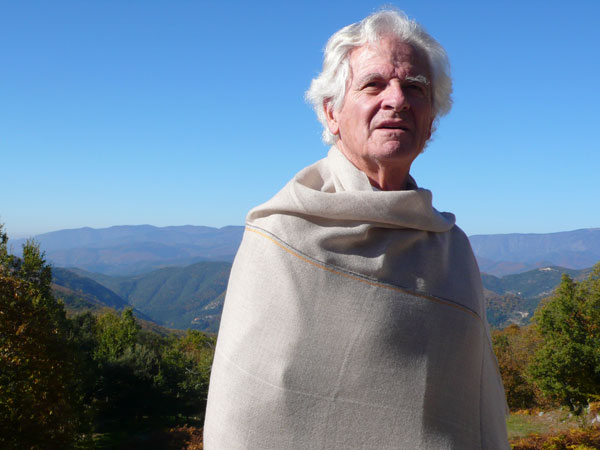 What would the world of design be without Pierre Paulin? Many of his designs have already become timeless icons, avant-garde and classic at the same time. In spite of having every good reason to let people celebrate him as the designer of the Grande Nation, the Frenchman always considered his own achievements to be marginal. A fondness of experimentation and curiosity characterize his unmistakable signature style, be it in the halls for Georges Pompidou in the Elysée Palace or in the curved lines of the Flower Chair made of transparent polycarbonate that was presented only this year in Milan. Pierre Paulin died at the age of 81 on June 13, 2009 in Montpellier. His visions will live on.

"My professional conviction is that I wanted to avoid traditional production," the son of a French father and Swiss mother once explained. This conviction becomes manifest in the furniture and rooms, irons and aircraft interiors he designed, alongside many other things. With inexorable drive Pierre Paulin sounded out the limits of what was possible, and in doing so created utopian but at the same time user-oriented worlds that were intended for normal everyday life just as much as for a banquet given by the French President. Born in Paris in 1927, Pierre Paulin studied at the École Camondo and was, in his early years, inspired by Scandinavian design, Charles and Ray Eames and Florence Knoll. In 1953 he presented his first own furniture collection at the household goods trade fair in Paris. At that time he crafted the CM141 desk - a minimalist desk with slender steel legs and reduced wooden drawers - with his father. Last year Ligne Roset started producing this classic again as a re-edition under the name "Tanis".

In the 1960s, Paulin's experiments with elastic fabric coverings, which he used to cover furniture frames like a bathing suit, made him the uncontested star of contemporary seating furniture. Humor is as much a part of the organic forms of the "Mushroom Pouff" (1963), "Little Tulip" (1965) and the "Tongue" (1967) as the Pop Art desire for clear colors. These undulating seats with elastic textile covers are characterized by gentle psychedelic elements and great comfort. With Pierre Paulin, monstrous oysters and giant mushrooms, tulips and buds made their way into living areas, and their elegantly curved lines proved to be both exciting and in keeping with the environment. With flowing forms Pierre Paulin's furniture curves around the body, enveloping it, caressing it, calling not for an upright position but rather a casual, relaxed posture of the person sitting in it, something highly unusual in the strict salons of the bourgeoisie. The armchairs "Ribbon", "Oyster" and "Groovy" also celebrate upbeat Modernism to the extent that one is almost overcome with dizziness. Paulin's imaginative drawings never lost sight of function, assuming a subordinate role to it. Most designs were the product of Paulin's powerful imagination: "When I closed my eyes, although it worked with my eyes open too, I was able to turn an object I came up with in my mind's eye and even change it. I could see it clearly in front of me, as I can today on the screen. The screen is kind of like viagra for bad designers!"

Pierre Paulin worked for Renault and Citroën, Ericsson and Allibert. Together with the industrial designer Roger Tallon, he set up an agency for "Architectural Design", before founding his own studio in 1979. Pierre Paulin finally reached French Olympian heights at the latest as of the early 1970s with the interior design of the Elysée Palace for the Presidents Georges Pompidou and later for François Mitterand. One a radical modernist, the other middle class, Pierre Paulin conformed to the wishes of both presidential clients and designed breathtaking, befitting rooms. He was officially commissioned to do this by the Atelier de Recherche et de Création, a state institution which was founded by the politician and art publicist André Malraux in 1964 and with it made design a top priority in the Grande Nation. Paulin's dining hall for Pompidou is unforgettable. It is a cave of broken white that curves all around like the inside of a flower's sepals and ends in several thousand crystal rods on the ceiling. Pompidou wanted to open up the Elysée to Modernism, and to accommodate this wish Pierre Paulin created an ensemble of rooms, whose seamless soft waves anticipated the future - a proud, open-minded future that was representative of the whole of France. "The serious framework does not prevent one from being happy. I wanted to express that. I try to give all my creations something casual and relaxed", said Pierre Paulin of his spatial compositions at the Elysée, parts of which have survived to this day.

Today, Pierre Paulin's designs can be found in major design collections in New York, Paris and Sydney. Most of his furniture is still in production, manufactured by international companies including Magis and Artifort. The designer received several prizes, for example in 1969 the Chicago Design Award and in 1987 the Grand Prix National de la Création Industrielle. Some ten years ago he moved from the capital and from then on lived and worked in the Cévennes mountains in the south of France where, according to a French saying, bears live and people become bears. President Nicolas Sarkozy, who, incidentally, unlike many of his predecessors works at an ostentatious Louis XV table, remembered Paulin as one of the design greats. One who knew how to turn design into an art form. Pierre Paulin himself surely would not have been exactly happy about so much pathos from the state. "I am surprised that my work has found so much appreciation", he said only last year, when he was named Designer of the Year at the Salon du Meuble in Paris.