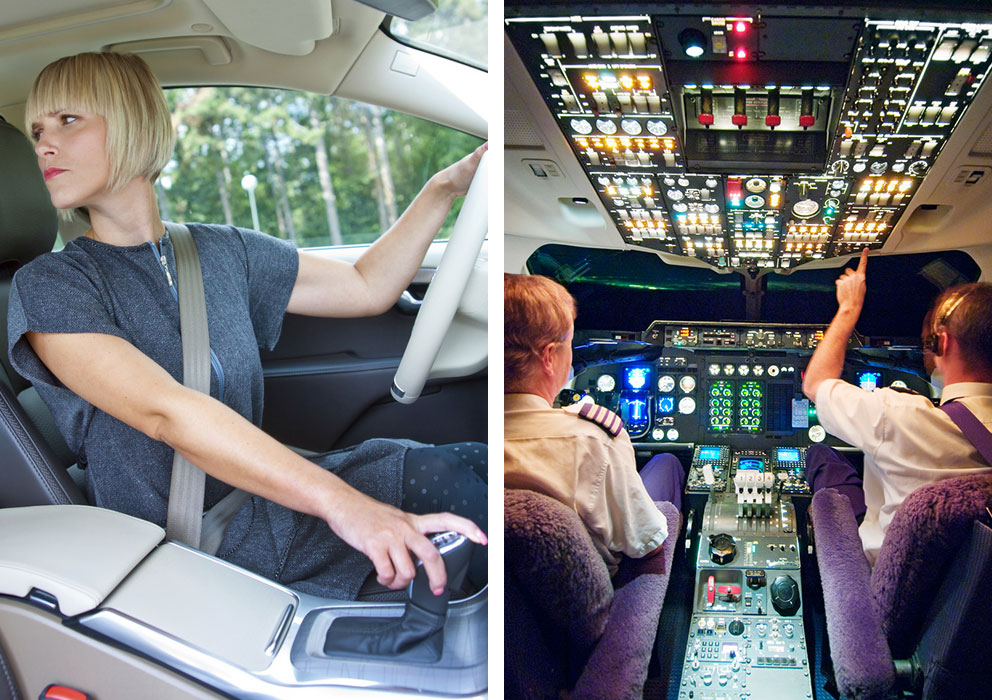 Will future drivers need to have the skills of an airplane pilot? Photo © Thinkstock

Once robots take over human tasks, there is usually a huge degree of scepticism. Alongside security issues, people's fear of losing their jobs plays a major role. It's all the more surprising then how relaxed Germany's driving instructor associations react to the emergence of computer-aided driving. It seems that this sector is not at all worried about the future. In actuality, they are convinced that the driving instructor profession will continue to be needed in the future – more even than ever before.
"In our experience understanding driver assistance systems requires more rather than less training," explains Gerhard von Bressensdorf, chairman of the governing body of German driving instructor associations. Those driving a car using computer-aided systems – which in the not too distant future will be the majority of drivers – will need to be able to understand how assisted steering, cruise control and all the rest actually work.

"These days, drivers actually need to acquire more skills than ever before," says von Bressensdorf, who has been teaching people to drive for fifty-one years. Learning the rules of the road is increasingly assisted by technology. Most driving schools have already upgraded their fleet. After all, being state-of-the-art is a must when teaching the next generation of drivers.
At the end of the day, driving students are free to decide whether they want to use the technological support in cars or not. The vast majority forgo it, says von Bressensdorf. Learners prefer to do even the unpopular parking manouvre the traditional way. "I find this absolutely fascinating", remarks the driving instructor. It seems that relying on a semi-automatic system also requires practice.
In contrast to their students, von Bressensdorf and his colleagues are extremely enthusiastic about the possibilities offered by robotics. "You can incorporate this into an integral part of the educational process, which really works well", von Bressensdo enthuses.
Thanks to sensors, cameras and automatic steering, parking assistance can do much more than just emit bleeping warning signals. When the steering wheel is turning as if moved by a ghostly hand, demonstrating the art of parking, all the driving student has to do is memorize the movement. This makes the learner's first independent attempt much smoother.

Blind-spot assistance and lane-change assistance are also good teachers, von Bressensdorf explains. Their loud signals put a brake on driving students‘ potential carelessness, demonstrating the importance of looking over your shoulder. Sometimes, though, the constant blinking, bleeping and vibrating is simply too much of a good thing. „Occasionally we found that too much support can lead to stress through overstimulation“, says von Bressensdorf. Beginners, in particular, easily become stressed when faced with too many electronics.
An overreliance on technology also carries risks as ever-more-precise systems take the steering wheel out of people's hands. While this is comfortable, and many individuals are more than happy to hand over responsibility to a machine, the danger is that drivers will end up not being sufficiently challenged and may even unlearn driving skills completely.
Indeed, Bressensdorf notices this in himself, he admits. Which is why he now deliberately uses the lane-change assistance, which starts flashing conspicuously in a situation of danger, much less frequently. „I noticed that I had become more careless in watching the road.“
After talking to Lufthansa pilots, von Bressensdorf realized how flying on autopilot can be a dangerous balancing act, oscillating between boredom and the highest demands on performance. Of course professional pilots have to retain an intense level of concentration for many hours on end in order to take over the controls in the case of an emergency. But more often than not, there is also a ongoing feeling of being underchallenged. Drivers may be heading in this direction as well. However, Von Bressensdorf is convinced that "there will always be borderline and ambiguous situations where semi or fully autonomous driving will not work".
So for you in the business world, driving to work while reading the newspaper remains an keen proposition in the future, but the opportunity to relax and read while commuting does exist – if you go by train.