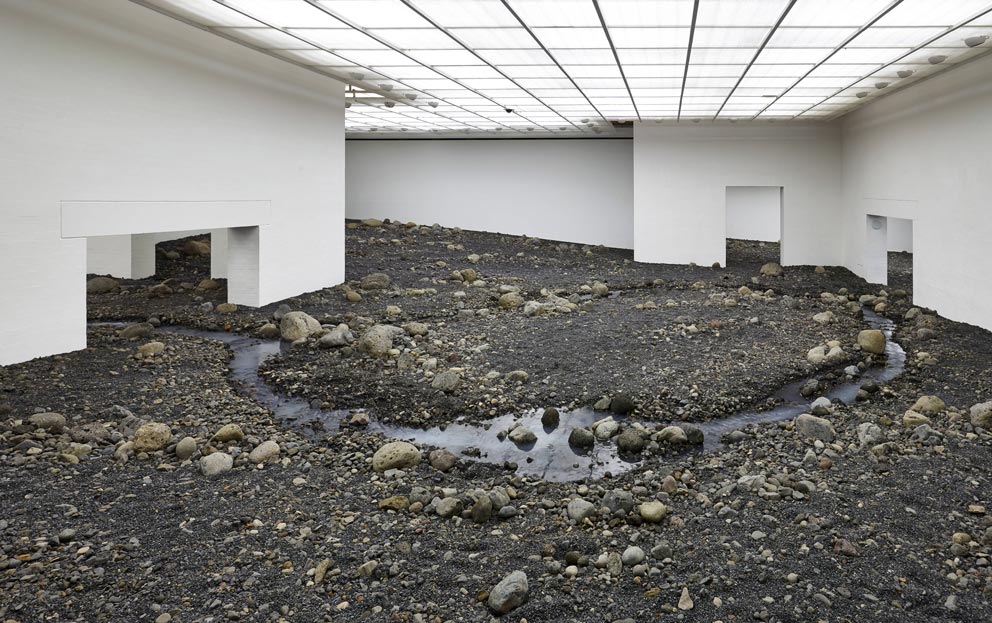 Not without reason do many people feel Louisiana Museum just north of Copenhagen is the world’s most beautiful museum. It is perfectly positioned on the coast of the Öresund, there is any number of sculptures hidden away in the marvelous park round the museum and especially the halls from the first construction phase, which were designed to fit the contour lines, offer a wealth of amazing views out over the countryside and water. Small wonder that Olafur Eliasson was stimulated by the site – and created his “Riverbed” installation for it, which purports to radically and yet simply undermine both the usual way art is presented and our common understanding of nature.

You enter the museum through its south wing, which is in part set under the ground, meaning the carefully tended lawn and a Henry Moore sculpture are both at eye level. The glass corridor with the view out over the picturesque gardens gives way to a corridor of coarse wooden planks that lead into the first exhibition hall, which has been half-filled with grey-black scree. In the next four halls visitors then wander through a dramatically barren hillside world made of loose stone and rubble. To this end, Eliasson had 100 cubic meters of gravel and bits of rock shipped in specially from Iceland. Here, what would have been a radical gesture of denial by the champions of US Land Art in the 1960s, signifying their refusal to participate in the East Coast art business, simply references the location and the architecture. Eliasson didn’t simply have earth poured into the halls and thus provocatively block them as art space, but instead relies on the museum’s existing room sequence.

The 180 tons of rock logistically challenged the museum and a lot of planning was required to distribute them. The steel-and-wood load-bearing structures for the waterfall are no longer visible, but helped cope with the masses of scree and enabled the gradient to rise up as far as the ceiling. In fact, several passageways and corridors are buried under the in part 2-meter-thick layer of rocks. Here at the very latest it becomes clear that we are above the usual presentation level and are crisscrossing the exhibition spaces at quite a height.

The real theme Eliasson addresses with the installation is how we experience space. He expressly wants us to enter the stone countryside and experience it in this way. Most visitors tend to move cautiously across the staged terrain. Some take photos, others restore stones that they have dislodged to the previous position, while kids are less troubled and set about building a little dam. Each visitors changes the installation and (as Eliasson emphasizes in the catalog) therefore views the artwork not as something ‘out there’ but the visitors become an active part of the landscape. Eliassson, as you will no doubt have guessed by now, is interested in perception, knowledge and the conditions for them. 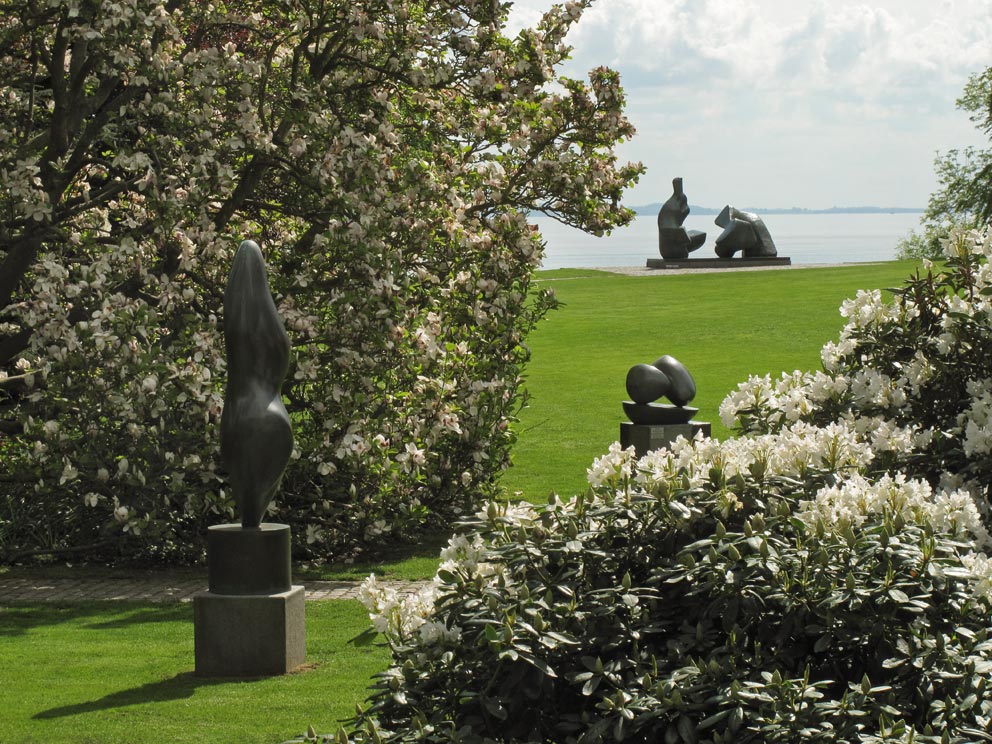 The location of the Louisiana Museum directly on the Oresund appears perfectly and in the beautiful park surrounding the museum a lot of sculptures are hidden. Photo © Louisiana Museum

The installation itself is truly impressive: “riverbed” cuts across several rooms and stories, whereby the rectangular architecture contrasts with the amorphous shape of the scree. The system of coordinates set by the white walls not only delimits the mass of rocks on the inside, as in 1982 the architects Jørgen Bo and Wilhlem Wohlert resolved to bury most of the high exhibition halls in the earth. The installation thus also reflects the topography of the terrain surrounding the museum. Likewise, the course of the riverbed is appropriately positioned, as the south wing is in a slight depression that leads down to the coast. It is no coincidence that Eliasson’s installation is reminiscent of photo series of the barren Icelandic mountains. Not that “Riverbed” opts to imitate the real countryside with basic illusionist means. Instead, Eliasson creates the archetypal image of barren nature as a contrast to the surrounding architecture. Eliasson even shuts out direct daylight: Visitors experience the constant alternation of sun and clouds only through the filter of the museum’s opaque glass ceiling. In other words, you experience the installation only under semi-lab conditions – as an artwork.

The wheels of time

Moreover: The installation changes over time. Stones and pebbles are knocked by feet and roll downwards; others get crushed into smaller bits. Pathways arise, and the topography is changed by viewers. What happens in fast-forward in the museum occurs in nature as a result of changes in climate and temperature, and by human intervention. The countryside is not a static matter, but changes, and that is what Eliasson wants to show us and make us aware of.
The trail through the artificial mountain scree ends with a surprise: If you climb upwards in one of the most beautiful Louisiana Museum halls (it’s a pavilion boasting great glass frontage), you will encounter a fantastic view out over the surrounding countryside and the sea. Invariably you find yourself asking what interventions were made in this landscape and how it will continue to change.

Feel the space: The exhibition “Sensing Spaces” at London’s Royal Academy shows impressive, atmospheric installations on the topic of space, space that wants to be explored and experienced.
(22 Februar 2014) 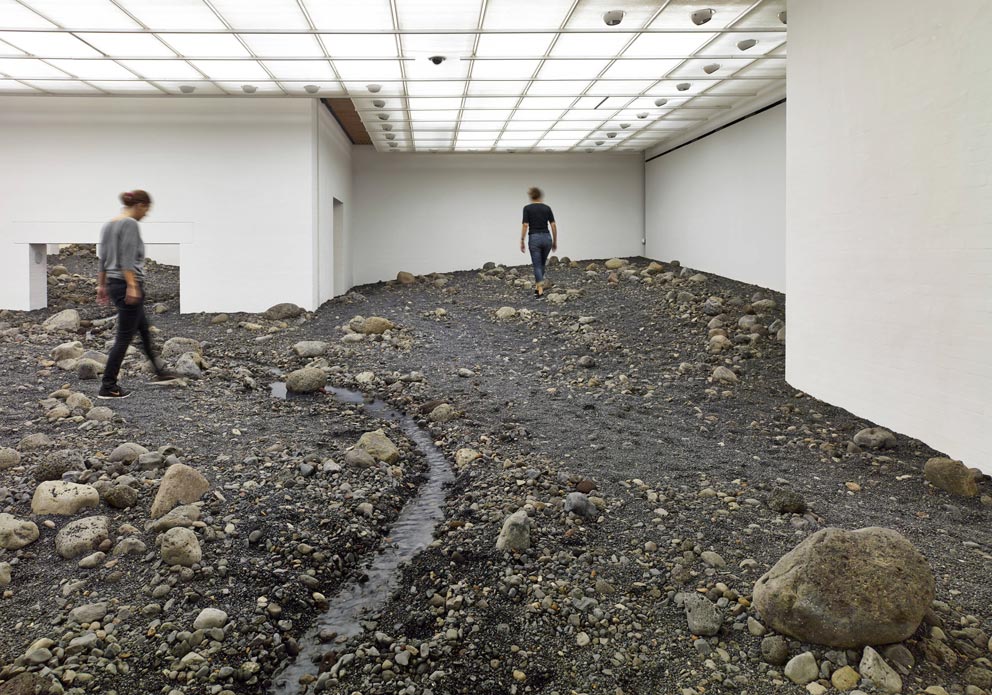 ome entrances and passages in the exhibition spaces are filled up with a two meters thick gravel layer. Photo © Louisiana Museum 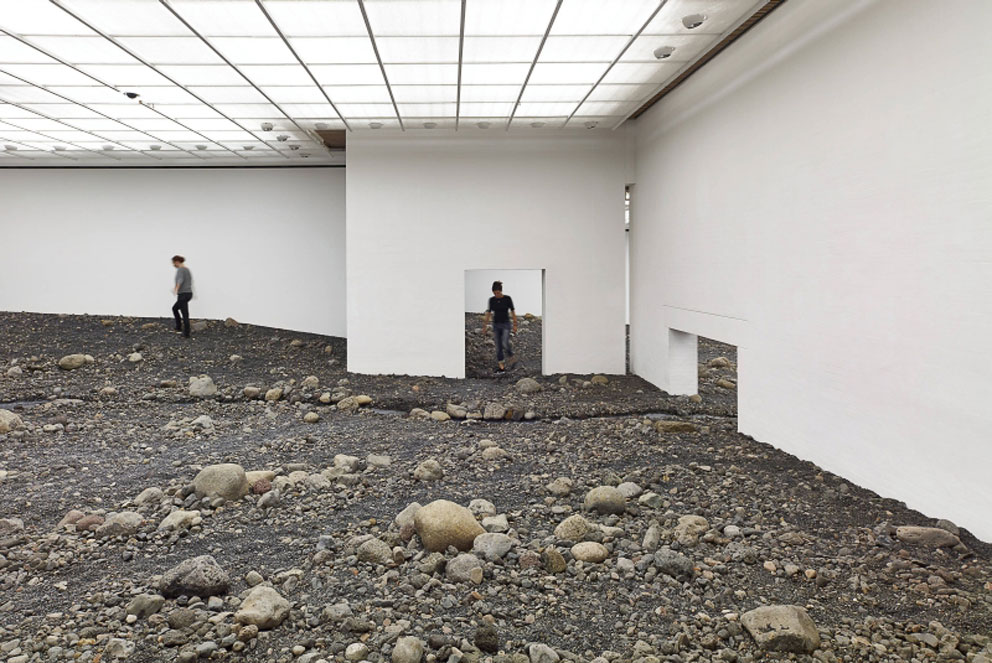 To enter the artificial landscape and to experience it in this way, is absolutely wanted. Photo © Louisiana Museum 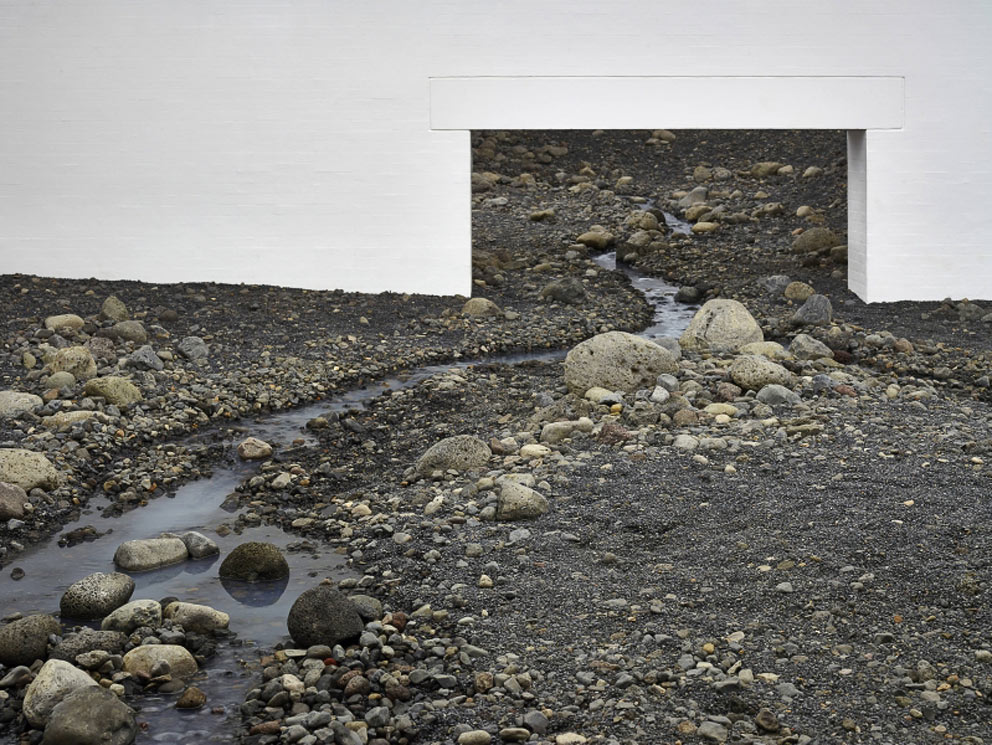 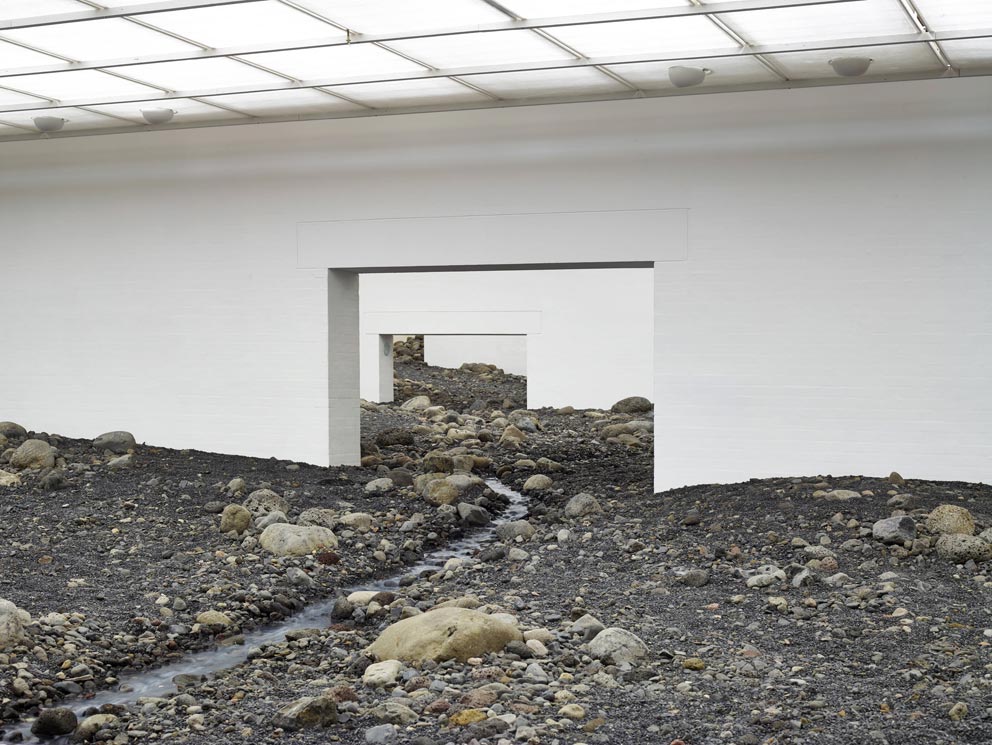 The installation varies in time. Stones and pebbles are unleashed and slide down the slope; others will crush into smaller pieces. Photo © Louisiana Museum 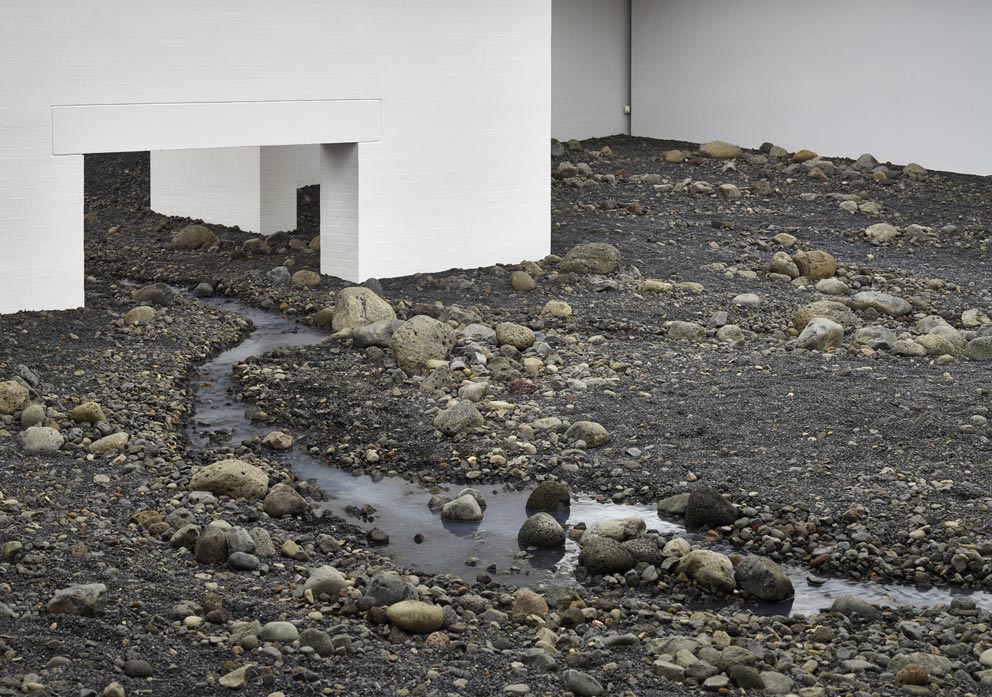 On sites like this the visitors notice that they crisscross the exhibition space in pretty lofty heights. Photo © Louisiana Museum 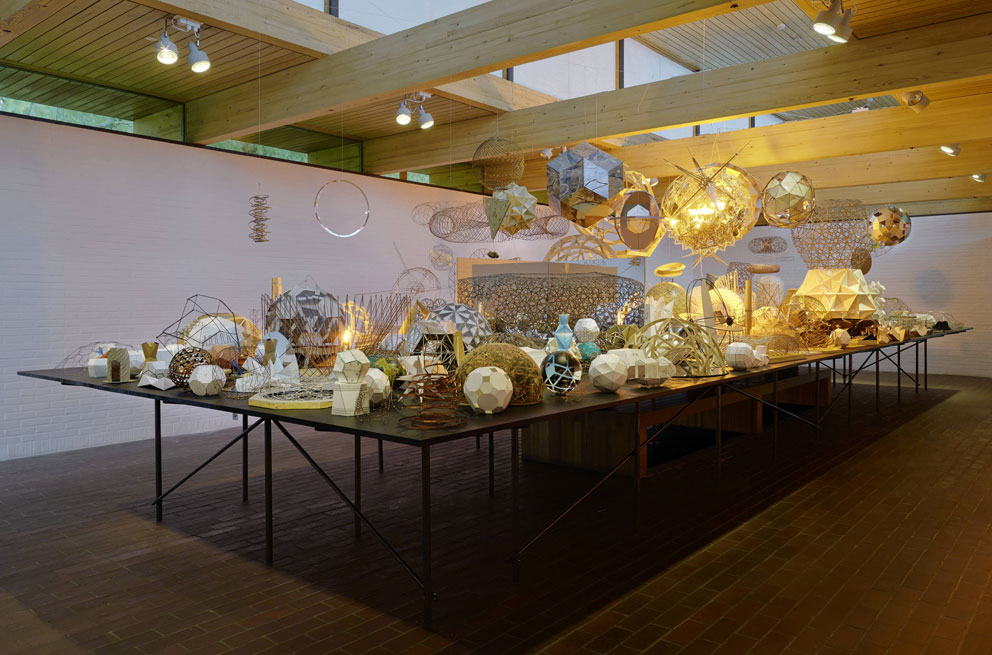 In other rooms, older works by Olafur Eliasson are shown. Photo © Louisiana Museum 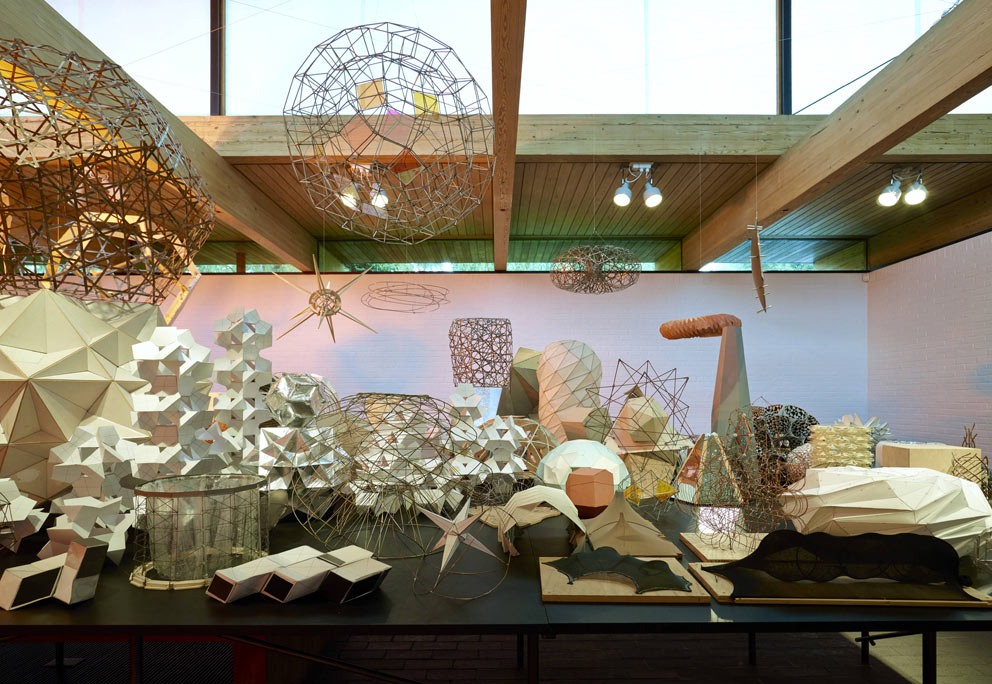 odels for projects and installations proof that the Studio Olafur Eliasson is a busy place with many helping hands. Photo © Louisiana Museum 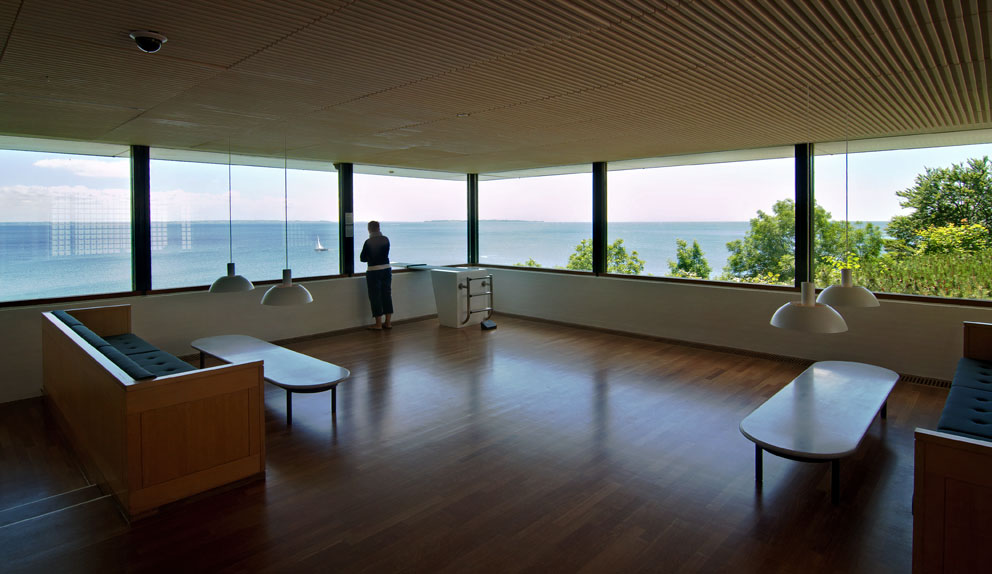 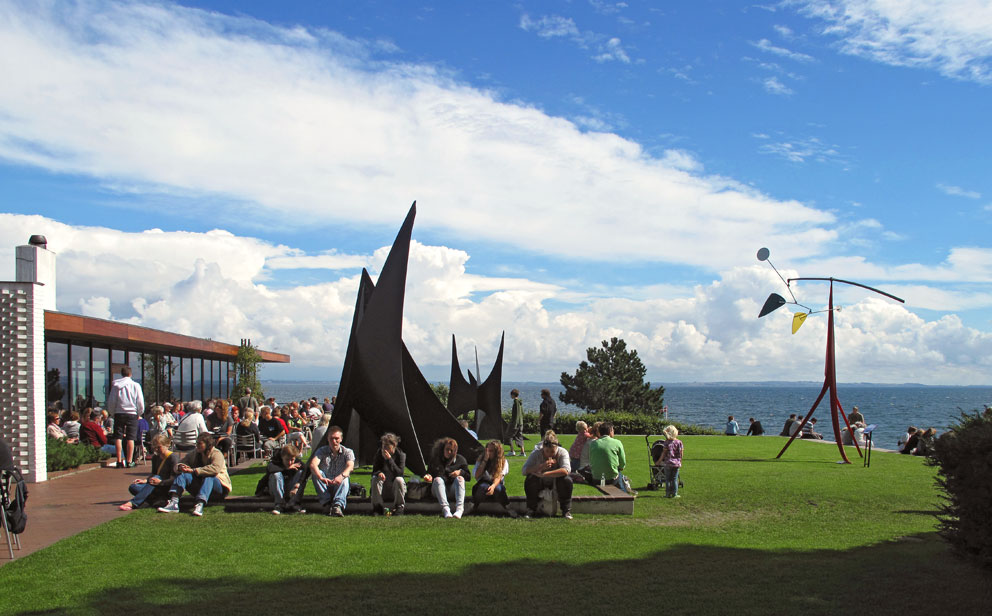 The buildings of the museum and the park are an unique artistic landscape. Photo © Louisiana Museum 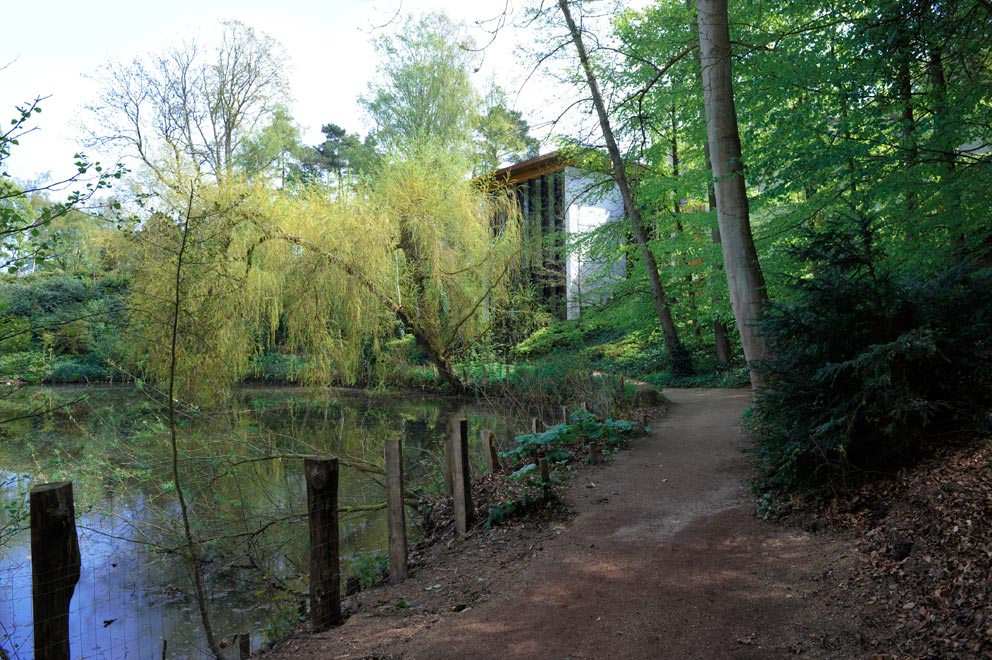 This begs the question, how the landscape will continue to change. Photo © Louisiana Museum
Advertisement