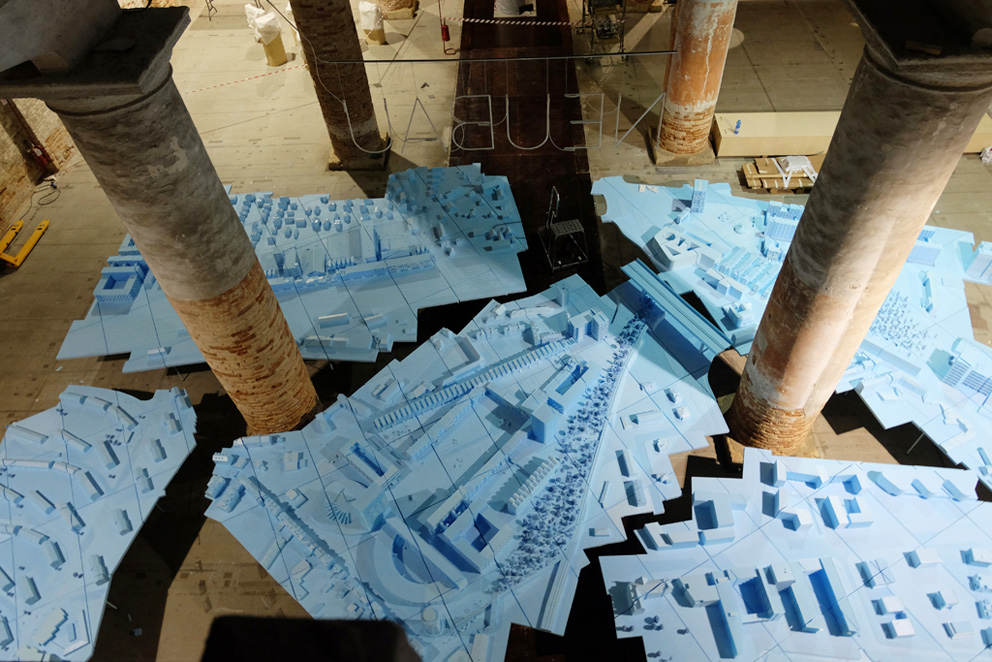 Inside the dark halls of the Arsenale from afar, visitors to the Biennale can see one large word in neon gleaming out: NEUBAU, the upper case letters spelling NEW BUILD in German, and centered above a large model made of blue hard foam that spreads out beneath it. On moving closer, you sense how profound the contribution is. It takes areas studied in five German cities and slides them like tectonic plates into one another on a scale of 1:100 – with a joy for detail that is rare in most such urban planning models, and which thanks to the cut edges of the foam slabs that run right through the model also has the aesthetic feel of a sketch about it.

At the rear left, Jörg Leeser and Anne-Julchen Bernhardt (one of the partners of BeL Sozietät für Architektur) are stooped under the model. The first visitors have already bumped into a corner and it now needs gluing. But he nevertheless finds time for a brief interview.

Jörg Leeser: No, no. But there really are a lot of people here for the opening and we didn’t reinforce the corners. After all, we want people to be able to get up real close and it’s supposed to be more of a working model. So the one or other dent is simply part and parcel of things. 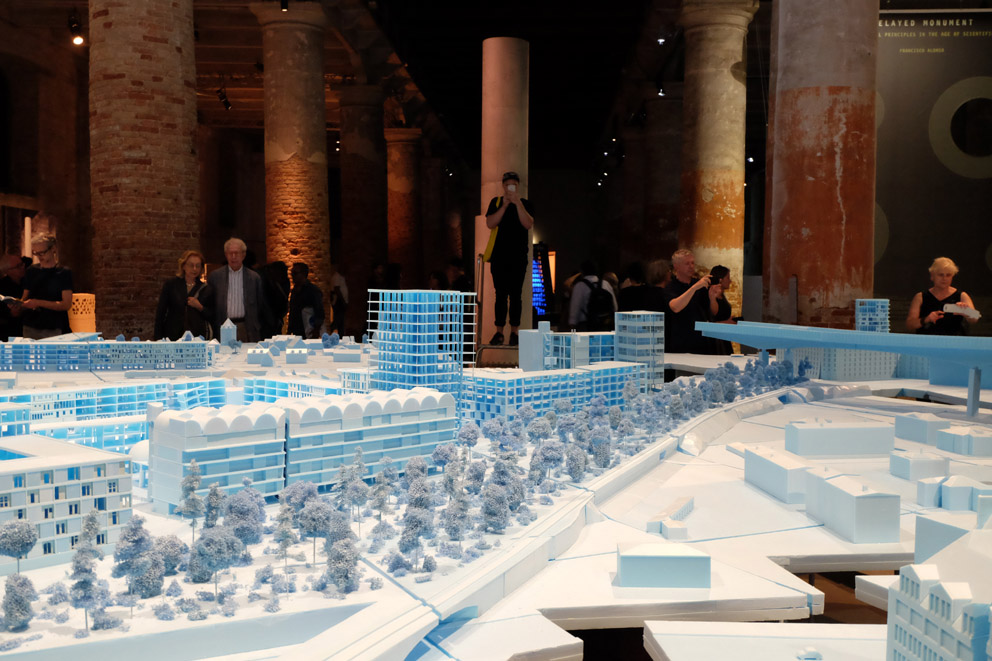 An aluminum ladder in front of a blue landscape made of hard foam helps visitors get a better overview – and playfully references Aravena’s exhibition project. Photo© Julia Kaulen

It seems like your “Basic Building and Settlers” project, realized in 2013 for the IBA Hamburg, has since really grown.

Jörg Leeser: True. Alejandro Aravena invited us to present the project here and perhaps this or that one of our other house building projects. So we said: Thanks. Great. But we’d like to advance our ideas on self-building somewhat for a biennale. And we’re now presenting these five studied areas throughout Germany and juxtaposing house-building programs in Germany post-1946, which we call “Königsberger Strasse” and our (still fictitious) house-building program for the next ten years, which we’ve called the “Aleppo Path”.

Jörg Leeser: Well, the comparison is perhaps a little polemical, but not that much. Back then, about 12 million people emigrated to Germany, above all from territories to the east of it. In the course of ten years, around four million dwellings were built, more than half of them as public subsidized housing. And now, in 2015, about one million refugees fled to Germany and everyone is screaming OhDearOhDearOhDear. For our model we did the math quite liberally and then asked: Would it be such a disaster if over the next ten years we had an influx of 12 million people? And we found out that it actually wouldn’t be that terrible. If Germany were to undertake to build four million dwellings over the next decade, and about half of them were public subsidized housing, then this would be great, with or without refugees. We feel it important to go on the record saying that Germany is above all in a housing crisis and urgently needs affordable dwellings in downtown locations.

You’ve created a model of four places for new housing estates to show how to successfully handle such a new-build agenda here: Hamburg, Duisburg, Leipzig and Munich. What were the reasons for the choice?

Jörg Leeser: We looked for places that would represent many of their kind: real-estate prices had to be 200 euros per square meter or less, the town center had to be max. 30 minutes away. Our new-build settlements were not to be satellite towns. From the various possible locations we then chose four that are spread across Germany: Hamburg, Duisburg, Leipzig and Munich. Duisburg was pure chance, as we’d actually been looking at Düsseldorf, but it was so expensive that we were happy to find something in Duisburg – from where you can still reach central Düsseldorf inside 30 minutes. 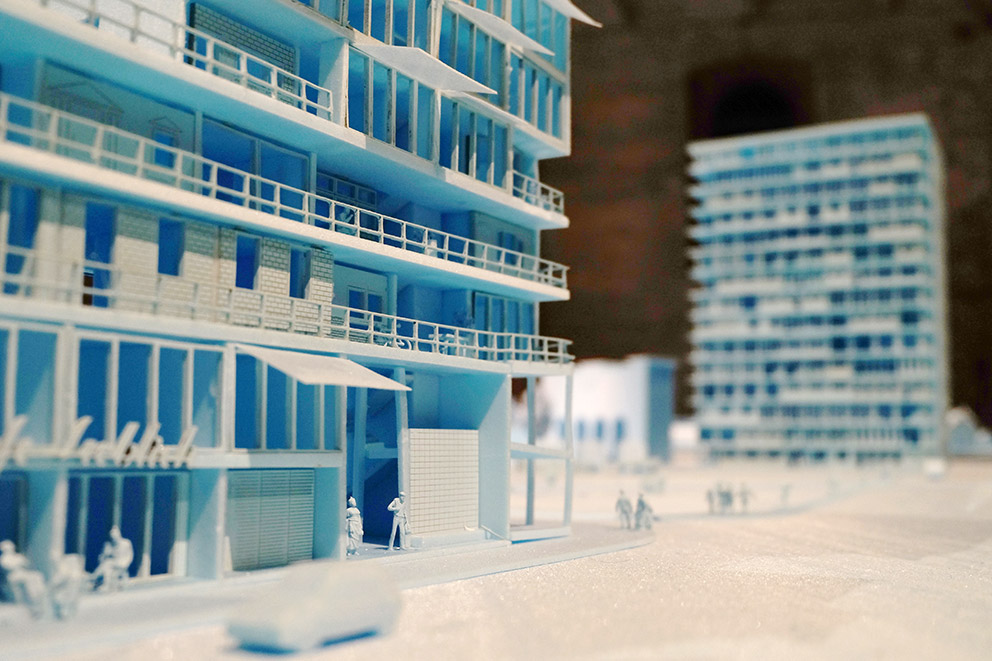 The models demonstrate new types of mixed-usage, high-density and cost-effective down-town housing estates, some of which can be part-built by their owners-to-be.
Photo © Julia Kaulen

The word NEUBAU in fluorescent white letters hangs above the model. Why?

Jörg Leeser: Because it’s a great word, and not just for the architects among us. In the 1950s, new builds were the most beautiful and cherished thing imaginable; everyone wanted to live in the large, bright, modern apartments with a shower, a balcony and an elevator. It was also a self-confident statement: We’re building this new! The beauty of that cream-colored new world with young trees in green fields is presented here taking the example of Sennestadt in Bielefeld – our fifth model. Since then, things have come full circle and everyone wants to live in late 19th-century buildings, such that even new apartments now have to look old. And new-build housing estates are always suspected of being tedious, boring and monofunctional – and poorly built at that.

So what are your proposals exactly and what makes your new new-build estates stand out?

Jörg Leeser: All of this is about cost-effective inner-city house building in densely built-up, mixed-use estates. We borrowed the idea from our Hamburg IBA project that there can be a building shell which provides a multi-story load-bearing structure including the infrastructure and utilities which the users then themselves finish building. We call this the “City of Assembly” in the dual sense of a city that has been assembled and of people assembling and then assembling things.

The Biennale gave us an opportunity to think about urban planning in this sense. We call it “coproductive” or “elastic” urban planning: The planners themselves create the framework, but laypeople can then perform certain parts of the design work themselves. It’s very much the opposite of the divine planner of the post-War era who even goes about statistically evaluating how inhabitants spend their free time and then plans that, too, down to the smallest detail. Our “elastic” planning also means we mix up these self-builds with expensive lofts and commercial properties in which there are stores on the ground floor – and plots that initially remain vacant and can be included in later developments. In the interim, these deliberate empty spaces can be used as adventure playgrounds or as a pony park, or whatever. 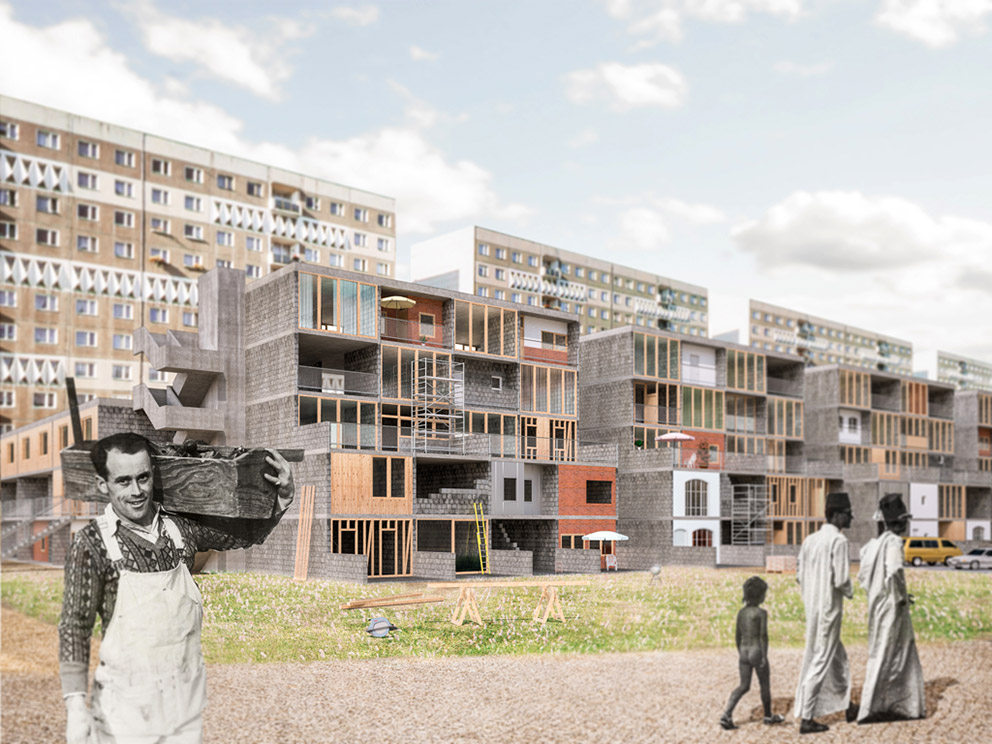 BeL demonstrated the ways in which you can build your own apartment on the basis of an existing housing shell with its multi-family dwelling presented as “Basic Building and Settlers” at the IBA Hamburg in 2013. Collage © BeL Architekten

How realistic do you think your proposals are?

Jörg Leeser: The field in Hamburg’s Wilhelmsburg district is actually a feasibility study commissioned by a project developer and arose as a result of the work for the IBA. We were asked to demonstrate whether and how affordable housing could be possible at that location.

And the other examples?

Jörg Leeser: Duisburg and Leipzig are fictitious projects that we chose because we consider the sites typical of the major German house-building program. Hamburg and Munich are very interesting and I could well imagine that the political pressure will increase in coming months – and with it the interest in new, alternative models. There are proposals that refugees whose applications for political asylum have been approved should all be moved to regions where there are low population densities, best being the villages in Mecklenburg Western Pomerania that are slowly disappearing. This may be a neat idea in terms of spatial planning, but it seems totally unrealistic. It simply pretends there is no such thing as the right of free choice of place of residence and instead introduces a command economy. The government should focus instead on public subsidized housing which the market, if left on its own as we all now know, does not build. Many migrants will move into the cities and will compete there with migrants inside Germany who after graduating from high school leave home in Mecklenburg Western Pomerania and head, for example, for Hamburg. We need to have cost-effective answers to this. 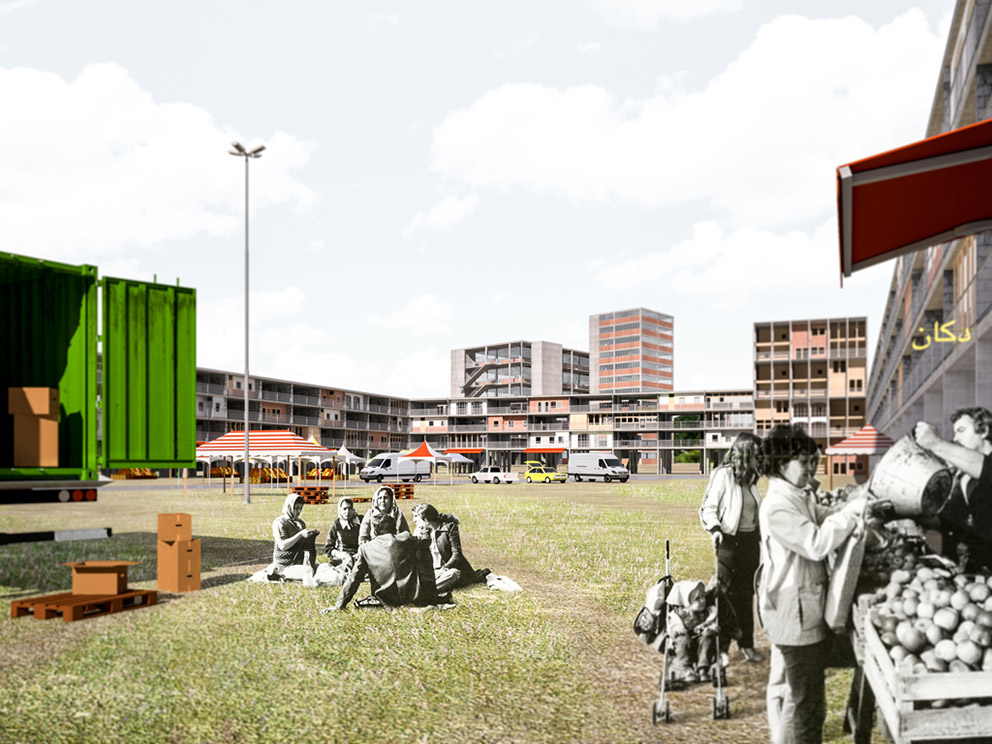 They’ve transposed the idea onto the scale of urban planning for the Biennale – in this case a collage for the chosen site in Duisburg. Collage © BeL Architekten

So the focus is above all on setting political signals?

Jörg Leeser: We need real momentum if the necessary political reforms are to be undertaken. But I am hearing an ever larger number of people such as Jörn Walter in Hamburg, Elisabeth Merk in Munich or North Rhine Westphalia’s Building Minister Michael Groschek – he recently held a very ambitious speech saying that we need more courage to experiment and need to go down new paths. There seem to be ever more people saying that all we need do is dare to experiment. Germany always has bags of money, but it also has angst, too. And this is where a glance at the post-War era may help, when Konrad Adenauer pushed through the most progressive of changes to the house building laws, at the same time priming the economic pump and overcoming the housing crisis. 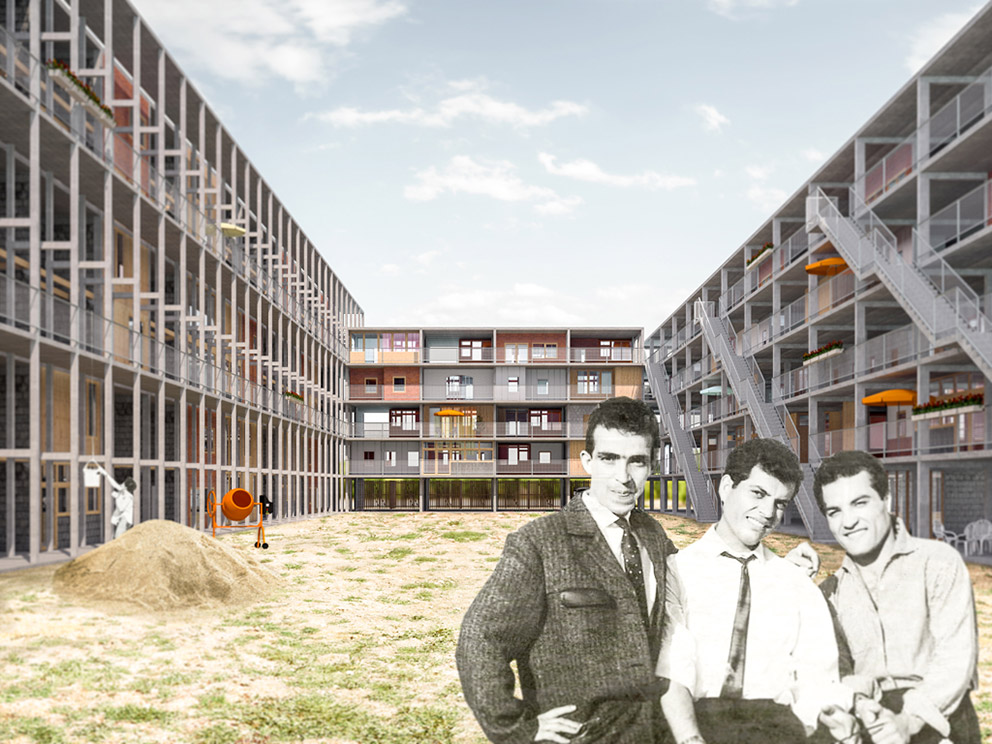 The proposal for Hamburg was a study commissioned by the City of Hamburg; the architects selected the other sites as they offered prime examples of how the ideas could also be realized in other cities. Collage © BeL Architekten

One more word on the model: How did you build it?

With 30 people, over the course of five weeks – in our offices in Cologne. And then in 130 crates on Euro pallets by truck to Venice, where we needed a week to assemble everything.

And the aluminum ladders that give us a view down on the large model – did you simply take Aravena’s Biennale poster literally?

Bang on. When the model grew and grew we realized that it was no longer possible to really grasp the urban planning dimension of the proposals. So Aravena’s poster was really handy and we swiftly bought an aluminum ladder in a DIY outlet, threw it in-between the crates on the truck, and transported it to Venice. It certainly didn’t cost much. 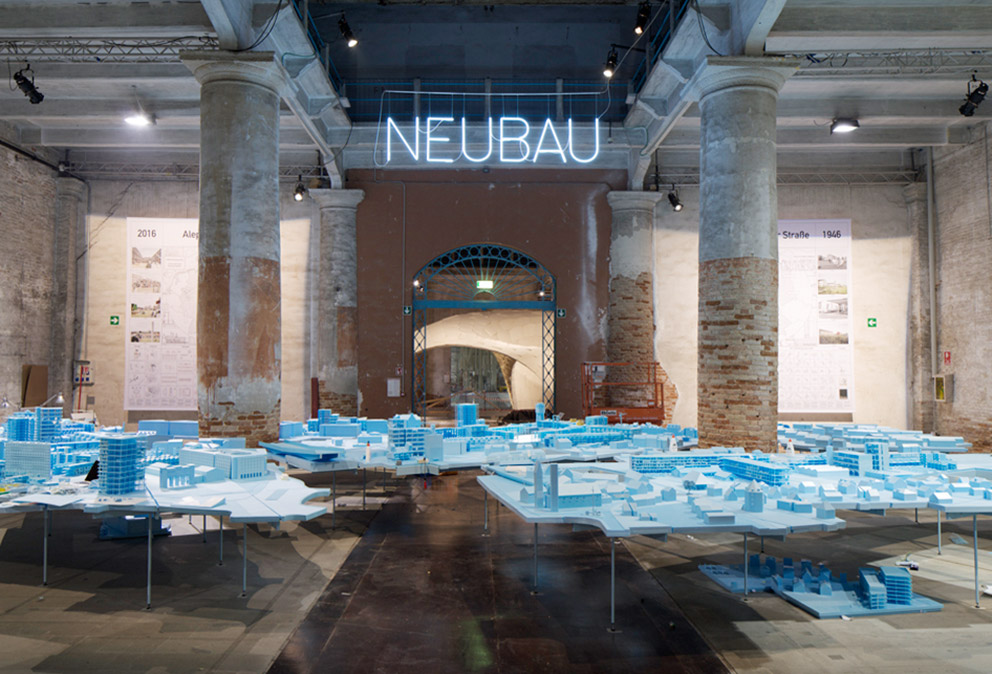 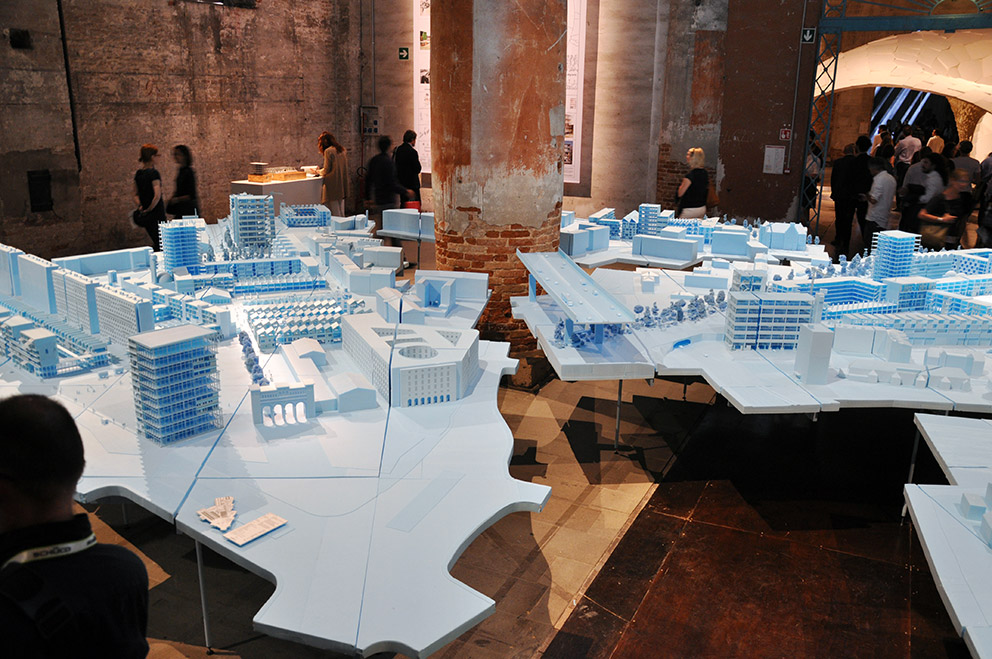 View from the aluminum ladder and thus “Reporting from the Front”. Photo © Robert Volhard, Stylepark 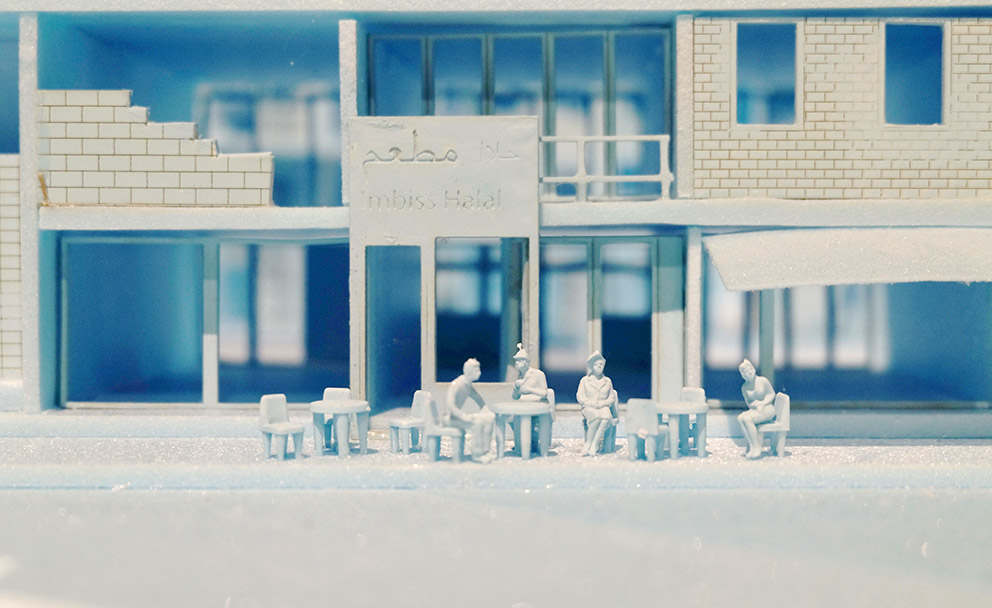 House-building ideas made of Styrodur: These estates would explicitly address all new arrivals in German cities, from the middle classes to asylum seekers. Photo © Julia Kaulen 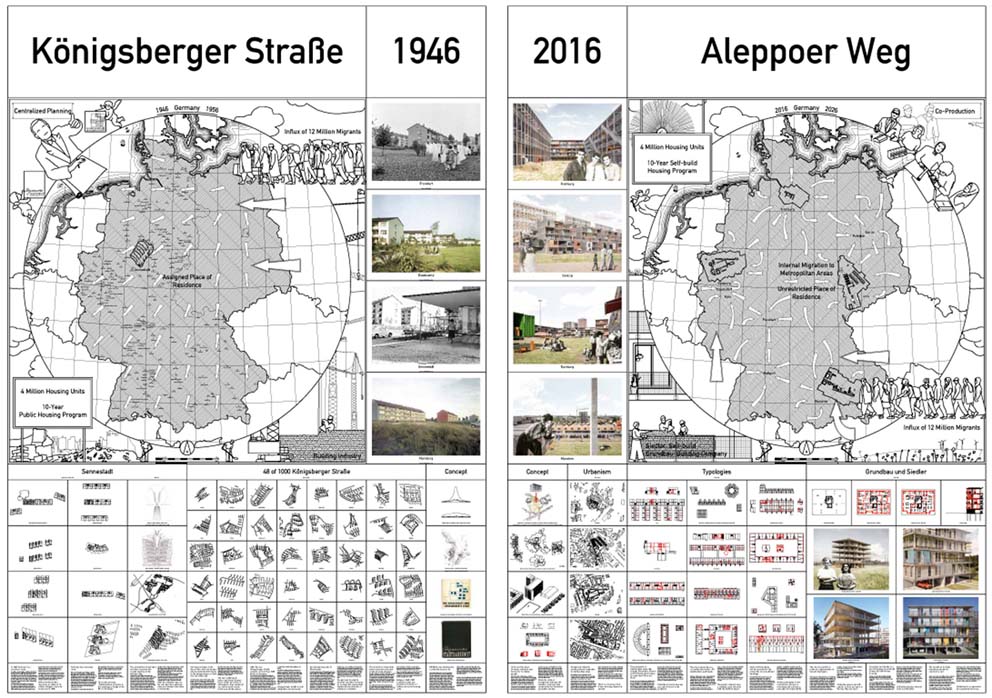 BeL’s approach straddles many years and compares the challenges of 2016 with the Konrad Adenauer’s post-War house building agenda for post-War Germany, when he enacted some of the most progressive house-building legislation. Collages © BeL Architekten
It took a while to assemble all the models. Film © Veit Landwehr and Tom May
Advertisement