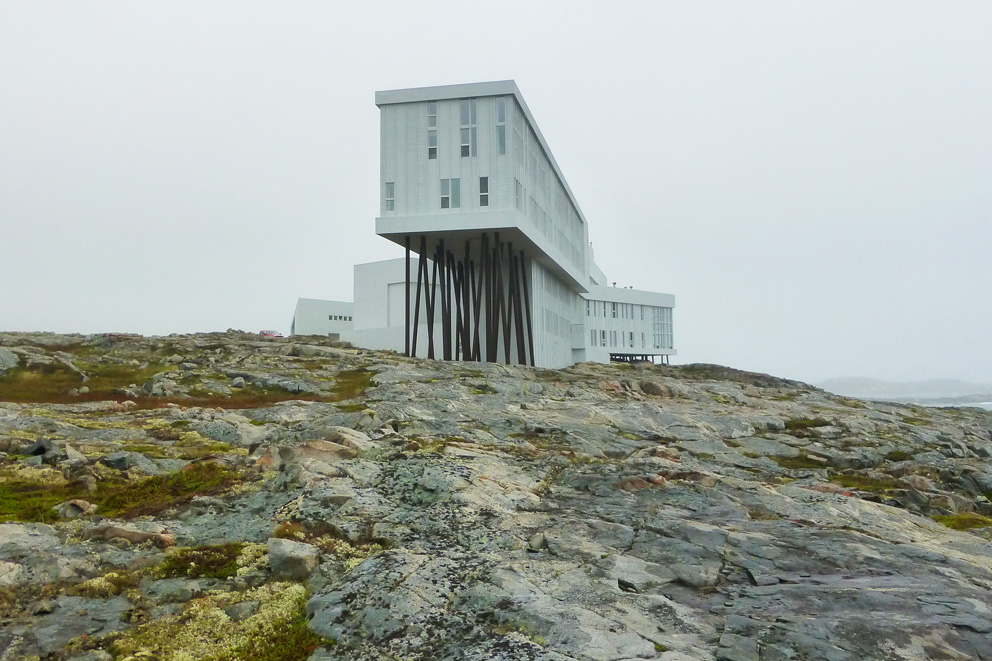 On a rocky outcrop, where there’s nothing between you and the Artic: the “Fogo Island Inn”. All photos © Jeremy Gaines

Some 450 kilometers northeast of St. John’s, the capital of Newfoundland, Canada, in a bay of islands that include one called New World, lies Fogo Island. Once upon a time, life here was driven by cod fishing, but overfishing back in the last century has as good as put paid to the profession. Today Fogo is home to 2,500 inhabitants and can be reached by a 45-minute ferry journey from a boat terminal aptly named “Farewell”. The main attractions round here tend to be icebergs or whales. If you couldn’t afford the helicopter and have driven all day up the Trans Canada Highway, you may be interested less in spotting the one or the other, and more in the fact that on this rose-and-gray granite edge of Canada, amidst a myriad of lichens and ponds, you can at long last get a really decent espresso, in a superb hotel to boot.

At the beginning of the year, once the pack-ice had thawed, many of the icebergs might have been fighting for the channel with container ships, bearing such unusual contents as fine Italian cottons, thick Turkish towels, Dornbracht bathroom fittings, Duravit shower toilets, and ThyssenKrupp elevators – all of them bound for Fogo. And all thanks to the efforts of social entrepreneur Zita Cobb. A local, Zita left the island to get an education, and made her fortune in the fiber optics business, where by the year 2000 she was the third highest-paid female executive in the United States. But like so many islanders before her, she was drawn back to her roots. With the help from two of her brothers, she established the “Shorefast Foundation” to support her island, out of a wish to improve the lot of her fellow islanders. At a town hall meeting she proposed providing scholarships for island kids. Only for a woman to stand up and say: “It’s all really fine what you’re doing. But you do realize that you’re just paying our children to leave, don’t you? You look smart enough. Can’t you do something to make jobs?”

Stunned by the veracity of what the woman said, Zita Cobb put her mind to proving that, yes, she and those around her were smart enough. She decided the key to getting people out of a semi-subsistence existence fishing cod was tourism. And tourism, she surmised, could be driven by the arts and by culture. To this end she recruited Nicholas Schaffhausen to help her develop an artist-in-residence program for the isle, and star Newfoundland-born architect Todd Saunders to create strikingly geometric studio housing for them.

Tourism, she also discerned, could be driven by good design, as the better class of tourist wanted more than a B&B, where the bed left something to be desired and breakfast was a disaster waiting to happen. So while the “Shorefast Foundation” was busy establishing a sustainable fishing system post-cod leach, she set about creating somewhere for tourists who wished to enjoy modern art to stay, somewhere that would be as attractive as the marvelous natural scenery: “Fogo Island Inn”.

For the project, she again turned to Canada’s Todd Saunders to come up with a cutting-edge building. And he certainly delivered. Saunders has done much award-winning work, and like Cobb has traveled in the course of his professional life: He has lived and worked in Bergen, Norway, since 1996 – having studied at the “Nova Scotia College of Art and Design” in Halifax and “McGill University” in Montreal. Most of the buildings he has designed are to be found in Scandinavia, and, mostly private residences, they tend to focus strongly on sustainability in the sense that they combine local materials and traditions with modern building. Rather than a ‘glass and concrete’ man, he is a ‘glass and wood’ man, and insists on using glass to create a visually permeable interface between the building and the natural environment, trying to overcome the inside/outside paradigm. These concepts he also brought to bear for the Fogo hotel project.

In a landscape where three stories is boastful and tends to be reserved for church spires, the four stories he suggested annoyed some of the older locals. Yet Saunders judiciously chose a structure consisting of cubes, emulating the fissured local granite with its hard edges. He clad the concrete core in light gray clinker wood, simulating the walls of the traditional Salt Box houses typical of the region – and the sides of the fishing boats. Part of the building reaching out seaward is supported by eye-catching pilotis but these are not a nod to Le Corbusier; instead, they take up the Newfoundland tradition of stilts supporting the fishermen’s shore-side sheds, where the tackle and nets are stored. And the color was equally well chosen, as it blends with the sea-mist to render the building as good as invisible at times.

“Fogo Island Inn” soft-opened in May when all the local families were able to overnight once free of charge. It has 29 rooms and a gross floor area of 4,000 square meters. It boasts roof-top hot tubs for star-gazing, a spacious restaurant, a long bar, an exhibition space, a cinema (you can borrow the local art movies) and a library (full of Lars Müller’s best alongside a collection of maritime and fishing history publications). Like the exterior, the interior is mainly painted in the grayish white of sea spume, and is almost entirely wood. The frontage overlooking the sea is mainly glass, with all the windows made locally, whereas the building’s “back” largely eschews windows in favor of boards that withstand the heavy wind. Imagine standing at the floor-to-ceiling windows in your room, perched up on the rocks, and know that all that separates you from the Arctic north is a pane of glass and a mass of cold Atlantic.

The furniture and interiors were commissioned in a separate process begun by Elisabet Gunnarsdottir, the first director of "Fogo Island Arts". The latter comes from Iceland, which is much like Fogo Island, bar the trees, and organized the initial workshop for the artists in 2010. A total of 13 different designers worked on the interior, handling the lighting, the chairs, the small iron stoves that provide heat, the knitted carpets and, quilts and cushions, the wallpapers - three alone worked on this, whereby each of the three wallpapers consciously references local customs or practices. The medium preferred by most designers was local: wood. There are now lathed pine banisters, floors treated with shipping lacquer, CNC-milled pine laminate side tables, and hand-built rocking chairs. The rooms have an accessory beam running along one side, otherwise customary in Citterio office systems – the mirror, clothes hooks and shelves can be relocated at will. And where it was not wood, the material was likewise local: The lighting in the dining room is festooned with old fishing boat ropes, knotted more simply perhaps, but emphasizing the sheer height of the room. Indeed, the only thing that might mar the overall design experience is perhaps the Sambonet dining knives that lie so nice and heavy in the hand, only to then fall off the plate and to the floor, because some cutlery designers haven’t yet worked out how to defy the laws of gravity. What is striking is that here, for all the minimalism, diversity results in a lively feeling, as opposed to the antiseptic atmosphere of many a ‘designer hotel’. Perhaps Cobb, Gunnarsdottir and Saunders have inadvertently shown us that what we need are ‘well-designed’ rather than ‘designer’ hotels.

The project brought international designers and local craftspeople together, people who like Rex had partially forgotten that they were craftsmen. Rex helped custom-make all the windows of the sea frontage (some of which had to be triangular to accommodate the wedge shape of the building). He was encouraged by the Foundation to revive a tradition practiced by his grandfather in the winter months, when fishing was not the order of the day – wooden window building. And now, having regained the skills, supplies windows to other Newfoundland companies busy restoring or upgrading properties to cater to the wave of vacation rentals the project has set in motion. In total, Rex is one of 25 people just from the neighboring community who now work at “Fogo Island Inn”.

In the monograph of Todd Saunders’ oeuvre brought out by Birkhäuser Verlag in 2012, the entry on “Fogo Island Inn” says that “construction completes in late 2013”. The fact that the building was up and running much earlier attests to the islanders’ willingness to create this jewel for themselves. It was in their best interests as all the profits the inn makes are ploughed back into the island, a profit-making but not-for-private-profit institution. An old fisherman on New World Island commented that the prices at the Fogo Island Inn are outrageous. They are, outrageously cheap – because on the one hand they include the price of full board and all your coffee, and you are contributing directly to the island’s future, while on the other you you are still paying less than you would in most halfway acceptable lodgings in Manhattan.

Indeed, this is another aspect of Cobb’s entrepreneurial vision. Finding a good meal, let alone that elusive espresso is going to be difficult on Fogo until the tourist industry becomes firmly established, so you cannot just book a room at the “Fogo Island Inn”. You have to book full board – something few will rue. The restaurant recently won a national award, and the kitchen takes up the thread spun by the designers: Chef Murray McDonald comments: “Our menu is focused on wild things from the North Atlantic, foraged plants and berries and local seasonal produce. I’ve been working with traditional ingredients that locals have always used and taking them in a new direction to create the new Newfoundland cuisine.”

Nevertheless, at some point guests will have to leave, and when the time comes, and they drive onto the ferry, they’ll have to say goodbye to Fogo Island and say hello to “Farewell”. 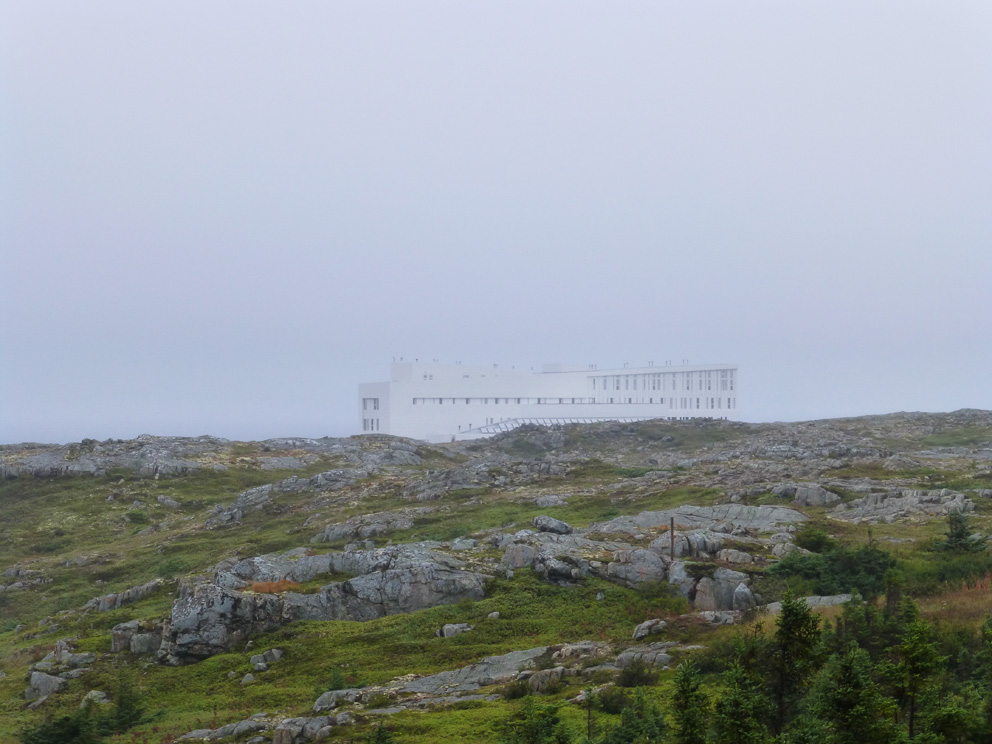 Lost in the fog, almost surreal: the hotel designed by Todd Saunders.

The solitaire should revitalize the local economy. 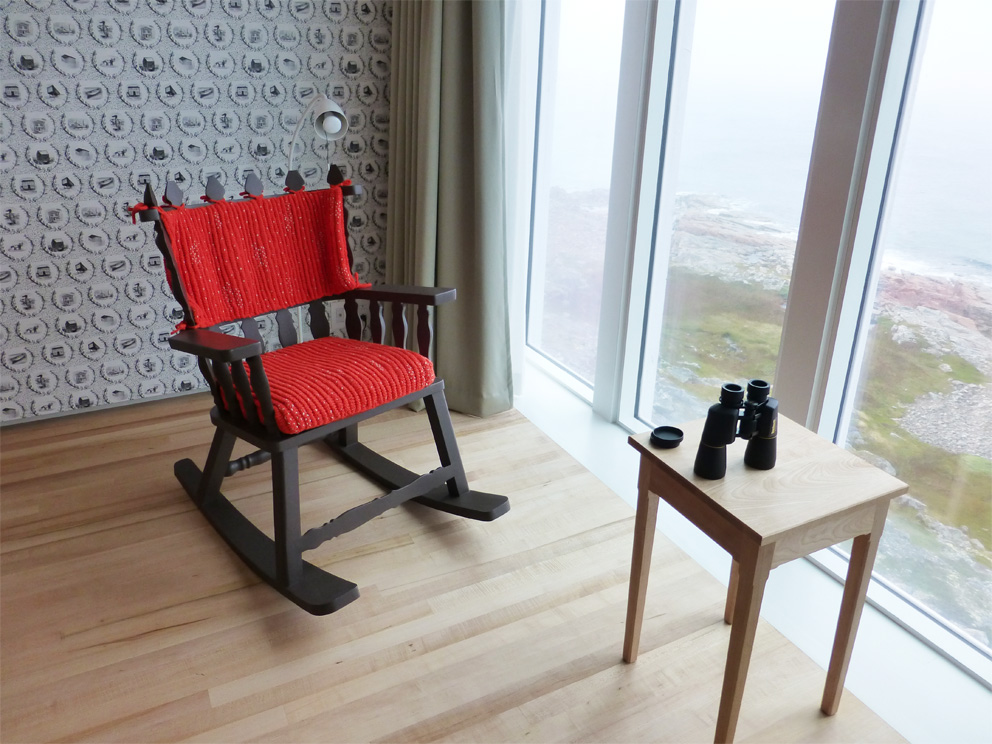 Purpose-designed rocking chair – the ideal seat for a cup of tea looking out toward the arctic.

Each room has its own private iron heating system – the hotel provides the fire wood and the fire setter.

Ropes emulating nets function as light shades in the restaurant, emphasizing and filling its high ceiling. 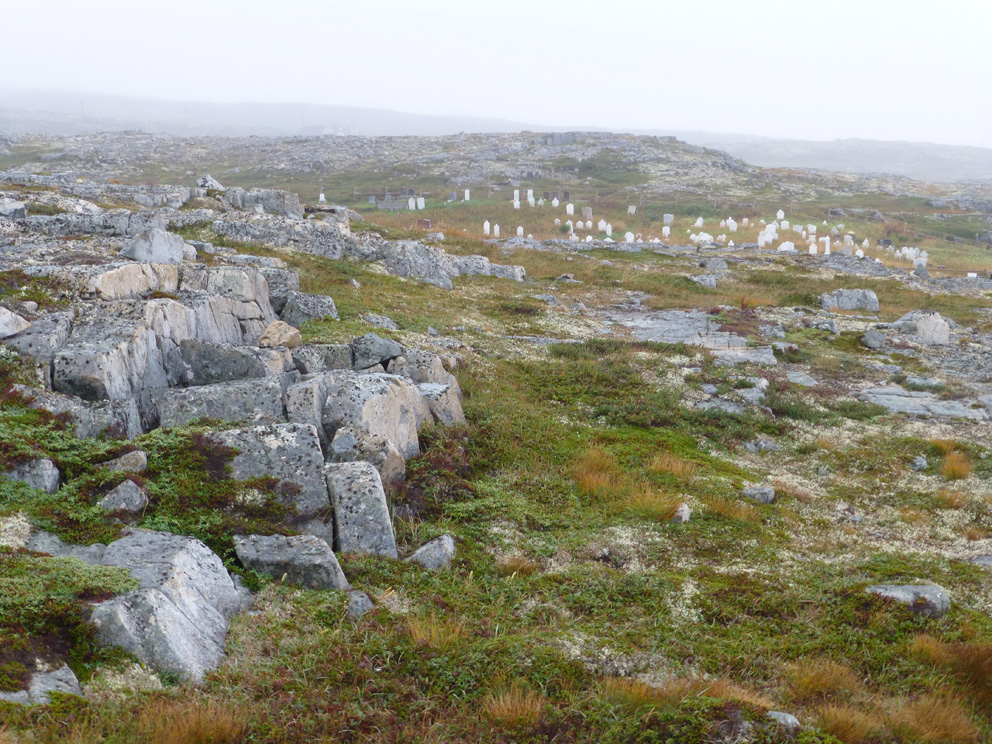 The Joe Batt’s Arm cemetery, not far from the hotel, like the latter it melds with its surroundings. 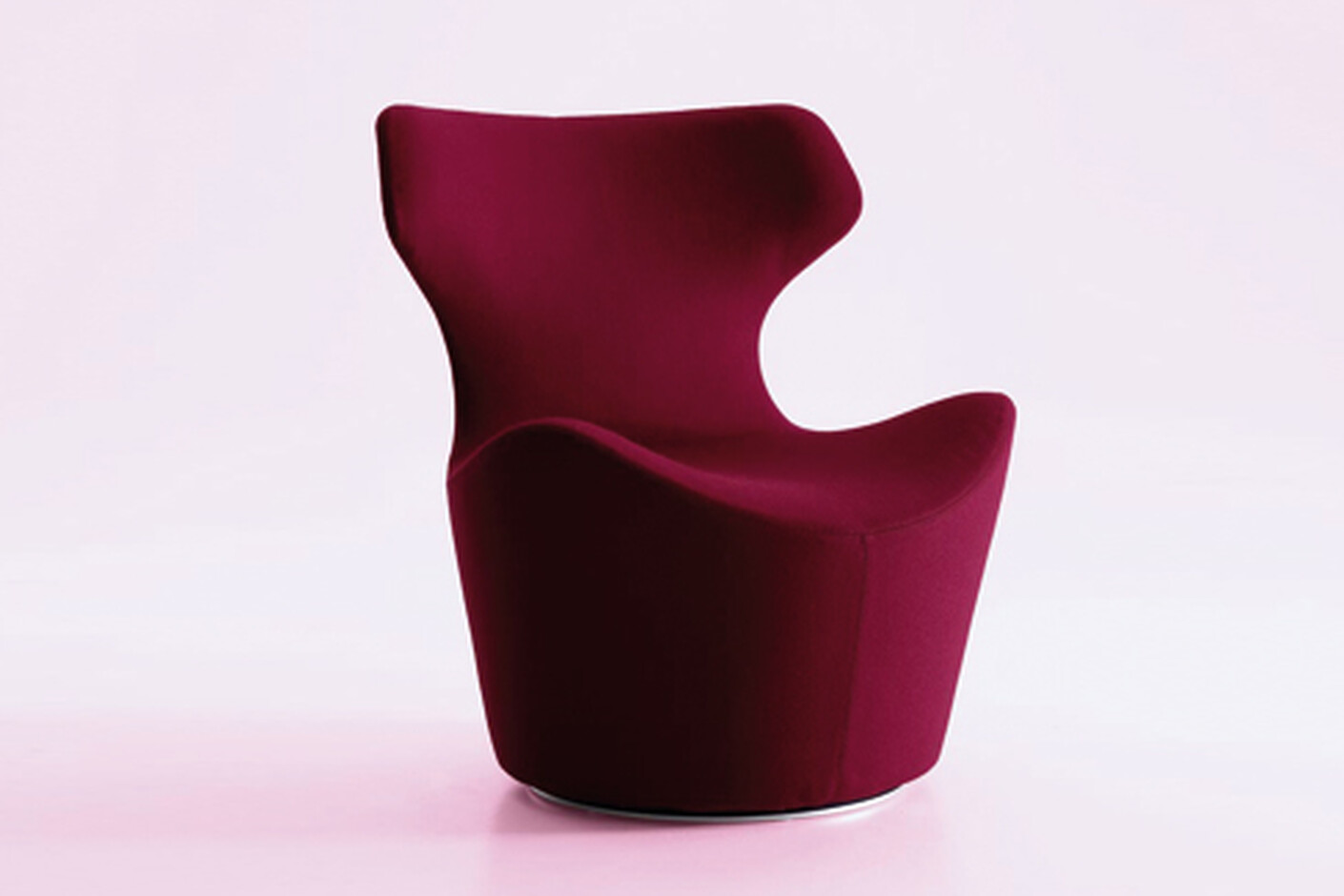