“Prototype. Please do not touch”. You read these or similar sentiments on this or that product making its premier. Other objects are carefully placed outside the viewer’s reach, either on podiums or beneath acrylic glass covers. The models are intended to give a first visual impression, but most of them would not withstand a function test. Choosing the right moment to present a product is a science in itself. And opinions differ as to whether you should present a product as a prototype, or rather wait until the first serial models are available. Talking to employees of furniture makers on the topic, you encounter different assessments, sometimes presented objectively, other times with a touch of regret, and then again with enthusiasm. The happy medium would seem to be to present a product at the point when development work is almost complete and the production start is foreseeable – in the hope that the devil is not in the details. At this year’s Salone del Mobile in Milan the most common response heard was that the new products should be available in the coming summer or fall, in other words three to six months after Milan. However, no matter how much conviction was expressed in this view, typically a host of problems remains to be solved before a product can actually be delivered.

How do you kindle interest?

In the furniture industry the pressure of having to regularly present several new products is by no means as great as it is in the fashion world, but it is omnipresent nonetheless. When to present a product for the first time – is determined by the answers to a series of questions: What attitude does the company want to convey? How do you arouse serious interest, and how do you manage to be present in the media? Which products are important commercially? Should product acceptance be tested on the market before larger investments are made? Can marketing, press and distribution come up with the requisite tools in good time? How high is the pressure within the firm to bring out something new? The risks involved in a premature product presentation are obvious: If it is an average design then interest will tail off before any turnover could be generated; if it is a good product, it will be copied more quickly.

By way of example, the idea for “Biknit” came just one month before this year’s Salone. Nonetheless, Patricia Urquiola and Moroso not only opted to show the lounger at the upcoming fair, but also to assign it an especially prominent position right at the entrance to the stand. Karmelina Martina, the product developer responsible, speaks out in favor, and with a convincing smile, of presenting products during the development phase. She supports the idea of a “transparent” company. Everyone should be able to see what is going on inside the company. She hopes “Biknit” will be available to customers in around a year. Normally, the development of such products takes between several months and two years. The main reason, she argues, why a prototype occasionally does not make it on the market is the price. Alongside “Biknit”, Moroso showed many more prototypes in the front of their stand, such as the “Moon Chair” by Tokujin Yoshioka and the “Impossible Wood Chair” by Doshi Levien; the rear of the stand and the VIP area were made over to products of recent years that are now available.

A totally different picture emerged at Nils Holger Moormann’s stand. Visitors encountered dark brown platforms sporting products that were entirely covered in light cloths held together by red ribbons. The labels bore fictitious designer names, poetic-sounding product names and years that lie in the future, for example “Bankgeheimnis” / Banking secrecy by Dr. Urs Monet from 2013. Moormann chose this presentation to consciously counteract the “new! new! new!” within the furniture industry and the gossip factory about who is bringing out which new products. In addition to this statement, which is more reminiscent of an art installation than a trade fair presentation, new products were also on show. At the center of the stand stood the “Pressed Chair” by Harry Thaler, which received an award at the imm cologne. Although Moormann prefers to show products that can already be ordered, in this case – owing to the manufacturing method – we have a prototype, which is to be available from September 2011 onwards as a series-produced item. Until then retailers can make a binding demonstration of their interest by acquiring specially designed “obligation certificates”.

A list with the prototypes of this year’s furniture fair would probably take up several pages. What follows is intended to be a small, representative selection: The “Knot Chair” by Tatsuo Kuroda for Normann Copenhagen only exists to date as a hand-made version made by the designer; the serial version is to hit the market next year, and slight modifications may be made. “The Invisibles” by Tokujin Yoshioka for Kartell, a series of chairs, benches and tables made from a transparent silicone polymer, were first presented at the Salone 2010. This year brought a series featuring thinner walls, and the collection is expected to be on sale in stores from 2012. Most of the new products at Magis are intended to find their way to the customer in the coming summer. As for the “Troy Family” by Marcel Wanders – a group of tables and chairs – the process of achieving readiness for production might continue into the coming year. Since the last imm Cologne the rocking horse “Rocker” by Doshi Levien for Richard Lampert was given slightly altered rockers and it is yet to be decided where the designer’s name will be positioned. Similarly, to date the rocking chair “Tip Ton” by Barber Osgerby for Vitra only exists in small series for fair presentations and the liker. It is scheduled to go into production in the fall.

Honing the product for production

This year’s Salone is over again. The prototypes are back in the development departments and workshops. Now it is up to the manufacturers to evaluate the insights they gained during the fair and render the prototypes ready for production. Some products will be launched as planned, other projects will have to be subjected to functional, formal or technical modifications: Maybe more work will be done on the color range, the surfaces, the name, the product images or the story. Meanwhile some designs have proven to be rubbish, and will never be seen again. One glance inside the catalogs and price lists for 2012 will have the current announcements and speculations transformed into certainty. 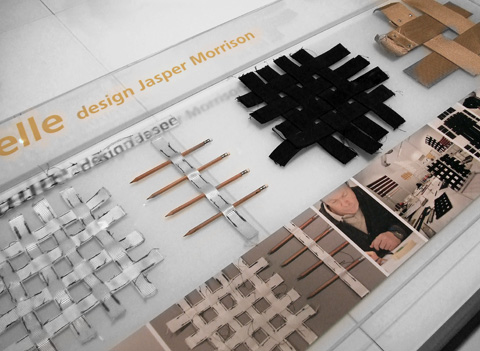 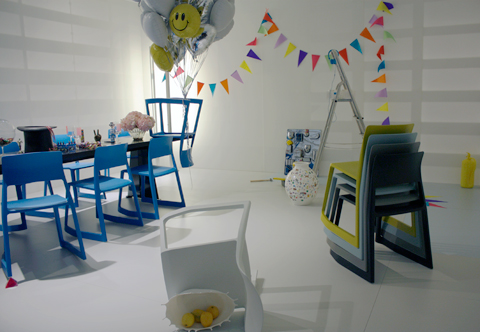 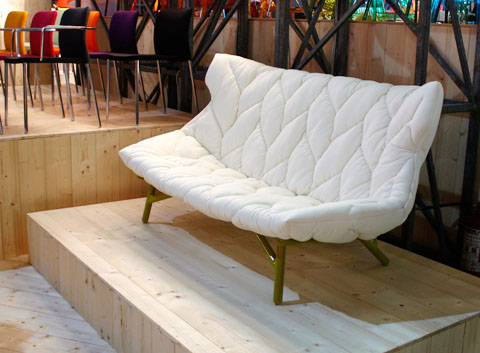 Foliage by Patricia Urquiola for Kartell 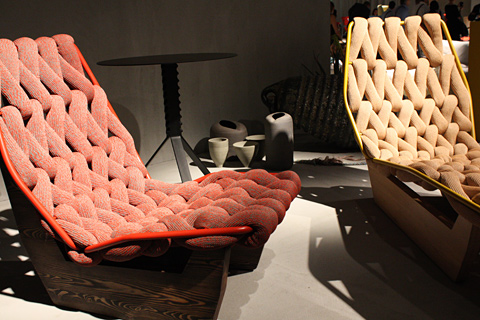 Biknit by Patricia Urquiola for Moroso 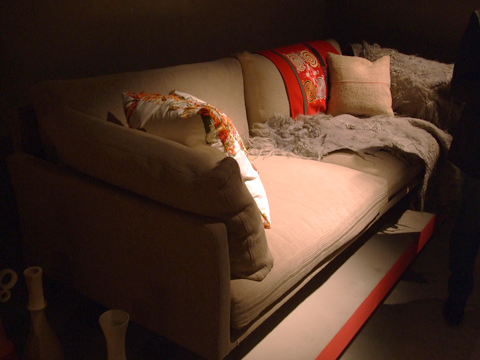 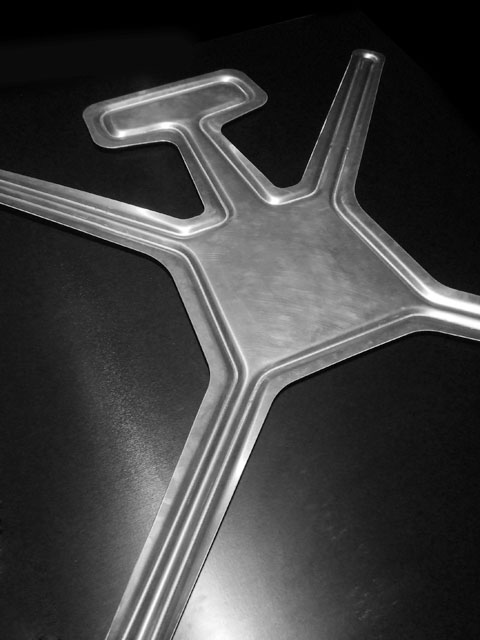 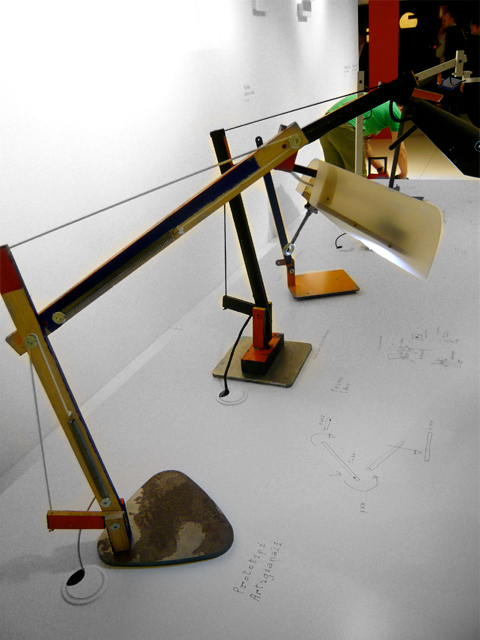 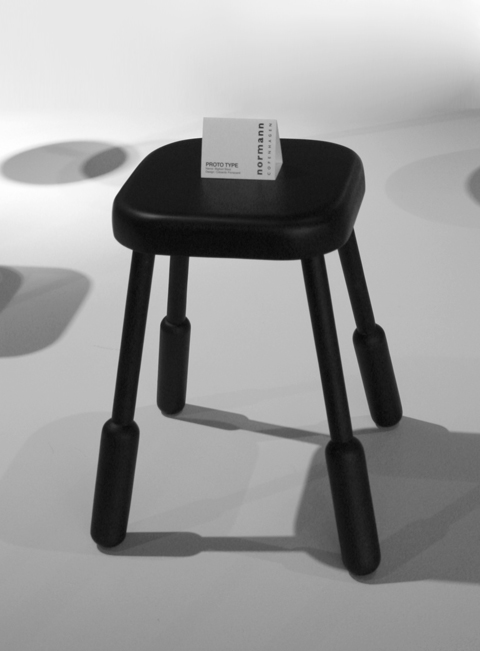 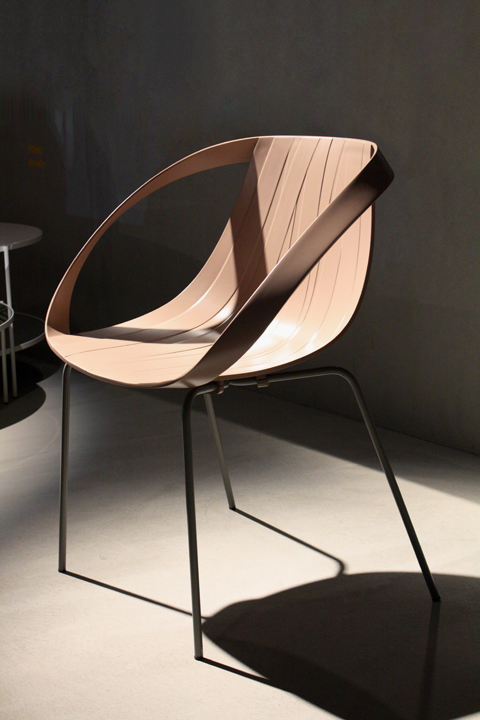 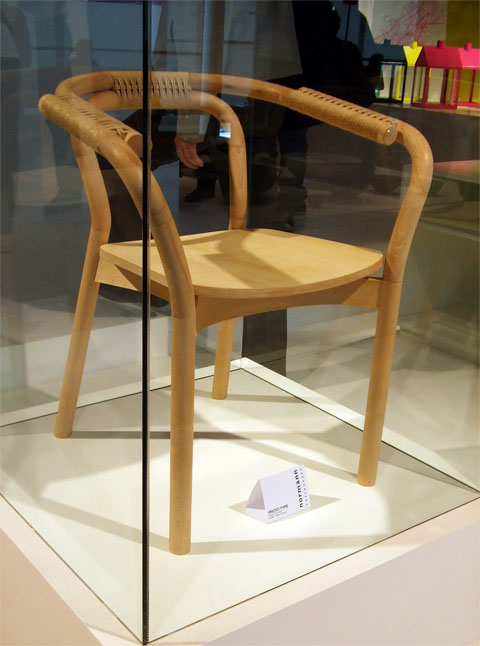 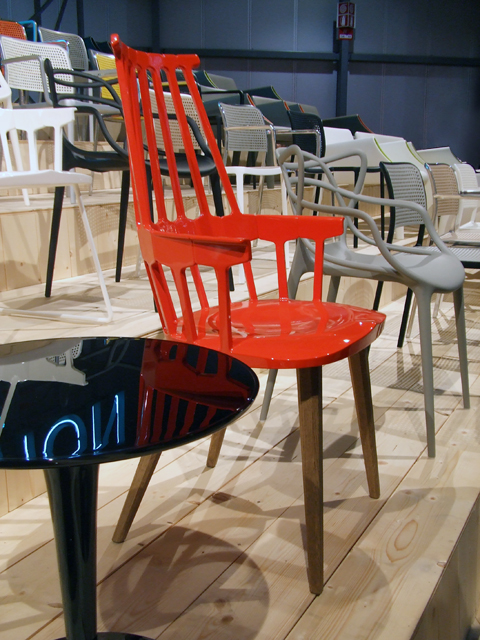 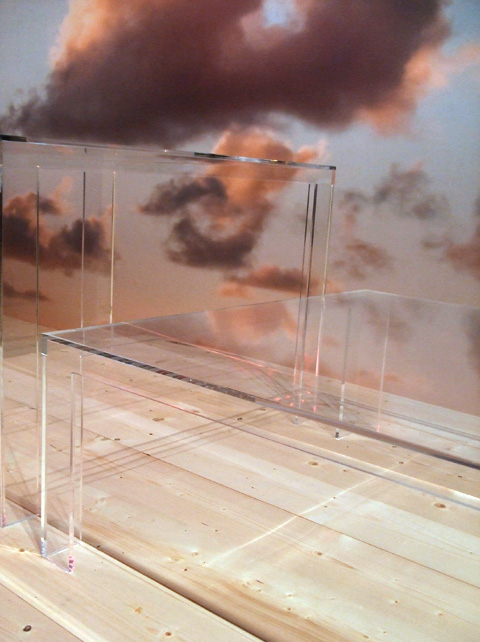 The Invisibles Collection by Tokujin Yoshioka for Kartell 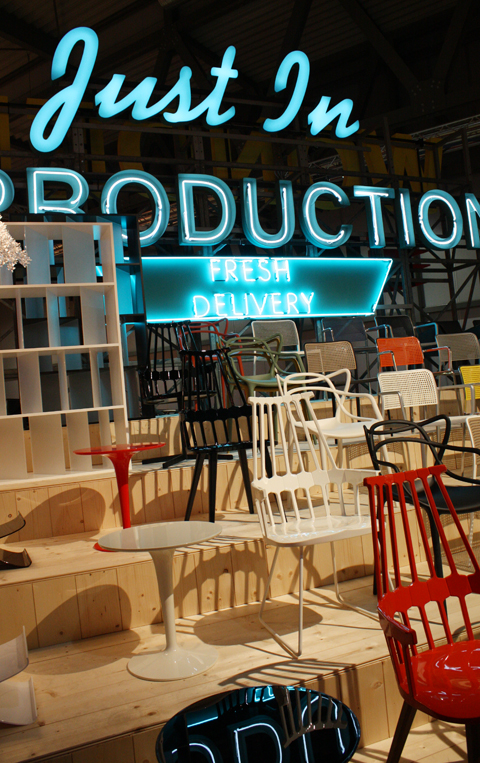 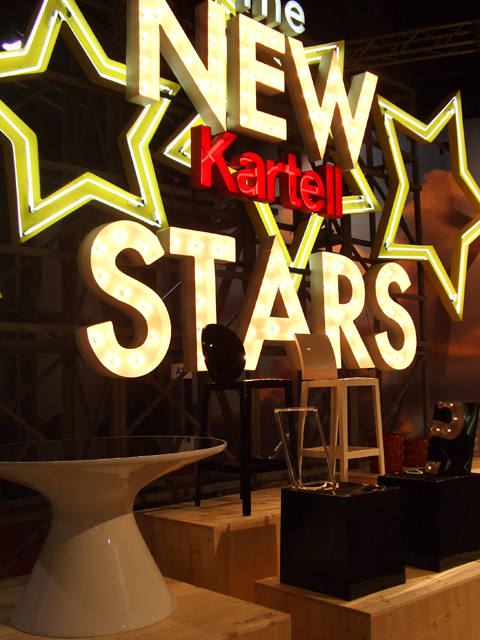 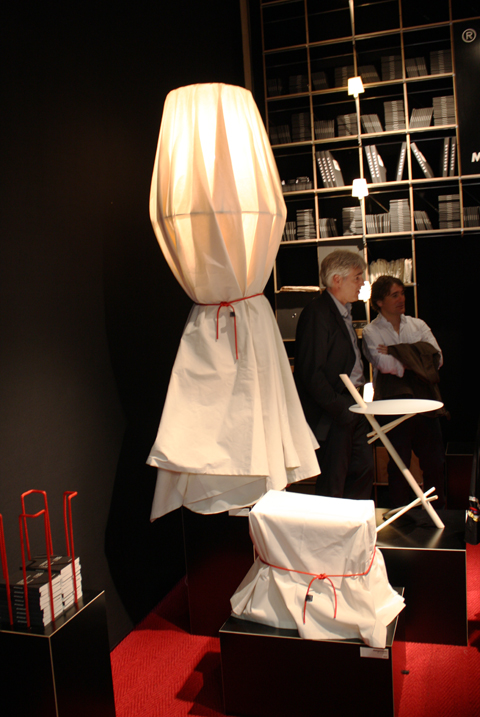 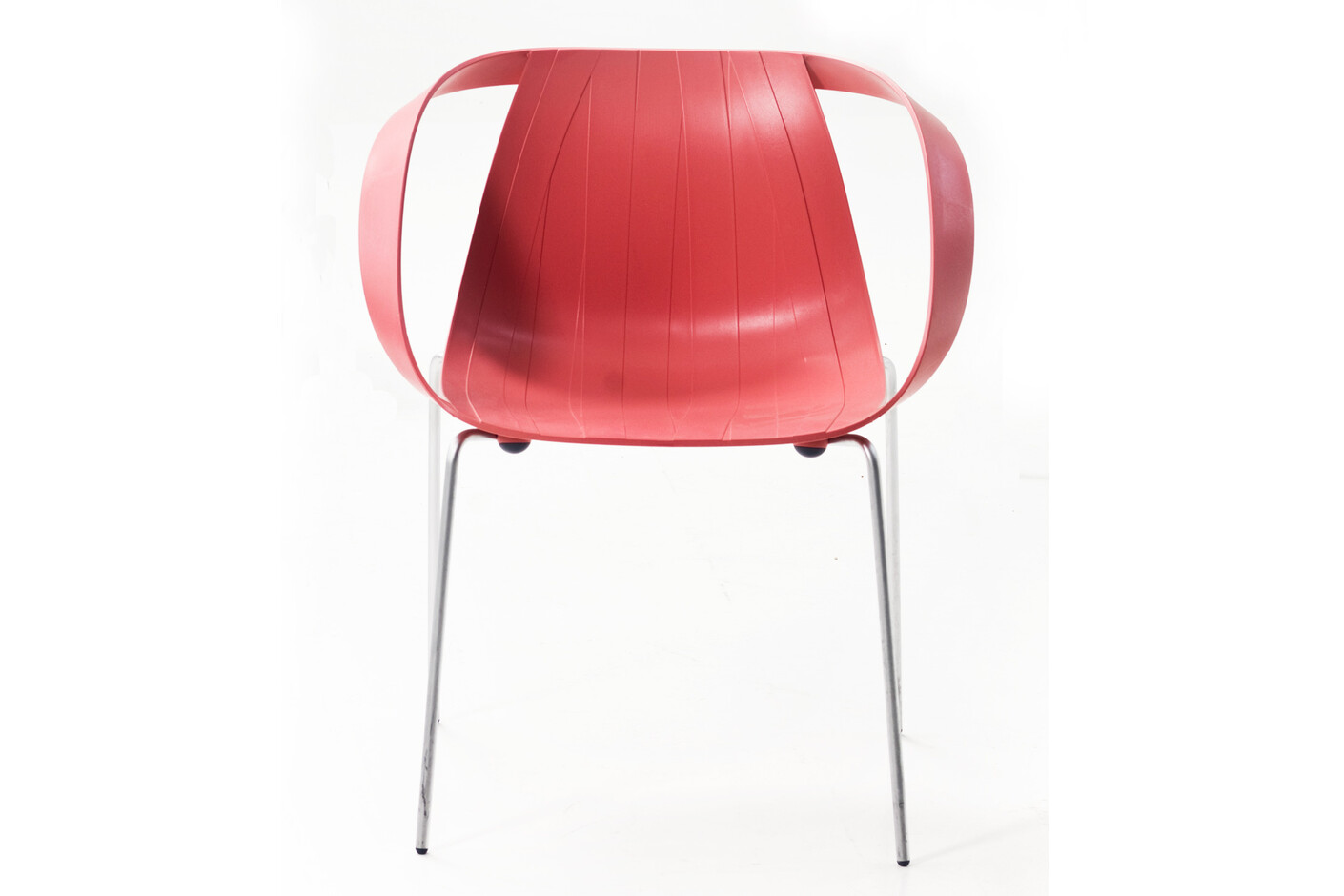