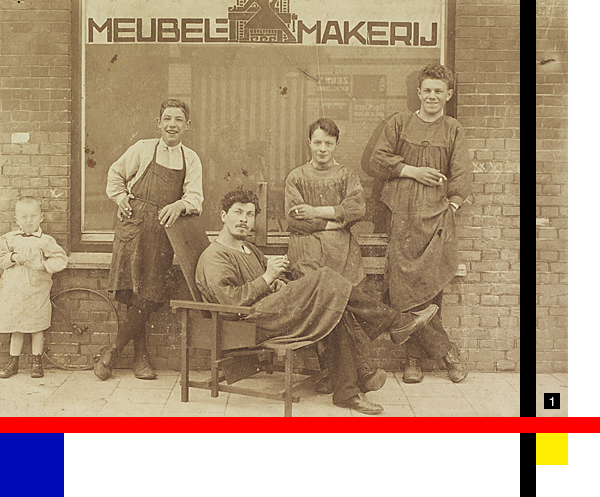 There’s more than one version of Modernism and more than just one kind of breaking with the past. When, back in 1918, the De Stijl Group was formed, World War I had just swept away the order of Old Europe. The artists, writers and architects who Theo van Doesburg gathered around him promised to deliver nothing less than the “re-design” of society. They were going the whole hog. From 1919 onwards designer and architect Gerrit Rietveld was also in on the act. At De Stijl he found kindred spirits who, like himself, made no compromises in championing the new. The exhibition “Gerrit Rietveld. The Revolution of Space” at Vitra Design Museum presents the entire spectrum of Rietveld’s oeuvre and places it in the context of Modernist work by contemporaries such as Theo van Doesburg, Bart van der Leck, Le Corbusier and Marcel Breuer. In close cooperation with Centraal Museum in Utrecht and on the basis of the retrospective held there in 2010 more than 300 exhibits have been assembled for the show: above all a lot of furniture, not to mention architectural models, paintings, photographs and about 100 original drawings and plans. Lesser known aspects of his oeuvre are also showcased, such as the sources that inspired his early works and his post-War buildings.

II. From craftsman to designer.

To Rietveld’s mind, space, structure and industrial production were all closely interrelated. He thus noted in 1930 that “even the chair is gradually freeing itself from its complicated past because mechanical production methods mean that new materials and structures are becoming more important than differences in shape.” As early as 1919 Rietveld designed a chair in a completely new spirit: the key to understanding his oeuvre per se. This “Slatted Armchair” is not exactly a product of the customary conventions that dictate what armchairs should look like. On the contrary. The shape is the result of thought on developing a structure that is easy to produce. The chair consists solely of wooden slats and boards. These are brought together in such an ingenious and simple way that they give shape to a complex whole. An animated film featured in the exhibition shows how the chair is assembled; highlighting that the frame not only has to handle functional tasks but also forms a visual node the space. Rietveld breaks with conventions radically. Where predecessors such as Charles Rennie Mackintosh tried to integrate chairs into the overall interior design concept Rietveld goes for a structure that enables him to break open the closed sense of an item of furniture and instead create a spatial structure.

III. The Red and Blue Chair.

In 1919 Rietveld himself described his “Slatted Armchair”, the first version of the “Red and Blue Chair”, as follows: “This chair is the attempt to have each component speak for itself, in its most elementary form, consistent with the function and materials, namely in a formal language that in its proportions is best suited to form a harmonious whole. The structure helps to fuse the parts into a whole without maiming them, without the one dominating the other, such that finally the whole stands clear and free in a room and the materials emphasize the shape. This wooden structure enables you to produce a large chair from slats that are 2.5 x 2.6 centimeters.” In other words, the individual elements become components that are visibly different from one another and are untied to create a spatial composition. The seat and backrest appear to be separate from the frame, jutting out above and over it.

One thing Rietveld most certainly did not want was to create closed spaces. A room or space was meant to continue through the structure. Meaning that the idea was not to perceive the chair but to be able to perceive the surrounding space by dint of the chair. When Van Doesburg published Rietveld’s “Slatted Chair” in the De Stijl journal his enthusiasm for it was unmistakable. He compared the armchair to a Giorgio de Chirico painting and wrote that it was a “slender spatial creature” and an “unintentional yet radical reproduction of open spaces”.

At the time, furniture made of inexpensive materials was often lacquered to protect the wood and enhance the visual appeal, a path Rietveld also took. Above all, in his use of color he sought to create a clear three-dimensional shape and in the red-and-blue version of the “Slatted Chair” he took this to perfection. By emphasizing the front of the slats in yellow he gave these essentially endless lines that ran through the space a clear beginning and end. He did not design a simple frame; he constructed a node in infinite space that thanks to the color accenting can be better perceived.

Rietveld’s design is as much born of the desire for simple production methods just as it is inspired by developments in painting, even though until this day it has proven difficult to determine whether and how Rietveld reacted to the work that artists such as Piet Mondrian or Bart van der Leck were developing in their reduction of objects to simple surfaces in primary colors. It is of course conceivable that Mondrian’s Neo-Plastic paintings made between 1920 and 1923 with their black lines and red, yellow, blue and white planes were the inspiration behind the chair’s coloring, but concrete proof is lacking. We can however ascertain that in Rietveld’s approach the logic of industrial production does allude to the results of artistic abstraction.

Rietveld continued in his experimentation. The 1927 “Birza Chair” was made from a single fiberboard complete with the necessary incisions, which had been soaked in water, pressed into shape and then dried. Rietveld had created a chair from a single element whereby form and construction fuse flawlessly. And it is not only this chair that illustrates why Rietveld’s influence on today’s production methods cannot be overestimated.

Rietveld created the “Berlin Chair” as part of a “space-color-combination”, a collaboration between himself and painter Vilmos Huszár for an art show held in Berlin in 1923. Not only is this piece asymmetrical, it also abolishes the distinction between the frame and the rest of the chair – the seat or the back rest, for example. As before all components here belong to one construction, which creates and structures space, and affords all sides equal optical importance.

From 1925 onwards, Rietveld decided took a new course, working exclusively as an architect. The fact that he continued to experiment with industrial production methods all the same is grounded in the fact that it is often much easier to implement innovative solutions in the furniture industry than it is in architecture. In contrast to the arts and crafts movement, Rietveld does not play the pessimist. He does not seek a return to craftsmanship. On the contrary, he believes that industrial production methods could relieve workers of their burden. Whether a chair was perceived as being beautiful or ugly held no relevance for him. Questions of taste were of no interest to Rietveld. He believed that anything that is useful can be beautiful too.

Made in the 1930s, the outcome of experimentation with fiberboards, the “Zigzag Chair” is a particularly good example of how radically Rietveld could work with materials and form. Once again the chair is made of just one component and the concept is not based upon function or a “modern” style. Rietveld himself described this piece as such: A “small sub-division of the space, it is not a chair, but a frolic of design. I have always described it as a little zigzag.” A frolic but one that would draw great consequences, as illustrated by the series of such chairs right up to Verner Panton to be seen in the exhibition. Z-shaped chairs may have been around during the 1920s, the “Sitzgeiststuhl” by the Rasch brothers for example, but only Rietveld consistently thought of the shape as space and tried to create it using a single-step production process, to subsequently “fold” it. After a whole row of experiments with bleach, fiberboard and curved plywood he was left with a chair made of no more than four boards connected to each other and reinforced with slats and bolts: a baroque spatial bend in a soberly constructive guise. One perceives a construct that one can sit on, but – thanks to a constantly shifting gaze – depicts a space uninterrupted in its continuity at the same time. Continuity and disruption become one. Modern design can hardly get any better or more consequential.

Rietveld even propelled the development of inexpensive, flat-pack furniture. In 1935, long before DIY and Ikea, Rietveld created a series of “Box Furniture” comprising of a chair, desk, shelving and coffee table. The series was made of simple, untreated tongue and groove boards, held together with screws. Plain and rustic, they basically follow the structural principle of overlapping slats. (Unfortunately, today these are only available in an over-priced re-edition series.)

Whatever Rietveld took on, whichever materials and techniques he tried out, and however much his aesthetic changed over the course of 50 years, his objective – to section off a part of the unrestricted space and translate it to a human scale, thus rendering the space palpable and tangible as a reality in itself – remained the same. Rietveld had the ability to make people aware of space and to give them the feeling of being enriched by their surroundings. At the same time, he was convinced that the industrialization of the production process was inescapable; whereby he was adamant that the designer must be in a position to blaze the trail for industrial progress. Anyone who today considers open design concepts, “urban flow” or anything of the like will most certainly find endless inspiration in Rietveld’s work. His buildings are not closed-off blocks and his furniture does not obscure our view. They are open to the world.

Gerrit Rietveld. The Revolution of Space.
From May 17 through September 16, 2012
Vitra Design Museum, Weil am Rhein
www.design-museum.de 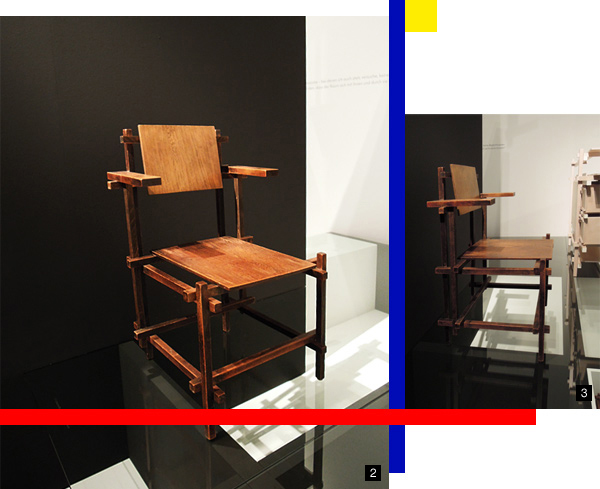 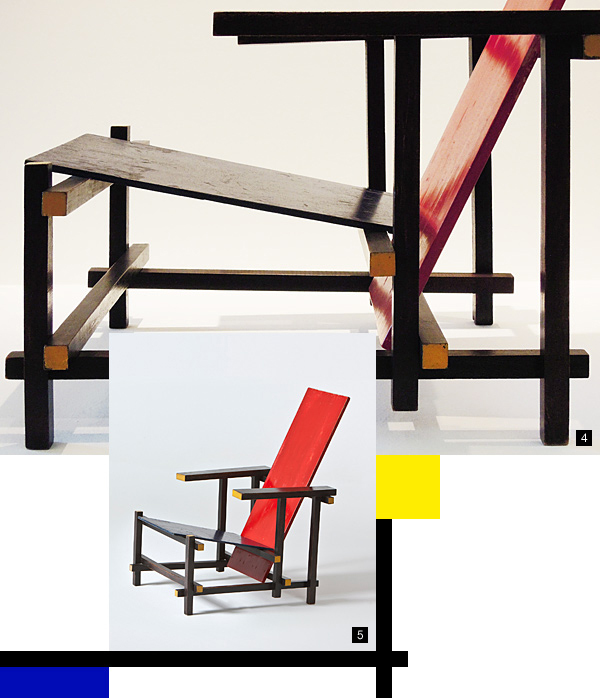 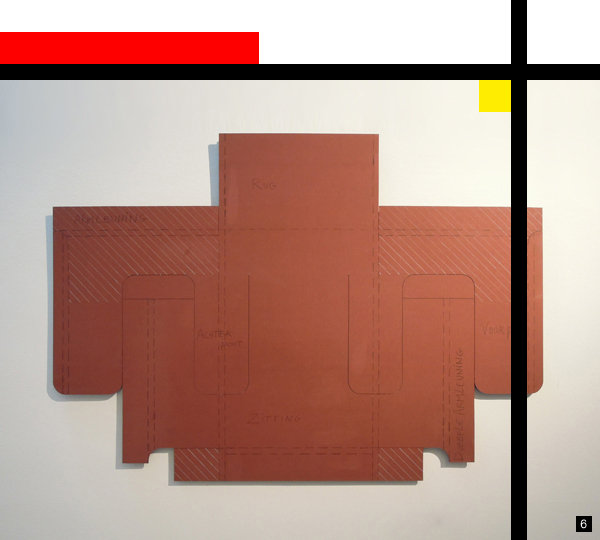 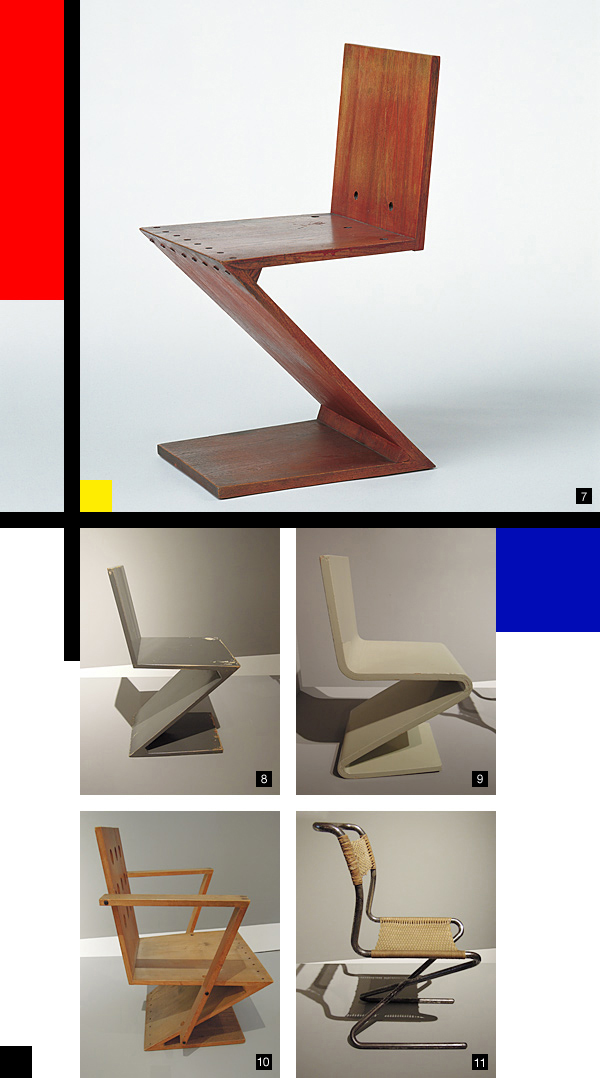 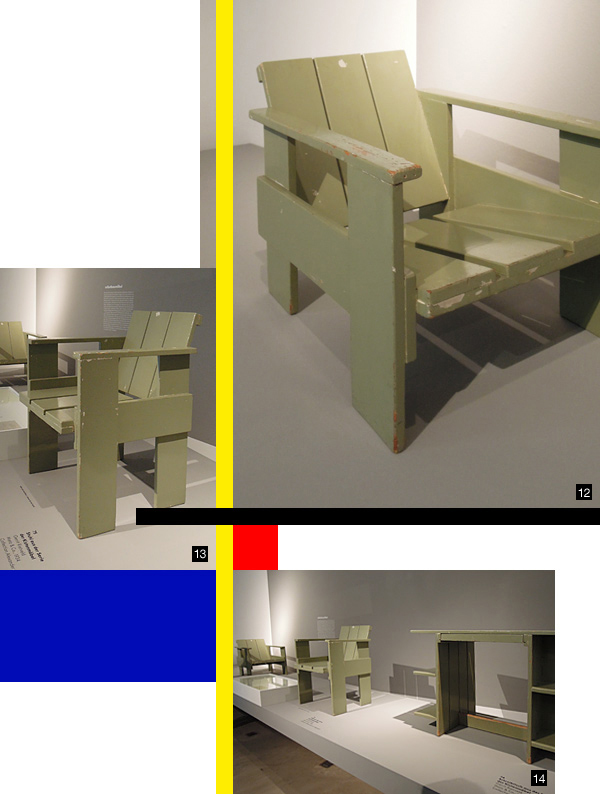 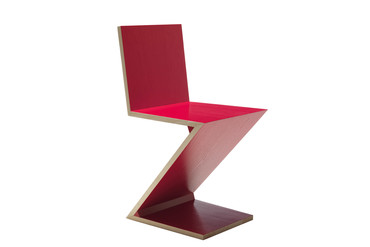 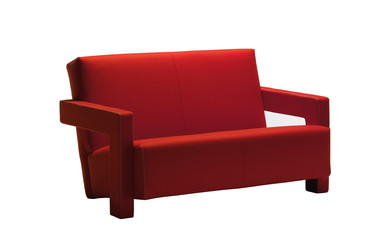 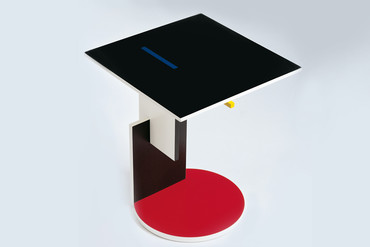 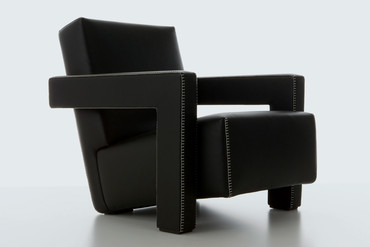