top
Not just afterthoughts of the mainland
by Thomas Wagner | Feb 12, 2011 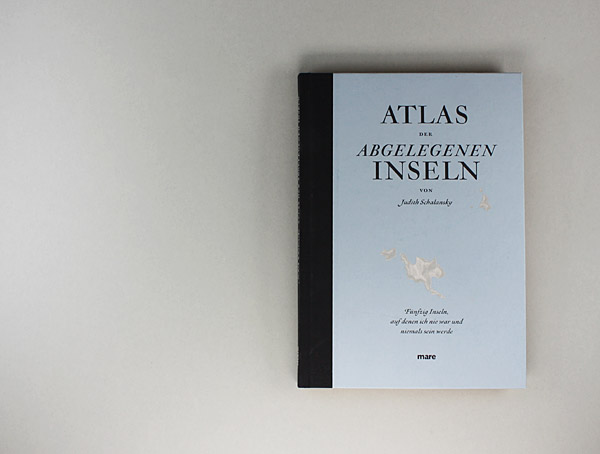 Once, we are told in the story "The man who loves islands" by D.H. Lawrence, "There was a man who loved islands . He was born on one, but it did not suit him because there were too many other people on it, besides himself. He wanted an island that was all his own: not necessarily to be alone on it but to make it a world of his own." While remote islands that just belong to us might be difficult to find in a world that is getting ever small in physical terms, the "Atlas of Remote Islands" by Judith Schalansky will help out. After all, in this atlas, which has meanwhile appeared in the eighth edition, and last year was awarded first prize by Stiftung Buchkunst, fifty islands are featured that "I never set foot on and never will". For this very reason, this beautifully, subtly and elegantly designed book is the ideal instrument for wishing yourself all alone on one, two indeed on many islands, dreaming yourself to the Atlantic, the "Mare Pacifico" or the cold North Sea, and making an island into your own world. Reason enough for guarding over the book like a treasure, of the kind you allegedly find preferably on islands, or at least search for there, because almost everyone today believes a treasure is hidden in some place or other in the world, just not here but rather there, out there on the island, far away from unhappiness here.

But luckily, the book, which has just received the German Design Award in the category communication-design, is not quite as dreamy as it seems . First of all, in the preface the author admits that she grew up "with the atlas" and as such an "atlas child" never traveled abroad. Which is precisely why she loved atlases with their colorful maps, their lines and names, which replaced real places and enabled what she calls "finger journeys". So she would whisper foreign names in her parent's living-room and conquer faraway worlds . But she soon discovered that maps are also committed to an ideology - and from then onwards mistrusted political world maps "in which the countries are spread out on the blue sea like colored towels". Which is why she is more attracted by maps which" do not nationalize nature but lets it become comparable across all the man-made borders". She came to realize the extent to which above all the small, unknown and remote islands are also marginalized in cartography, shoved into small boxes or even omitted altogether, because, of course, the mainland is what is actually important. And she began to wonder what it would be like if the mainland were left out and only the islands were considered, which are so far away from their home country that they do not even fit on the national maps.

So how remote is a remote island? How many weeks of sea voyage would it take to get to it? Is it not a world in its own right? And is this what makes it an ideal projection surface? What attracts adventurers and expeditions to venture into remote places? Is it the whisper of the wind or the hope of a small paradise? Is it what the Californian sailor George Hugh Banning (who traveled across the Pacific as a common sailor with no wish other than to be shipwrecked) thought when he set off for the rarely frequented islands of Southern California. In response to the question what they had to offer he answered: "Nothing, nothing; and that is what is so wonderful." But often enough islands lying in an expanse of sea turn out to be a "disappointment" - and are even called that, such as "Napuka", situated somewhere in the middle of the Pacific, "Disappointment Island". Or they are veritable places of evil, crime and catastrophe, which is why Judith Schalansky cleverly writes above her preface: "Paradise is an island: Hell, too." The names suffice to fire our imagination and place us in a state of ecstasy, whether we look at the precisely drawn map of Rapa Iti or of Amsterdam, travel in our minds to Pitcairn or past Neptune's Window, or look for the passage to Disappointment Island from the Antarctic.

A single example will suffice to demonstrate why cartography must be included in poetic categories, indeed must be considered fine literature - even though it is difficult to decide on one of the fifty islands. However, as I would find it (for all their poetic attraction) simply too cold in the far North or the extreme South I have chosen for my short finder or dream journey the Pingelap Atoll- though I am still a little uncertain.

Pingelap is one of the Caroline Islands, which were discovered in 1783 by Thomas Musgrave; it has 250 inhabitants, and covers an area of just 1,8 square kilometers. It is 780 kilometers from here to the Bikini Atoll, 1,990 to Papua New Guinea, 1,250 to Banaba. "Even the pigs," begins Judith Schalansky" are black-and-white here" as if the animals were made for the 75 Pingelapese citizens, who cannot see colors. Not the bright yellow of the ripe papaya fruit and not the lush evergreen of the dense jungle of breadfruit trees, coconut palms and mangroves. "We discover that this is due to a mutation following a typhoon which devastated the island in 1775, and which only around twenty Pingelapese survived. Ten percent of the Pingelapese are completely color blind, they avoid the light, the day and only when twilight falls do they leave their huts whose windows are covered over with colored foils. "But they become active when it is dark, and move more freely than anyone else. Many of them claim that they always remember their dreams, and some of them say they can even see the dark swarms of fish in deep water at night, can discern them thanks to the pale moonlight, which the small fins reflected."

Though their world might seem gray they can see completely different things. We as visitors to this island, which we stay away from so as not to destroy its dignity and integrity learn from this that impediments do not exist as such. There are just different ways of seeing and, just a different dream - of an island. 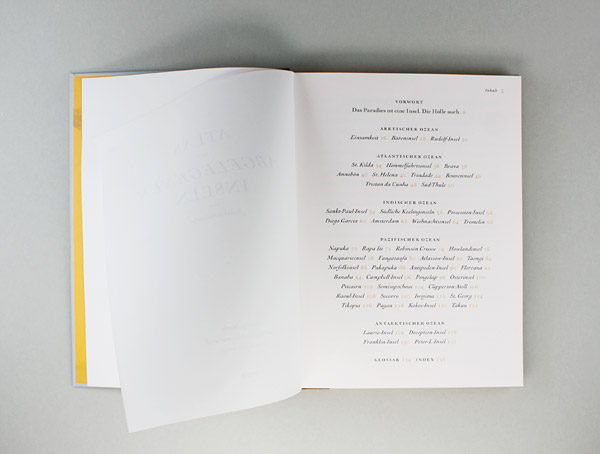 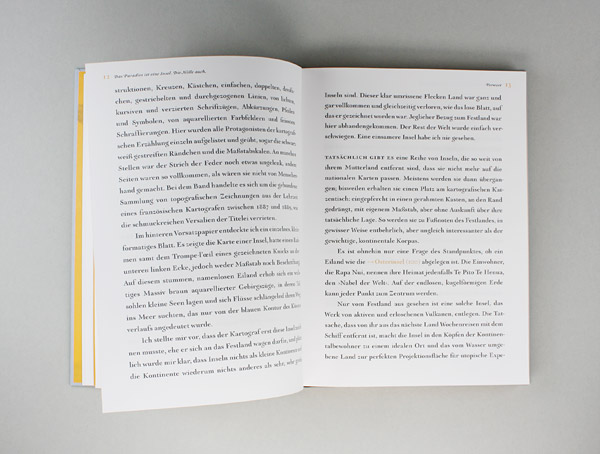 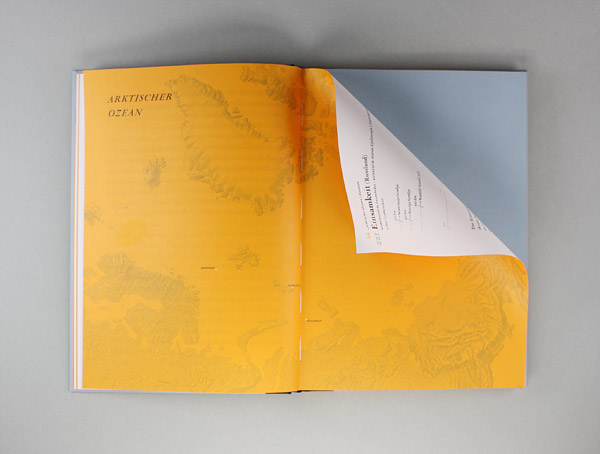 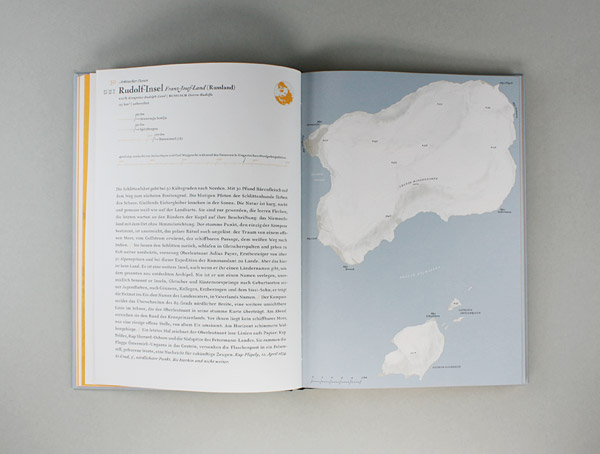 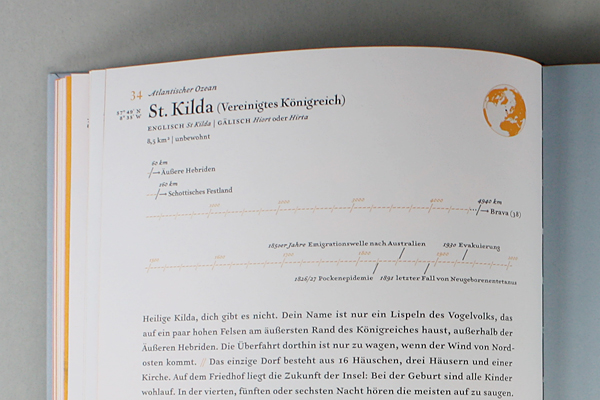 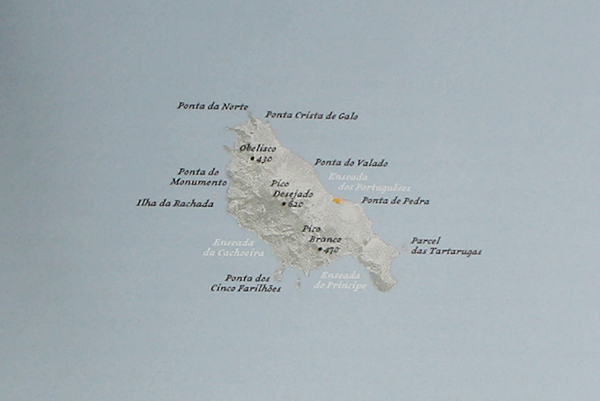 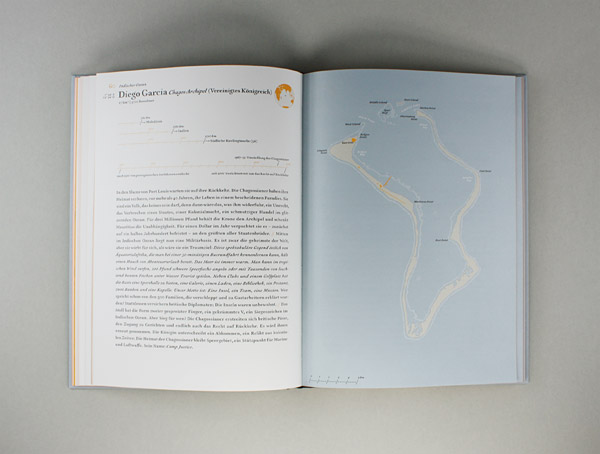 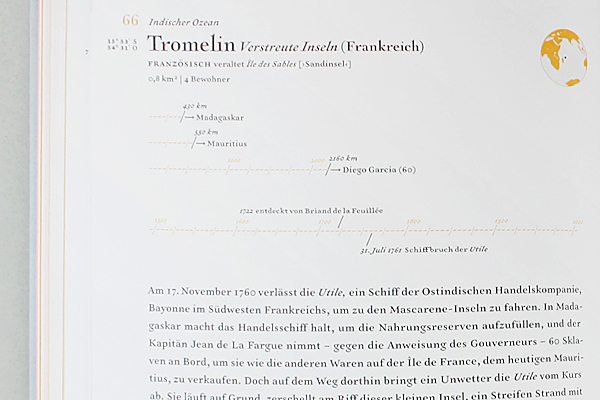 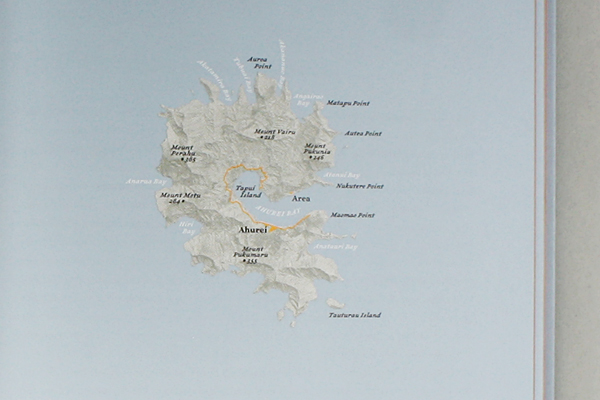 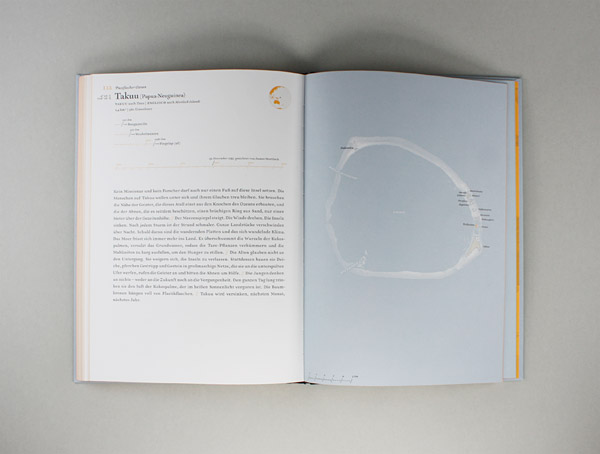 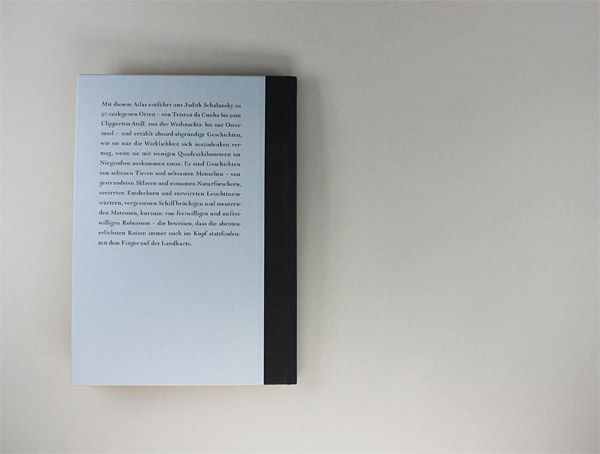