The term is as good as a promise. If you hear the words "lounge chair" you automatically think of comfort, relaxation, of large, spacious and impressively shaped arm chairs. Our notion of such a piece of furniture is essentially defined by the famous "Lounge Chair" created by American designer duo Charles and Ray Eames over more than 50 years ago. Great comfort and status symbol rolled into one. It set functional and formal standards valid to this day for this category of furniture: with its soft upholstered seat shell with the deep seat that tipped slightly backward and its broad, padded armrests – and the separate foot stool which was at the time termed an Ottoman.

The Eames Lounge Chair was designed with the express aim of creating a modern, contemporary version of the English club armchair. Other designers in the last century had had the same idea before the Eames. One of the first, for example, was Josef Hoffmann, who in 1910 gave the classic armchair a strict geometrical form with "Kubus", which Le Corbusier then made truly canonical about 20 years later: with his "LC2" and "LC3" lounge chairs. The latter's key innovation was the visible separation of frame and upholstery cushions. Since then, countless cubed lounge chair designs have come to market. Only few of them as original, however, as Nils-Holger Moormann's recently launched "Bookinist".

Bauhaus man Marcel Breuer also tried his hand at the lounge chair, with different results to those of Le Corbusier. His "Wassily" arm chair, which was originally called "steel club armchair" or "club armchair B3" can be considered as "skin-and-bones version of the English original, as it were. Instead of voluminous upholstery, a taut textile or leather seat spanned on the tubular steel frame delivers the right comfort. Other key designs also pay homage to the principle of spanned materials. Such as Jean Prouvé's "Cité" armchair, Bruno Mathsson's "Pernilla" or the Eames' "Aluminium Lounge Chair". The latter delivers comfort on a par with its older upholstered brother (if we ignore the aluminum armrests, which are almost always too cold in to be pleasant in Germany) while having a less ostentatious and dignified look.

Worthy of mention among the deliberately slender lounge chairs that do without thick upholstery is the "Slow Chair" the Brothers Bouroullec designed a few years ago: its tubular steel frame is spanned by a textile knitted to fit. Formally, it references another lounge chair classic of the 1950s, namely Eero Saarinen's "Womb Chair", which back then was considered a firm alternative to the Eames' version and had a more informal character overall thanks to its textile-covered upholstery. The major designs in the "Mid Century Modern" period include of course George Nelson's "Coconut Chair" and Harry Bertoia's "Diamond Bird Lounge Chair". Both were highly iconic but fell somewhat short of the comfort offered by the versions dreamed up by Saarinen and the Eames.

Trends in 20th-century lounge chair design were influenced not only by the traditional arm chair but the traditional club armchair but the wingback chair, which likewise originated in Britain. The most convincing and best-known reinterpretation of this chair type, which admittedly exuded a somewhat dowdy sense of sedateness, was Arne Jakobsen's "Egg Chair", created in the late 1950s. It gives the sitter a sense of pleasant seclusion without seeming old-fashioned. Jakobsen's fellow countrymen and peers Hans Wegner and Finn Juhl both addressed the theme on several occasions. Wegner's "Oxchair" has the wings mutate almost into horns and Juhl's eccentric "Pelikan" has them as out-sized blinkers. Other versions of this arm chair type of note arose in the 1950s and 1960s in Italy. For example, Franco Albini opted in his "Tre Pezzi" for a body divided into three clearly distinct elements, as had the Eames. Joe Colombo took a different approach and combined his "Elda" lounge chair with a bearing plastic shell and leather upholstery, while Gaetano Pesces' "Up 5" was inspired by Pop Art and was made entirely of plastic. A postmodern version of the wingback chair is Toshiyuki Kita's "Wink", made in 1980. The most striking feature of this armchair, which can morph into a chaiselongue, are the movable wings. Last year, Jaime Hayon presented his "Lounger Chair" (a name that consciously evokes the Eames' version), which is a fresh and persuasive re-interpretation of the classic, relies on the principle of upholstered shells and yet clearly moves in the "wingback" mainstream. The most recent idea in this series is Tom Dixon's "Wingback Chair". It proves that the genre from which it takes its name can once again be a clear benchmark in design – or still is.

Since the mid-20th century there has been a whole raft of designers who tried to take completely new approaches to designing the lounge chair and thus did not rely on the traditional shape. Surprisingly, they include Hans Wegner, who in 1950 presented his "Flag Halyard Chair", which to this very day causes a stir with its unusual shape. Or Pierre Paulin, who created the "Ribbon Chair", an icon of 1960s design. Indeed, that period was a good time for formal experiments per se. Perhaps one of the most radical and anti-traditional solutions was "Sacco" by Gatti, Paolini and Teodoro: a pear-shaped bag filled with polystyrene beads that snuggles up to the sitter's shape and can adopt countless different positions. Needless to say the experimental lounge chairs included the typical products of Pop Art, such as the "Joe" armchair by De Pas, D'Urbino and Lomazzi, which emulates an outsized baseball mitt, or "Capitello", made by designer group "Studio 65" and shaped like the capital of a Classical column. Today, designs such as the Campana Brothers' "Alligator Chair" or "Cartoon Chair" bring that ironic, cheeky and frivolous spirit of those Pop designers come back to life.

Already published in our series on product-typologies:
› "Everything that is furniture" by Thomas Wagner
› "Do not lean back!" on stools by Nina Reetzke 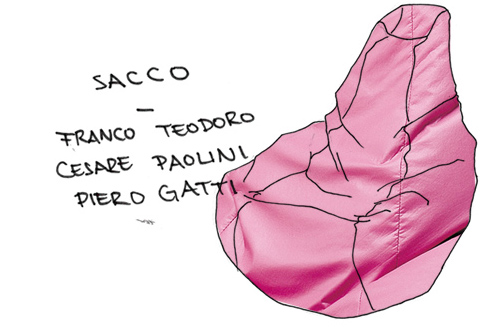 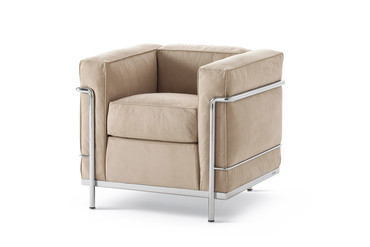 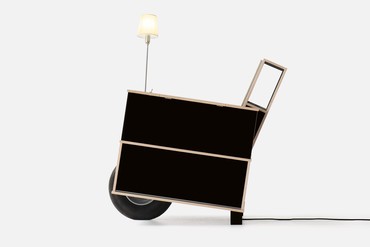 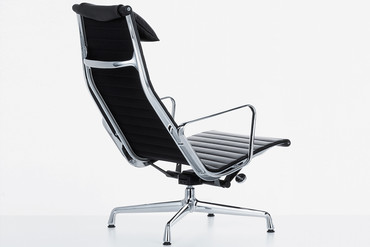 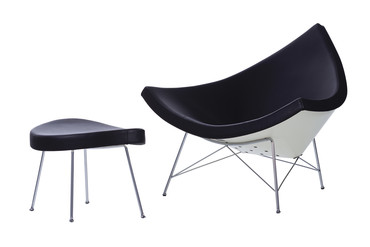 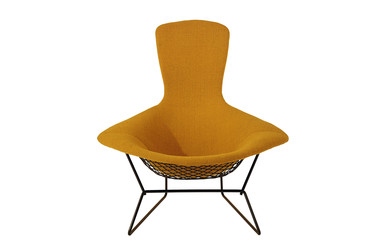 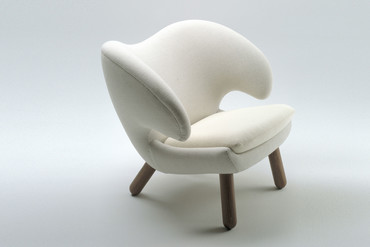 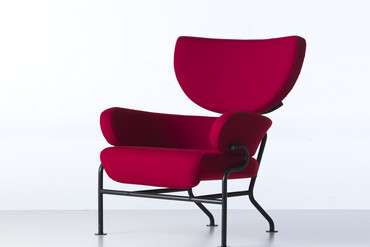 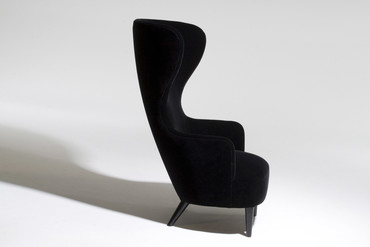 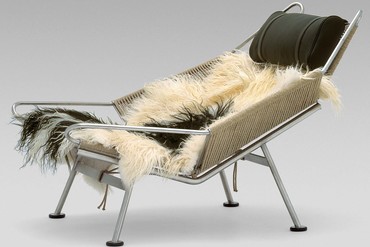 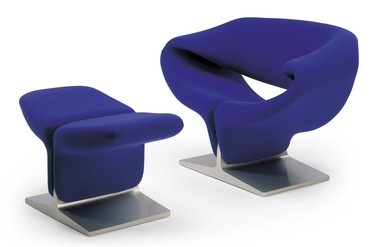 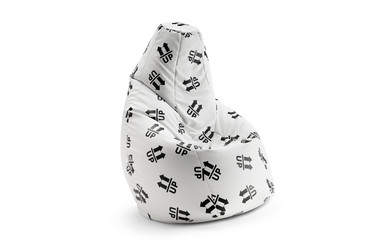 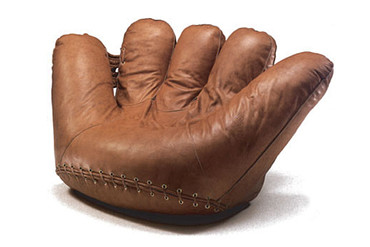 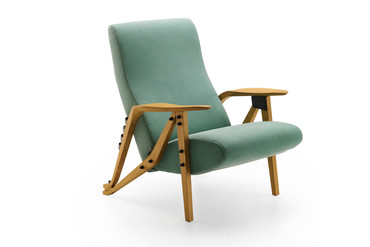 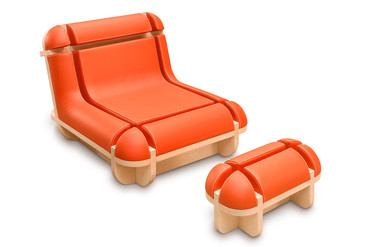 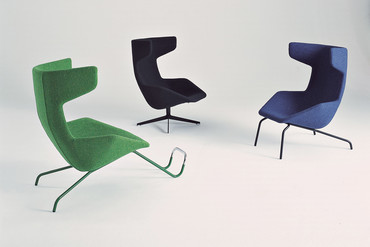 Moroso
Take A Line For A Walk Swivel chair 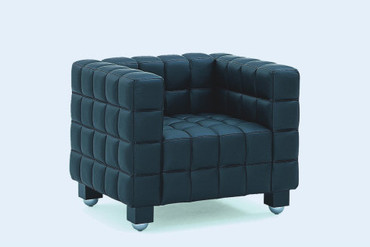