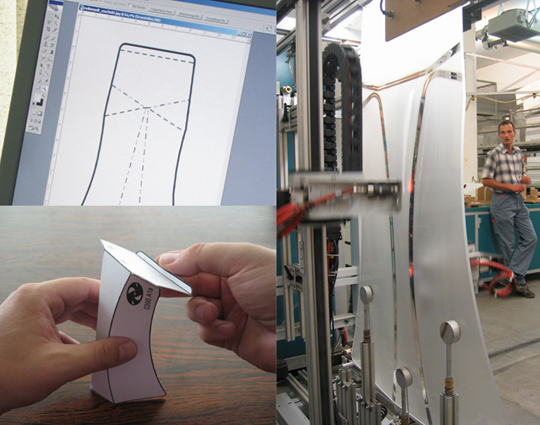 Origami is regarded by many as the harmless hobby of peace-seeking aesthetes who fold little swans or rabbits out of paper. Yet the principles of the art of Japanese paper-folding are increasingly being used in other fields and intelligent folding techniques are also being applied in technical spheres - for example in airbags, solar sails for satellites, and in lenses for space telescopes. Processing thermoplastic materials by folding used to be limited to simple forms. For this reason the Northeim firm Hannecke Display Systeme turned its attention to the question of whether a three-dimensional folding technique could also be used with Plexiglas®.

In CUT'N FOLD® the company has developed an internationally patented process for folding thermoplastic sheet material into three-dimensional bodies, making standard processes of chamfering look old-fashioned: Whereas up until now material could in general only be heated along straight lines and then bent into simple, profile-type bodies, this new technology enables crooked and intersecting, bending lines, and thus three-dimensional products can be created. For this purpose precut Plexiglas® parts are produced and folded into an end product along precise, fixed, bending lines. Only the required bending lines are heated, the parts between remain cold and adjust to the new shape during the folding process.
With more than 30 years of experience in manufacturing displays, Hannecke had accumulated extensive knowledge in processing Plexiglass®, but developing the new technology nonetheless required several test series. Company founder and manager Wolf-Dietrich Hannecke even commissioned the Frauenhofer Institute to find the optimal heat and ideal heating process for the Plexiglas fold-lines. Ultimately the ideal solution was discovered in the company's own ranks, helped by the experience of Hannecke staff member, Dr. Stefan Delecat, who, as an origami expert himself, has been experimenting with paper folding for several years. "The new method of folding along calculated curves," according to Dr. Delecat "had previously received little attention in paper origami and it was only a few years that it began to rouse greater interest. The fact that CUT'N FOLD® now enables ideas for folding such as these to be realized instantly in Plexiglas gives me the opportunity to incorporate my own ideas in the production of everyday products."

The process not only permits new forms, but also features solid practical advantages: With crossed and crooked bending lines, even products made of thin material are extremely stable. Folding along bending lines enables crooked surfaces to be created in the material which can better absorb pressure and tensile loads. The process fills a gap between conventional chamfering technology and shaping by surface heating, as in deep-drawing, in which the structure or transparency of the material is altered. As it is also possible to combine scattered, linear and surface heating, there are increased opportunities and applications in the technical field for shaping. The low tool costs required in the CUT'N FOLD® process also permit small production runs. To date lights, furniture, displays and accessories have been created using the process. There are plans for products such as showcases, covers, room partitions, sound-proofing and camouflage, and trade fair and shop components, as well as applications in the construction sector such as rain shelters for bus stops. 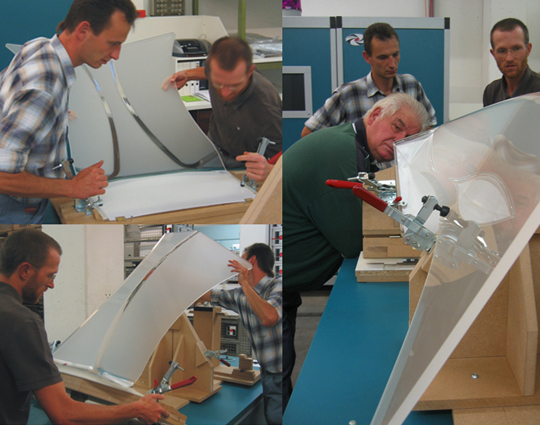