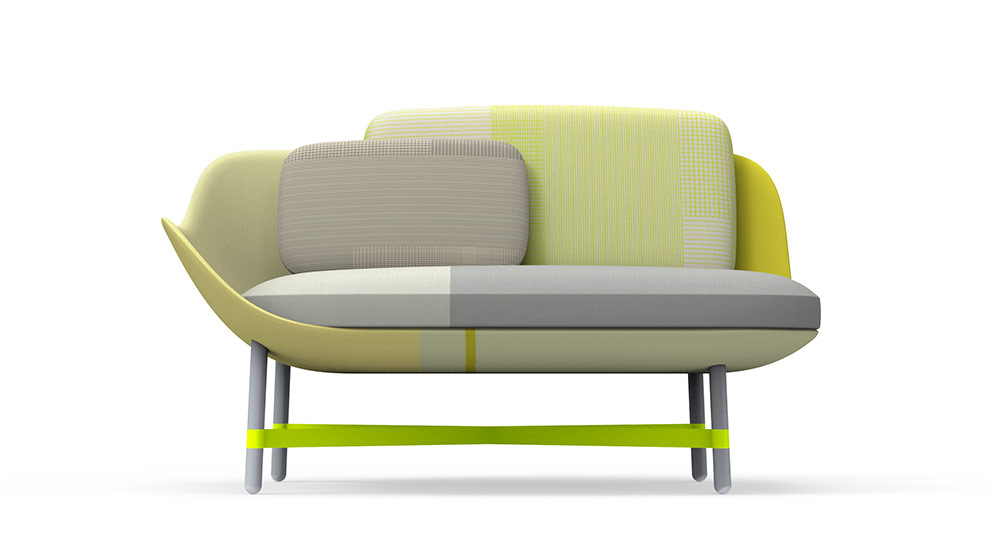 Anyone hearing the word “Ottoman” still invariably thinks of Oriental sitting habits, even if there’s also a shot of exoticism and a breath of Romantic myth associated with it. In French, the adjective “ottoman” simply means that, where as in 18th century France it was also used in the term “lit de repos en ottoman”, a more or less broad settee with an oval seat and a backrest that was rounded at the sides, the ends curved forward to serve as a siderest. And words such as recamière or chaise-longue likewise sound grand. And with such words ringing in your ears, you’ll automatically relax, start to dream and almost already being reclining, on the Ottoman, that is, not the words.

For “Ottoman”, Stefan Scholten and Carole Baijings have returned to the typology of the sofa-like seating bench, but given it a contemporary look and feel. They started with a fabric called “Blocks & Grid” which they had designed for Maharam. The more the two tried out the effect of the fabric’s pattern on existing furniture, the more it seemed imperative to devise their item of furniture.

Since you actually recline more than sit on an ottoman, they reduced the seat height and in contrast to the textile’s pattern, given the low settee a round and organic shape, making it a real beauty that allows you to rest in any number of different positions, be it alone or with another person. The successful formula could thus be: combine decorative fabric in fresh colors with an organic-round shape to promote relaxation or social contacts. (tw)