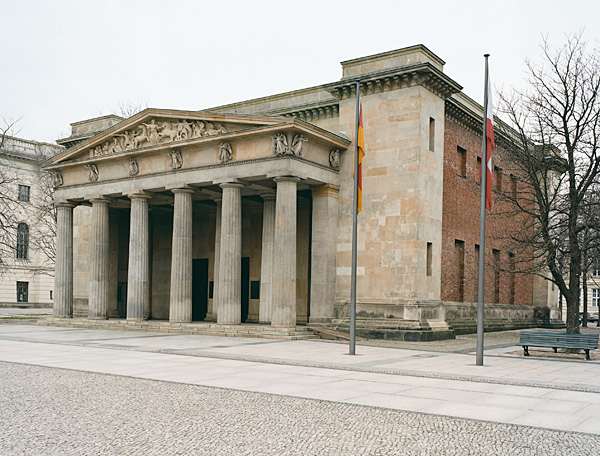 Sometimes the quality of the original for following generations gets lost in the sheer bathos of the epigones and self-appointed disciples. Instead of sober vision you then get the illusion of myth and a factual discussion becomes an ideological debate. The years of tussle over the reconstruction of the Berlin Stadtschloss shows that in such debates urban design or functional arguments are often of secondary importance, and instead emotions lead to far-reaching decisions. Seen down to earth, historical buildings are often so stimulating precisely because their histories are so complex, superimposing the different strata of the then and the now and rendering them visible.

Gerrit Engel’s photographs of Schinkel building s in Berlin and Potsdam form an attempt to pinpoint the testimony to this complex history in the former bastions of the Prussian monarchy. The total of 26 Schinkel buildings that have survived in the region, as documented in the picture book “Schinkel in Berlin und Potsdam” that recently appeared, show both urban monuments in the Prussian kingdom’s capital city and examples of private architecture in the garden realm of nearby Potsdam. The outdoor shots of the buildings designed by Karl Friedrich Schinkel hardly reveal any aspects of the urban planning context, which in most cases no longer exists in its original form. Instead, the factual photographs of the buildings, bereft of humans, speak for themselves as monuments to an epoch worthy of study. The photographer’s hard-nosed eye creates a kind of Schinkel phenomenology that is likewise a school of seeing and an architectural guide.

“Schinkel defined the language of modern architecture as a balance between urbanity and nature, crown and commerce, the Classic and the Gothic, the private sphere and the public world,” writes Barry Bergdoll in the preface to the volume. How different these aspects may be depending on the individual case, be it the casino in Park Glienicke or the Alte Nazarethkirche on Berlin’s Leopoldplatz, the sheer variety of architectural elements that in each case blend to form a canon of their own. The Kavaliershaus on Pfaueninsel that in 1824 Schinkel composed from the façade of a Gothic patrician’s house in Danzig and his own additions seems somehow fragile. The small scale of Schloss Charlottenhof in Potsdam transforms the classicist building with its central projection into an elegant villa tucked away behind its leafy paths and ponds and fountains in Lenné’scher Landschaftspark. And when photographed by Gerrit Engels, even Potsdam’s Nikolaikirche achieves a dignity that ensures the recently renovated central building seems far less monumental than you perhaps remember it as being from your last trip to Potsdam.

“History never copied earlier history, and if it did, then such an act should not be considered history ...,” Schinkel himself observed. Altes Museum am Lustgarten in Berlin, to this day Schinkel’s most important surviving building, shows clearly what Schinkel’s stance involved. The museum building cites Ancient Greek and Roman precursors, such as the dome of the Pantheon, but inserts them in the typology of the 19th century. At the same time the museum opens out to the city’s space, emphatically incorporates it by the curved staircases, and forms the crowning end to Schinkel’s plans for the urban redesign of central Berlin. Mies van der Rohe’s statement that looking at the building you can learn everything about architecture, contributed to creating a myth that has rendered Schinkel himself as good as a monument of architecture. But thanks to Gerrit Engel’s sober photographs that consciously show no interiors, Schinkel is brought back down to the earth of reality, without the this forfeiting anything of the originality of his work. 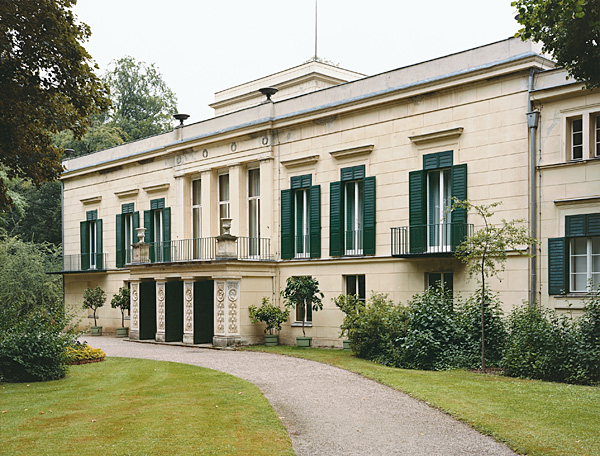 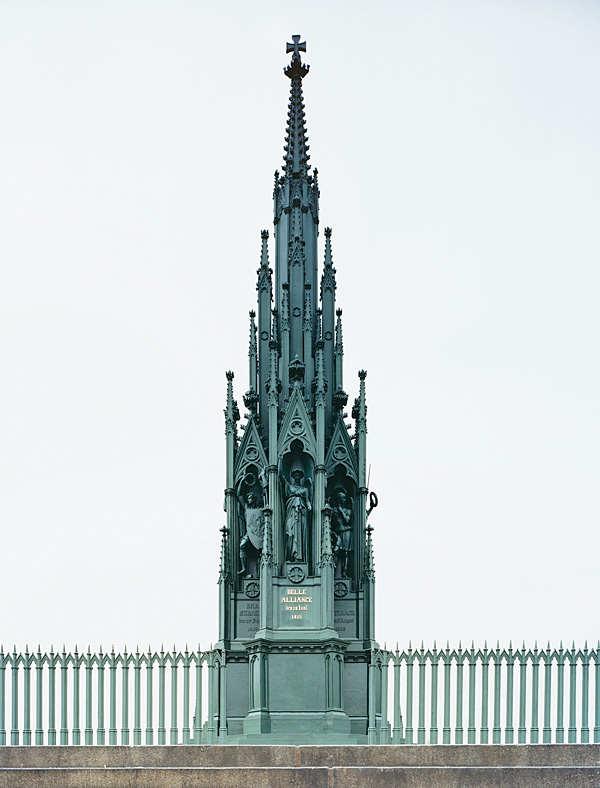 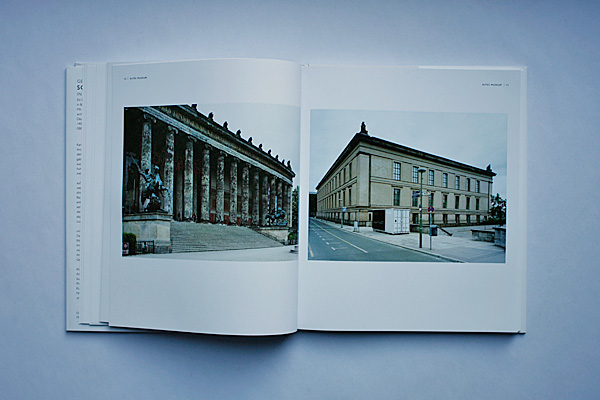 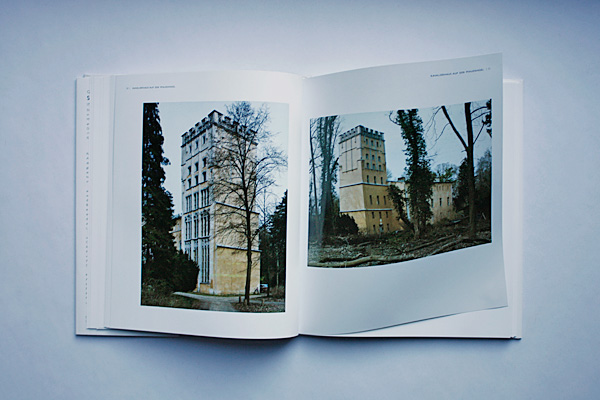 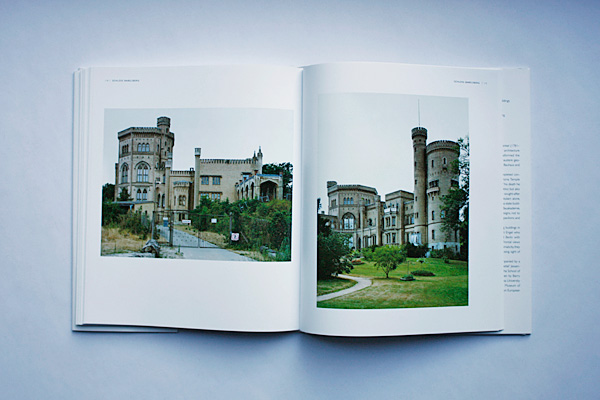 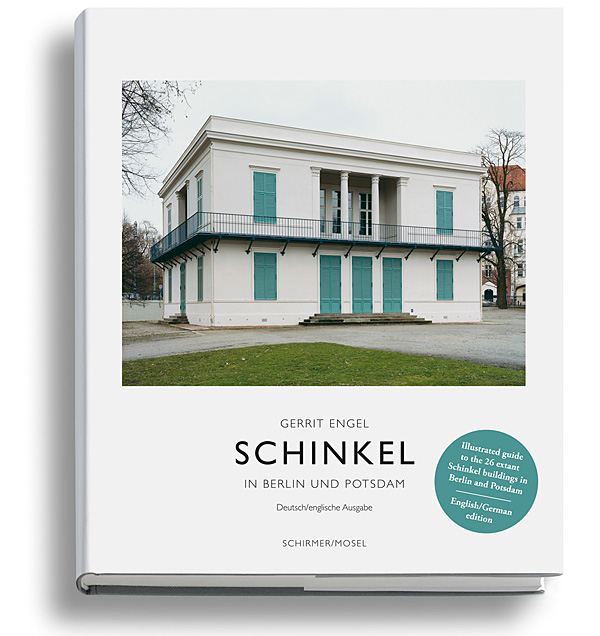