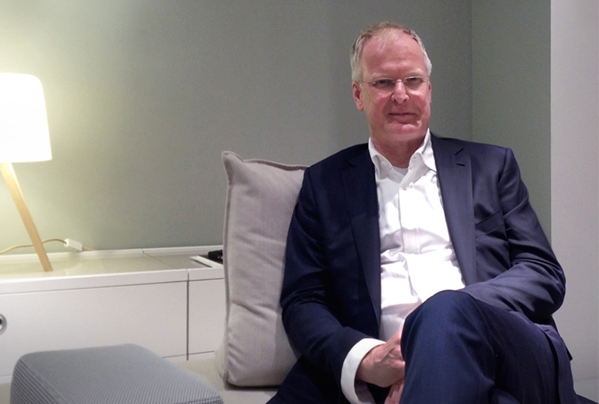 Designer Christian Werner on his “Prado”for Ligne Roset: “We are happy to put our feet on the upholstery and do not want to use separate footstools for this.” Photo © Uta Abendroth

Uta Abendroth: Mr. Werner, re-inventing a furniture type is surely the dream of every designer?

Christian Werner: Well, re-invent, that’s a big word? “Prado”, which means a ‘meadow’, takes into account the change in habits life today brings with it. I have watched how we at home use the sofa as a family. And I’ve noticed that we use it in more ways and more leisurely than was formerly the case. We no longer sit so straight on it but prefer to sink back into the cushions. We are happy to put our feet on the upholstery and do not want to use separate footstools for this. And since we are using an increasing number of things direct on the sofa we certainly require a lot of space on it.

Meaning you have omitted more or less all the other things that usually go to make up a sofa?

Well, omitting is perhaps not quite the right term. I simply was freer in devising “Prado”: No fixed back or armrests, instead upholstery that can be positioned as required, encouraging users to decide the ideal position for themselves. Irrespective of the proportions you have, be you large or small, this variability makes certain everyone enjoys the same level of comfort. And the sofa functions for all sorts of age groups.

Without the cushions the sofa somehow resembles a free-floating futon.

Yes, “Prado” does indeed have a floating touch to it. The out-sized seating surface is available in two sizes: 200 x 100 centimeters or 240 x 120 centimeters. The extreme depth invites you to “set up shop” on the sofa, as it were. And there’s another side to the sheer size, too: Even in the smaller version, “Prado” is suitable as a guest bed. That wasn’t actually what I set out to do, but kind of happened in passing. But such a piece of furniture proves practical precisely if there’s no space for a separate guest bedroom. There’s no complicated technology that sometimes prevent people from really embracing sofa-beds. And the end-to-end padding ensures you sleep easy, even if you spend a few nights in a row on the sofa.

It features a triple structure, starting with the metal runners, then a frame, which angles inwards downwards to reinforce the sense of floating, and a single-piece upholstery section on top.

And the cushions that serve as the backrest?

They are likewise tripartite: The molded section is made of foam, then there’s a stabilizing insert made of metal with elastic belts, and finally the comfort padding with a goose-feather in-fill in chambers.

How does it rate in terms of stability and practicality?

With my model-builder I spent a lot of time experimenting... We tried out different materials, different shapes and all manner of possible combinations. And later the model-builders at Ligne Roset devoted a lot of energy and all their know-how to developing. Now the backrests are held in place on the seating surface both by their own weight and by the non-slip coating on the lower side. No fasteners are needed even if the sitters are large or heavy. I really like the fact that you can use the cushions on the floor, too, which kind of adds another dimension, too. My kids often do that: All you have to do is turn the cushions round, and then the incline is just right for lying on them and watching TV.

Was “Prado” commissioned by Ligne Roset because the company lacked such a product in its portfolio?

No, in this case Ligne Roset did not approach me, but I took my design to Michel Roset. Once I had the finished model and looked at it I thought that it would fit the company and its collection down to a T. I sent pictures of the “Prado” to Michel and only a few hours later he had responded. I then sent the prototype to France and there they set about advancing the concept.

And you designed a few extras.

Yes. The “Oda” tables. The smaller one is a kind of side-table, the larger one a coffee table. Both have the right height to be pushed in a little way over the sofa. Here the underlying idea was again that furniture needs to keep pace with the new media and changed habits.

I like the fact that “Prado” does not have a front or back in the conventional sense, and that the sofa actually best works as a standalone.

You have a “Prado” in your own living room. Which version did you go for?

We chose the larger version with gray upholstery covers. My wife said that the sofa had a touch of a Mies van der Rohe design about it. But “Prado” changes dramatically depending on the type of fabric used and the color.

Do you ever get to use the sofa on your own?

In the morning, when everyone else has fled the nest. Then I get comfy with the paper and a cup of coffee, and could spend all day there.

A brighter Modernism: Instead of going for the new, at the imm cologne they’ve updated the tried-and-true. And revitalized Modernism.
(17 January 2014)

Celebrating 40 years of comfiness: turning Togo into an emblem of easy living
(19 November 2013) 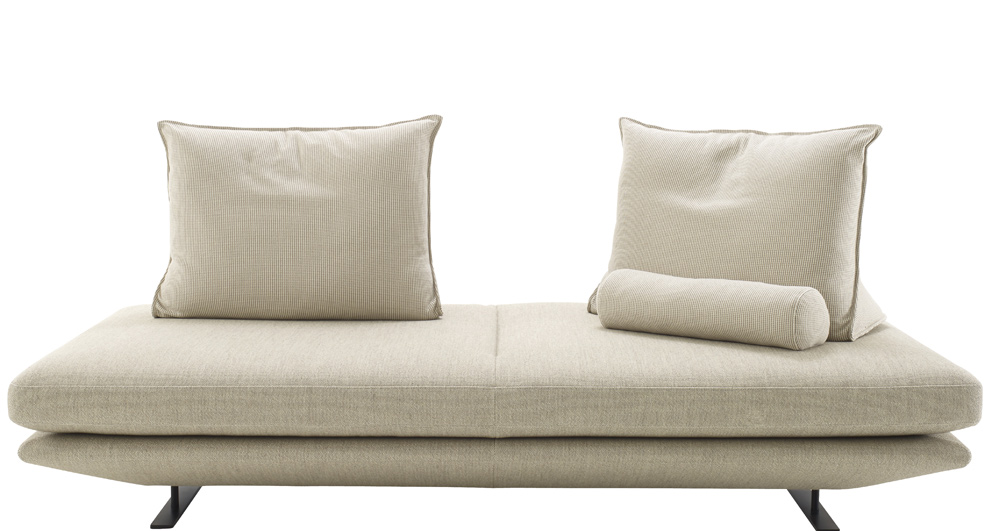 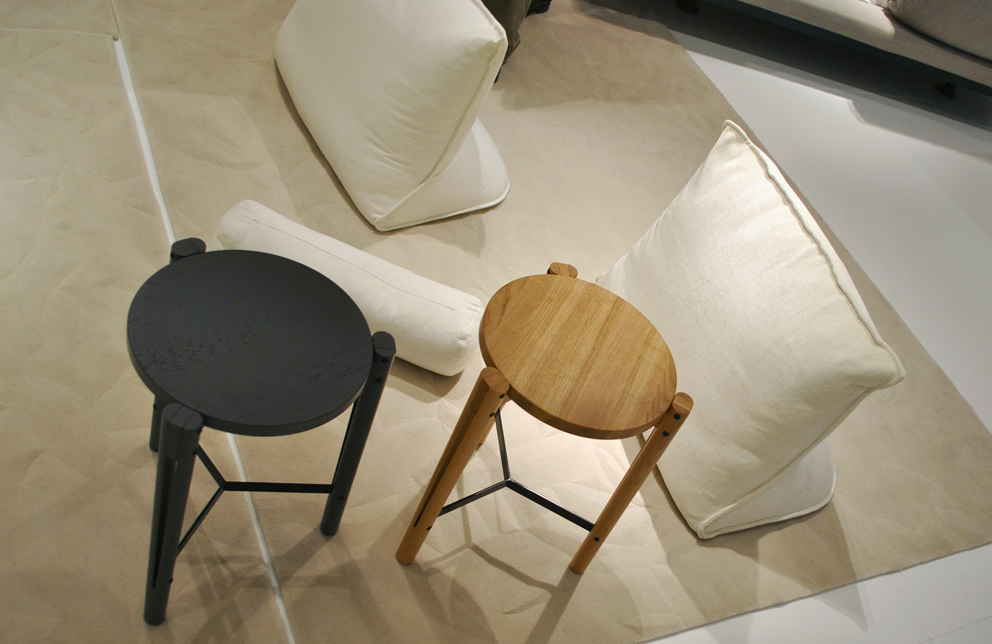 The single seat backs work as well on the sofa as on the floor. Photo © Leyla Basaran, Stylepark 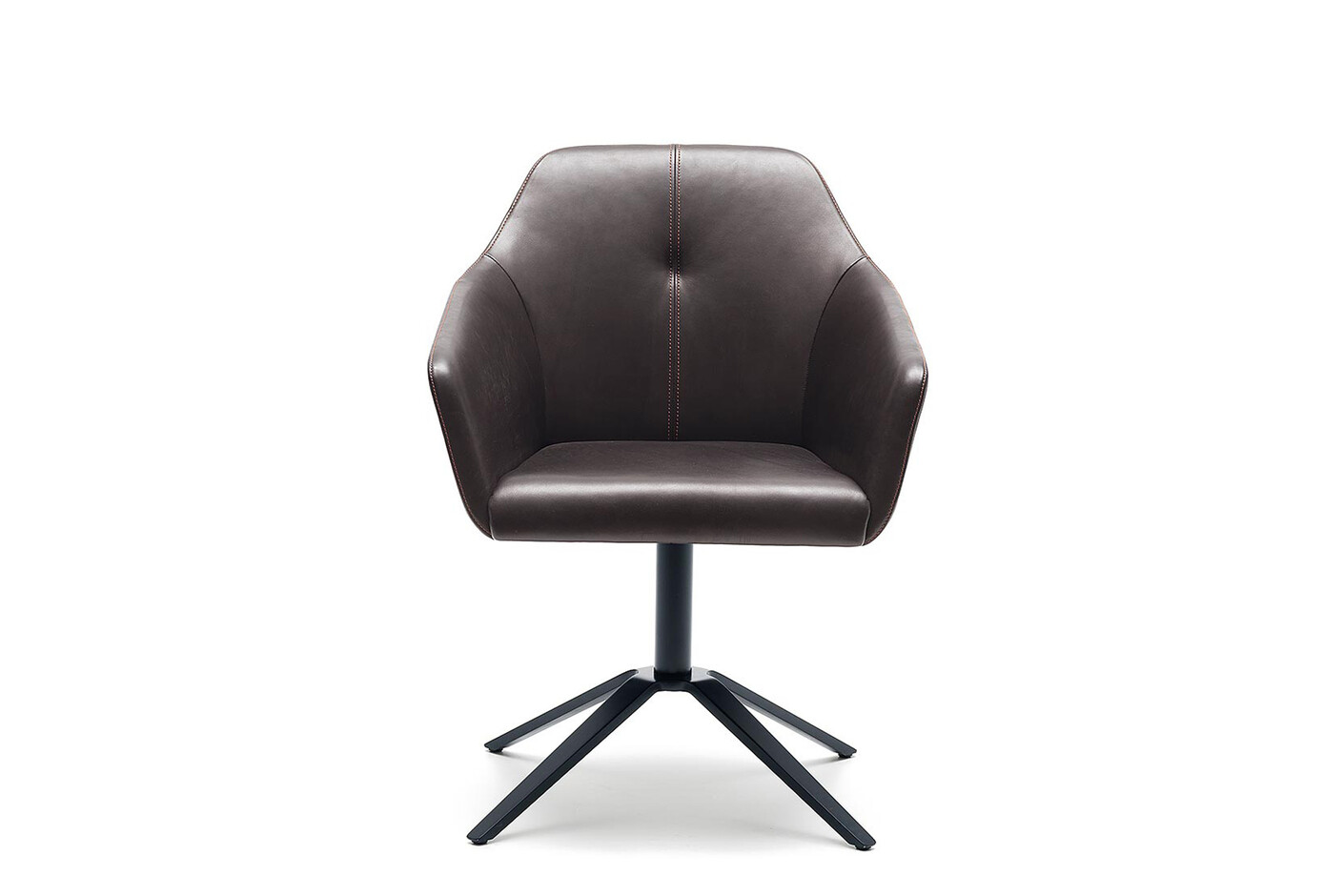