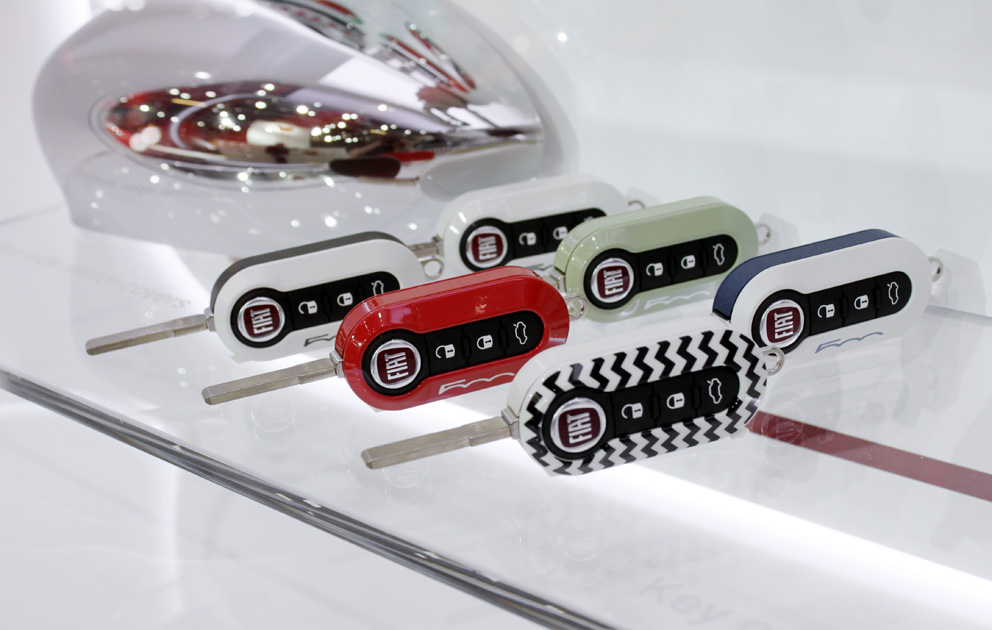 A typical scene: The guy drops his car keys on the table, casually, but not quite by chance. The “statement piece” is meant to show that there’s more to come, as regards both the car – and the guy and the gal. Anachronistic you say? Nowadays, when you only need to press a button to start a car, just like with your PC? That’s as may be, but the key is still the only thing you have with you after parking the car. When you’re home, it’s the key that tells you that you own a great car. And if you give someone the key, then you do so knowing the gratitude in the eyes of the receiver, who judges the status of your car by this insignia – and by extension of the person handing it over.

So how is this magical symbol designed today? Can we infer from its shape anything about the marque and the experiences it offers? We checked things out at the IAA and asked to see the latest examples, which was by no means easy, for not always were keys to the models on show to be found. Specifically Italian makers seem to entrust their keys to some ominous and very powerful person who answers to the name of “the engineer”. It is he who unlocks the car in the morning and locks it up again come evening, and disappears for the rest of the day. But we had a highly engaging “key time” all the same.

Play with me: Left the Tesla car keys and the right the Porsche ones. Photo © Adeline Seidel, Stylepark

Porsche showed how to do it, Tesla does it better: The key is shaped like a toy car. While the Porsche key boasts a somewhat coarse version of the logo and the relevant buttons in the abstract model, Tesla drivers get a miniature version of their vehicle as the key. No space for buttons here, use is all intuitive. You simply touch the section of the car you want to activate. Press twice on the toy car’s hatchback and the one on the real thing opens like sesame.

One could almost assume that the more sporty the car (and driver) want to be, the more stainless steel the key features. Left Bentley, right Maserati. Photo © Adeline Seidel, Stylepark

Show me your car key and I’ll tell you who you are, or so one might assume. But if you own an expensive set of wheels you no doubt also want a big key to show off with. Well, the idea seems to be borne out by Bentley and Rolls Royce. At Rolls Royce we’re not even allowed to touch the key, and a dame wearing gloves holds it out to shine brightly on celluloid. Even if the plastic key doesn’t actually exude the ultimate in quality its massive proportions fit the vehicle.
By contrast, Bentley goes for lots of sleek metal with different finishes. The key’s a bit like a UFO, weighs heavy on your palm, and even in your pocket is forever seeking attention. Maserati goes the same way. One could almost assume that the more sporty the car (and driver) want to be, the more stainless steel the key features. And of course here, too, exceptions prove the rule. The Audi R8 key largely eschews such metal and simply writes the vehicle’s name on the key. R8. Wow, see that?!

BMW (left) is composed of stylized dynamics. And who drives an Audi R8 (key right), wants to show that. Photo © Adeline Seidel, Stylepark

The Rolls Royce key is a chunk, too. Photo © Adeline Seidel, Stylepark

BMW has conjured up something bulky for its new 7 Series: alongside the main key, which is pretty unobtrusive, there’s a second, far larger one. Which can do all sorts of extra things. At first sight it resembles a clam phone, but really it is more of a smartphone: Using the key’s display you can have the car park itself by “Remote Control Parking” or get all manner of data onscreen, such as the distance left to the next fender. The question is when the key and its display will themselves need their own case, as few pockets are large enough to take it.

For the new 7 Series BMW has developed the first key with a display. Photos © Adeline Seidel, Robert Volhard, Stylepark

Fiat has also looked to cell phones to hone the appearance of its key. Or rather to those that are genuinely or purportedly individualized by skins. Which is why you can now dress up your car key in different skins so that it seems to be your auto’s little friend and an extension of your personality. Incidentally, at Mercedes-Benz no key was sadly to be found, but in the store for devotional Mercedes articles you can have a key chain made that proudly displays the type of your car in silver letters. Hey, maybe someone driving an A or B class is simply not allowed to have an “S” engraved on their keychain? 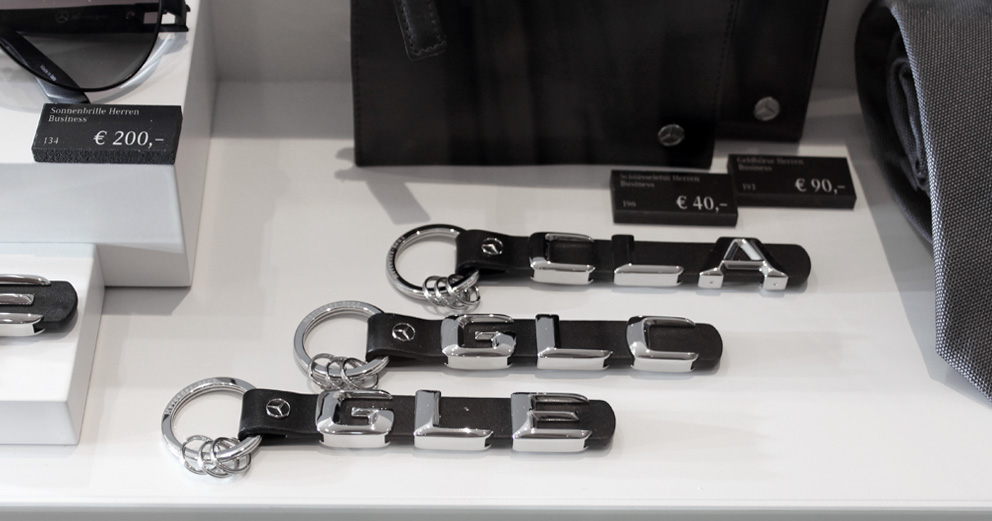 Mercedes offers additional Kitsch for the keychain, but is not showing his keys. Photo © Adeline Seidel, Stylepark

Jaguar and Land Rover seem to be modest: To make sure things don’t get mixed up, the key’s stainless steel element comes engraved with the marque name. Otherwise, these plain smooth black plastic objects with the rounded edges that weigh so sweetly in the hand are as good as identical. British understatement perhaps. What they didn’t show us: for its new “F-Pace” SUV Jaguar offers a black bracelet as a substitute for the key. This “Activity Key” is meant for all of you who love sports activities but would be irritated by a key or might simply lose it.

The key of Jaguar and Land Rover are distinguished only by the lettering. Otherwise, they are identical. Photo © Adeline Seidel, Stylepark

What they didn’t show us: for its new “F-Pace” SUV Jaguar offers a black bracelet as a substitute for the key. Photomontage © Jaguar/Stylepark

Mini drivers, or so the marketing would have it, are joyful fun guys. And the key conveys this, too: Firm, round and flat, it promises a lot of fun and emphasizes a degree of non-conformity. You’d expect something similar of the Smart where for years the word has been that it’s so “fun” and “youthful”. A glance at the key shows that evidently it’s only practicalities that count in Smarts. The satin gray plastic key does not reveal any signs of design, so don’t expect any sense of marque identity here.