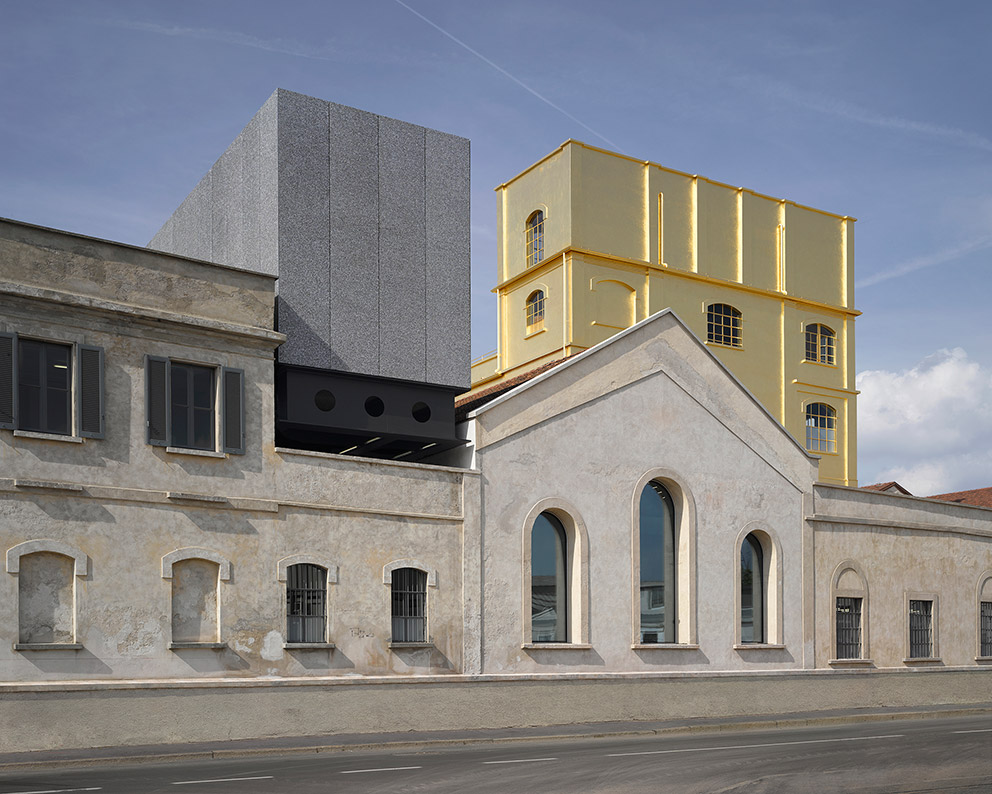 Rem Koolhaas wanted new and old going seamlessly together – and creates with the Fondazione Prada in Milan a collage of materials and architecture. Photo © Bas Princen

The golden house gleams and most certainly stands out from its surroundings even from a distance. The cab driver knew neither the name of the street nor the name Fondazione Prada, but he definitely knew where the golden house was, or so he said. After all it is the talk of the town or the district. Si, capisce. Rem Koolhaas says in the press conference that the goldleaf frontage was a “spontaneous decision taken at the last minute” and adds that goldleaf is a forgotten but outstanding material for facades; into the bargain it is far more cost-effective than many other materials such as marble. Moreover, he insists the project is not so much about boastfully showing gold, and instead all about displaying wealth. Not in the monetary sense, but the kind of wealth that arises from diversity, perfection, spaces and materials. And it is all about placing different types of material properties next to one another, highlighting changes, colors, and surfaces. This is a language that both companies involved in the project speak fluently, the one in the world of fashion, the other in that of architecture.

The new Fondazione Prada is located in south Milan. The district consists mainly of residential blocks, industrial halls, car dealerships and an abandoned railway track. The complex where the Fondazione Prada now stands was once a distillery, with buildings that are in part a century old and wrap round the plot like a frame. From the outside all you notice is the golden house, the upper stories of which temptingly protrude out over the old edifices, and a part of the silver gleaming façade of a new building that stretches out over the old structures as far as the street. OMA has been chiseling away at the plans for the 19,000 square meters of the site since 2008 – now, only the tower (“Torre”), a ten-storey high-rise with additional exhibition spaces, is still under construction although it, too, is scheduled to be commissioned by the end of the year.

Marrying the old and the new

When describing the task at hand Rem Koolhaas terms it a matter of classic modernization: “We analyzed the site and wanted old and new to blend seamlessly.” The architects therefore only added two new buildings to the complex (well, three if you count the “Torre”). The one is a massive cube, clad in aluminum foam that features an open-pored coral-like texture that lazily glows silver. The other building perfectly emulates the basic shape of a former hall that was beyond salvaging. It has a reflective façade on all sides and thus has something of a mirage about it. Both the new builds were not simply plumped on the grounds as brash standalones that celebrate only themselves and instead interconnect with the existing buildings, jut out over these, overlap and blend with them. 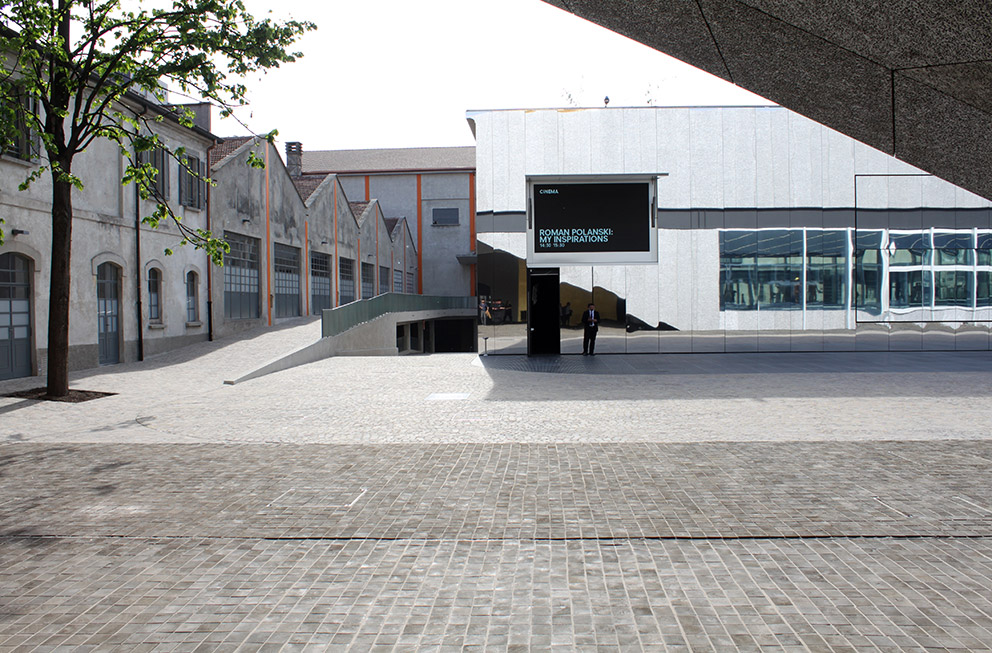 The existing buildings of the former distillery surround the area like a frame. Photo © Adeline Seidel, Stylepark

An anthology of spaces

The complex is sub-divided by the various outdoor areas, which differ in terms of size, topography and material properties. The one forms a street, the other a large square, a third an intimate courtyard shaped by the interaction of buildings and protruding roofs. So perfect are they here, so precisely composed that it is almost as if the architects visited some of the most gorgeous public spaces and plazas in Italy and have taken these as the benchmark to be emulated on the Prada grounds. Thus, between the golden house and one of the existing buildings a sweet little space has been created. More a large entrance into a courtyard than a real piazza, this is a space where people automatically gather and which exudes a sense of protected openness. By contrast, a Piazza arises between the two new builds and seems to double in size thanks to the reflective façade on the one side.

It is not just the outdoor areas, but also the interiors that form a unique collection: Each exhibition space, and yes, I mean every one of them, is different. This spatial repertoire offers Fondazione Prada and its wide-ranging art collection a great opportunity to be able to exhibit truly any kind of art. At the same time, this anthology of spaces guides the visitor around the grounds, constantly surprising you with a new and different setting, as if it were a city in its own right: Pradapolis.

The flair for collage, contrast, coalitions and overlaps is something to be seen not just in the spaces and volumes, as it is also in evidence in the rich seam of materials used, which range from steel, aluminum, goldleaf, glass, plaster, plastic, wood, to perforated sheet metal, concrete and travertine. And as if that were not more than most architects could cope with, the materials are also used in a variety of versions. Nonchalantly, Koolhaas plays out the different material typologies: Steel is present as a grid, in perforated or in mesh form, not to mention as a dot raster; wood is used as cobbles and as wall panels – and so on and so forth. Some of this has been manifest in other OMA designs. But here Koohlhaas’ architectural idiom achieves a new degree of refinement and attests to a new love for detail. The gables of an old building snuggles up to an aluminum facade, whereby the reflective elements of the frontage can unfold such that the building seems to disappear; and the arched windows of an old building are cited in an enlarged and abstract form in the glass of the new build. 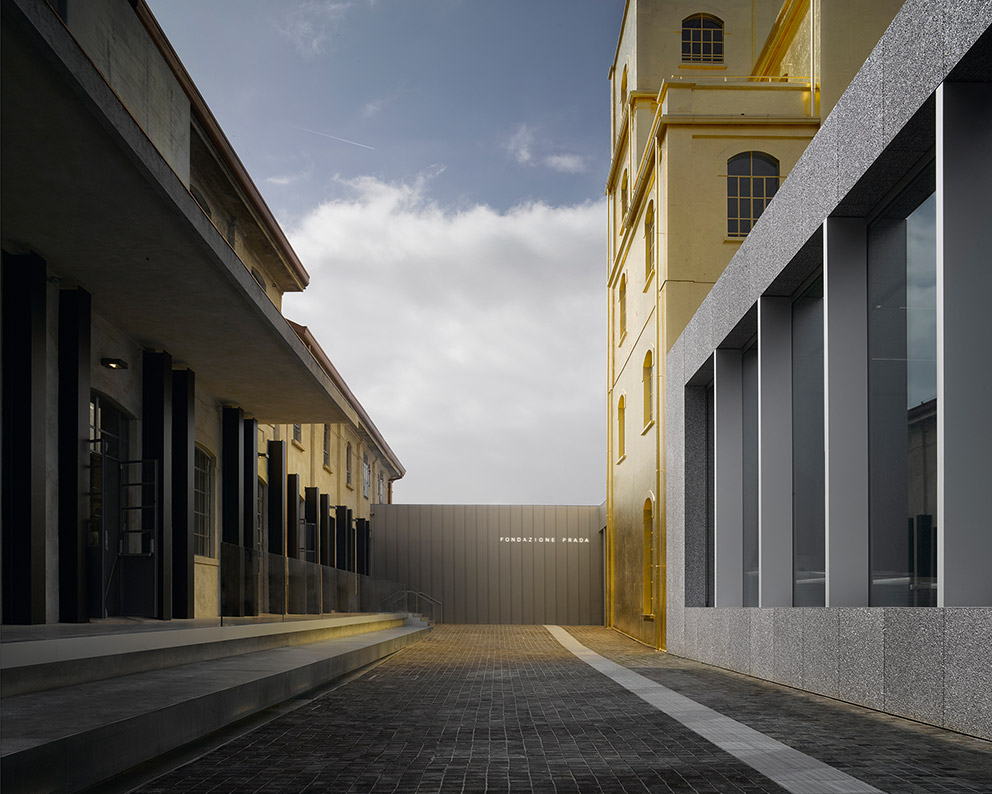 Koolhaas-Collage as the underlying principle

The Fondazione Prada wonderland is such a marvel thanks not only to the precise details to the rooms, structures and textures, but above all to the skillful combination of these different elements. Who knows, perhaps the fashion company feel has rubbed off a bit on the architects? Or is it that down through the years of collaboration a mutual language has arisen? Be that as it may, it is constantly surprising how well the in part idiosyncratic and powerful materials and structures go together. The foamed aluminum panels go superbly with the travertine, while the different metal, stone and wooden floorings give each outdoor area a look of its own and subtly divide them into zones. At the same time, the robust and largely industrially materials are exceptionally elegant.

In the spirit of the brand

The Fondazione Prada campus in Milan (Fondazione Prada has an exhibition satellite at Ca’ Corner della Regina in Venice) now takes its place alongside the museums of other fashion empires. Last year, Frank Gehry’s blast of shapes opened as the Fondation Louis Vuitton in Paris, on May 1, 2015 haute couturier Giorgio Armani inaugurated his mausoleum of fine grey plaster in former silos in Milan’s Zona Tortona. While Gehry primarily celebrates his brand architecture and Armani first and foremost celebrates himself, the Fondazione Prada campus is a place that celebrates a collage of art and architecture, of spaces, light and materials – with a precision, lightness and devotion to detail that has long been missing in buildings. With the Milan ensemble, Rem Koolhaas has scored a major victory in the battle against bland me-too’s in architecture and in doing so has created a space that renders homage to the spirit of Prada. 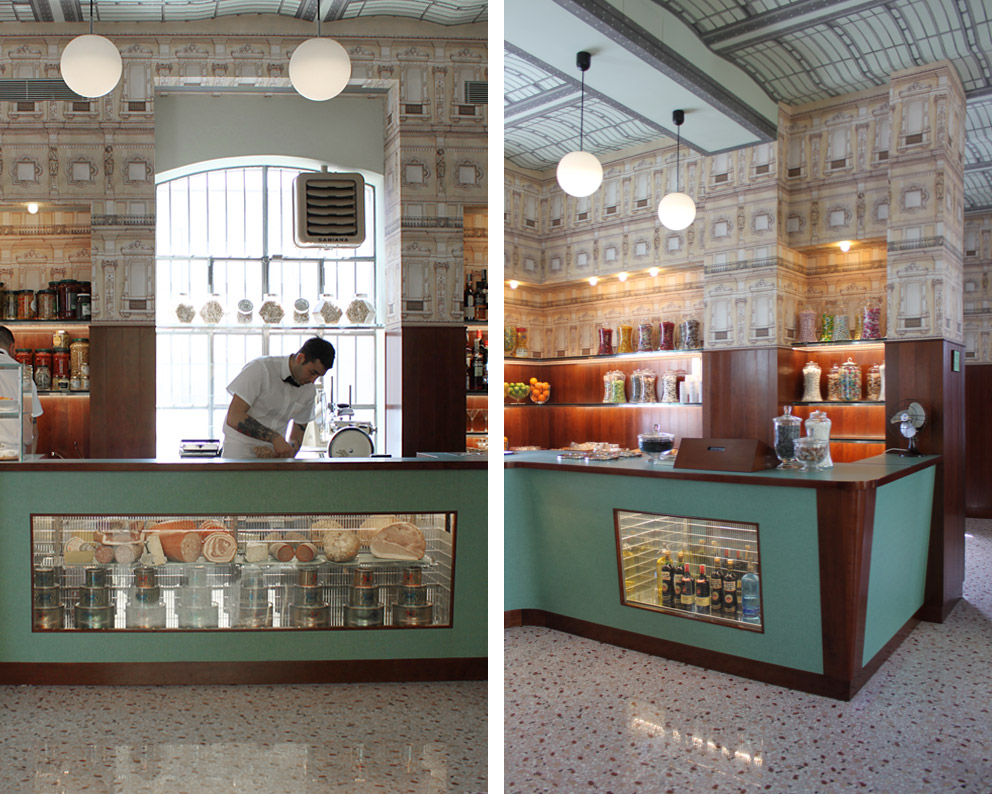 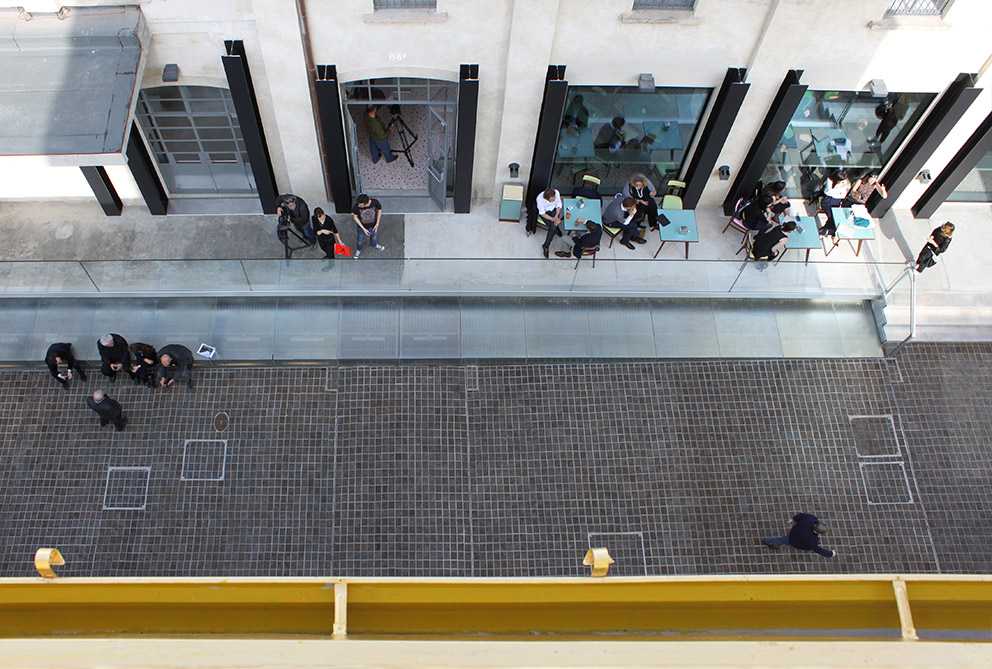 Between the golden house and one of the bar a sweet little space has been created. More a large entrance into a courtyard than a real piazza, this is a space where people automatically gather and which exudes a sense of protected openness. Photo © Adeline Seidel, Stylepark 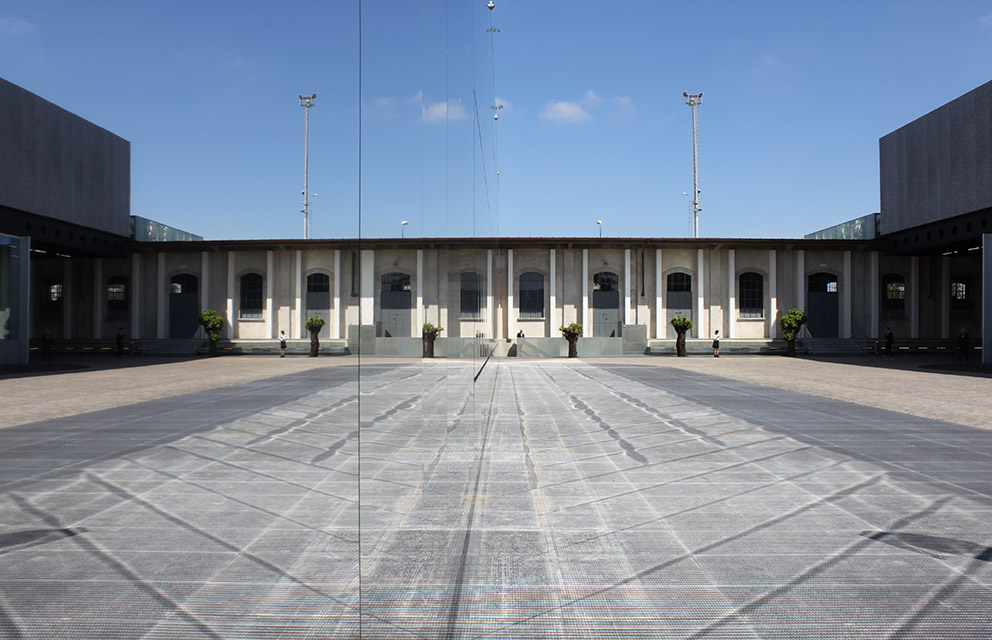 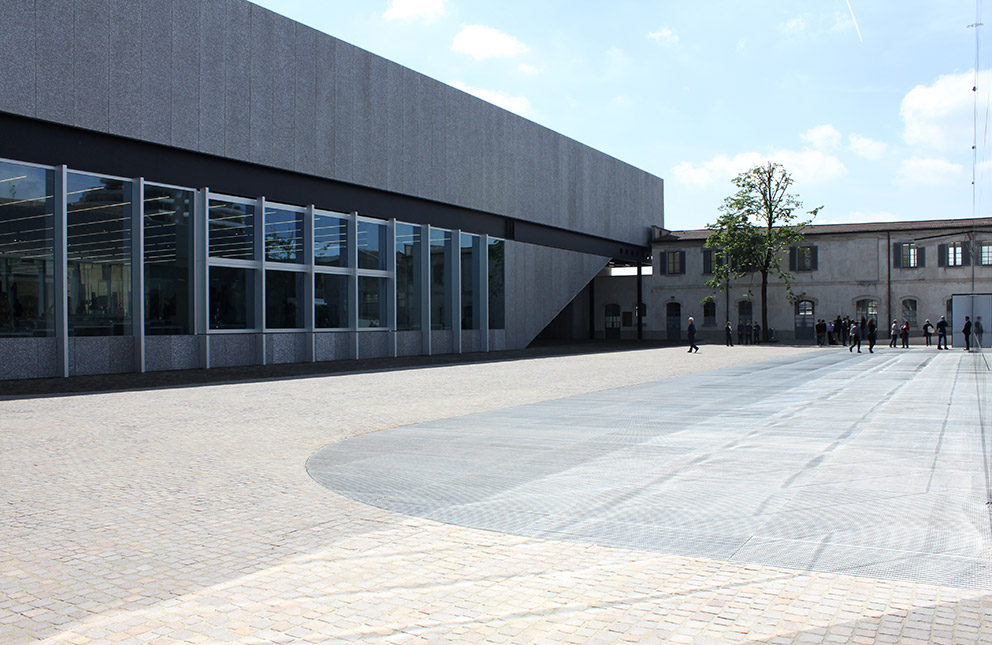 The largest space of the Fondazione Prada is between the new, silver exhibition building and the mirrored cinema. Photo © Adeline Seidel, Stylepark 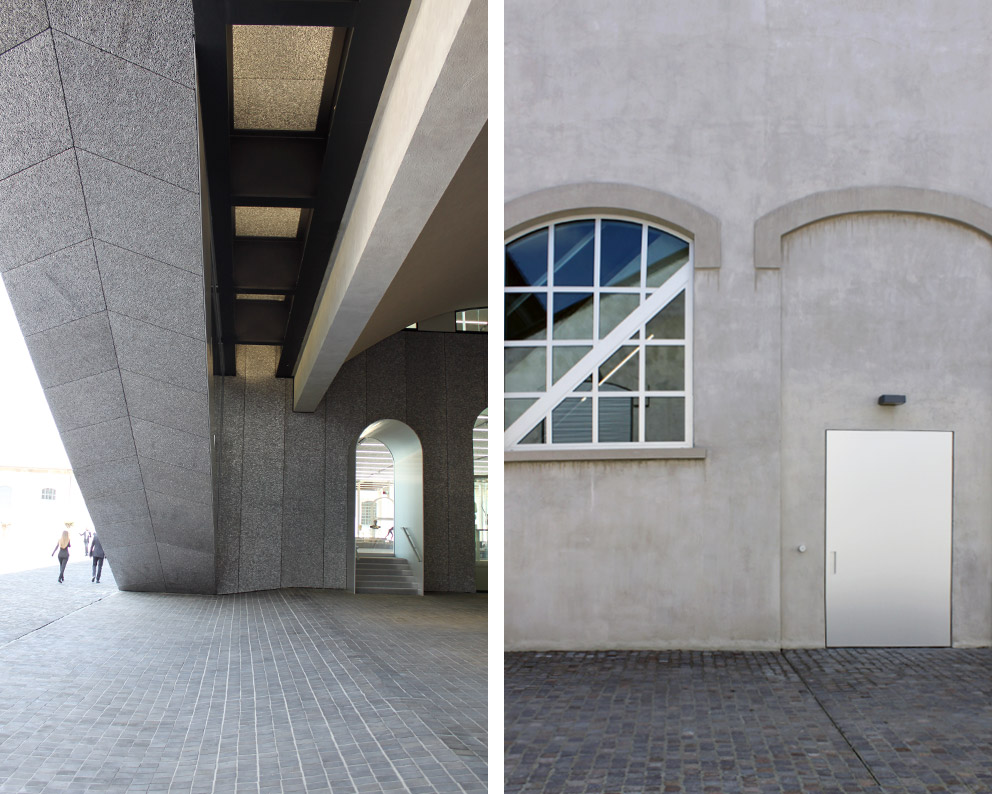 The arched windows of the old building are quoted in the new exhibition space - and also the bottom view of the staircase has OMA not left to pragmatism. Everywhere on the site you will find this actually almost lovingly designed details. Photos © Adeline Seidel, Stylepark 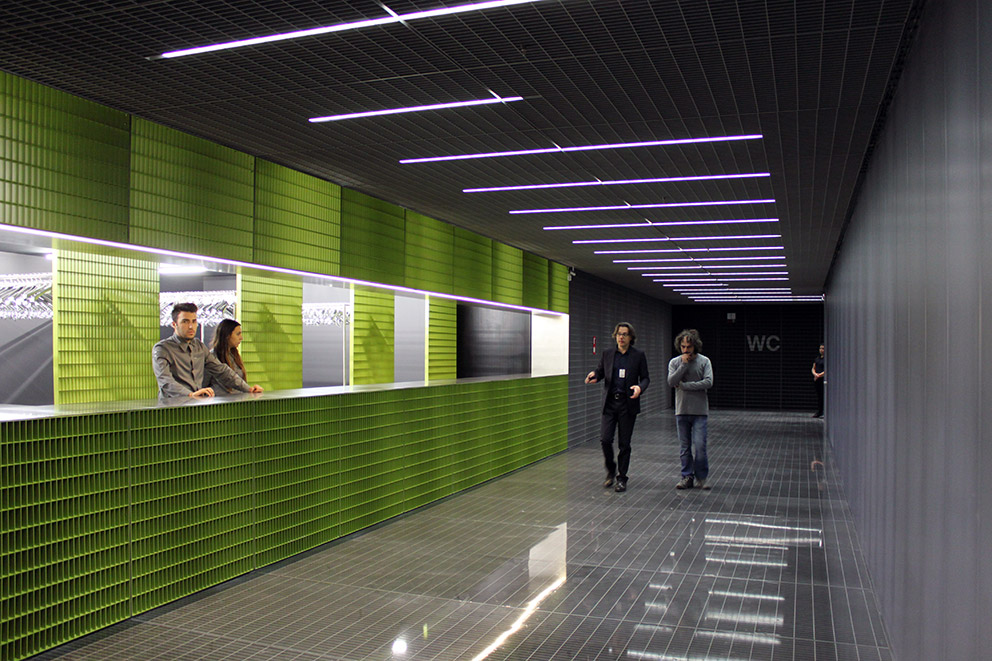 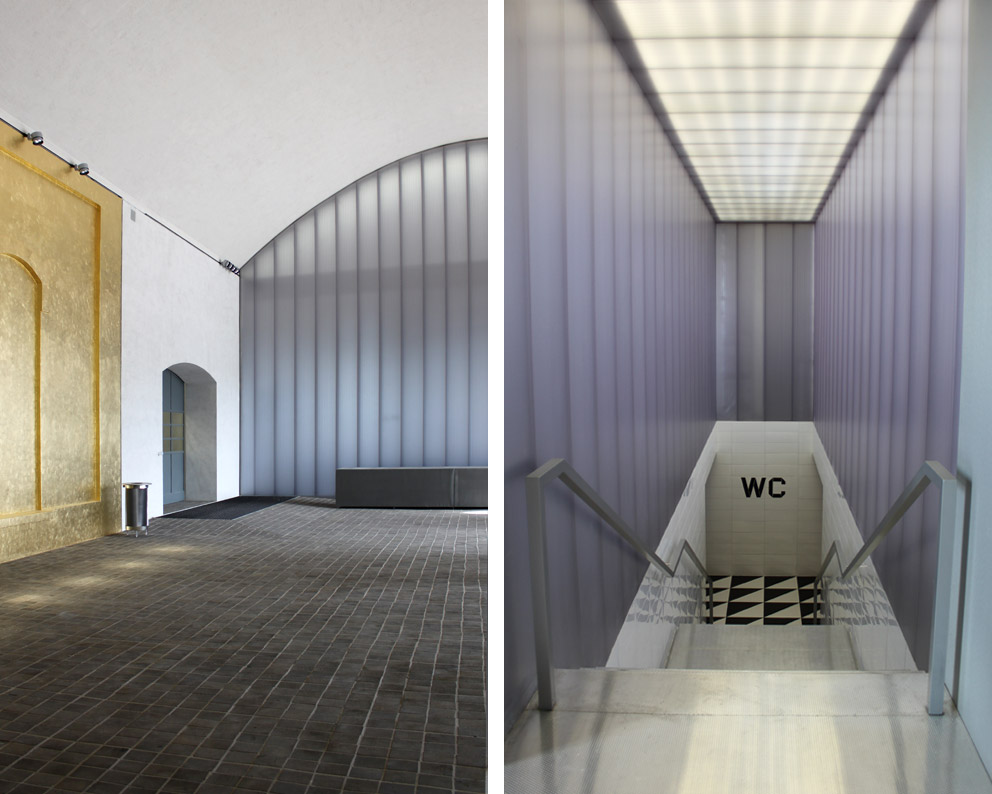 The flair for collage, contrast, coalitions and overlaps is something to be seen not just in the spaces and volumes, as it is also in evidence in the rich seam of materials used.
Photo © Adeline Seidel, Stylepark 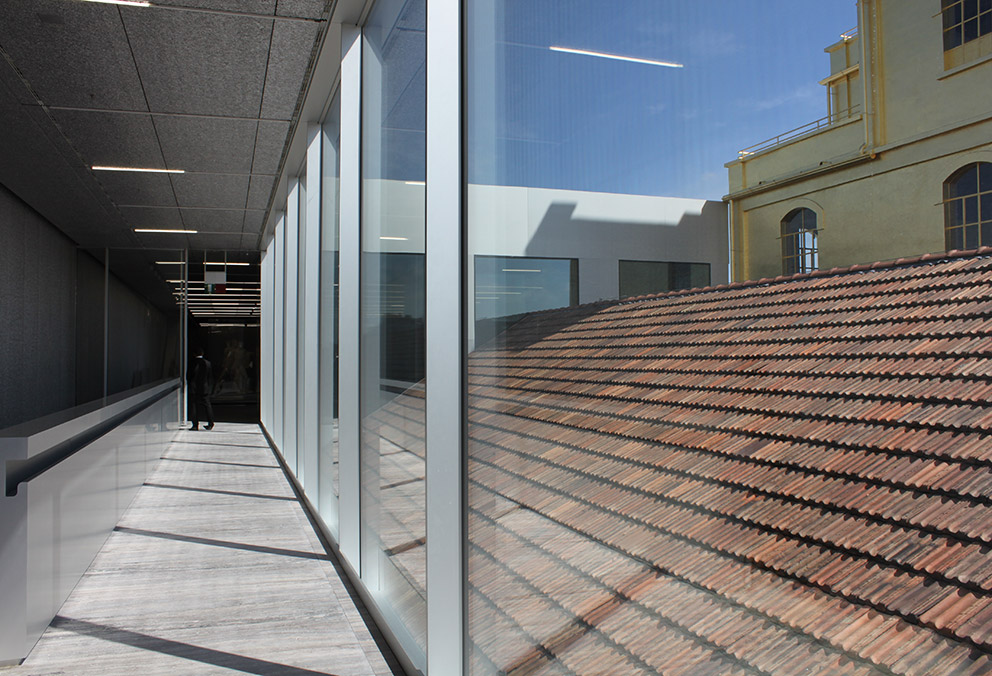 The new architecture interconnects with the existing buildings, overlaps and blends with them. Photo © Adeline Seidel, Stylepark 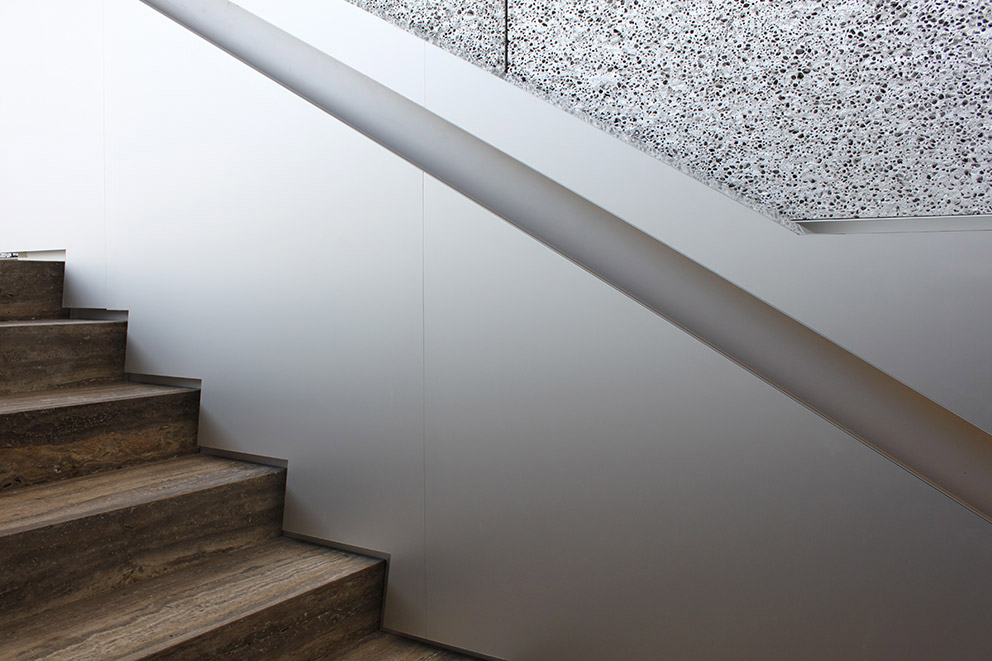 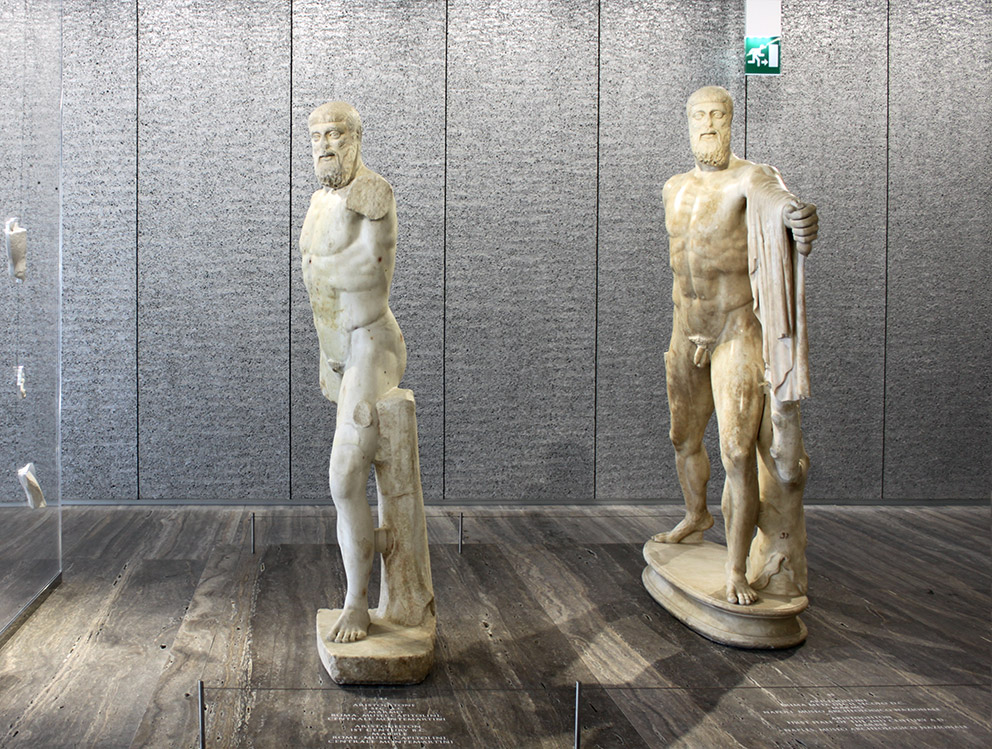 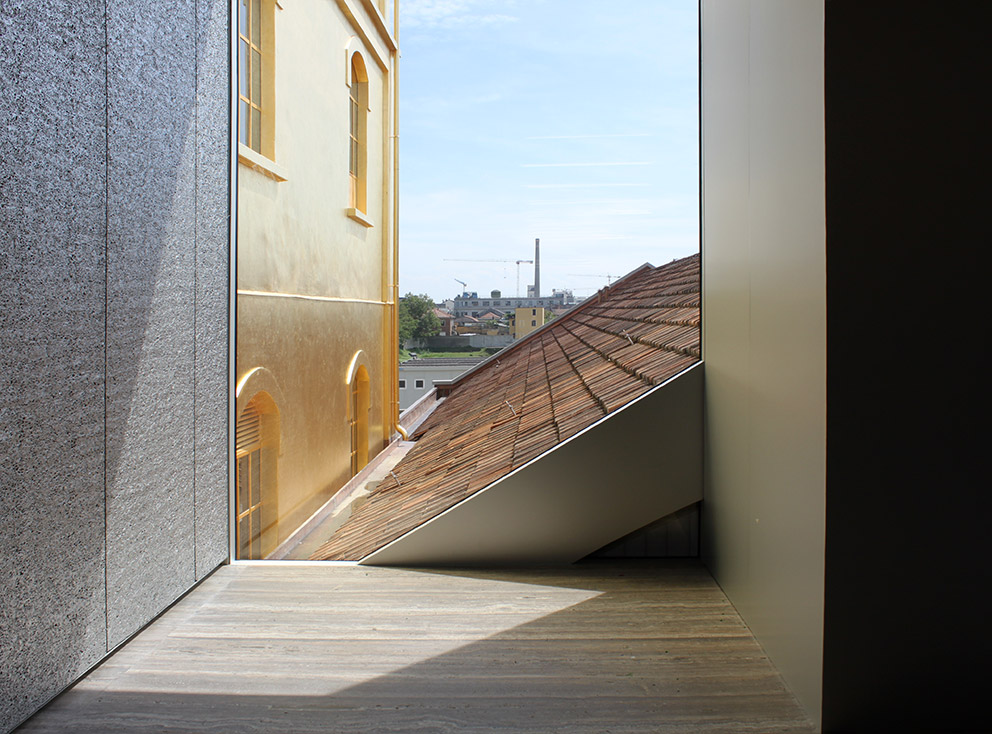 Here and there the exhibition spaces provide a view to the urban realm. Photo © Adeline Seidel, Stylepark 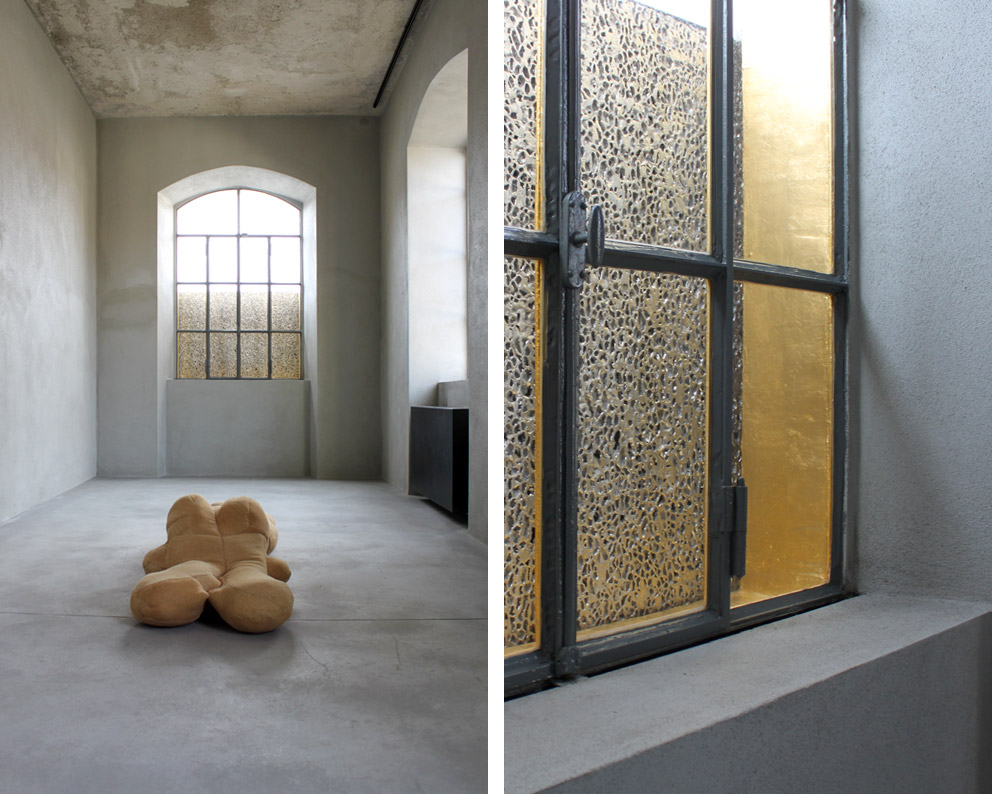 The Golden House is only approved for private events as it does not fulfil the fire protection requirements. Photos © Adeline Seidel, Stylepark 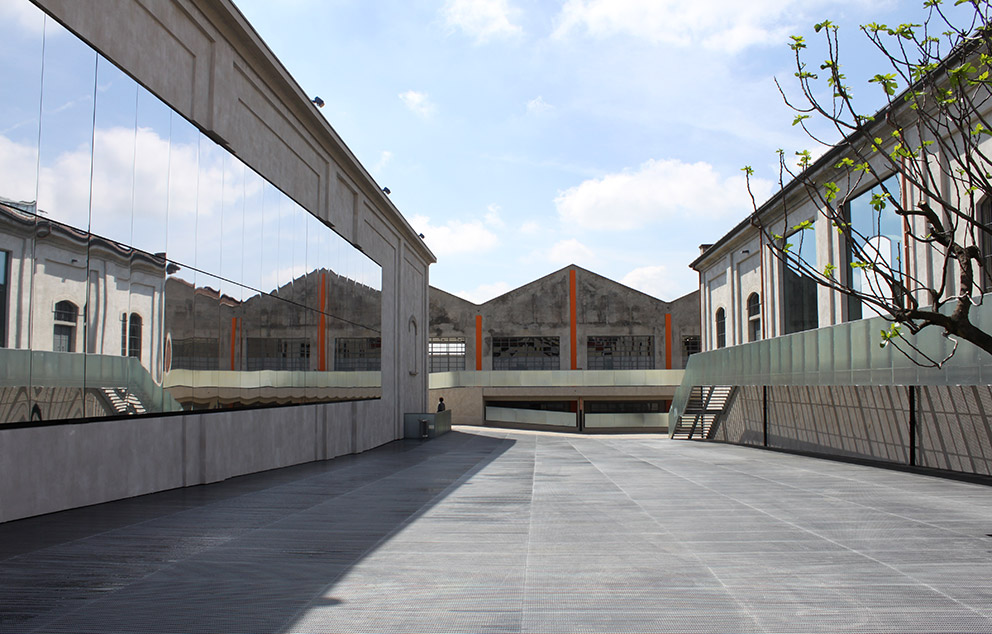 The area of the Fondazione Prada must be explored. Otherwise, you might overlook an entrance to an exhibition space. As the stairs to the left, one might consider - incorrectly – as a basement access. Photo © Adeline Seidel, Stylepark 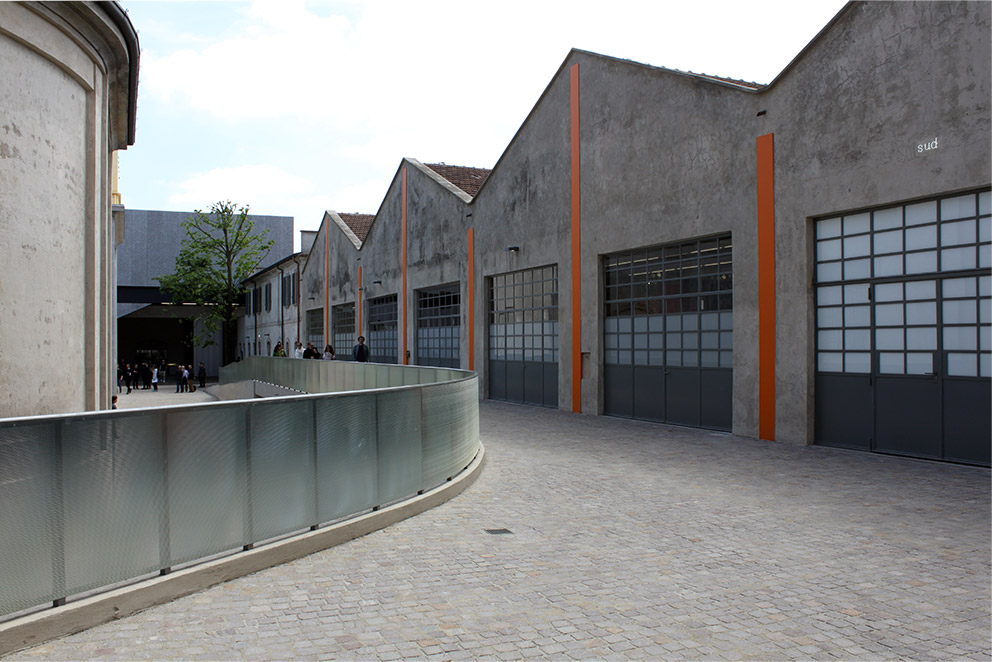 Everything seems almost the same here, but each room behind the gates is different. Photo © Adeline Seidel, Stylepark 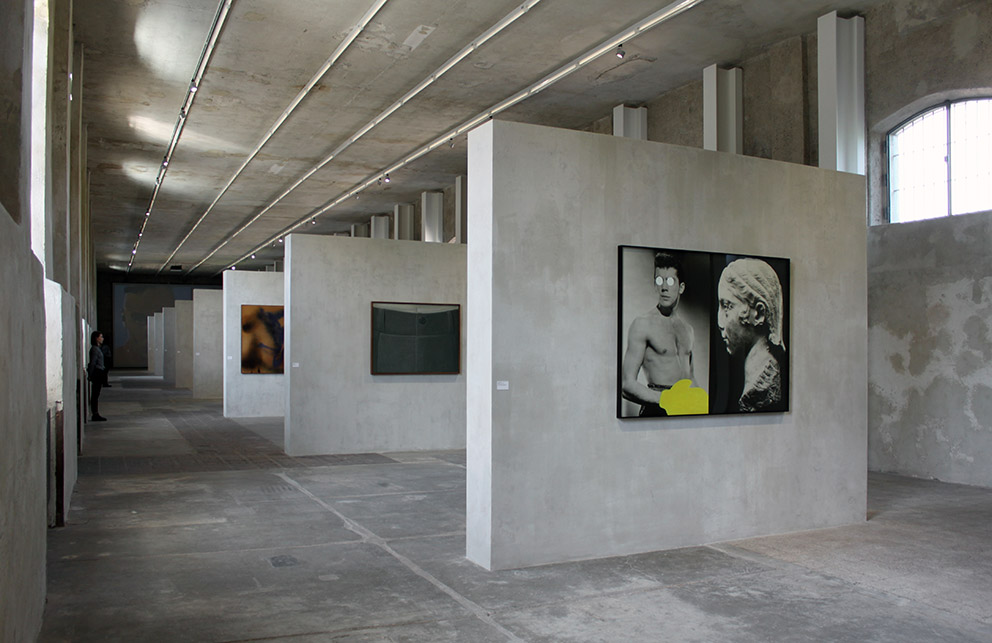 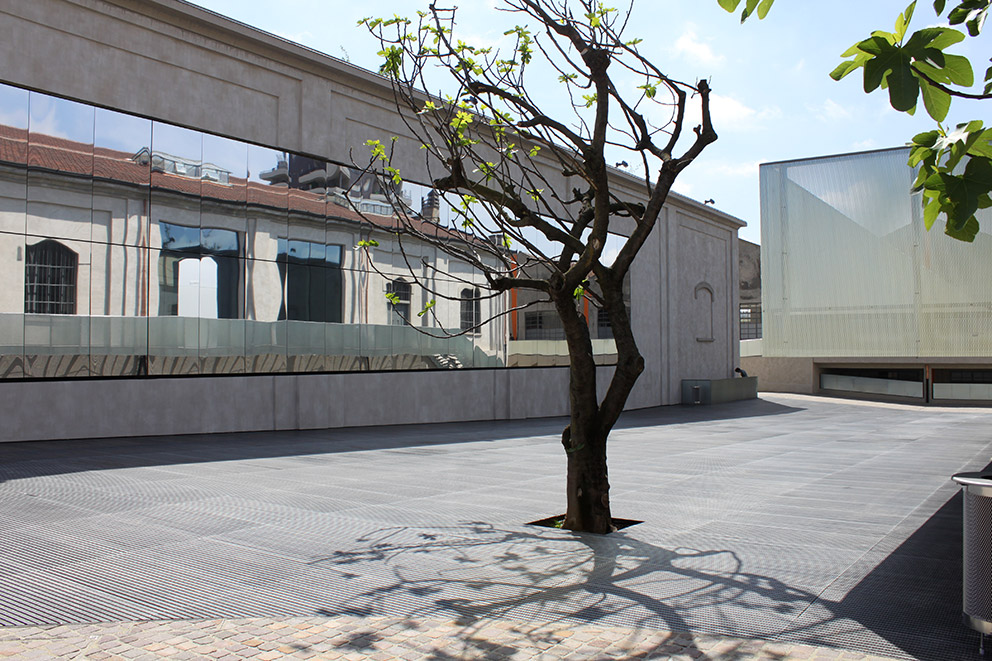 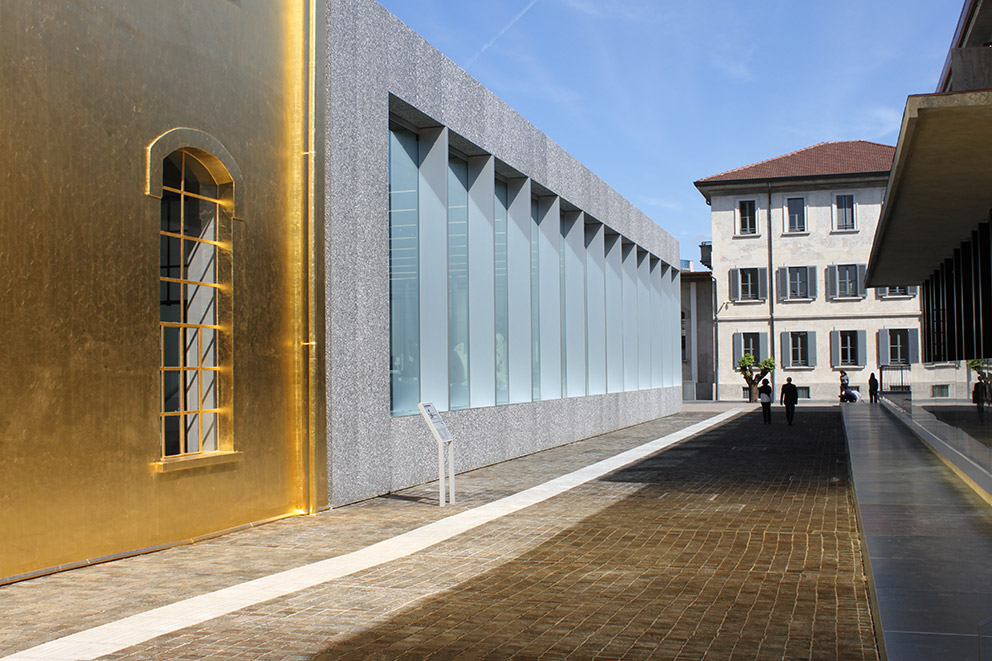 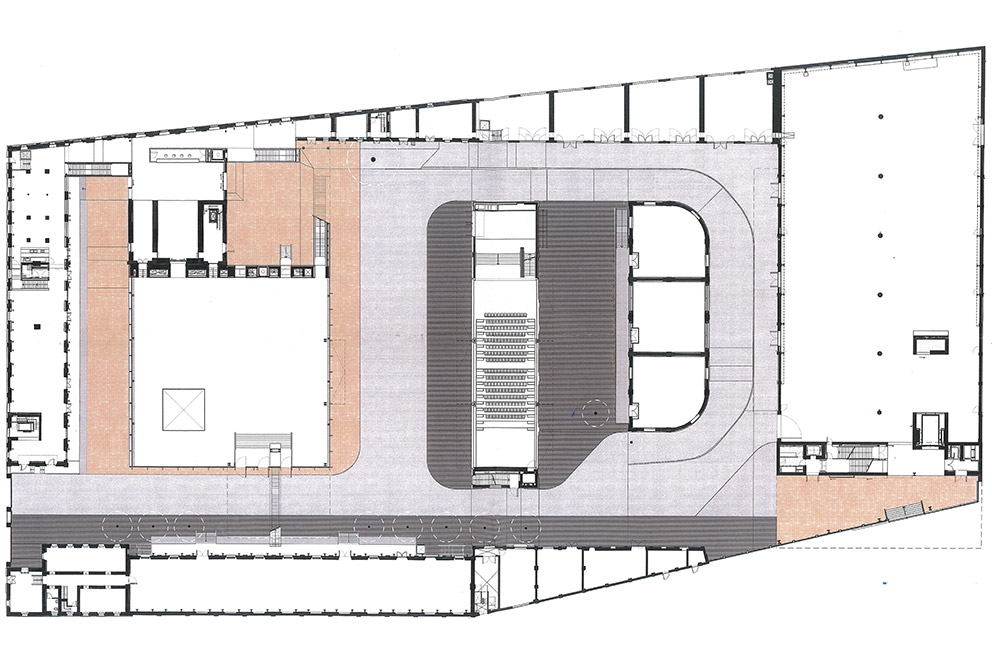