A new era began with the construction of the Eiffel Tower in Paris in the late 19th century. And thanks to new industrial production methods as well, iron and steel started to find their way into architects’ plans. Complex and spectacular structures were now possible. With the tubular steel furniture of the 1920s and 1930s, the culture of industrialization also reached the living room. After World War II, metal returned to furniture design in a different form, with Charles and Ray Eames leading this field, too. They developed production methods in which steel wire could be bent and welded in order to make delicate yet stable constructions. Now, four feet or solid base frames gave way to structures that seemed merely intimated, as it were. A further advantage was that furniture made from chrome-plated wire could also be used outdoors.

It is the iron wire frames for the “Plastic Chair DSW” (including the so-called “Eiffeltower Base”), for the “Wire Chairs DKR” and tables “LTR” and “ETR” by Charles and Ray Eames as well as the chairs and armchairs by Harry Bertoia that were developed in the early 1950s in cooperation with manufacturer Herman Miller which best symbolize this “wire period”. Metal wire as a material in furniture design became a defining element of midcentury design. Today, wire is more relevant than ever, particularly where designers seek to give both large and small tables a frame that is both stable and delicate.(mm) 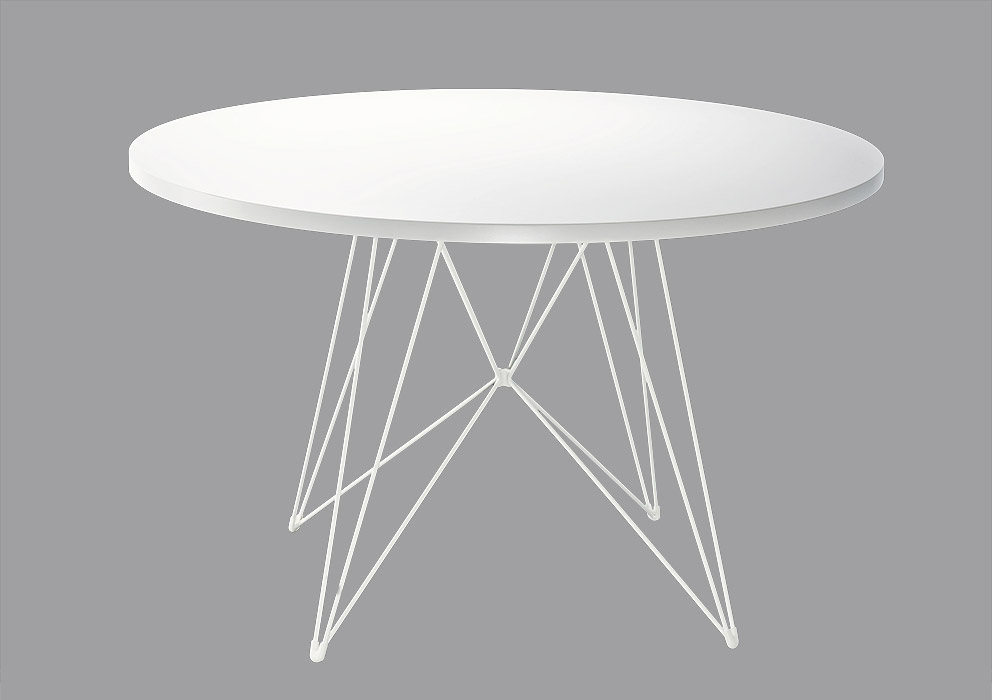 GOES WITH ANYTHING
“TAVOLO XZ3” BY STUDIO TECNICO FOR MAGIS

No matter which chairs you combine it with, the “XZ3” designed by Studio Tecnico for Magis in 2003 is extremely popular. It is available with a circular (120-cm diameter) or rectangular MDF top (200 x 90 cm) and a round steel frame either with an epoxy coating or chrome plated. In any case it goes with anything – for example the Eames’ “Plastic Chair DSW” with its metal-wire frame, which it was above all conceived to buddy with. 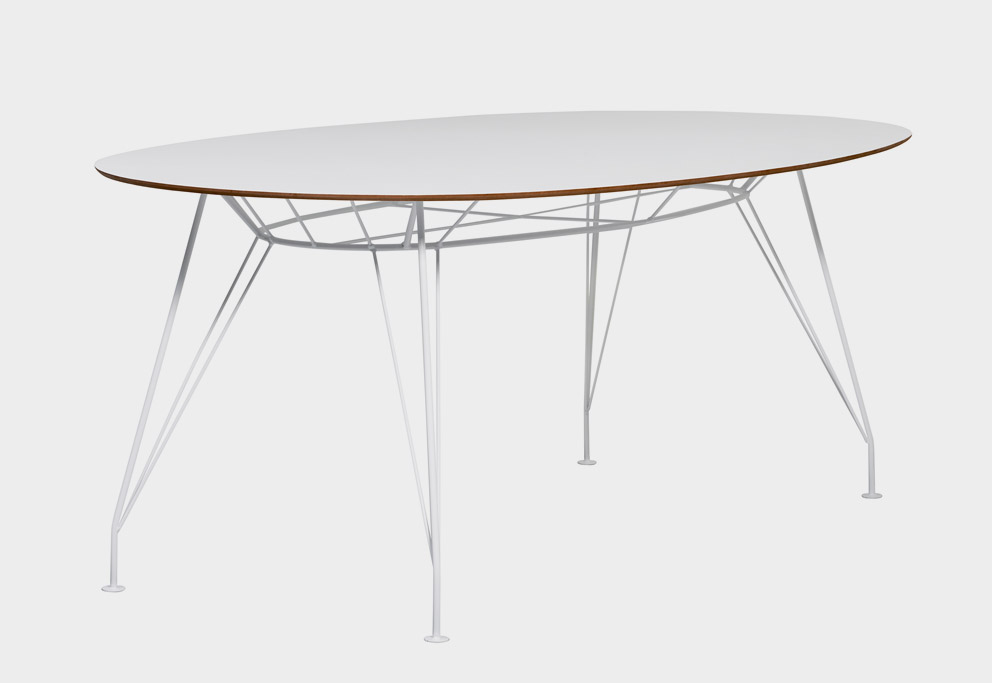 LIGHT AND FEMININE
“DESIRÉE” BY YNGVE EKSTRÖM FOR SWEDESE

Still contemporary: Yngve Ekström designed this garden table in 1954 to match his chair “Desirée”. It boasts an impressive steel-wire frame from which the legs radiate out, as with the eponymous chair, whereby the table is considerably more reserved. With its rounded laminate top and the frame lacquered white, it seems light and somewhat feminine. Simply “Desirée”. 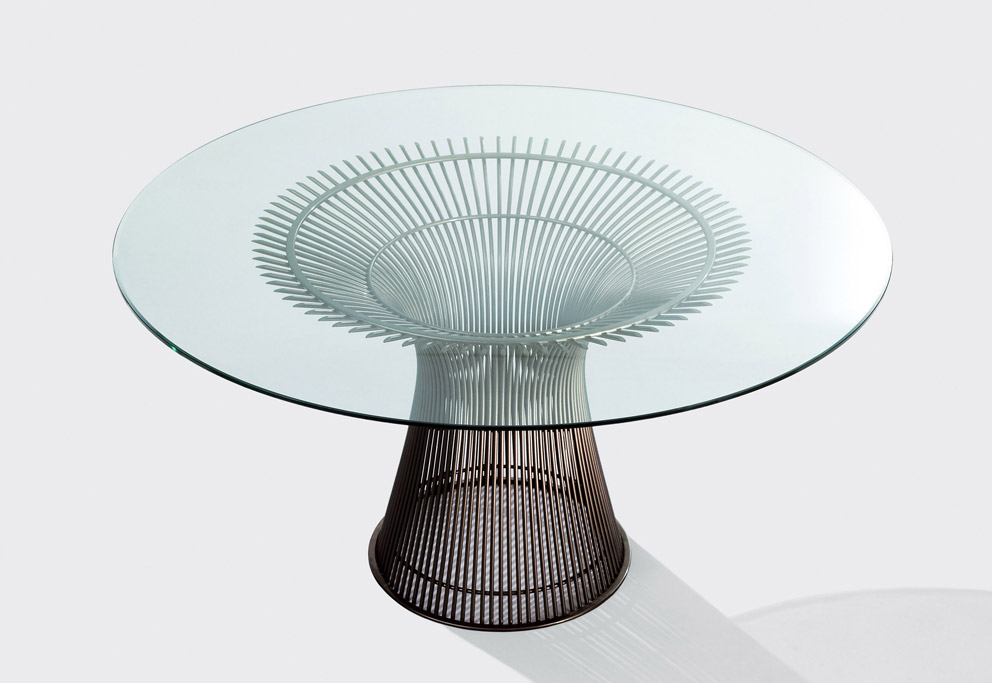 A WHEATSHEAF
“PLATNER TISCH” BY WARREN PLATNER FOR KNOLL

“I, as a designer, felt there was room for the kind of decorative, gentle, graceful kind of design that appeared in period styles like Louis XV, but it could have a more rational base instead of being applied decoration,” stated Warren Platner on presenting his armchairs and tables in 1966. Their striking feature is a series of thin, nickel-plated steel rods that splay out at the top like a “wheatsheaf”. For this to be seen, a glass tabletop is a must. For the “Platner” collection, which he designed together with the Knoll design team, the designer and architect also developed the production methods. 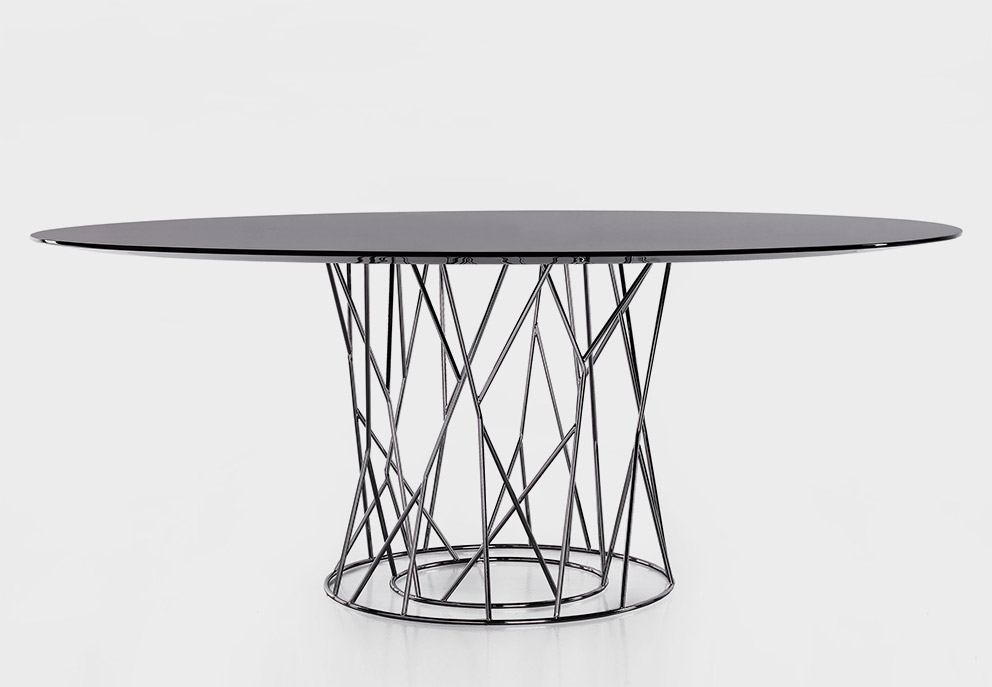 TWO BECOME ONE
„SYNAPSIS“ BY JEAN-MARIE MASSAUD FOR PORRO

At birth, a child has around 100 billion nerve cells, which are connected by 50 trillion synapses. In its first few months of life, this number multiplies 20-fold to 1,000 trillion. So it is a good thing that for his table for Porro presented in 2005, Jean-Marie Massaud focused solely on a tiny section. Instead of nerve tissue, he uses chrome-plated or white or black-painted iron rods. And in contrast to the human brain, the frame of “Synapsis” is well ventilated and consists of two counterposed conical elements. Instead of 1,000 trillion, here, two become one. 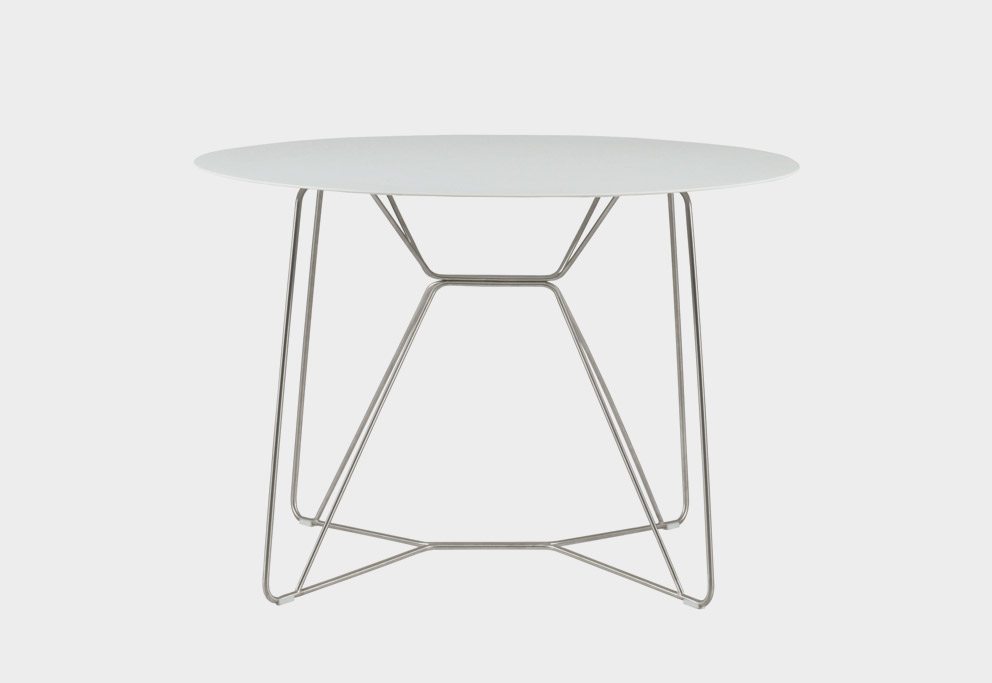 May we present: a real Austrian. Despite lavish strudel with cream and good Burgenland wine, very slim indeed. The name says it all when it comes to this table by Viteo, produced not far from the company headquarters in Graz. The wafer-thin Corian top with rounded edges is borne by a slim stainless-steel frame. There are two models available: the dining table (tabletop diameter from 64 to 130 cm) and lower lounge tables (likewise 64 to 130 cm). The matching chairs are naturally also slim. It’s up to those who sit in them to stay slim themselves. 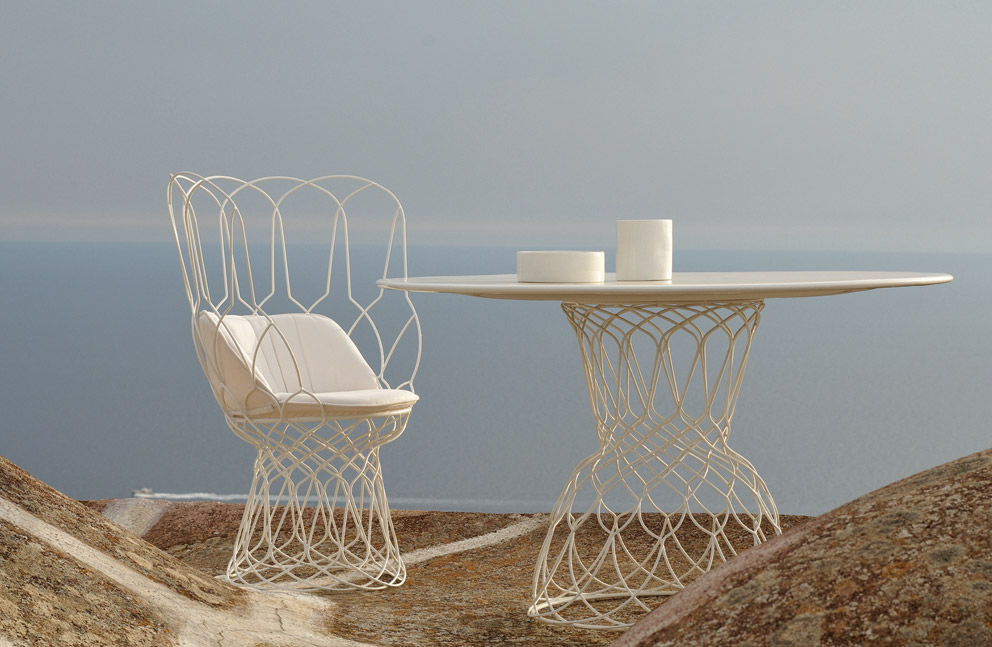 Tables and chairs in the “Re-Trouvé” line bring a touch of that Fifties feeling to the terrace, those days of the petticoats, pointed brassieres, punch and Rock ’n’ Roll. Although designer Patricia Urquiola wasn’t born until 1961, she has a knack for re-designs with a slightly ironic touch, which is why she has given the steel loops especially large and wide curves, for example. For the table with a 130-cm diameter (a smaller version with a 105-cm diameter is also available) she simply took the principle of the chair frame and turned it upside down. Ingenious. 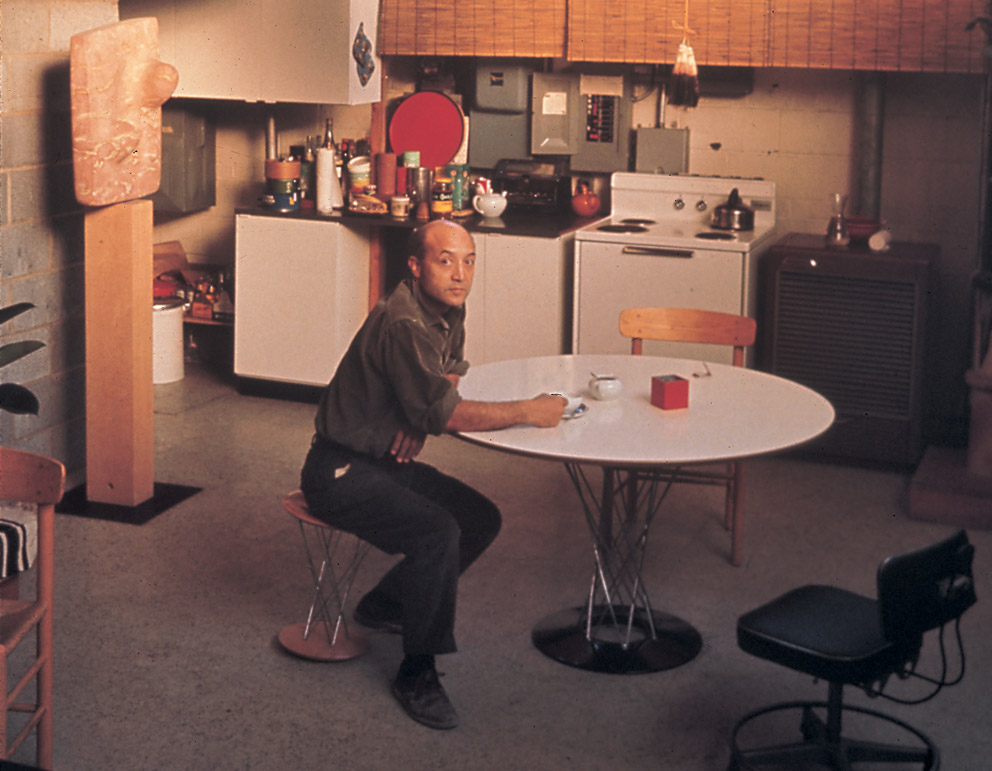 Japanese-American sculptor and designer Isamu Noguchi happened upon the idea for his “Cyclone Table” by way of the “Rocking Stool” that, inspired by African archetypes, he had shaped from metal rods and wood in 1953. On Hans Knoll’s advice, Noguchi initially further developed the stool into a children’s table, which went well with Harry Bertoia’s “Wire Collection”. Then, from 1957 a version was also made for adults’ dining rooms. In Europe the table is available from Vitra and in the United States from Knoll International in two sizes and with a white or black laminate top. The circular base is made of cast iron, the base frame of chrome-plated rods. Unlike the “Rocking Stool”, whose underside is arched, the “Cyclone” is not made to rock. 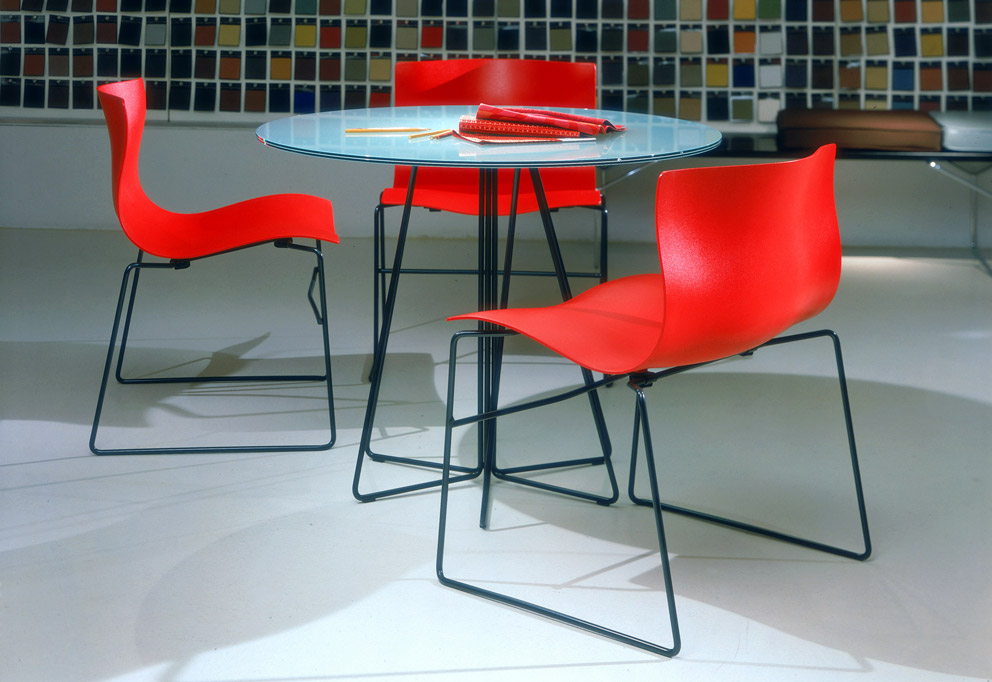 PLAYING WITH A PAPERCLIP
“PAPERCLIP” BY VIGNELLI DESIGN FOR KNOLL

The design principle is very simple: You take three steel-wire rectangles opened at an angle of 30 degrees and tapering upwards, and join them in the middle – and Hey Presto you’ve got a six-legged frame. Admittedly, a paperclip doesn’t function quite like that, but has a similar appearance in parts. Massimo and Lella Vignelli designed the “Paperclip” table in 1993 to go with their “Handkerchief Chairs”. 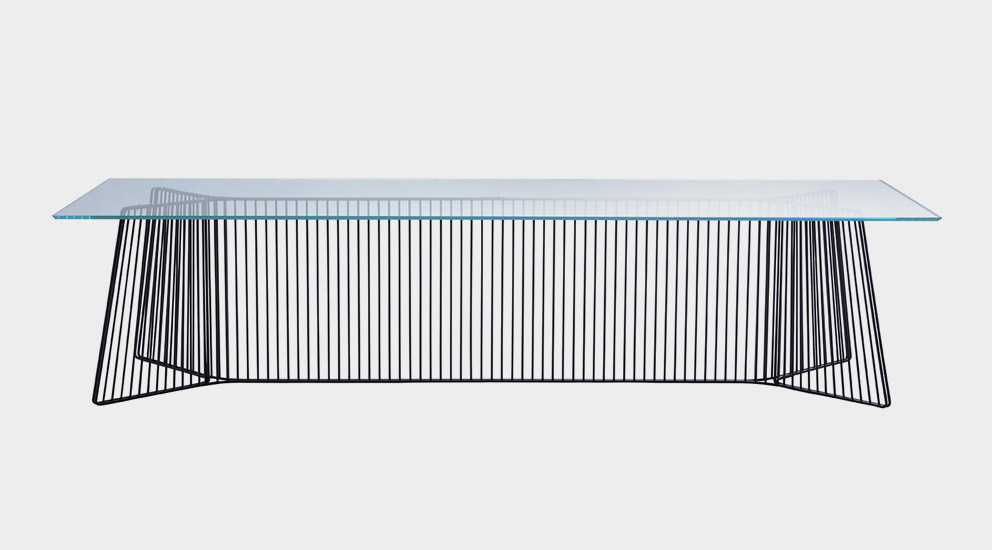 Be it wood, marble or glass, “Anapo” bears everything with dignity. The table developed by Gordon Guillaumier and presented by Driade in 2014 is arguably the most impressive in our series. The Maltese-born designer, who lives in Milan, flaunts a parade of many, many metal struts embraced by an outer frame, all of which are spot welded in perfect position. As such, the thin struts are able to support the 310-cm-long, rectangular tabletop. Customers can also opt for a shorter version (250 cm) or a round one (diameter: 108 cm). 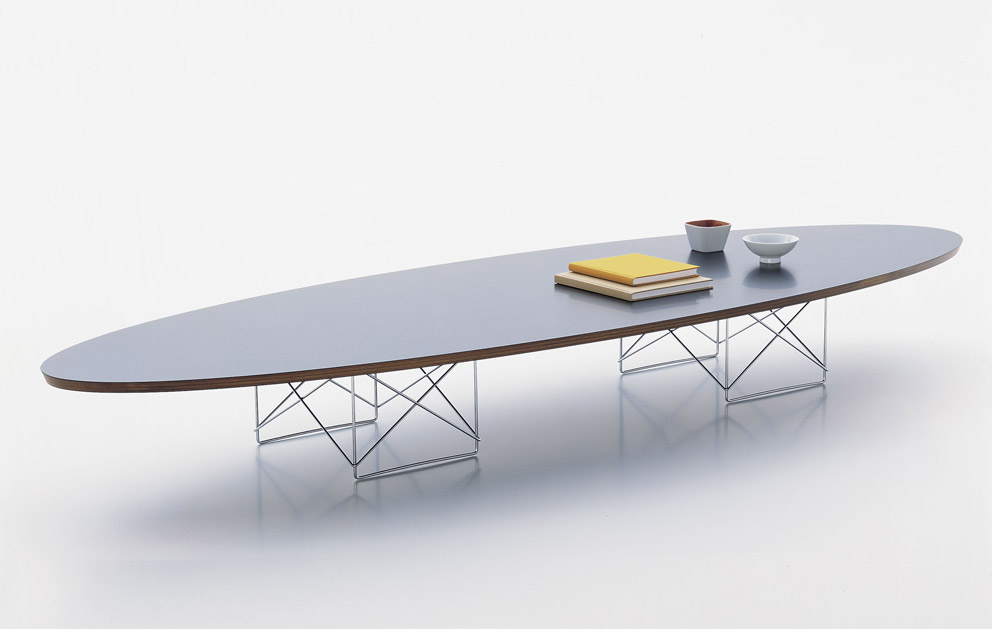 When Ray and Charles Eames designed this coffee table, they had just found out during the development process of the Plastic Chair how to weld bent metal rods in the production process and use them to make furniture. The “Occasional Table” came out in 1950, and the “Elliptical Table” the year after. It essentially consists of two Occasional Table frames linked by a tabletop that looks like a surfboard. Which is why the low coffee table is also called the “Surfboard Table”. Now all you need do is wait for the right wave. 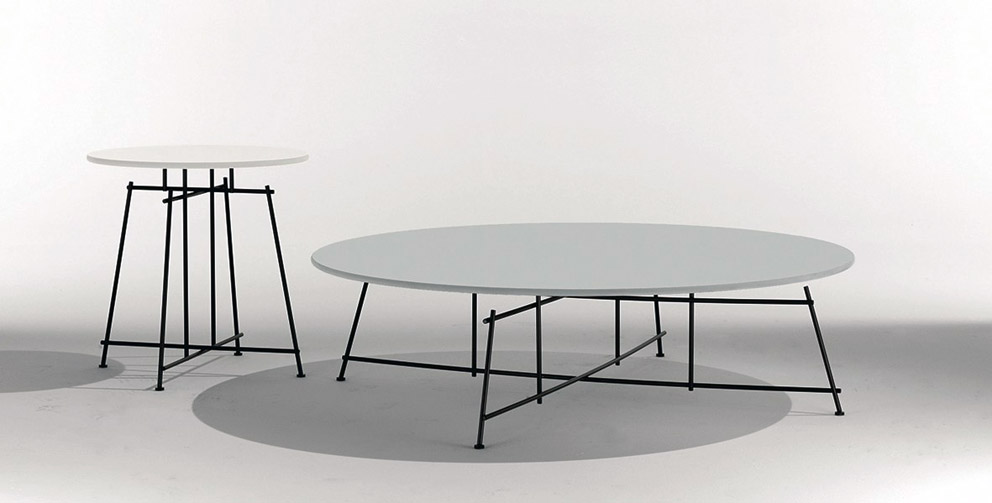 LOOKS LIKE BAMBOO
“MR. ZHENG” BY ROBERTO LAZZERONI FOR LEMA

Italy has long looked hopefully to Asia – as an important market for luxury brand products. Naturally Italian designers may well also seize the opportunity to design products in a Far-Eastern vein, as did Roberto Lazzeroni with “Mr. Zheng”. The 10-mm-thick steel rods are not bent, but welded together such that they take on the appearance of thin bamboo poles tied together. Given that the supports bearing the tabletop are located at the center of the structure, the top seems to float above the frame. 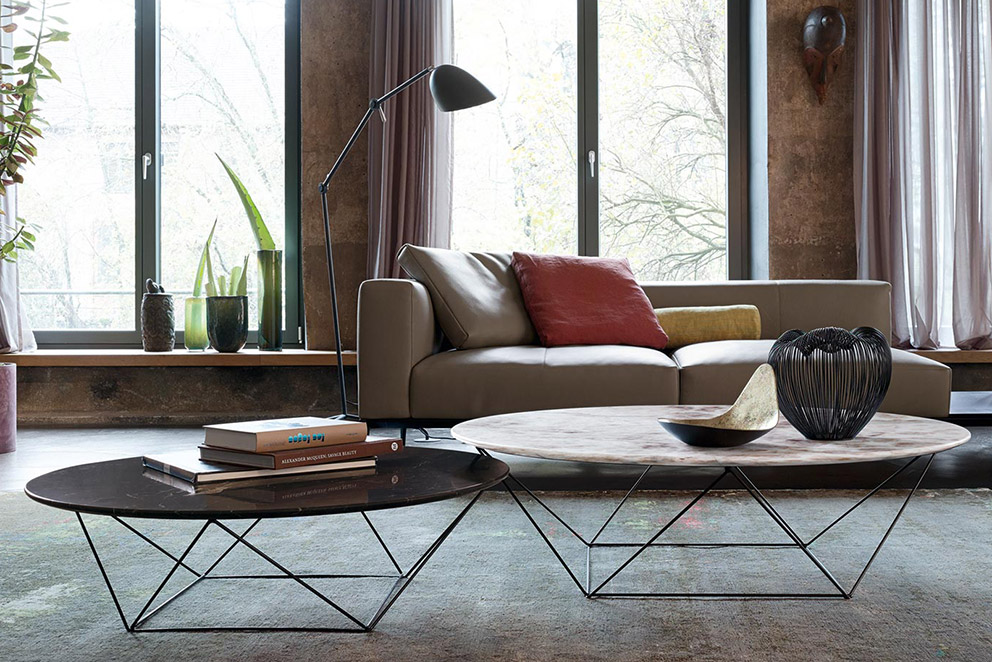 SQUARE ON SQUARE
“JOCO STONE” BY EOOS FOR WALTER KNOLL

Joco’s powder-coated steel frame is based on a playful approach to geometry: You take a square, place a second, larger square above it rotated at an angle of 45 degrees to the first, and connect the corner points. Yet that doesn’t have to interest you as a user of course. As you can simply enjoy the look of the table, which is available in a number of different versions, all of them past masters in the art of making what is light look light and what is heavy look just that. Those who appreciate elegance can choose between marble and onyx marble for the top, on which to then place their cocktail flutes. 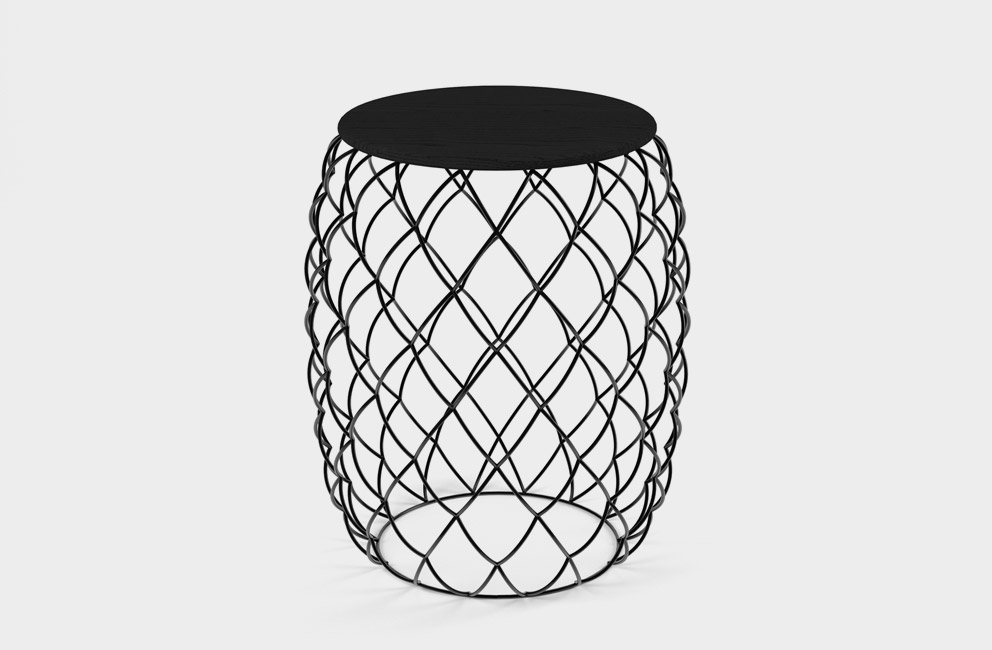 LADIES AND GENTLEMEN, THE PINEAPPLE!
“PIÑA” BY JAIME HAYON FOR MAGIS

Is it a table? Is it a stool? Or is it actually a pineapple? Whoever casts a glance at Jaime Hayon’s design sketches for his “Piña” series for Magis will quickly see that the smart Spaniard did indeed draw inspiration from the outer structure of a pineapple for the typical honeycombs made of epoxy-coated steel wire. Which is far more obvious from the coffee table than the chairs from the same collection. The table was launched in 2014 and thus three years after the premiere of “Piña”. Pineapple for dessert, anyone? 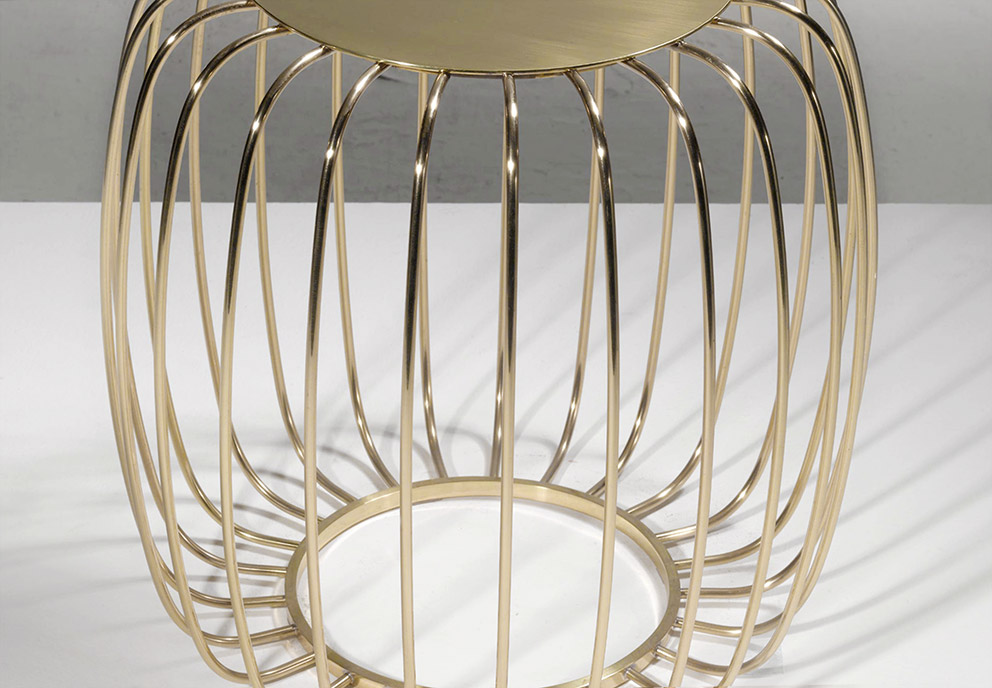 A pumpkin is also an attractive fruit. Seyhan Özdemir and Sefer Çağlar of Turkey’s Autoban design studio examined its structure in more detail. The result: this small coffee table produced and sold by De La Espada and available in stainless steel, color coated or even with 24-carat gold-plating. How nice that a pumpkin can be so highly refined. 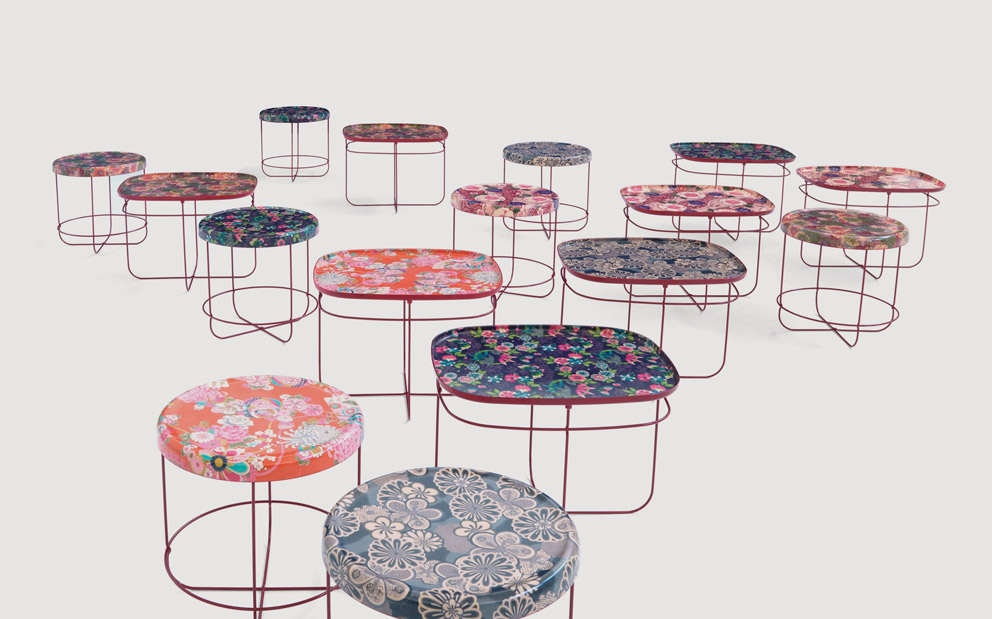 ENJOY THE MOMENT
“UKIYO” BY TOMITA KAZUHIKO FOR MOROSO

In Japan, “ukiyo” refers to a painting style developed in the Edo period concerned with the transient earthly world. Katsushika Hokusai, with his landscapes, is one of the most important representatives of this period. When someone talks about ukiyo, they are also talking about “enjoying the moment”. Regarding the table, Tomita Kazuhiko selected various kimono fabrics and pressed them in polyester resin, enabling them to serve as trays on a very lightweight metal-wire frame. Pretty Japanese. 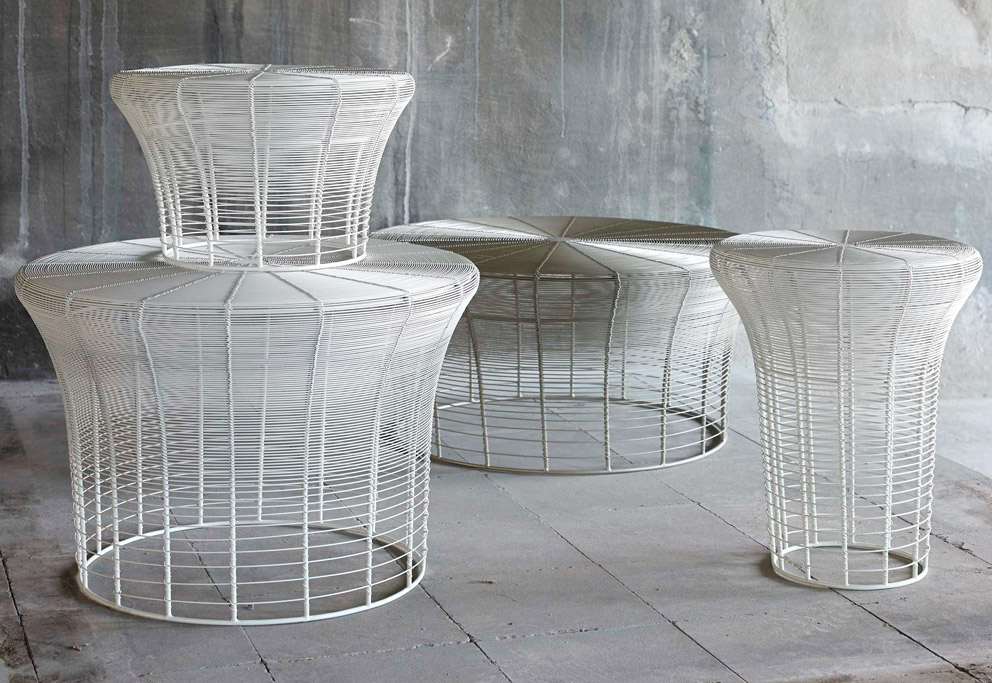 Oki Sato alias Nendo can not only speak Japanese-cosmopolitan, but also Indian. As we can see from this outdoor furniture group “Aram” for Spanish manufacturer Gandia Blasco. The two stools and two tables are handmade according to the Indian tradition – using galvanized stainless-steel wire. Nendo explains thus: “The spaces between the wires gradually get larger, producing an effect like gradation.” 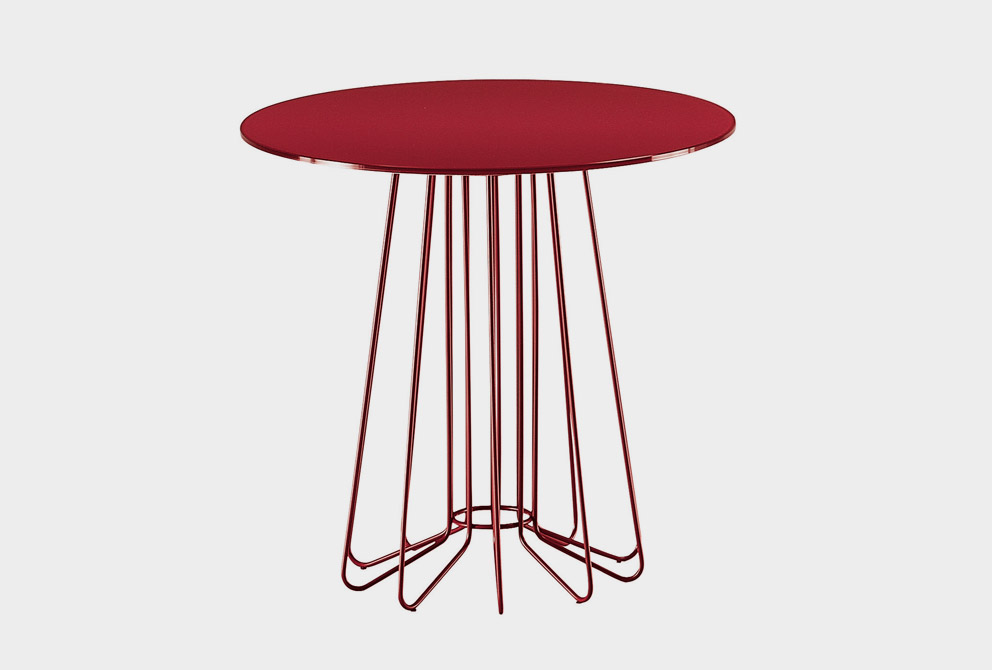 The slightly tapering metal-wire arrangement of the coffee table “Smallwire” gives rise to many associations: Some think of the frame of an opening umbrella, others of a jellyfish with its tentacles, others again of a shuttlecock. Whatever you think of, “Smallwire”, designed by Arik Levy in 2007 for Zanotta – it boasts a 8-mm-thick, painted top made of safety glass – cuts a fine figure both inside the apartment and on the terrace. On top of which, it does not take up much space, either. 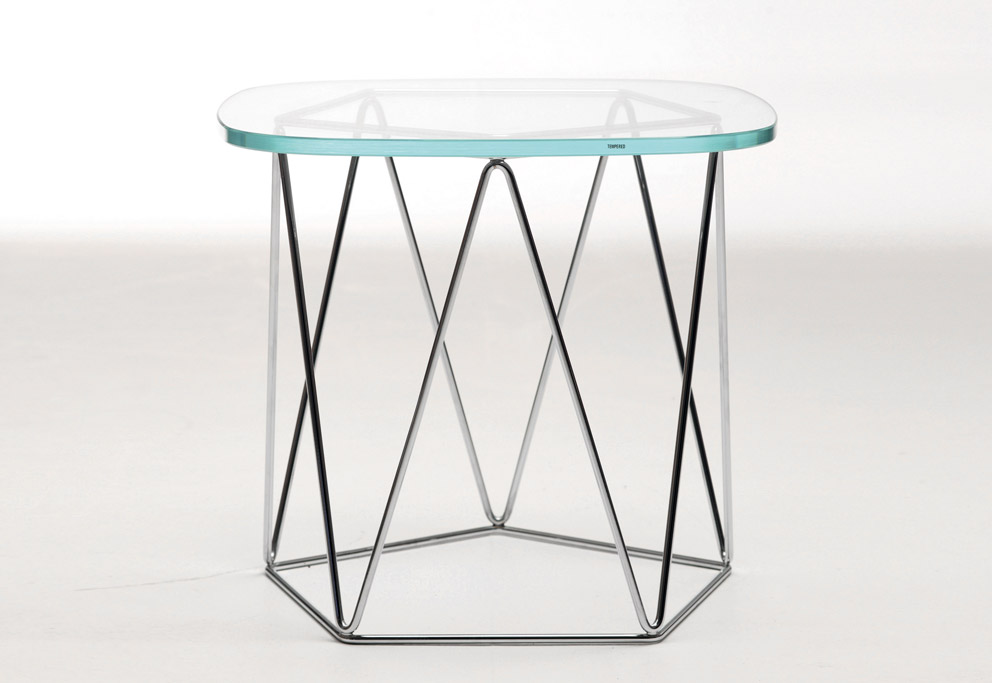 FIVE IS THE MAGIC NUMBER
“LEROS” BY PHILIPPE BESTENHEIDER FOR FRAG

Philippe Bestenheider frequently uses techy architectural forms. For his table “Leros” for Italian manufacturer Frag, which is also available as a dining table based on the same principle with a rectangular and a round top, he uses two offset pentagons, connected by means of metal loops. The result is a complex spatial mesh of lines. Almost like a mini circus act. 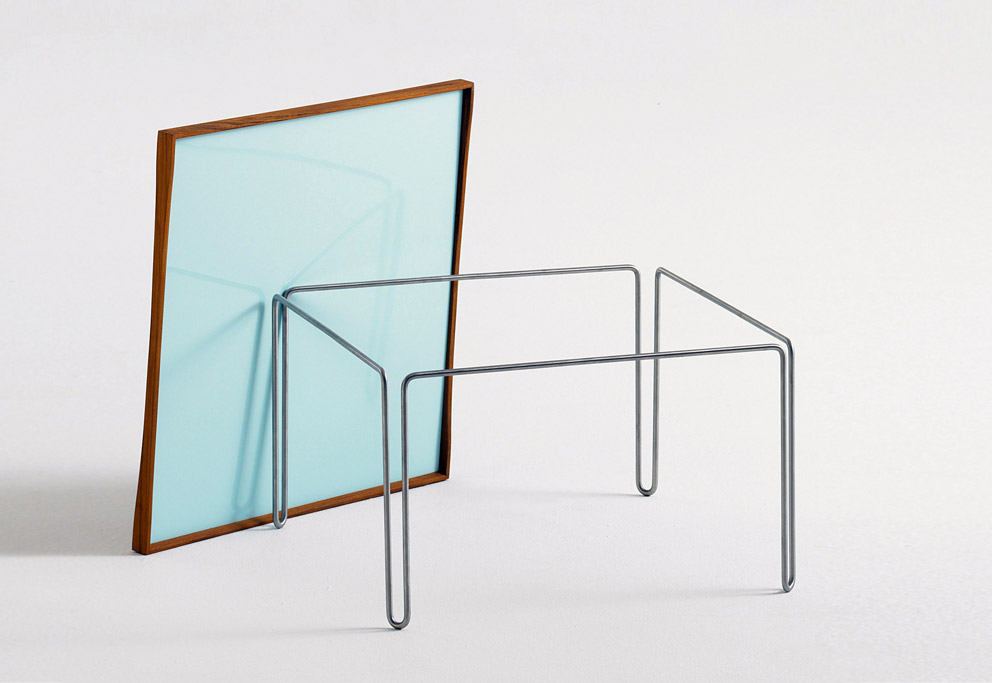 “Tray Table” by Finn Juhl likewise plays with the idea of the tray resting atop it: The tabletop with its raised edge can be taken off and flipped over. Customers can choose between laminate coating or white paint for the panel inside the solid wood rim. The slim base-frame is made of brushed stainless steel and consists of a single piece, with loops forming the legs. A classic since 1965. 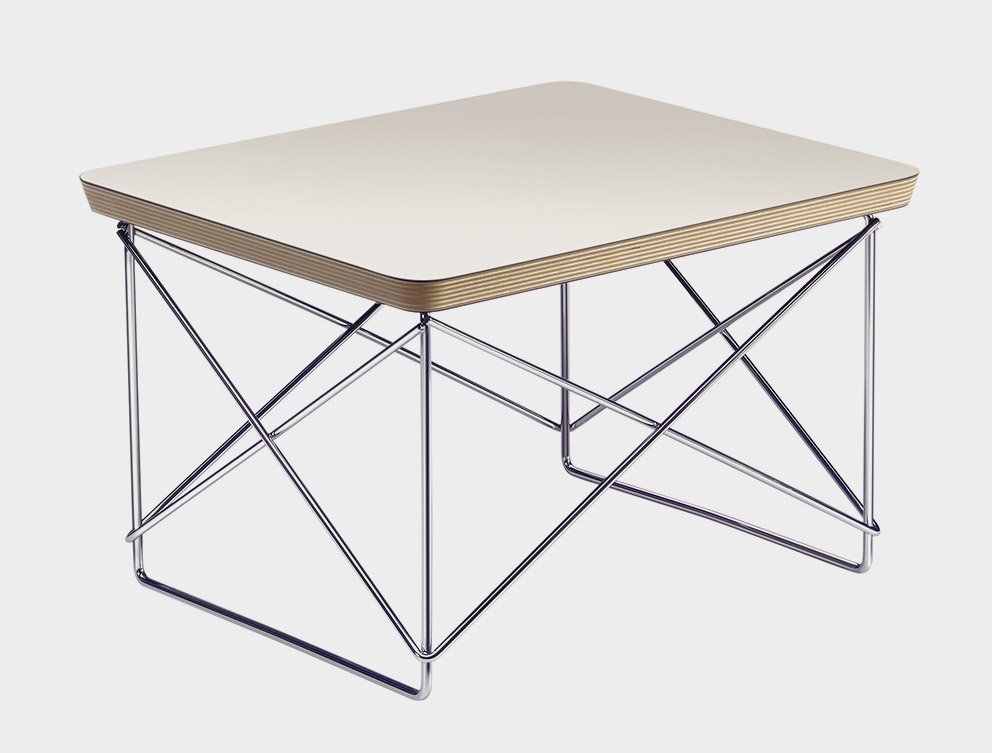 The method is well known: Cross struts lend a rectangle the necessary stability. Charles and Ray Eames refined the principle with their small “Occasional Table” from 1950, a true all-rounder, and realized their design with nickel-plated iron rods. The 25-cm-high coffee table supports a tabletop made of multiplex wood, with edges beveled at an angle of 20 degrees, which underlines the layered structure. A classic, even for the smallest of spaces.