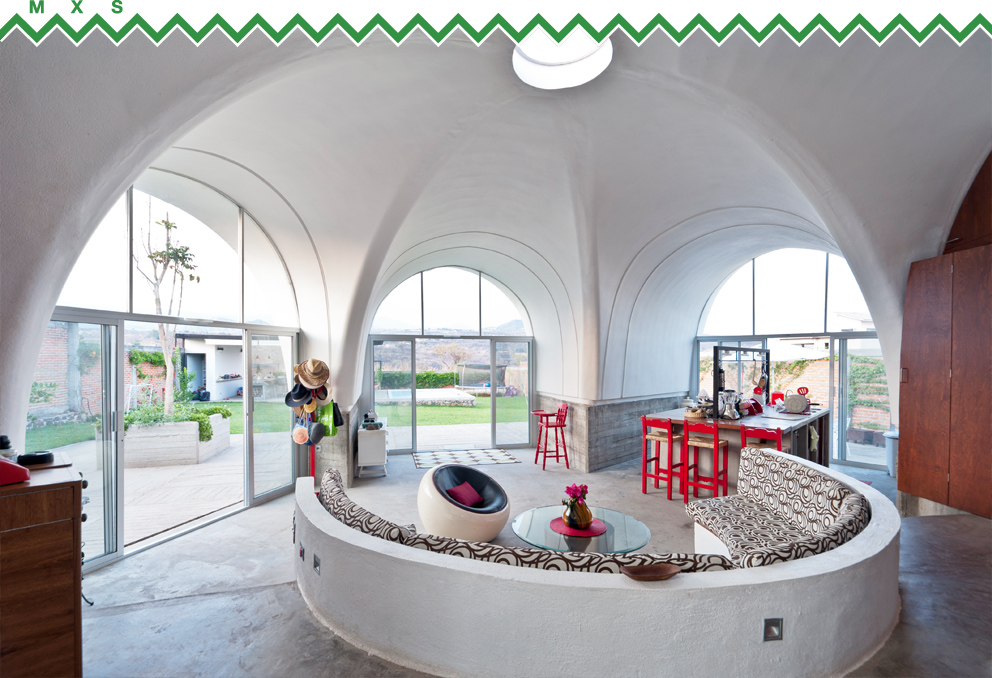 The clients inherit the weekend home of their childhood and asked the architects Productora to rearrange the fiberglass shells construction as “Casa Tlayacapan” on another site. Photo © Productora, Luis Gallardo

“Casa in Tlayacapan” by young architect’s office “Productora” can definitely be said to reflect Mexican architectural history. After all, the individual parts come from the prototype of a modular house developed in the late 1960s by Mexican architect Diaz Infante. For the owners this prototype was a place full of memories; it was here they spent their weekends as children. Several years ago they inherited the prototype, and in 2012 they commissioned Productora, to reassemble the six parabolic fiberglass modules on a different plot – an hour’s drive from Mexico City. However, the owners wanted more spacious interiors, which is why the components were set on a concrete base, the texture of which forms a conscious contrast to the softness of the curved structure.

Productora was set up by Argentinean Abel Perles, the two Mexicans Carlos Bedoya and Victor Jaime and the Belgian Wonne Ickx. However, they are not only architects, but also active networkers, and in 2011 the team created the platform “LIGA– Space for Architecture”. They see it as an international space for discussions about Latin-American architecture, design and urban planning. Today, the platform is well-established, hosts various events, curates exhibitions and conceives publications.

Pragmatic considerations, such as those that led to the Liga’s foundation, were also behind the “Biblioteca Móvil A47” mobile library created for the “Fundación Alumnos 47” foundation, which is dedicated to communicating art and culture. Rather than realize another building for cultural events, Productora developed a mobile space in a truck which can be driven to the city’s districts and houses a library while also providing space for readings and workshops.
The flatbed of the Freightliner M2 20K is 20 square meters in size and consists of several platforms the height of which can be set individually and can either form steps for an auditorium or serve as a reading room in combination with additional tables and chairs. The 1,200 books on contemporary art are stored at head-height in boxes on castors. The wall panels beneath the shelves are made of translucent metal and can also open outwards like window shutters, making the rolling library part of the public urban space.

Arabic patterns and a town house

Classic architecture projects also feature among the very many jobs currently being handled by this young office. For example, the “Hookah Santa Fe” bar, for which Productora designed the interior. The bar is located on the top floor of an office building in Santa Fe, a commercial district of Mexico City. With an impressive height of eight meters, the room is divided into a main “nave” with smaller side sections that are kept separate by a delicate curtain. The geometric patterns recall Arabic architecture – be it in the form of the blue and white tiles or the wall design of walnut – and give the room a special feel.

The “Casa Mixcoac” town house in Mexico City also demonstrates the pragmatic yet leisurely view of architecture the four have. In this project only the facade of an old house facing the street was retained, the rest of it was gutted. This was the only way the architects could create the space on the narrow plot needed to meet the client’s spatial brief. At the planning stage Productora turned and swiveled a rectangular structure until they had found a solution that not only offers enough living space but also sufficient outdoor space.

With their unusual and pragmatic architecture, but also with the LIGA, the platform for communicating architecture, Productora stands for the up-and-coming Latin American architecture scene. 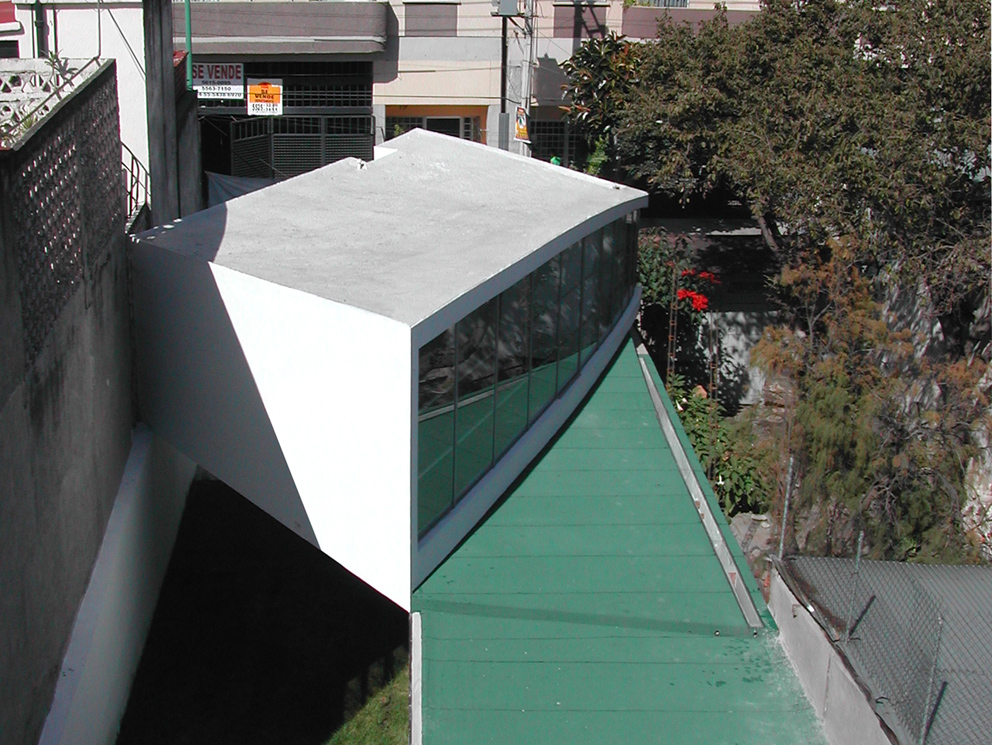 Through the building which slides over the green area of the site, the garden of the apartment building is shaded. Photo © Productora, Juan Pablo Maza

Casa Mixcoac is located in a typical neighborhood of Mexico City behind an existing street-side facade. For the narrow site Productora positioned a rectangular frame so that the house gets plenty of natural light. Photo and drawing © Productora