Anyone who can drag themselves away from the depths of the "Tvindeross bei Voss" landscape created by Johan Christian Dahl and advance to the marvelous Chipperfield building that houses the Museum Folkwang in Essen, gets catapulted directly from the 19th into the 21st century: "Hacking the City", or so the title of the experimental exhibition project, presents interventions in urban and communicative spaces. Until September 26, artists, Web designers, street artists and musicians will explore forms of public action and practiced forms of resistance. The sheer breadth of presentations ranges from photos via videos to studies of objects and events that seek to encourage discourse and here or there "co-hacking". The Ruhr region and the city of Essen itself form the locations for this artistic/critical resistance.

Thus, London-based activist Richard Reynolds has opted for a "Seed Bombing Walk" through Essen's Rüttenscheid district that references the tradition of guerilla gardening that originated in 17th-century England: Impoverished citizens took up the cry of mercer Gerrard Winstanley and planted vegetables and fruit on vacant or common land in order to feed themselves. By contrast, today Reynolds uses guerilla gardening in the battle against garbage, advertising and sealed surfaces in our cities - he organizes happenings during which abandoned patches of nature get planted, usually with flowers. In the exhibition in Essen, museum visitors can inspect a hand cart complete with the utensils needed for guerilla gardening.

Zurich Bitnik media group shows that protest has a history. The photo of an action dating from 2009, in which a sign stating "Lüge/Lie" was held up in front of the Swiss USB bank is juxtaposed to the black-and-white picture "Lügt" outside a police station, which Peter Weibel made in 1971. A repetition that describes the change in perspective of what is perceived to be the ruling class. The artists' intervention for the project "Chess for CCTV Operators" goes even further: Wandering about Essen they identified the surveillance cameras and held a chessboard up to each camera lens. The security staff therefore got to see a chessboard instead of the images they were used to monitoring - and were thus challenged to enter the game. Bitnik sees its work as an artistic intervention in an existing system in order to change its purpose - and this includes reproduction and manipulation of the media systems and live media.

In the Folkwang Museum's documentation room M+M, Marc Weis and Martin De Mattia present their 1996 piece "Autobahnschleife". A detailed engineering plan as well as a processed photo show the A27 interstate at Vittorio Veneto in Italy, where car drivers can enjoy the landscape while traveling through a 360° bend. M+M were already at hand in Essen in July with their "Call Sciopero", a car drive round the city during which they called on people to go on strike. The action is reminiscent of a sequence from the 1964 film "Il deserto rosso" in which you see a gray Fiat 500 - M+M implied that their trip was the continuation of its travels.

Boran Burchhardt focuses in his "3D § 87" project on providing medicine for people without IDs. On the reverse of signs prohibiting parking he stuck labels in 50 different languages asking the question "Ill, but no ID?". The sticker also bore a link to a contact point for people without access to the health system. Here, the emphasis was on the fact that everyone is anonymous in public space but that the anonymity gets dissolved precisely, for example, if you fall ill. Burchhardt comments that "just as the healthy data become a medical record if you are ill, so, too, the expanse of the anonymous public space becomes more confined for many as their illness progresses. Which is why I sought a place in public space where public and non-public spaces intersect. A public space that affects everyone who crosses public space and at the same time addresses those who cannot make use of that space as a matter of course."

Georg Winter's "UCS Augentrost Ambulanz" was on show on July 16-18 at the Folkwang Museum, and offered visitors suffering from visual over-stimulation an eye wash to calm their eyes and nerves - the action now lives on as a video at the entrance to the Base Station, as has his "Graffiti Restaurierung/Restoring Graffiti" or his "Aufwärmtraining für den Fäkaltanz", which offers instructions on how to clean dog shit off your shoes.

In May, during the preparations for "Hacking the City", artist Annette Wehrmann died - her documentation on "Gegn Demo/Counter Demo" made in 2005 is on display in the Projects Room. An excerpt from her drafted lecture captures the key thoughts: "The condition for a place of counter is a standstill or the failure of coordinated processes, the municipal functions: The location of counter is among others precisely that place where garbage remains lying. The location of counter is the obverse of utopia, the third dimension. It can arise at all places that are not or only provisionally defined, in all a city's nooks and crannies."

As part of the "Mapping the Region" show by the RuhrKunstMuseen and the program for RUHR.2010 European Cultural Capital, "Hacking the City" brings together two actions that were actually separate events in the 1990s. "Hacking", which is associated with the image of the computer freaks who draw their legitimation from the fact that they often bring to the surface a lack of security in our systems, is taken out into the public domain. The intention: to visualize the disturbing, irritating moment in public life. The difficulty is obviously to document such experiments, brought together in the Projects Room, the Base Station at the Folkwang Museum. Not just since Allan Kaprow do we know that such ideas may be explosive in one medium, but rarely in another or beyond the moment when they are enacted - not that this in any way detracts from their validity. For in the case of "Hacking the City", curator Sabine Maria Schmidt has opted for a consciously broad thrust that transposes such well-known forms of action as adbusting, flash mobs, cultural jamming or guerilla actions into the here and now. A courageous approach by the Folkwang Museum that definitely bears continuing - let us hope the museum takes this events and exhibition series further. 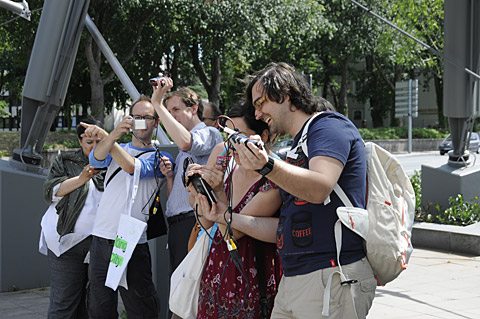 CCTV – A Trail of Images by Bitnik, photo: Patrick Presch 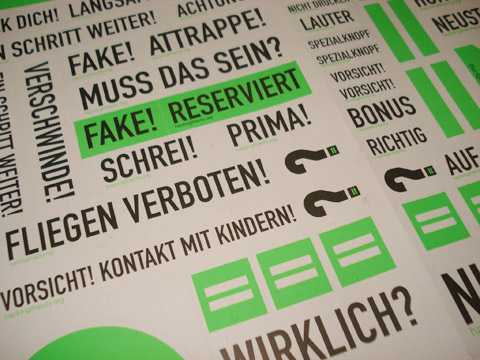 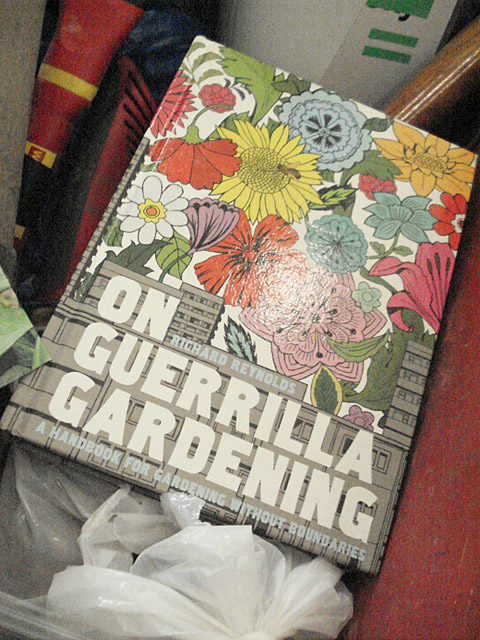 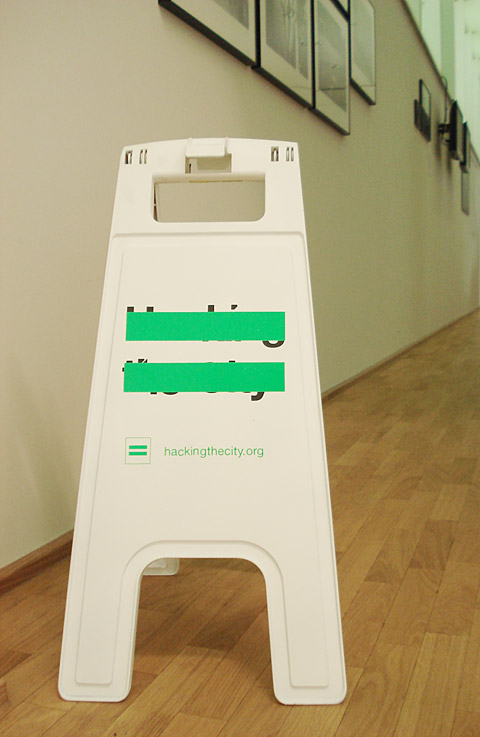 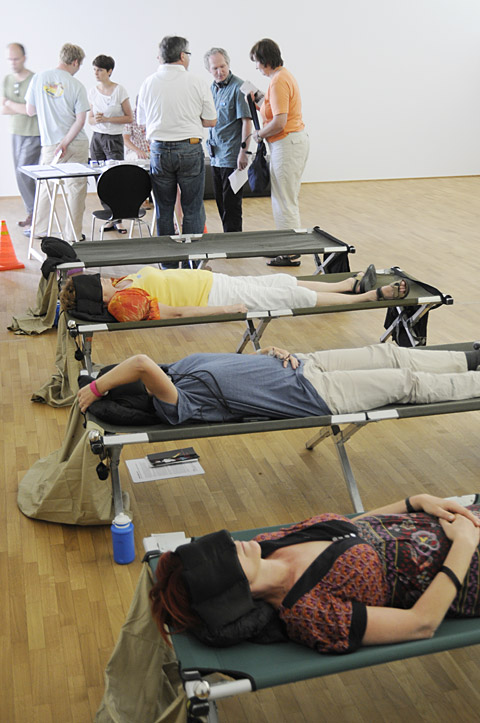 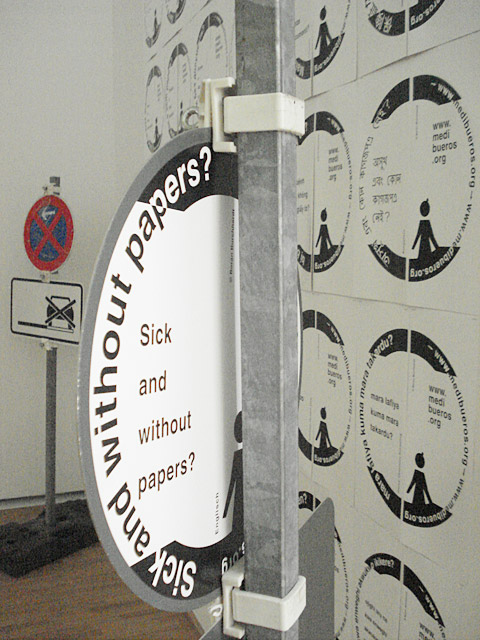 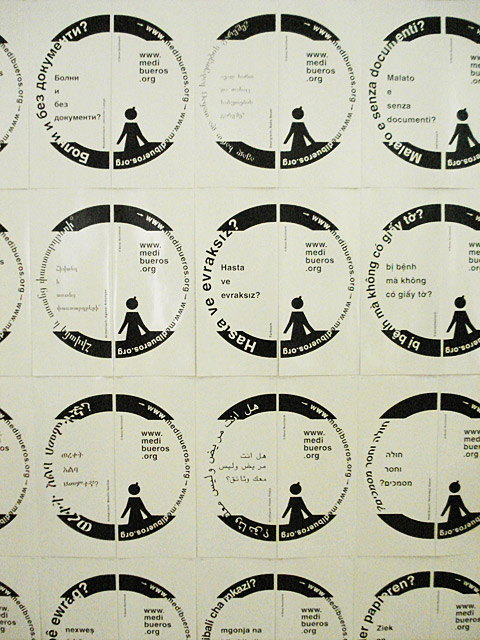