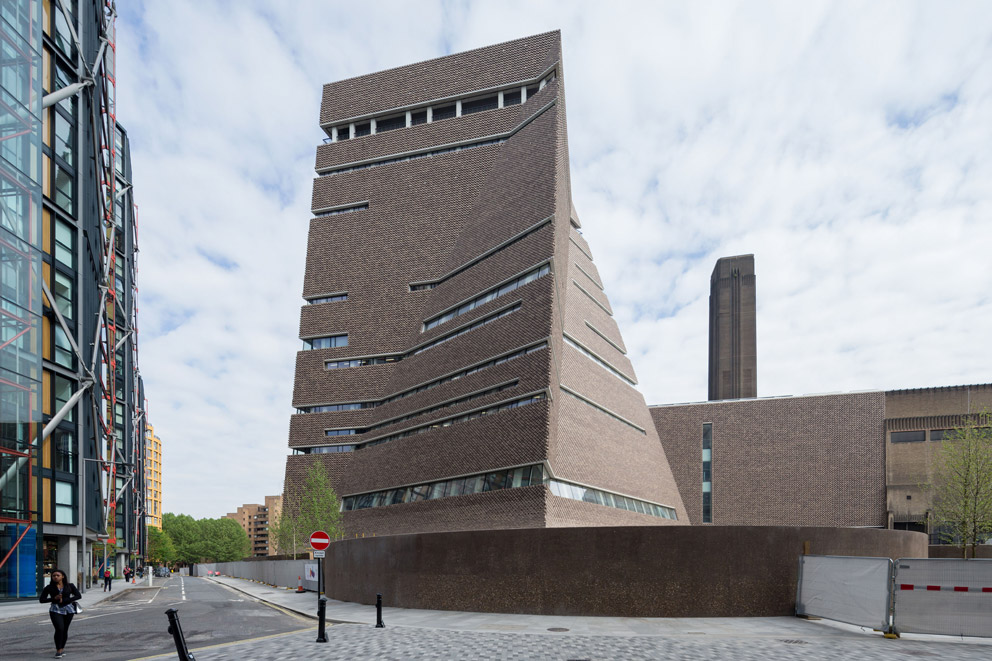 The “Switch House”: for the extension to the Tate Modern, architects Herzog & de Meuron conceived an annex located behind the huge former turbine hall that houses both exhibition areas and a spacious leisure area for museum visitors. Photo © Iwan Baan

London’s NEO Bankside, offering the latest almost triangular steel-and-glass penthouses at slightly north of £5 million. With a once-guaranteed view of the City at night. Frankfurt might want to compete with London post-Brexit, but where real-estate prices are concerned, no way. To build a square meter of new luxury apartment space in Frankfurt’s chic Westend district costs about €8,000, on the South Bank a square meter of White Cube costs more than £12,000 – if it goes by the name of Tate Modern Switch House that is.

The Tate Modern prides itself on attracting more visitors than any other contemporary art museum world-wide, and under former director Chris Dercon it evidently spared no expense in creating an icon that likewise hit top figures. The Herzog & de Meuron annex cost no less than £260 million by the time it was completed. Money well spent on a building that really is brash in its massive proportions? Not really.

It’s never easy to slot a new structure into the urban fabric, especially here behind the massive old turbine hall and on top of the old 1947 reinforced concrete tanks that provided the oil to power the plant. And in front of the chic NEO Bankside residences-cum-showrooms. It was a tall order and the result looks like a concrete pyramid that, when dropped in from on high, got twisted – purportedly in response to the layout of the tanks below. 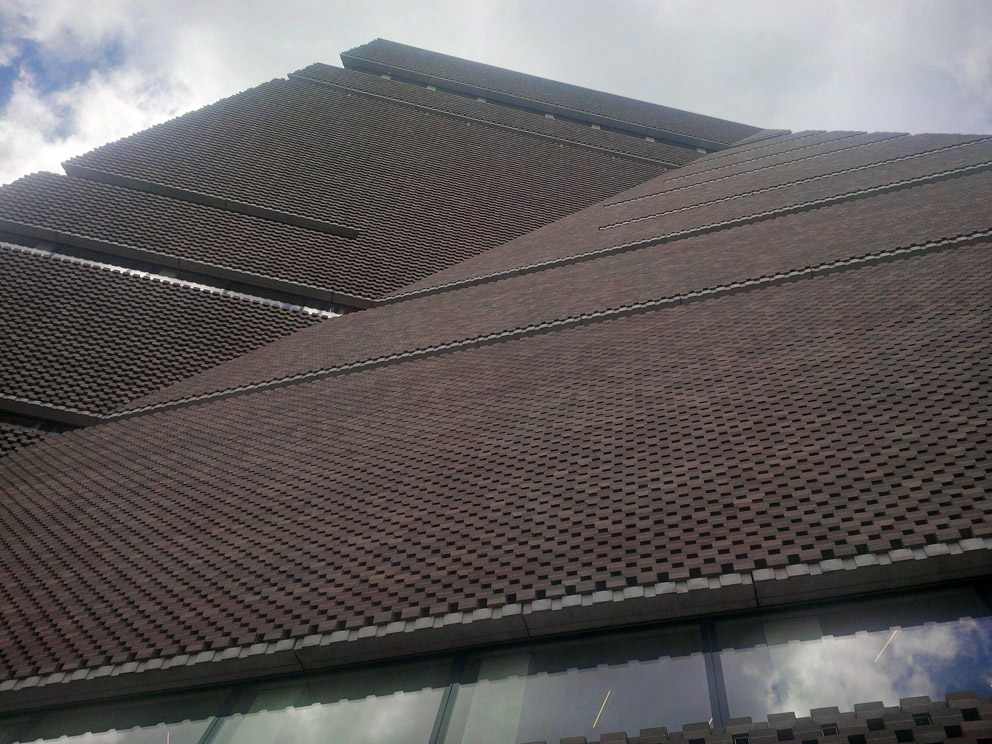 Pyramid meets bunker? – Bends in the volume, bricks spaced as a checkerboard, and horizontal slits give the façade a more dynamic look. Photo © Jeremy Gaines

To make the overall effect less in-the-face for the NEO-B homeowners opposite who now gaze at it at night, the new annex was given a curtain wall made of bricks interrupted by slits. The “bla” on the website says this opens it up to the outside world, marketingspeak reminiscent of the NEO-B investor architecture. Possibly the truth is that if the structure had been left in concrete it would simply have been too ugly.

The checkerboard bricks all rest on rubber shock mounts like an Eames chair. For all the hype, the pattern does not emulate the bricks of the original power station next door, only the bricks do. And on closer inspection claims that the brickwork resembles Moorish-Oriental ornamentalism prove to be well off the mark, as the summer sunlight in London rarely sends shadows of lattices dancing in the interior. The latter is invariably all fair-faced concrete to match that in the tanks, with wooden floors added. 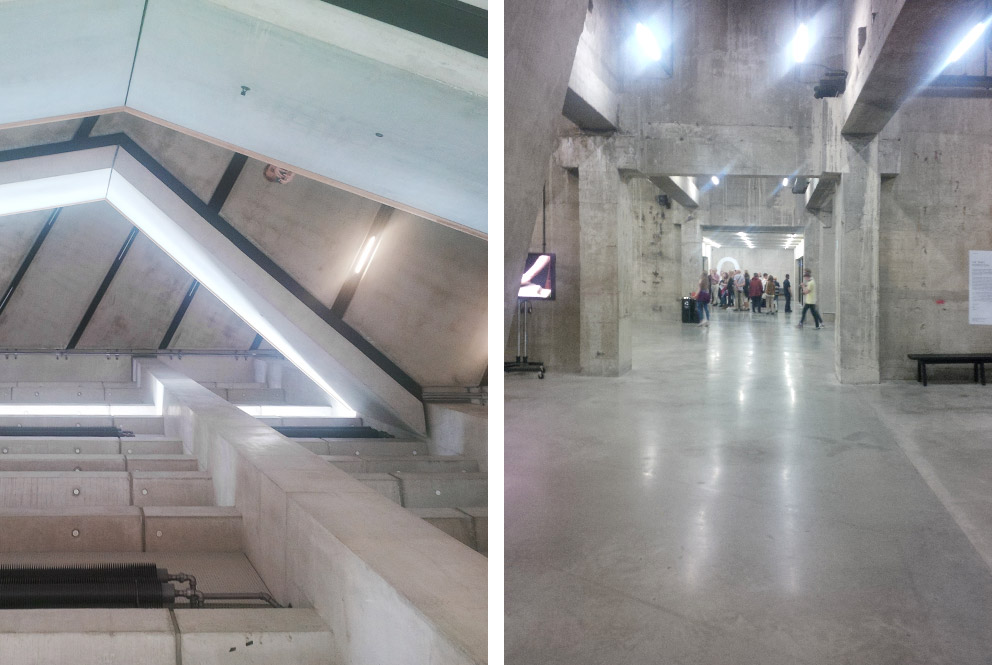 Concrete dominates on the inside: A broad curving staircase links the first three floors. Creating lines of vision and areas for visitors to relax in. Photo © Jeremy Gaines

If there was one role model for this monolith, then it is to be found in Guernsey, where there are towers with similar slits to let in the light. Made a few years before the same meters-thick reinforced concrete as the oil tanks, these remnants of the Atlantic Wall bunker system have defied all attempts to dismantle them. That military context is borne out at the Tate by the signage, where names are stencil-painted onto the tank walls like military instructions. To be highly recommended, however, the filmic installation on Isaan by Apichatpong Weerasethakul: The Thai army oppression it depicts is truly perfect for such a setting.

Chris Dercon (who will be at the helm of the Volksbühne in Berlin soon) repeating himself once again, told the Guardian (Sept. 22, 2015) that “it is a very different type of museum building … what we need is to reinvent not just the definition of what a museum is and who it is for and what we do, but also what it feels like.” How true, despite the stairwell gallery the Switch House feels like a bunker (hitherto the proud preserve of private collectors in Berlin) and the exhibition halls feel like what they are: white rectangular halls. Sadly, that can’t be disguised by labelling things “BMW Tate live” or “Bloomberg connects.” Hans Hollein’s Museum für Moderne Kunst MMK in Frankfurt was far more audacious in its day and boasted similar stairwell galleries. There’s another repetition of history, too, as Jean Christophe Ammann’s opening MMK exhibition in 1991 was fairly similar to what is on show on the first floor of the Switch House. 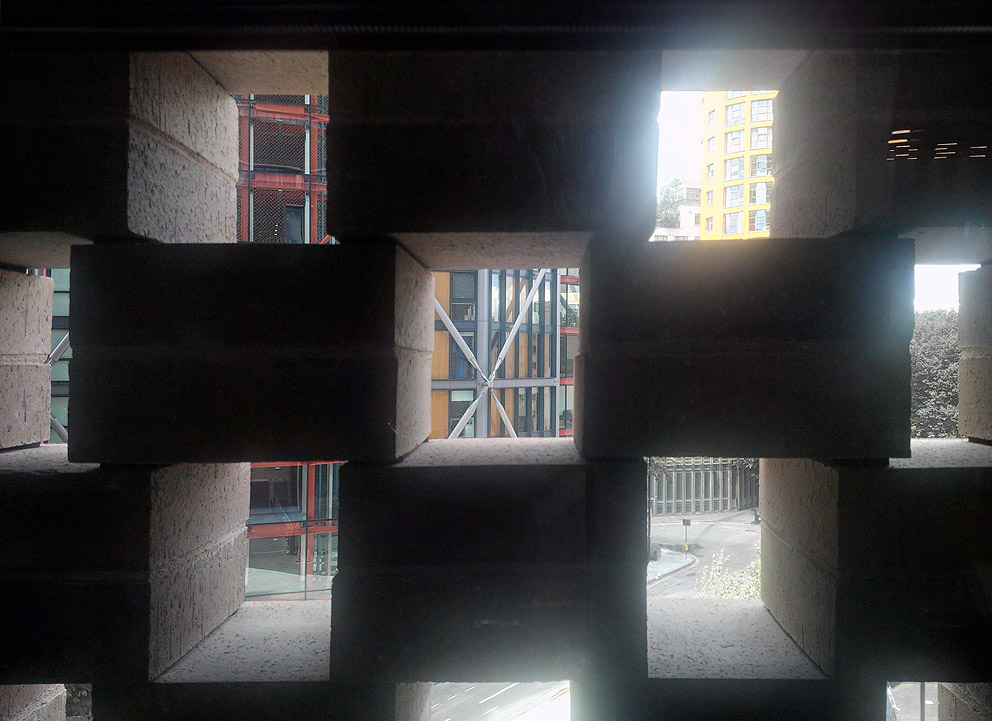 From the inside out: The checkerboard pattern of the brick façade allows daylight in and views out. Photo © Jeremy Gaines 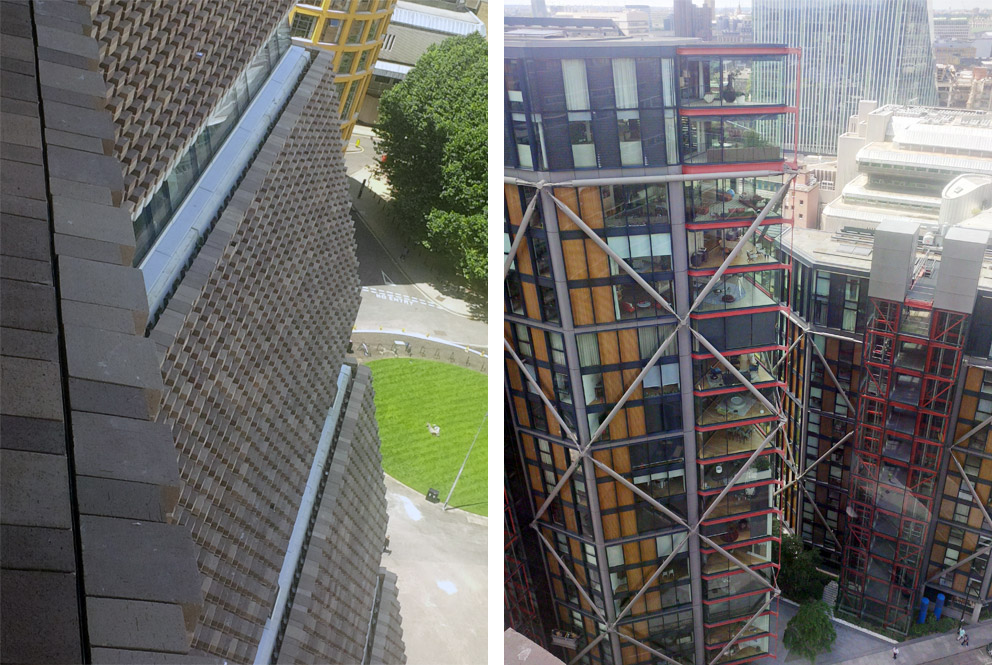 Neighbors: The extension to the Tate Modern on the South Bank of the Thames is right next to the “Neo-Bankside” luxury apartments (on the r.). Photo © Jeremy Gaines 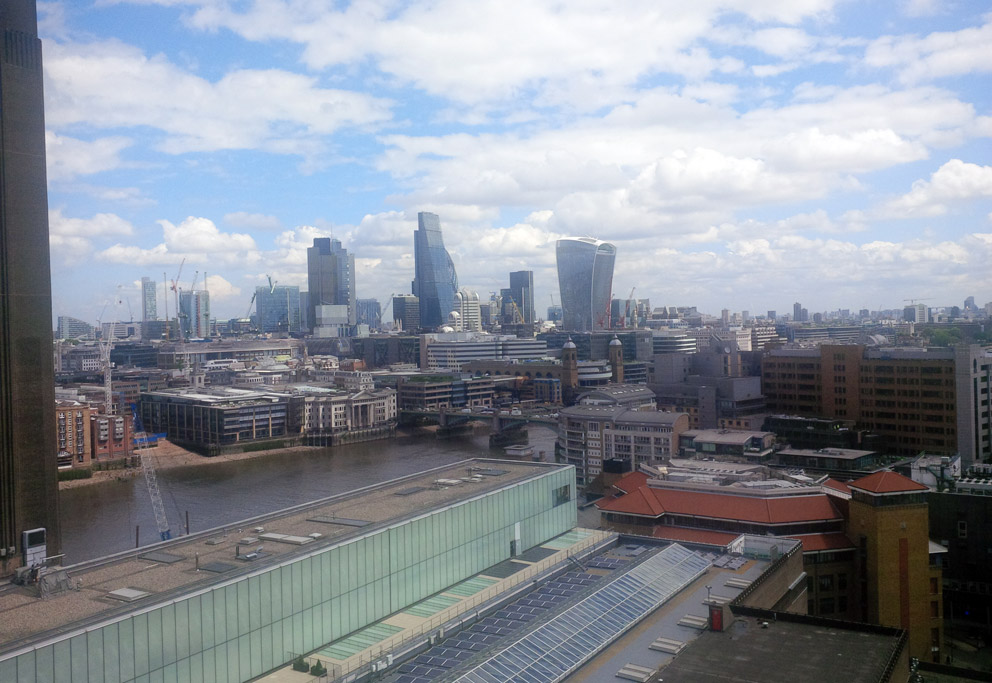 London keeps growing: View from the “Switch House” at the high-rise line of the City with “Tower 42” (on the l.), the “Leadenhall Building” (center) and “20 Fenchurch Street”, also known as the “Walkie-Talkie” (on the r.). Photo © Jeremy Gaines
Advertisement