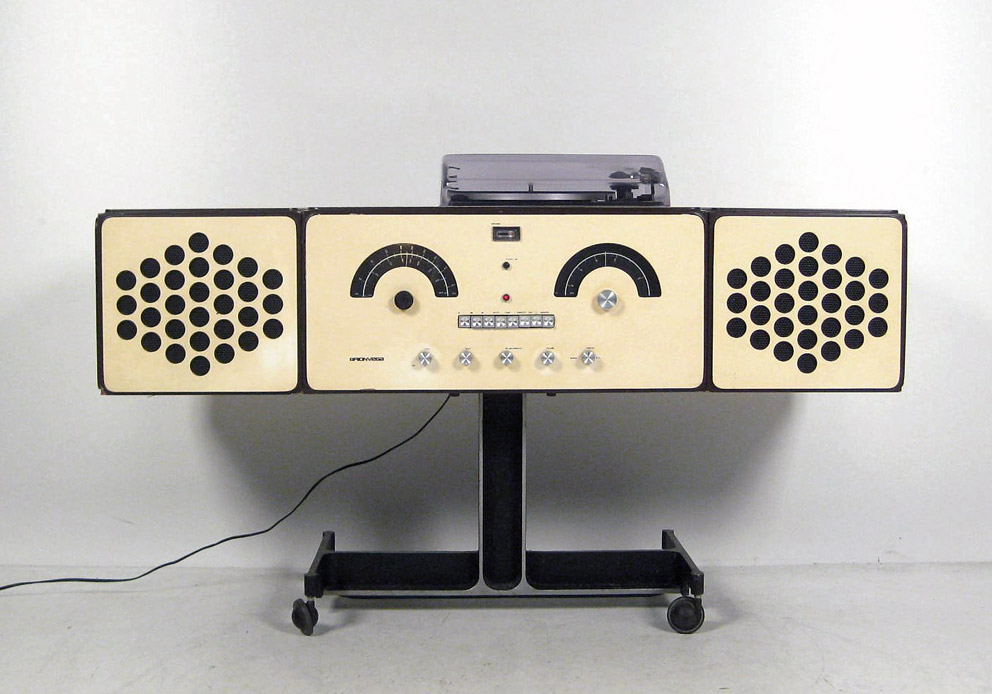 RR one, two, six. Sounds a bit like an R2D2. But it isn’t. If Star Wars had been dreamed up in Italy and not in California, then the saga would have focused not only on technological achievements and a naïve space fairytale. Just imagine what would have happened if Achille Castiglioni, Ettore Sottsass and Gaetano Pesce had joined forces and been the film architects and set designers for an Italian sci-fi movie. In the wake of the Spaghetti Western the Cinecittà would have challenged the Americans in this long shot for the “last frontier”. But we’re digressing, especially as sci-fi and Italy is an impossibility, not despite but precisely because of the Futuristi and their poeticization of the machine.

What is for sure: The RR126 launched much too early for the generation that grew up with Stars Wars. On top of which, it was not at all techy. For the brothers Achille and Pier Giacomo Castiglioni designed by the “Radiofonografo” back in 1966 for Brionvega. The unit is a complete hi-fi system born of the spirit of Pop and resembling a sympathetic techy house pet on castors. Along with big round eyes, semi-circular brows, a row of teeth as a mouth, and two ears with lots of round holes.
After all those dull music boxes in walnut veneer (ironically the RR126 was also available with a walnut exterior, although it looked decidedly plastic) and bland 1950s phono systems, the RR126 could quite easily have been taken for a space invader. Or simply a Rock revolution in the living room, where, after all, a lot suddenly started to change. Such a system was, if only by virtue of its price, a status symbol and was a mark of distinction for the wealthy aesthetes among the armchair revolutionaries.

Giuseppe Brion and an engineer called Pajetta founded Brionvega in 1945 in Milan, and initially it went by the name of B.P.M. Brionvega primarily caught the eye for working with renowned designers such as Mario Bellini, Richard Sapper, Marco Zanuso, the Castiglioni brothers and Ettore Sottsass. As regards hi-fi stereo systems, as well as portable radios and TVs, in its heyday the Brionvega design was mentioned in the same breath as companies such as Braun (with Hans Gugelot and Dieter Rams), Wega (with Verner Panton and Hartmut Esslinger) or Bang&Olufsen (with Jacob Jensen and David Lewis). But as regards freshness, courage, originality, and precisely that typical Italian design, only Wega was able to rival Brionvega, and only briefly at that. While Rams had claimed that “good design is as little design as possible,” here the approach was far more cheerful and colorful. It is no coincidence that products such as the 1963 RadioCubo TS502 and the portable TVs Richard Sapper and Marco Zanuso designed – the “Doney” (1962) and the “Algol” (1964) – have both long since become design classics.

The joy of playfully ironic and self-confidently designed music systems did not last long in the entertainment electronics segment. From the mid-1980s onwards, and with the Japanese electronics industry rampant, design got jettisoned. Forthwith, rack modules reminiscent of studio technology predominated: simple boxes with front panels or, at best, with a wooden case. It certainly is strange the way many hi-fi fans seem only to see with their ears. And while the high-end appliances were anything but cheap, they remained, irrespective of whether they came in black or brushed aluminum, with or without a display, for better or for worse simply examples of a shoe-box or building block. Only very recently has the sector seen a return to something like ambitious design (one example being the Geneva company).

How different the almost immoderate RR126! Not that the Castiglionis weren’t aiming for modularity. The RR126 is a variable spatial object available in three versions that could stand alone: with the loudspeakers on the left and right, with both installed on top, or with both independent of the central unit and placed elsewhere in the room. Mario Bellini sized the idea in 1970 and reinterpreted it his way (again for Brionvega) with his cubic “Totem RR130”. And clearly shows that the mood had shifted away from Pop to Minimal art.

Today, machines are mainly made up of silicon and hide their functions in a black box. They usually lack what Carlo Mollino once called the “morality of feeling”. Yet nothing of the beauty of mechanical (or once electric or electronic) machines has been lost, it’s all still there. There are countless examples that could be cited, from Lambrettas to Moto Guzzis, from a vacuum cleaner called “Spalter” to a sewing machine named “Mirella”. So we declare: Ciao, bella macchina, ciao! Arrivederci! 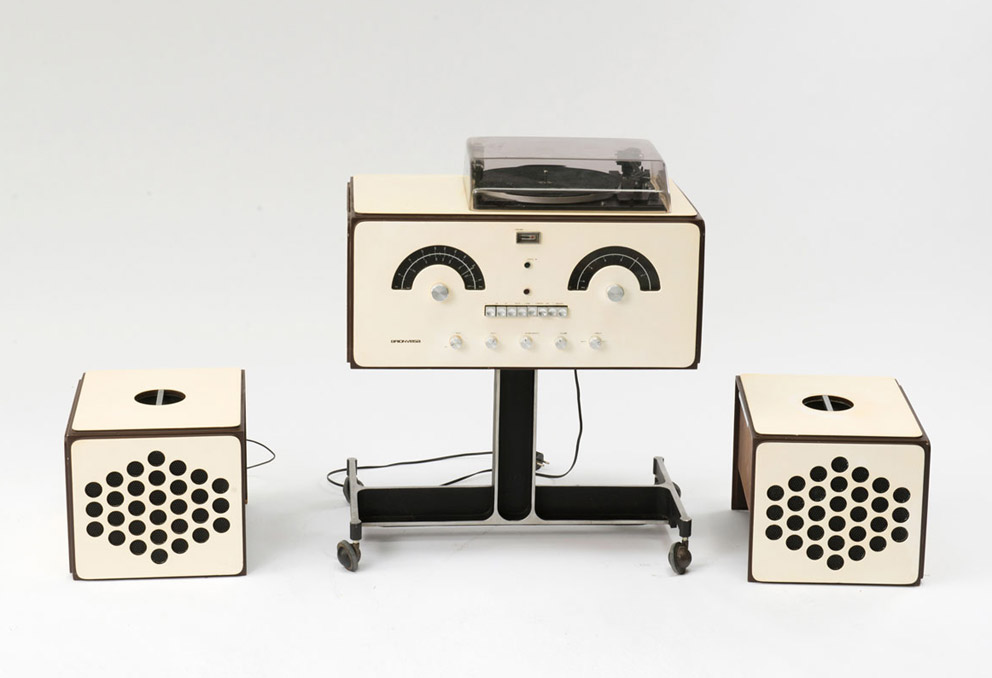 Modularity: the loudspeakers could be independent of the central unit and placed elsewhere in the room. Photo © Lauritz.com A/S 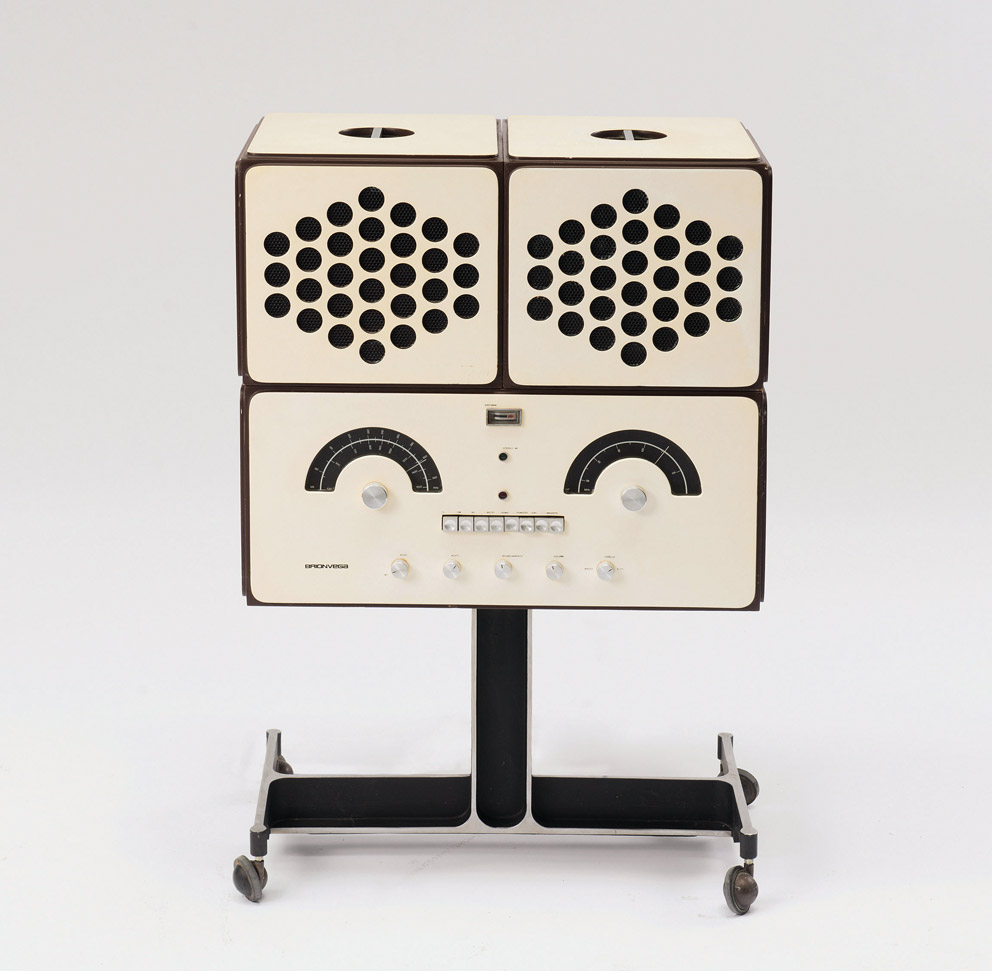 … But also both installed on top. Photo © Lauritz.com A/S 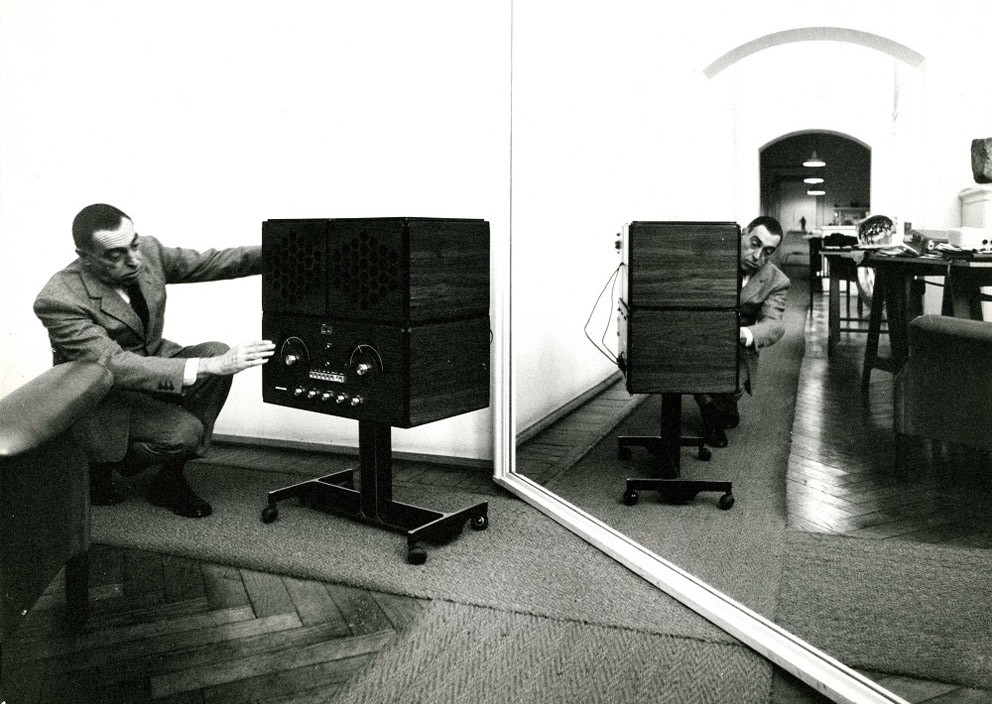 Bella macchina and its maestro: Achille Castiglioni and his “RR126“ in his studio. Photo © F. Biganzoli 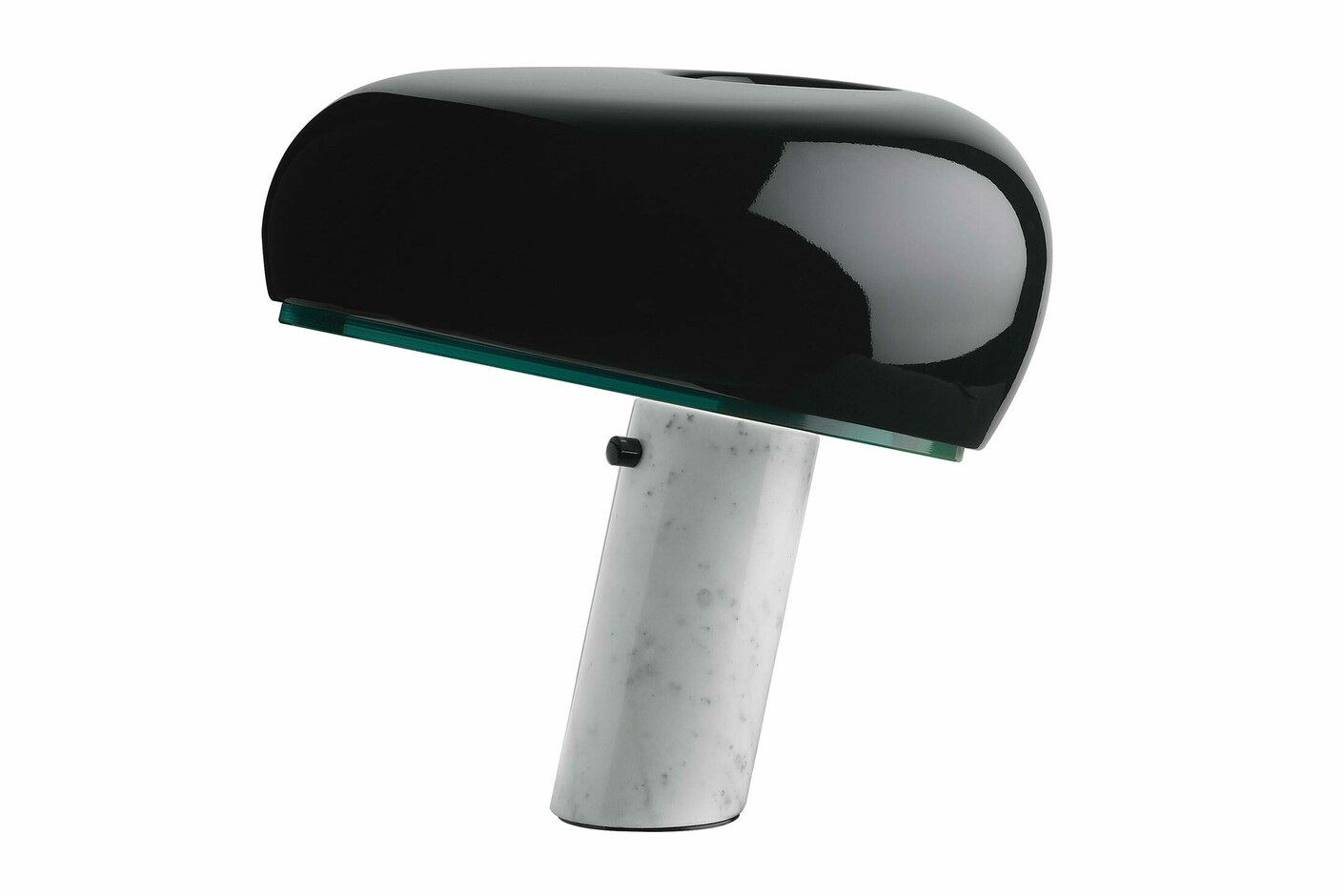 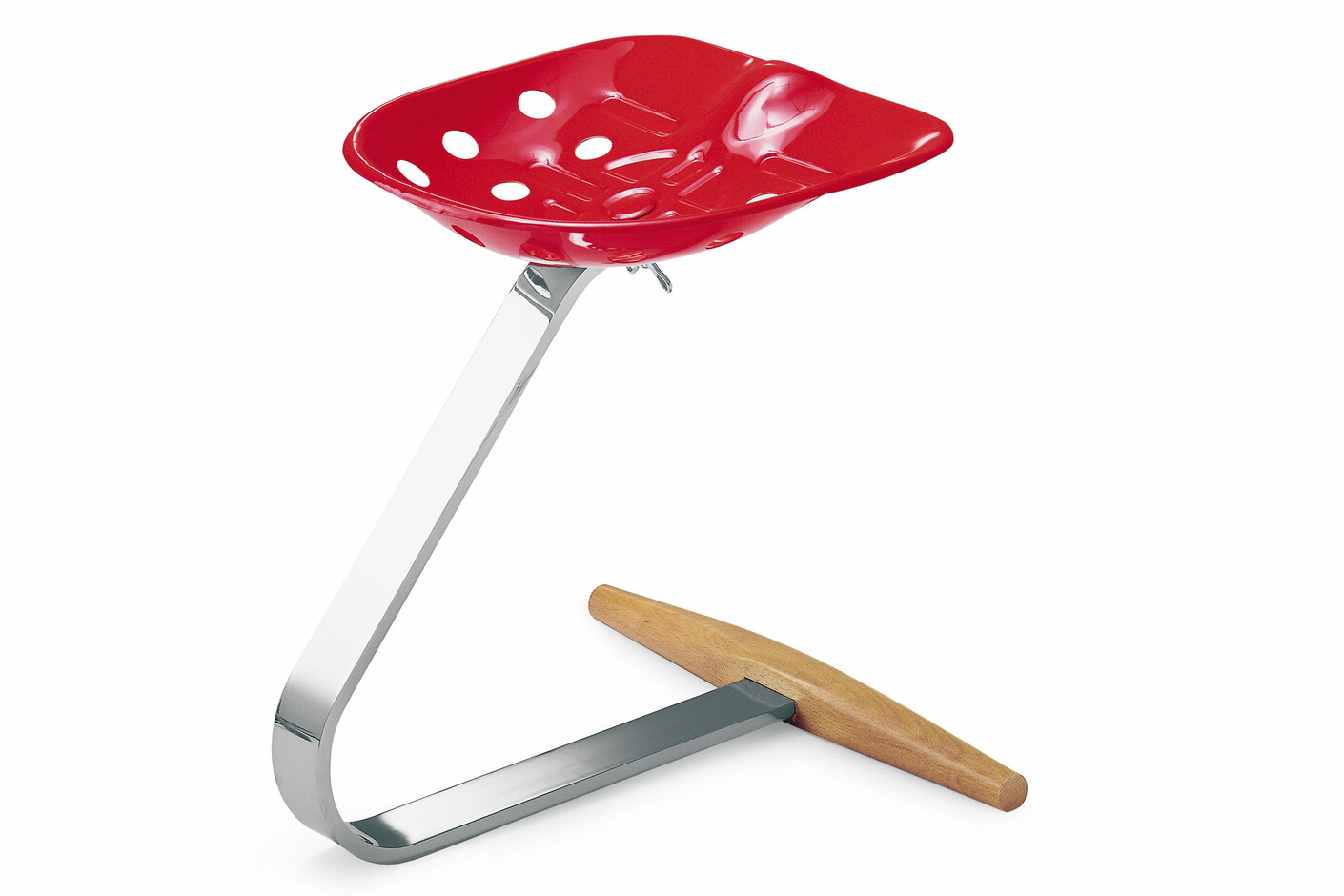 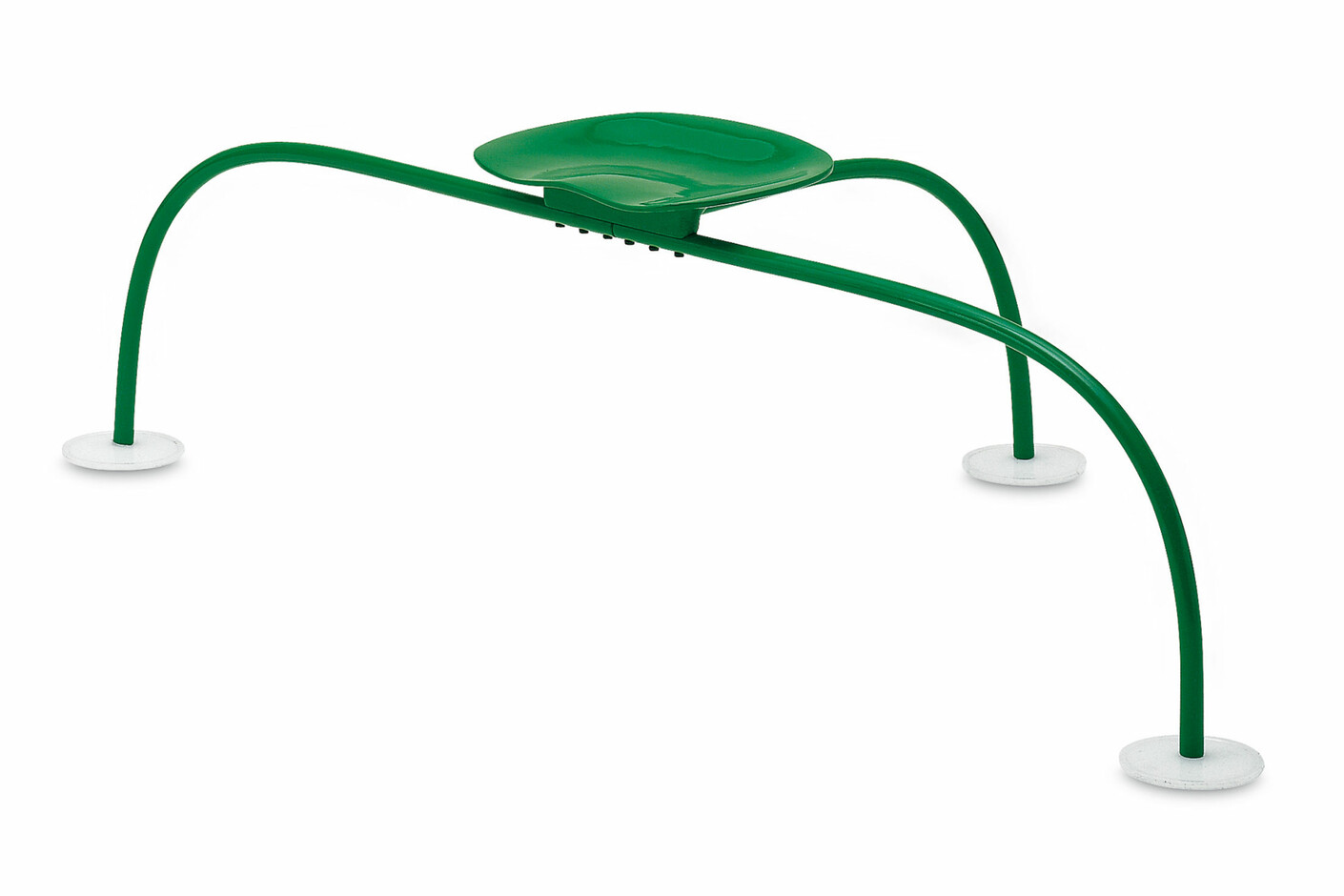 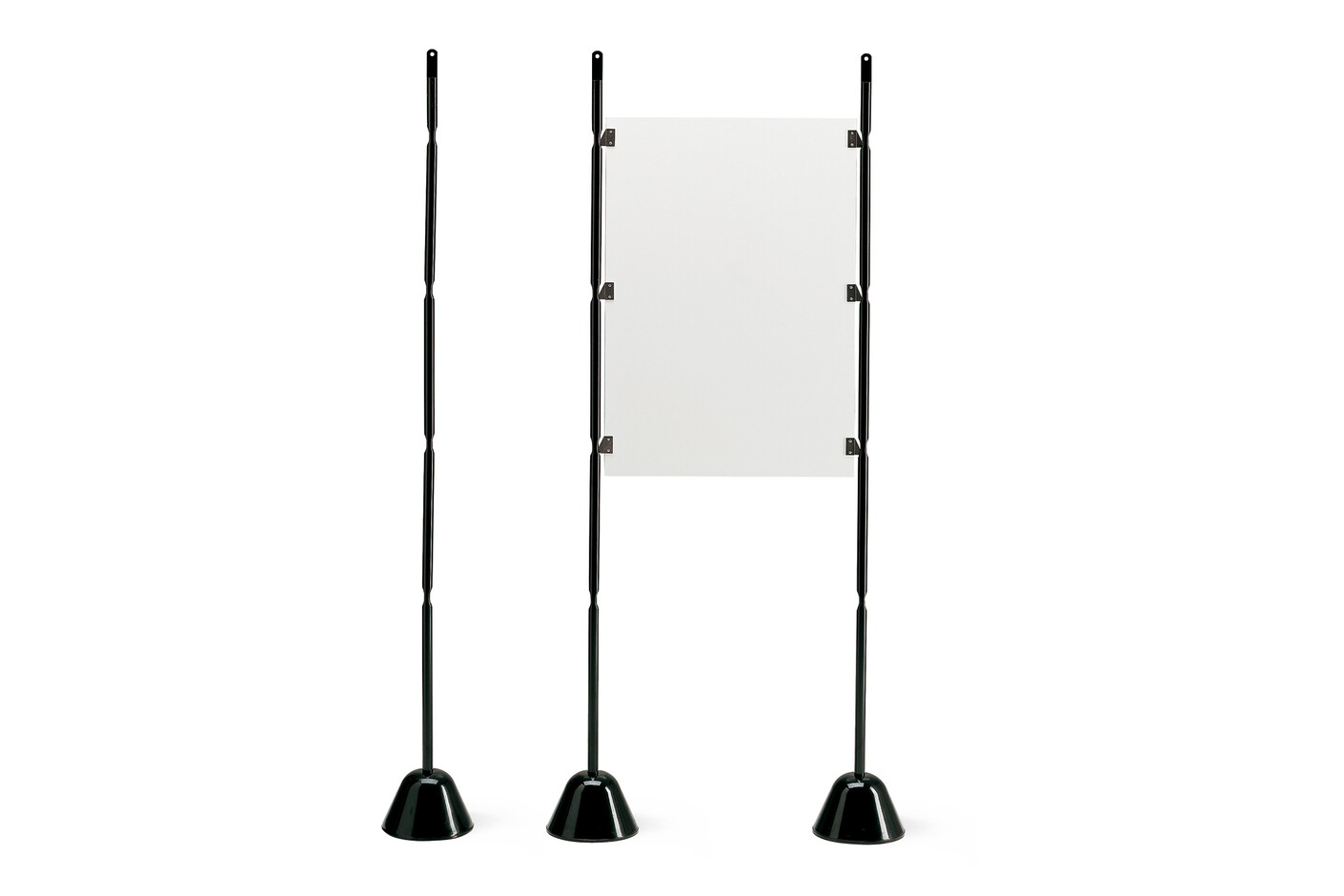 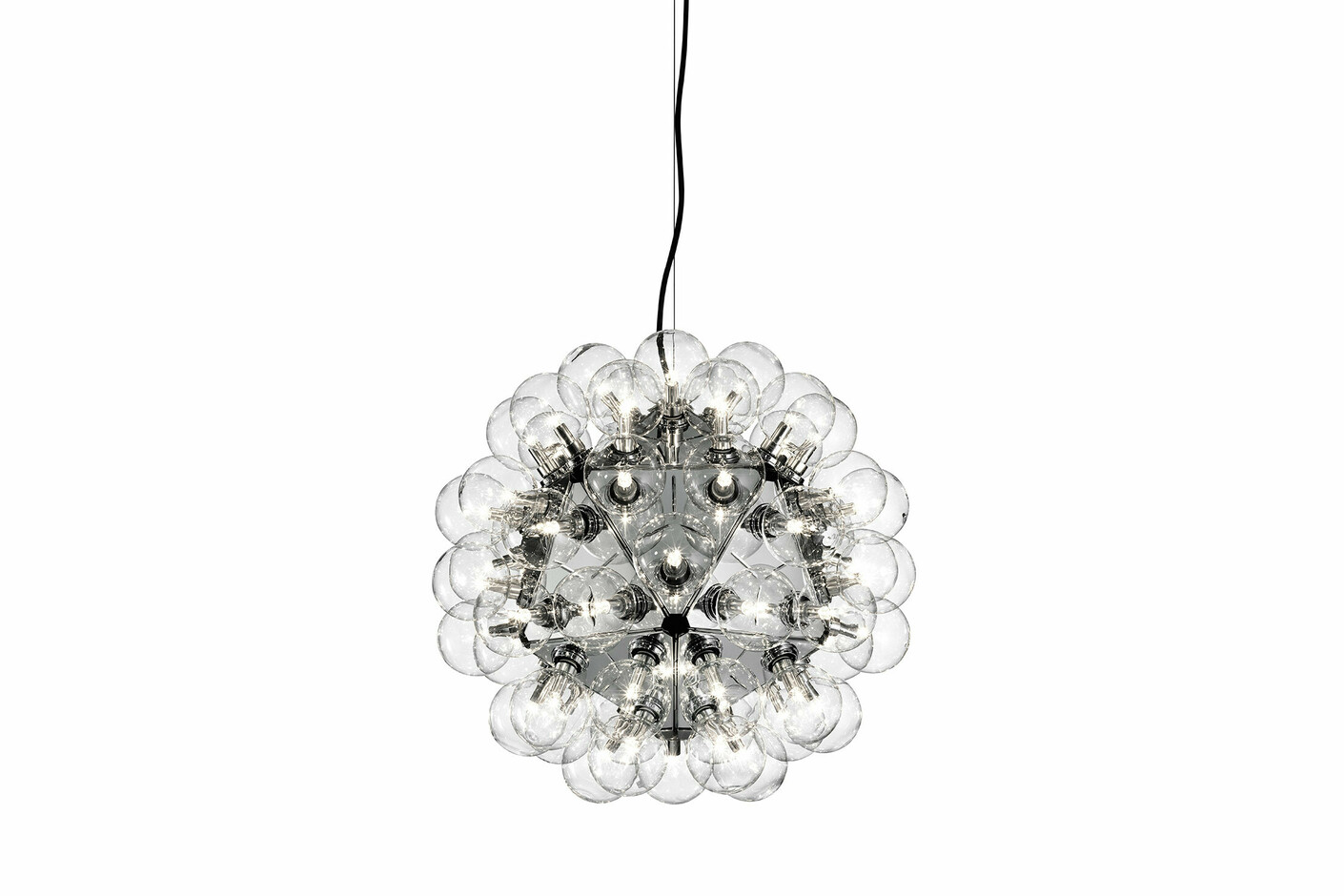 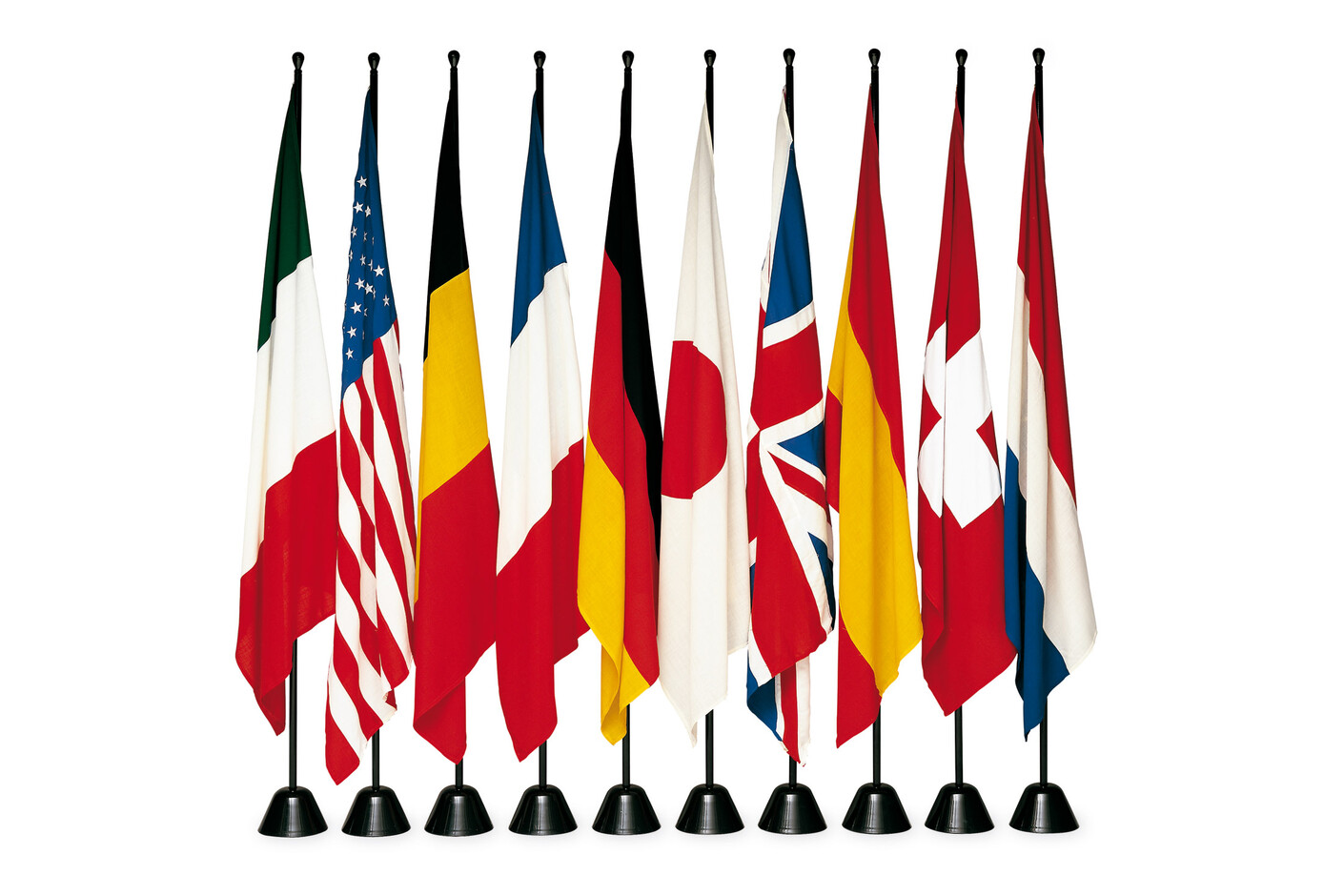 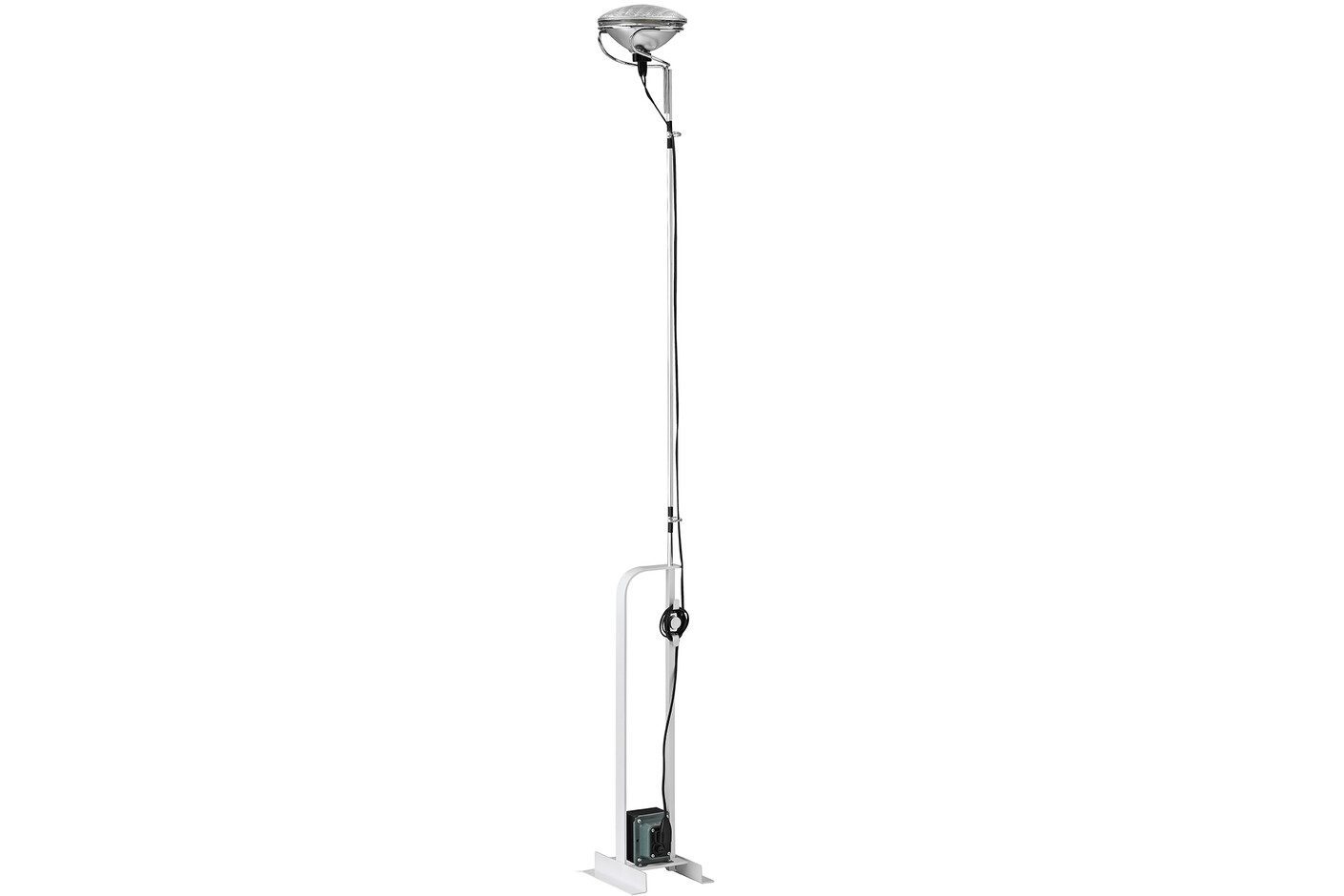 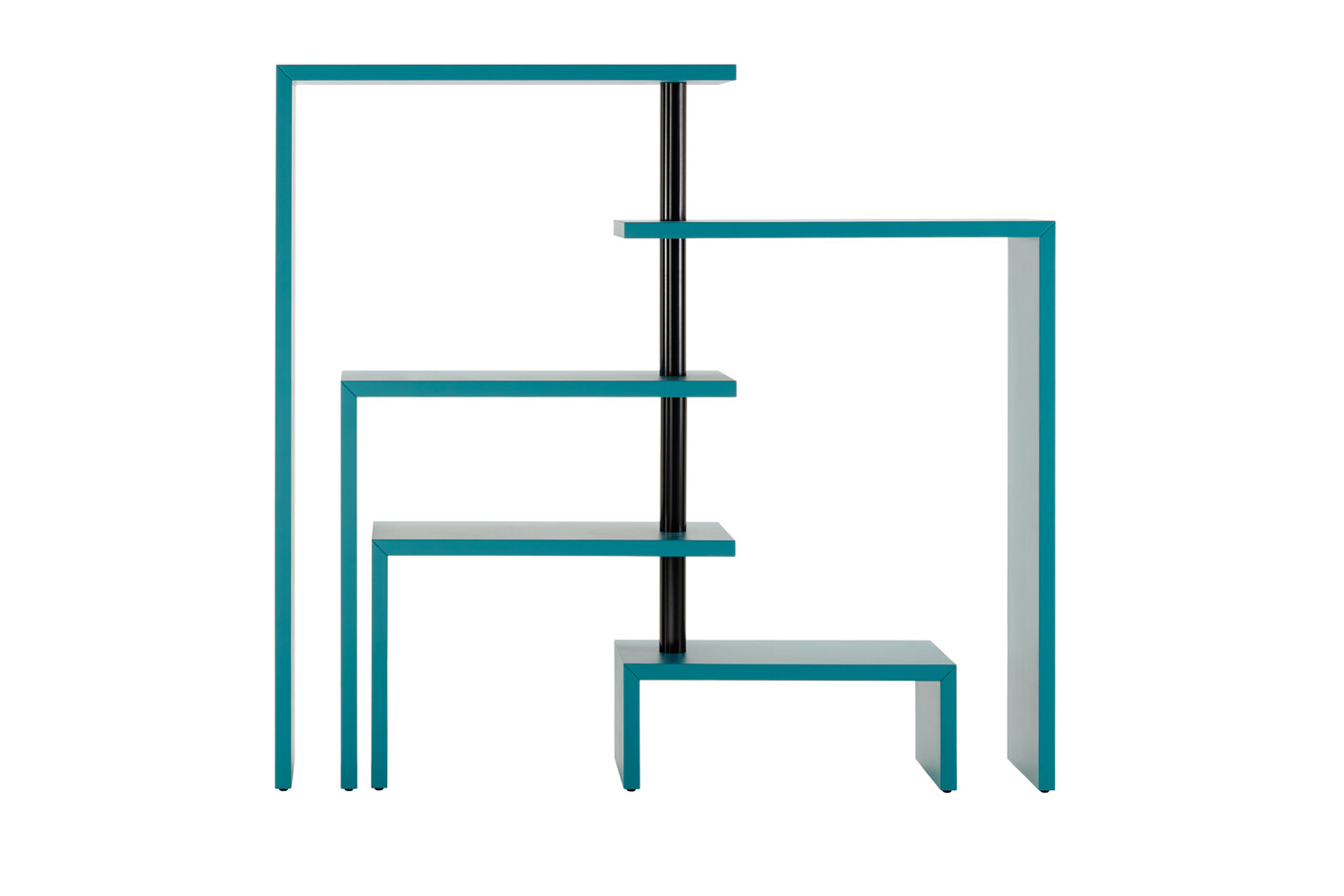