In only a few weeks' time, on June 3, the Berlin Brandenburg airport will open. The countdown's definitely on and there' s construction work going on everywhere, trial operation with extras are already under way. And Heike Nehl and Sibylle Schlaich from Moniteurs are likewise regularly to be met on site. They're making sure the signage system their office for corporate and information design created is being put in place as intended. On location they discuss how it can still be optimized. Here the position of a sign has to be changed, there a pictogram adjusted. And a server with a database containing all the info on the signs has to be set up – at present it features some 2,900 data sets.

"The signage system for the Berlin Brandenburg airport combines the identity with the function," explains Sibylle Schlaich. Borrowing from the concept developed by architects Gerkan, Marg und Partner, the signage system alludes to the pine forests of Brandenburg and Berlin's building tradition, such as the Alte Museum created by Karl Friedrich Schinkel or Mies van der Rohe's Neue Nationalgalerie, referencing them graphically by horizontal lines. Red, the color denoting both the state of Berlin and that of Brandenburg, has been darkened slightly to render it more legible and in combination with white and anthracite it is deployed in several tonal values – the choice was made right at the outset, say the Moniteurs. The signs are available as modular elements both flush-mounted on walls, freestanding or hung from walls and glass panes. The designers at Moniteurs were able to bring their ideas to bear in many areas of the airport, from the traffic signs on the access routes through to the guidance signage to car parks.

Each element of the design was thought through down to the smallest details, for example the red, which is reserved inside the airport for the signs. It accents things perfectly alongside the wood paneling, stone floors and white walls. Moniteurs insisted the dark red seem as high-quality as possible, and this was a challenge above all when it came to back-lit displays, as foils for the signs usually seemed garish, reminiscent of ad hoardings. After countless trial prints, an optimal technique was developed involving several layers of back-printing. The red then only glimmers slightly, and is calming. By contrast, the white type is especially bright and all the more legible.

In the beginning was the book

In conversation with Heike Nehl and Sibylle Schlaich it swiftly emerges that they really undertook extensive research for the project. Which fits well with the story that it all started with a book. When gmp Architekten applied to act as the planners realizing the Berlin Brandenburg airport, in 2004 they commissioned Moniteurs to devise a presentation for them in book form. On this basis, down through the years the collaboration evolved on the signage system.

gmp Architekten developed a design manual. In it, each topic that plays a role in the design is discussed, be it the urban design concept, the landscape architecture or the guidance signage system. Everyone then involved going forward was given it as the basis for the planning, be they construction engineers, road builders or furniture makers. For example, it present a square raster grid used for all formats. Moniteurs emphasize that the design manual had a decisive impact on the entire project. Thus, of the five guidance systems, it was the traffic signage system that had to be devised first, whereas the others came later – and yet the result is a uniform overall picture.

During the entire development and planning phase, airports were inspected, books consulted, films viewed, and friendly frequent flyers mailed images. This gave the Moniteurs many an insight into the development of signage systems. In the 1960s and 1970s, some airports were built with a holistic standard for the design, each with a uniform CI and concept from the building through to the fonts. Designers from various disciplines worked hand in glove, with a strong feel for quality and detailing; one need think only of airports like Heathrow, Charles de Gaulle and Schiphol. However, as passenger numbers soared, so the signage systems got standardized. Irrespective of where you landed, you were meant to feel at home by being able to find your way. The use of standardized pictograms was destined to support this trend. In recent years the view on things has changed somewhat and the notion of identity is being emphasized once again. Since Berlin Brandenburg airport is being built from scratch, there was a rare opportunity to develop a strong visual identity and an unique signage system. The approach was certainly helped by the fact that from an early point in the proceedings gmp Architekten, JSK Architekten and Moniteurs all pulled together.

"Signage systems always have something minimalist about them. Sometimes it's hard to explain that we spend years developing them," explains Heike Nehl. Each sign contains various specific items of information placed in particular places. By dint the fact that most viewers will be moving, a temporal sequence arises, a logical information chain for each individual path taken. Moniteurs aspire to find a systematic solution, with each new destination, each new route triggering new elements in the planning, because quite possible various sign locations are affected. When in position, each sign contains a lot of information that in turn has to refer to different locations.

The results will become apparent very soon, as some parts of the airport are as good as ready for commissioning and operation. They intimate how the overall facility will later look. For example, there's the Pier Nord, an area that the Moniteurs really like. It houses the departure points, namely Gates B30 thru B45. The route to the pier proceeds along a large corridor, suffused with light thanks to the large windows. Here, no illuminated displays are needs, and the writing is directly on the walls and window panes. Here, to stop anyone colliding with a window, the large panes of glass bear the flow lines of the air over wings that enable airplane to rise. Visible, decent – and elaborated down to the details. 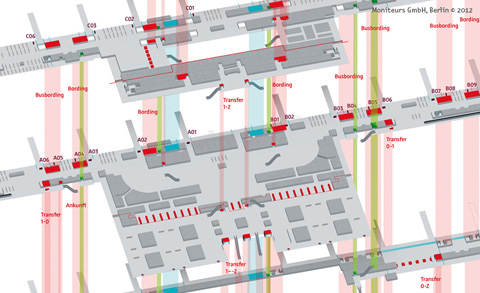 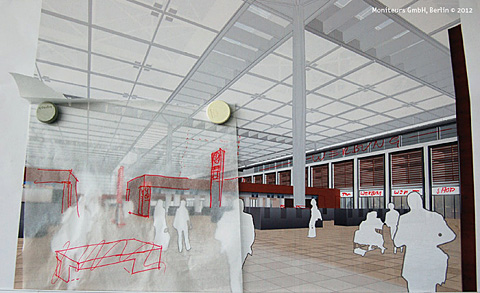 Sketches for the planning of the signage, photo © Moniteurs 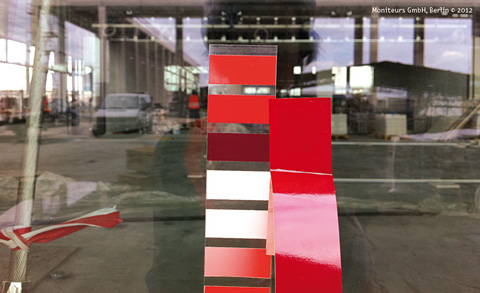 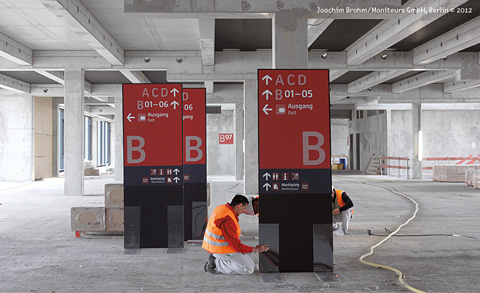 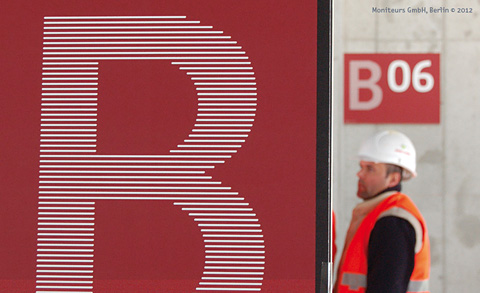 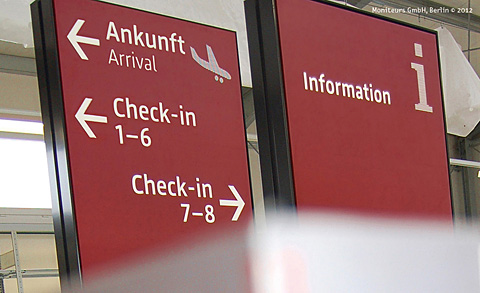 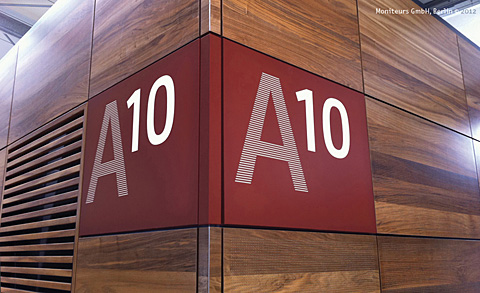 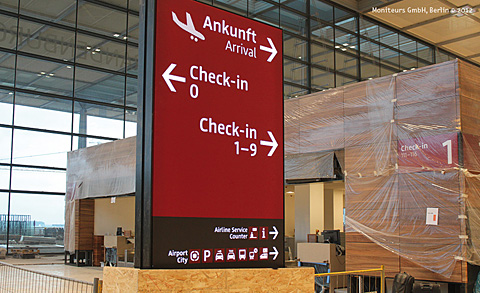 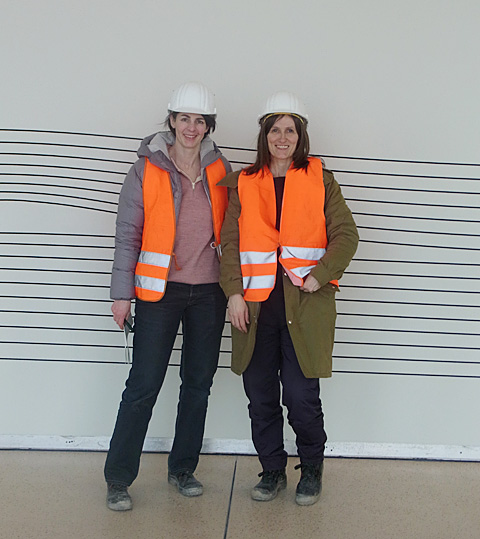 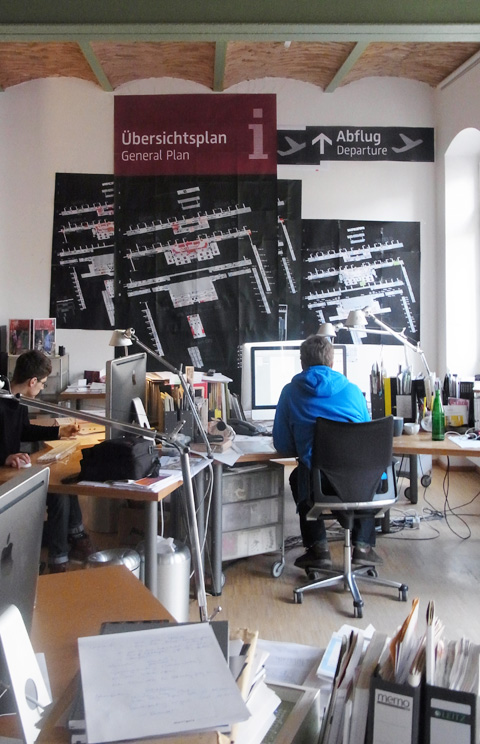 View into the office of Moniteurs in Berlin, photo © Nina Reetzke, Stylepark 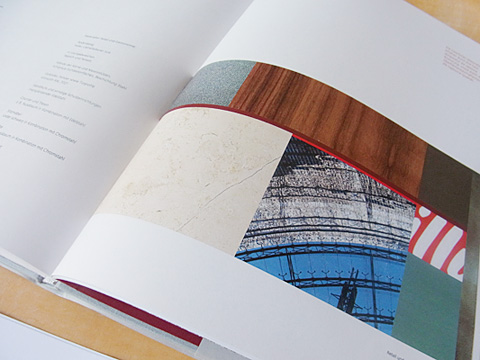 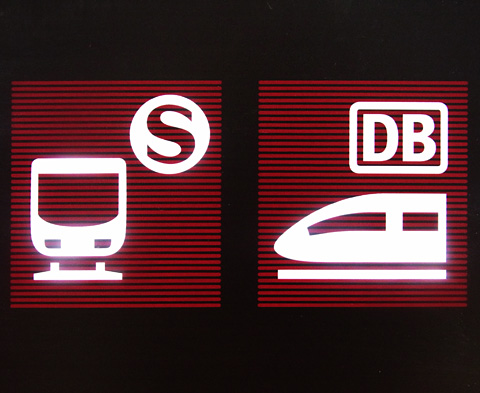 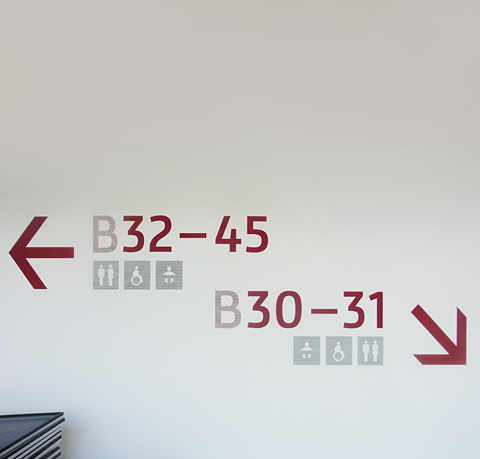 One of the first signages installed at the airport, photo © Nina Reetzke, Stylepark 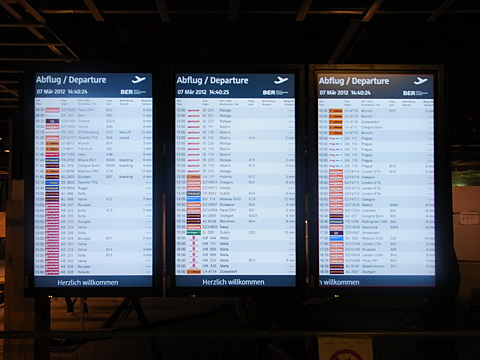 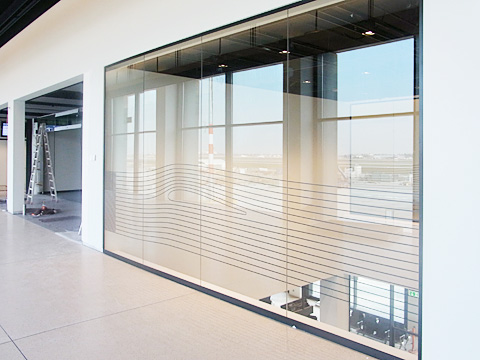 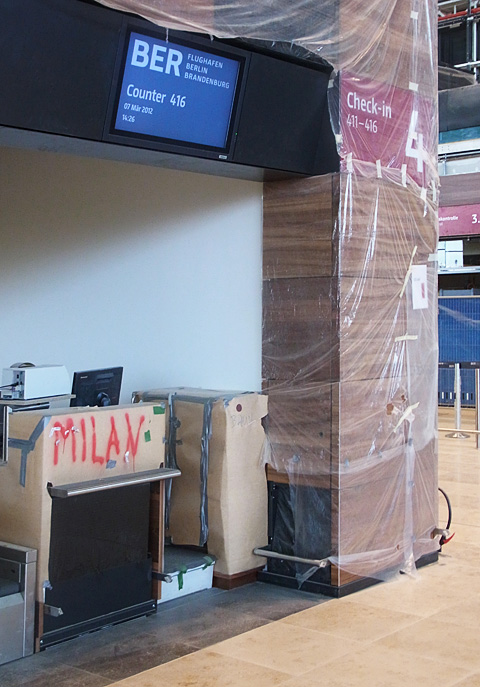 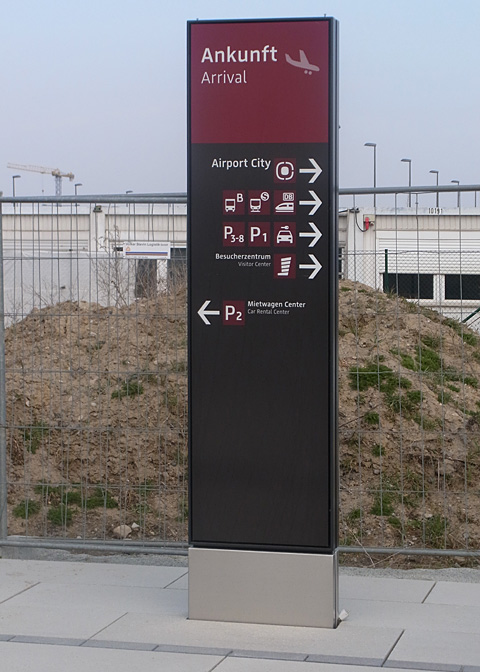 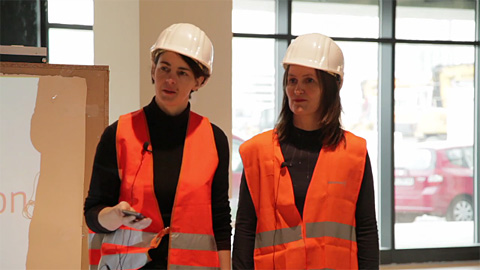