Oh those great old values! They are experiencing a boom, not only at automakers and not only in Germany but in general. So let us then reflect on the value of things; the rediscovery of old values is currently all-pervasive. And before long we think of things made laboriously with our own hands, the environment and the careful use of resources. You know what you've got and what you own. In the auto industry and in architecture - suddenly these areas have a connection to art! The old values are currently so green, you would think there had never been ecological problems. And in the furniture industry?

Marek Gut has long since known where the old values lie in this area. The young designer from Linz has discovered them in bourgeois items of furniture. "We want to take up old traditions again, because they have been put to great use," says the designer born in Cracow. Utilized namely for centuries and firmly anchored in the lives of their users and owners. Why should we deny our own habits, get rid of traditional everyday rituals and discard the old and trusted when it is so practical? So let us spare a thought for bourgeois furniture, after all, it is not that bad: the corner seat, in southern climes often accompanied by a crucifix, or the commode. They were definitely not trendsetters in recent years, were replaced by all manner of high boards and benches. But Marek Gut and his team have taken up the challenge of applying the parameters of veritable, bourgeois existence to their designs. His commode is a case in point, and what a case!

Mix and Match - for centuries a successful idea

Typologically, it is a cupboard fitted with drawers, at one time something between a chest and a cabinet. Its name says it all: it is practical and convenient (commode). Crafted from the fun of mixing and matching explains the designer. Mixing and matching over centuries - since the 18th century to be precise, which is how long the commode has existed. A classic item for storing personal and highly private objects, personal treasures, secrets. And Marek Gut's commode?

It is different and yet traditional. An angular-looking box, with walnut veneer, and set on a delicate metal frame. It lands like a Cubist UFO in the modern living room if such a thing still exists, brings back old traditions to it in a fresh interpretation. Reloaded you might have said a couple of years ago. Its interior is strange and yet advantageously convenient. Drawers can be pulled out, niches opened up and entire sections pushed to one side. Marek Gut's commode not only has one secret compartment but many. It makes the most of the secret compartment idea with concealed niches and hidden compartments where you least expect them. A UFO with secret compartments if you like, a treasure chest on stilts, and for all that a bourgeois commode. The gleaming golden yellow varnish of the interior assists the hidden treasures, underscores their value and creates a shining space or letters, files and shares or jewelry. Admittedly, when closed you would never guess what the interior conceals. This is also part of the secret. And if a golden yellow line did not criss-cross the elegant walnut veneer the purpose of the UFO would probably remain entirely hidden to unsuspecting observers. "Bourgeois furniture has a beauty of sorts," says Marek Gut. So does his commode. In the classic, bourgeois sense.

"Cobbler, stick to your last " Marek Gut said to himself and decided not to become a marketing man but a designer. Which is why he entrusted the distribution of his commode to the old, traditional cabinet-makers workshop where it is made: 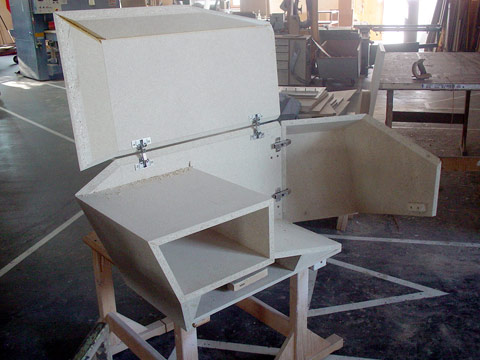 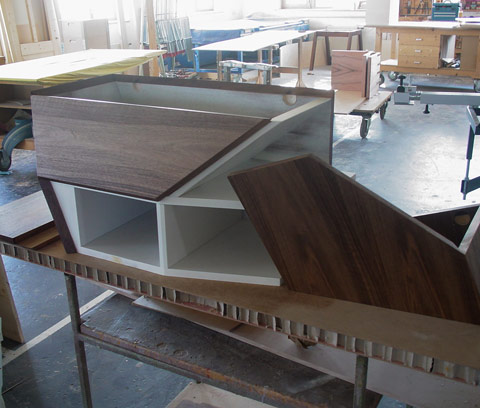 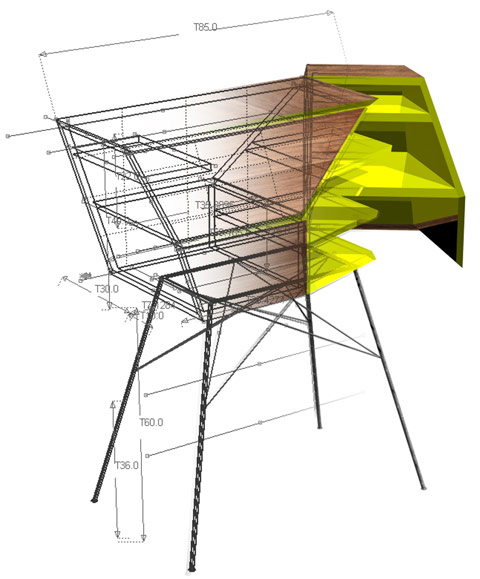 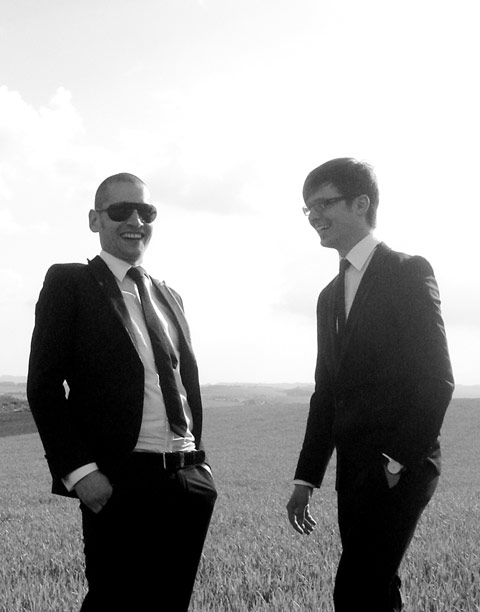 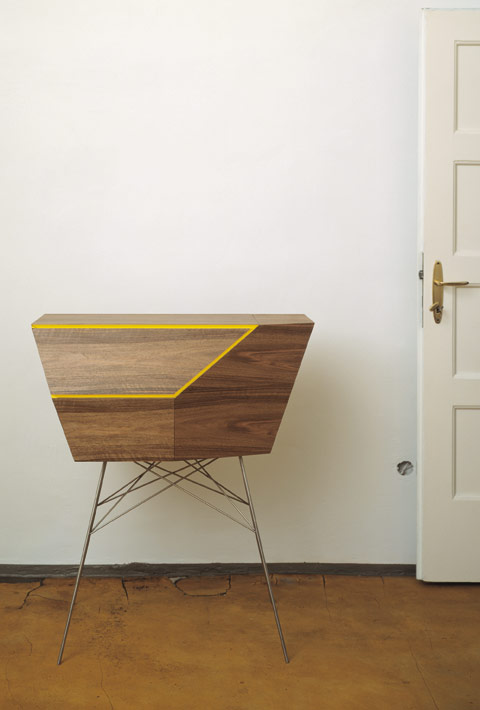 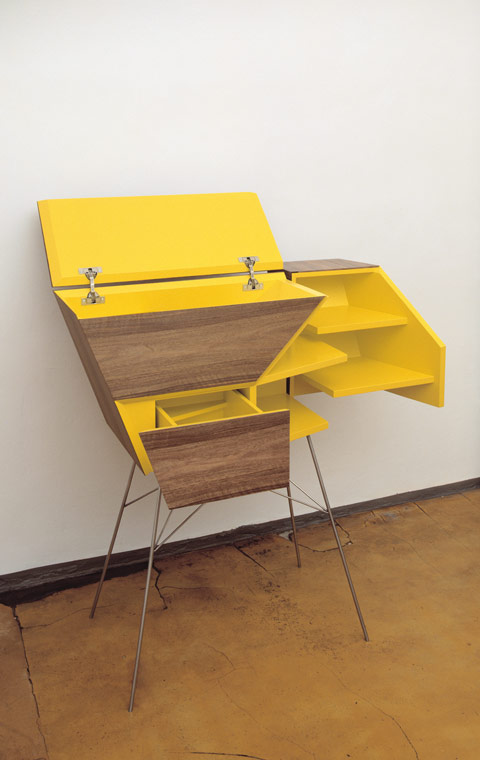 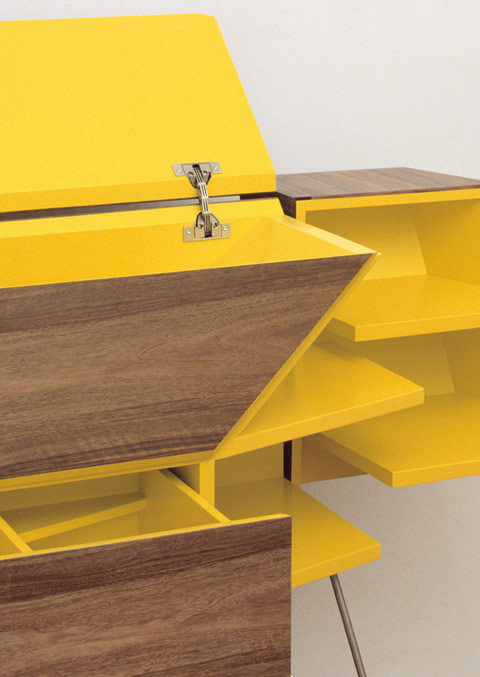 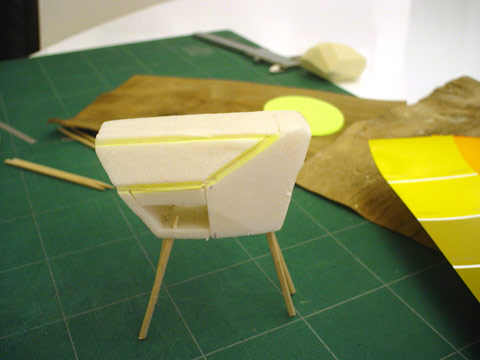 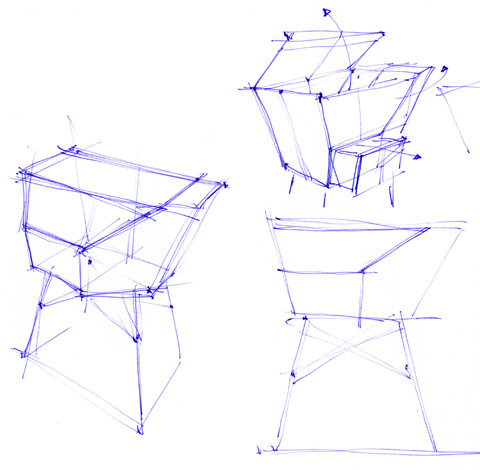