Residential life is by no means a God-given, and designing your interior certainly an art. And that applies quite literally from the ceiling to the floor. Which no longer remains a barren, largely undesigned surface on which you can place items of furniture. Gone are not only the days of tedious dingy carpets. Things are also happening in the realm of other floor coverings, too. Since the across-the-board return of residential parquet it may have seemed as if the latter were firmly and invariably bound up with a life style that by means of the natural materials prioritized distinction and longevity. For parquet brings a bit of nature into the home, with all the aesthetic consequences. Laminate floors have always been suspected of merely being imitations, that brought nature into the home not in reality but as ornamentality. Parador has dared to sidestep the dilemma, and alongside a few new classical wood parquet products it is now also presenting an especially striking attempt to break out of the traditional mindset.

The trend to upgrade products by having famed designers create special editions has thus also entered the world of laminate floor coverings. In the form of "Parador Identity", using a digital printing platform the company offers corporates, architects and designers the opportunity to realize their own prime-quality laminate ideas - if they are willing to order at least 500 sq.m. And a lot more besides.

Vorwerk attempted over a decade ago in the realm of carpeting with its "Kunst der Gegenwart: First Edition" collection to offer a new approach, and persuaded famous artists, architects and designers such as Roy Lichtenstein, David Hockney, Norman Foster, Arata Isozaki, Jean Nouvel, Gerhard Richter, Zaha Hadid, Sol LeWitt, Matteo Thun and Mimmo Paladino to take part. And Parador is now trying the same thing for laminates, without the artists, but certainly with renowned architects and designers.

This is logical in two regards: First, if one does not wish to stay ensconced in the realm of history or new inlays (that would hardly fir current residential trends) then only laminate floors offer a link to a contemporary aesthetic, and second the material (often decried as mere imitation wood) has great potential for introducing not only patterns and colors, but aesthetic distinction into public or private rooms.

"Laminate Edition 1" will introduce designs by Jean Marie Massaud, Ben van Berkel, Karim Raschid, Konstantin Grcic, Matteo Thun and Ora Ito, all of them resounding names in contemporary architecture or design. Parador's wooden parquet floors foreground the aspect of a close-to-nature, luxurious joie de vivre - and it is expanding this in January 2009 to include floor boards suitable for outdoor use on patios and in gardens, the "Classic 7020". By contrast, "Laminat Edition 1" takes the opposite tack, and presents decors that are deliberately artificial in tone or play with the notion of wood grains.

While Konstantin Grcic rejects any notion of imitation and in his designs - "Sunray" and "Monochrome" - he combines individual areas, each dyed in a pastel hue and differing in terms of brightness, Matteo Thun returns to the theme of "imitation". "Wood Memory 1" and "Wood Memory 2" are (here with various shades of gray, there with a more expressive contrast of yellow/green base and black grain) consciously artificial ornaments that may bring wood to mind and do so not only in terms of the material, but also in terms of the shape and colors, which are not wooden. Ora Ito opts firmly for line patterns such as could be realized as decoration on another material.

This is also true, if in a completely different way, of the designs created by Jean Marie Massaud, which he has called "Aleph" and "AGTC", thus imbuing with meaning. "Aleph" consists of a techy network made up of irregular pentagons, which, when superimposed create an illusion of depth, and the word "Aleph" alludes to the short story of the same name by Jorge Luis Borges, where it designates a place where, "all places in the globe" come together without mixing. "AGTC" is made up of bright, serially arranged rectangles, similar to slotted holes, all in various green tones - and the name refers to DNA's molecular structure of DNA, and to the presentation of iterative genetic sequences.

Karim Rashid takes a completely different approach. He simply repeats with free floral ("Orgo") and geometric ("Senses") patterns his well-known version of Neo-Pop. Fra more consistent by comparison the aesthetic agenda set by Ben van Berkel, oscillating between imitation and artificiality, challenging the perception. "Silksquares" consist of silvery shimmering surfaces reminiscent of silk that seem to undulate or float. "Driftwood" be y contrast, evokes the feel of wood in a profound and refined way. Thus, the floor seems to have endlessly long and thin strips of veneer or thin slats running across it, allowing your gaze to drift as well.

In this way, Parador's "Laminate Edition 1" goes beyond the bounds of a material whose career is evidently only just taking off. 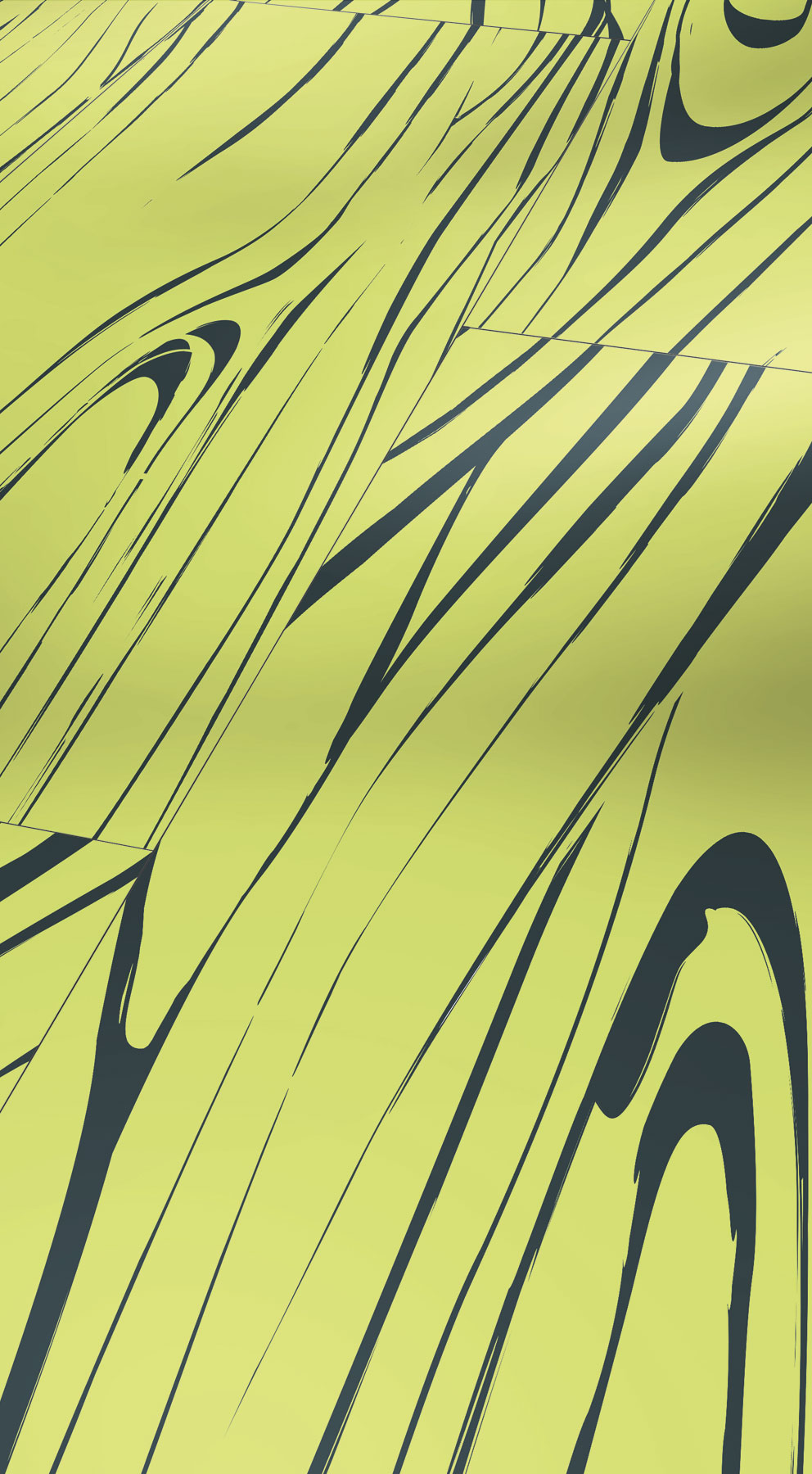 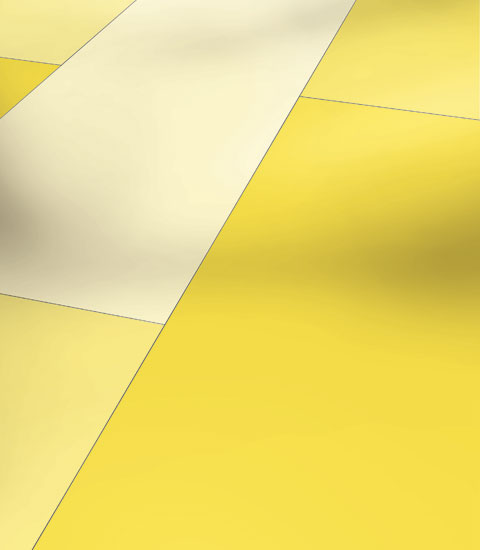 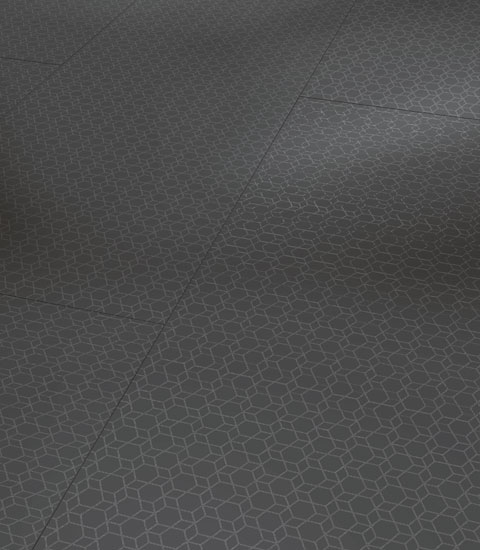 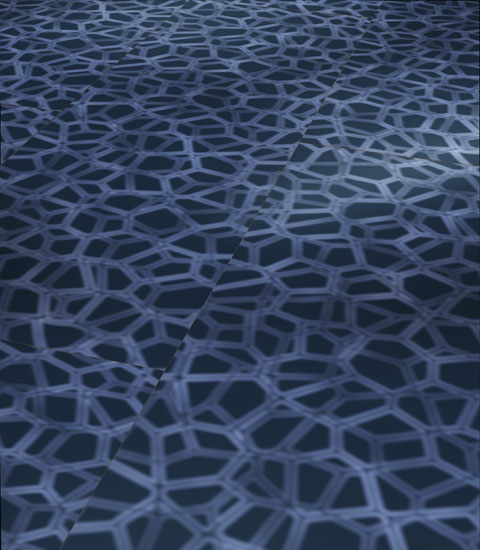 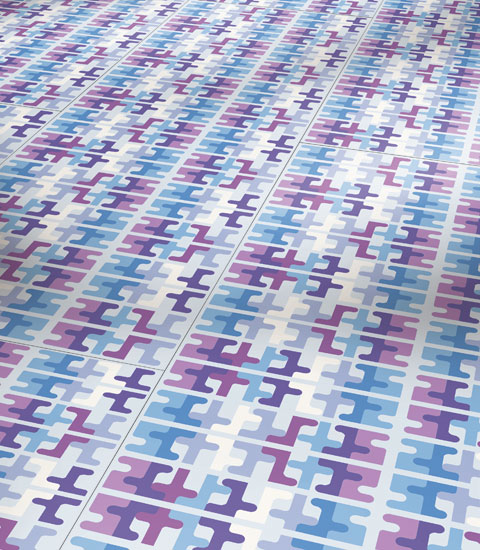 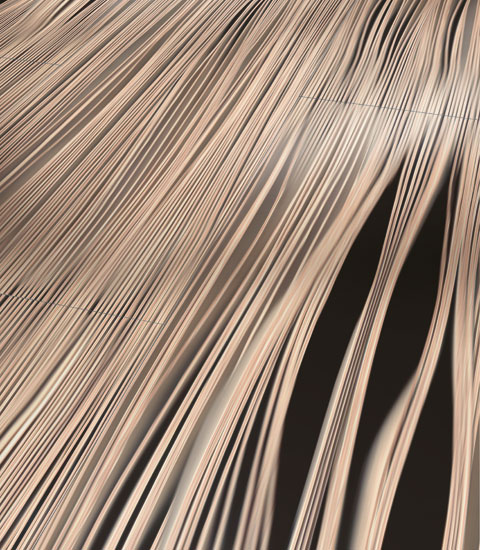 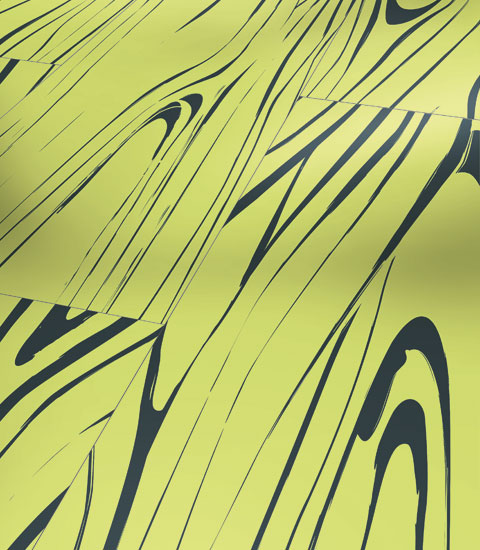 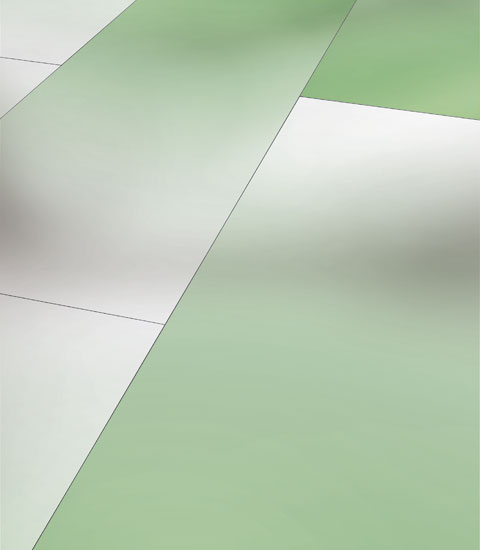 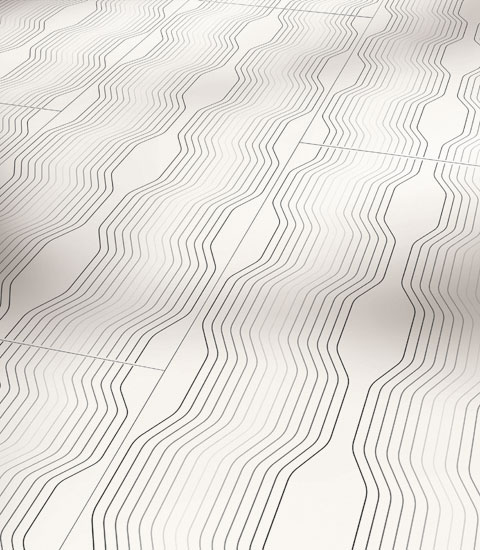 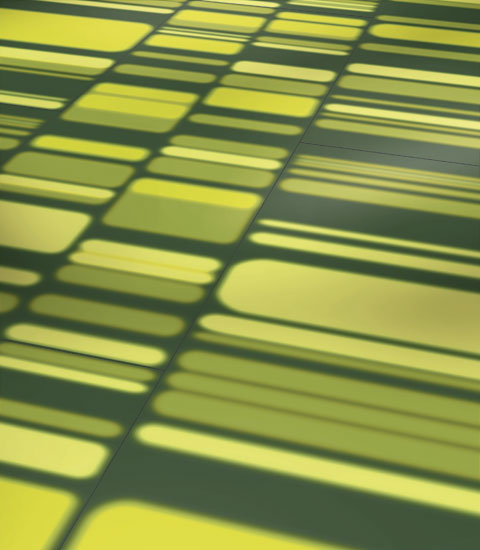 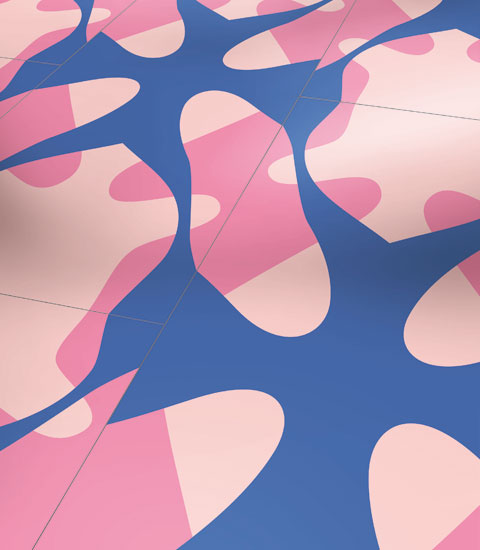 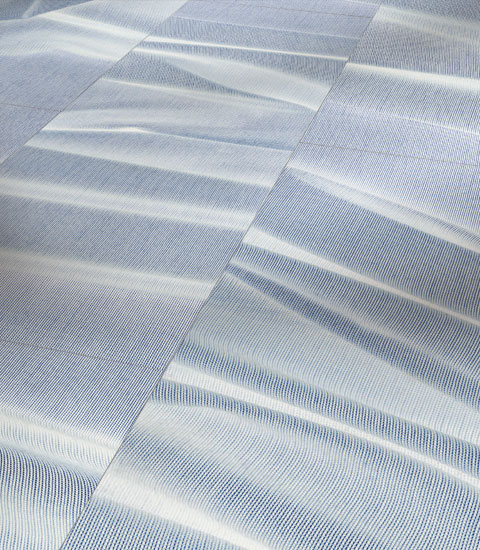 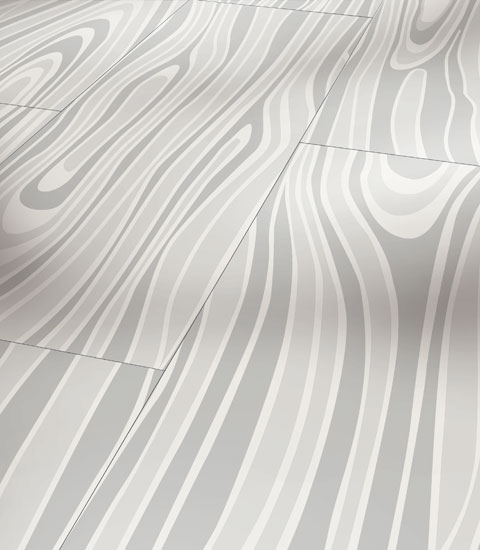