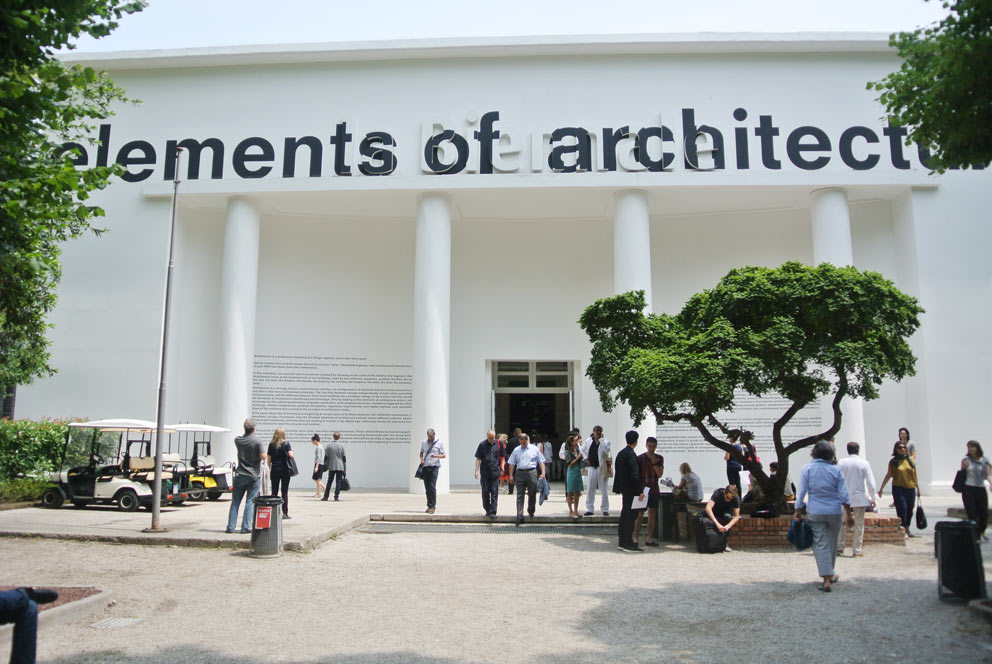 An encyclopedia of a show “Elements of Architecture” in the Padiglione Centrale in the Giardini. Photo © Thomas Wagner

Destiny remains a fickle animal even if its name has changed in modern times and it now answers to “reception” or “media echo”. Often it is the unpredictable or unpredicted that eventually decides whether something is just built soundly or is perceived as being successful. This applies in general to architecture and art, and especially to the major attention-grabbing and entertainment engines, such as the large-scale exhibition events of today. Which should not be read to mean that Rem Koolhaas only has the powers of chance to thank for the fact that the 14th Architecture Biennale he has directed has become an exciting and multi-faceted affair that asks many stimulating and pressing questions.

There are above all three reasons why Rem Koolhaas has succeeded in assembling and staging an architecture biennial that pleasantly differs from the generally vain and vainglorious self-presentations of the international star architects. As the success draws not only on the wealth of historical materials that Koolhaas and his team has unearthed and how skilfully they have presented these troves, but also on what they have chosen to omit.

First of all, Koolhaas has actually kept to what he ordained beforehand: The Biennale really does focus on architecture in all its aspects, but not on architects, and most definitely not on the stars of the scene and their vanities. Secondly, his courage and chutzpah have paid off in not leaving what is on show in the national pavilions in the Giardini, the Arsenale and the city entirely in the hands of chance. And thirdly, what played into the hands of his concept was that the Biennale organizers rejected his wish to leave the expansive halls of the Arsenale out of bounds this time. Added to which, the powers of destiny evidently also looked down benevolently on Rem Koolhaas.

Koolhaas was smart enough to let what could not be planned, let alone controlled, simply happen intuitively. It thus proved to be a stroke of good fortune for the project entitled “Fundamentals” that the topic of “Absorbing Modernity 1914 – 2014” was delegated to the country pavilions. What could have seemed paternalistic, has on the contrary let a whole seedbed of different blooms flourish. Whereby the Modernist plants have drawn additional sustenance and critical prospects from both the encyclopedia of a show on the “Elements of Architecture” which Koolhaas has paraded in the Padiglione Centrale in the Giardini, and from the “Monditalia” exhibition, assembled by Ippolito Pestellini Laparelli, a member of Koolhaas’ AMO research team and presented in the Arsenale. 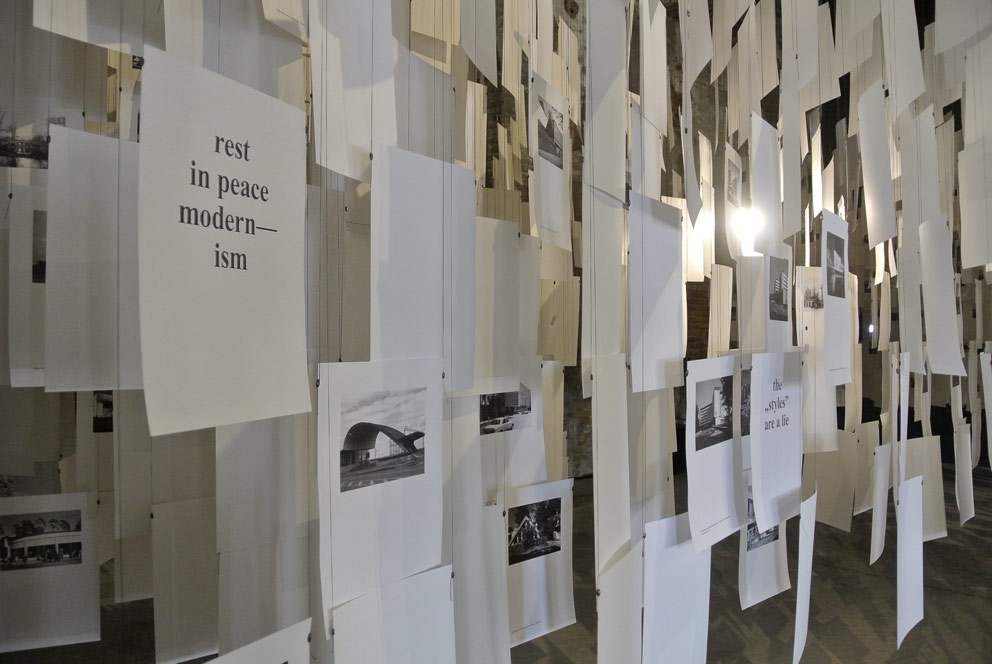 "Unwritten" is the title of the installation of the Latvian pavilion. Photo © Thomas Wagner

Was Modernism a blessing or a curse? What did it change and achieve? And where do we stand today, if we look back not cursorily but specifically on developments over the last century? It was a masterful coup not to focus on a central, thematic show and instead set a direction for the preferences in the national pavilions in the form of a common topic – or at least suggest one. In the form of “Absorbing Modernity 1914 – 2014”, ardent and assiduous Enlightener Koolhaas did indeed pose the central question, but he did not influence how it was then approached. The perspectives on it were thus broadened thanks to being largely removed from the control of some central agency known as the “curator”. No one who has seen this Biennale will still be able to claim that there is some monolithic “Modernism”. Rather, we see modernity in all its facets here. As if in a kaleidoscope, itself the product of the decay in the 18th and 19th century of metaphysical bonds and the concomitant deregulation that set in, it disintegrates into national and local developments, adaptations and heretic currents. Never before has a Biennale contributed so strongly to giving us a differentiated view of history.

Modernity’s glory and misery stand side by side. It remains a difficult and astonishingly many-sided heritage, as can be seen not just from the American, British, French, Japanese and Russian pavilions. And light is even shed on the periphery, for example Africa and North Canada. The main evils of the epoch, such as imperialism, nationalism, extremism, and a form of fundamentalism that permeated reality at both the social and aesthetic levels, and at times violently subjugated it to its ends, certainly do not get ignored. And the hopes and blessings of an entry into a new age are likewise discussed. 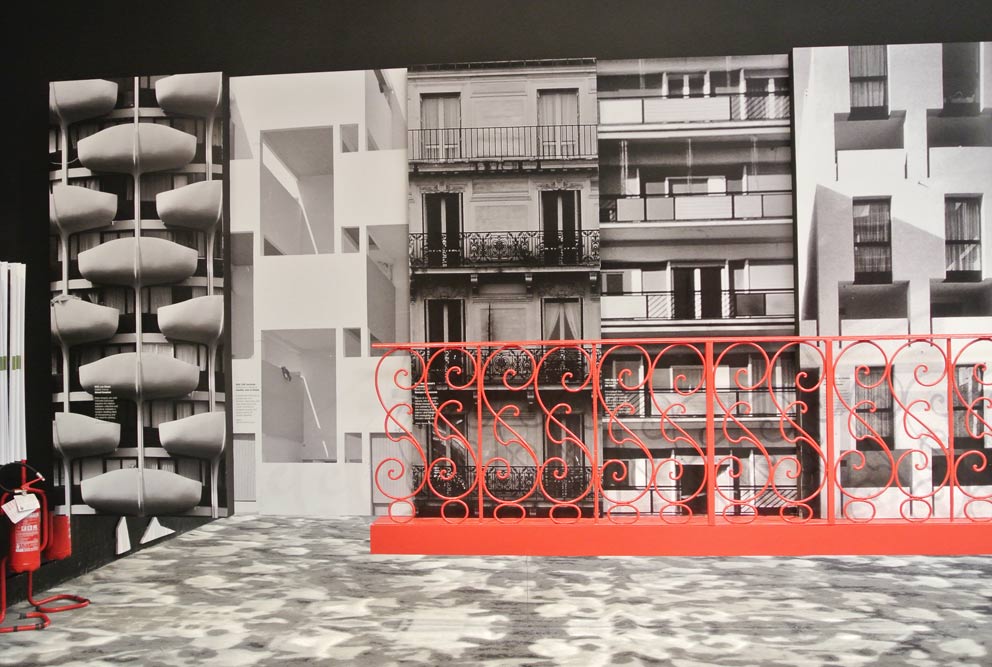 An exhibition on components: "Elements of Architecture". Photo © Thomas Wagner

This would hardly have been achieved solely by focusing on the elements of architecture and their history. Because however assiduously Koolhaas spreads out before us all sorts of interesting and exciting things to do with roofs, walls, doors and stairs, balconies, floors and corridors in the central pavilion in the Giardini, all of it hardly seems to touch the issue of what architecture is today and what it can be under present conditions. At least at first sight. However much we may be amazed by the sheer wealth of historical developments underlying each “element” as compiled by the countless teams and groups of researchers, Koolhaas is clearly himself acting the Modernist here. And for all the diversity of the parts manages to neglect the (political) context. In this intellectually pimped DIY store replete in “micro-narratives” nothing blends to form a whole. But Koolhaas would not be the intellectual player he is, were he not to be aware of the fact. The trick thus involves showing that the foundations of the present reach back across the individual elements and more than 2,500 years of architectural history and thus far behind Modernity, undermining the latter’s all-pervasive claims and fitting it as a matter of course into a lineage of different epochs. Here, as with the national pavilions, it becomes quite manifest that there is not just one history of architecture, but many. And anyone setting out to tell their stories in detail has to step beyond any Modernist ideologies to do so.

Perhaps this is why we repeatedly get the feeling that Koolhaas the sceptic is looking back and celebrating one long farewell. A farewell to the building as a whole, and from the architect as the master-builder who commands the elements and decides which to use. A farewell to the powerful individual who can fuse all the parts and elements to form a magnum opus. At in the final instance the lesson taught is a melancholy one: Once Modernity has bid goodbye to all that all that remains is to soberly assert that today it is highly-specialized technological systems and complex discourses that decide what is possible in architecture – and what is not. For all his ingenuity, fascinated by the power and potential of increasingly standardized systems of building Koolhaas seems to have forgotten one thing, namely the power of the economy and the regulations, the focus of investors and the shackles of norms. Is architecture today possibly twice ensnared – in a network of historical references and high-tech systems, whose strongest links were forged by Modernism? From local to national to international and to global building, from the singular building to the standardized living machine, is that the precipitous path that leads from Modernism into the present? Whatever the answer one might prefer, Rem Koolhaas has managed to emphasize the urgency of the issues. 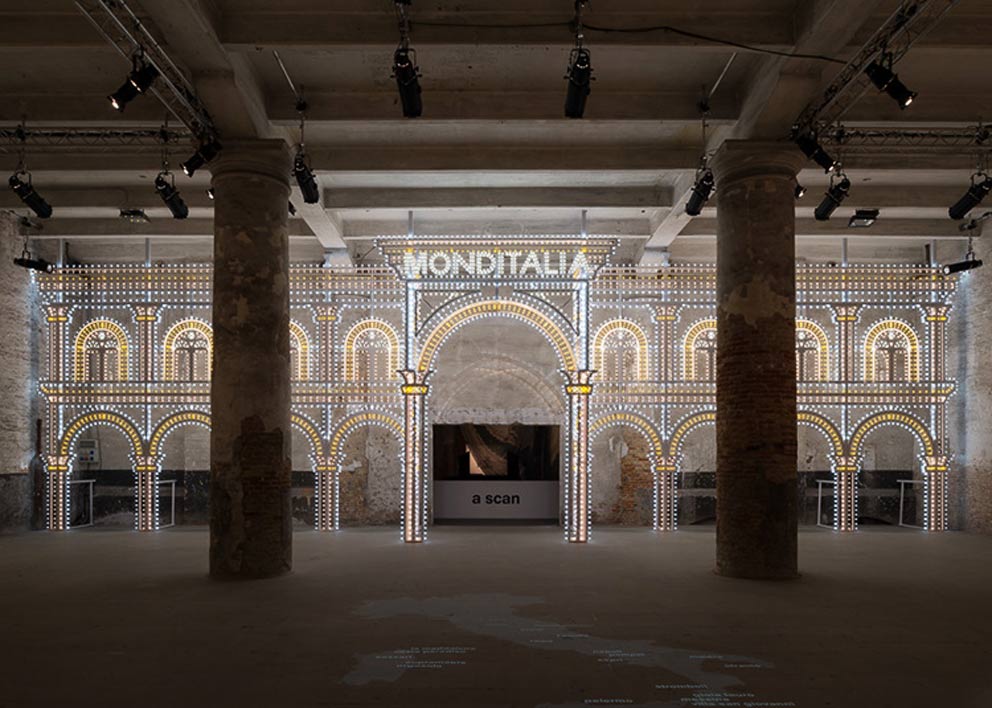 There are two sides to “Monditalia”, the exhibition that shines the spotlight on the biennial’s host country and uses it as an example. For as much as the idea itself is to be commended, regrettably the result is fuzzy and blurred. On the one hand, research projects serve to illustrate the pitfalls that are looming in architectural policy, on the other film clips and dance performances present a country that is full of contradictions. Prompting us to ask ourselves: Is the rest of the world really just like Italy? Or does the future not instead follow the path suggested by the neon writing that embellishes the rear exit of the Russian pavilion, which reads: “Russia’s Past Our Present”?

On balance we can say: Rem Koolhaas has succeeded in staging a truly outstanding biennial. Call it fate, providence or coincidence, one thing is certain: Koolhaas’ smart “setting” is the decisive factor that ensures that the result is more than the sum of many disparate parts. In a way it’s like constructing a successful building. It is above all in the kaleidoscope of the national pavilions that architectural Modernity loses its monolithic nature and instead becomes comprehensible in its many facets and ambivalent qualities. Painting a realistic image of an epoch that has more to offer than concrete jungles, an epoch that will challenge us intellectually for a considerable time to come. In the historical microcosm of the “Elements of Architecture” their significance is placed in proportion. On the other hand, the trend towards the differentiation and standardization of single components reveals what we need to watch out for if we want to prevent modern architecture from becoming a pawn of technological innovation. If we are intent on mastering the future, it will simply not suffice to cherish with a nonchalance and melancholy that is so typically Koolhaas the wealth of architectural history in each of its elements, including subtleties and atmospheres, scents and fragrances, hopes and disappointments. Instead, we will need to raise the very questions that the Dutch master thinker has curiously decided to omit: the question of power and politics.