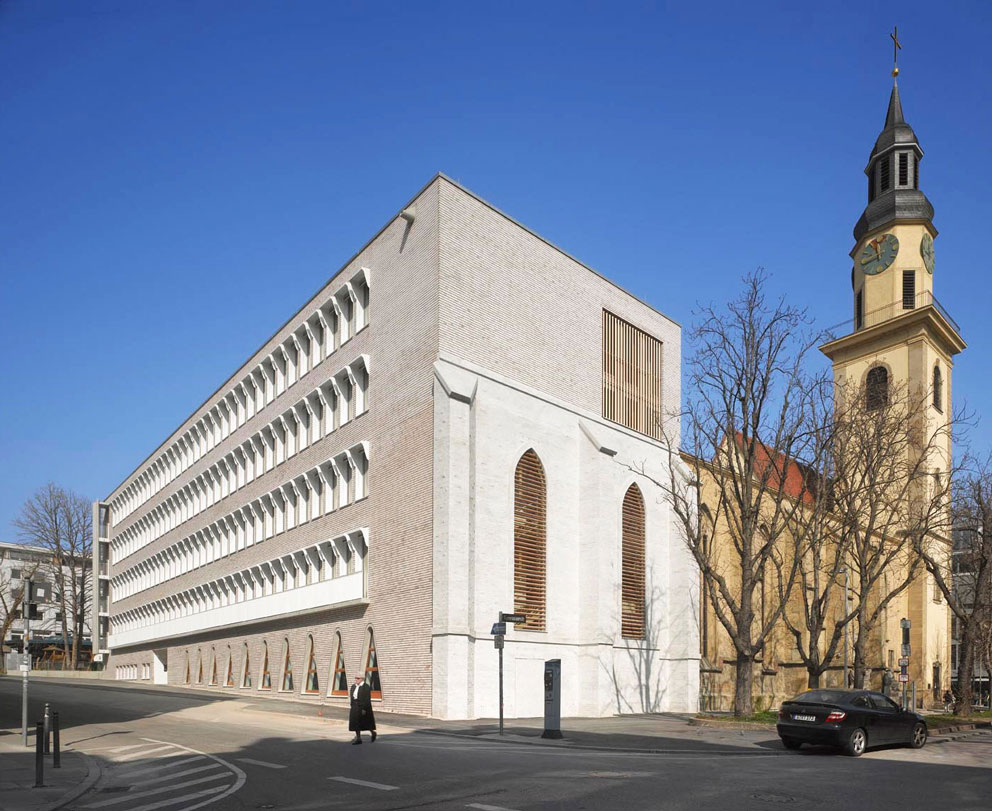 From the church of Hospitalhof in Stuttgart, which belonged to a Dominican monastery, exist only the rebuilt choir and the southern wall of the nave. Photo © Roland Halbe

Hospitalhof is the central educational institution of the Protestant Church in Stuttgart. Before its transformation, the Church was no longer happy with the functioning of the old buildings (an administrative block, a hall including two auditoria plus a connecting structure); the technology in particular of the venue area was clearly out of date. Plus there was a wish for buildings that exuded a stronger presence than the modest post-War structures were able to offer. The competition brief for the modernization of Hospitalhof left it up to the participants to decide whether to approach the assignment “retaining existing (parts of) buildings or opting to build anew”. A proposal was expected that could be realized in two stages. The architects at Lederer Ragnarsdóttir Oei (LRO) did not comply with this, but instead called for the demolition of the entire post-War ensemble, including the administration building, which the brief had excluded in the first phase.

The proposal made by LRO Architekten to erect the new building in a single construction phase convinced the jury and the client alike. For it meant that the two formerly separate buildings could be consolidated to create a single harmonious structure. Above all, this strategy allowed for a more sensible interior layout: The community, seminar and meeting rooms are now arranged on the ground floor around the L-shaped foyer, whose glass façade facing the courtyard can be opened. Mind you, anyone who is familiar with LRO Architekten will know that a complete makeover was always the preferred option – the firm has never much respected post-War modernism. That the architects declared in the press release that 1950s and 1960s architecture was no better or worse than today’s built output is to be understood as anticipatory appeasement.

nce stood the pillars of the nave. Drawings © LRO Architekten

The public widely welcomes the plans for a new building. This is understandable considering that the quarter in which it will be located for a long time suffered from a kind of backyard appeal – despite its central downtown location and rich history. Nevertheless, most recent trends saw marked enhancements – new hospitality outlets, a local arts stage springing up here, and the new Hospitalhof has now added an attractive building to the district.

The church at Hospitalhof was one of the three major Gothic churches in Stuttgart. Part of a Dominican monastery, which following its secularization served as a hospital as early as the 16th century, it lends the quarter and the church its present name. In its immediate vicinity there was a synagogue, which was destroyed in 1938. Even prior to World War II the quarter lost its importance; as early as the 19th century the monastery had been turned into a jail, some of whose inmates were deported to concentration camps in Nazi Germany. By the time the War was over the majority of the quarter’s buildings had fallen victim to air raids. The only remains of the erstwhile church building to have survived are the restored chancel and the southern wall of the nave.

The new building by LRO Architekten takes up the structure of the old monastery and is slightly out of line with the remaining grid of the quarter. The new administration building docks on to the church nave and completes it with slurry-coated bricks. The interior courtyard now has trees growing where the columns of the nave once stood.

In view of the current debate about the energy that is bound in existing buildings, the placating rhetoric as regards post-War architecture is as understandable as it is evidently of a strategic nature. That the architects also rely on history in their argument is, however, to be expected only at first glance. Those not aware that Arno Lederer is deeply versed in architectural history would swiftly harbor a sneaking suspicion that his reference to the historical context was a strategy of persuasion destined to safeguard against criticism. And yet, you can never do justice to history by destroying its testimonials. On the other hand, demolishing a building may be the correct choice provided the reason for doing so is the superb quality of what replaces it – as is the case here. What is annoying, however, is that a fundamental asset to the anatomy of the city, which is based on historical reference, has been given away so lightly: The opening of the streetscape at the southern end of Gymnasiumstrasse has not been creatively enhanced, instead the newly gained space is plainly tarmacked, the entrance to the administrative wing hardly recognizable, and there is no obvious link to the interior courtyard of the complex. The courtyard, a coherent recreation of a cloister, is accessed via the set-back roofed main entrance in the north, a successful marriage of the public space and the protected courtyard in terms of both its position and design. 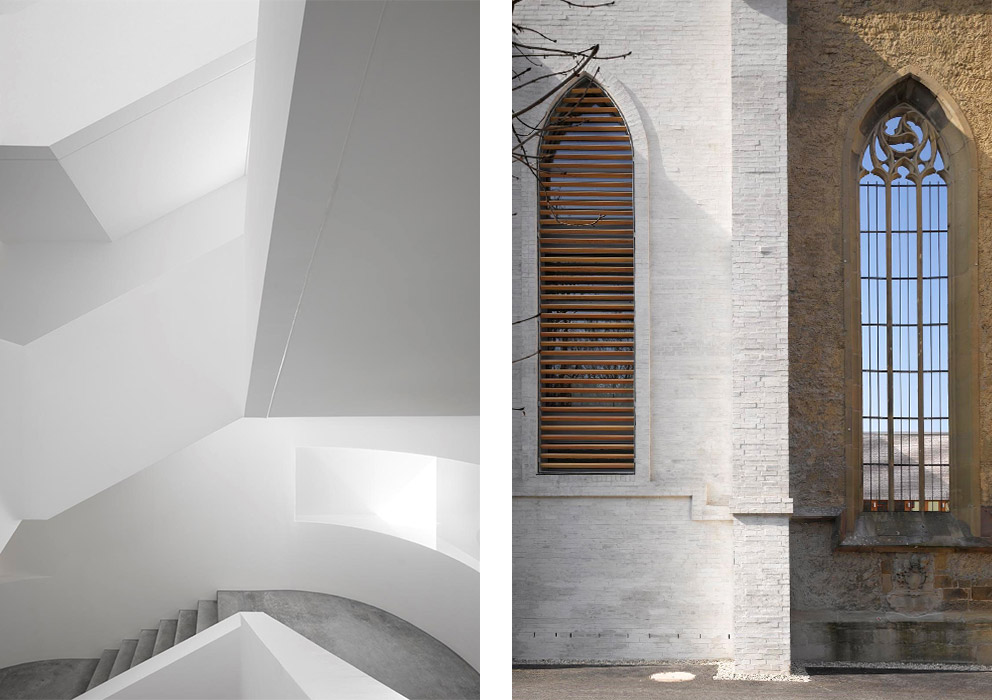 Where the administration building docks onto the wall of the nave, the historic facade is plastered white. In the upper area where the new building projects beyond the stock wall, the facade is complemented with gray-washed brick. Photo © Roland Halbe

The building itself, in contrast, is not by any means historical in a stylistic sense. Just as it does not seek to present itself as decidedly contemporary. Clad in light-colored bricks, the structure is embellished with playful solitaire elements both inside and outside, which were crafted with an obvious love for detail, each following their own logic. Facing out over Büchsenstrasse are glazed oriels with seating outside the main auditorium. The round openings, which have been outfitted with circular concrete segments for shading in the west, form the rear of the main auditorium; inside they can be closed with shutters, meaning that the stage can be illuminated with daylight in different intensities. Hoods above the windows protect against the sun, keep the sunblinds from damage when pulled in and enable the windows to be tilted even when it is raining. Originality in the form and sensible reasoning in the function combine to form a harmonious whole, except for the arched, downward-widening windows, whose functional message is difficult to discern. The coherence produced by way of cubature and material is broken up by a plethora of individual formal solutions, causing confusion.

The interior is equally characterized by diligent craftsmanship, featuring few select materials, wood, concrete, white walls, colored linoleum flooring, attesting to an excellent feel for space and creating perfect individual settings. The design culminates in the main auditorium, complete with a gallery and a convex skylight that extends upwards between the stage and the gallery. The timber slat construction beneath it diffuses the light to create a pleasant atmosphere. The interior boasts plenty of details that advertise the architects’ pronounced sense of formal pertinacity and defy any need for explanation. Just as if the details were destined to proclaim architecture’s right to have a logic of its own, which resists all description and explanation, keen to emphasize that architecture is not only about meeting functional requirements and keeping to the time and cost schedules. And even if the architects succeeded in delivering on such expectations, it is important to note that these conditions alone will not suffice to produce good architecture. At the Stuttgart Hospitalhof this stance is displayed just a tad too flagrantly. 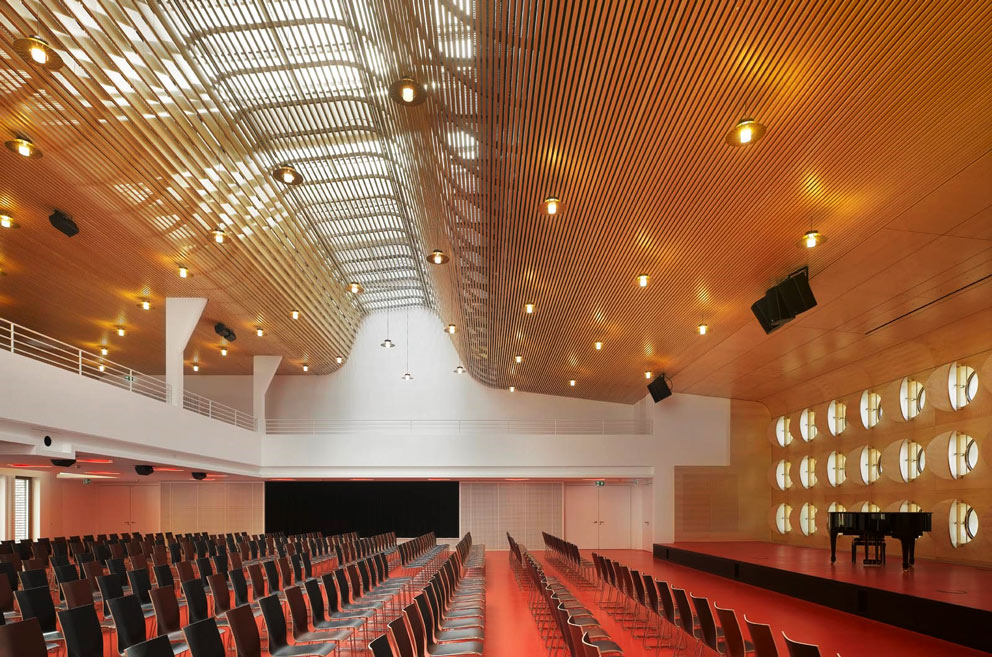 In the back of the large lecture hall round apertures are inserted, which are shielded on the outside with circular segments of concrete. Photo © Roland Halbe
Advertisement