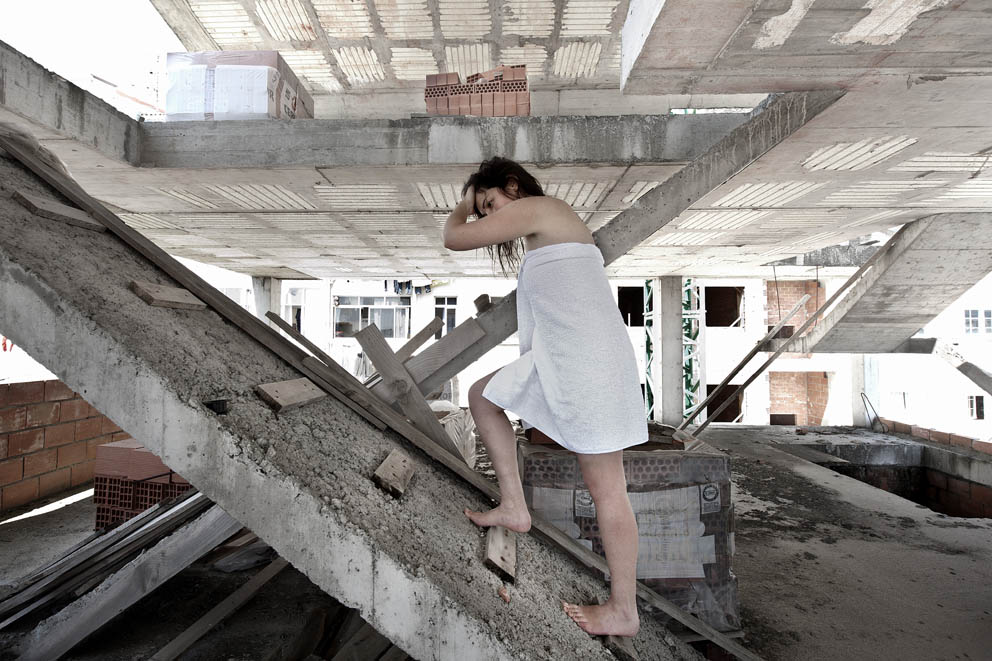 Simple and concise, “Unfinished” is the title of the exhibition at the Spanish Pavilion, which was awarded the Golden Lion for the best national entry. Bemoaning that a project has been completed and there is little left to do therefore seems out of place here from the outset. Indeed is not a sense of lightheartedness and dignity not a better way to face the numerous architectural jewels left scattered round the country(side) and those that are yet to come. In thematic terms, everything that is shown and said on the matter here references unfinished, stagnant, ruined, abandoned or idle churches, monasteries, palaces, factories, workshops, homes, swimming pools and cinemas – but not in some raw state of ever-advancing decay. Instead, what is highlighted here is far more where and how ruins and building shells can be given back a more or less glorious architectural future.

Well, there has definitely been quite an overkill in the use of the word “front” in connection with the 15th International Architecture Exhibition. Here though, it is actually in order. The impetus to put together the selection presented here of sample buildings that have been modernized, converted, restructured and thus preserved and allocated a new purpose, was not any particular discourse relating to architectural history or heritage preservation, but rather the crisis in the Spanish real estate market: It’s not hard to remember how, for many years, numerous Spaniards dreamt of wealth through property. In 2008 though, the bubble burst – and from then on out countless unfinished buildings dotted the landscape as a collective memorial to financial speculation, with no prospect of them being finished. 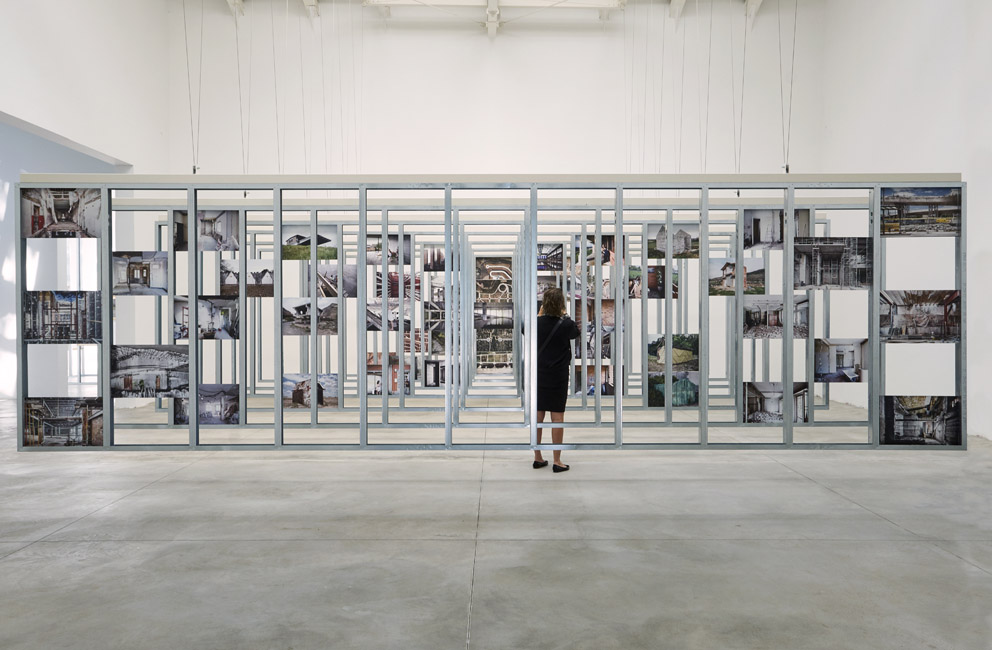 However, the two curators did not simply want to make an accusatory gesture. You could argue long and hard about whether it would have been clearer, more rigorous or indeed better to document all the empty concrete skeletons, half-finished houses and housing estates and focus on them as a sad legacy of the inglorious property boom, simply waiting to be demolished. But the decision by architects Iñaqui Carnicero and Carlos Quintáns not to simply point the finger at politicians, the banking world, the construction industry, architects and gullible developers, but rather to expand the topic beyond the crisis and draw attention to the numerous challenges that go hand in hand with the unfinished structures has proven to be the right one from the point of view of architecture.

The curators value the opportunities more than the burdens and the disaster and this in itself is a clear statement. After all, strictly speaking, despite war, destruction and the Modernist obsession with permanent renewal, there are still more old and abandoned buildings the world over than there are newly planned, recently completed ones. Regardless of how far construction work had progressed when they were abandoned, in which century they were built, how long they have already stood empty for or how piecemeal their preservation – for all these structures if they are not to be given up on entirely then a convincing concept is required to rescue them for posterity. 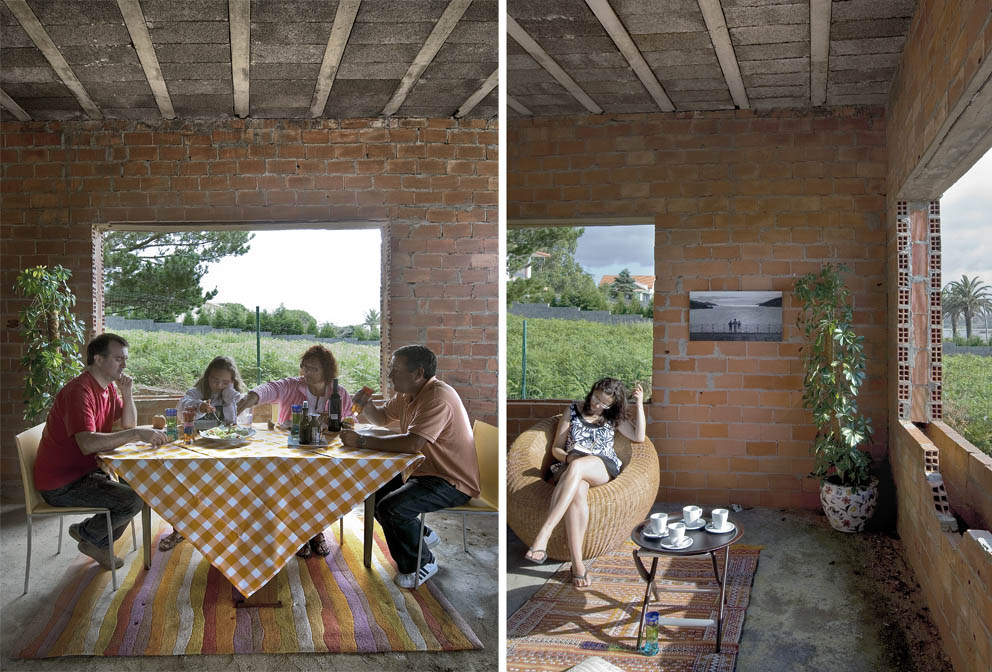 To judge by the photographs made by the Cadelas verdes collective it is quite possible to inhabit unfinished dreams, too. Photo © Cadelas verdes, Ana Amado, Marta Marcos, Luz Paz

More than 60 projects have been selected in order to provide answers here to what successful and architecturally appropriate action has been taken given the various initial circumstances. In seven photo series and eleven interviews, attention has also been drawn to various facets of the unfinished and the ruined. Moreover, the range of buildings presented covers a broad historical spectrum. It is not only current unfinished buildings that suffer the ravages of time. Thus more thought than usual has been given to how the passage of time has affected many still existing but dilapidated, essentially ruined or indeed never completed buildings – and how these can be resurrected and utilized.

The photo series initially evoke broken dreams, idle and recalcitrant structures, spaces in transition and landscapes in the process of construction. Here it is the property crisis that shines through most clearly. What you see prompts reflection on the causes of the crisis, but it certainly doesn’t stop there. Subsequently dozens of project sketches demonstrate how old ruined churches, palaces or factories can be renovated and given a function once again, without ignoring, glossing over or erasing all traces of the story of their decay.
Regardless of the size and the condition of the relevant structures, the focus is on the strategies for their preservation and repossession, and details are given of how gaps and building remains were filled in, public spaces rejuvenated, homes supplemented with new parts and adapted to their environment – or the unfinished and incomplete allowed to remain in all its nakedness. 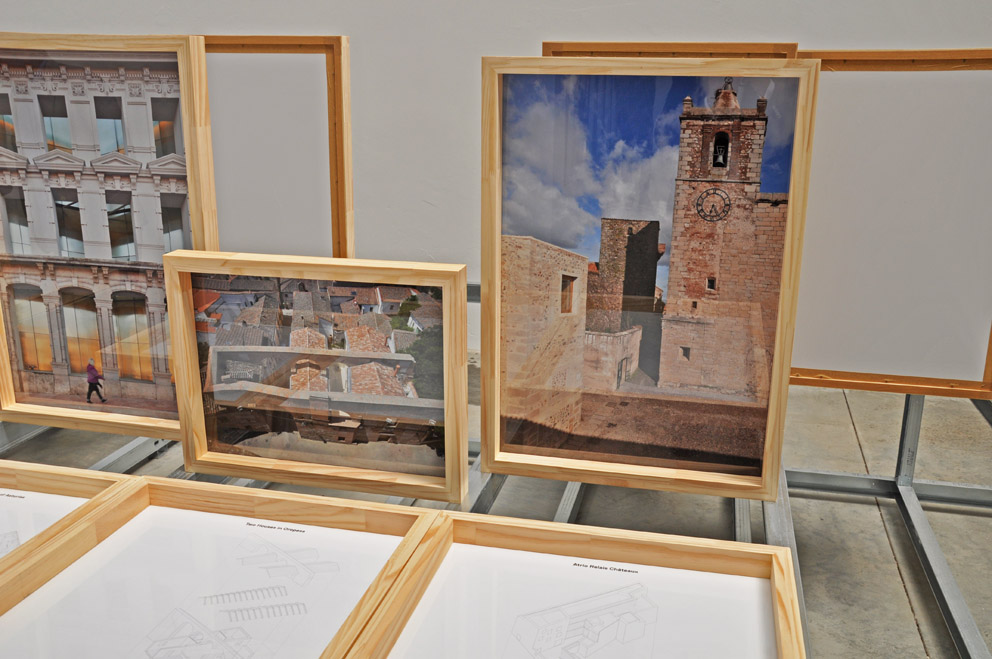 The more one examines individual properties, however, the more painful the lack of detailed information becomes: When were they built? What remained in terms of built backbone? Why did they end up derelict? What did it cost to make them usable once again? Anyone wanting to talk about how the “excesses of the past” can be countered should not rely solely on using images and a few isometric drawings and plans to present results achieved often by means of a sophisticated aesthetic of repair, as promising as this may be.

Thus the observer notes, almost in passing: There is barely a project that would not demonstrate how rough walls and unplastered brickwork can strike an architectural spark. There is no question that the unfinished gives rise to a particular style, and ruins develop a charm all of their own. Something all too self-evident comes to the foreground in both. However, it is also clear that, in the case of ruins, these are structures, as it were, that have fallen back into an unfinished state, without being dominated by the character of newness and currentness – and which can be acknowledged, further considered, converted and renewed for this reason only. The unfinished nature of them, as becomes apparent in many of the examples presented, is intricately linked with the process of history. Even where this unfolds as violently as in the case of the Spanish property crisis. Not every ruined building has as bright a future as those presented here. 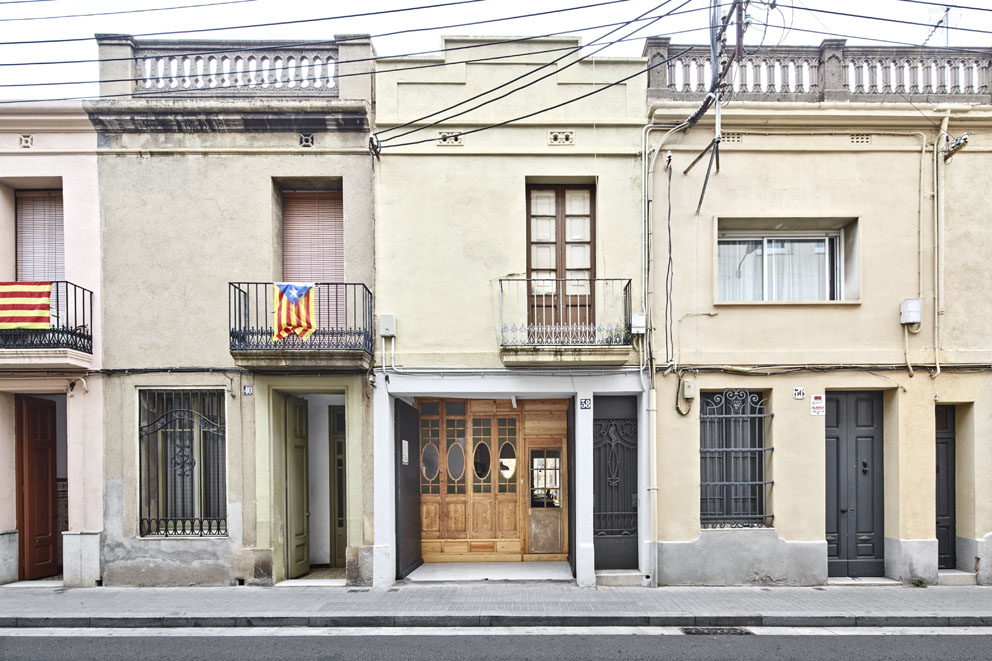 First it was a tannery that lived here, then a garage, and finally a printing company. The building was then abandoned during the financial crisis. “38 Calle Lacy” is now home to an architectural office. Photo © Sauquet Arquitectes 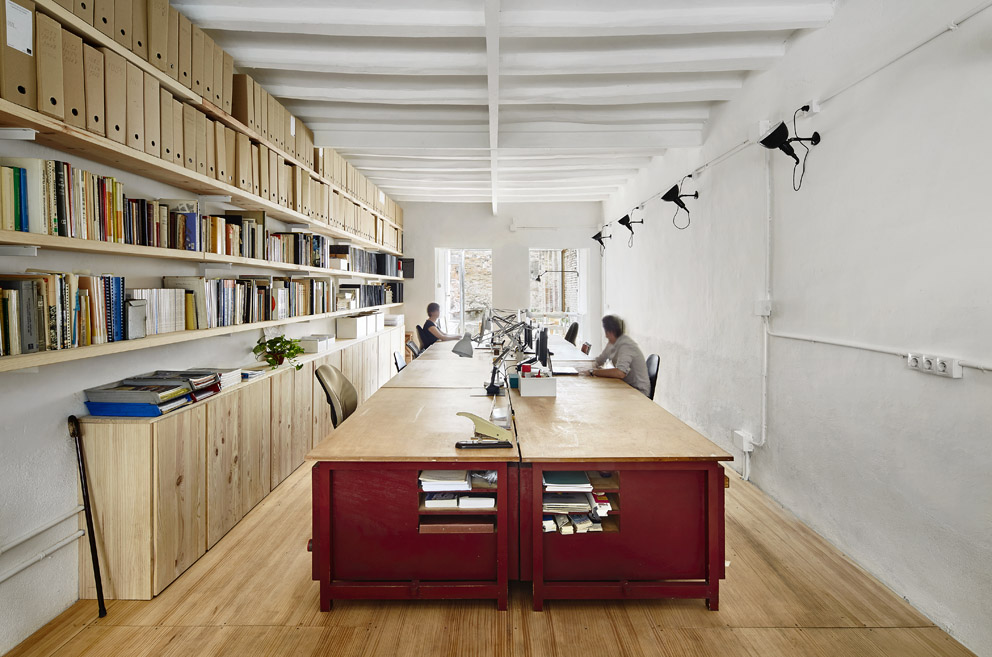 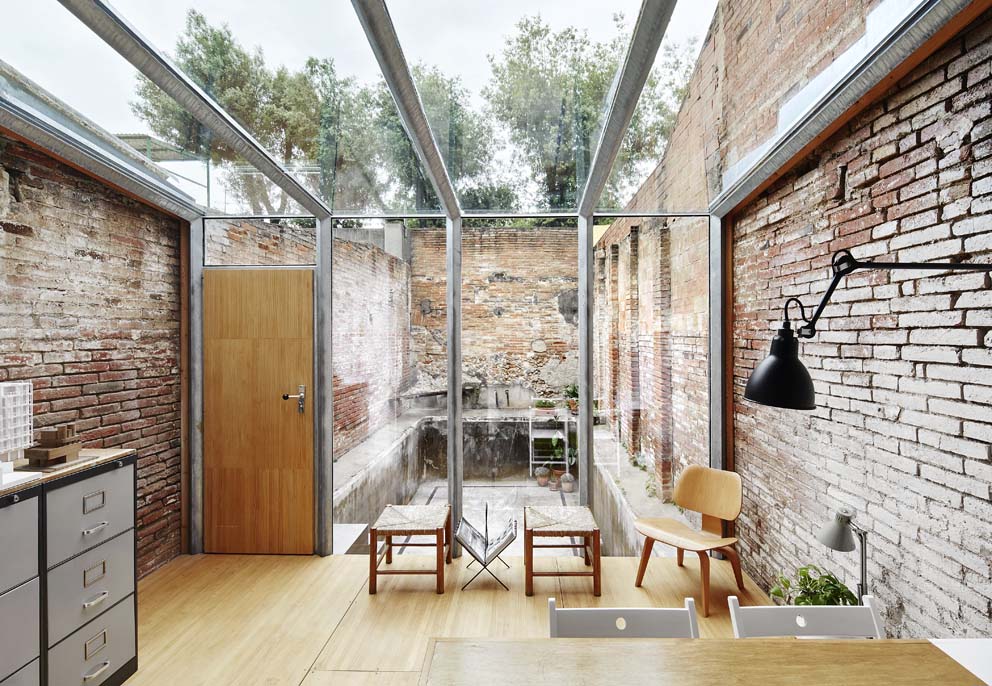 The austere charm of the unfinished: The long office room now terminates in a refined conservatory that abuts a small courtyard. Photo © Sauquet Arquitectes 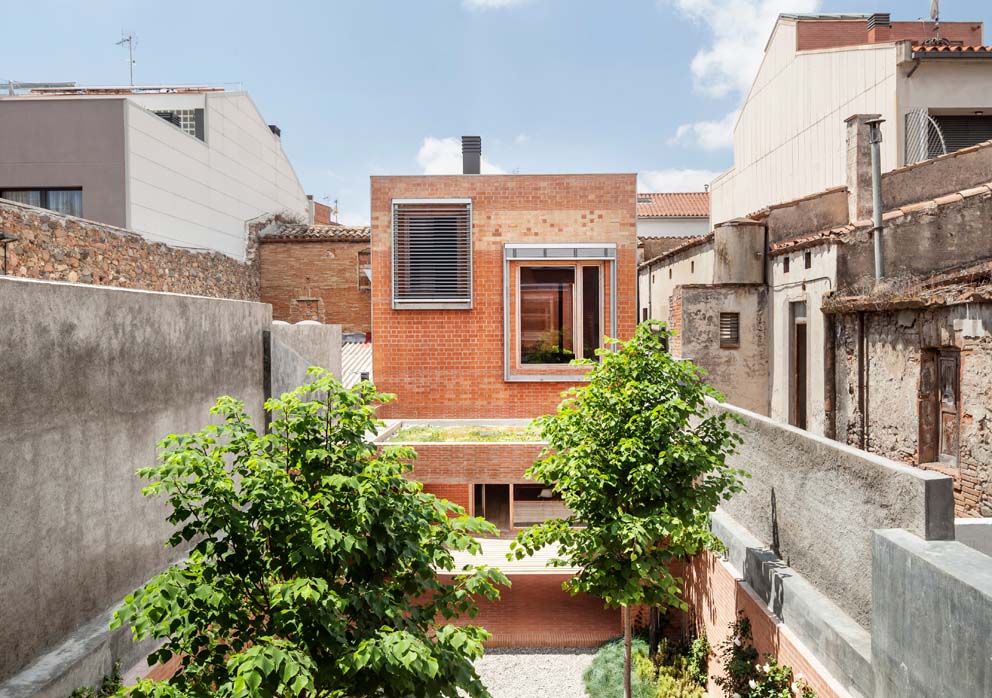 No rendering, but not unfinished: “Casa 1014” by Harquitectes consists of two separate areas and relies on a plot that is only 6.5 meters wide but very long. Photo © Adrià Goula 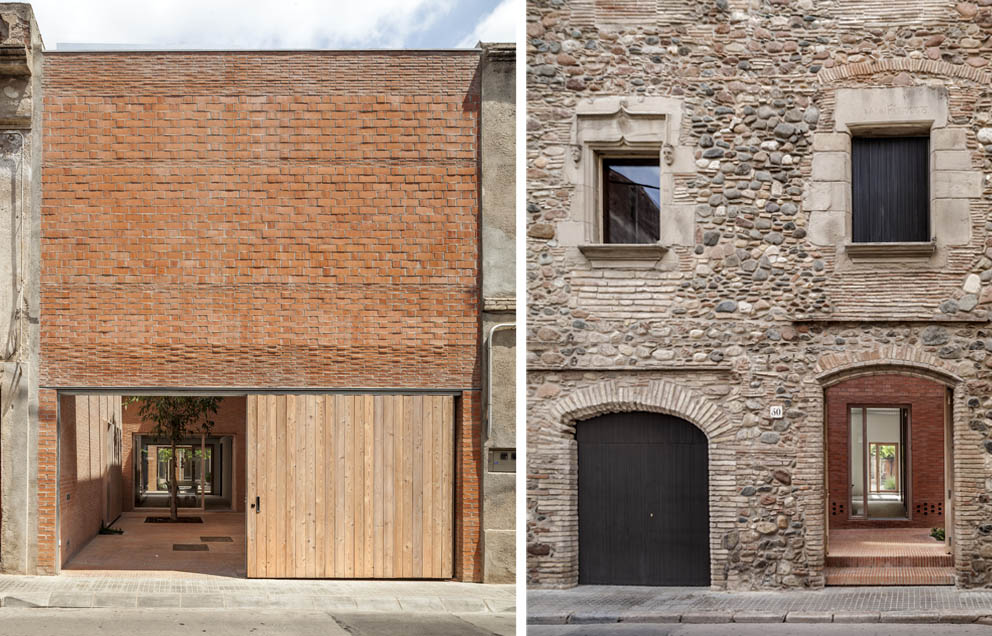 The two entrances to “Casa 1014” are located on two different streets. Only the frontage on the main road had survived. Photo © Adrià Goula 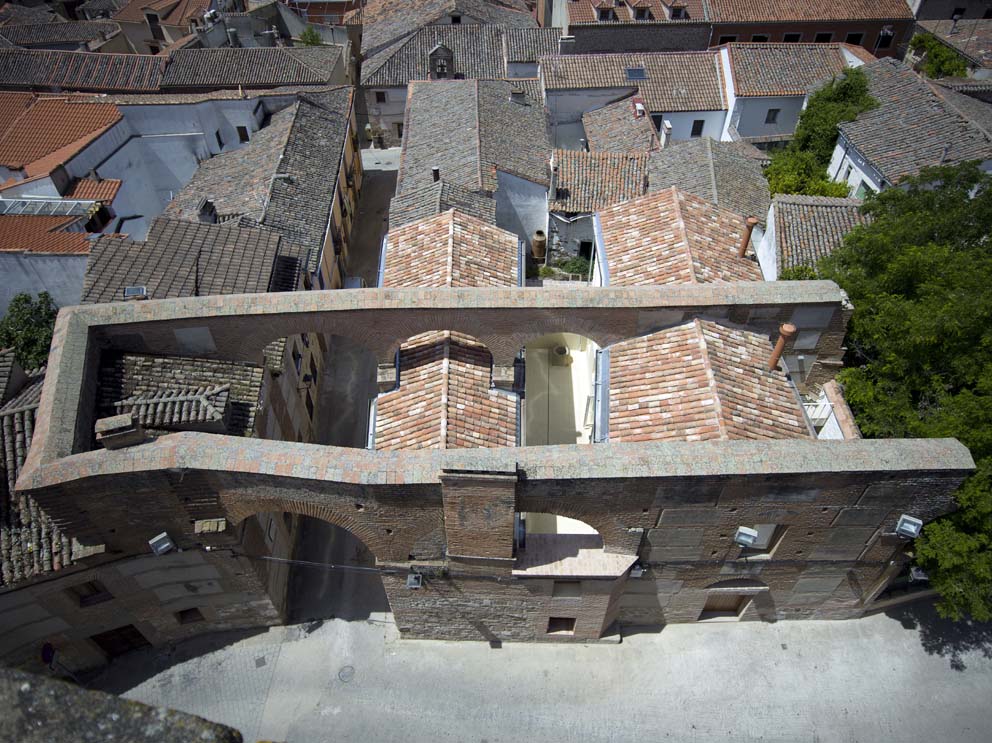 A castle was built in Oropesa in the 15th century, with the plan being to connect it to a church that had not been finished. Today, the structure consisting of arches and walls cuts right through the town. Photo © Luis Asín 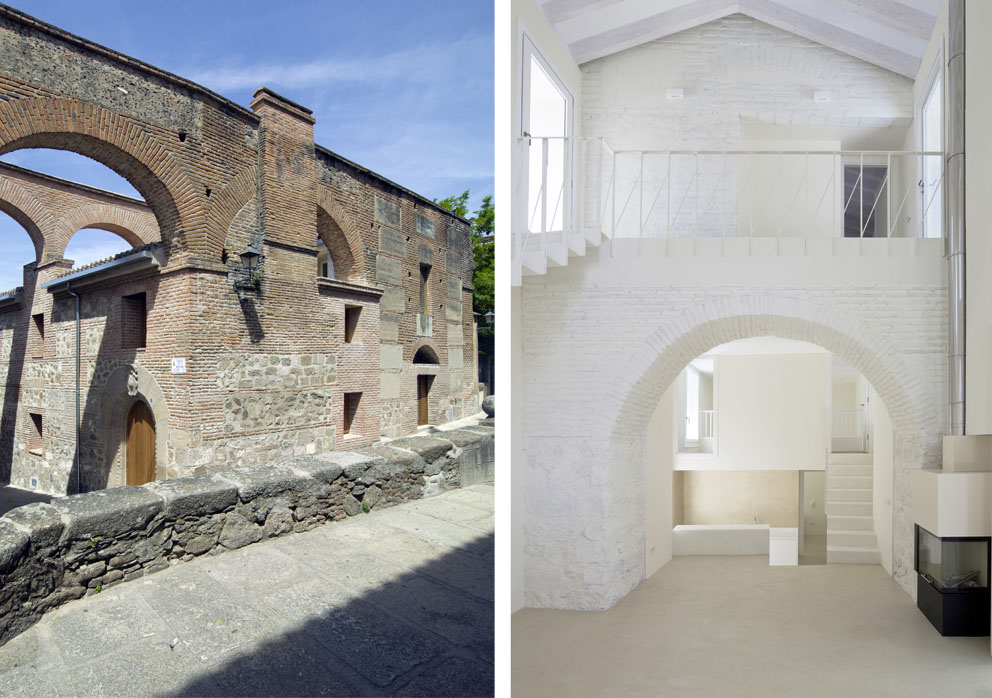 Paredes Pedrosa arquitectos have restored the two dilapidated houses in Oropese located beneath the arches and between the walls. Photo © Luis Asín 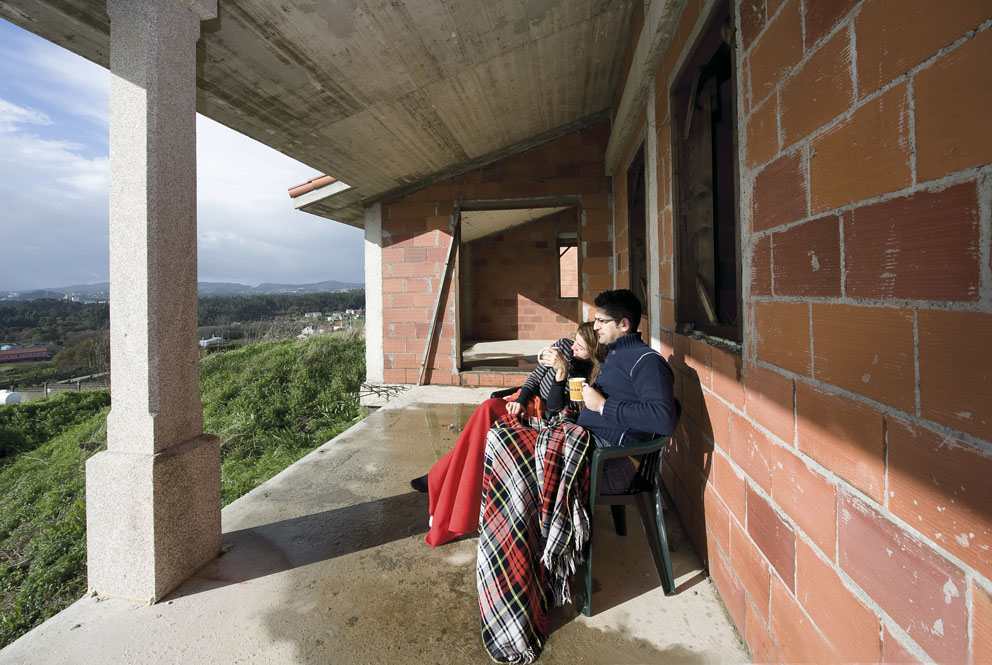 Beautiful prospects: The projects on display in the Spanish Pavilion show that one need not rest content with leaving the unfinished the way it is.
Photo © Cadelas verdes, Ana Amado, Marta Marcos, Luz Paz
Advertisement