Salone Satellite? We love it! Each year, the platform for newcomers at the Salone del Mobile brings together hopeful talents and fresh ideas. The one or other international career first took off in the two halls on the absolute edge of the trade-fair grounds. And which contributions caught our eye this year is revealed in our ten superlatives – from A for appearance to T for tablelamps.

The most appealing presentation

Young designers are per se appealing, so enthusiastically and idealistically do they go about their work, and occasionally they are refreshingly nonconformist. Especially in comparison to the manufacturers’ marketing-driven booths in the other halls. And the presentation of Verona’s Henry&Co design studio was the most appealing of them all at this year’s Salone Satellite. First there was the topic: a kitchen and bathroom module made completely of recycled and recyclable materials. Second there was the presentation itself: Henry&Co not only displayed the design, but even the making of the materials on the tiny footprint available. Crowned by a wall design that playfully alluded to heroic farmers and workers in Modern art, transforming them with joyful colors and a smile into heralds of a better life. 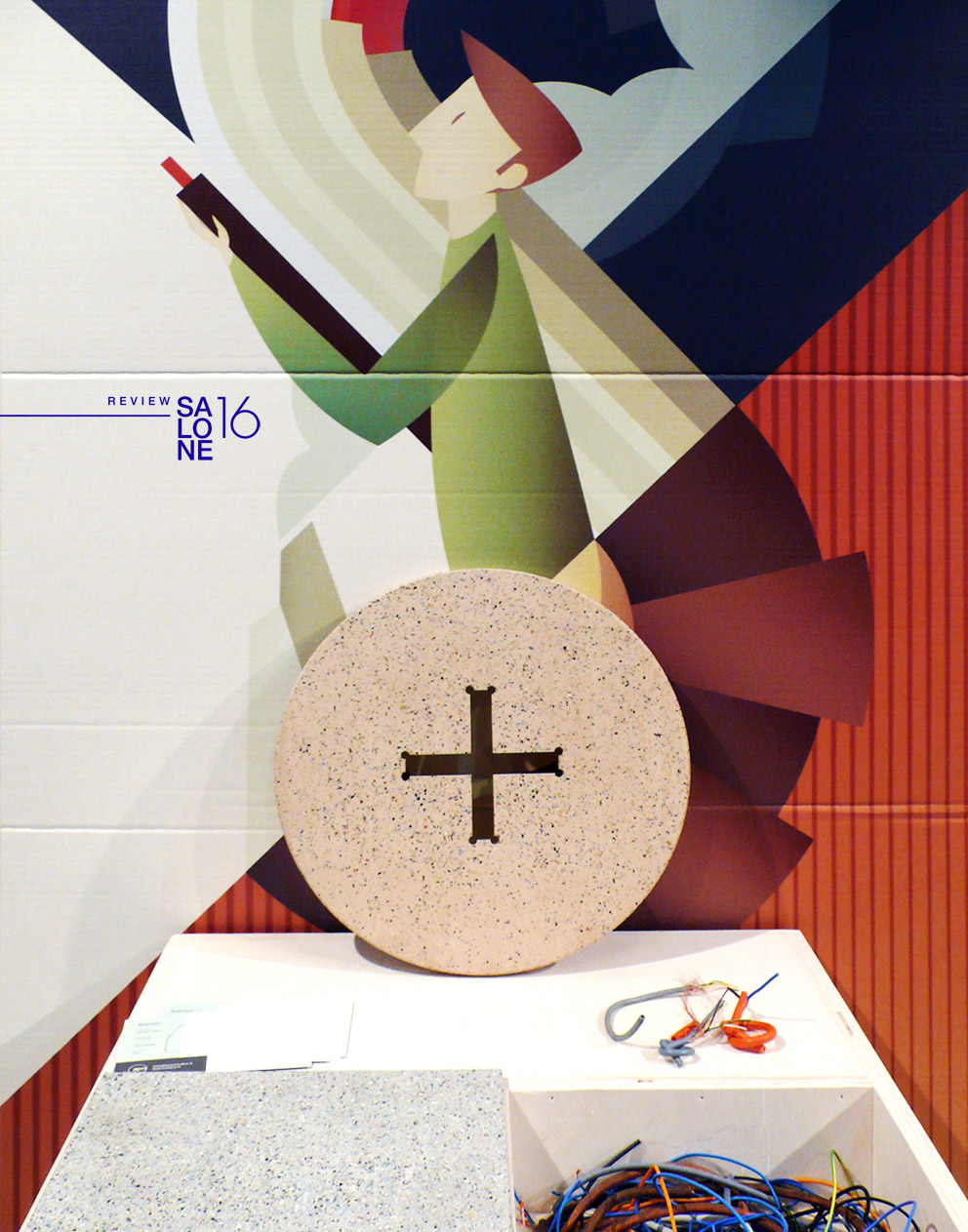 The most mobile luminaire

Lighting design is at present one of the most innovative fields of design. And this applies to the young designers, too. For example, German designer Antje Pesel presented her “Align” luminaire at the joint Halle/Berlin booth – the mounting system is separate from the power supply, and is, moreover, magnetic. “Align” can thus be positioned at any conceivable angle. Using a silicon ring, for example, it morphs into a tablelamp. And as if the aspiring young talents had all sat down and reached a consensus, wherever you looked at the Salone Satellite there were balancing, adjustable, sliding, transmutable luminaires. 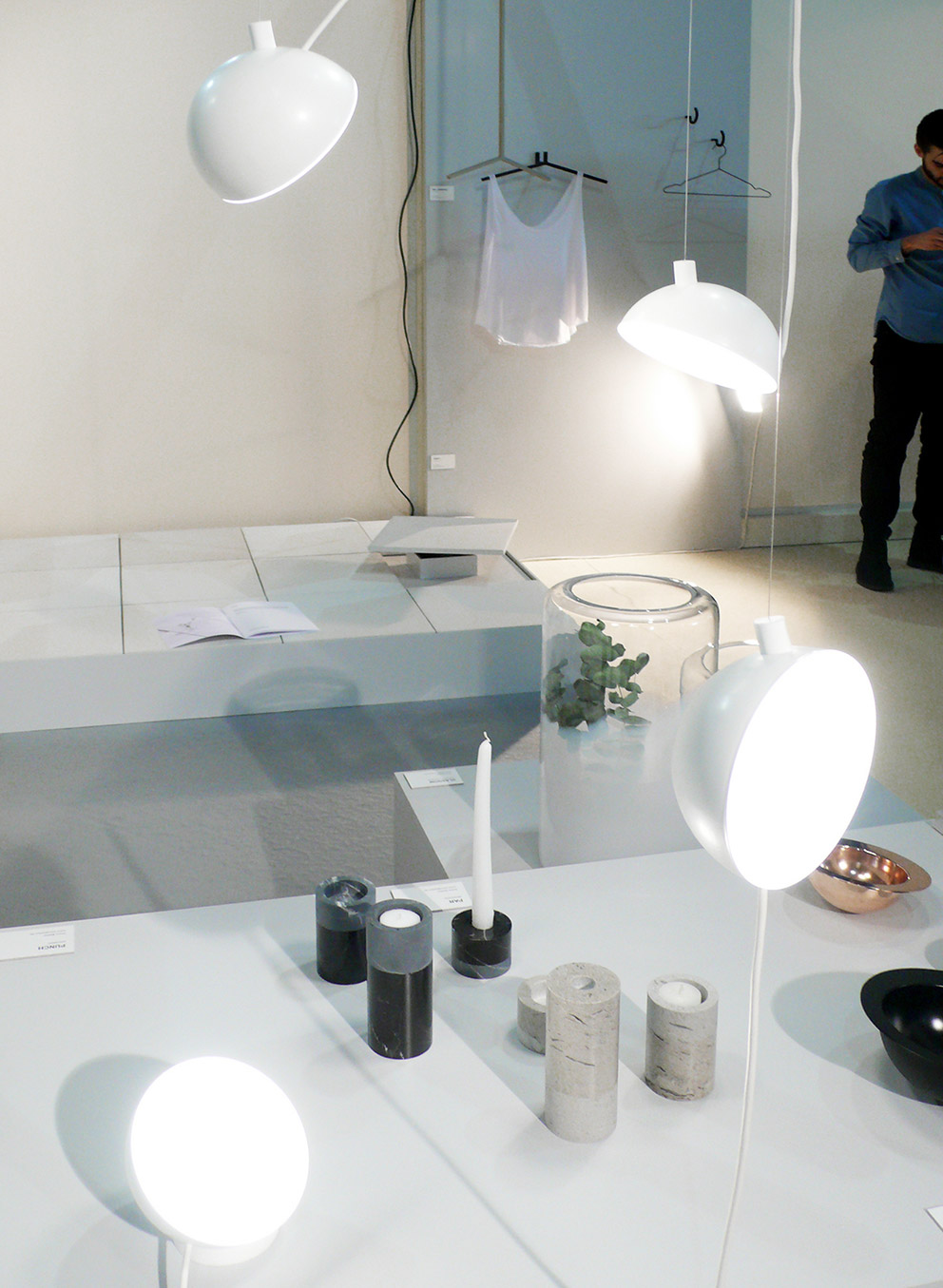 A minimalist design but highly versatile in use: The “Align” luminaire created by Antje Pesel. Photo © Jasmin Jouhar, Stylepark

The most contrasting collaboration

Last year they took the stage separately at the Salone Satellite, Swiss designer Daniel Wehrli and the likewise Swiss interior fabrics label Schönstaub. Skilful collaboration is not only the strategy of the day in the fashion industry, and a booth that is twice as large possibly grabs twice as much attention. Interestingly enough, other than their home country, at first sight little would seem to link these two partners, but it’s precisely the contrasts that makes things so lively: The wild patterns of the Schönstaub carpets are softly reflected in the metal bases of Wehrli’s audaciously constructed side tables. A win-win! 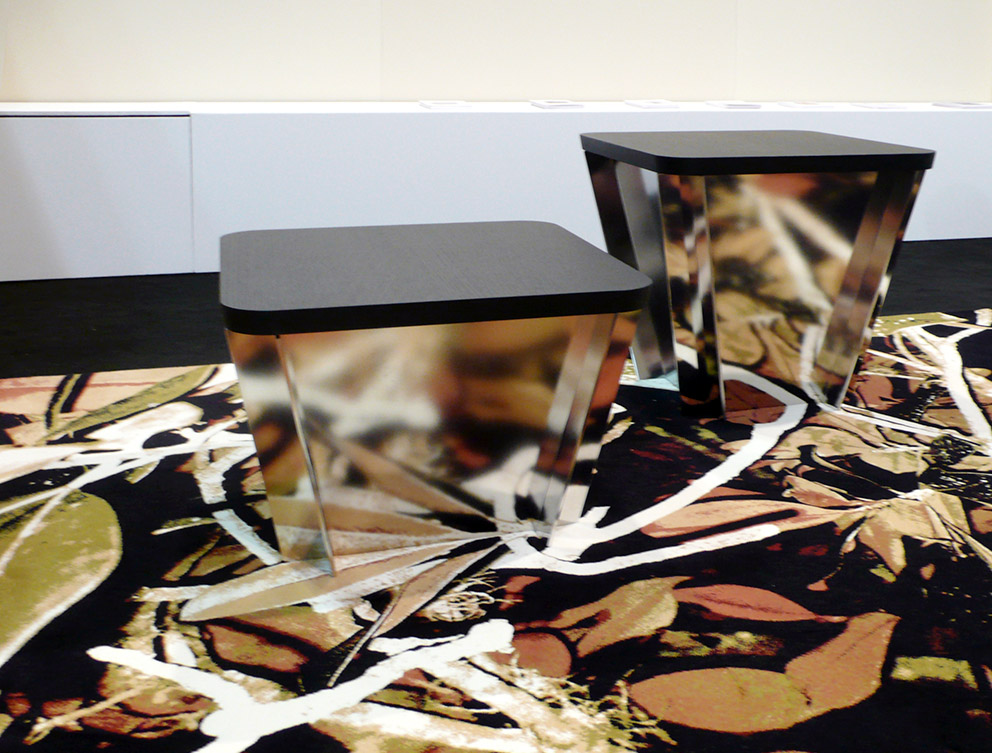 It was a real eye-catcher! This wooden stove by Arnheim graduate Klaas Kuiken stood in the Dutch communal niche. And why not, as precisely in holiday homes stoves are an indelible part of the interior. For his “eps” collection Kuiken experimented with a casting process used in the car industry. Molds made of polystyrene foam are buried in a sand-filled container. Liquid iron melts away the foam and adopts its shape, including the characteristic burled surface. 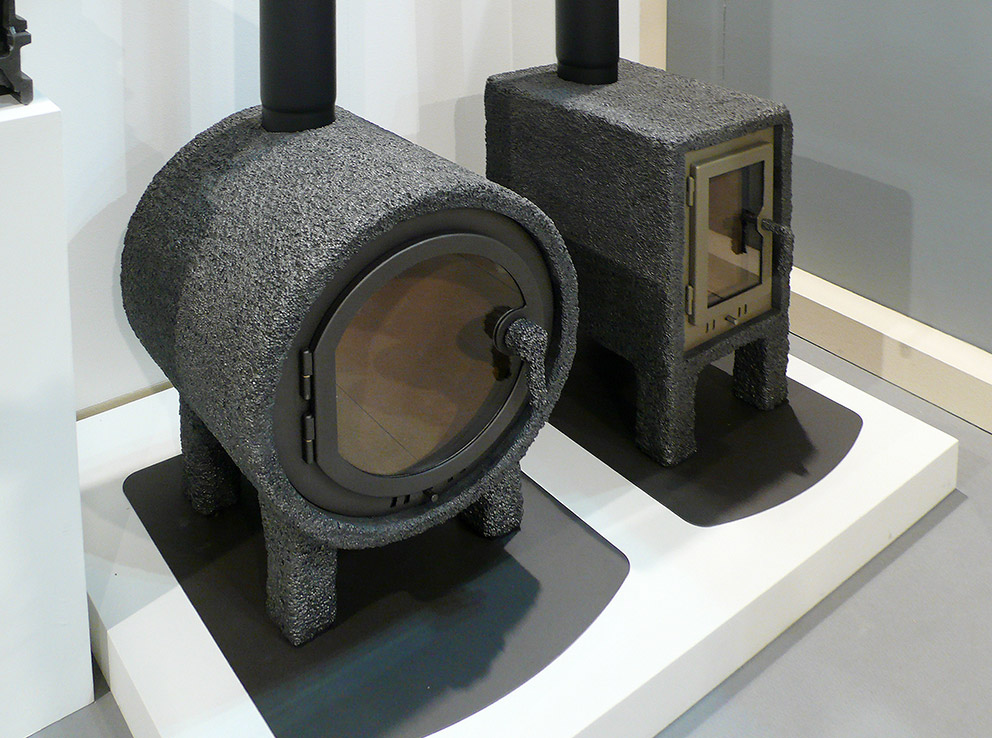 The most constructivist booth

Between all the wooden shelves, decorative lights and textiles this booth really stood out: Milan-based Gustavo Martini, a native of Brazil, opted for a conceptual presentation. The idea: A two-dimensional, black grid is transformed into a walk-in space and the black surfaces morph in the third dimension into the furniture. Such a coherent concept really made a splash among the otherwise colorful mix of exhibition niches. And this was underscored by the designer himself, who strictly wore black. It may not seem homely, but that’s what the young dudes are all about – it is they who experiment beyond the pale of market needs. 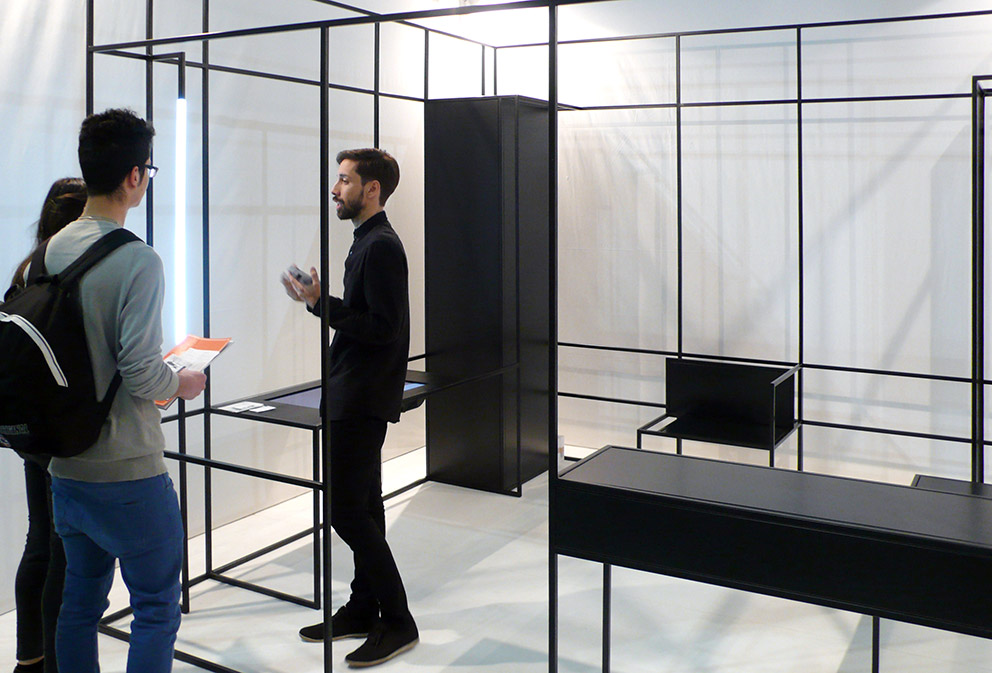 The most gleaming metal

One of the major interior trends of recent years? Non-ferrous metal, without a doubt. The key idea is to create surfaces that look as warm and soft as possible. And because oversaturation follows hot on the heels of every trend, metal may now be hard and cold again. Instead of oxidized copper and matt brass, we are now seeing chrome, stainless steel and aluminum, and polished to a high-shine finish at that. Thanks to the mutable(!) suspended luminaire “Topsy” by Rotterdam’s Earnest Studio, for instance, numerous stands were glistening and glittering. 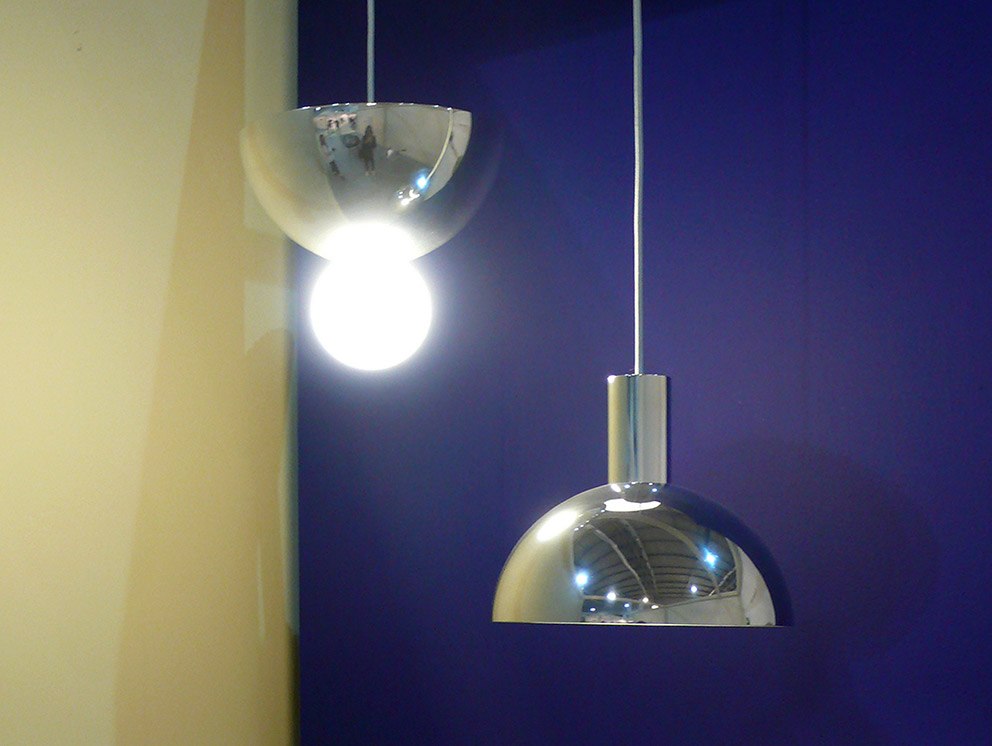 Spindly legs or thick pants? As a designer you have to decide whether you prefer the ethereal, floating variety or have your feet firmly on the ground. Frank Chou from the eponymous Chinese design studio left no room for doubt: He showed the furniture with the thickest cross sections of the entire Salone Satellite. Table legs the size of elephant feet, obese cushions and a floor lamp made of industrial tubing. Wow! 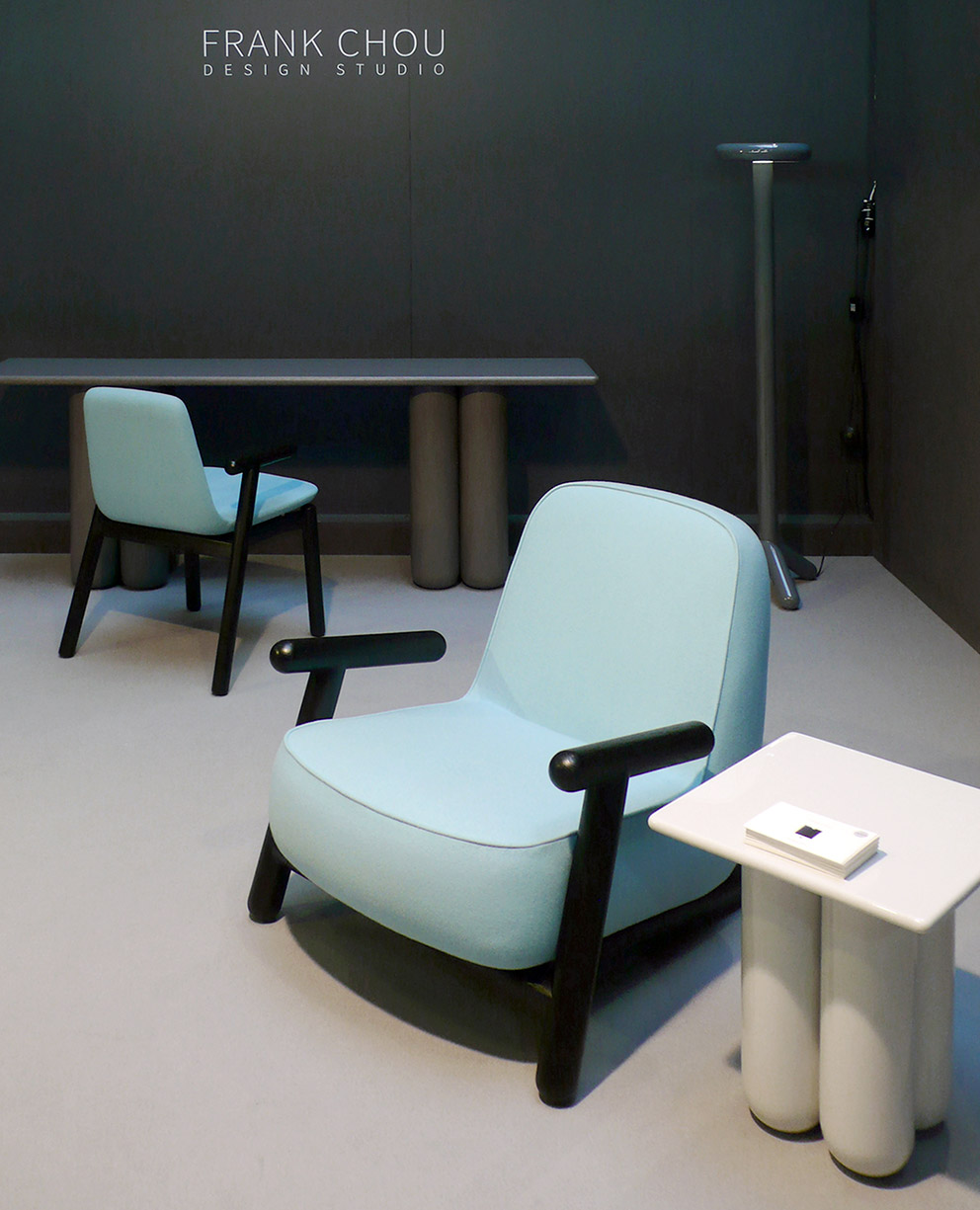 The most animal carpet

This attractive leopard gecko not only adds a special something to any corner of a room, but can also serve as an example of the interest many up-and-coming designers are showing in textiles. Its creator, Korean Jiwon Kim, had to do a great deal of research for her final project until she found artisans in India who were able to hand-tuft her animal carpets from wool in the desired quality. Other aspiring designers sought new applications for traditional Chinese weaving techniques (Yanding) or emblazoned Ghanaian patterns and symbols on wallpaper and curtain fabrics (AMWA). 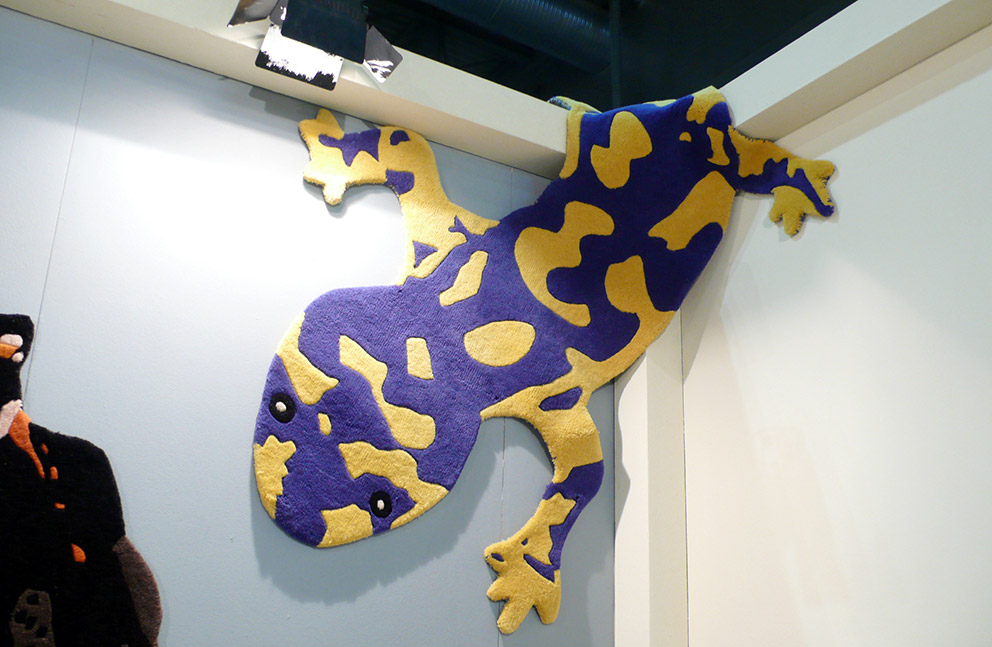 It is well known that the path to success is long and tiresome, including for young designers. It remains to be seen whether Austrian Clemens Auer will make it to the top quicker with this ladder. At least it should be more comfortable, for Auer has built the ladder in accordance with ergonomic criteria. As though climbing from branch to branch, both feet should be used equally in moving upwards – after all, normal ladders always leave one leg lagging behind. 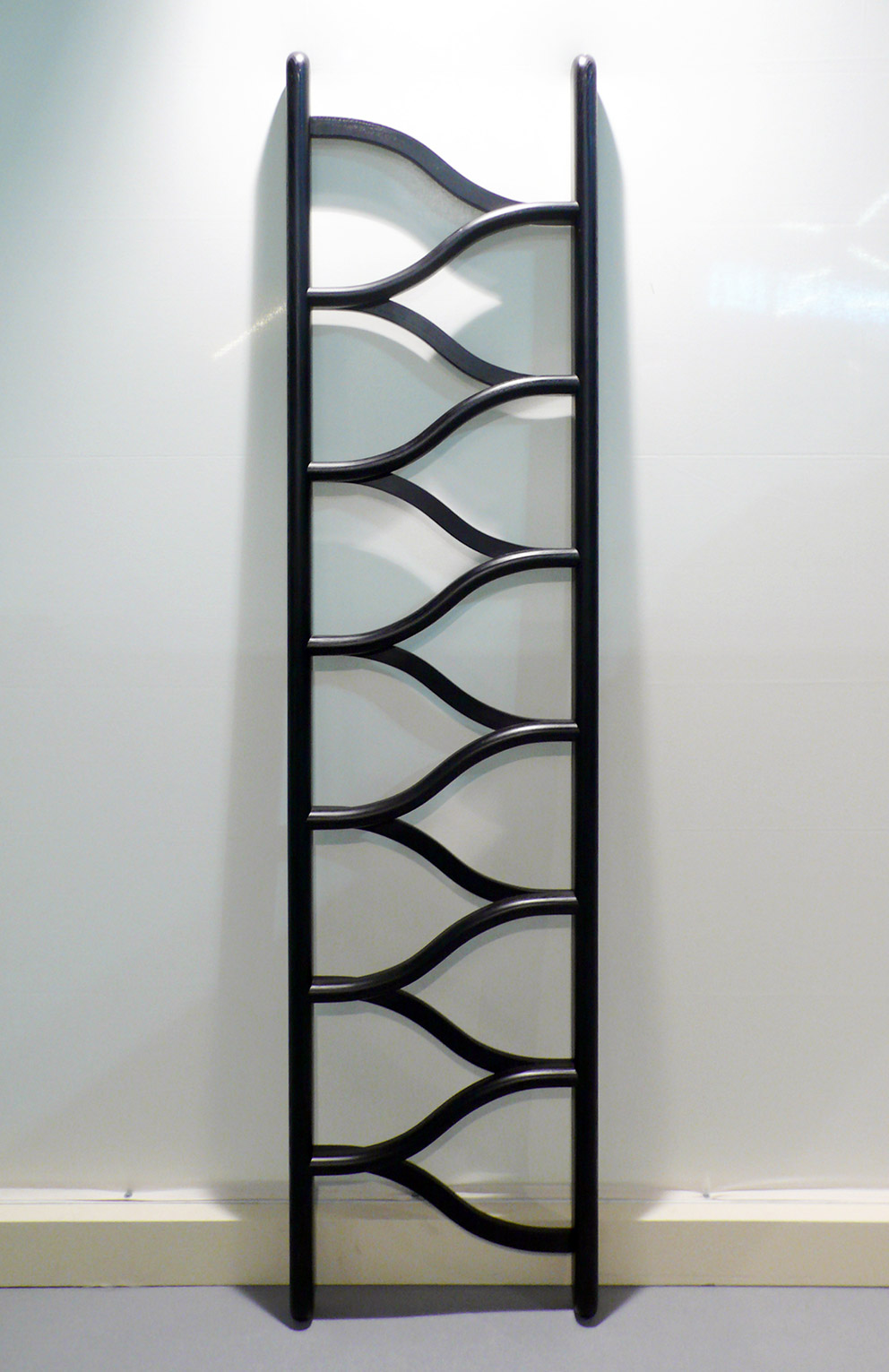 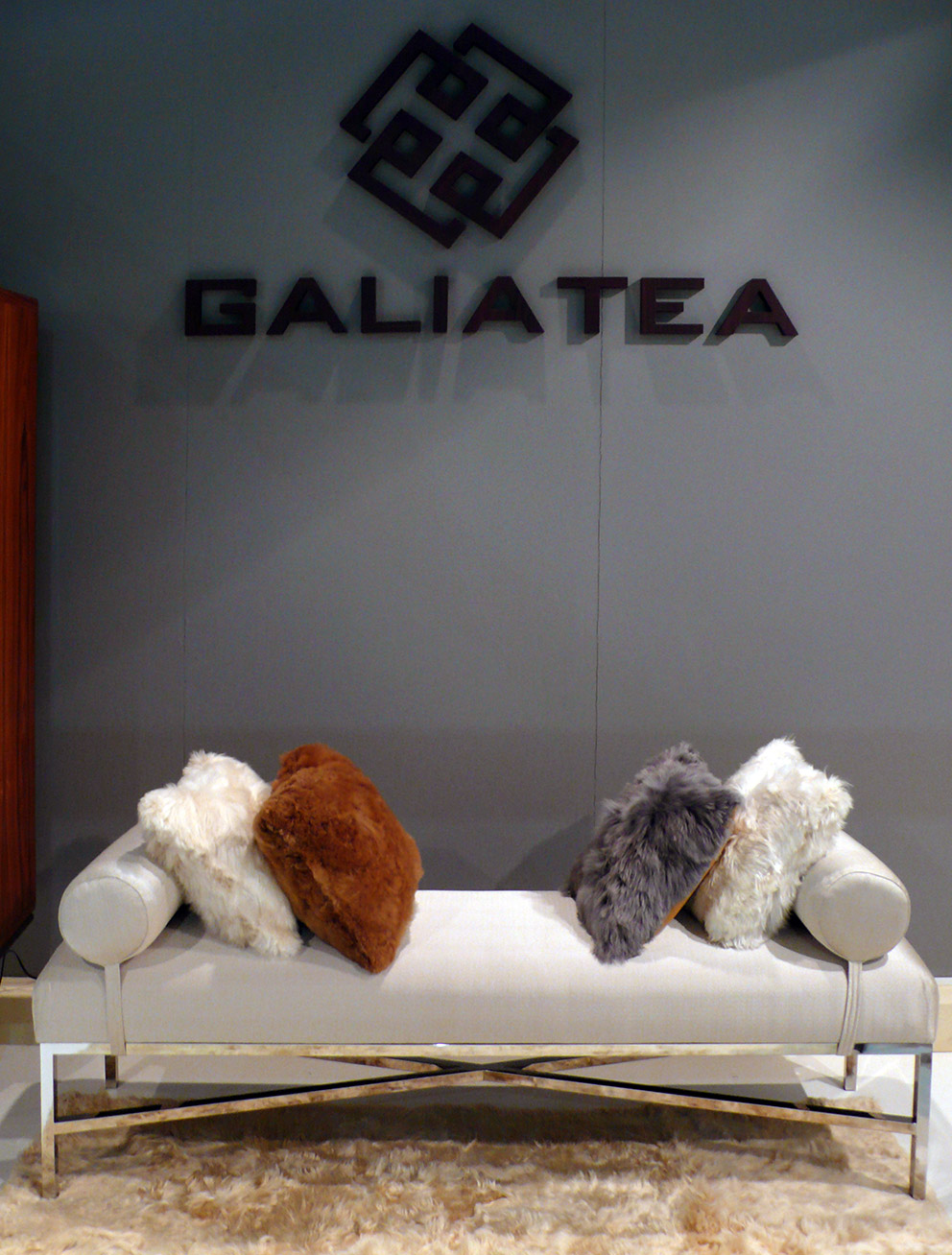