Greenland's first own prison is currently being built. Designed by Danish architecture studio Schmidt Hammer Lassen, it will afford up to 400 inmates an unimpeded view of a fjord, where they can watch the seasons, ice floes and occasionally, with a bit of luck, a whale passing by.
by Florian Heilmeyer | 2/12/2017

Everything’s relative. For example, it is not particularly cold in Nuuk – by Greenland standards. After all, the capital lies in the far south, some 250 kilometers from the Arctic Circle, with almost all the other settlements in Greenland lying north of it. Compared with the rest of the country the climate here is mild and temperate, the Nuuk Fjord never actually freezes, and in the dark winter months temperatures do not drop below -10° centigrade. Laughable compared with the settlements in north Greenland, where there is a permanent covering of ice that merges seamlessly with the ice sheet of the Arctic Ocean.

And the 17,000 inhabitants have problems other than cold and snow. Most manage to eke out an existence mainly through fishing and tourism. But despite the beauty of its landscape, Nuuk is not exactly an idyll and alcoholism, unemployment and a lack of prospects are by no means seldom. So at this moment Greenland’s government is building the country’s first prison built. Given that until now offenders have been sent to Danish prisons, the new prison is also considered a further step towards national independence.

As such, it is hardly surprising that this is an ambitious prestige project. The “Nuuk Correctional Facility,” as it will be officially called, is to be a modern, friendly prison. In 2013 Copenhagen-based architects Schmidt Hammer Lassen won a competition to design the facility, which is to accommodate up to 400 inmates on an area measuring some 8,000 m². According to the architects, the design seeks to find an appropriate balance between the concepts of open and closed. So it is once again a question of relativity, after all, compared to other prisons the new facility will offer relatively generous views of this incredibly beautiful, raw landscape. The complex is being built northeast of the capital, behind the airport and below the picturesque peak known as “Little Malene” (in Danish: “Lille Malene,” or originally “Quassussuaq”).

Now and again, with a bit of luck, a whale

The new correctional facility lies directly on the northern slope of the mountain, which descends directly into the water. The architects have developed different buildings for different activities, with living and sleeping quarters in a different section from the areas used for work or leisure. After all, the inmates are to have a daily routine, either going to school or work, so that their later reintegration into society should be easier. The architects have arranged all the individual parts of the building so that different views of the landscape are visible. “Closeness to nature is essential for all of Greenland’s inhabitants” says project manager Jette Birkeskov Mogensen in describing this approach. “By exploiting the sloping site all living quarters in this prison lie at an elevated level, making it possible to look over the perimeter wall. All the cells have large windows without bars, affording views of the fjord and the mountains beyond. From here it’s possible to watch the seasons, passing boats, or now and again, with a bit of luck, a whale.”

Asked to what extent this facility differs from other prisons, Mogensen replies: “In many ways it is no different from prisons in Denmark. However, we did have to pay even more attention than usual to finding good, simple design solutions using local materials that are easy to maintain and can withstand the extreme climate. If you use other materials it can take up to four months to get them produced and shipped. This way you can achieve an honest, robust design that ages in harmony with time and nature. And then of course there are special things to consider, for example, not allowing too much snow to collect in the corners close to the buildings or on the perimeter wall.” Not to prevent a snowball fight, but to minimize the possibility of inmates escaping. Because, no matter how attractive the view might be from the prison, Greenland is still more appealing when experienced in liberty. 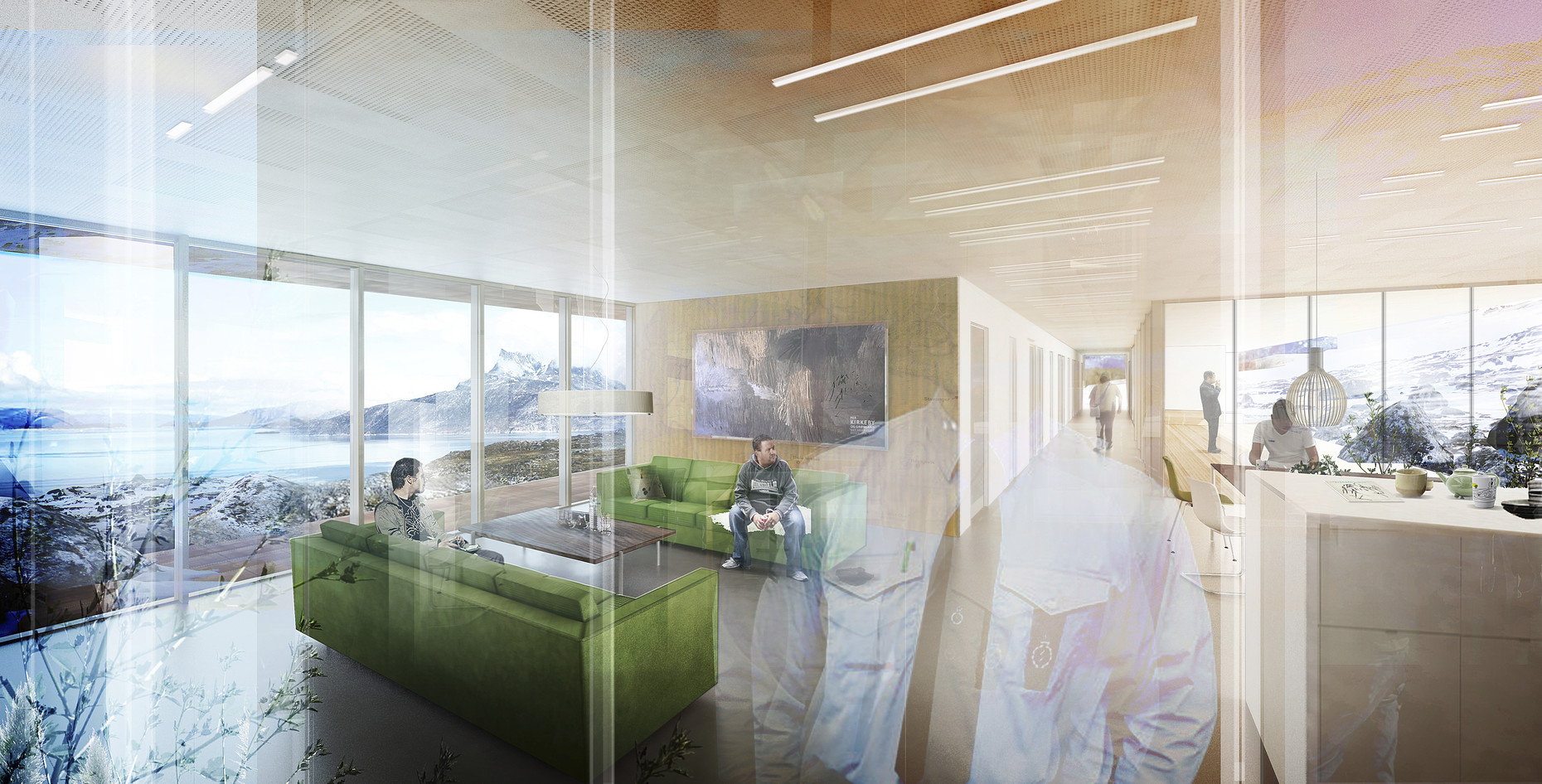 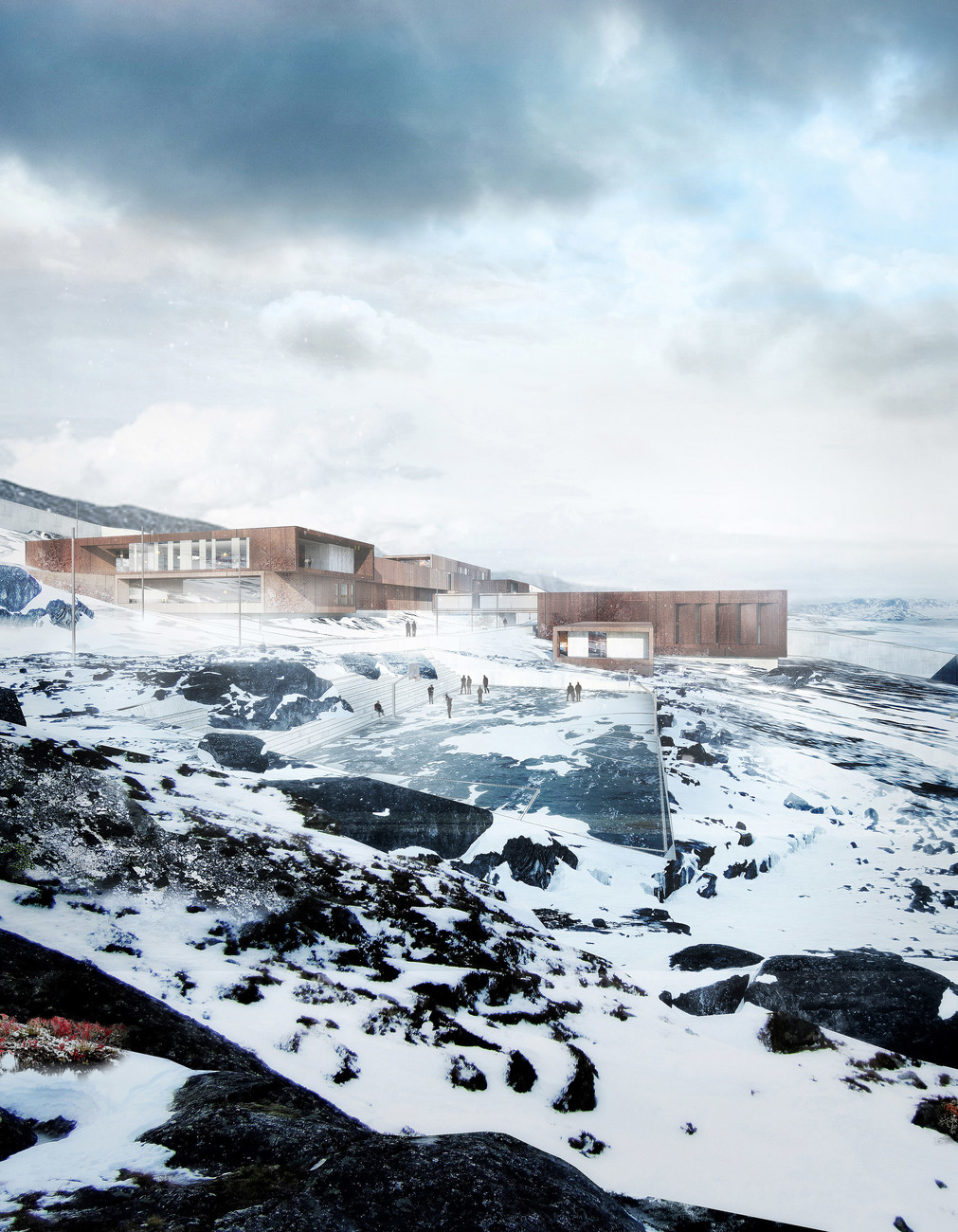 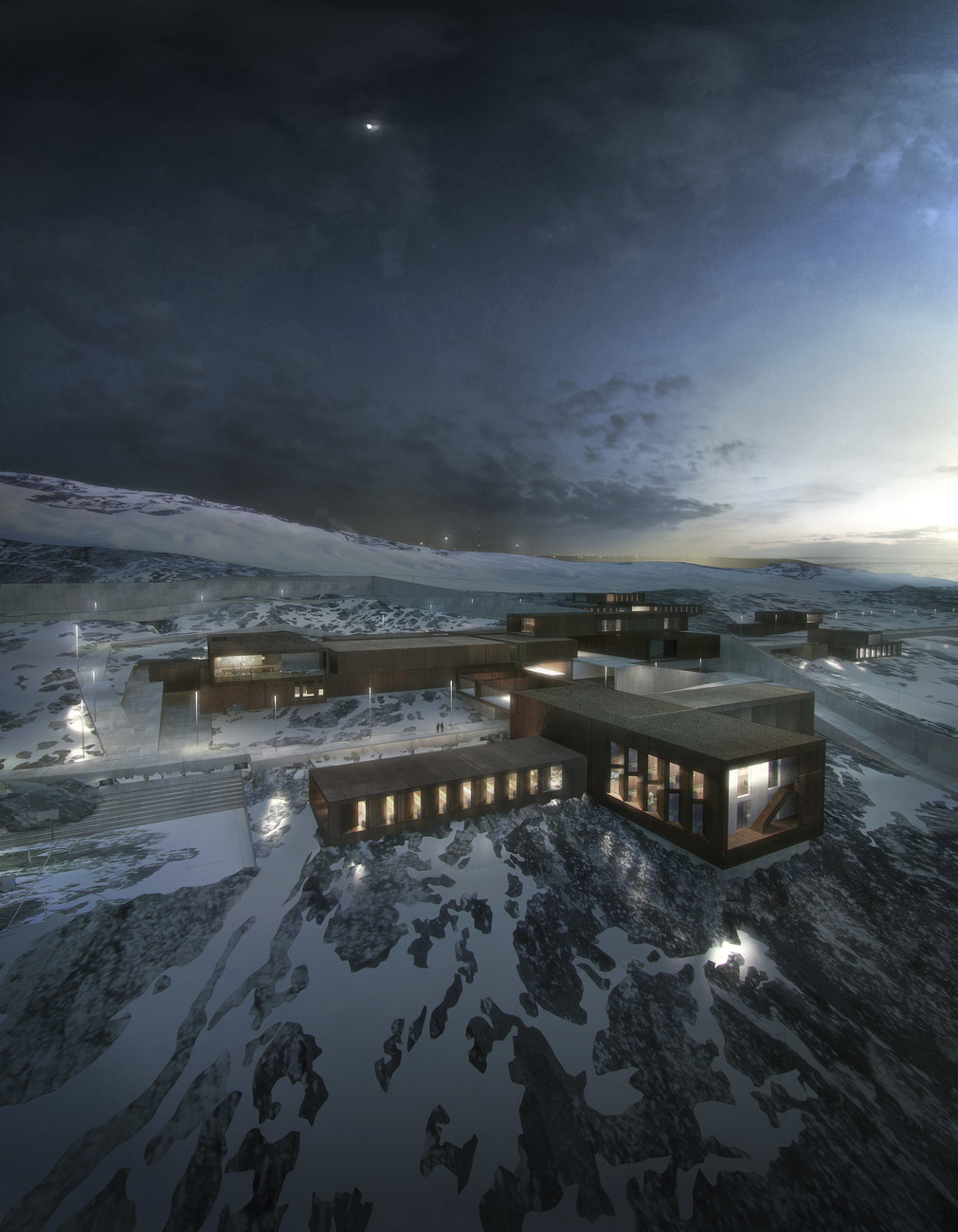 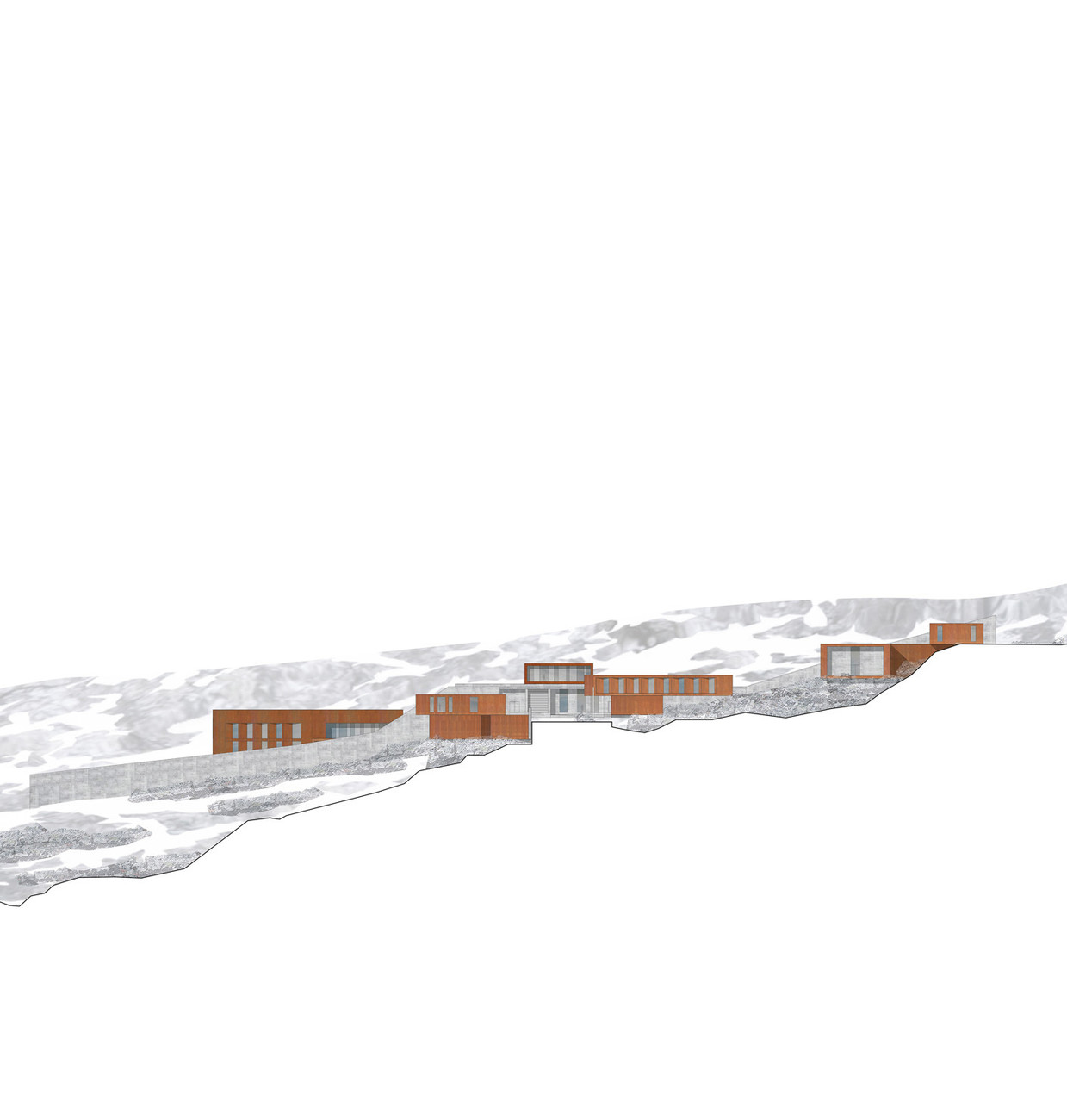 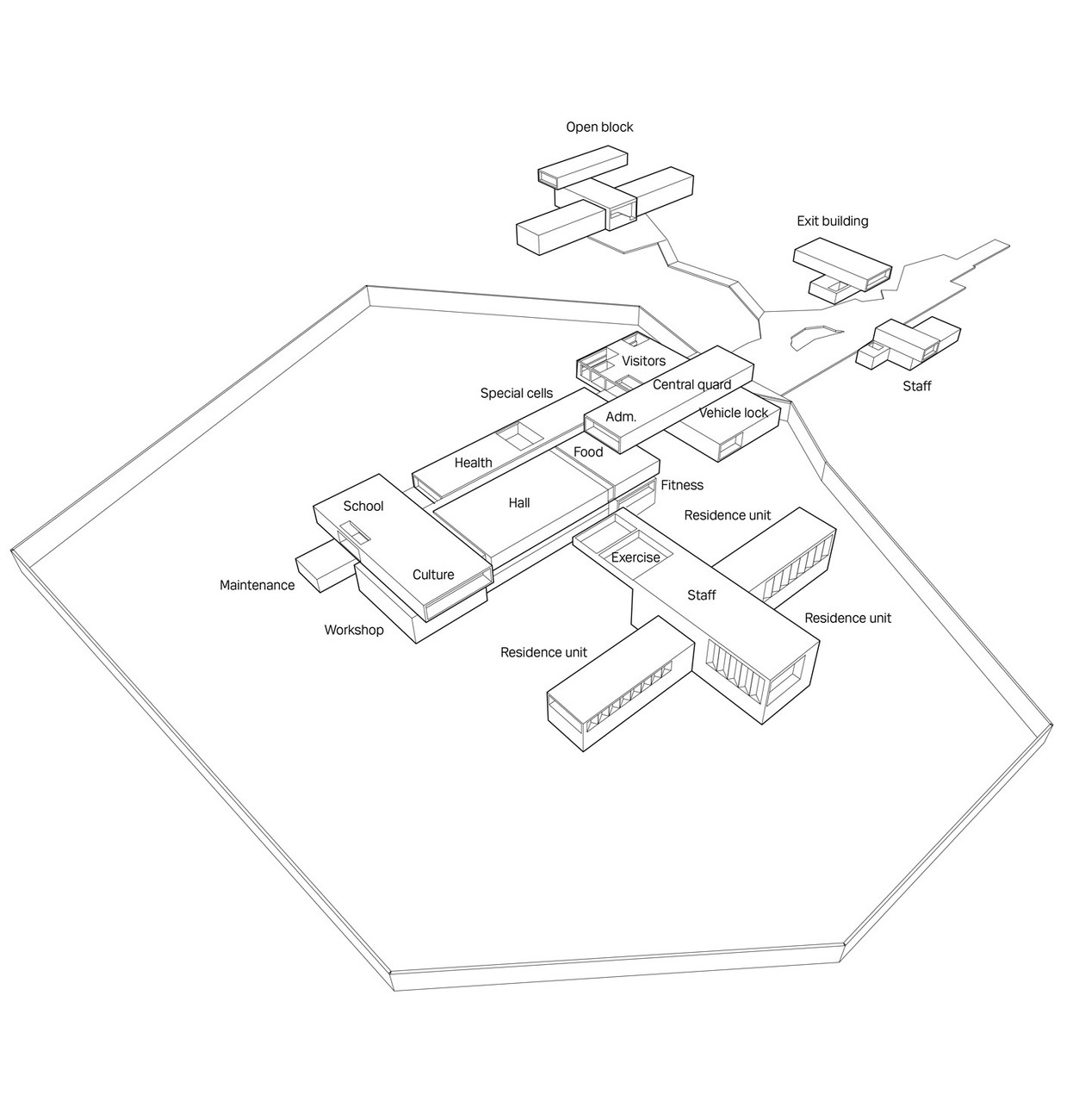