top
Snapshot – Shooting back on the Festspielhügel 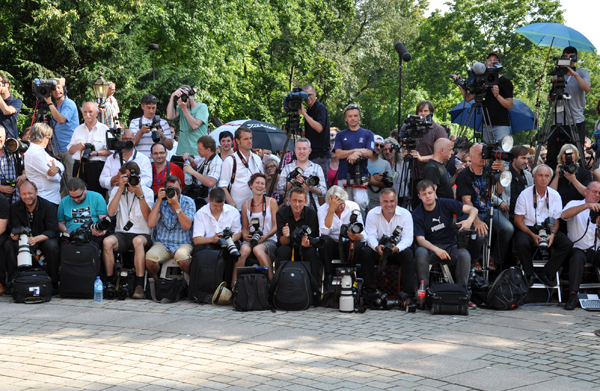 The same each year: grand opera at the Bayreuth Festival Hall. On the opening evening of the Richard Wagner Festival the tension mounts as everyone awaits the appearance of the more or less photogenic celebs. In fact almost all the members of the German cabinet are at hand. Are they just here for the music? Or is the red carpet the magnet that attracts them?

The Audi A8 in which the author has gratefully been able to hitch a ride, is moving gradually in a long queue of limousines up the hill to the festival hall. Until the chauffeur brings it to a stop exactly in position for me to step out onto the celebrity catwalk. The hordes of photographs get themselves ready for their next shot. Cameras are raised to eyes, focuses set. But, no, it is not the minister of economics who alights, complete with tuxedo and polished shoes. Nor is the person a candidate for a political post potentially up for grabs after the next general election. The tension dissolves. Perplexed, my colleagues from the media stare at me, the unknown visitor, who at least manages to bring a smile to some of their faces by swapping roles – and photographing the photographers.

Unlike Captain Fokke in the myth of the “Flying Dutchman”, I mastered the managed to round the Cape of Good Hope. Thanks to Audi and to the dear colleagues who provided the smiles so freed from the burden of facing celebrities.

The trip to the Bayreuth Festival was kindly supported by AUDI AG.
Photo © Robert Volhard, Stylepark