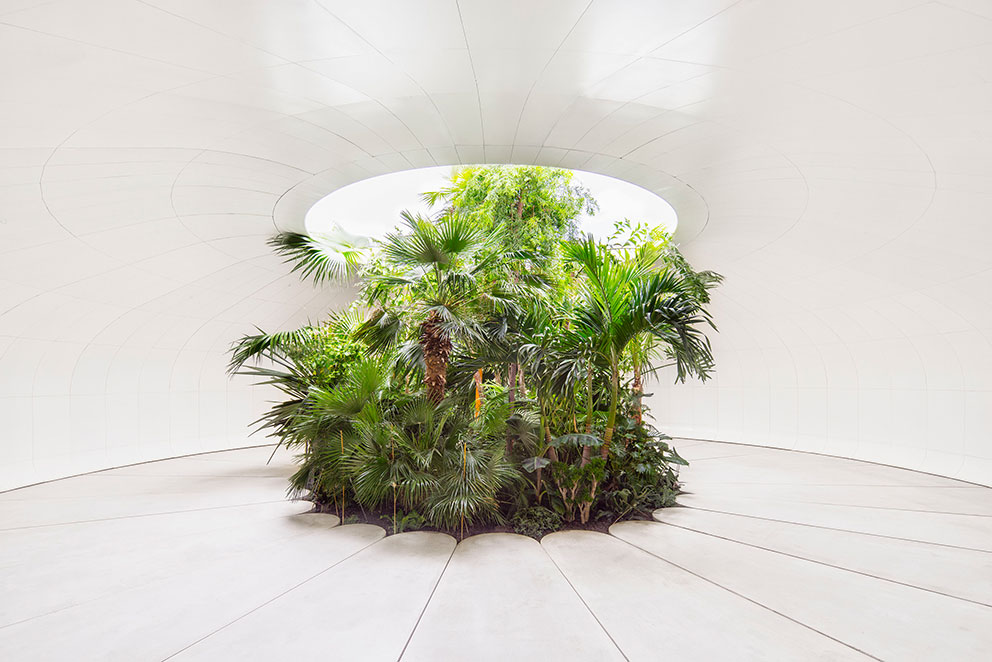 What is the minimum needed to achieve a maximum quality of life? That’s the question explored by Dutch architects SeARCH in and with their pavilion for “Het Nieuwe Instituut” in Rotterdam. “Architecture is increasingly connected less with people and more with luxury,” suggests Bjarne Mastenbroek, founder of the company during our tour of the pavilion. “Yourtopia” is what the architects have quite immodestly called the building, not a “non-space” but one placed directly next to “Het Nieuwe Instituut”. Opposite stand the Dutch Modernist notions of residential life in the guise of radiant white, functional exemplars of “Nieuwe Bouwen” masterminded by Brinkman and Van der Vlugt. The pavilion does not catch the eye from afar, as it resembles a grass-covered hillock shaped a bit like an igloo or a yurt. Is maximum quality of life to be found underground?

All manner of words have been lasered out of the steel entrance door: “War – Animal”, “Freedom – Money”, “Earth – Paradise”, “City – Jungle”. The over-obvious ambivalence of the juxtaposed words, the black steel of the entranceway – it all serves to reinforce the impression that we stand more before a religious place than an architectural experiment. Stepping into the pavilion through the somber entrance, you find a bright, white, round room in the middle of which a kind of jungle sprouts up. No window interrupts the smooth wall, and light only enters the room from above. You start to randomly associate: “Yourtopia”, the purported minimum, proves to be a steel Pantheon, a firmly pitched yurt or a smoothed igloo. Are we in a clearly delimited paradise beneath the grass with a view of the heavens? The hammocks and the dense jungle (incidentally, it later turned out to be the toilet) seem to confirm that residential comfort here is at the lower end of the “comfy scale”. The acoustics are amazing, incidentally. Irrespective of where you stand in the place you always feel that even the smallest noise was actually caused right next to you. So this is what the architectural minimum for maximum quality of life is supposed to be like? And what about the view of the city? The bed, the wardrobe, the kitchen, the table? Most tents seem a lot more comfy. 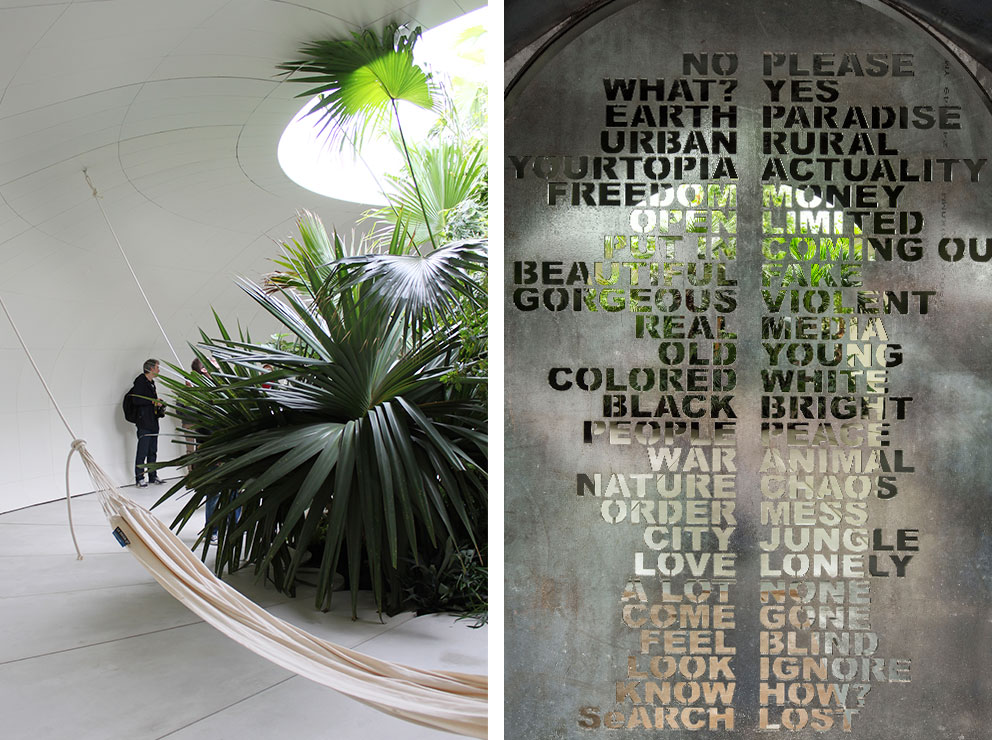 The over-obvious ambivalence of the juxtaposed words, the black steel of the entranceway – it all serves to reinforce the impression that we stand more before a religious place than an architectural experiment. Photos © Ronald Tilleman

People often accuse architects of fetishizing the ascetic, the pure space, which ideally is then not sullied by people and the articles they use. And you might be inclined to tell them they had designed a building while ignoring the possible users and human needs. But that would not do justice to Bjarne Mastenbroek and his team. Because it’s your own subjectivity that prompts such hasty pronouncements, as you simply base the notion of a home on your own personal preferences and everyday habits. Everyone always thinks they have too little space at home, believe you need a view out and all sorts of furniture. Seen from inside your own comfort zone, you think you know all too well what the minimum benchmark has to be. Are 45 square meters of living space, which is what the average person lays claim to today, justifiable in terms of the debate on sparing resources and sustainability – when you morally condemn every SUV driver? By comparison, only 40 years ago the average was only 29 square meters per person.

Henry David Thoreau for one would question the standards we have as regards our homes. The author of “Walden; or, Life in the Woods” rejected urban life back in the 1850s. And he was not driven by some naïve wish to escape the world, but by the desire to live an alternative and balanced lifestyle. It’s a wish you hear often today, but one usually only expressed in shopping at organic supermarkets. In the first chapter of “Walden”, which Thoreau dedicates to “Economy”, he asks whether one should really want to own a house if, as is his opinion, it just entails additional compulsions: “Most men appear never to have considered what a house is, and are actually though needlessly poor all their lives because they think that they must have such a one as their neighbors have.” It’s a dilemma that was all too clearly outlined by the last financial crisis. Yet we have learned nothing. We still build our penthouses, downtown palaces and all those other residential dreams that hardly anyone can afford and which squeeze us out of the very cities to which we just sought to return. 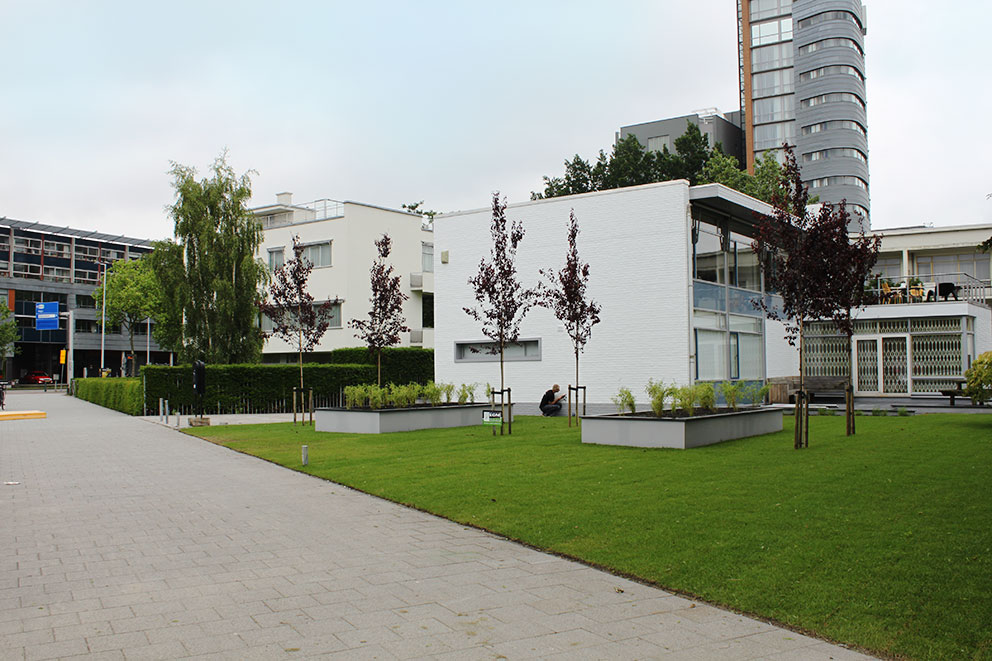 Opposite of "Yourtopia" are the ideas of residential living of the Dutch modernity "Nieuwe Bouwen" in the form of white, factual buildings. Photo © Adeline Seidel, Stylepark

Thoreau himself drew conclusions from this and simply banged together a wooden cabin. A room with a window, a few bits of self-made furniture, and a few other items. What you need to survive, not more, not less, and observed with great acumen: “Most of the luxuries, and many of the so-called comforts of life, are not only not indispensable, but positive hindrances to the elevation of mankind. With respect to luxuries and comforts, the wisest have ever lived a more simple and meagre life than the poor. (...) None can be an impartial or wise observer of human life but from the vantage ground of what we should call voluntary poverty.”

If one considers the SeARCH pavilion in this light, then it’s a courageous experiment. Not a cabin in the woods, but also not luxurious, accommodating or comfortable. It is simply not all those things we like to have in order to recover from our purportedly stress-riddled everyday lives in an ever more structured industrialized world, rewarding ourselves with comfort. “Yourtopia” is a call for us to wake up, exit our comfort zones and flee the city and its luxuries by means of a building made of steel and jungle, with a grass lid into the bargain. 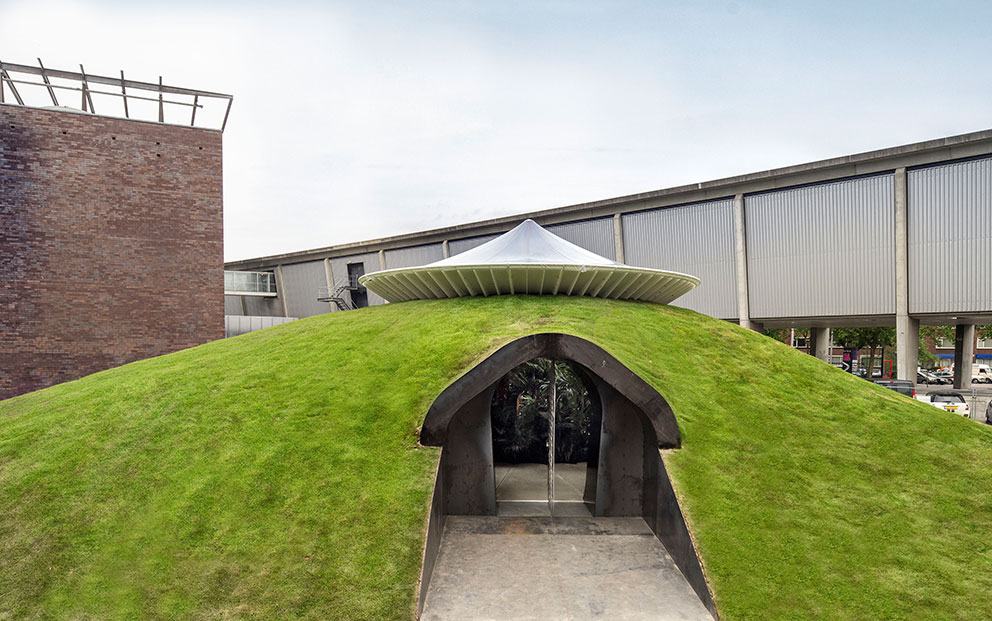