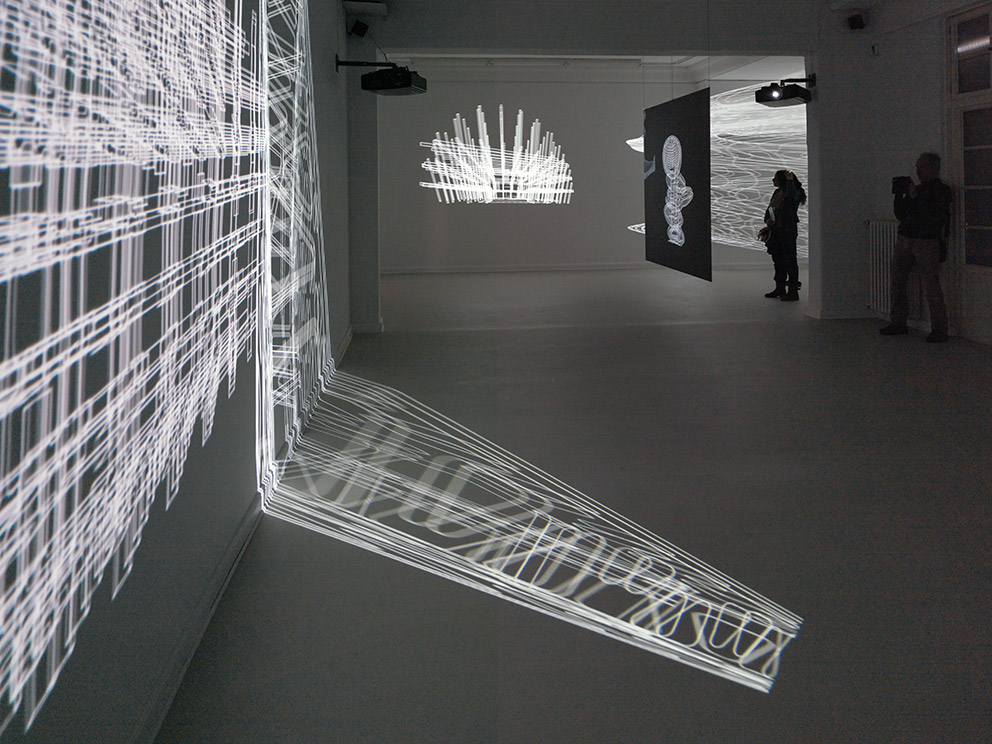 Models made of light and spherical bodies: grid structures of realized and unrealized projects are transformed into projections of animated lines.
Photo © Roman März, Haus am Waldsee

Architecture floats in Zehlendorf. Freed from gravity’s pull, a pavilion, a high-rise, sunshade roofs and a cafeteria float through the Garden Hall of Haus am Waldsee like satellites through the infinite expanses of space. Bright grid structures rotate on their own axes in the darkness, overlap and in the process fill the entire hall. All of it just projections, and yet the audio/visual installation forms a pivotal point of the exhibition “Strukturalien. Architecture as urban sculpture”. The show not only presents works by Jürgen Mayer H. but also explains what holds the very heart of this Berlin architect’s world together.

Another key element is to be found on the upper storey of the exhibition building at the end of a small enfilade. There, curator Ludwig Engel has spread out the study entitled “Arche Noah” which Jürgen Mayer H. created in 1990 at New York’s Cooper Union. Back then, he explored in drawings as well as wire models and volumetric models how new, irregular shapes could be generated from a grid based on the proportions given in the Bible for Noah’s Ark (30:3:5). Thus, Jürgen Mayer H. developed strategic processes based on the principles of 12-tone music and aleatory systems, prompting his teacher John Hejduk to tell him to take the concept and team up with some mathematics students. The latter then wrote scripts for the design process, enabling them to press a computer button and play through on-screen what Jürgen Mayer H. had spent weeks calculating, drawing and building.

The main theme of the exhibition unfolds between these two rooms, namely the one with the projection purpose-developed for the exhibition, and the other with the semester project and its transition from analog to digital architecture: the meaning of structural properties for Jürgen Mayer H. On display across the two floors are structural models, pencil sketches, films and photographs of realized projects. 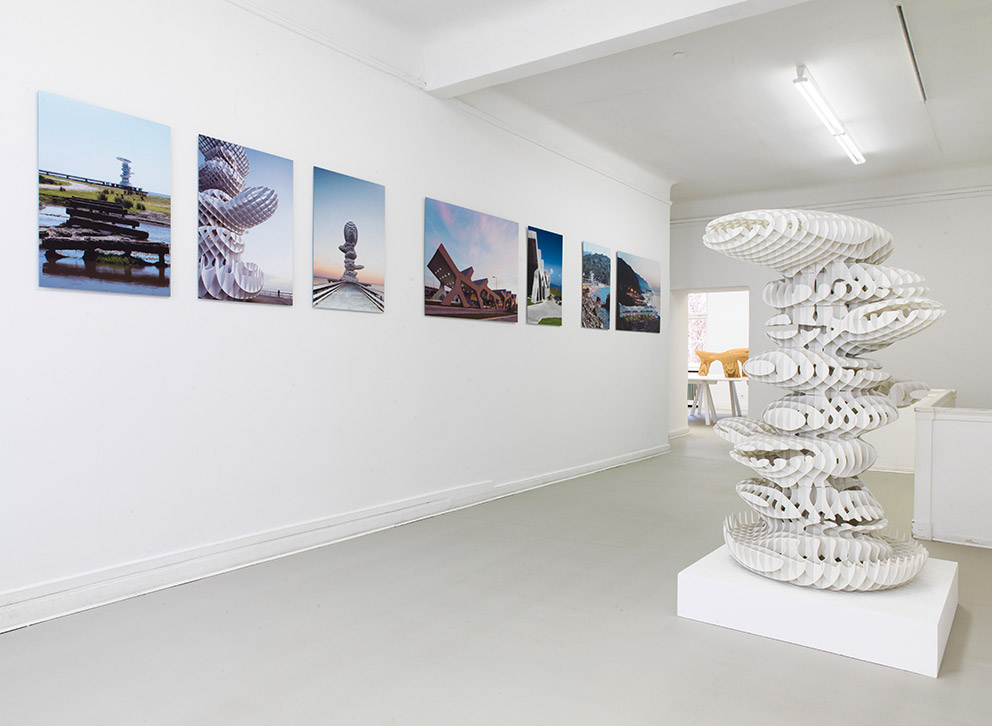 “We didn’t want to simply present works, the swagger of a commercial company,” recounts curator Ludwig Engel, who two years ago was in charge of the Haus-Rucker exhibition here at Haus am Waldsee. While touring the new show he comments that “we asked ourselves how to exhibit something that is really defining over and above all questions of aesthetic taste.” A show that consistently evolves around a theme – this is also a premiere for Jürgen Mayer H., who goes on the record as saying “the curators offer a marvelous, clear view of a special partial aspect of our work.”

This focus on the skeleton underlying architecture is both a meaningful way of better understanding Mayer H.’s work and also a curatorial artifice to sidestep a difficult issue: Because Jürgen Mayer H. is not only the architect of remarkable structural designs, such as the sunshade world of “Metropol Parasol” in Seville or the Moltke cafeteria in Karlsruhe. The J. Mayer H. brand also includes a kind of full-throttle formal idiom with which in the better projects he truly seems to have kneaded the building material. In the more conventional ones, the facades made up of dents, bands or squiggles simply lie like a strident second skin over the building. Which is why JMH is a controversial figure in the in-crowd. In the “Strukturalien” show it is more the company’s “chamber music”, as he himself calls it, in the foreground. One could say the softer, more serious tones beyond all zeitgeisty booms. 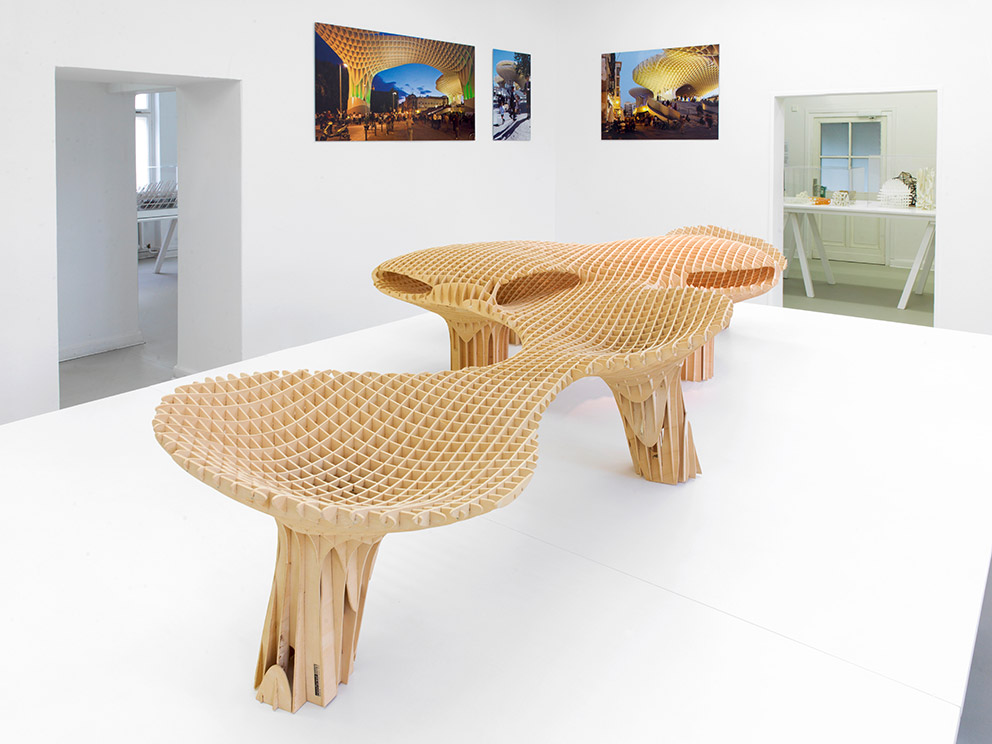 Load-bearing structures can truly be an awfully dry topic. Things can easily verge on being reduced to engineering-speak, buildings reduced to what holds them up, intricate plans rolled out that baffle most. Nothing of the kind is the case at Haus am Waldsee. One strength of this show is the atmospheric presentation. The curators have fostered two opposing moods. The entire ground floor of the former upper-class villa is shrouded in darkness. In the Garden Hall, the grids of light drift through the night in solitude, in the room in front of them the outline of the Ostfildern Town Hall glow like an epiphany. Jürgen Mayer H.’s early stroke of genius has been engraved by laser onto a small glass cube similar to many a souvenir: Architecture as disembodied art, as if there were not loads to be borne, no foundations, no roof.

Walking up to the storey above is like emerging from the darkness into the light: The exhibition spaces are radiant in a cold white gleam that ensure each detail is acutely emphasized. Below the intention is emotional immersion to give way up here to exact inspection. With the signature building “Metropol Parasol”, the cafeteria and the pavilion in Karlsruhe and the sculptural pier in Lazika, Georgia, four standalones that have been realized are on show – each celebrating the experimental beyond the pale of mainstream commercial work. Ludwig Engel declares that “the company’s great achievement is to have realized such designs. I discern a strong reference to the 1070s. Although not in formal terms, but as regards the spirit, which enjoys a Renaissance here thanks to the digital feasibility of many visions of the future that back then had to remain speculative.” The very first exhibit in the foyer shows just what is feasible today: a convoluted object generated from Jürgen Mayer H.’s collected data backup patterns and the product of a 3D-printer. 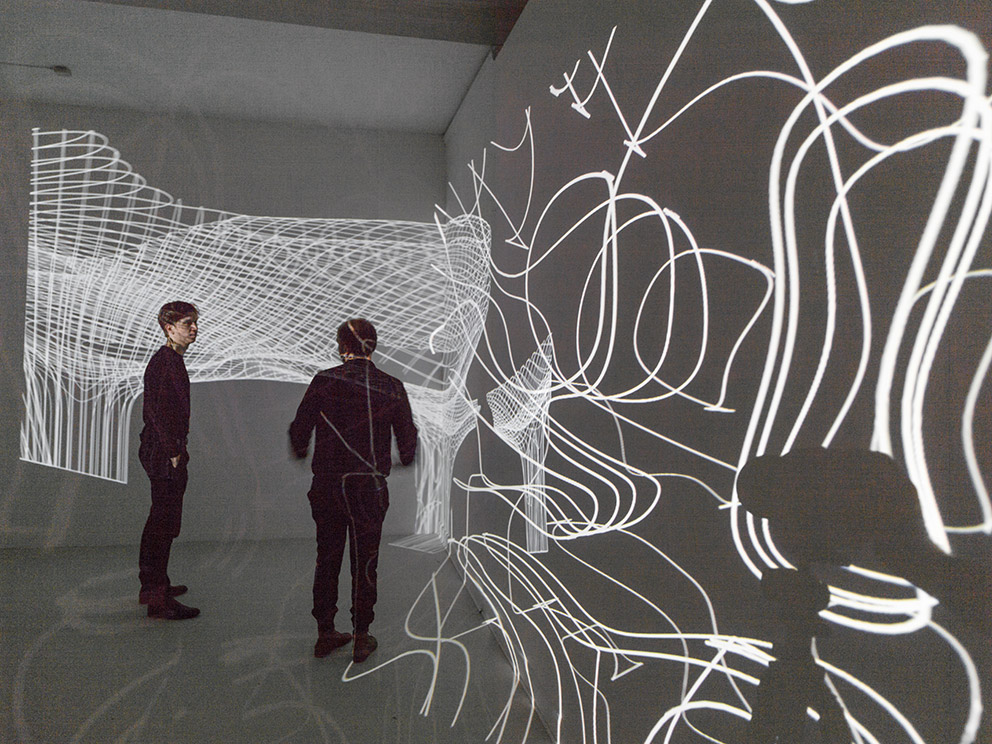 Flying roofs and rotating high-rises: In the exhibition at Haus am Waldsee buildings by Jürgen Mayer H. are staged by means of light projections. Photo © Roman März, Haus am Waldsee

Tussling with the shape

While structures form the manifest topic of the exhibition, the tussle to find the right shape forms the undertone. Here, the Noah’s Ark project again blazed the trail: “For me, this way of doing architecture was a real eye-opener,” the architect recollects. “As a student back then I was at the point where I was asking how to take design decisions, how to arrive at the shape, how shape can involve conformity, conventionality, social formality; how to argue the shape, what is actually an aesthetic statement?” Back then Jürgen Mayer H. devised approaches and design strategies that he has, so he says, since internalized. “That’s the background that enables me to take a decision, a basic framework that makes available within a specific approach a large spectrum of expressive possibilities that interact and do not function as opposites.”

So what holds Jürgen Mayer H.’s world together on the very inside? Is it the structures, as the exhibition suggests? The bones, freed of flesh and skin, that the show presents as the “Strukturalien” along with their very own aesthetic? Or is it at the end of the day more the unconditional wish to find an expression, to construe standalones such as the sunshade roof in Seville’s old town as outsized sculptures and raise them to the status of monuments to architectural feasibility?
The structures bear the load of the shape, tweaking them a welcome playing field for a “nerd” such as Jürgen Mayer H. also is – take, for example, the data backup patterns. But they are not the main thing. The show also reveals that this approach to architecture can also spawn marvelous buildings. That Mayer H. can just as marvelously fail is shown by a trip back to Berlin’s Mitte district, to his apartment building on Johannisstrasse. There, the concept does not hhinge on a strong structure, the expression stutters along as the dense downtown setting and the conventional typology slammed on the design brakes. In Mitte architecture can sadly not float. 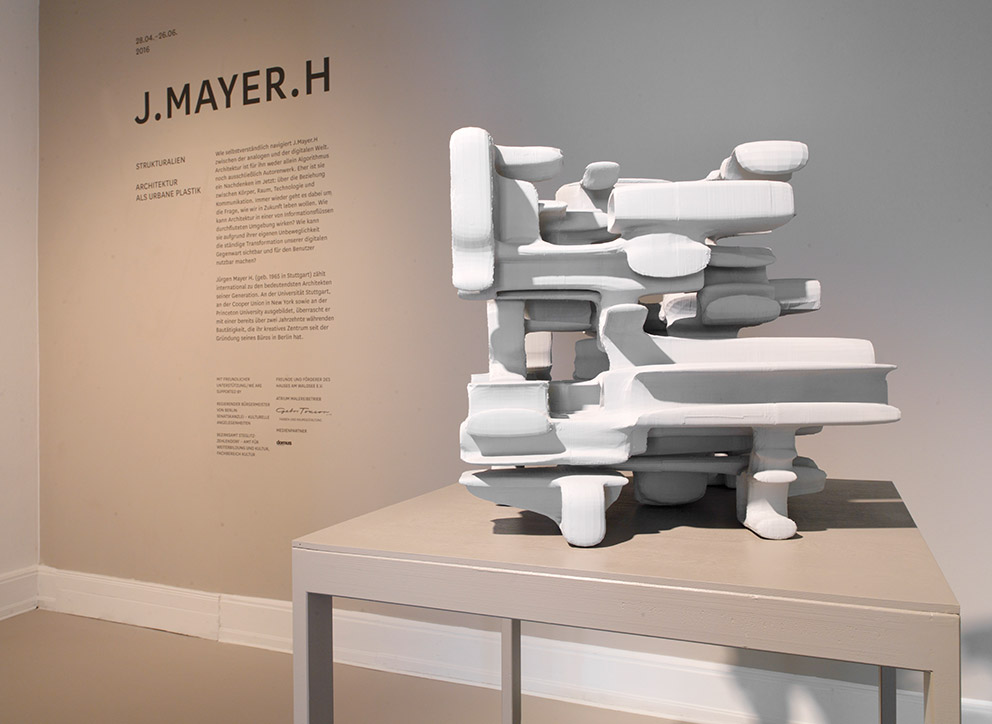 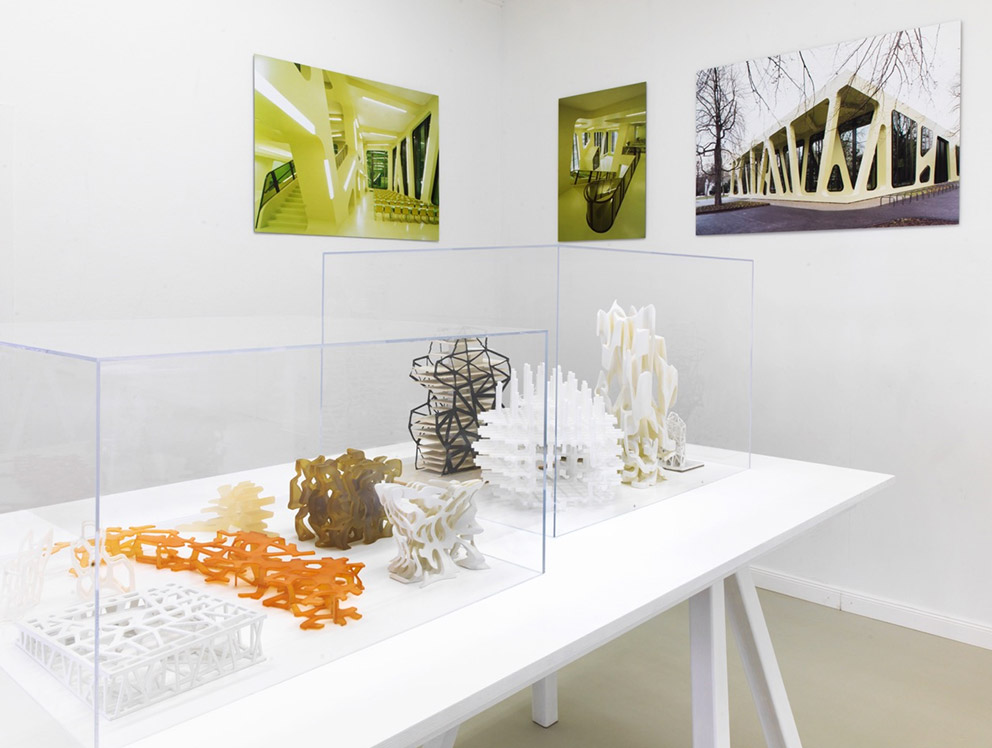 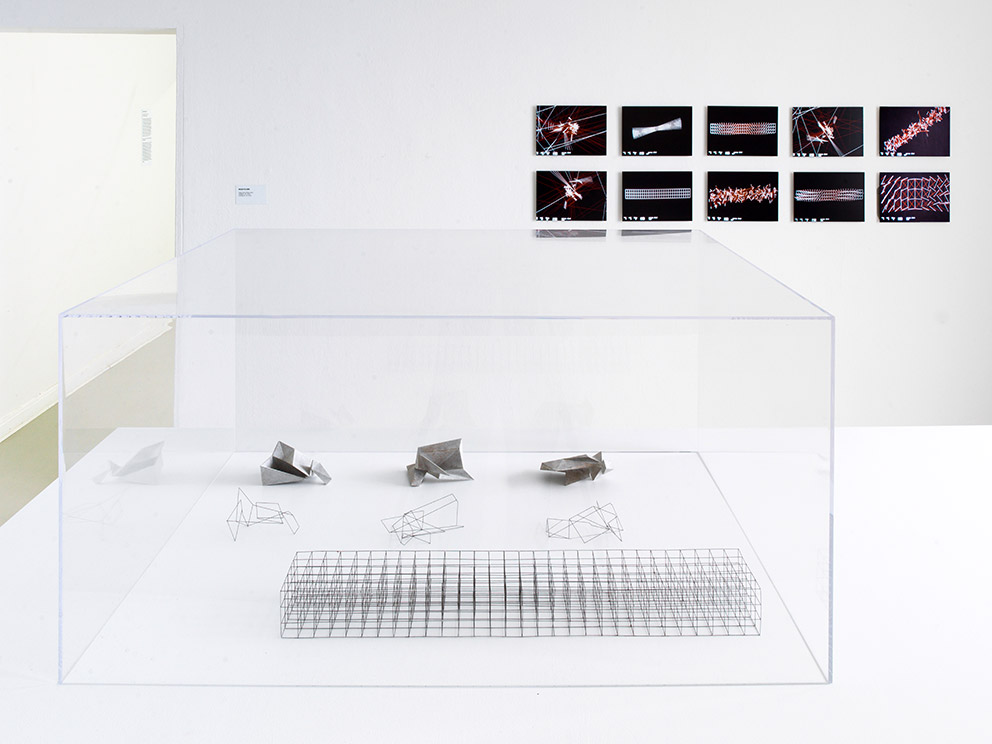 The “Noah’s Ark Project”: study by Jürgen Mayer H. dating from 1990 and already hinting at his conceptual approach; it formed the basis for developing a load-bearing structure.
Photo © Roman März, Haus am Waldsee
Advertisement