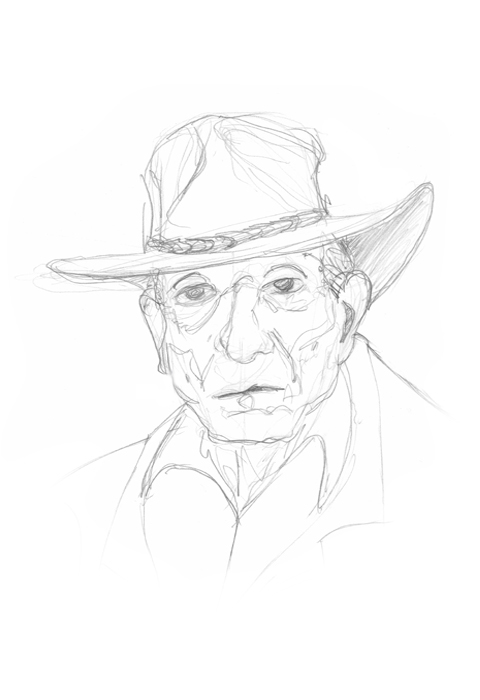 The statements he made were simple. When Deutsche Bahn needed a new logo in 1994, when it replaced the two former state railways Bundesbahn (former West Germany) and Reichsbahn (former East Germany), Weidemann simplified the old brand, which was as old as the age of the steam train. He made the negative type positive and moderately modernized it, making black red. It was no fundamental change, but one that ensures the Bahn logo's legibility in the age of copiers and the Internet in all sizes and applications. "There is as little to be fundamentally reinvented in typography as in cooking or in bed," maintained Weidemann. When his client asked him about the three intersecting colored lines for Bankgesellschaft Berlin (Banking Coperation Berlin), saying, "I take it you ran out of ideas, Professor," he answered, "I am especially proud of this one. You know a logo is good when you can write it in the sand!" Of course, then he had no idea that shortly after the bankers would run their institution into the ground to such an extent that Berlin's public finances are ruined for decades. His logo came to symbolize the scandal, and still does for that matter.

Kurt Weidemann originated entertaining doctrines as others do empty speech bubbles. Even in his typesetting examination he was dubbed "Speedy Gonzales", because he could set 1,400 characters per hour by hand. Weidemann was always fascinated by lettering and language. And, as he said, he had seen too much to be good. That was what made him attractive as a friend and adviser to entrepreneurs and CEOs. "Patiently dismantling the walls of fear to expose the truth," he wrote, "that is what creates profile." His letterhead proudly bore a picture of a jester, leisurely walking along with the king. He was not a yes-man. "Those who, while they are still alive, keep their mouths shut when they should say something or have something to say, are already corpses on call."

Weidemann grew up in poverty. His mother died when he was just eleven. In 1940, at 17, he signed up for voluntary service. "For me, a hero's death was a firmly programmed objective, which I never evaded anywhere without achieving it." In 1943 he became trapped in a bunker, and at times lost the ability to speak. "I would rather have had a hole in me somewhere, that heals, or my arm in plaster." As a POW in Russia, Weidemann worked in a quarry and rebuilding streets. On his return came the greatest contrast conceivable: from gross to fine motor skills. In Lübeck, where he grew up, he trained as a typesetter in 1951. "After working for years out in the open as a prisoner, I wanted a profession with a roof over my head." Weidemann went on to study Applied Graphic Design at the State Academy in Stuttgart, where he held the Chair for Information and Graphic Practice from 1963 until 1983. He was editor of the specialist magazine "Druckspiegel", worked as a copywriter and advertising consultant and later on was appointed president of a number of international associations of graphic designers and typographers. He handed back the commission to redesign the logo of Deutsche Post in the mid-1970s because the company was adamant about replacing the traditional post horn. "The corporate image," Weidemann once said about demands made of logos in an interview, "initially results from a company's own achievements and is not the work of a cosmetic surgeon for graphic design." In 1990 Weidemann reworked the type, color and coat of arms of Porsche. He became friends with Alfred Herrhausen before the latter went to Deutsche Bank. After Herrhausen's murder by the Red Army Faction, Weidemann published the former's typefaces. Through Herrhausen, Weidemann had made the acquaintance of Edzard Reuter and developed for Daimler Benz the font trilogy "Corporate A, S, E", which appears in various forms, sometimes more modern, sometimes more classic.

He designed books and protective covers for clients such as Büchergilde Gutenberg, Ullstein, Propyläen, Ernst Klett, Thieme and Siedler Verlag. He designed a new font for the Deutsche Bibelgesellschaft (German Bible Society) in 1979, originally called "Biblica", then "ITC Weidemann", which both improves legibility and enables more letters to fit on one page. Weidemann claimed that, "this will make people more devout, because they will automatically read more about salvation in the same amount of time." In the late 1980s he fought against "artists who have mistakenly stumbled into our profession," such as Neville Brody and David Carson. "A designer must not force his way between the author and the reader. He must mediate between the two," said Weidemann. He initially appeared to be fighting a losing battle. That said, today Brody and Carson have very much taken a backseat. As early as 1967, Weidemann realized that, "Everything that is brilliant or extremely different has at best a short-lived present, but no future. The objective and nature of typography are mutually exclusive." Weidemann published collections of his most entertaining mnemonics, speeches and interviews in several books. His textbook "Wo der Buchstabe das Wort führt" (Where the letter leads the word) documents his work and encourages young designers, whom he also taught at various universities. He recovered from a heart attack editing his war diaries: "Kaum ICH" (Hardly ME) is the name of the book published in 2002 on his 80th birthday. Kurt Weidemann, born in 1922 in Eichmedien, Masuria, died on March 30 in Sélestat, Alsace. We will miss his sharp, quick-witted nature, and his insistence on the tried and tested, where it is appropriate.