“That’ll be the end of the German Werkbund!” exclaimed one State Chairman when in the mid-1990s Regine Halter, at the time director of the Werkbund’s national association, chose a Stefan Wewerka table for the center of her office. And the table did indeed manifestly lack the one or other property otherwise considered a hallmark of “good form”. It was as asymmetrical as a kidney-shaped coffee table, that epitome of Modernist kitsch, it was a standalone and not part of a system, and you could not immediately figure out how to open the storage compartment. And worst of all, it had been dreamed up by a designer who, although he had studied architecture, was also active as a painter, graphic artist and sculptor, while likewise designing clothing and furniture that was as functional as it was fashionable, and still finding time at the then Werkkunstschule Köln to teach students the importance of cooking as a means of understanding time, materials, tools and procedures. The table was a classic design by Stefan Wewerka who was born on October 27, 1928 in Magdeburg and died on September 14, 2013 in Berlin.

Anyone who has been active in so many fields was inevitably regarded by those blinkered by an addiction to pigeonholing as an amateur – and that Stefan Wewerka quite literally was, for he loved all the different sides to designed shapes. Which is probably why he created objects that while adhering to DIN standards definitely did not comply with the traditional norms of taste, and which were as inspiring as this desk – its enthusiasts love the fact that it has no hierarchically emphasized narrow rectangular sides nor did it fake some merely postulated formal equality of all the knights at the round table, and instead opted for exciting communication, for different positions and meanings, without championing one in particular.

Such an open approach to an object was typical of Wewerka. He grew up in a family of artists, and at an early date was influenced by the organic architecture of the likes of Hans Scharoun and in 1946 first caught the eye with the Eichkamp students village he set up with fellow undergraduates in Berlin. In the immediate aftermath of the war, Wewerka prioritized simple materials that were unconventionally processed, with improvisation and bricolage playing a strong role. The undertaking led to CIAM, the legendary association of modern architects founded by von Le Corbusier and Sigfried Giedion, where Wewerka was among the initiators of a group of younger architects who sought to combat the ossification of modern architecture – the “Team Ten” with included Aldo van Eyck, Alison and Peter Smithson et al. As a visiting professor in St. Louis he experienced first-hand the failure of a formal brand of Modernism that ignored human needs: the demolition of the award-winning “Pruitt Igoe” estate, the demise of which heralded the emergence of postmodernism in the USA.

Yet Wewerka wanted nothing of a postmodernism that was content to be decorative, to beautify. Instead, he created provocatively asymmetrically distorted architectural monuments, thus pointed his finger at an understanding of culture that eschewed content and preached hollow sublimity. And it was provocation that encouraged him to focus on furniture. He reconstructed a customary wooden chair in foam, which while sacrificing stability gained individuality. In the 1980s, this and other artful exercises resulted in him working for Lauenförde-based furniture maker Tecta. By the time the collaboration with Wewerka started headed by Axel Bruchhäuser jr. the company had made a name for itself with interpretations of Bauhaus classics that were obsessed with detailing. When Wewerka came on board it marked the beginning of the era of asymmetries: A combined cupboard/shelf unit that could also be used as (filing) steps, angular sofas, a chair that reflected the sitter’s search for movement and allowed you to sit in various different ways, not to forget the Wewerka Pavilion that stole the show at the Documenta. Heinrich Klotz, founding director of Deutsches Architektur-Museum in Frankfurt, once euphorically commented on the collaboration (it included jackets you could wear inside-out, other chairs, the legendary kitchen tree which combined leads, pipes and uses in a single functional unit very much à la Buckminster Fuller) that what Bauhaus had really needed was a company like Tecta. The crowning product of Wewerka’s work for Tecta was a cantilever chair made from a single piece of bent tubular steel, supplemented by a seat and armrests. That said, Wewerka did not cease in his efforts and instead brought architects Alison and Peter Smithson together with Tecta, without which the Smithsons’ late works would have been inconceivable, such as the conversion of the Hexenhaus in Bad Karlshafen complete with tiny lookout hole, and the Kragstuhlmuseum in Beverungen – an ongoing magnet for anyone interested in the history of modern furniture.

In his final years, Wewerka’s oeuvre received the recognition it so deserved. Museums in Frankfurt and Hamburg hosted solo shows on his life and work, while the publishing company run by his son Alexander brought out a monograph and DVD on him, presenting architecture, art, designs for the body, for rooms and for surfaces. Design history knows of but a few such all-rounders: Le Corbusier, Richard Buckminster Fuller, Max Bill or Charles Eames. Stefan Wewerka was perhaps the last one in the list. 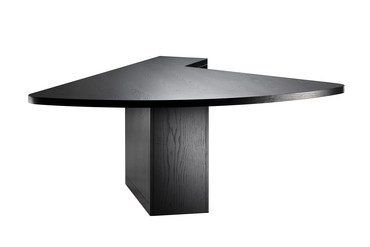 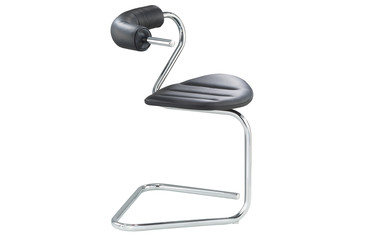