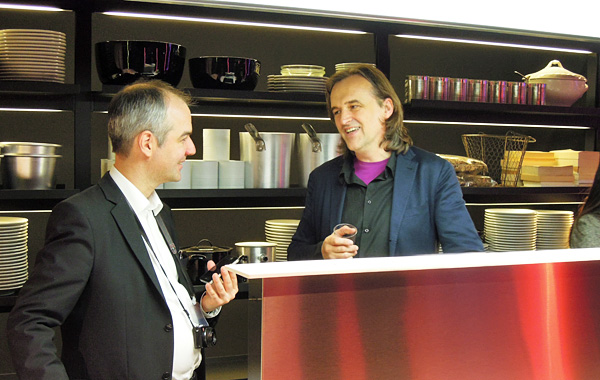 Thomas Edelmann: How did the project for your latest kitchen, the "k20" for Boffi come about?

Norbert Wangen: It was meant to be a kitchen that was handles-free, not only for aesthetic but for functional reasons too. If you look at the facings you see nothing at all. No handles, no links, simply pure surfaces. The trick here is that the doors are set slightly behind the line of the worktop, so you simply pull the door. I originally had the idea eight years ago when I was busy preparing the Boffi "k11" for production; the design for the "k20" simply didn't fit the bill back then. I kept on suggesting the idea until two years ago Boffi MD Roberto Gavazzi said that he could still remember the project and that he still liked it. So we simply took it up and moved it forward.

How did your idea evolve?

Wangen: In the meantime we have also added a special rear wall that originated in professional kitchens. The kitchen now offers a quite unique combination of functionality and aesthetics. If you look at it from the front, it's very clear and uncluttered, while from behind it resembles a functional machine. The flaps serve to conceal there are sockets and lighting. The air extractor is integrated into a thin pane that extends powered by a motor. As you can see, the future is definitely not all about iPhones. Moreover, the kitchen comes equipped with especially efficient Scholtès gar burners.

My grandmother would find it irritating that you can snag your finger in the doors. And I mean big time.

Wangen: Not really, as your grandma would only have done so once, and then she'd have learned. And she would have enjoyed the advantage that when using the worktop nothing can run off and get lodged in some crack or other where you'd never be able to clean. It doesn't matter whether it's bits of dough, spilled gravy, or a glass that's been knocked over: It all stays on the worktop, which itself is easy to clean.

How did you manage that?

Wangen: Quite simply: there's a wraparound frame that goes right round the top. Protruding edges are something you encounter often in bars. The small edge used here protrudes over the door at the front.

And so what's the advantage of the kitchen's rear wall with its rather mechanical look?

Wangen: The countertop is also has a perfect finish at the back. You can simply place the kitchen free-standing in front of any wall, even in front of a curtain. It doesn't need any kind of infrastructure at the back; there is no need to prepare the wall beforehand, move sockets or anything like that. All of this is integrated into the kitchen rear wall, and being free-standing it doesn't require any kind of supporting structure either.

There is a kind of professionalization taking place; the kitchen is merging with the living space. How are kitchens changing, what will happen next?

Wangen: The theories that we advanced a decade ago now still remain relevant and accurate today. Just because in today's world we tend to trade in our gadgets, our smartphones, our laptops, for a new model at the latest every two years, we now have the feeling that the world is in constant flux. But social changes happen at a much slower pace. It still makes a lot of sense to enhance things we already have even further. Originally design was by no means a matter of allowing products to age as quickly as possible, but it was about making a product, in which the creator has channeled his own intelligence, and which can be continually enhanced and improved. It is a common misconception that the design process consists in making a sketch, using this to create a mass product, in order to then sell it and throw it away even faster.

What are you doing to combat that?

Wangen: I myself take an effectively conservative, more preservative approach. Things that possess a certain quality in particular maintain their high appeal factor even once they have long forfeited their original function. They then continue to accompany us as an object of inspiration. This idea was addressed in the Boffi showroom, where they took a few old objects, warts and all, and juxtaposed them with the newest kitchens and bathrooms.

Now a rather common decorative principle. And what does this mean for your own work?

Wangen: I personally consider a certain slowness to be highly appropriate in this context. The "k10" was presented a decade ago. Such developments should be pursued in peace without disturbance, improvements made bit by bit. It is for this reason that we won't be presenting an innovation of a similar magnitude next year too.

Norbert Wangen was born in Prüm in the Eifel region in 1962 and went on to study Architecture at the Technical University in Munich. Today, his foldable elmwood armchair can be seen in both the Neue Sammlung and Vitra Design Muesum. While fitting out his apartment in Munich-Schwabing in 1995 he designed the first kitchen with a laterally extendable countertop. Minimalist and compact at the same time, it became a model for a new, open style of kitchen design. In 2000 it was launched at furniture fairs in Cologne, Milan and Chicago under the product name "K2". Wangen, who in 1998was declared one of the 100 best interior decorators and designers by German trade magazine Architektur & Wohnen, presented his next model, the "k10", in 2002 complete with a new folding and ventilation system. In 2003, the Norbert Wangen brand was taken over by Italian kitchen and bathroom manufacturer Boffi. Since then, Boffi has released several sensational kitchen and bathroom concepts designed by Wangen. This year in Milan, he presented the "k20" kitchen, available in stainless-steel or Corian variations, as well as bathroom modules "b20" and "b21". 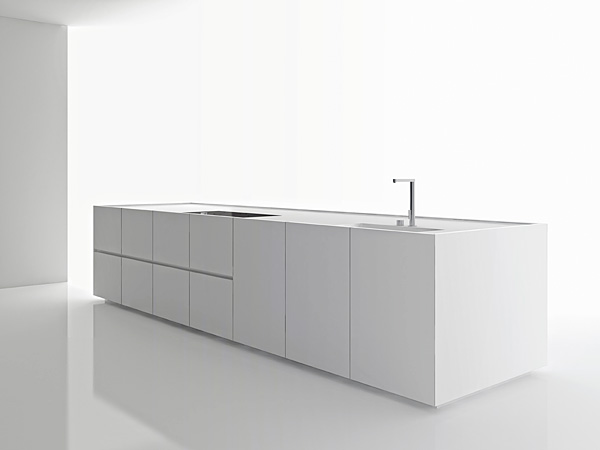 “k20” kitchen designed by Norbert Wangen with doors and countertops made of Corian, photo © Boffi 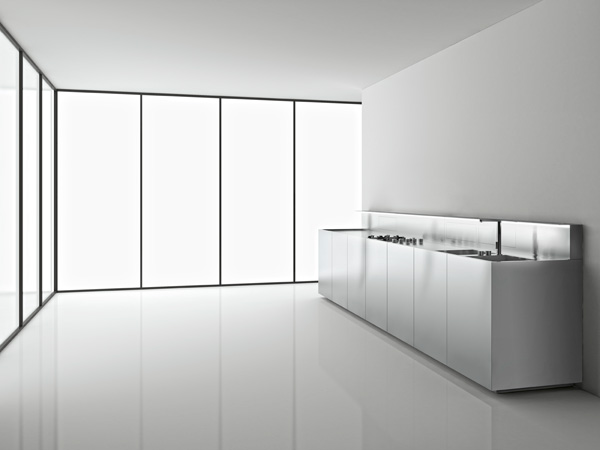 “k20” kitchen by designed Norbert Wangen with doors and countertops made of stainless steel, photo © Boffi 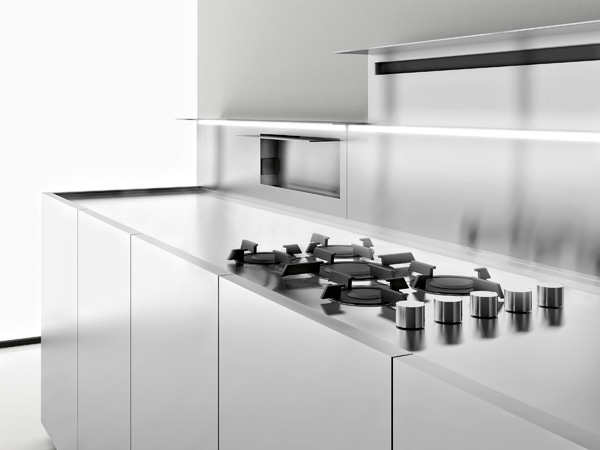 The longer doors frame the countertops, preventing things from falling on the floor, photo © Boffi 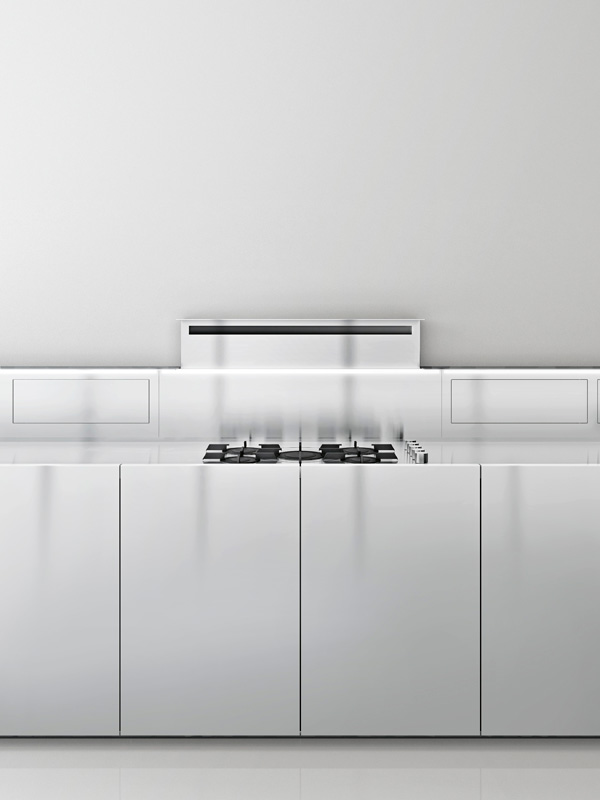 The handle-less façade of the “k20” kitchen makes for a clean, consistent surface look, photo © Boffi 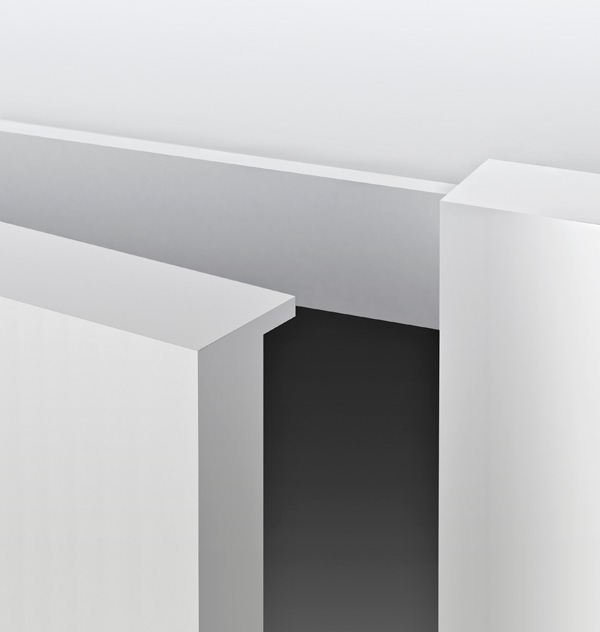 The “k20” kitchen’s doors protrude up above the countertop’s surface, allowing the user to open them despite the absence of handles, photo © Boffi
Advertisement