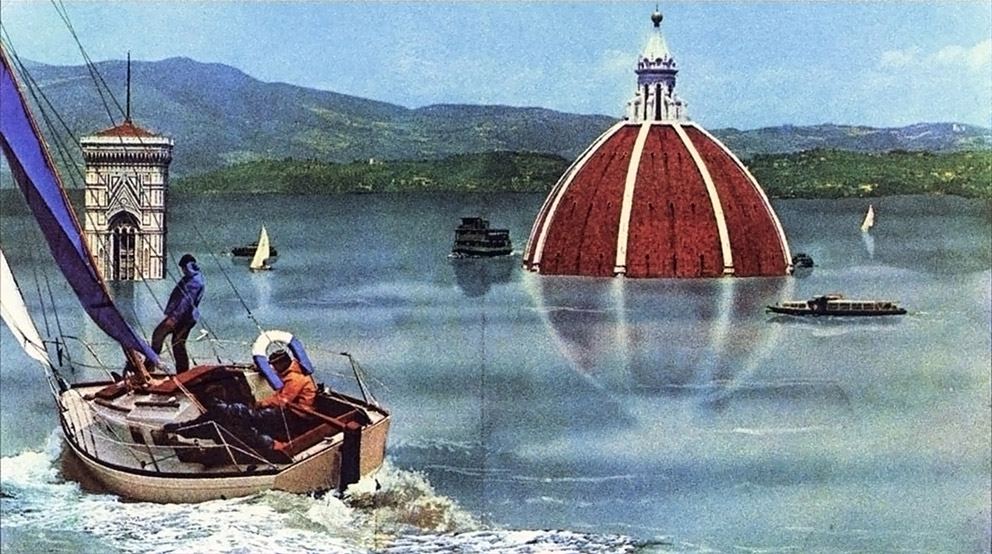 It is November 4, 1966, and Italy is in a state of emergency. Severe flooding has brought most of the country to a standstill and Florence, where for weeks the architecture students have been expressing their dissatisfaction, is especially hard hit. For two days the water bursts the Arno’s banks and streams through the streets, creating an inconceivable amount of damage. The proud city is inundated in mud and waste for months.

Anyone with those images in mind will enter the exhibition marking the 50th anniversary of the foundation of Superstudio, currently on show at the Maxxi in Rome, with a different eye for things. As the revolutionary architecture collective, feted until today for its visionary works, formed shortly after the flood in Florence – its members drafted from the incensed students who suddenly saw themselves confronted with the harsh consequences of a natural disaster. These extraordinary circumstances can undoubtedly be attributed to the leftist political awareness and the scenarios of possible (natural) disasters that henceforth formed the key parameters of Superstudio’s efforts. 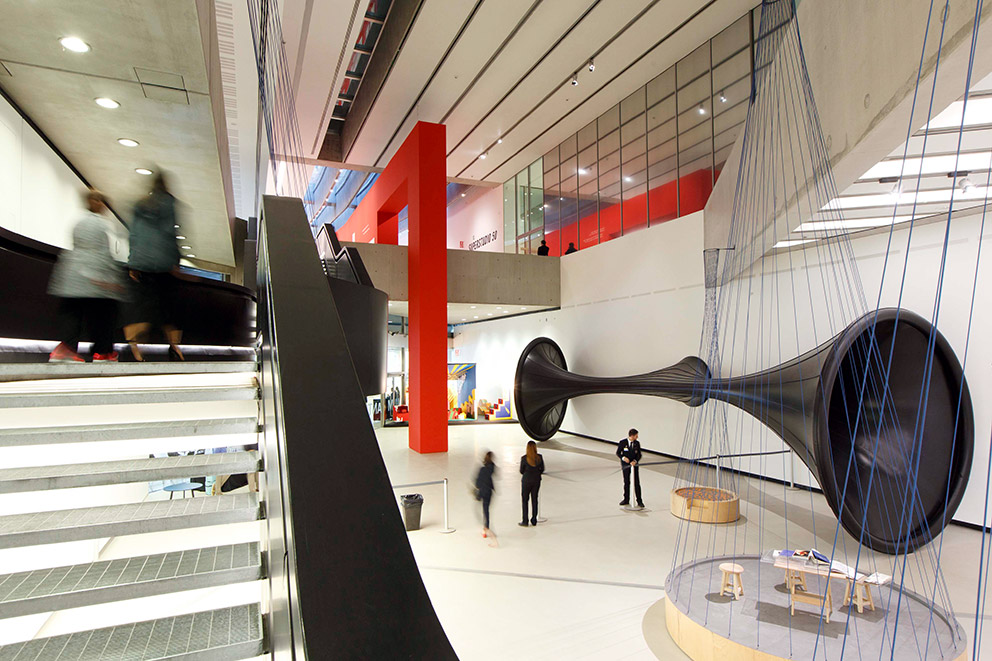 The “Superstudio 50” exhibition at the Maxxi in Rome is probably the most comprehensive show of the group’s output to date. The striking “Red Wall” helps visitors grasp the unity of the chronological sequence that runs from the fluid foyer and up and down the stairs in the museum Zaha Hadid designed. Photo © Fondazione Maxxi

Architecture as an instrument of critique

One month after the flood, still in 1966, in Pistoia outside Florence an exhibition opened called “Superarchittetura”. Here, Superstudio together with their long-term collaborators Archizoom presented their unprecedented critique of Modernist architecture and put forward a highly colorful, organic interior as an alternative idea of a future collective living. With their interdisciplinary approach to the subject, oscillating between anthropological studies and political intervention, to this day Superstudio’s oeuvre can be considered a revolutionary re-definition of the methods, strategies and approaches of architectural practice. Gabriele Mastrigli, who curated this retrospective along with the Superstudio members Adolfo Natalini, Cristiano Toraldo di Francia and Gian Piero Frassinelli, writes: “The visions of Superstudio are rhetorical expedients used to demonstrate, ad absurdum, the possibilities and the limits of architecture as a critical instrument of modern society. In the collages and the drawings, in the installations and the films, what we learn from Superstudio is that architecture is not merely an object, but a way of thinking about the world.”

To this extent it seems rather unfortunate that the works by this group, which was political and discursive and less interested in the object itself, are being displayed in the Maxxi building. Molded by the master of shapes Zaha Hadid, the curved and L-ish-shaped concrete sculpture located in a former military complex is as it were the very opposite of Superstudio’s ideas—parametric and apolitical. Nevertheless, what is on show in Hadid’s strangely bent interiors impressively underscores how fresh the effect of the group’s work still is. “Superstudio 50” not only serves up a retrospective on the works of the masters of architettura radicale, but also has a new piece by the group to offer as a kind of reunion, such as one tends to encounter only when old Rock stars get together again: “Red Wall” is an impressive intervention that successfully counters the effect of the parametric architecture, but at the same time serves as a helpful and functional guidance and display system for the exhibition.

Superstudio is known above all for its striking visual language and works in different media. Thus the exhibition is full of objects, collages and walk-through environments, which far exceed what you would normally expect of an architecture exhibition. The curators have assembled over 200 in part unpublished drawings and collages, items of furniture, publications, films and temporary installations to elucidate Superstudio’s critical inquiry into architecture, which resulted in political art. 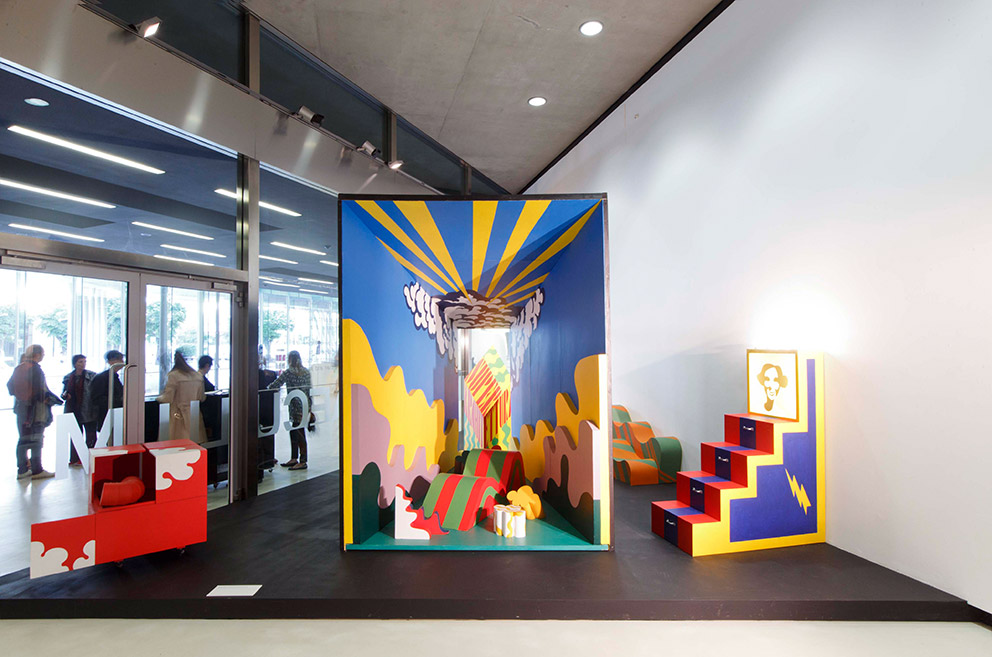 How it all started: In the Maxxi entrance lobby you immediately encounter a reconstruction of the brightly colorful 1966 “Superarchittetura”. Photo © Fondazione Maxxi

The chronological structure to the exhibition takes the visitor along on the emancipatory journey that Superstudio has itself gone through since it was established. The reconstruction of the first exhibition “Superarchittetura” (marking the group’s foundation date) stands somewhat forlornly in the entrance, but once you reach the main hall on the first floor, walk up the stairs built to run over the room and along the red monument you will find yourself gradually immersed in the world of Superstudio’s ideas.

The path through the exhibition reconstructs the development of Superstudio’s politicizing architecture as a response to the increasing politicization of Italian society in the 1960s and 1970s. It starts with joyful, colorful and organically shaped furniture designs such as the marvelous cloud-luminaire “Passiflora” (1967), which, fully in keeping with Pop Art, defies the gloom of flooded Florence. Yet the soft colors and round shapes subsequently disappear in favor of a rigorous Cartesian grid on a hard, white grounding. Visitors become witnesses to how the “Istogrammi” from the “Misura” series give rise to the countless collages of the “Continuous Monument”, the Superstudio series of works that is no doubt best known. In the course of 1969 smaller objects that as white monoliths covered by a black grid perhaps denote houses, tables or stools morph into ever larger, ever more powerful structures that at the end extend across the cities and countryside of our world. 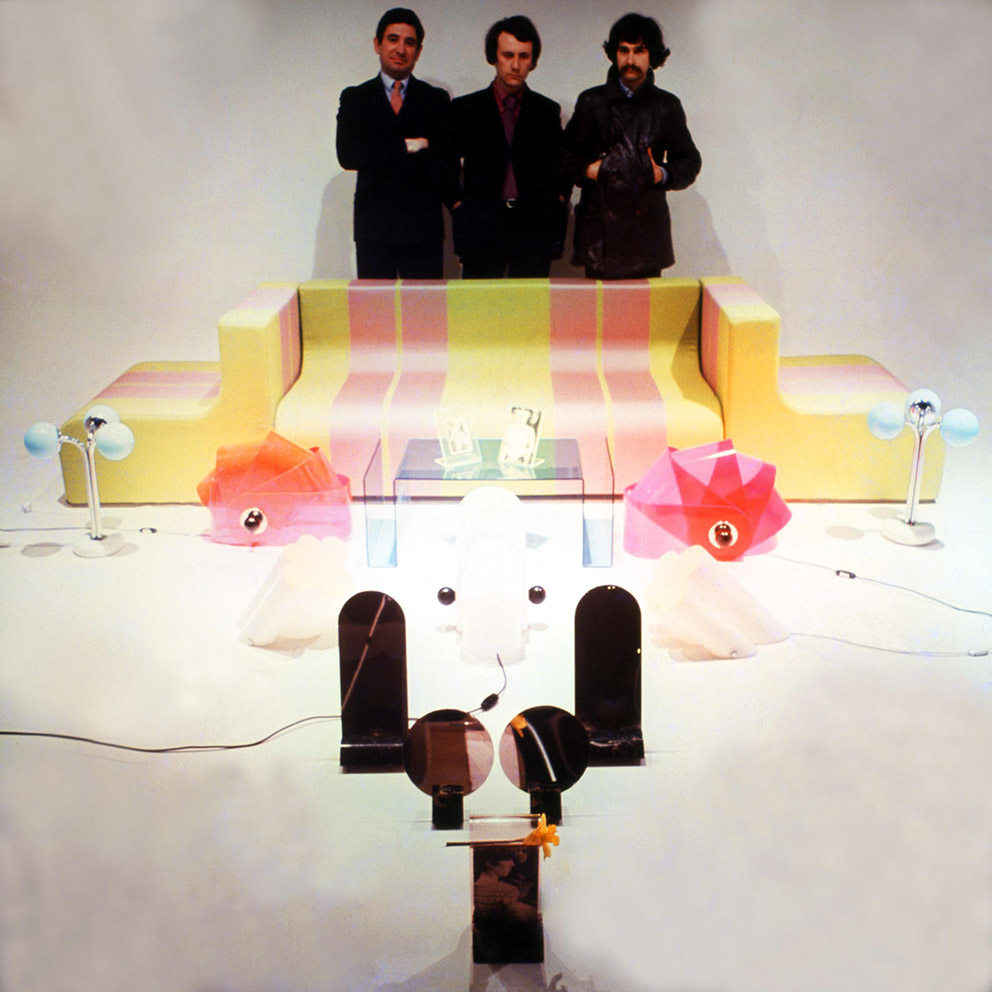 Roberto Magris, Adolfo Natalini and Cristiano Toraldo di Francia of Superstudio on an ad photo dating from 1968 with their designs for Poltronova. Photo © C.T. di Francia

The dissolution of architecture and the attempt to create a second nature as architecture leads among other things to the powerful images that form the narrative of the “12 Ideal Cities” (1971). Humanity is now the victim of architecture; this is the dystopian description of a “man-eating urbanism” in different, funny and ironically illustrated horror and sci-fi variations. This also includes a reconstruction of the environment “Supersurface – An Alternate Model of Life on Earth” from the famous MoMA exhibition in 1972 “Italy: The New Domestic Landscape”. The mirror cube is just as impressive today and could be read as a contemporary critique of a fully digitalized world devoid of physical human references. Further on, one of the group’s simplest and perhaps most beautiful pieces is on display: “The Wife of Lot”, a series of basic architectural shapes (cylinder, cube, block, etc.) created for the 1978 Venice Architecture Biennale. They are made of salt and slowly dissolve as water drips onto them, just as all human endeavor in this world, and that includes architecture, inexorably dissolves.

The “Fundamental Acts” of 1971-1973 mark a clear shift in the group’s output and in the Maxxi they at long last receive the attention they truly deserve for the first time. You can experience their full poetic depth as meditations on nature/architecture – displayed on five screens as films or storyboards, drawn and in part filmed by Superstudio. 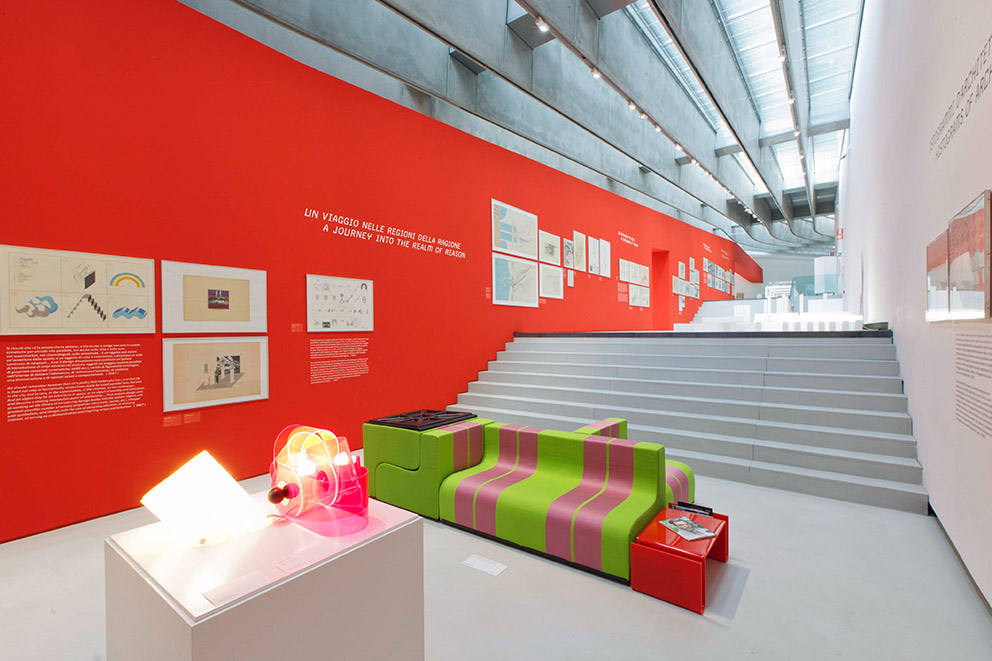 Superstudio super-productive: their repertoire ranged from urban planning studies through future visions to furniture designs –in the foreground a reconstruction of the modular “Sofo” system of 1968. Photo © Fondazione Maxxi

A storm of images

With these screens we leave the Red Wall behind us. The installation turns the complex lobby and the interstices in the Maxxi into a fluid, meaningful route that takes us, as it were, to the end of architecture. In a corridor we now enter a kind of archive, in which the key texts by Superstudio, a quite erratic collection of snapshots, and remarkable photos by Stefano Graziani of the Superstudio archive and a documentary film by Matteo Giacomelli are on show. In the storm of images that Superstudio’s work manages to trigger you hardly notice the fact, but the exhibition with its precise presentation could easily have been more courageous in juxtaposing image and text. For one of the group’s real strengths was how they used words to explain their ideas. 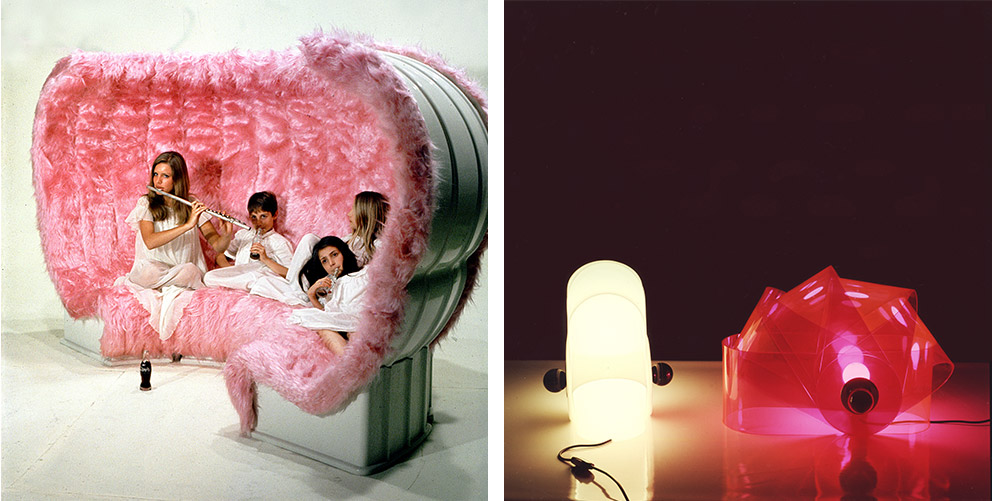 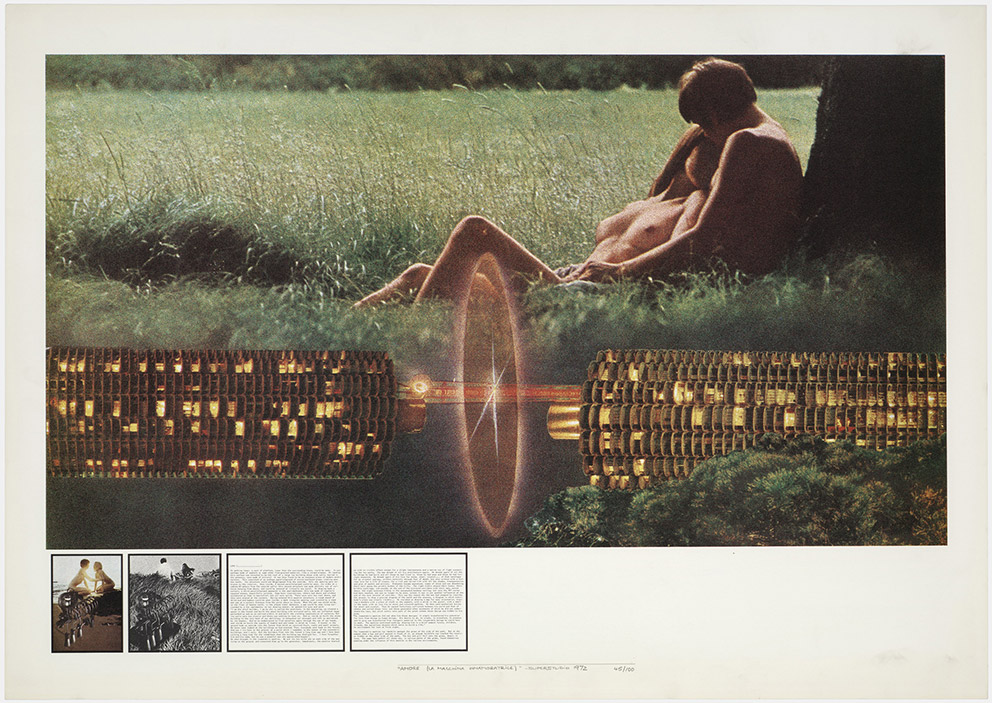 “Amore. La macchina innamoratrice”, created in 1972: Architecture was meant, so Superstudio felt, to refocus on the really important things, and it called for this in the series of collages entitled “Atti Fondamentali”. Photo © Fondazione Maxxi
Advertisement