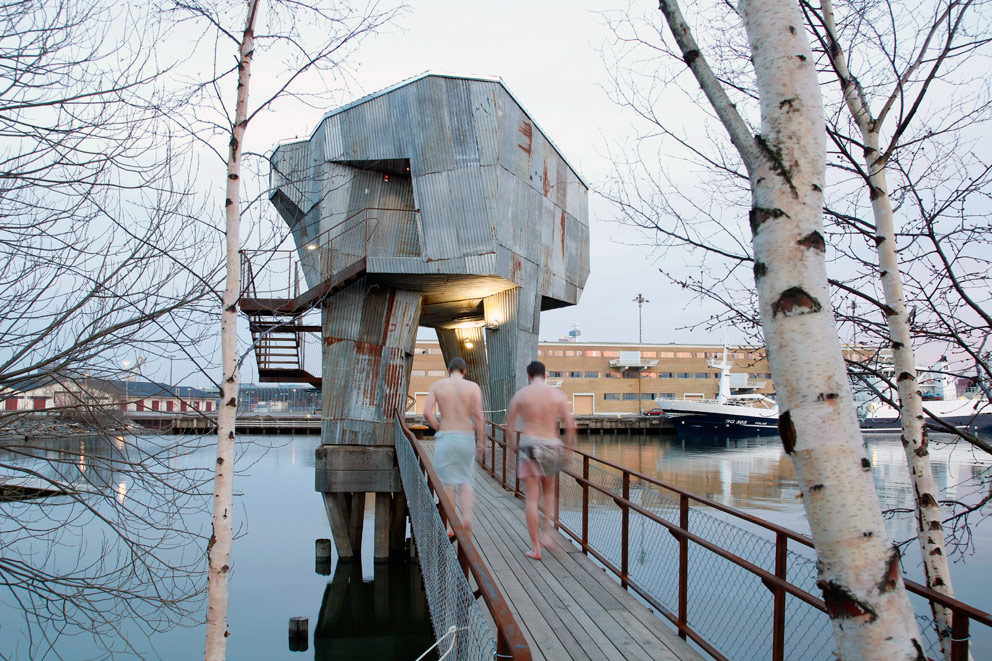 The Berlin architectural office Raumlabor has built a sauna in Gothenburg’s Freeport, which may remind one of the other on an "AT-AT" from Star Wars. All photos © Raumlabor

One widespread cliché is that the sauna is as much a part of Nordic life as beer tankards are a part of life in Bavaria. After all, sweating together or drinking together can foster friendship or business. In fact, the mega-deals of the Romans Empire are said to have been brokered in the seclusion of steam baths. A typical sauna, or so the cliché would have it, is a delightful little wooden cabin and stands at best next to a deep lake, and at the very least is flanked by a glorious pine forest.

The sauna tower in the harbor basin at Göteborg’s free port (“Frihamnen”) was designed by Raumlabor and has just about nothing in common with Finnish lakes or romantic Swedish hideaways. Instead, it is reminiscent of an “AT AT” all-terrain armored transporter from Star Wars, which, having been decommissioned has been abandoned at the edge of the harbor basin, already grey and rusty in places. Inside the belly of the edgy beast with its four thick legs are not combat troops – but a sauna space. It is as if the machine had simply stopped in the middle of its tracks during its last patrol.

Like many other Raumlabor projects, this one is again the result of many helping hands (“participation”) and skillful improvisation. The lion’s share of the materials was “harvested”, “recycled” and “upcycled” in the immediate vicinity. Such as the corrugated iron outer walls, the windows in the reception area, and the bottles that serve as “glass building blocks” for the shower cubicles. The sauna space has been outfitted with a sure feel for details: Large larch shingles form a lively structure on the ceiling and walls. And the windows offer a decidedly romantic view of the city and the harbor area.

The building blends well into the weather-beaten, inhospitable surroundings and is intended to stay standing even after the harbor zone has been redesigned to feature swish residences and businesses. After all, the sauna is only one element in Raumlabor’s “River Pool Project” – it seeks to trigger development of the quarter first by introducing a culture of urban bathing and boosting the locals’ acceptance of the new public areas in the district. To this end, a sun-deck, a pool and a sailing school are also on the drawing board. Whatever else your average Swede might wish to see as part of that culture he or she can ponder at length – while sweating away in the sauna. 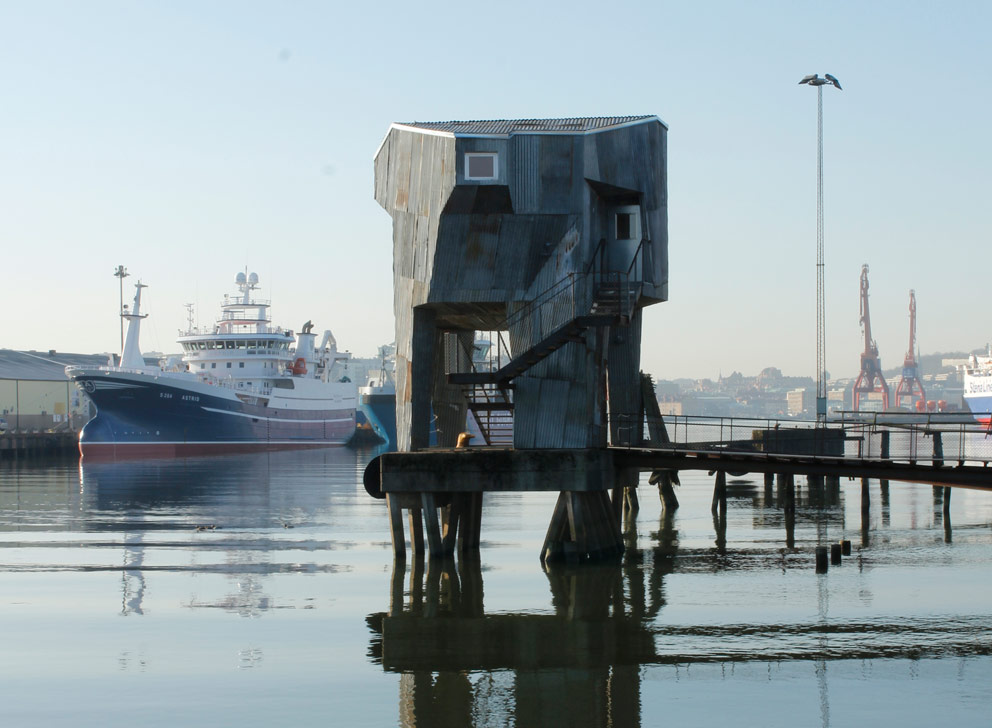 The port will be developed to a residential and commercial district - the sauna is one of the a first steps for this. 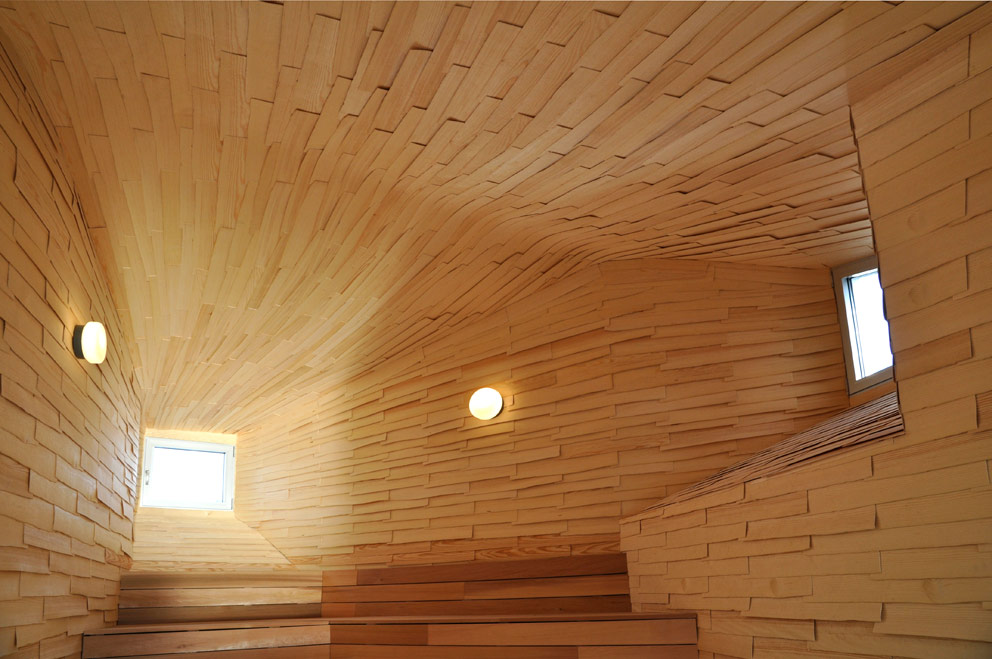 The sauna space has been outfitted with a sure feel for details: Large larch shingles form a lively structure on the ceiling and walls. 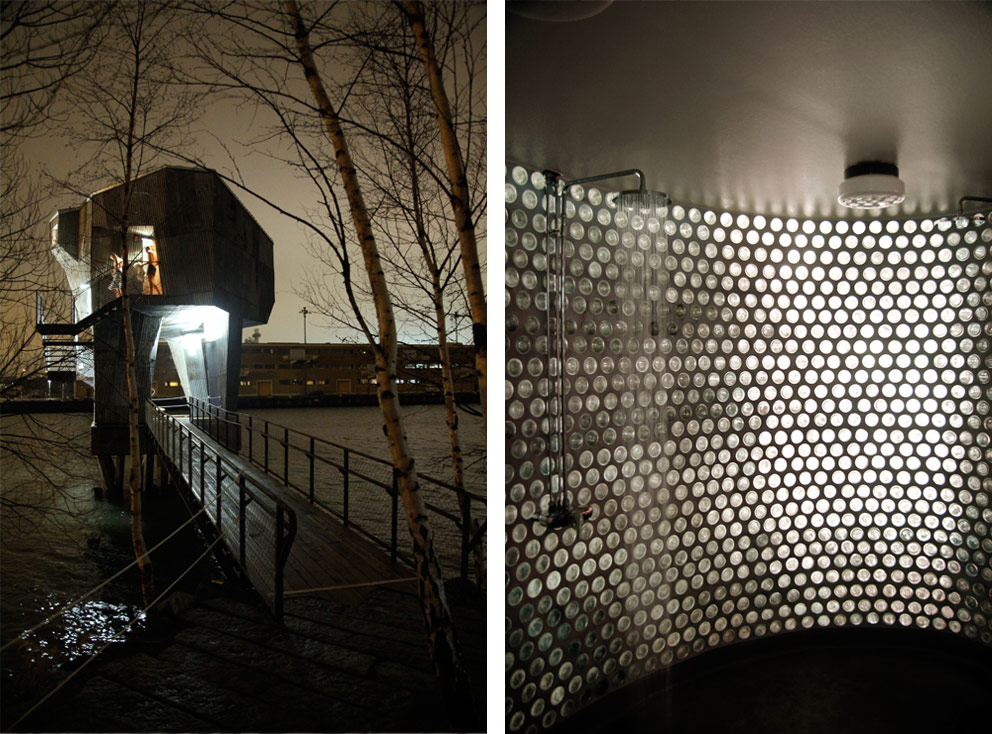 For building materials were "harvested" from areas around, "recycled" and "upcycled": The old pier was re-clad … 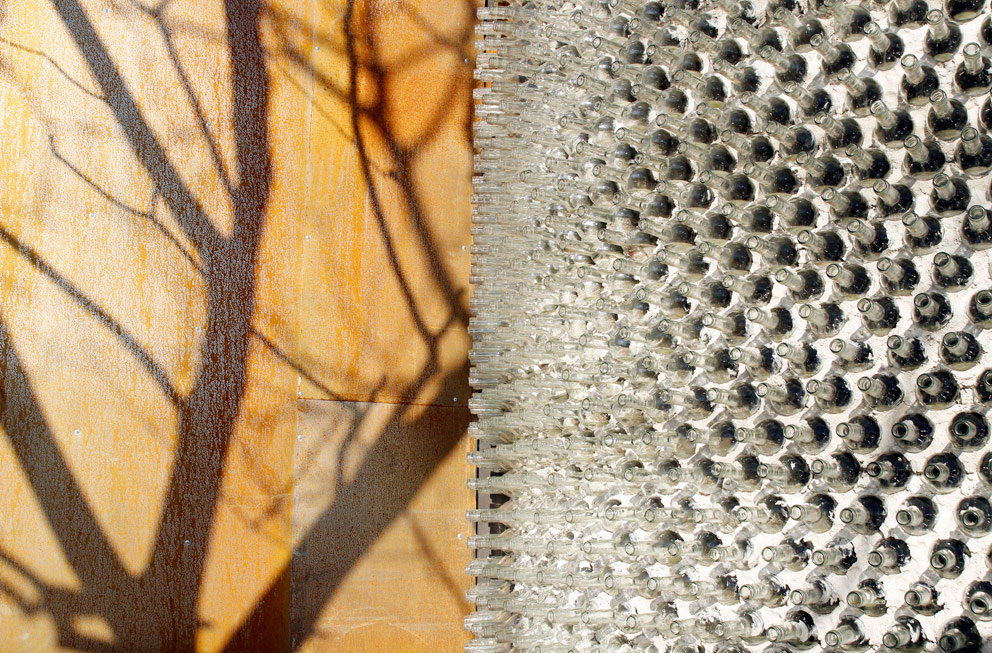 … and glass bottles serve as building blocks for the shower rooms. 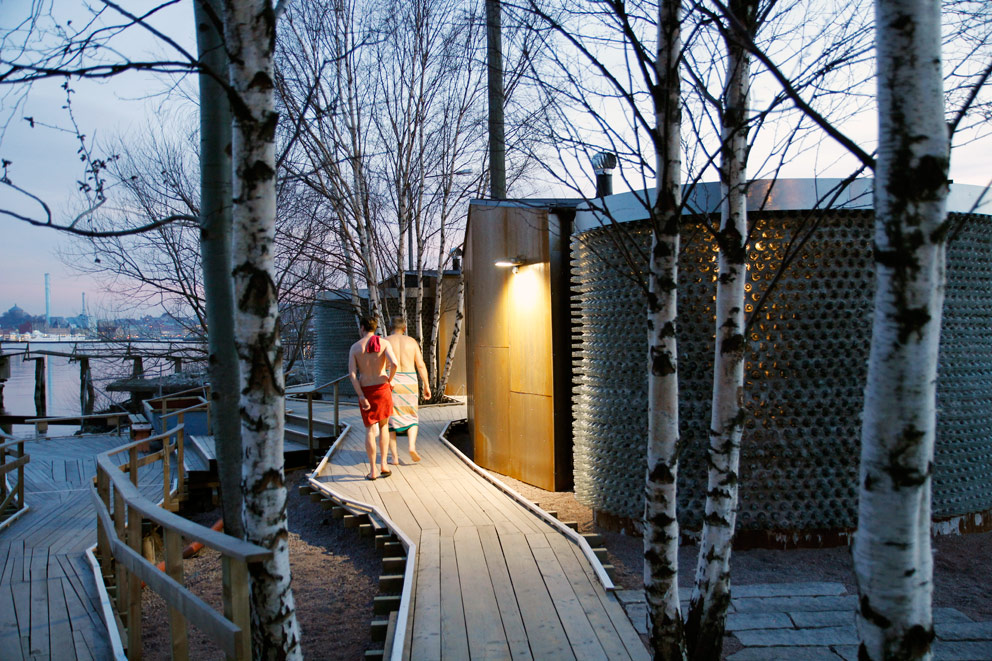 Next to the showers the changing rooms and a small pavilon that serves as a reception are located. 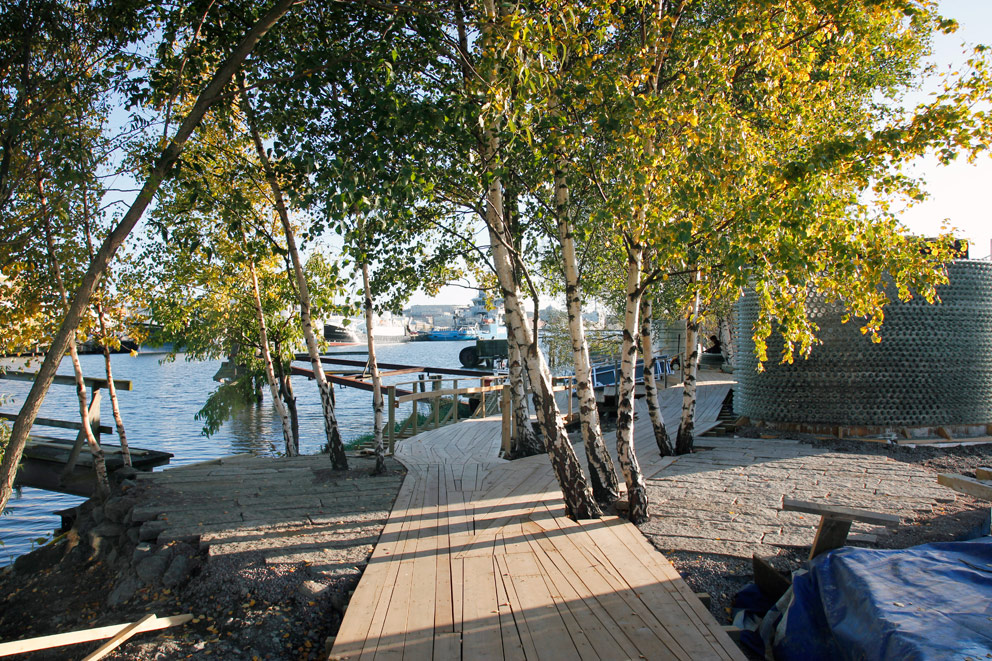 The wooden path connects the new public spaces of the harbor area. 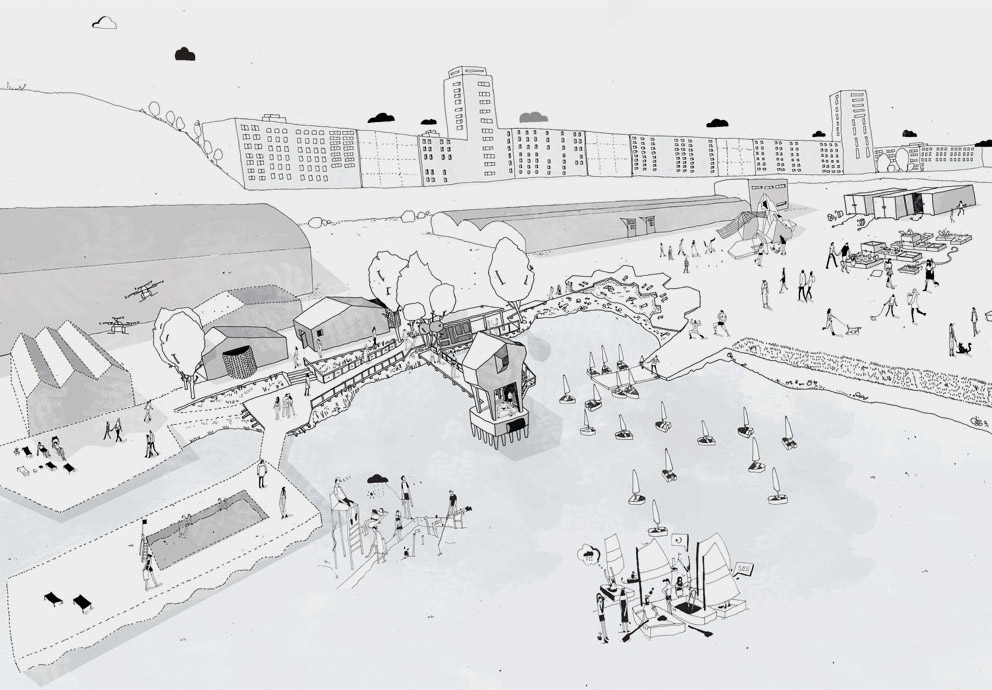 Sun decks, a pool and also a sailing school will be added at Raumlabors "River Pool Projects" yet.
Advertisement